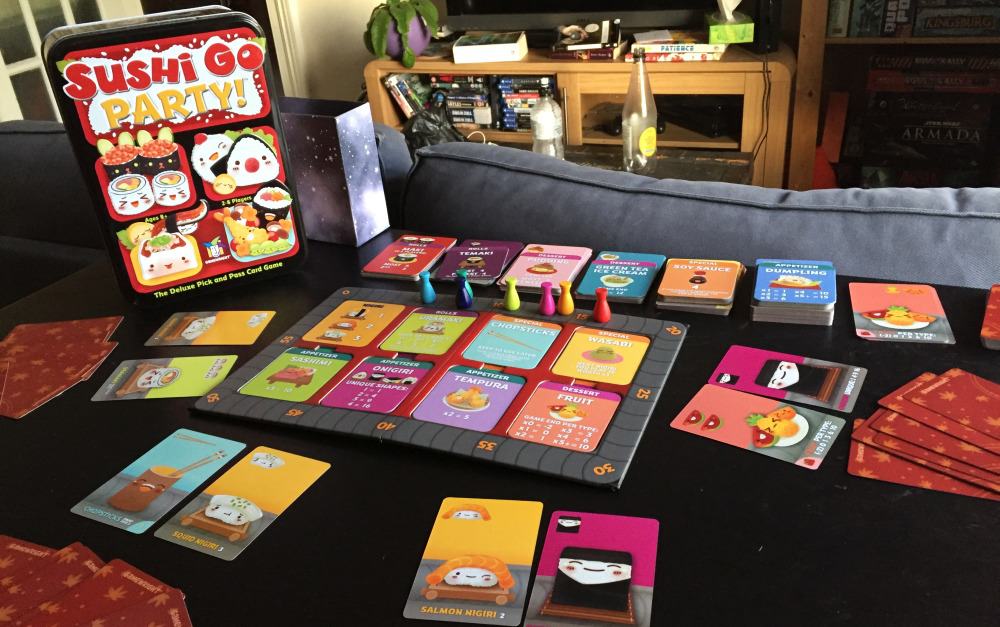 Quinns: Ever since I first squeaked about Sushi Go in my 2015 Corner Awards (and dust off your tux, because I’ll be publishing the 2016 Corner Awards any week now) this little game has become loved by my friends. Throughout this year, at the end of a game night when everyone has the happy-sleepy feeling that comes from digesting two drinks and a big game, and I can’t be bothered teaching Mundus Novus, Sushi Go makes a natural end point for the evening.

More specifically, it’s Sushi Go Party! that we play. This is the enlargened, deluxe-ified version of Sushi Go! that offers all sorts of new takeout boxes, rueful rolls and playful puddings for you to experiment with, as well adding a board and little soy sauce score-trackers. The original Sushi Go was a delicious-looking package, but Party is positively mouthwatering.

But here’s the thing. I’m not sure Sushi Go Party! is as good as other simple, small-box classics you might end a night with, games like Welcome to the Dungeon, Incan Gold or Parade. So why do I keep playing it… ?

It’s a frosty Wednesday, I have a hot cup of coffee and I’m feeling optimistic. Let’s go deep on this one. 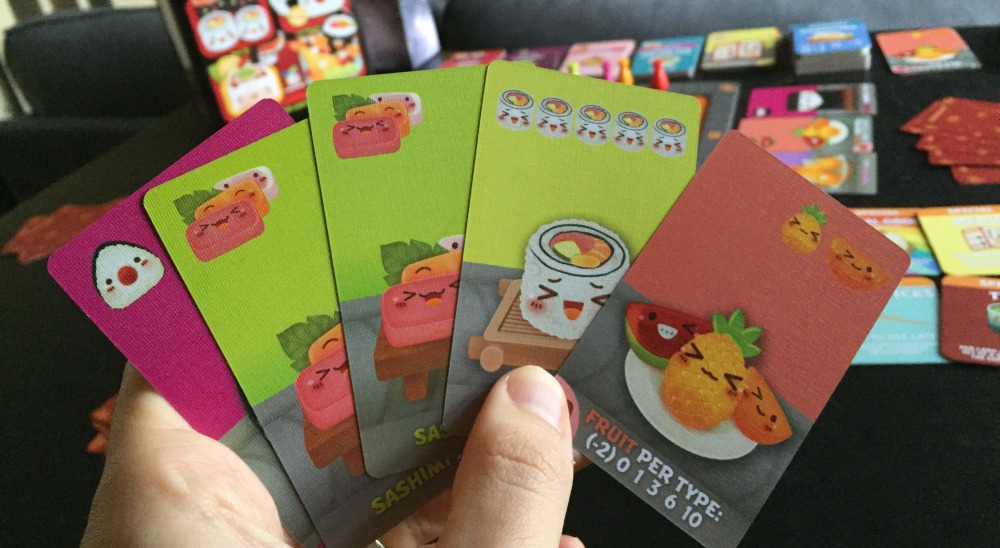 So, how do you play Sushi Go? “Very easily,” for a start.

Players sit around a table and each of you is dealt a hand of cards depicting sushi rolls, tempura, wasabi and so on. Importantly, all of these snacks score points in different ways. Maki rolls give 4 points to the player who gets the most. One tempura card is useless, but a pair of tempura cards is worth 5 points. Each little nigiri card scores between 1 and 3 points, but this can be tripled by wasabi card.

What happens next? Why, you all start snatching sushi off this imaginary conveyor belt.

Each player picks a card, simultaneously reveals what they chose and passes the remaining cards clockwise. As you do this the hands you’re passing around and around will get worse and worse, and eventually the round will end with everyone apologetically giving something useless (or even harmful!) to their neighbour. This mechanic is called “drafting” and it appears in lots of games, most recently in the fantastic Inis. 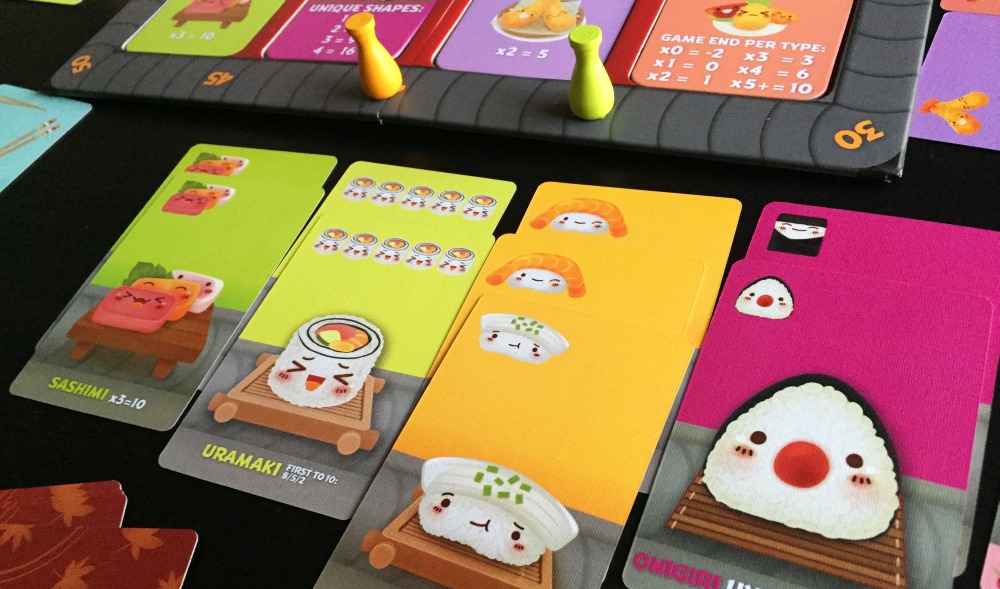 So that’s one round finished. After noting your score you re-shuffle the deck and go again! Once you’re done you do it a third time, although on this last round any dessert cards you’ve been collecting throughout the game are finally scored, giving the status quo a firm, sugary shove.

And that’s it! After just 15 minutes of tough decisions and schadenfreude you have your winner, as well as a table-full of other players ruefully wondering why all you greedy bastards used all the wasabi.

Sushi Go isn’t the most complex or inventive game in the world, but it’s fast, beautiful and plenty entertaining. 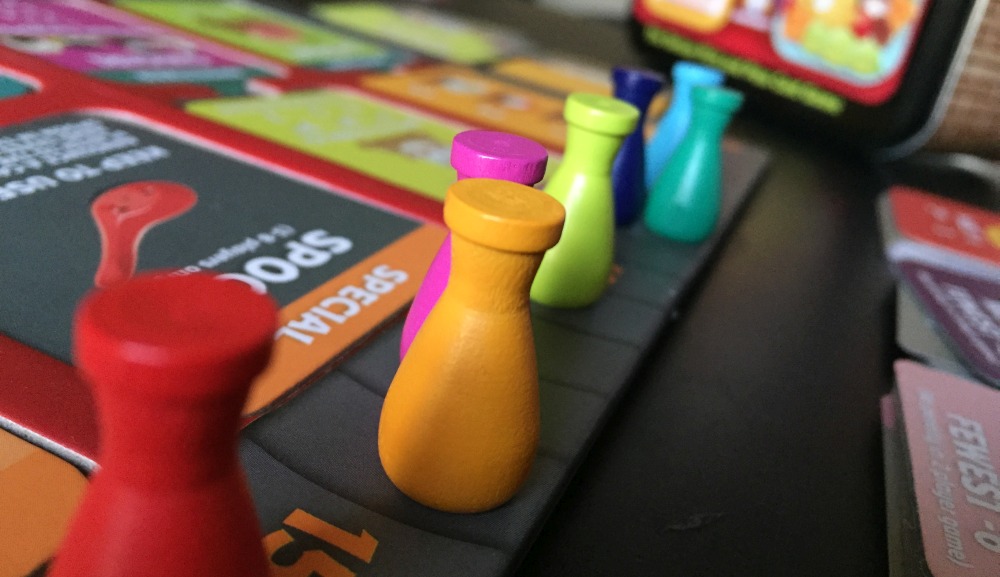 Drafting cards is a mix of calculation and luck, but you can’t help mixing thought into that luck, as if you were stirring sediment up from the bottom of a bowl of miso soup.

No, you have no idea what cards you’re about to be given, but you can guess at – say – the total number of tempura cards that got dealt out. You can also guess how likely your friends are to pick a given card out of their hand, based on its value and your friends’ previous behaviour. And if you can remember cards are in a hand when you give it away and you’re feeling insanely ambitious, you can watch cards leave that hand as it goes around the table so you know exactly what’s coming back to you.

And of course, the card art is so cute. Unless you get the Zoch Verlag edition, anyway. Holy kittens, imagine the conversation that was had at the publisher that resulted in this art! You’ve got to wonder if they hated sushi and also themselves. 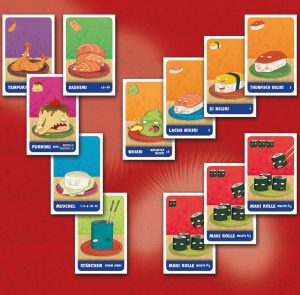 Click for bigger. Look! The sashimi is in some kind of abusive relationship and pudding’s eyeball is falling out.

Moving on, it should be clear, then, that SU&SD considers the Gamewright version of Sushi Go! pictured in this article an easy, happy purchase. The real question, then, is which version should you gget? The original, very affordable Sushi Go! or the new and improved Sushi Go Party!? Ooh, we made an accidental interrobang! I must answer with urgency!! 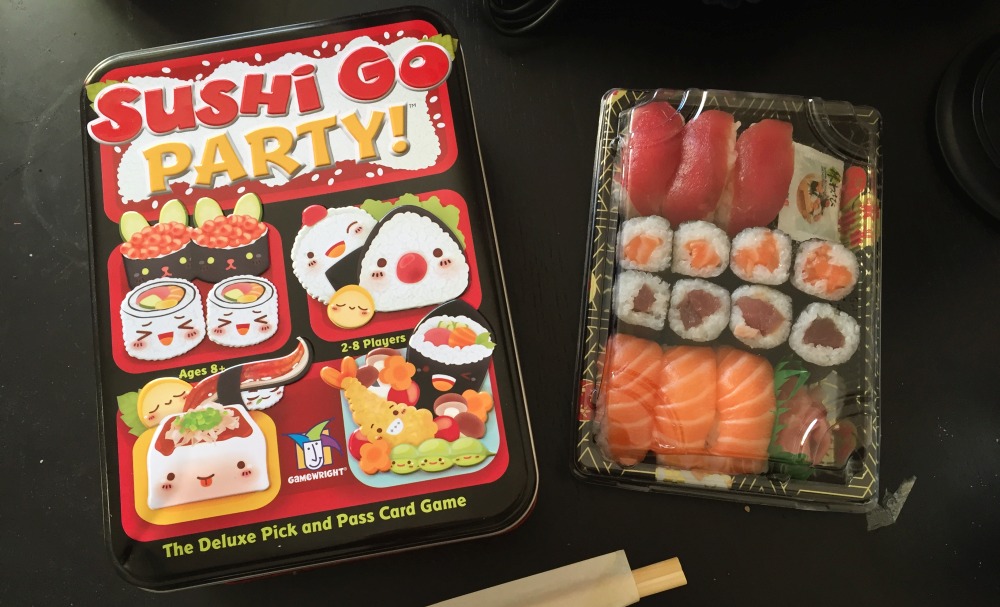 So let’s talk about this new box, depicted with some Standard Reference Sushi that’s been passed down through the Quinns family for generations. For the love of god don’t take off the lid.

Sushi Go Party! definitely does gives you an extra £10 worth of enjoyment. It turns Sushi Go! From a 2-5 player game to a 2-8 player game, adds a little score track so you don’t have to write anything down, and adds 80 extra cards you might choose to play with, each with new rules and ideas.

Being able to change up your menu between games of Sushi Go! is neat, but where Party! really shines is in letting you customise the experience for your group. Whether you’re playing with 2 people, 8 people, aggressive players, people who don’t play board games or wisened veterans who’ve played the sashimi out of Sushi Go!, the manual has a set menu for each of those and more besides. Or you could just experiment and tweak your menu after each game, gradually deducing your group’s preferred flavour of Sushi Go! over tens of games. 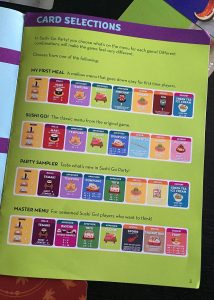 Here are some of those recommended menus. Again, you can click for a bigger image.

Party! is absolutely the better game, but that’s not really a surprise since it’s twice the price. But since it fails to produce any single menu that’s unquestionably better than the original game, there’s no reason not to buy the original, smaller (and therefore more cute!) tin if you’d rather put the £10 you save towards a brand-new game, or if you’re buying Sushi Go! as a gift (and it makes a great gift).

In other words there’s not really a wrong answer. Imagine you were ordering takeout: Just go with your gut! Do you want to get extravagant, or do you want to keep your gaming cheap and cheerful? On the subject, while stock availability of the Party! version in Europe is bad right now, the cost of shipping a copy over isn’t so painful.

But I want to close this us out by talking more generally about drafting. I think a lot of people might dismiss Sushi Go! as an unspectacular drafting game compared to the fat puzzle involved in 7 Wonders or the tidy agony of Inis. But you know what? I think that might be dead wrong. 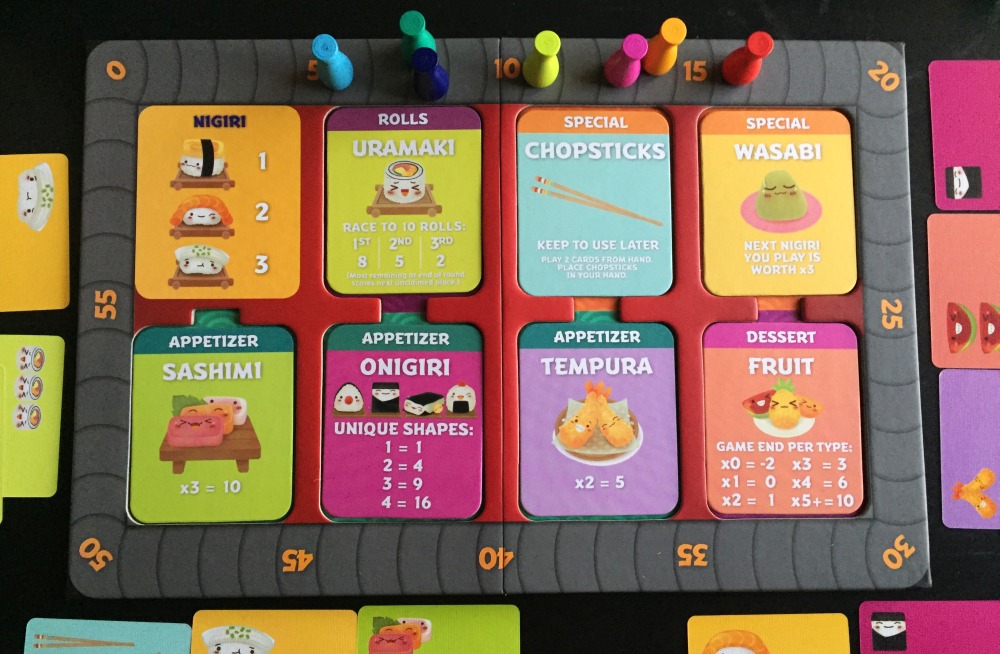 As I threatened earlier: (Inception voice) We have to go deeper.

Let’s think about why drafting’s fun. Ignoring that it offers rapid, simultaneous play, the most obvious answer is that it’s a format for a solid, intractable puzzle. Players have to decide what to keep, what to deny their opponents and guess at what might be coming down the pipe towards them.

But in most drafting games, how often do you really think about all those elements? I had to play Netrunner for years before I felt comfortable with the nuance involved in a draft tournament. Similarly, when you play 7 Wonders, the game has so many different cards and factors to think about that for your first few games you might never think about what cards you’re passing on. You’re playing a fun game, sure, but your highs are coming from a different puzzle than the draft itself. 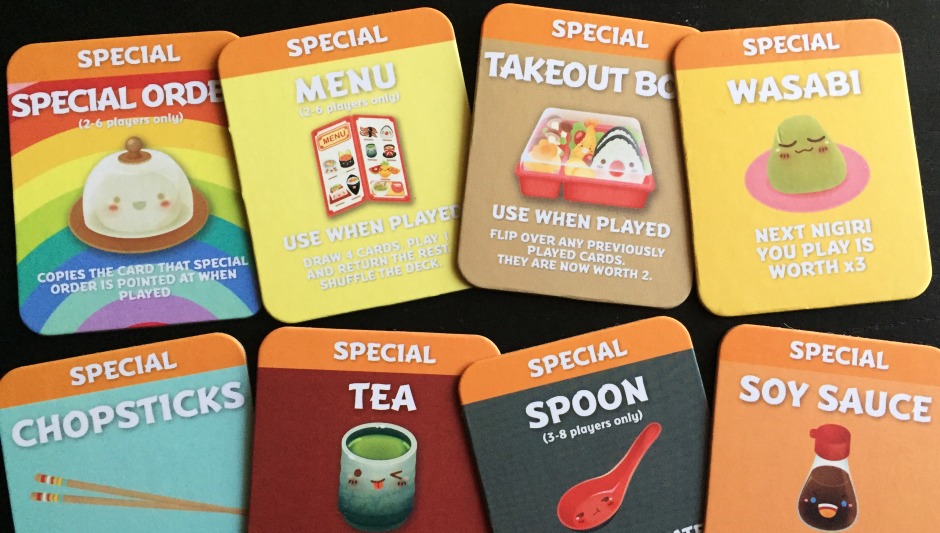 In being so simple, Sushi Go! Does a better job of letting players focus on the decisions raised by the draft format than any other game I’ve played. You’re only ever wondering where cards are, what to pass on, what’s coming to you and nothing else. It’s pure, you know?

But there’s something else. There’s a more veiled, social appeal to drafting that I’ve loved ever since I first tried it. I’m talking about the act of giving and receiving cards to and from your friends. I’m talking about the sensation of first passing on hands of cards like precious secrets, then reaching the later stages of a round where you all start moaning in unison as you hand around the slim pickings that are left, and then that beautiful, beautiful moment where you get to give the player next to you the final card like a laughably shit gift. 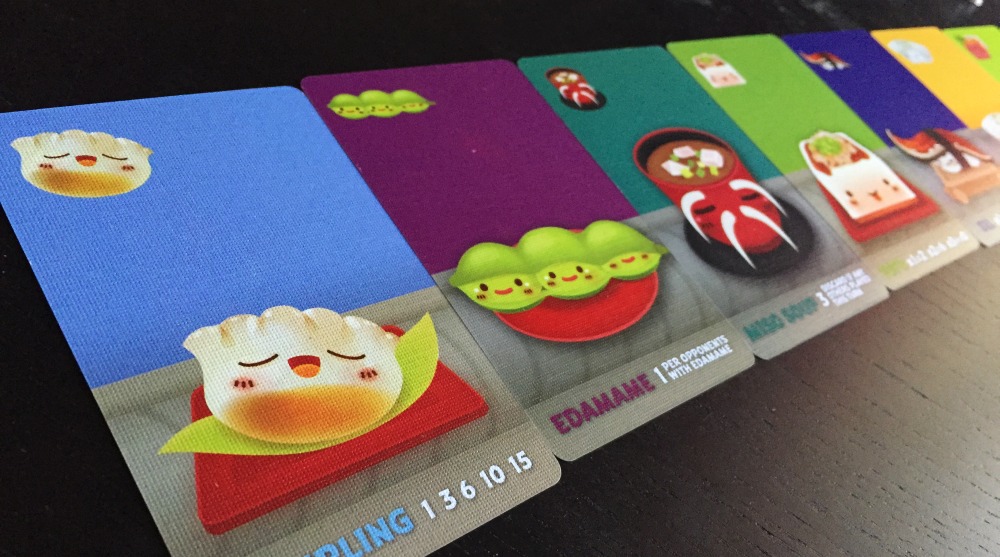 But for this shared, weird act of giving to be evocative, players need to instantaneously know a good hand from a bad hand. I love the draft in Inis, but being giving that final card by someone is going to make me reflect on what it means for my strategy, not make me laugh or make me feel anything for my friend. But in Sushi Go! even new players can get frustrated when all the cards they want show up at once, or giggle as they give someone a useless squirt of wasabi in the closing seconds of the round.

Finally, the art on these cards just make them wonderful things to hold, look at, claim and pass on. Not all card games value card art equally. In bluffing games I’m looking at people. In Sushi Go! I’m looking at the cards, constantly, over and over again, and it’s as if the designers knew that. I could spend all day looking at the smug eel sushi with his fabulous haircut.

So am I saying Sushi Go! is the best drafting game ever made? Er, I don’t feel comfortable with that, but it looks like that’s what I’m saying, which is a bit worrying.

Hmm. Best finish the review before I begin backpedalling.

Buy Sushi Go!, everybody! If you want to, anyway. I think it’s really pretty good.