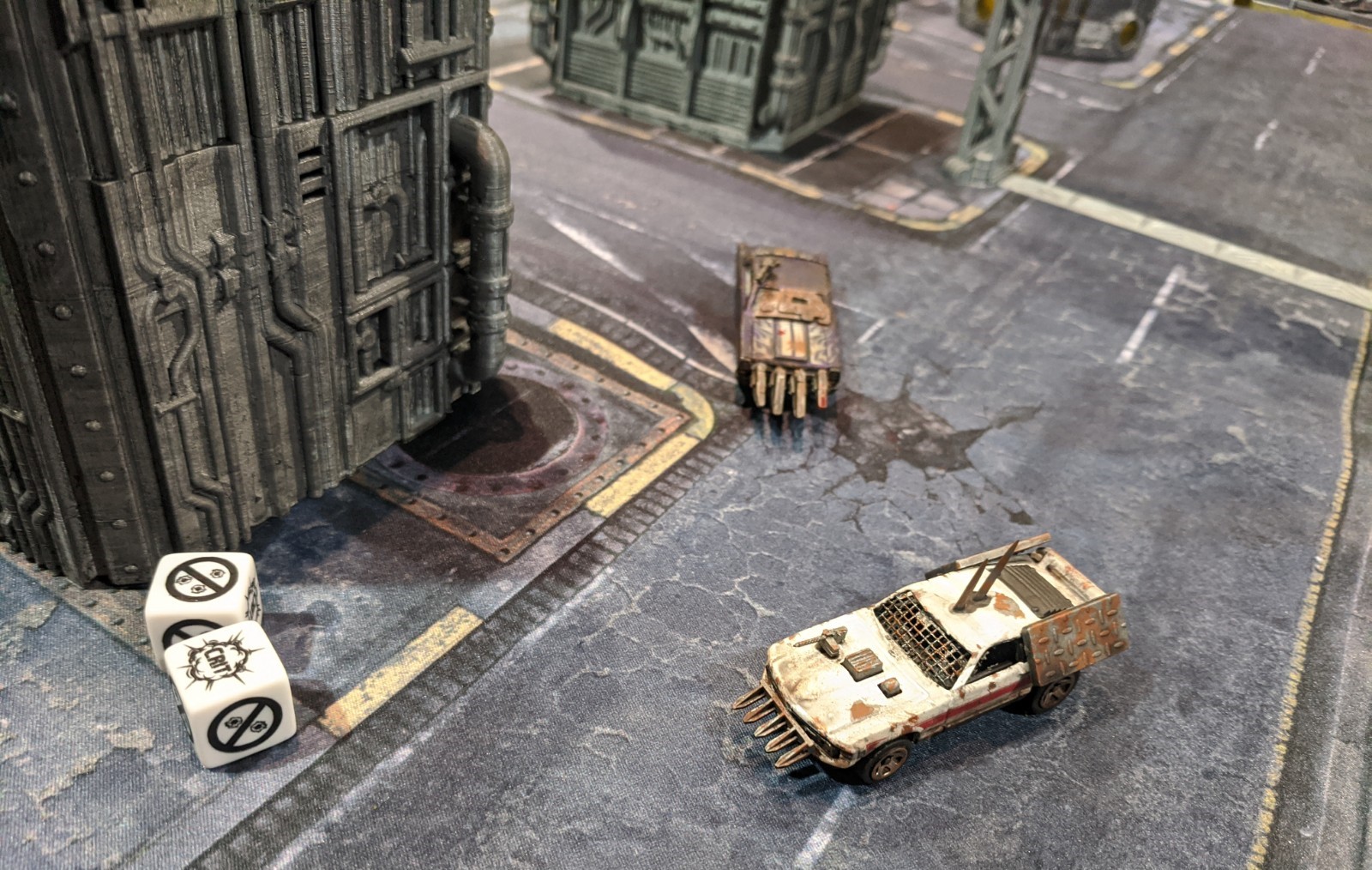 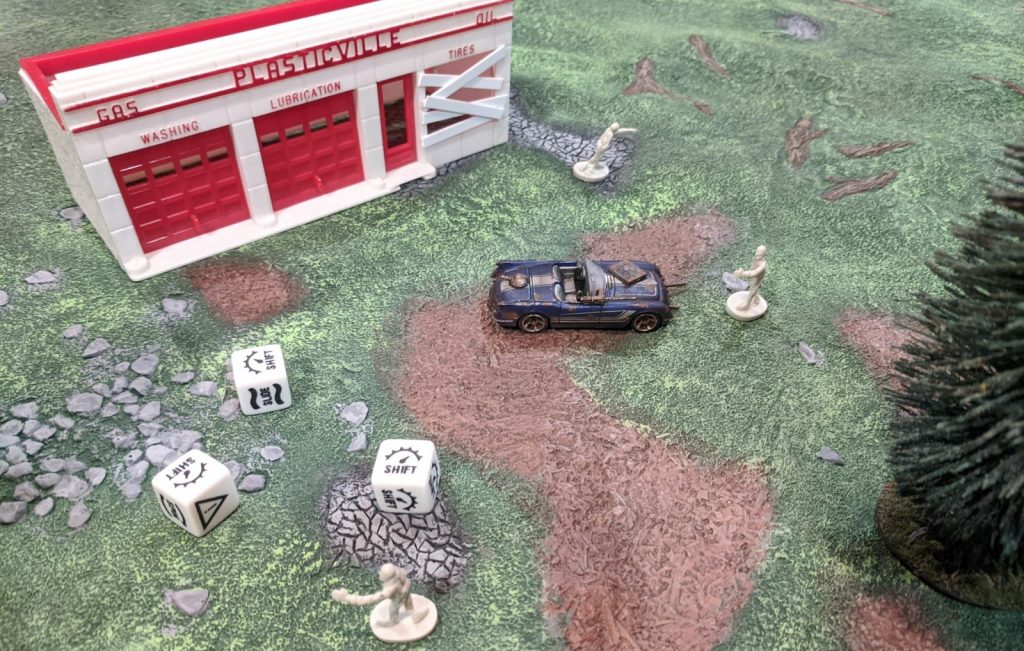 Before we talk about the game itself, we need to discuss what makes Gaslands such an exciting proposition: the miniatures. Or, rather, the lack of official miniatures. Originally published as part of Osprey Publishing’s “perfectbound rulebooks with minimal support” Wargames series, it eschews the normal approach of building a business on the back of massive pewter-and-plastic product lines. Instead, it is designed to be played with the Hot Wheels and Matchbox cars sitting in a box in your basement, ideally with a few modifications.

This minimal support does provide one of the game’s downsides. While it requires custom dice and movement templates, the assumption is that you’ll either papercraft them yourself or hunt them down from third-party sellers on Etsy (or use normal dice and consult charts, if you’re a total Philistine). For the consumer used to ready-to-play boardgames or even the tabletop wargamer used to shelling out a few hundred bucks for custom cards and pieces of plastic, this might seem off-putting. 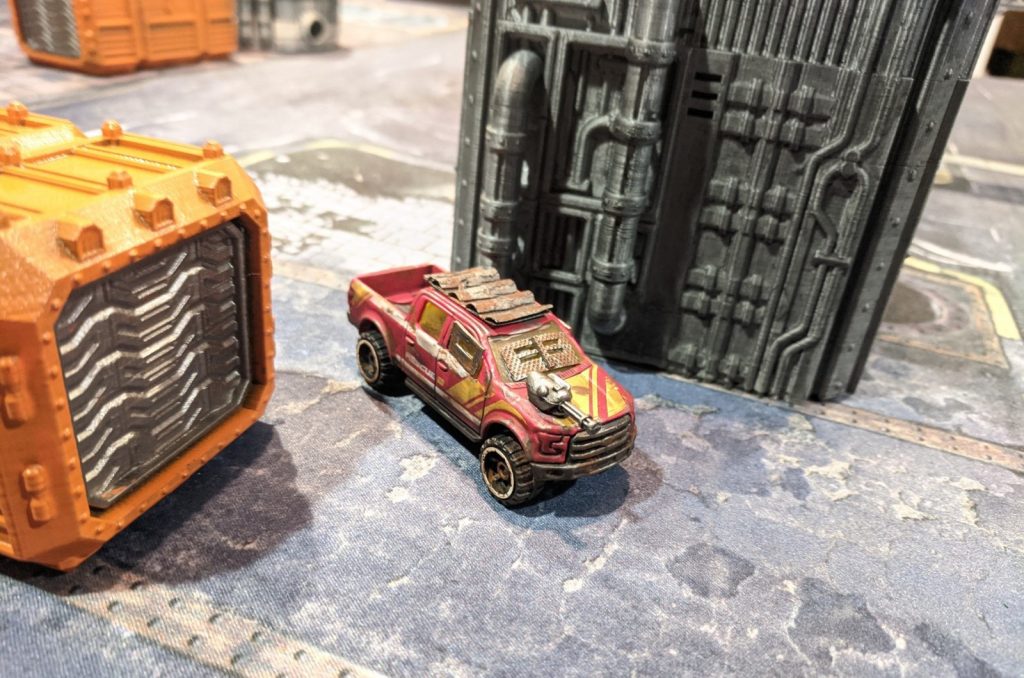 However, if you’re not turned off by a bit of crafting or online cobbling, what Gaslands provides is a wargame at a remarkably accessible price point. You really can just play it with pieces of paper and a few toy cars. If you want to take it up a notch, a pot of brown paint mixed with water and some toothpicks and doodads from around the house will have you fielding a fleet of custom-built rust-buckets in no time. A bit of time on YouTube will turn up dozens of tutorials providing guidance on such custom creations, and with an investment lower than a single box of Games Workshop Space Marines you’ll be good to go. If you want to dig even deeper, there are companies that sell custom bits to make your vehicles even more sexily post-apocalyptic.

Personally, this was one of the elements of Gaslands that excited me. When I started playing miniatures games two decades ago, the do-it-yourself ethos was everywhere. Terrain made from deodorant caps and toilet paper rolls were the norm. It was common for even the biggest game companies to release rules without models to reflect them, expecting the players to indulge in some scratch-building. As the cogs of capitalism have ground onward, more and more of the hobby space was commodified and less and less was expected to be handmade.

This was good sense for those too busy or particular to enjoy scratch-building, but it was also a loss. I didn’t realize how much I missed it until I sat down with a box of my kids’ toy cars and started digging for potential gold. 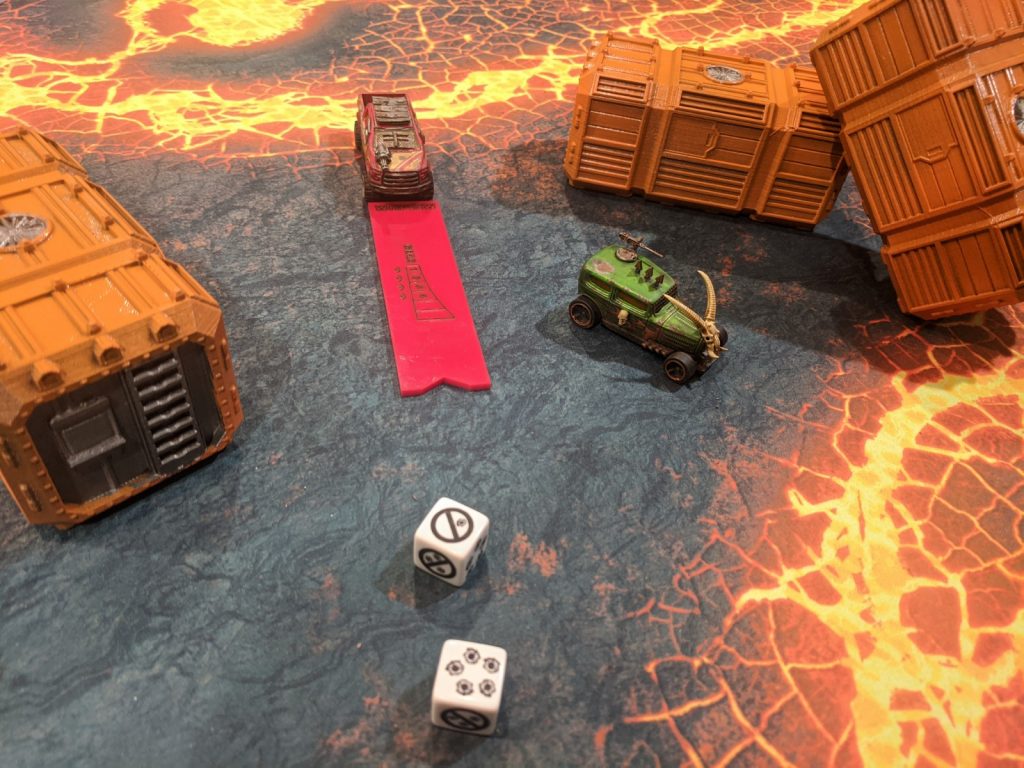 When it comes to the rules, the core of Gaslands is built on the movement template model familiar to anyone who has played the X-Wing miniatures game. Each turn is divided into “gears,” sub-turns in which cars can move if they are that gear or higher (meaning faster cars get to move more often). To make a move, the player places one of several straight or curved templates in front of their vehicle and then slides it to the far end. Gaslands lacks the simultaneous movement of X-Wing but mimics some of its uncertainty with the less elegant but perfectly workable rule that, if you pick up a template, you must use it. This prevents pre-measuring and results in players squinting and muttering, unsure if they will be able to slide into a narrow gap or crumple against an obstacle.

This template mechanic is modified by “skid dice,” which when rolled either help a player go up a gear or introduce some negative consequence like a hazard, slide or spin. Hazards are always bad, while the other results modify how the template is used – a car might slide out to the side of the template rather than arriving at its end, for example, introducing more dynamism. This is also generally negative, but on more than one occasion I have found a lucky slide putting me right where I needed to be. Within the context of the game, pressing your luck with skid dice and managing hazards adds a layer of strategy to the already-tactical movement.

Of course, this wouldn’t be a game of vehicular combat without weapons, and Gaslands provides plenty of guns and gadgets to promote maximum carnage. Each car is a unique creation: you use points (*ahem* “cans”) to purchase vehicles and upgrades. The list of options is quite long, including a number of “fun” options like the Ice Cream Truck and War Rig that come with special rules. In addition, each player has a sponsor who gives unique abilities and promotes specialization. 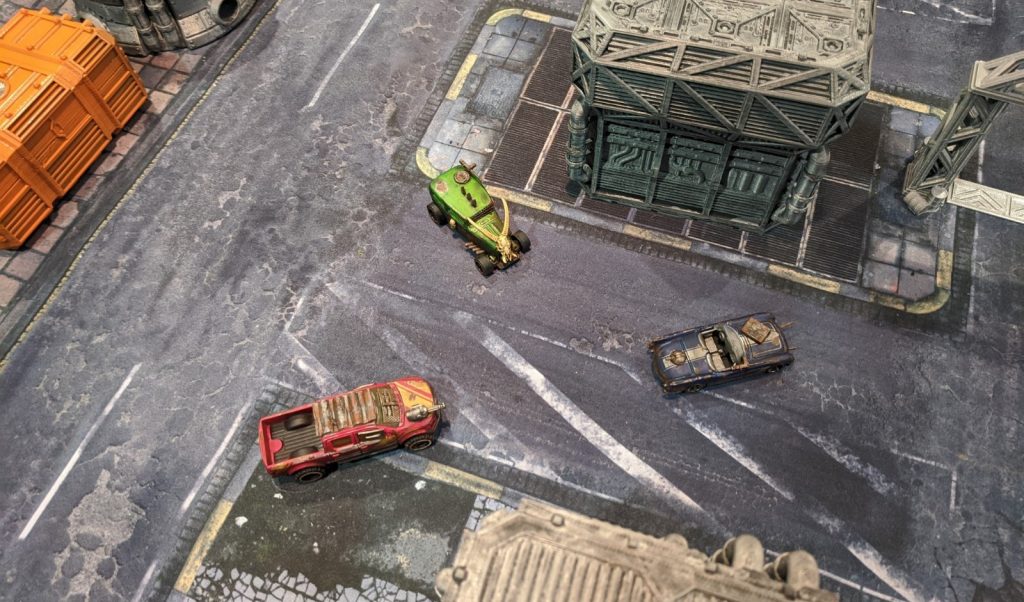 After some experimenting, I’m not sure all these weapons are balanced, tending to sort into the category of either “really cool” or “good.” Dropping an oil slick to make your opponents spin out is awesome but doesn’t really have the consistency of shooting them with a machine gun. The same is true of sponsors, some of whom provide abilities that are more generally useful while others are pretty niche. That said, there are a lot of viable options, and Gaslands is the sort of game where suboptimal choices can be easily overcome with good driving and a bit of luck.

All of this gets tied together by a series of scenarios. The standard is Death Race, which involves driving through a series of gates to be the first across the finish line. There are other modes, ranging from the straightforward “kill them all” demolition derbies to Zombie Bash, where points are scored for running over “zombies” that are definitely not innocent pedestrians.

Not all sponsors and vehicles are equally suited to every game type, which might leave certain players frustrated with a poorly-chosen fleet. However, they do a wonderful job of highlighting different ways to play and encouraging varied approaches to the game. 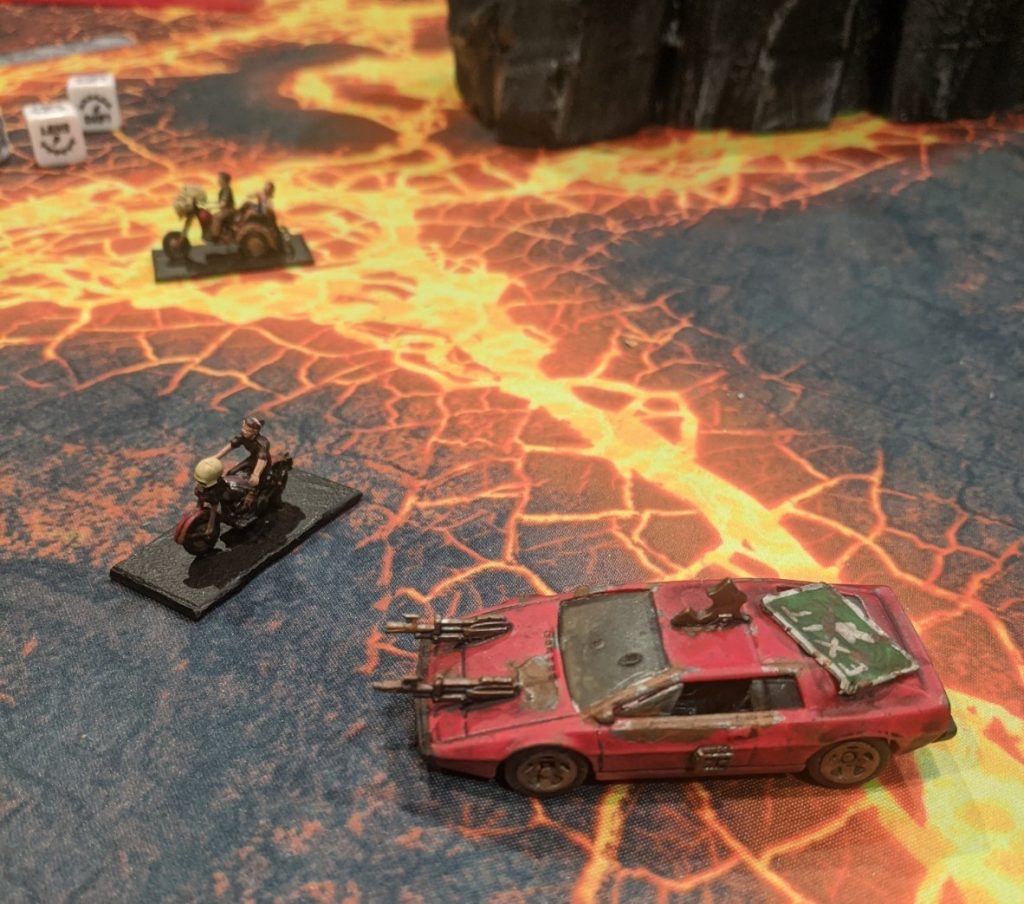 How do these elements come together?

Well, the big news first: Gaslands is ridiculously fun. It moves quickly, it is constantly engaging, and it feels full of meaningful decisions. There is enough luck to elicit groans and cheers while still being a game where skilled drivers have a big advantage. Most importantly, it has an unrivaled ability to bring out the inner child in those playing. Many of my opponents, all adults, end up making vrooming noises, squealing tire sounds and explosions as cars are reduced to fireballs. I’ve also played with my younger children, who find the spatial-prediction element a bit of a stretch but love the mayhem and custom cars.

As a miniatures game, Gaslands does lack a bit of depth. Compared to something like Infinity or Dropzone Commander it feels a bit “beer and pretzels.” That said, don’t hear that as a pejorative. Beer and pretzels are both delicious, and so is ramming your pickup truck into a minigun-equipped schoolbus. If you are seeking a “serious” wargame, Gaslands probably won’t hold your attention forever. That said, I don’t think it needs to – thanks to its price point, Gaslands can easily be the palate cleanser between Very Serious Simulated Battles. At the same time, if you’re a board gamer looking for an easy entry point to the miniatures hobby, Gaslands is about as close a thing to perfect as I can imagine. 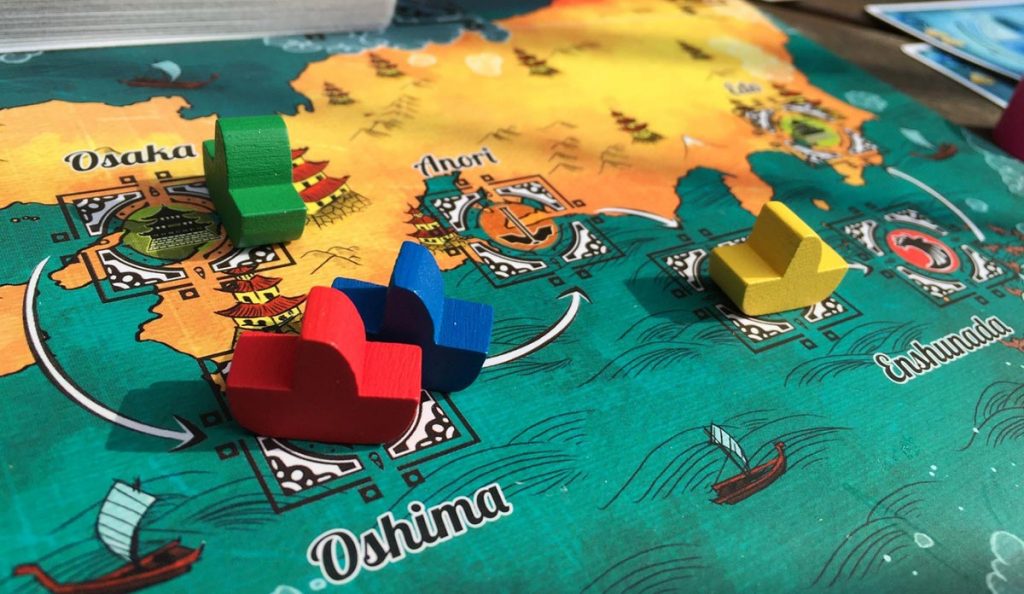