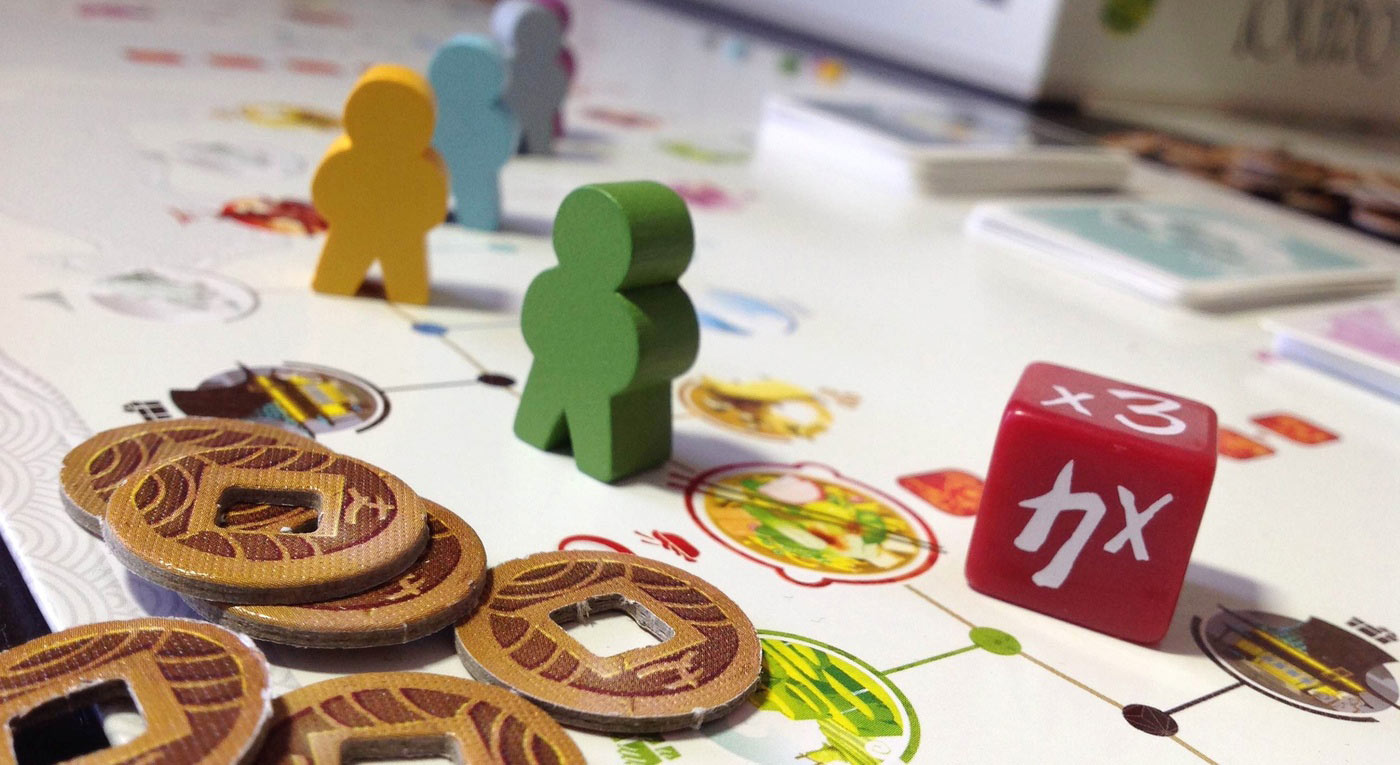 Quinns: Remember our Tokaido review? It should stick in your mind. This was a piquant Antoine Bauza game that dreamt of players hiking along Japan’s East Sea Road, from Kyoto to old Edo, simply trying to have the nicest time.

You collected local handicrafts and soaked in hot springs. You’d arrive at an inn for the night and buy soup with the last two coins in your pocket. Best of all, you could arrive at Tokyo, destitute, with nothing but a handful of cloying sweets to your name, and still end up winning because you’d earned the most wonderful memories. This was a game that lingered in your life and living room, like a scented candle.

Which brings us to Tokaido: Crossroads! An expansion for Tokaido that updates it “for the gamer”. How on earth does that work?

No, wait. I know. It’ll add the yakuza, swords, magic spells and dice-rolling. Ha! Wouldn’t that be funny! Because that’s not going to… happen…

Wait. Why is there a sword on this card. No. NO. 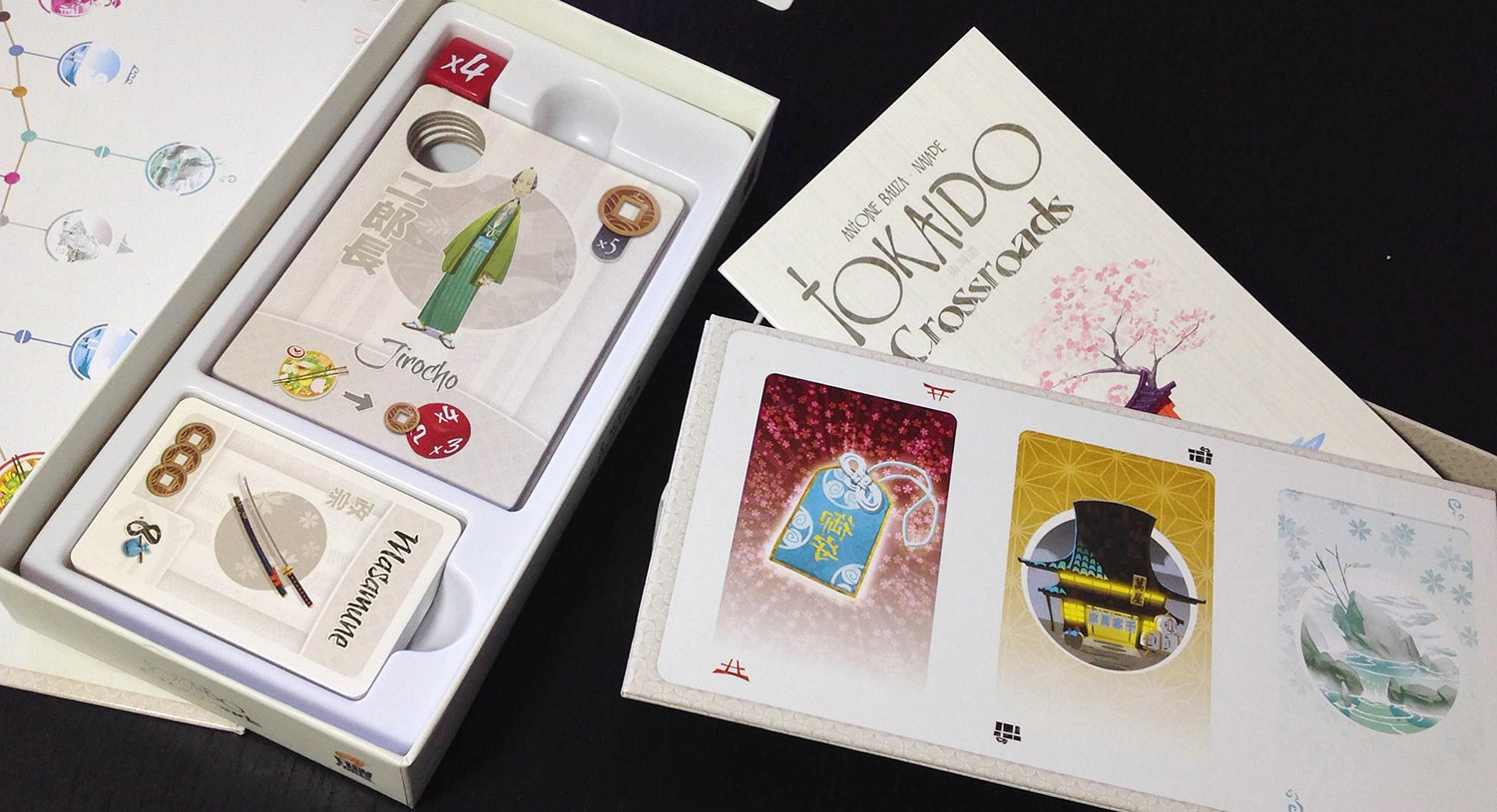 Yes, Tokaido: Crossroads really does add (among other things) swords, a playable yakuza character, magic charms and a 6-sided die to what was previously a wellspring of never-before-seen imagery in board games. A bit like “improving” a wonder of the ancient world by replacing the bottom floor with a gift shop. But while my first instinct upon opening Crossroads’ box was to upend my mug of tea into the inlay, I persevered, because I am a professional.

Crossroads adds a handful of new playable characters and people to meet on the road to Tokyo, but what you’re really paying for is more options during play (the titular “Crossroads”). What was previously a game of simply leapfrogging your fellow travellers to claim a reward further down the road (and deny them the same) now involves a second decision once you get there. 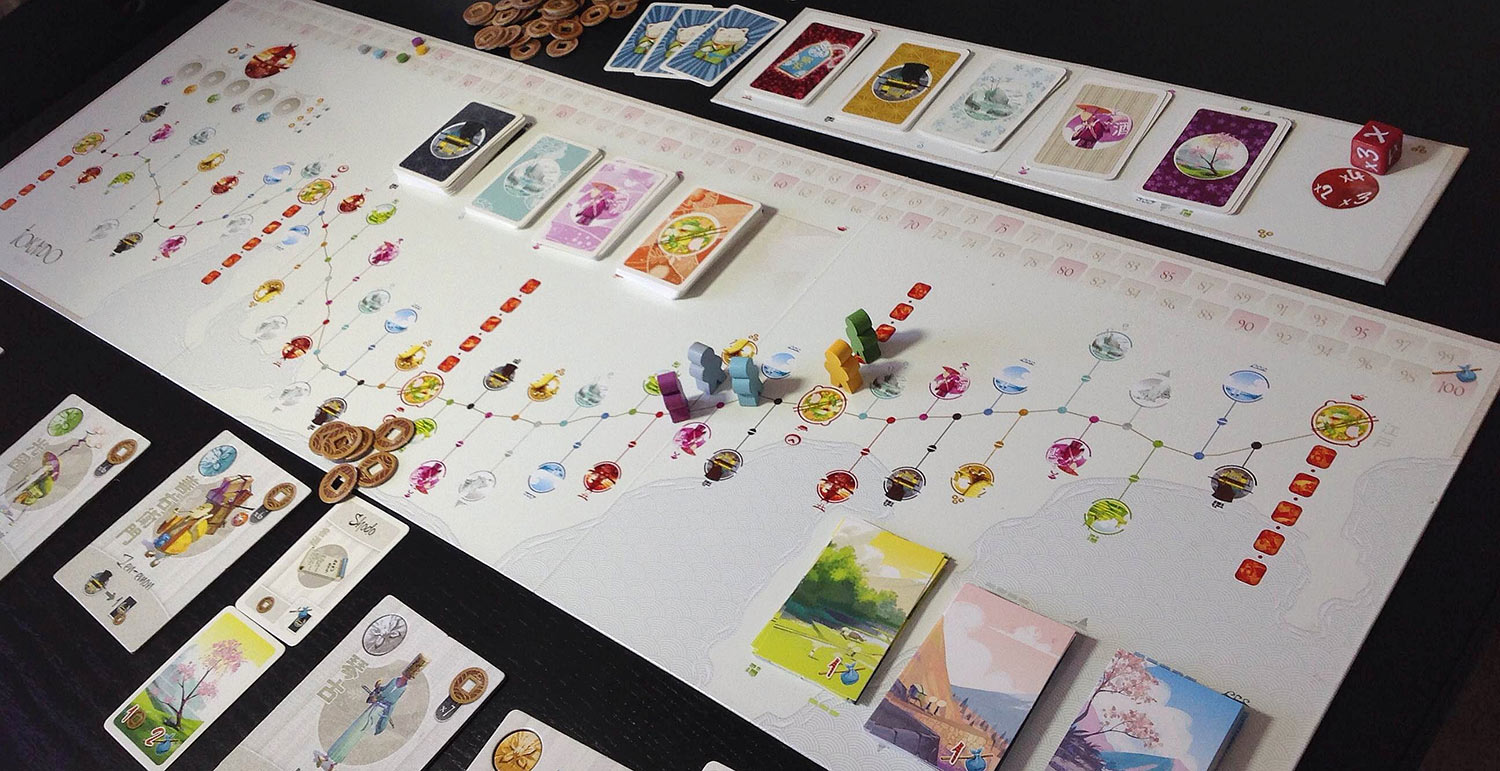 (Crossroads’ dinky extra board can be seen in the upper right.)

Let’s start with the farm spaces. In original Tokaido you can stop at the farm to do a little work, and collect 3 coins. With Crossroads you can still do that, or try your luck in “The Gaming Room!” Putting up 2 coins of your own money and rolling a new die, maybe losing everything, maybe getting nothing, maybe walking away with a staggering 8 coins while your friends scream and claw at their clothing.

Do you see how this is, on paper, more fun than Tokaido? Players can choose to push their luck! But do you also see how it’s also a shade less plausible and pastoral than the game’s original pitch?

Now, apply that same thinking to every other space on the board.

Instead of meeting a stranger on an Encounter space you can instead pay a coin to acquire a “Calligraphy” card, granting extra points at the end of the game for something you did, or didn’t, do. “Foresight” earning you points for ending the game with money, for example. Which is good, right? More tactical options!

What’s that? What does this calligraphy represent, thematically? Oh well it’s something Japan something ancient art something something shut up. 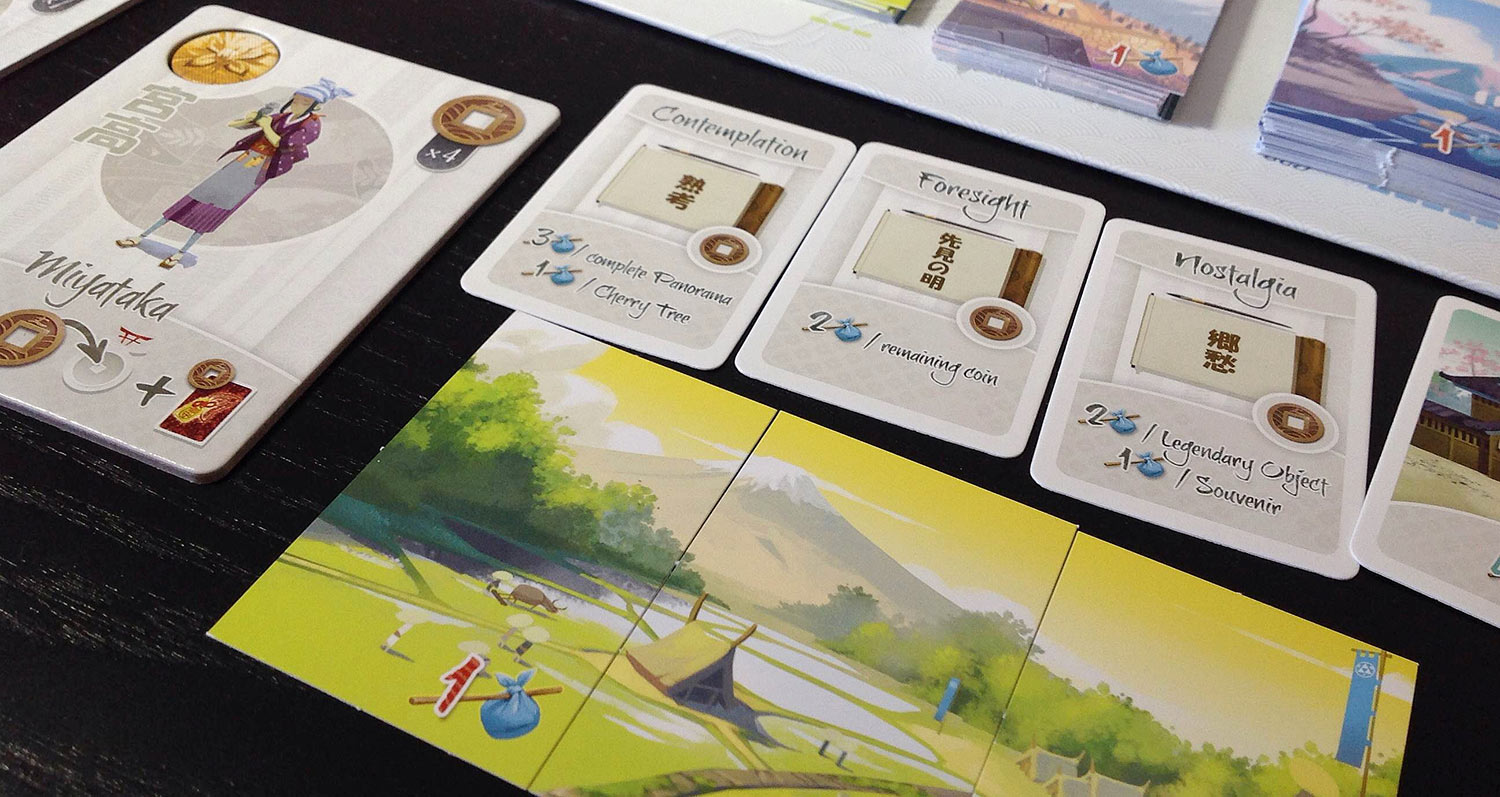 You can now pay for better baths. Instead of making donations at the temple, you can peruse protective amulets. Rather than working towards completing vistas, you can always score a quick cherry tree.

It’s the shops lining the road that have undergone the most expensive renovation, though. If you’re no longer interested in being offered a selection of colourful keepsakes, players can instead buy one of Crossroads’ LEGENDARY OBJECTS. Because gamers love legendary things(?)!

Each of these offers a multiplier on Tokaido’s traditional souvenir set-collection game, or, in the case of the swords, are simply worth a stunning 8 points by themselves. My favourite thing about these items is that they’re available from every village from Kyoto to Tokyo, which makes me think an elaborate counterfeiting business has kicked off since you last took this journey. Which is exactly the kind of cheeky detail I’d have loved to see in Crossroads, but is entirely absent.

Theoretically, then, Crossroads is poised to fix our biggest criticism of Tokaido. We signed off our old review like a couple of world-weary travellers, rubbing our feet, talking about how there wasn’t enough variety to keep us coming back. Isn’t Crossroads exactly what Tokaido needs, then? Doesn’t it make it a game you can more reliably get off your shelf? 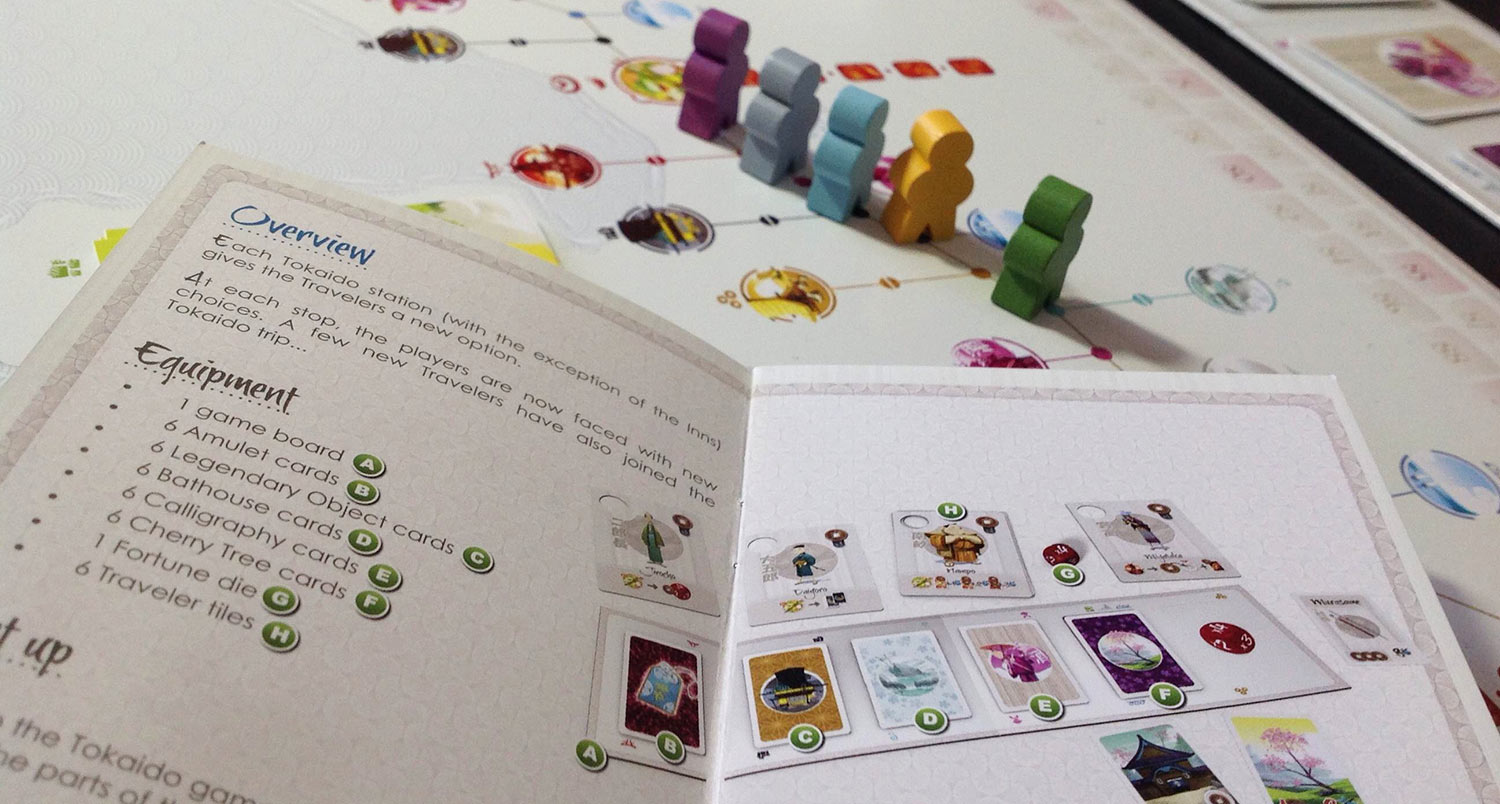 Yes, in a sense. Crossroads is a great squirt of soy sauce atop the original game’s delicate tempura dinner. You get your extra content and the game is probably improved, overall. But you also overpower so much of Tokaido’s flavour.

Theme and mechanics were in perfect harmony in the original game. A breezy, carefree journey was accompanied by a game where failure was never more than something to laugh about (your friends got to the inn first and ate all the food! ha!).

In the end, it barely mattered who won. You were all travelling on the same road. It’s as if getting to Tokyo was the real objective of the game, and you’d all make it in the end. Like how in Vlaada Chvatil’s game of Galaxy Trucker the manual explicitly states that so long as a player makes at least one dollar of profit, they can consider themselves a winner on this crazy road trip.

Crossroads’ deluge of decisions take a game that was quick, and slow it down. They take a game that was heartwarming, and set you all against one another. Because when you’re spending more time plotting and doing maths in your head than you are laughing and imagining, winning starts to matter. 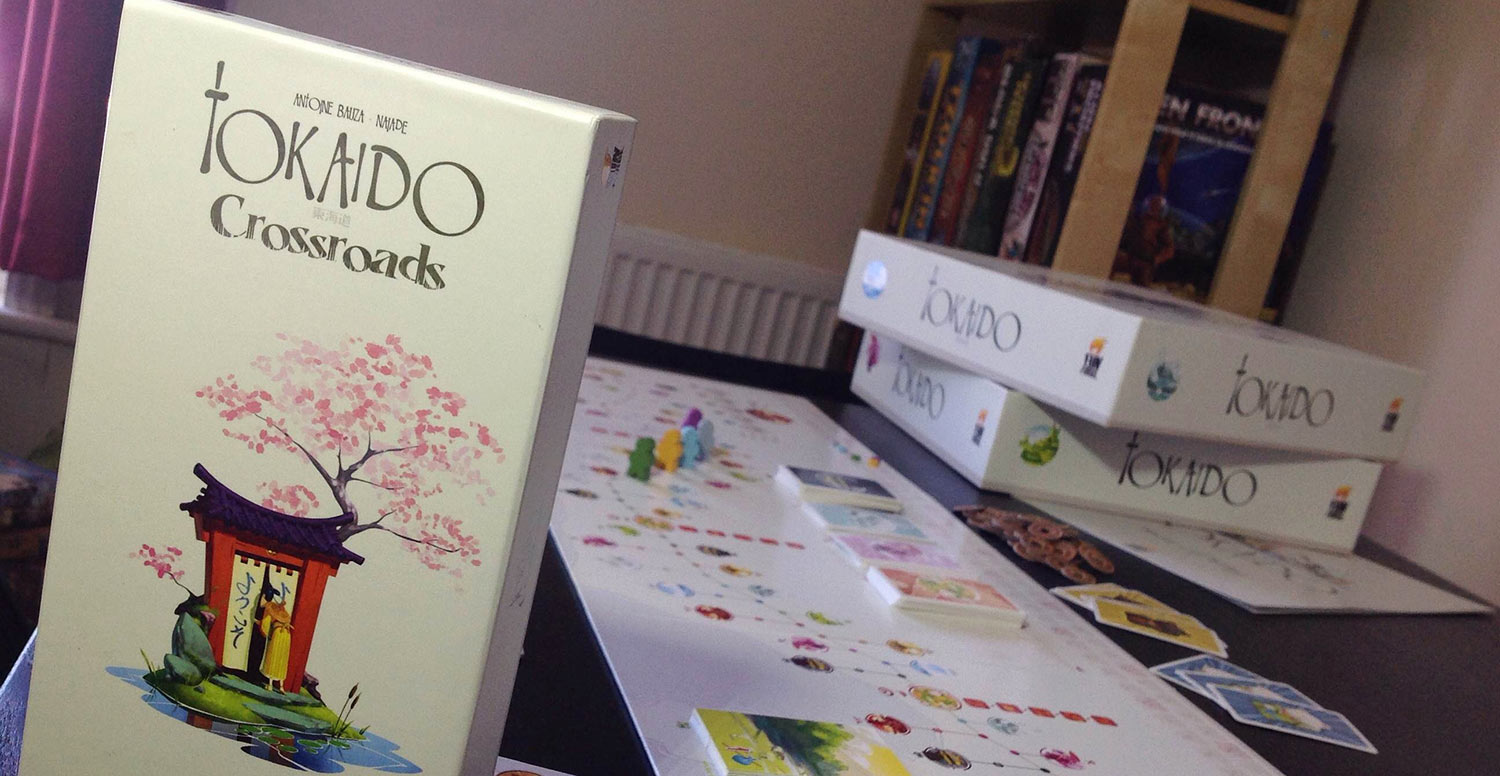 The final verdict, then. Man, it’s easy to review expansions! I just need to tell you whether I’ll be playing with this box in the future, and the answer here is a hugely damning “Probably not”.

If I get Tokaido off my shelf, it’s for people to marvel at it. That art, that theme, the journey we all share together. What I would have wanted to see from an expansion is more happy memories, moments of surprise, or – if they were really set on additional mechanics – the chance to share experiences with friends on the road with me. This was never about math, about winning, and it definitely wasn’t about swords.

Crossroads? You look lost. Are you sure you didn’t take a wrong turn somewhere? 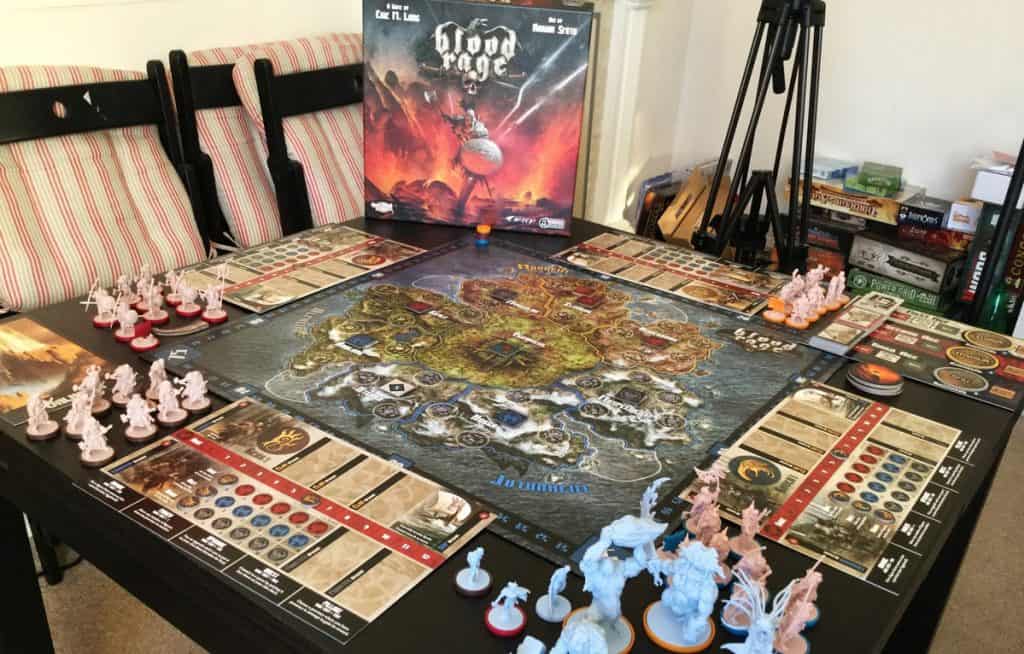 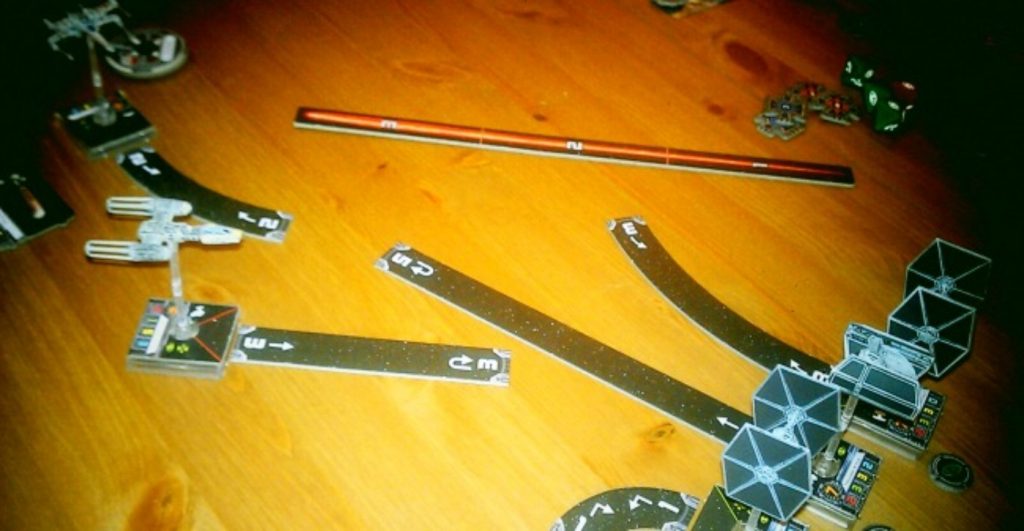