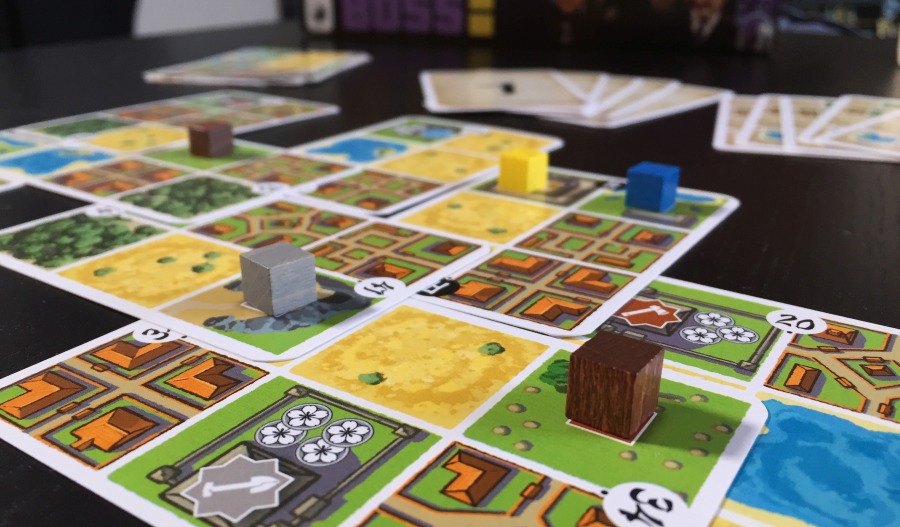 A small caveat before we proceed: Lots of people adore games that let them assemble a map on the table in front of them, games like Carcassonne and Isle of Skye, but also Caverna and Quadropolis.

Paul is one of those people, and more power to him! But I’m not. So as we take our first steps around the troublingly right-angled fields of Honshu, know that unlike a lot of people – and perhaps you, the person reading this – I wasn’t instantly sold by this game’s premise. So while I’ll be your professional guide to this quaint township, picture me as a grumpy one who smells of cigarettes.

SO! Honshu. Here’s how you play. For a game with so much lively appeal, it’s dead simple.

2 to 5 players each get dealt a hand of six cards. Each turn, all of you offer one card from your hand. The little number printed on this card determines your place in the new player order.

In this new order, the players then select one of the cards offered to add to their town, so if you offered the card with the lowest number, you get the card that’s left over after everyone’s had their pick. 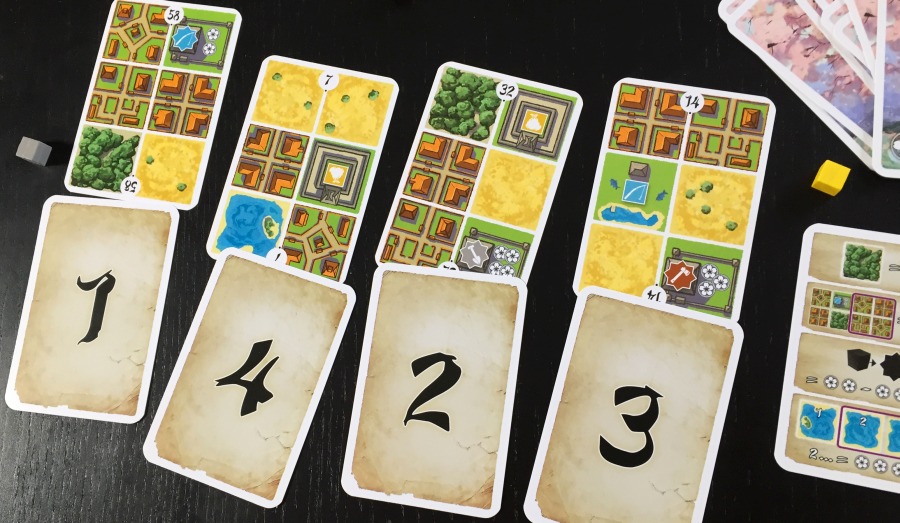 The features printed on these cards are important because they all score differently. Every forest in your town is worth 2 points. Your largest continuous stretch of town is worth 1 point for each town square. Production squares create resource cubes, and at the end of the game any factories you have will swallow same-coloured cubes and burp out points.

Adding the card you picked to your town is where Honshu gets really cool, because you can slide this new card over or under any other card in your town, so long as you don’t change the pre-existing arrangement and don’t cover any lake spaces, which makes sense, because nobody wants to build their house in a lake. Your bed would get all soggy, for one thing. Imagine that!

I’ve not played anything quite like this city building segment. Each round your entire table of players will, like clockwork (cardwork?), fall into the same calculating silence as they add up the points of rotating the card this way or that way, of going over or under, of building in this or that direction. Perhaps committing to a valuable super-lake would be best? No, you can’t use that factory yet, but maybe you could get a lumber yard later.. ? 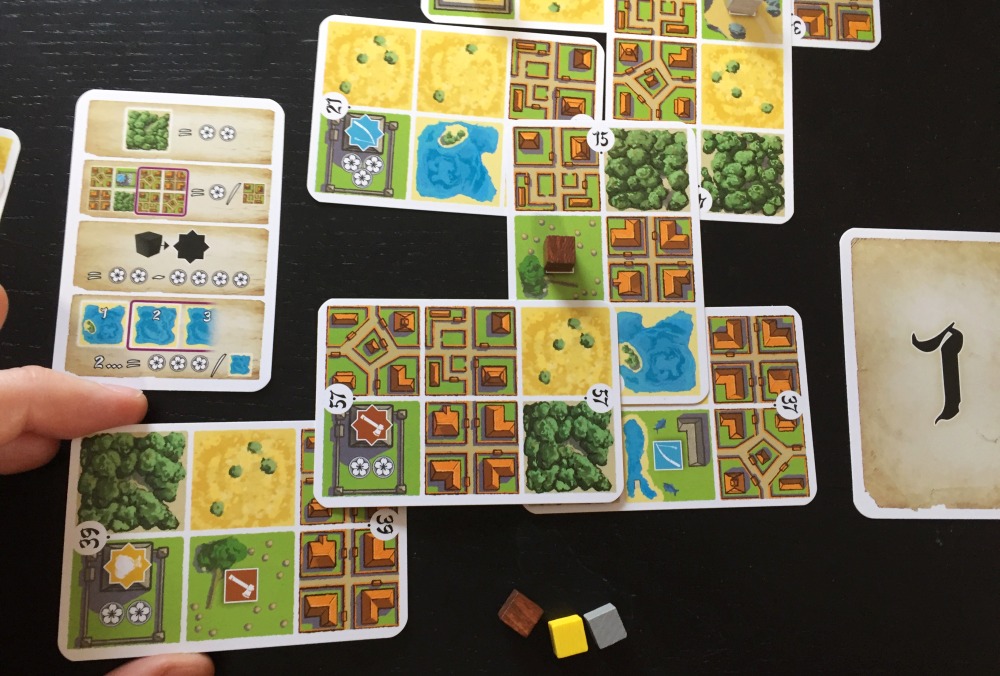 One final mechanic complicates that initial bidding phase. When you’re putting your card down you have the option of putting it down with a resource cube, which automatically gives you first pick of the cards UNLESS another player also submits their cards with a same-coloured cube taken from their own town. So while a cube might be worth points at the end of the game, you also might spend it to avoid being stuck with cards that are so bad as to feel less like landscaping and more like landmines.

The sandy “fallow” spaces are worth zero points, you see. The horror! 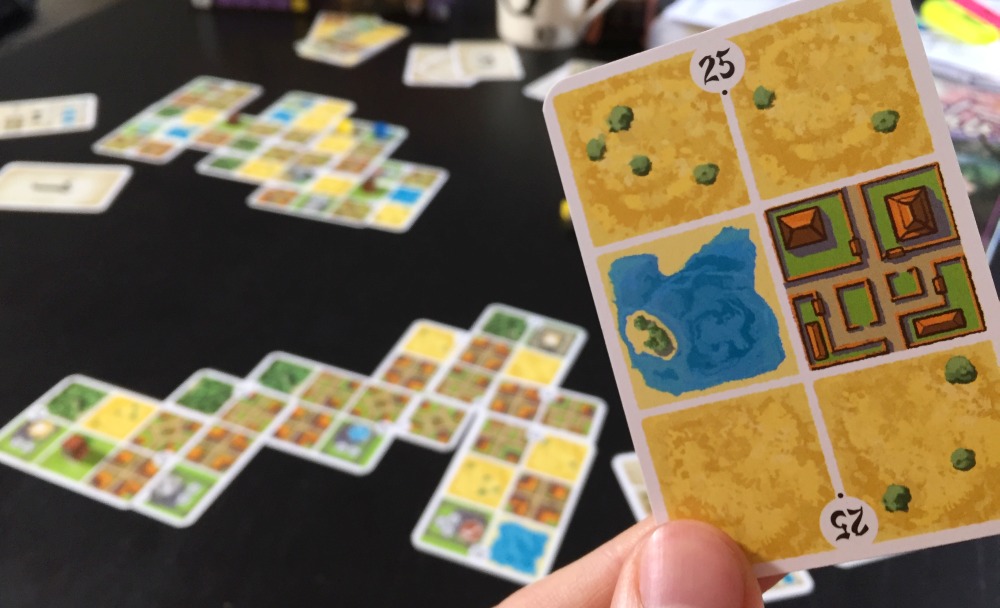 So that’s Honshu! After drafting 6 times you’ll draw another 6 cards, and after that the games finishes with a 12 card town. Though nobody’s stopping you from building even bigger towns, of course, so long as you’re all consenting adults.

All told Honshu is inventive, it’s pretty and it’s a strong little puzzle.

…But having played it a half-dozen times, I’ve developed what’s bound to be an unpopular opinion. It’s not a brilliant game.

The card games that I personally love are ones that involve players in one another’s actions. Skull, Jaipur, Arboretum, Incan Gold (now re-imagined as Diamant), Condotierre – or even the second tier card games in my collection like Welcome to the Dungeon, Archaeology, Parade, Mundus Novus and Sushi Go Party – these are names that bring to mind me laughing and hating and loving my friends for their guile, their luck or their patience.

Honshu is the other kind of card game, the role of which in human culture is no less valid. It’s a boondoggle. It’s a game for when you just want to sit with your friends rather than actively juke with them. After just a couple of plays I felt that the drafting bit of Honshu – the only part where you interact with other players – is all-too-often inconsequential.

For whatever reason the happy majority of the cards in the deck are essentially as good as one another, and the town-building is so flexible and involved that whatever score you get will be 90% town building and 10% drafting. Theoretically while choosing cards you could examine other players’ towns to deny them what they want, assuming they clearly need a particular feature and it’s in the shop (if, if, if) but just figuring out what card is best for your town is something of an inscrutable decision, so peering over at your friends’ competing villages has very little appeal indeed. 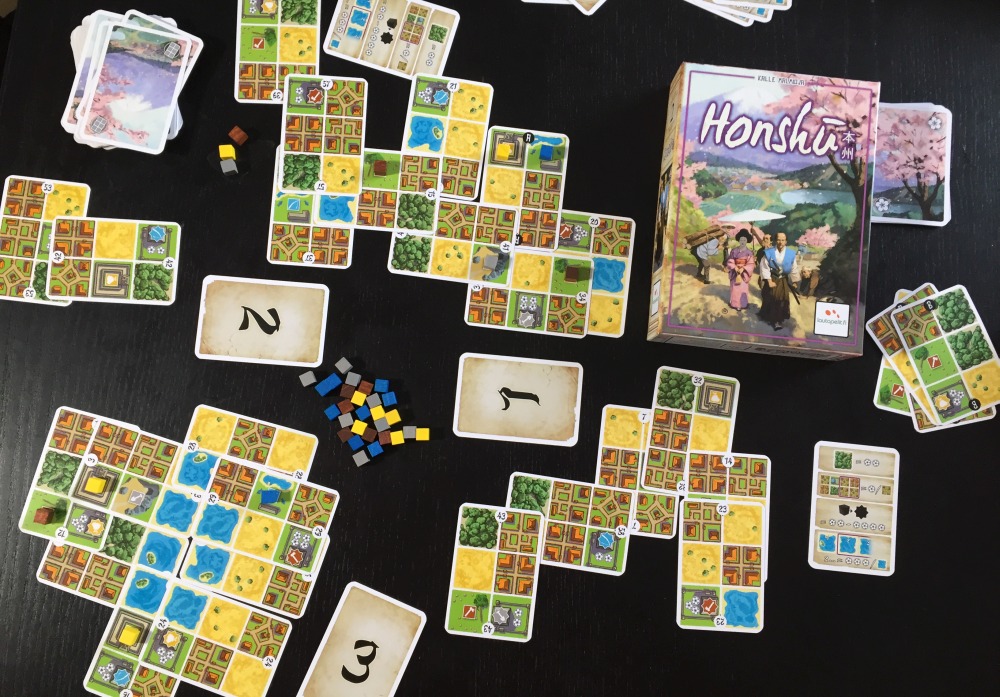 Instead you’re left Lego-ing together your own little town in an onanistic fashion. And while you’d have to get up pretty early in the morning to find a bigger fan of onanism than Quintin Smith, if I’m inviting my friends over and we’re playing a game where we’re not interacting much, I at least want it to be such an interesting experience that we can gush about it afterwards. I want magic. I don’t want to stare vertically downwards and have a functionally identical experience if I play with 2 players or 5.

So no, Honshu didn’t feel magical. It felt… good! It felt fine. I’ve played this game with eight different people now and at the end of every single game we’ve all nodded our heads and agreed that this was good and it was fine, and we’ve packed it away chatting about what a good, fine game it is. But within the Aladdin’s Cave of games that is my house, nobody has ever once suggested we play it a second time.

But here’s what I’m hoping.

I’m hoping that lots of you don’t care. I know you’re out there! Did you get really excited just seeing pictures of Honshu, at the very idea of a game that turns something as simple as a deck of cards into a gorgeous map-building game? Are you imagining putting it in front of friends who don’t play many games and showing them just how clever and colourful this hobby can be? If that’s you, you shouldn’t think twice about getting Honshu. For a card game, it’s marvellously inventive. As a parlor piece, it’s a delight.

I guess it comes down to what we play games for. Some people play them for the stories, and for some – like Honshu fans – it’s about the satisfaction of a well-crafted puzzle, well-solved. But I’m increasingly aware that I play them for the other people, the emotions and the interactions.

But I don’t want to be the only one who’s over-shared. What do you play board games for, do you think? 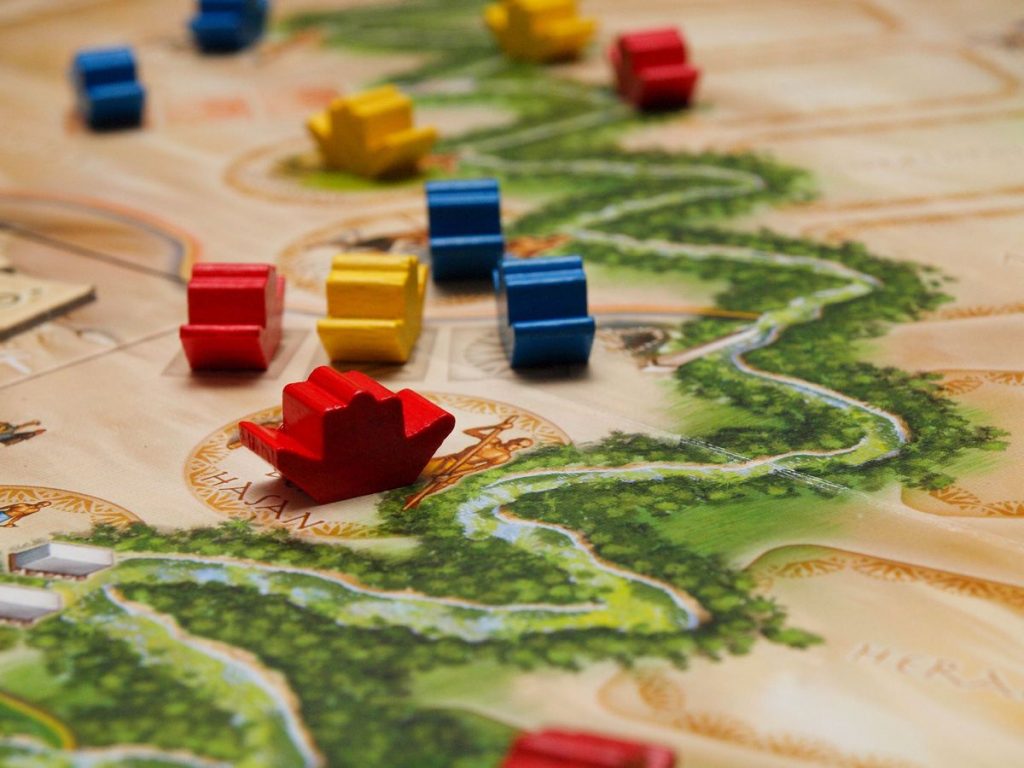