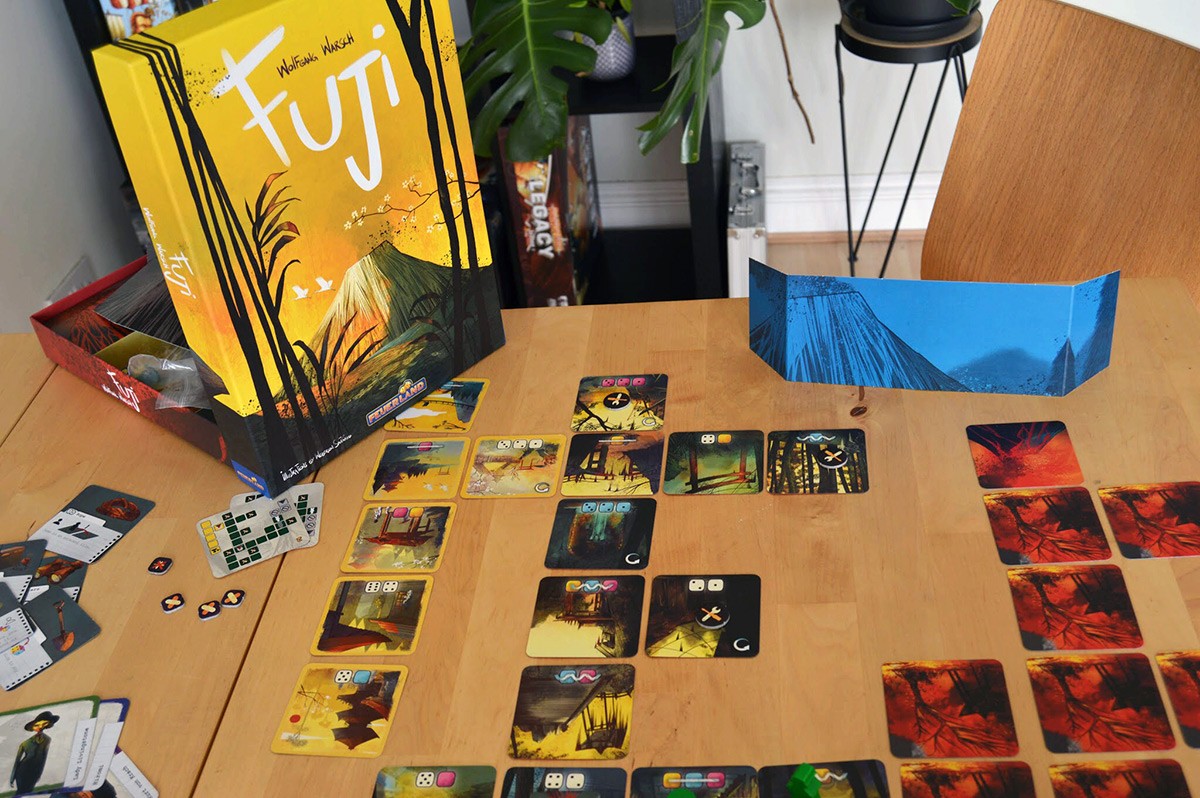 Kylie: Wolfgang Warsch’ gorgeous new game, Fuji, pits players as mismatched adventurers who find themselves on top of Japan’s most famous volcano. But it was poor planning on the part of the travel agent, because right as you reach the top, Mount Fuji begins to erupt. You and your companions will have to race against the flow of lava, back to the safety of the village.

Did I mention that this is a co-operative game? Together, players will either scramble to safety, or burn to a crisp. 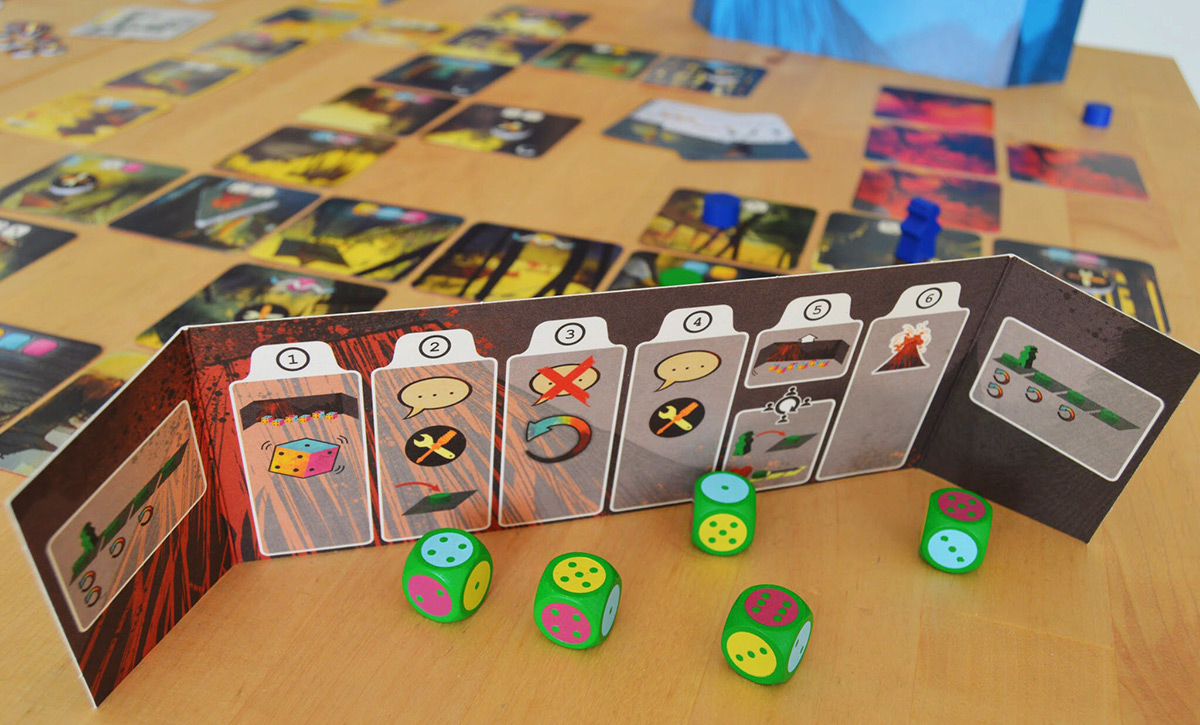 Each turn, everybody rolls their dice and compares the results to decide on the best route back to safety. Cards laid out at the start of the game map out the landscape of the volcano, but each of these cards examines your dice differently (the total of your red die faces, for example, or the total of your even numbers). To move to each space, you have to have a higher total of that than either of your neighbours.

Here’s where it starts to get a little tricky. Players roll their dice behind screens and can’t communicate exactly what they have. In a similar style to popular card game Hanabi, players have communication limitations. You can’t talk about specifics or averages in any way. In the picture above, for example, you couldn’t say “I have two fives”. You could, however, say “I have a lot of high numbers”.

This elevates Fuji from being a luck-based, dice chucking extravaganza, to a game of thoughtful gambles based on imperfect information. Because when those dice are revealed, if you can’t move to the space you chose? You don’t move at all, as the lava oozes ever closer. 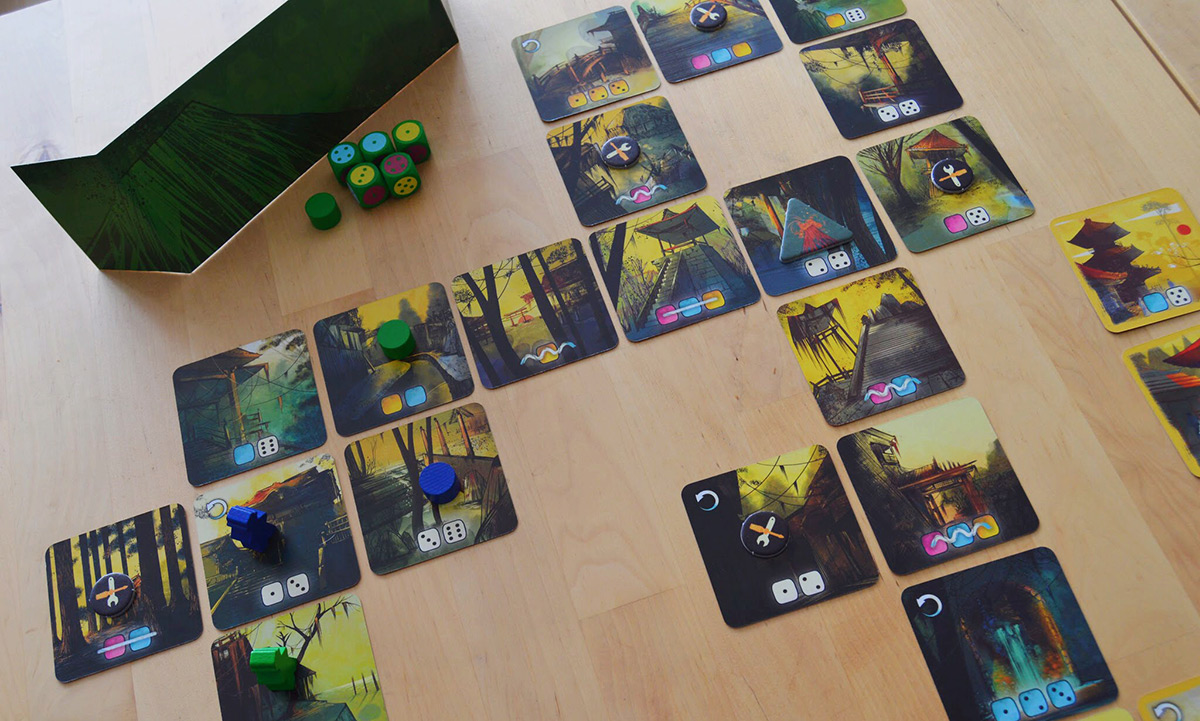 What routinely happens in the game is you roll your dice and think “Aha, I’ve got some good pink and yellow dice here. Everybody, I’ll try and move to this tile!”

*moaning from across the table*

“That’s literally the only place I can go.”

What follows is a bout of intense discussion as players try to solve the puzzle on the table, half of which is elegantly laid out in front of you, half of which is hidden. And you see, your rolls in Fuji aren’t all about you. They’re about everyone. Sometimes you have to forget about moving forward, instead nudging and re-rolling your perfect dice just to give your teammate a better chance of dashing forward. Because if any of you die? You all lose. 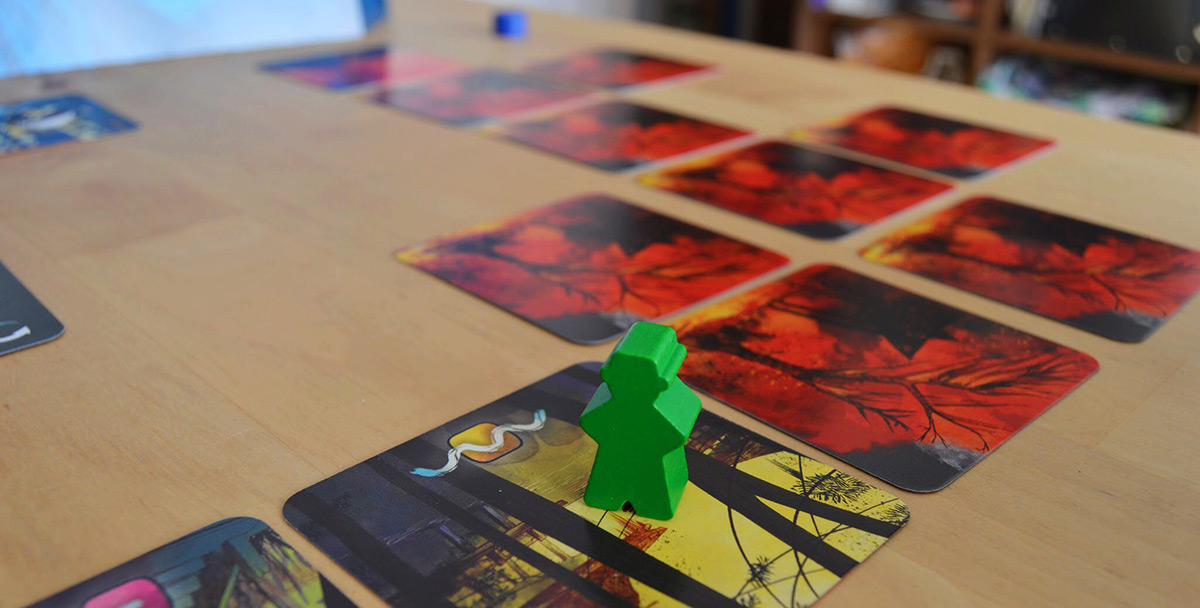 Fuji is a raw, redolent experience which traps players in a series of tiny dilemmas from start to finish. On the one hand you’re trying to roll the best dice possible to ensure that you can slip down the side of the volcano, perhaps snatching a handy item card on the way. On the other hand, high dice rolls may freeze a teammate in place, and suddenly lava is licking at their heels. You’re constantly weighing up difficult decisions, and having to make brave leaps of faith.

Players do get a slight reprieve with equipment cards, which often allow you to strategise out of a particularly dicey situation. In addition, individual character skills add an element of hope to a game full of suspense, agony and despair.

However, don’t rejoice too much, because throughout the course of the game players will also collect injuries which will prevent you from using your ability, equipment cards, and – in the case of a leg injury – which permanently removes one of your dice. This can be exactly as debilitating as it sounds, and you’ll end up leaning on your teammates more heavily. 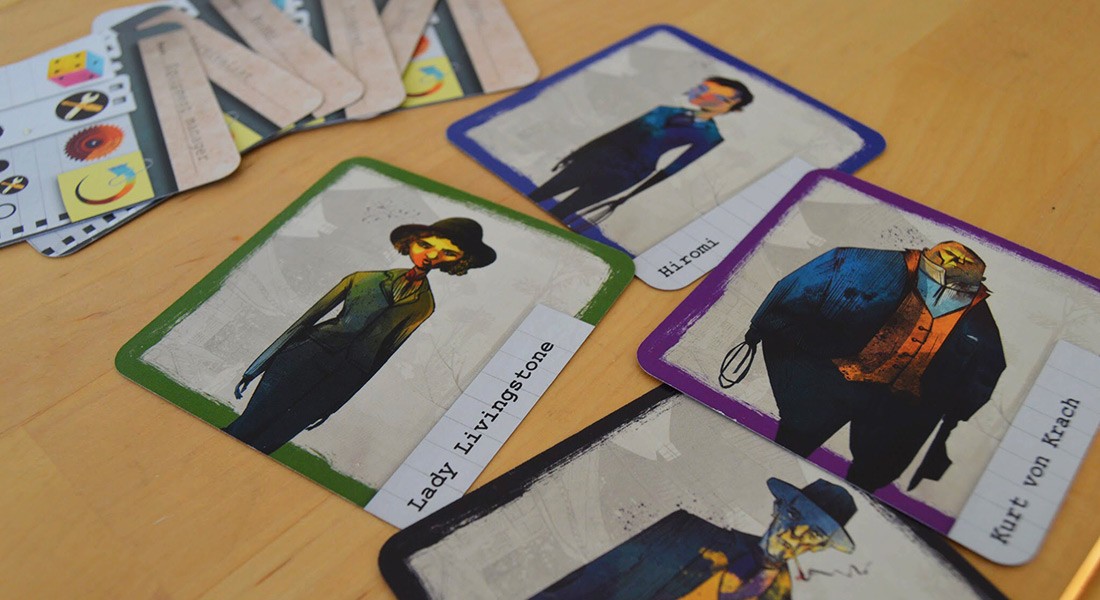 Scalewise, Fuji is primarily geared towards 3-4 players. At 2, the game uses a couple of dummy variants. Whilst I’m often hesitant about these, this one was actually very enjoyable, and has you supporting a next-to-useless 3rd character down the mountain. It reminded me of Everest disaster stories, where you hear of wealthy but unskilled individuals caught on the mountain during a disaster, and being guided down by heroic Sherpas.

There’s a fair bit to explore in this small-ish box. The game comes with several layouts for the volcano tiles and a few different character skills and equipment cards which adds a small degree of contrast to each play. There are also multiple difficulty levels which will ensure any group is kept on their toes, as well as numerous variants that tweak the balance of the game, whilst also providing committed groups with a plethora of increasing challenges. 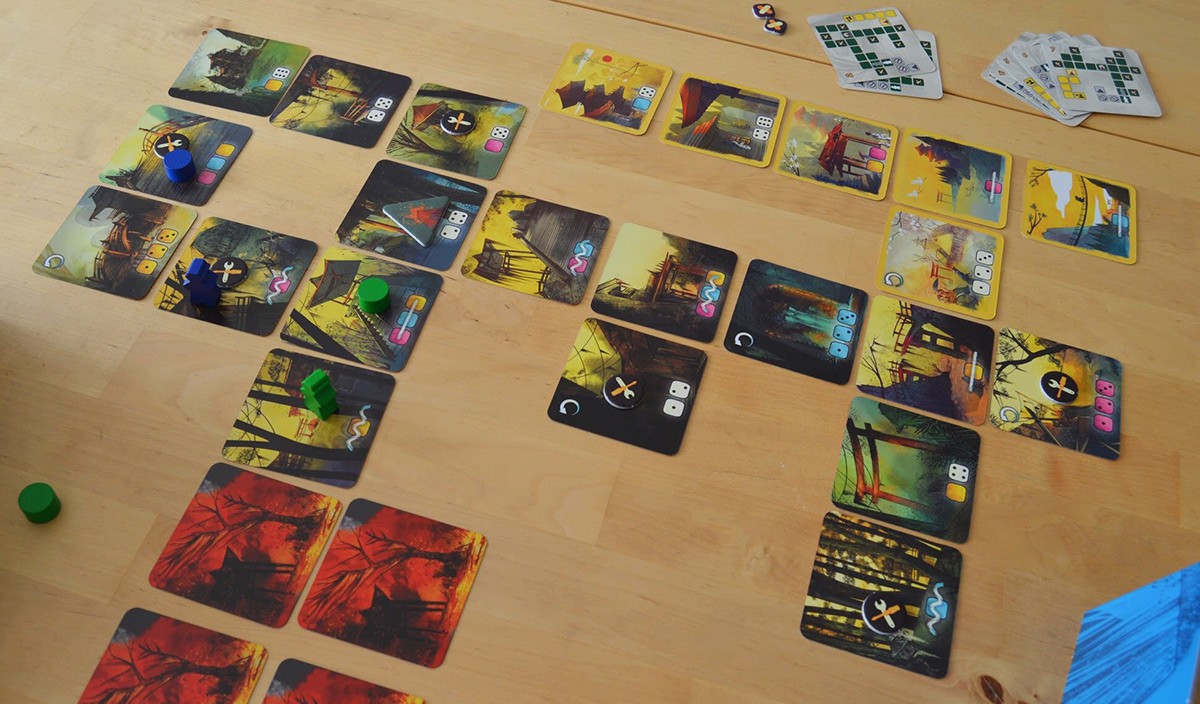 So at first glance, Fuji is a work of art, both literally and figuratively. The illustrations provided by Weberson Santiago are breathtaking. Weberson provides a refreshing style in a world that relies heavily on basic primary colours. The game itself is innovative, fresh, and an example of cooperation in its purest form. It’s a game where self-sacrifice is absolutely necessary in order to ensure team survival. It has a high level of engagement and interaction as every player is involved in every decision. You can’t coast your way to victory here by relying on more experienced players. Your dice rolls will affect both of the players next to you, so you have to learn how best to communicate with one another, and do so quickly. The volcano rapidly turns to a hellscape of molten magma as the picturesque scenery cards are flipped to their fiery counterparts, evoking a real sense of danger, urgency, and precariousness, wherever you happen to be. 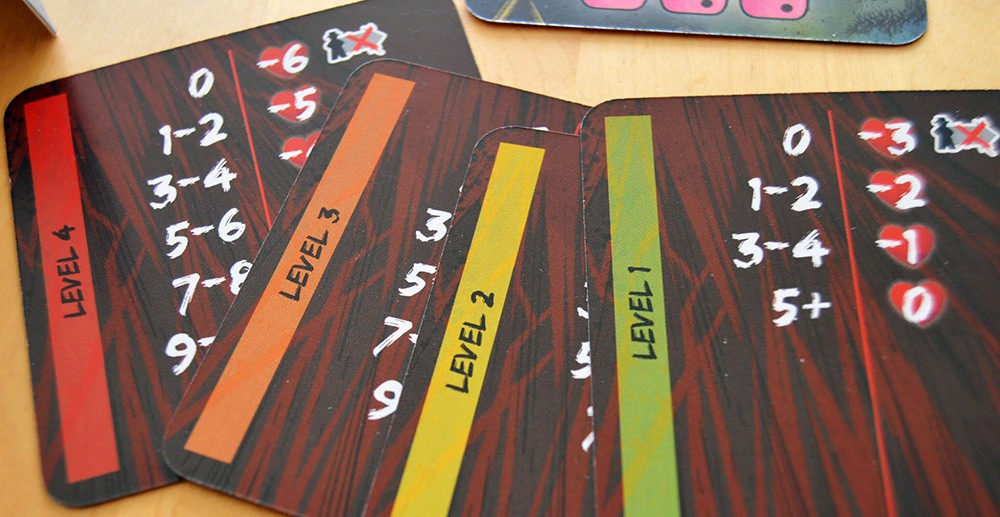 Here’s where the ‘but’ comes in. Communication is hard. It’s hard to explain to people, hard for some people to wrap their heads around and even when you understand the rules, it can be hard to get right. You can’t talk about numbers or averages in any way, remember, and you also can’t say exactly what coloured dice you have. Instead, you have to opt for vague sentences such as “I rolled poorly” or “I could be a threat for you”. It can all get a bit fiddly, and for such a big part of the game this can sometimes leave the experience falling a bit flat.

And for such a clever game, there’s also a lot of dice rolling. By its very nature this is heavily based in the realms of Lady Luck, and a couple of rounds of poor results can leave players feeling frustrated and downtrodden by the whole affair. As this is a cooperative game you can quickly end up feeling like a burden to the other players, too, as you take on more injuries whilst remaining rooted in the same spot.

The challenge is also pretty static. The overarching storyline is the same in each game that you play; you’re escaping an erupting volcano. There are no surprises thrown at you or cards that make one play stand out from the next one. In Pandemic, for example, the order of the infection and city cards can lead to some epic moments that stay with you for a long time. In Fuji, every round and every game is about the dice that have been rolled, which some may find tedious after multiple plays. 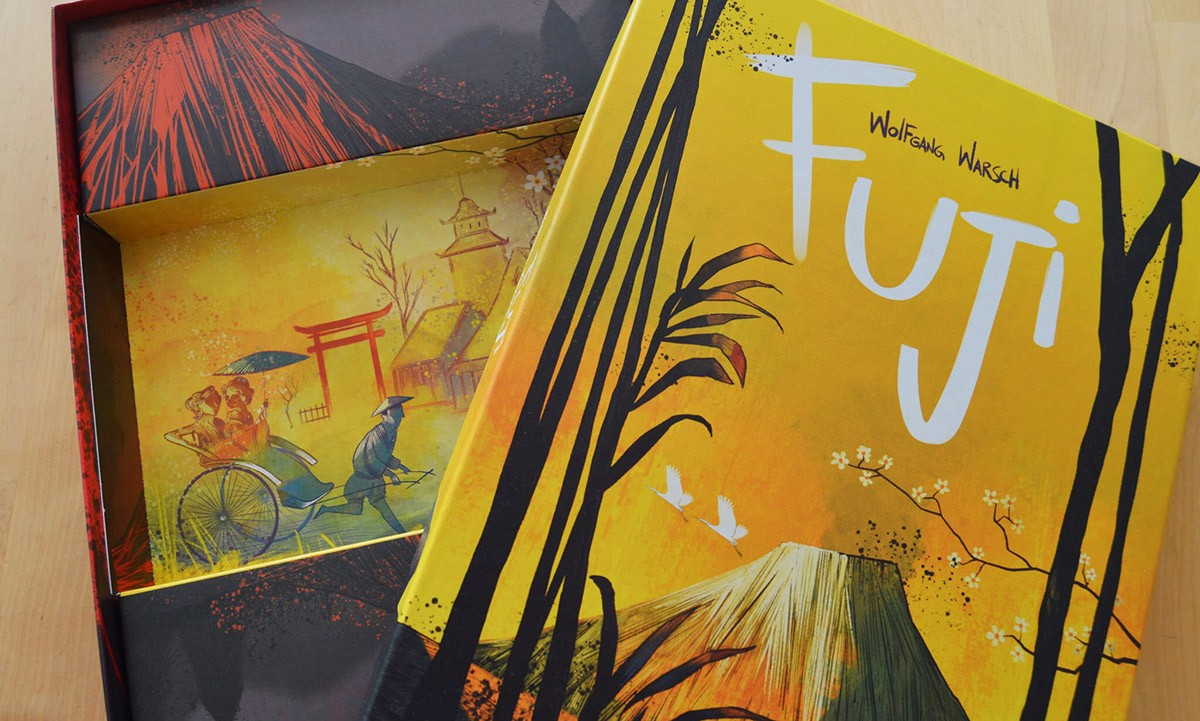 However, the sense of amelioration and betterment as your group of amateur adventurers become bolder and greater is addictive. The new challenges means there’s always a bigger and better Fuji to tackle. And a slightly rudimentary, yet fun scoring system at the end of the game gives a finality to your story, from surviving the volcano but spending months in hospital,to capturing the eye of Hollywood directors who want to make a movie about your heroic endeavours.

Whilst there’s no denying there’s a very obvious learning curve to the communication methods, once you’ve jumped over the hurdle there’s a real elegance to the experience. It’s frustrating, primitive and agonising, but it’s all wrapped up in a rewarding, unique and edifying puzzle, that offers an abundance of satisfaction when you finally crack the code.

It won’t set the table alight for everyone, but if cooperative games are your jam, this one is worth powering through for. 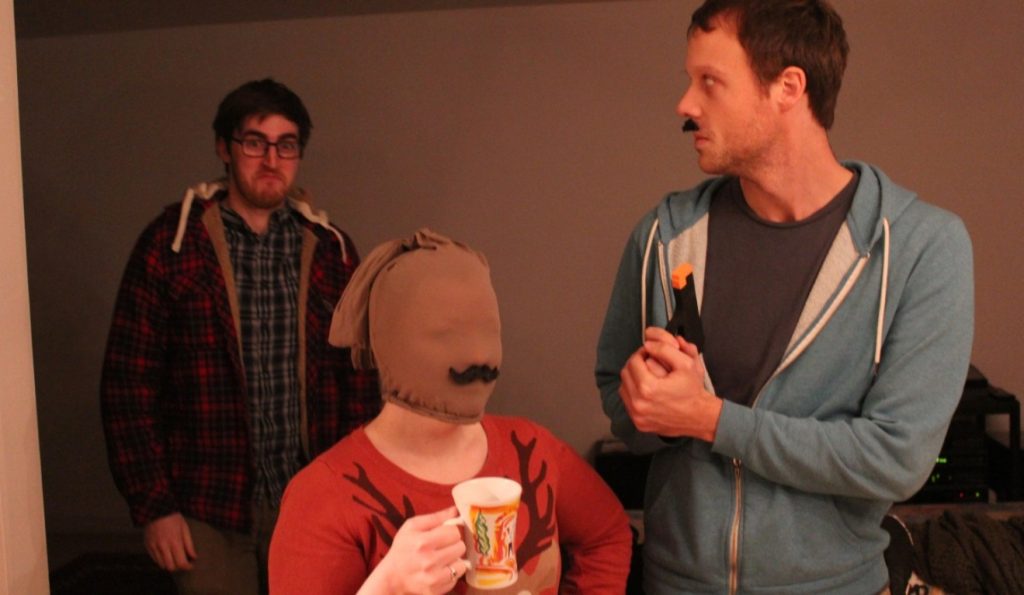 Review: Out of Dodge 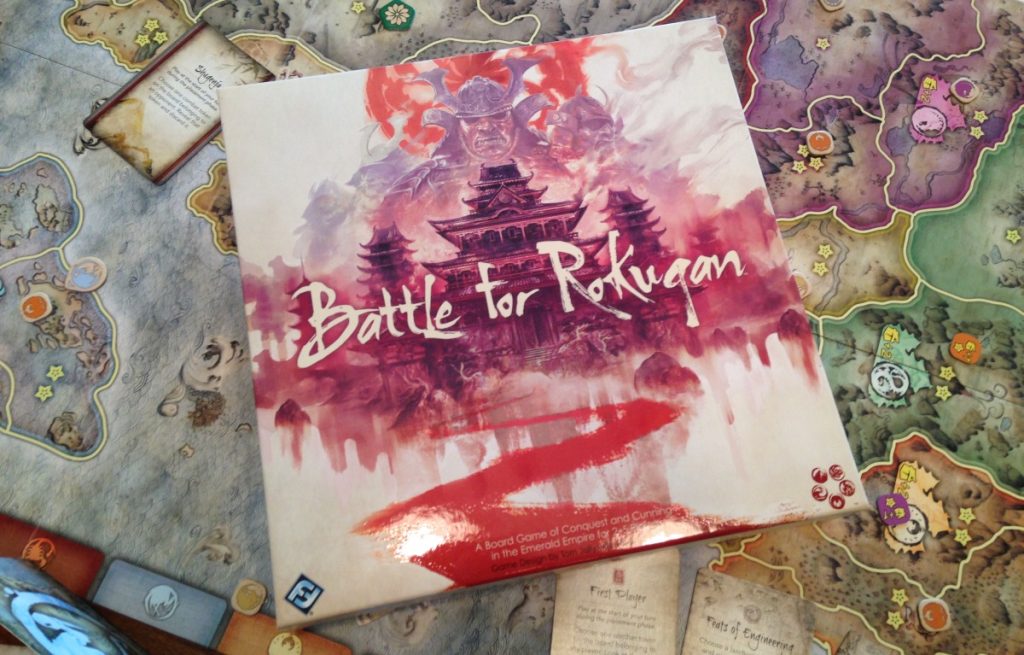