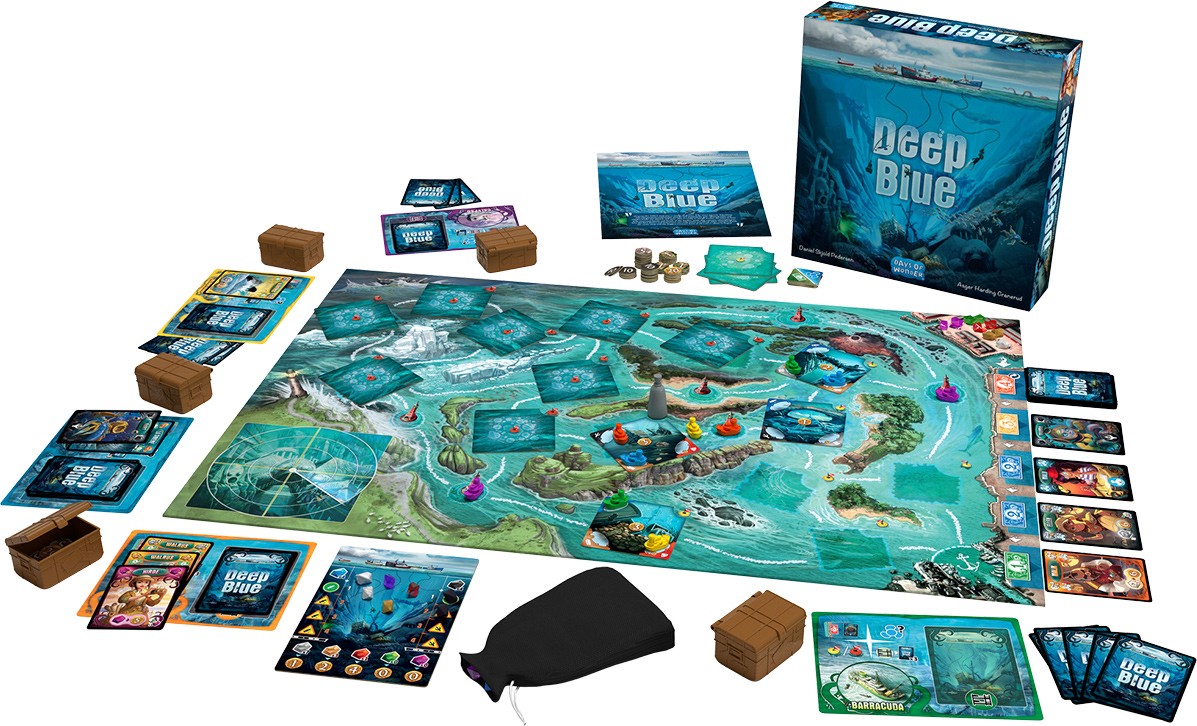 Ava: Happy news-time, my greedy fact-fiends. Quinns is busy with the business of podcasting, so only has time for a deep dive into a single plunge pool of news. That means you’ve got me taking you on a tour of Germany, a mission to Mars, a ride on a golem, to an archaeological dig, a meeting with some Prussian generals, for a poke under the games-bonnet and into the dark heart of Mordor.

Let’s get a wriggle on, we’ve so much to see.

Quinns: Yes! I’m coming for a quick splash into Ava’s news to talk about the new announcement from Days of Wonder, Deep Blue, because I’ve actually played a prototype of the darn thing.

Coming from Danish design duo Asger Granerud and Daniel Pedersen (who previously worked together on the excellent Copenhagen), Deep Blue is a game where players race ships around the board, jostling for position at treasure-stuffed diving sites. While there, a player can choose to initiate a dive for everybody present, and then the real fun begins.

The player who initiated the dive plays a push-your-luck game, except they’re pushing the luck of everybody on the dive, and players have to use cards in their hand to dodge sharks or scoop up extra treasure. What’s even more exciting than trying to grab jewels while avoiding the bends? Managing to give your friends the bends, while you stick around for an extra few minutes.

I had what I would describe as “medium fun” while playing Deep Blue. That said, “medium fun” with Days of Wonders’ stellar production values make for quite an appealing package.

…Then again, Days of Wonder seem to be continuing the habit of putting game logos on card backs, which is the worst sin available to humankind. Eurgh! How could they?! It’s like putting a bumper sticker on an Aston Martin.

Ava: This one is a little niche for the news, but is so far up my street it’s already put the kettle on and there’s nothing I can do to stop them crafting me a little wooden teapot.

Spielworxx, currently running a successful Kickstarter for German political simulator Die Macher, is also more quietly running a low print-run pre-order for Auf Der Walz. This game will see you taking the role of very literal journeymen, wandering the german countryside, barred from visiting home, with only your crafting abilities to make your way in the world. This is a very real tradition in German craft guilds, where people had to go auf der walz (it’s german for ‘on the waltz’) for three years and a day. The game looks a little like the lovely-walk simulator of Tokaido, with some chewier resource management and route planning wrapped around it. It could be really interesting! I hope it sees a larger (and cheaper) release. 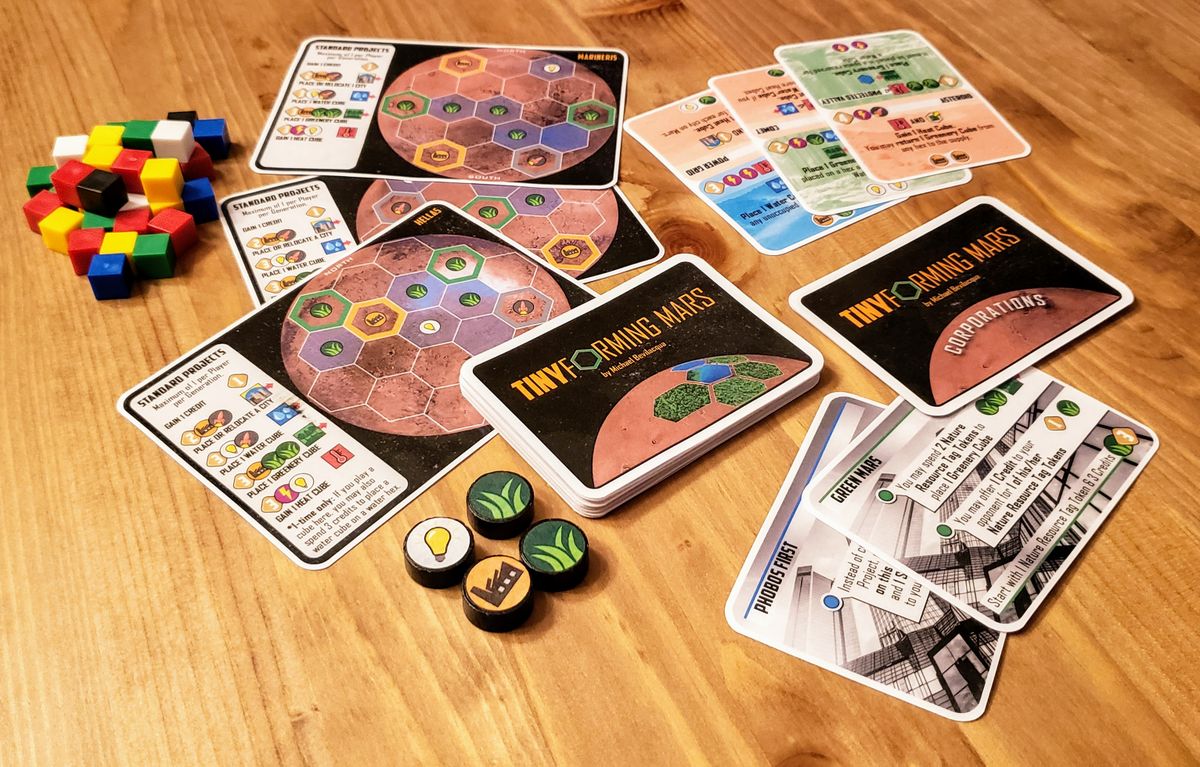 Ava: One of the things that flags a game up to us is when it jumps to the top of the boardgamegeek hotness out of nowhere. It’s often a self-perpetuating mystery or a marketing optimisation scam, but it can highlight obscure little projects that make me glad this hobby is so weird and particular.

Enter Tinyforming Mars, an adorable two player print-and-play take on some of the core ideas of Terraforming Mars, the widely lauded but locally criticised learny-spacey engine builder. A much smaller deck of cards, a tiny map of Mars and a bundle of tokens robbed from other games turns into a taut battle to be the best corporation on the red planet. People seem to like it, although most of the aforementioned hot hotness heat stems from people accusing it of ripping off the larger game. I’m just glad to be reminded of the huge swathe of freely shared print and play games hidden under the bedrock of hype mountain. 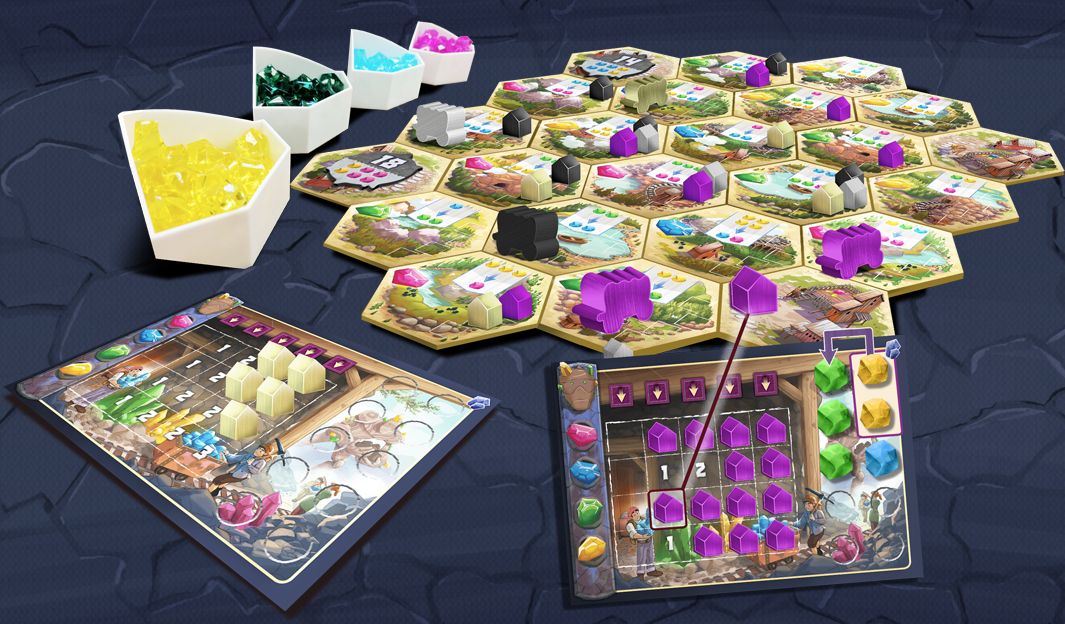 Ava: Spice Road was the first of Emerson Matsuichi’s interlocking Century trilogy, a series of shorter games that could be combined, Voltron-style, into slightly fiddlier games. Spice Road was also available in a less compatible Golem edition, for those who hated spices but loved golems.

That was supposed to be a one off, but somebody obviously smelled some money, as the second Century game, Eastern Wonders, is being published as Century: Golem Edition: Eastern Mountains. That’s a lot of colons for a pile of rocks. We reviewed the two spicier versions already, and are waiting on the third part of the trilogy to see if it turns them into some joyful behemoth. I’m not sure a different coat of paint is going to make much difference to most, but I suspect there are some golem fans out there who are glad they aren’t being left behind. 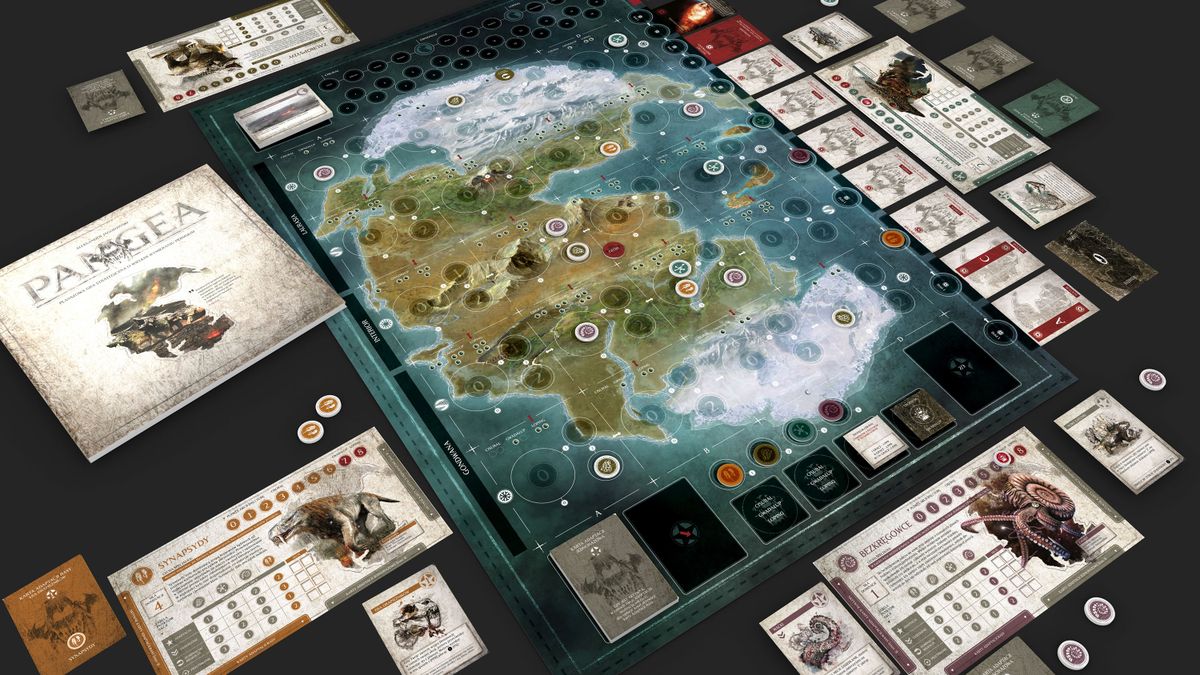 Ava: Over in the prehistoric forests of kickstarter, we have some gorgeous speculative paleontology in the form of Pangea. The art really makes this game stand out, showing a host of ancient beasts in glorious detail as they roam across the titular mega-continent.

That said, everything is drenched in text and complication and it looks to me like it could be an unwieldy beast-wrangler to wrangle. I’d probably follow the company recommended policy of waiting until we’ve seen more reviews in the wild.

That said, the invertebrate team have a nautilus mascot that makes me pretty eager to wrap my tentacles across a planet spanning continent. It may be worth a dig into the rulebook and videos to see if it makes your tendrils quiver.

Ava: Simulationist wargames are effectively the basis of modern role-playing, and have had a huge impact on board game design. This means it’s a bit lovely to have a really solid video history of the Kriegspiel and the origin of wargaming. Built in Prussia for very rich people, different iterations of Kriegspiel had scaled terrain, modular boards, custom dice and a DM-like umpire with ultimate power over how the game played. Honestly, I’m surprised it’s not coming to kickstarter soon. 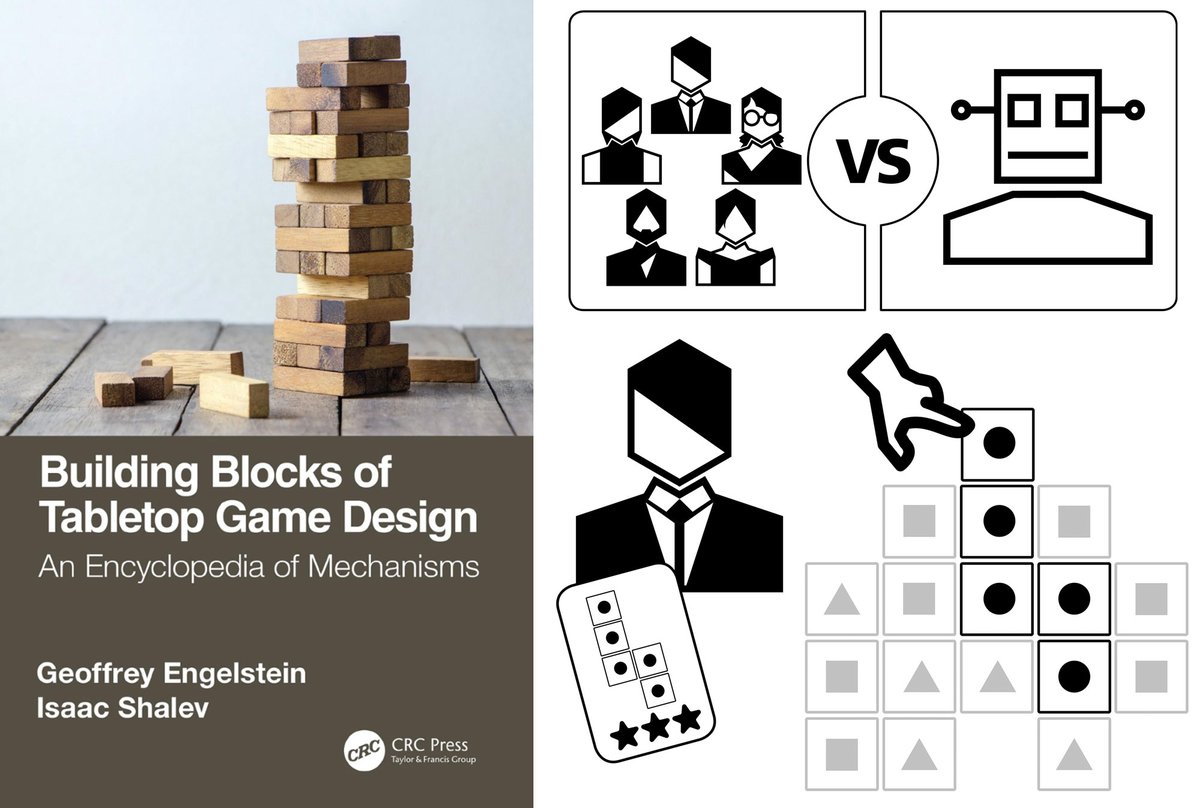 Ava: Meanwhile, Geoff Englestein got in touch to tell us about his latest book, written with Isaac Shalev. Building Blocks of Tabletop Game Design (Amazon UK link here) is an encyclopedia of game mechanisms, allowing design students to dive into the nuts and bolts of ludic tickery.

With illustrations that pay homage to lovely Korean gameshow The Genius, as well as descriptions and examples for each bite-size building block, it looks like a lovely piece of work. It could be the definitive way to end tedious arguments about specific terminology. It could also be the beginning of the same arguments, depending on your perspective and/or friends. 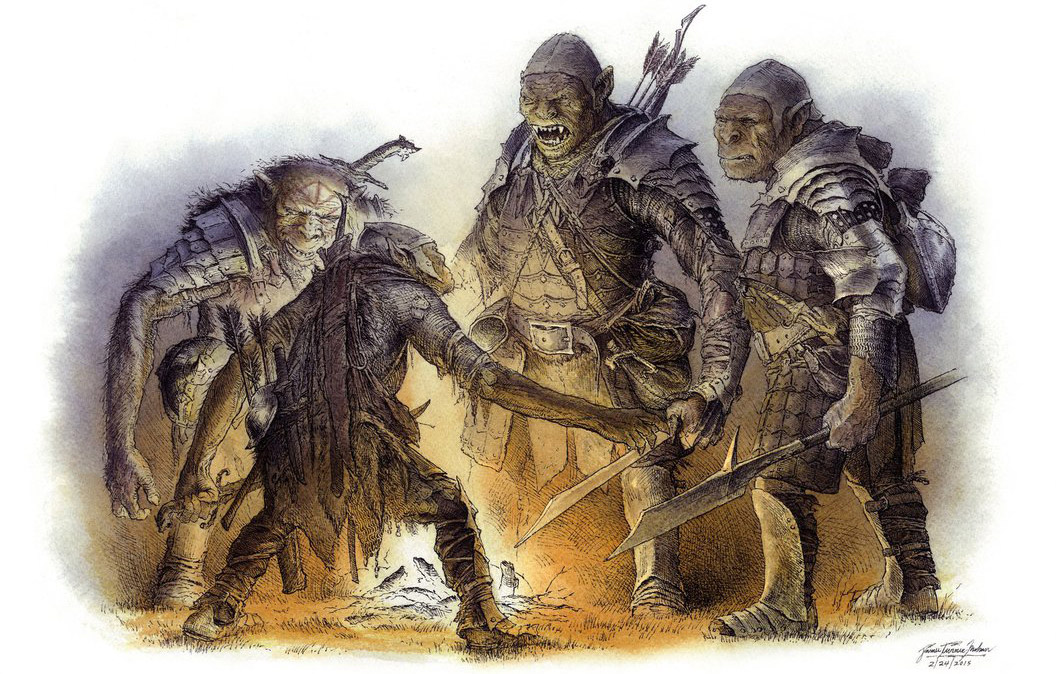 Ava: Finally, this week’s further reading is a challenging piece of thought-craft. James Mendez Hodes has wrapped up a two part exploration of the racist origins of Tolkien’s orcs, and how those dubious inflections have reached out across a century of media. In particular, the second part focuses on Dungeons and Dragons, its fixed concepts of races, and the biases masked by fantasy trappings. This may be an uncomfortable read for people (like me) used to turning certain creatures into monsters for the sake of a game night, but provides really positive ways to undermine and criticise these tropes. It’s a smart, enlightening read.

I particularly like the part noting that Games Workshop accidentally avoided a lot of these problems (arguably replacing them with traditional British class prejudice) when it cut their Space Orks from the same cloth as eighties football hooligans. This might just be because I was an ork player as a kid, and have always been fascinated by the weird specificity of that particular iteration of the much maligned greenfolk. They just seemed so joyful, which felt like a respite from the rest of Warhammer 40,000’s ultra-bleak setting. Significantly more nuanced takes can be found in Mendez Hodes’ thorough and personal think-piece. 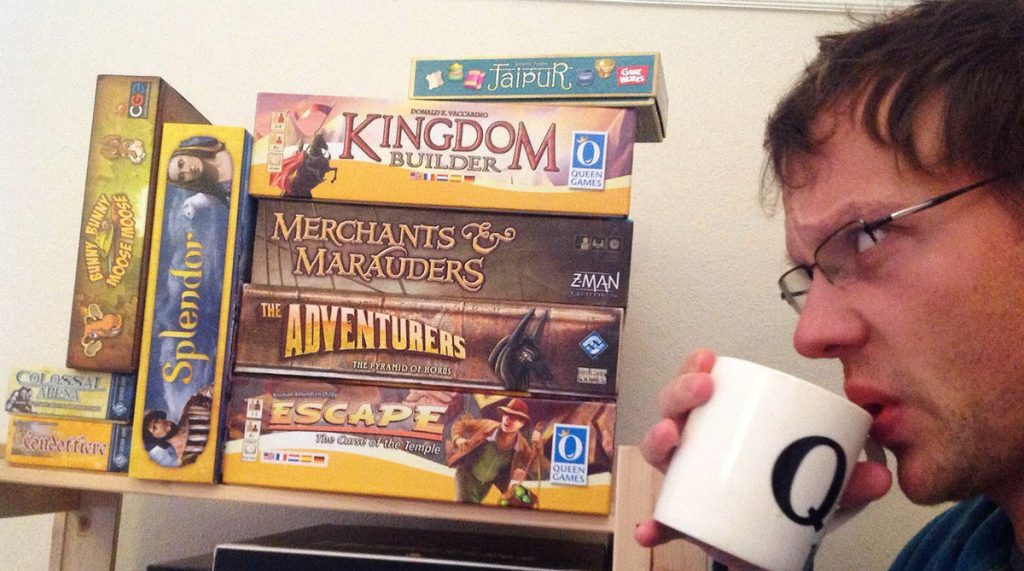 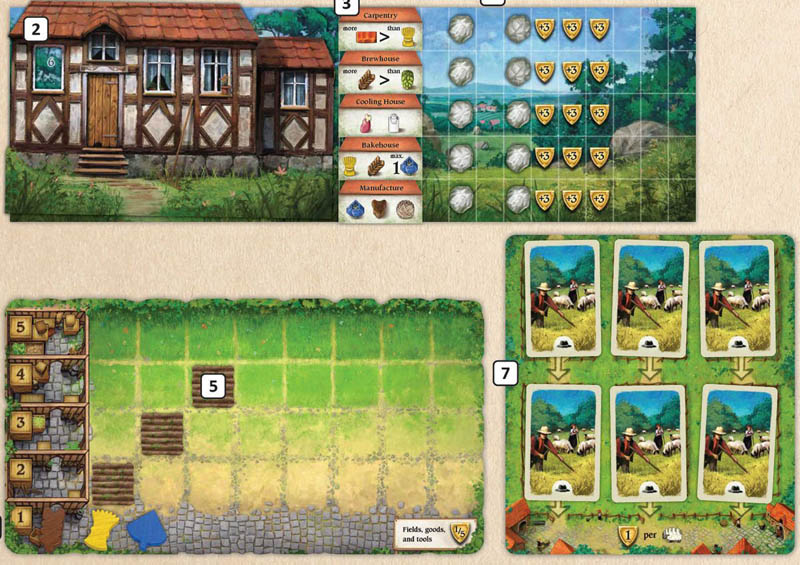