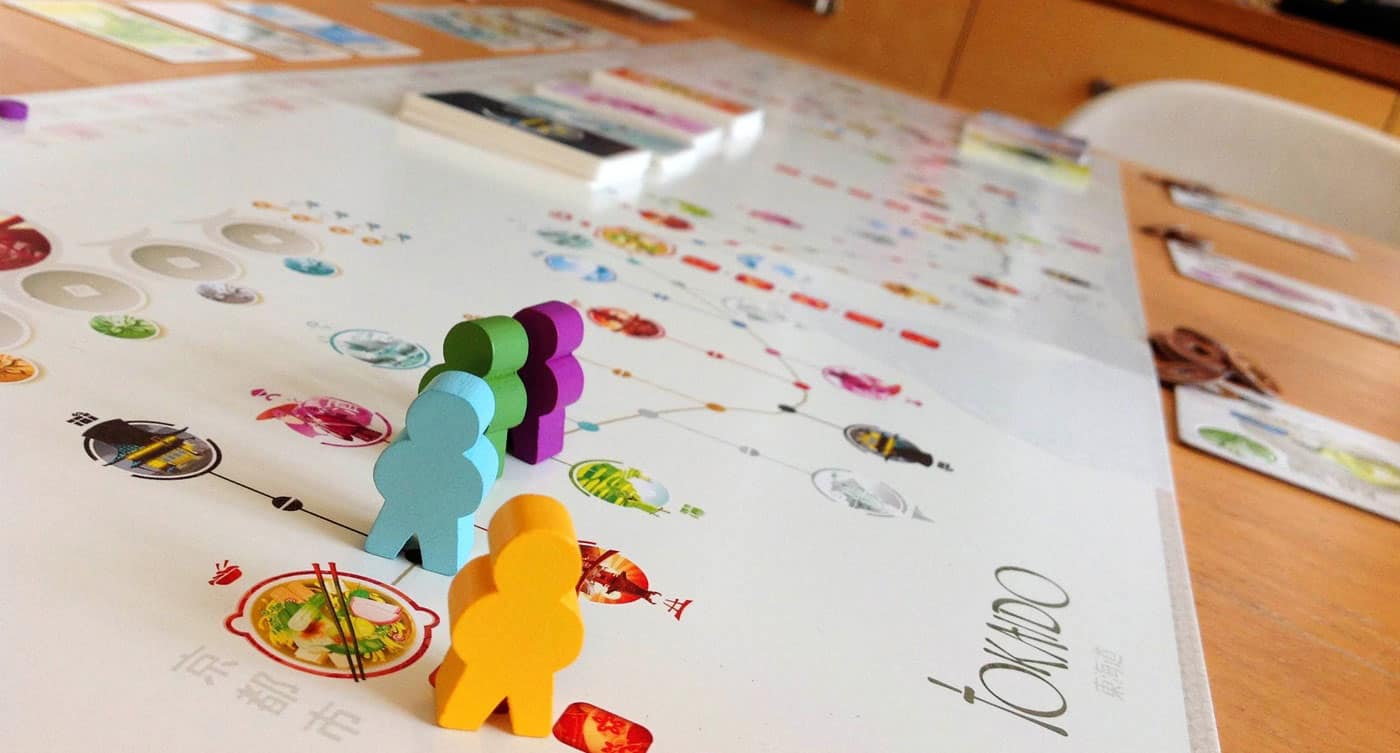 Paul: There are two game designers that we’re big fans of here at SUSD towers, designers whose pictures we’ve hung on our walls, whose altars we’ve erected in our rooms, and if you know us well, you know that we don’t erect things very often.

Antoine Bauza is one such designer deserving of our erections and you may well have seen us talking excitedly about two of his games before. We’re big fans of the co-op spirit-buster that is Ghost Stories and way, way back in our fourth episode we reviewed 7 Wonders, a fantastic city-building card game that’s brilliant for both beginners and even the most jaded of experienced players. Antoine has a fine pedigree.

Quinns: And now we’ve got Tokaido, a lush, luminous and lovely game that’s about nothing more than taking a long walk across Japan.

Paul: And spoiling that walk for everyone else. 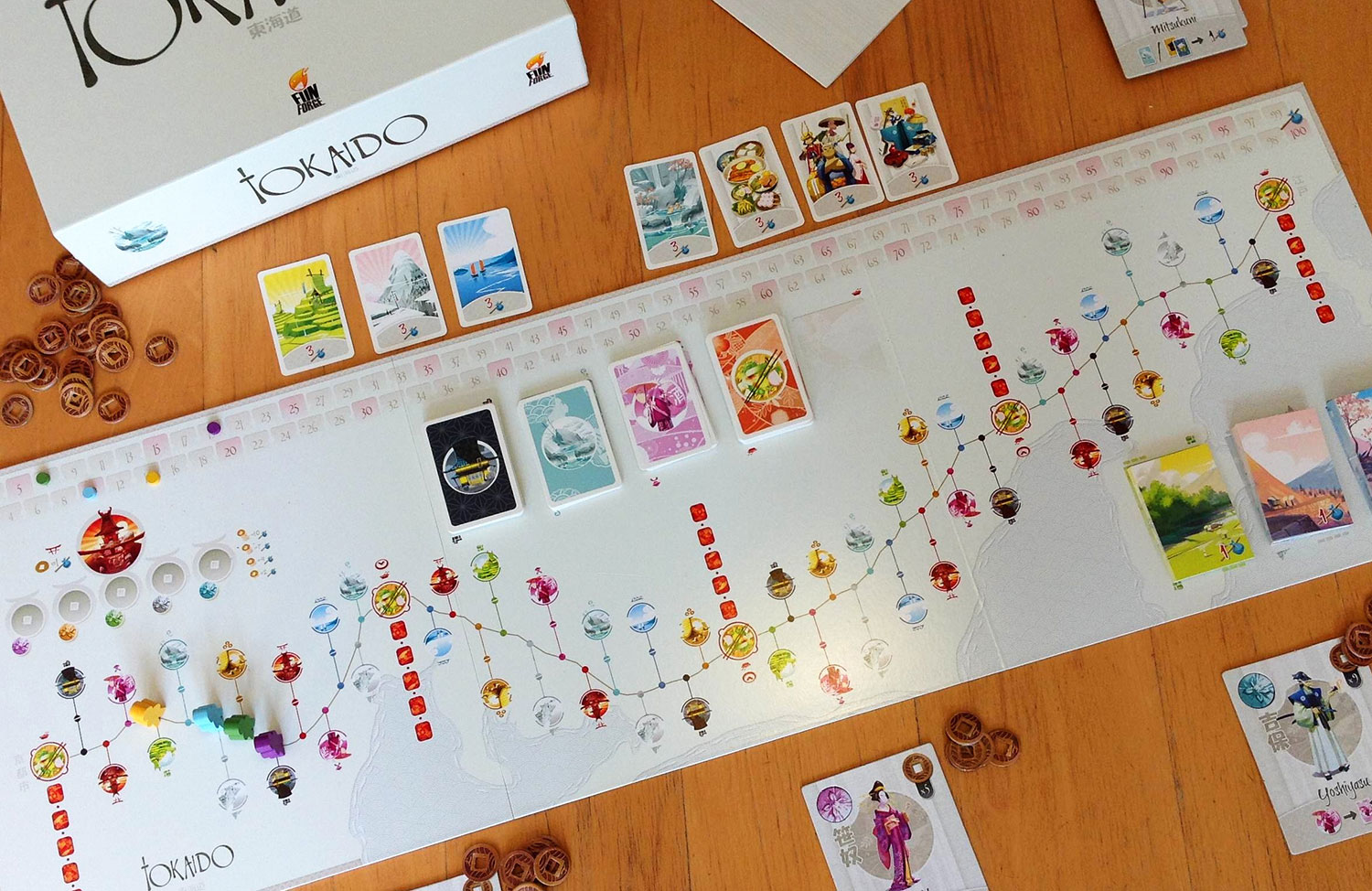 Quinns: Here’s what’s insane about Tokaido. Most board game designers have a style. Corey Konieczka’s games are all overblown monsterpieces of theme. Stefan Feld makes games as complex and mathematically beautiful as snowflakes. Vlaada’s stuff is always, always like he’s handing each player a cup, filled to the brim with possibility & nonsense, then the fun comes from watching your friends upend these cups in their laps.

Bauza? Bauza has flexibility. Ghost Stories is a TERRIFYING co-op battle against more half-dead horrors than you’d find in your local bingo hall. 7 Wonders is a calm, competitive building game. Chalk and cheese.

Paul: Well, there you are, making your way across Japan, from Kyoto to old Edo, across a board that’s so bright and charming it almost shines. You’re enjoying the sights along the way and, boy, are there sights to enjoy. You’ve got hot springs to dip your travel-worn toes into, villages brimming with exciting souvenirs and taverns so packed with hot food that you can smell it a mile off. Then there are the actual sights themselves, beautiful vistas that demand attention like the earth’s own mewling children. 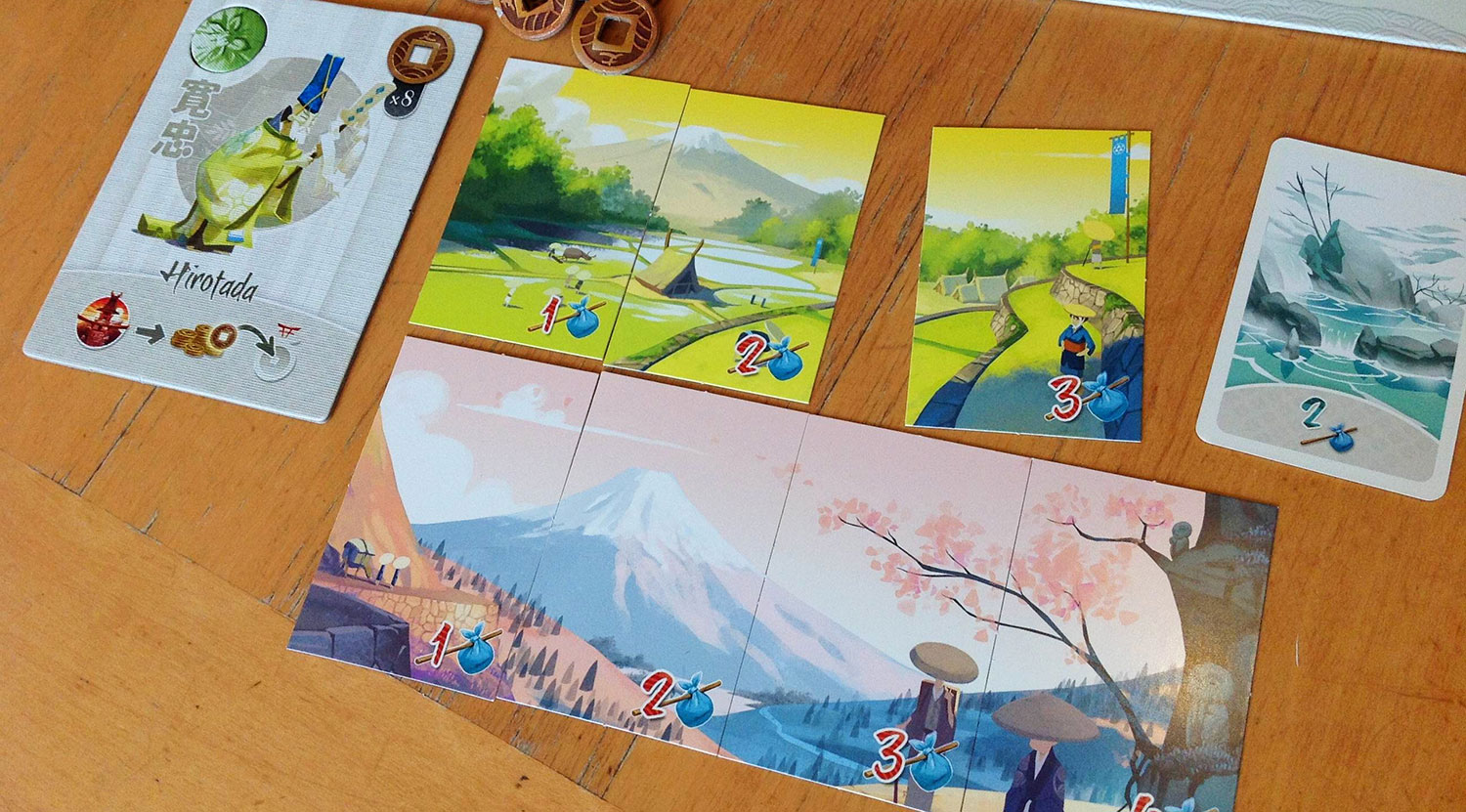 Each one of these encounters is a space on Tokaido’s board, and all you need to do to enjoy it is land on it. It’s the simplest thing, because in a relievingly modern piece of design, you can simply move as many spaces as you like.

Oh, I suppose I should add that whatever you land on, wherever you tread, nobody else can step. Whatever you enjoy, you immediately exclude everyone else.

Quinns: This theme is what I love about Tokaido. Despite its unparallelled loveliness, this game is a weapon you can point right at the forehead of anyone who has the gall to think they know what board games are. Tokaido will simply blow them away. It’s just so pretty and easy-going. 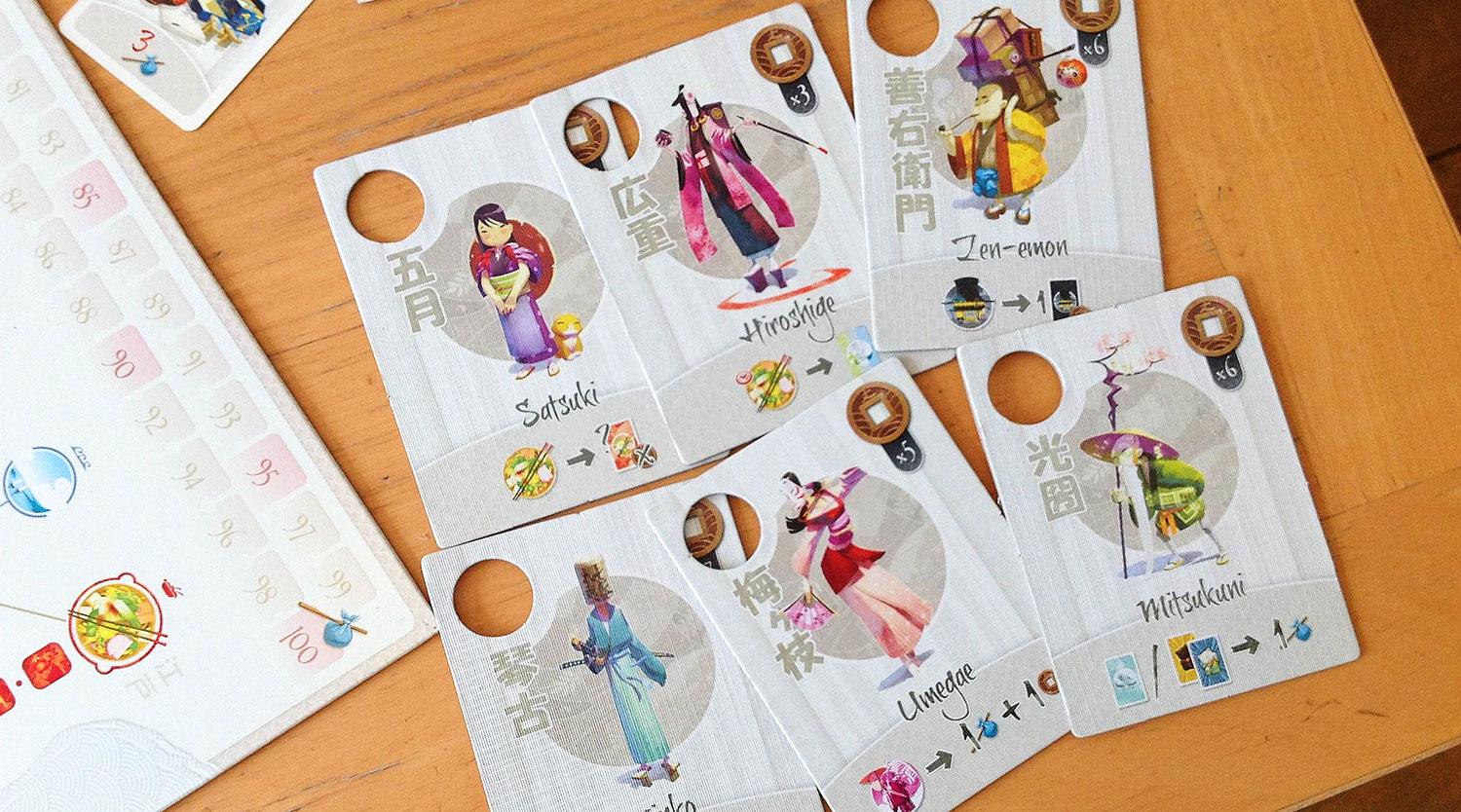 As to how the game works, once again, we’ve already stealthed an entire rules explanation into this review. Did you miss it?

Players all line up on the starting Kyoto space, having picked up their personalities. Maybe you’re the geisha, the painter, the wobbly elderly dude. One by one, you’ll begin your journey by picking up your pawn and moving them as far down the road as you like. To a farm, say, where you can work to earn a few extra pennies, or a village where you can spend them.

Next, the player who’s furthest behind on the track takes their move. It’s just so easy!

Except it’s not, is it? Oh, no. Were you paying attention? If the player furthest behind on the track always moves next, that means they can stop at EVERY space, pocketing EVERY reward, until finally they’re forced to leapfrog someone, coins and trinkets jangling in their pockets. This is Tokaido. Weighing up what you want, with blocking your travelling companions, with the possibility that they’ll literally pip you to whatever post you had your eyes on. 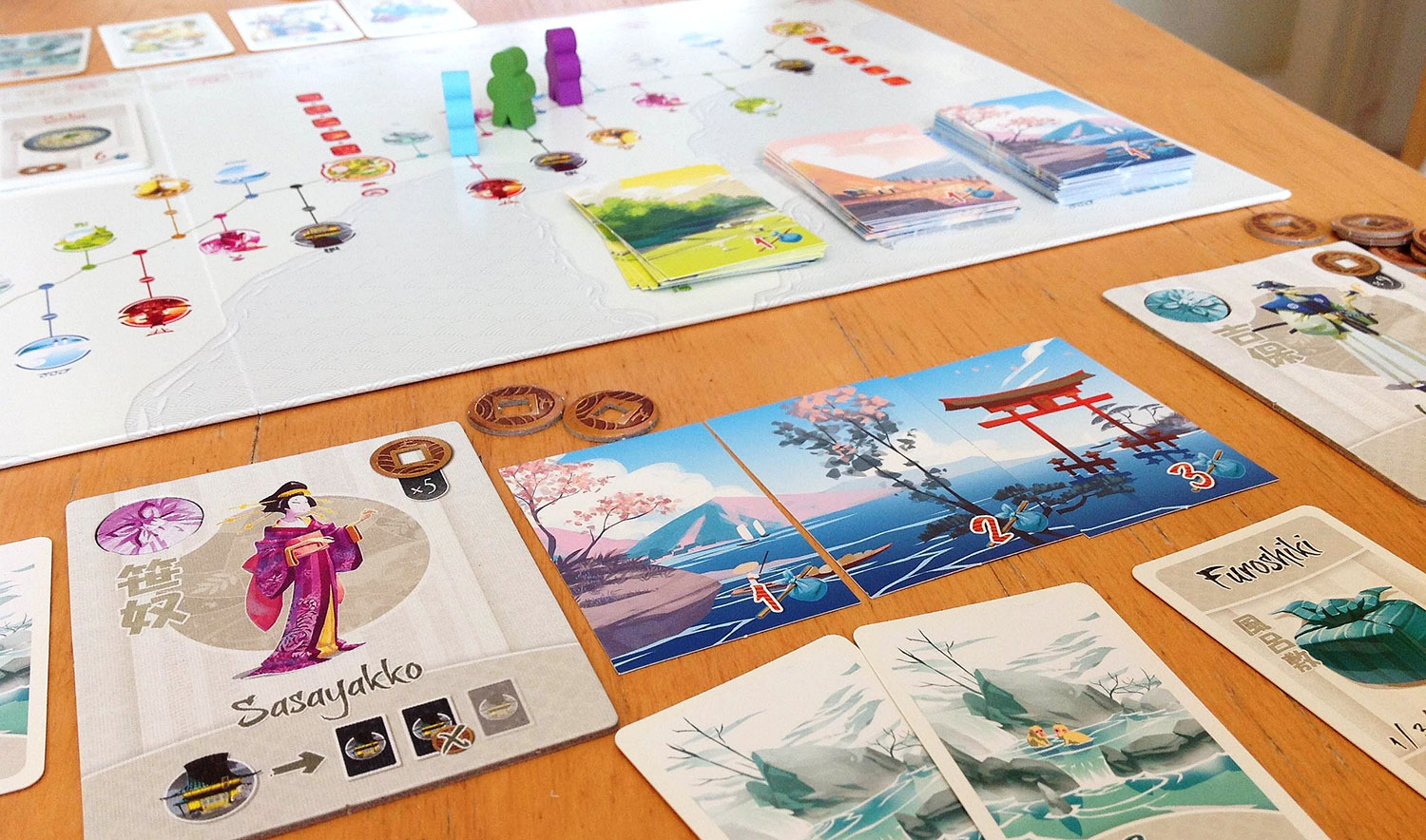 Paul: The core of Tokaido is making this simple choice over and over again: where do you want to go next? What can you bear to skip over?

Which is lovely! A lovely choice!

Paul: A lovely nightmare, though.

Quinns: I had a lovely nightmare about you the other night, w-

Paul: So all of these rewards are worth points. At the end of the journey, which takes just 30 minutes, the player with the most points, with more Japan than anyone else, is the winner. Tokaido’s about taking life into your hands, squeezing like hell, and drinking every last drop of culture and experience that drips from your fist. It’s a philosophy in a box, and quite possibly the nicest game we’ve ever seen. 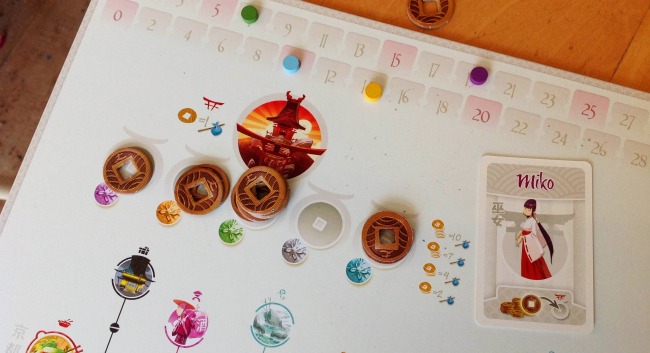 Quinns: It’s breezy, but it’s not easy, is it? Every stop on the road is a unique, crunchy little quandary.

Take the temple, seen above. On arrival you can drop one, two or three coins into the donations box, for one, two or three points. Except at the end of the game, the person who donated the most gets a colossal TEN POINTS. Cue one player becoming the Richard Dawkins of feudal Japan and doing everything they can to fend people away from religion.

Arrive at a village and you draw four souveniers to buy, with random prices. What’s important are the four categories they come in. Objects, clothing art and snacks, which together make a set. The first item in each of your sets is worth a paltry one point. The card that completes a set is worth seven. Tokaido’s great at distracting you with these sorts of micro-objectives, with muddy the road ahead. 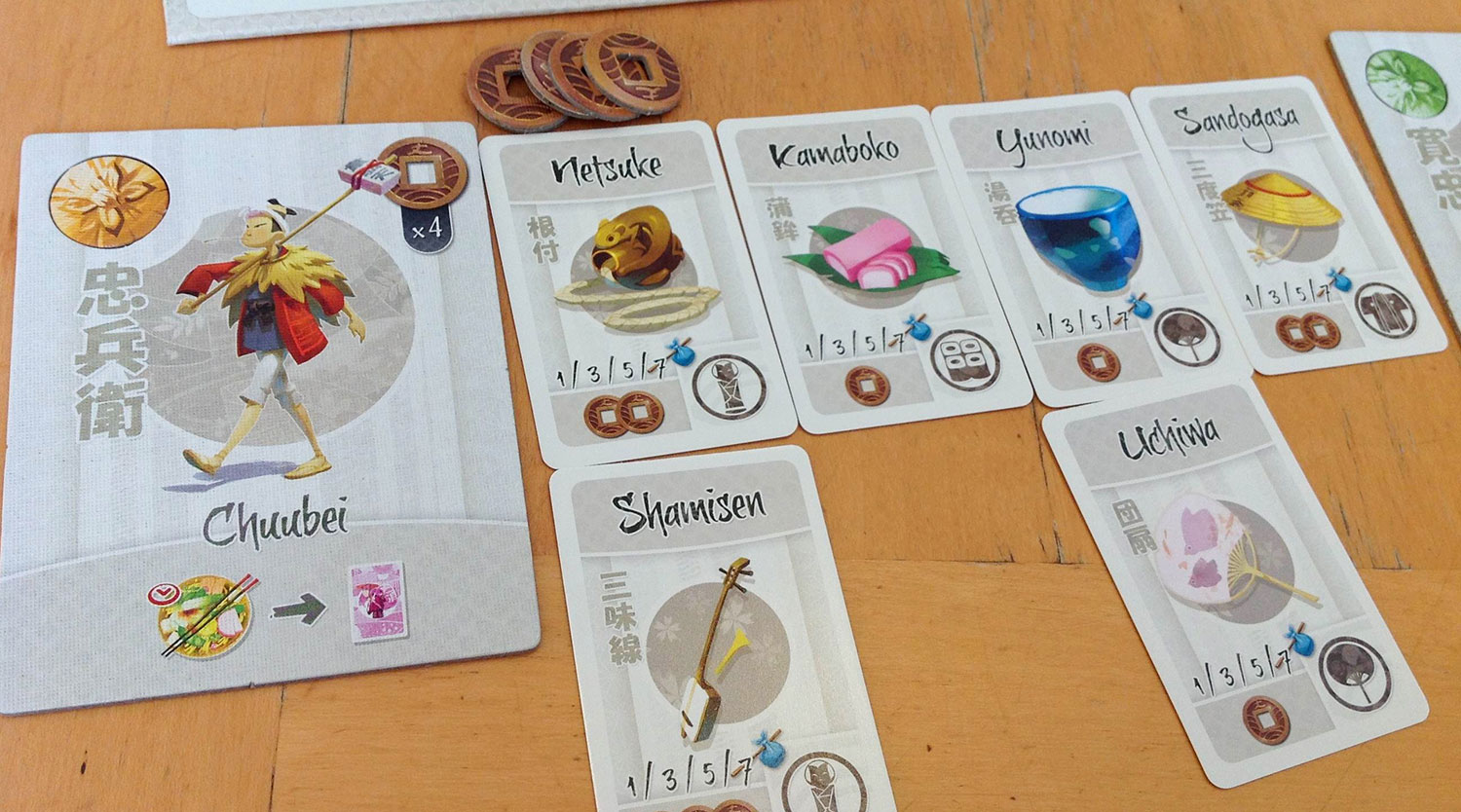 Then we’ve got vistas, which demand a similar dedication to get the most out of them, but are free. And that’s great! Because inns.

Paul: Oh god. Inns. While it might make sense to meander behind the pack, you really can’t be slow, because getting to an inn last can be awful. These are compulsory stops for all players, giving travellers and players both an opportunity to catch their breath, as well as yet another opportunity for you to snatch something good before everyone else.

Taverns have a number of meals on offer equal to the number of players, which once again have random prices. Filling your belly is worth a generous six points, but showing up last sees you running the risk of another player grinning and handing you, at best, an agonisingly expensive fish platter, and at worst something you’ve already eaten. Because among Tokaido’s uniquely epicurean cast, that’s not something you’re allowed to buy. 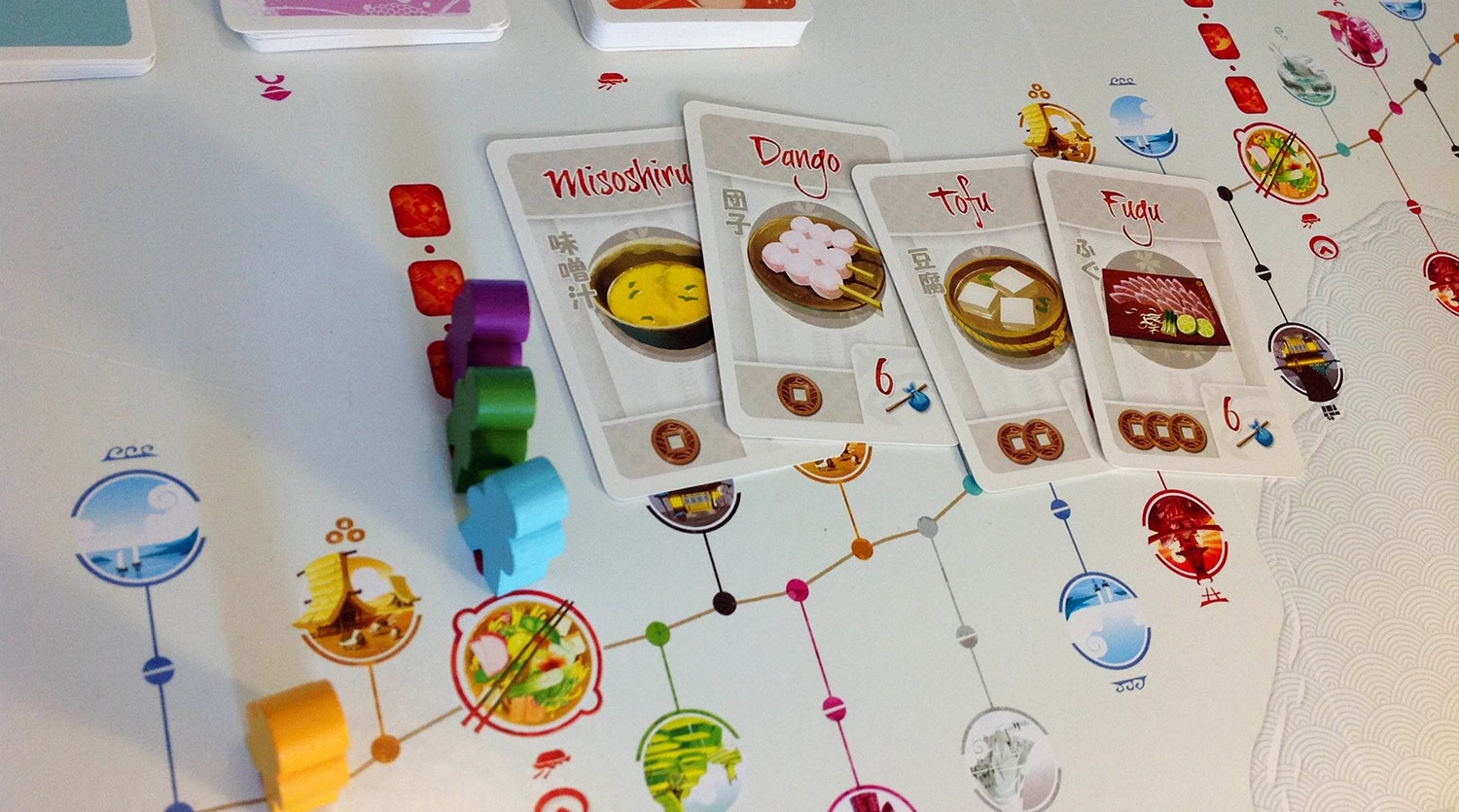 Anyone can play Tokaido, and be rendered flailing like a T-Rex trying for a hug. Simon knows you want to complete your vista collection so he makes sure to sit on every space before you do, which gets him tangled up in starting more vistas than he can complete. Tom grabs every spot you left behind and so gets to drop all of his money on trinkets and donations, then suddenly finds himself destitute. Really, success in Tokaido means being Japan’s biggest jerk.

Quinns: But you’ll have such a beautiful experience along the way. It’s an absurd achievement considering this is just 30 minutes spent with some cardstock, but Tokaido actually feels like a memorable trip. And it’s just so gorgeous. I’ve never played a prettier game, and Paul says it’s one of the best-looking board games he’s played in a long time.

Paul: This is one of the best-looking board games I’ve played in a long time. 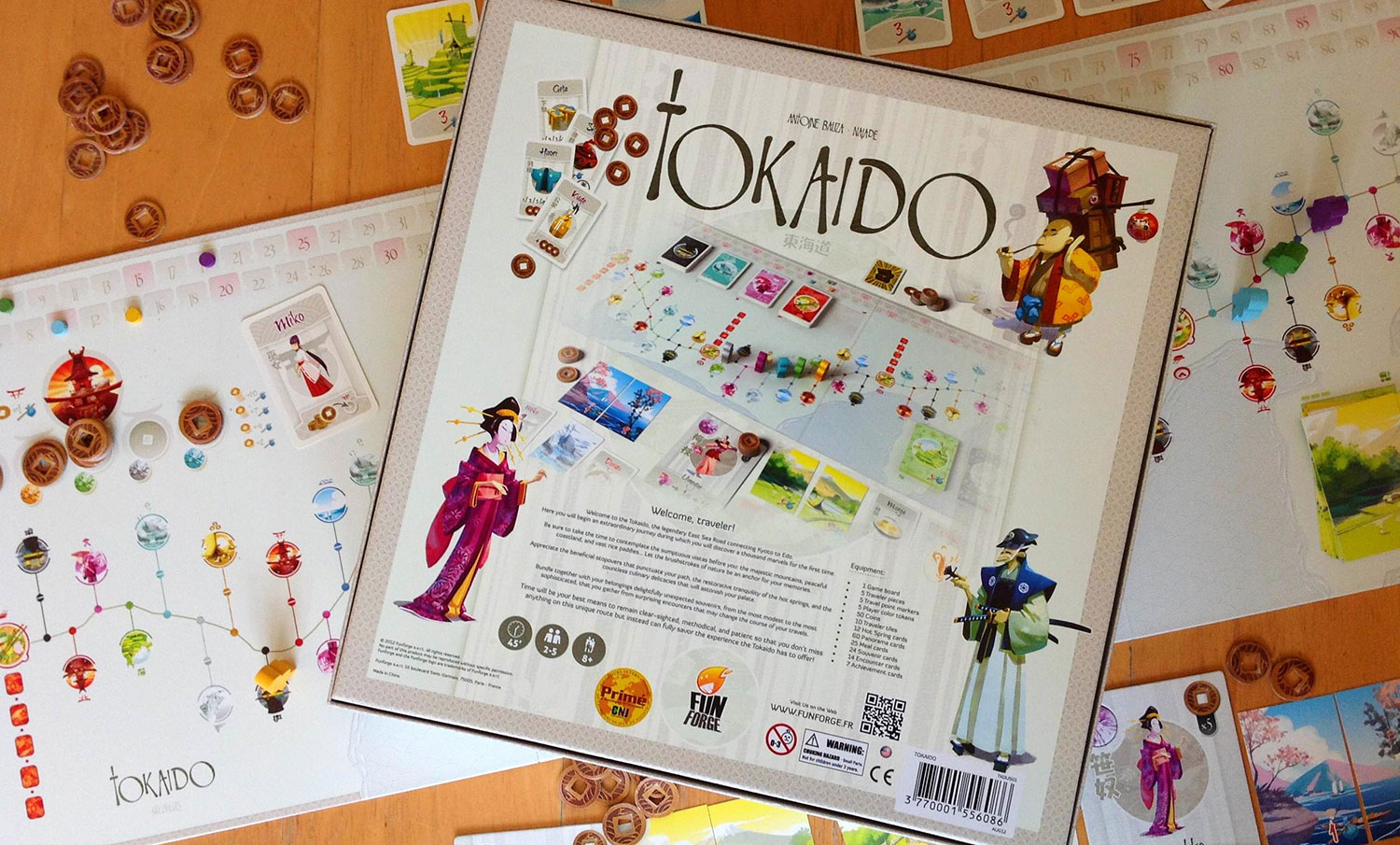 Paul: Yeah. And yet.

Quinns: I wish we could recommend this game wholeheartedly, but I have to put a dampener on things. Tokaido absolutely lacks longevity. Once you’ve had your first game of you’ll have seen most of what it has to offer, which is problematic for a game that thrills in discovery. It was fun enough that we immediately followed our first game with a second, but now? We’re all just looking forward to that moment in a year’s time when we can dismount Tokaido from my shelf and it’ll feel brand new again.

Paul: The thing is, I’d still recommend this game, even though it’s not as varied or as replayable as the sort of things I usually enjoy. What Tokaido lacks in variety it makes up for in accessibility and in parsimonious, precise design. This is an excellent entry-level game and it’s also very quick, meaning its a great thing to slide under the noses of non-gamer friends as part of your initiation ritual. Still, it’s true that more dedicated and demanding gamers may well decide it’s too light and too limited.

Quinns: But it IS a fine game.