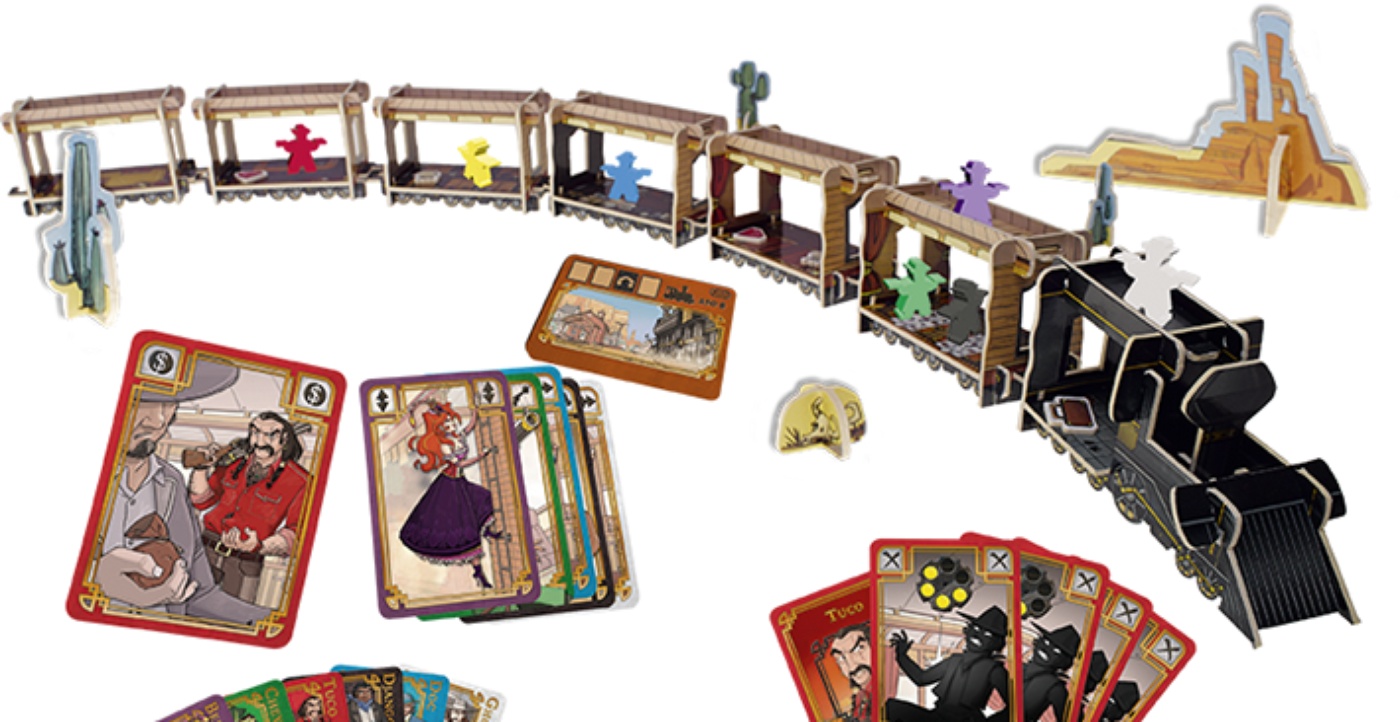 Quinns: Morning everybody! This is the second time we’ve used Colt Express’s 3D train as our header image, but that’s because it’s a 3D train. I live in hope other board game publishers are reading this and paying attention.

Heralding the game’s release in a few months, Ludonaute has published an exhaustive official site. The site contains a manual, and the manual contains good news! This game’s going to be an absolute cluster****. But in a good way!

Similar to SU&SD favourite Robo Rally, players in Colt Express will be programming their bandits by placing cards either face-up OR (when the train is in a tunnel) face-down. These cards are then revealed one after another, seeing that player’s bandit movin’, shootin’, punchin’ robbin’ or movin’ th’ dangerus’ marshl’ tokn’, though whatever you do it’s bound to have your friends yelling in anger and frustration because it ruins their plans (plans which were pretty half-assed in the first place because you’re programming your bandit from a random hand of cards, so their plans are now quarter-assed, or even one-eighth-assed).

In further news of games we’ve covered before but not have the squeaky lil’ details, Illegal sounds absolutely fantastic.

We now know that this card game from the creator of Archipelago will see players being dealt a secret “dealer” role and a “buyer” role. So maybe you have all the drugs, but want all of the cars. In the first half of the game players leave the table and wander the room, striking deals, and every three minutes they can return to the table to pick up a few new cards from the “docks”.

Why not just find the corresponding dealer and buy everything he’s got? Because of the second half of the game, where players become “judge and jury” (the game’s words, not mine) and try and figure out who’s who. So you flip two cards, revealing (say) that someone was the drug dealer, but wanted all of the cars. Then it’s just a game of trying not to sweat visibly. 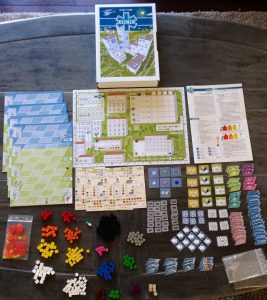 I probably can wait for CLINIϽ, because for a game about running a nice hospital the all-caps and backward C unsettles the lizard parts of my brain.

It does sound neat. Players are all trying to build efficient, three-dimensional(!) hospitals, hiring doctors and nurses but also engaging in the peculiarly American problem of figuring out where to put the ever-growing parking lot. It all reminds me very much of a more complex Quarantine, which is no bad thing.

That name, though. It fits a game much less po-faced than this. One where you hire under-qualified doctors and try and slip vanloads of patients in the back entrance of your opponent’s hospital while they’re having lunch. 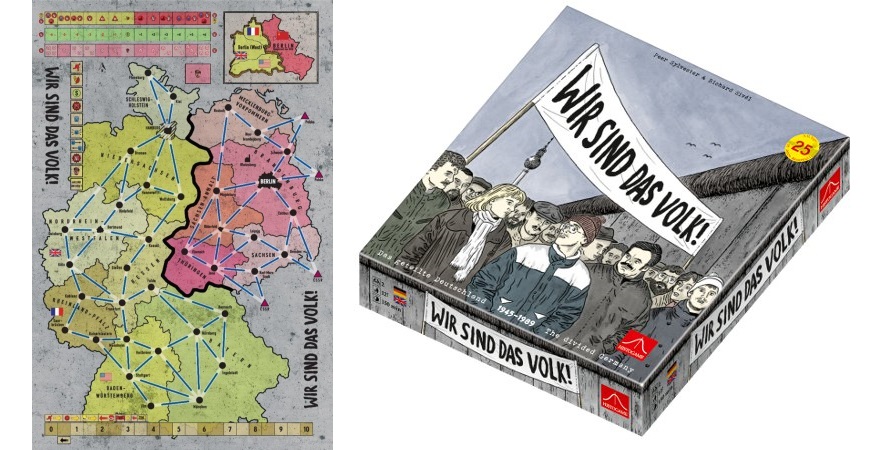 Looks like I’ll be getting my grubby realism from Wir sind das Volk!, an upcoming 2 player game about the dissolution of barriers between West and East Germany after WW2. It sounds as historical as it does personal, reminding me of Twilight Struggle or 1960: The Making of the President. Tell you what, though. Those games don’t have art design like this.

Weird bit of trivia. If you go to the museum of the Berlin Wall in Berlin you can hear all these amazing stories of how people escaped East Berlin to get to the capitalist West. What they don’t tell you is that plenty of eager socialists did the same dangerous journey in reverse, or that it was common for men and women to cross over just to get away from failing marriages and the like. For a while, it was a ironclad means of escaping your past.

Such an insane thing, to imagine a city being divided in half. 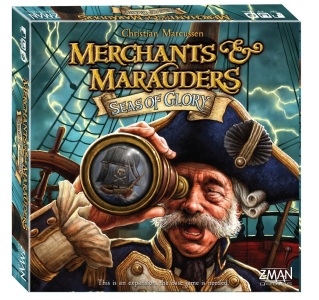 An expansion is coming for Merchants & Marauders! Remember? The game of Caribbean captaincy we reviewed two and a half years ago? No? Well, it’s getting an expansion. It’s going to add smuggling, crew satisfaction, changing winds… look, how can you not remember it? It had 3D chests and the meanest combat, and you could get a ship’s doctor. It was great! Great game. Lovely board. Happy days. Innocent days. 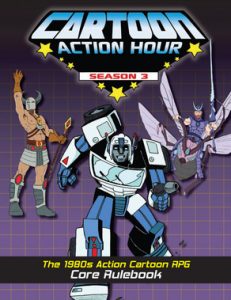 AND FINALLY, do you know about the Bundle of Holding? I didn’t. Turns out it’s an indie pen’n’paper RPG version of video games’ Humble Bundle. A whole load of games available at a deep discount, and the current one looks fantastic.

The 3rd edition of Cartoon Action Hour is my standout. A roleplaying game of Saturday morning cartoons. There’s also Tragedy In Five Acts if you’d like to see a new, terrible Shakespeare play emerge in front of you, or Another Fine Mess if you felt like a dungeon crawl with all the players controlling animals.

Your friend playing a relentlessly cheery dog while you pretend to be Penny the fearless falcon? Sounds like just another Saturday night at SU&SD. 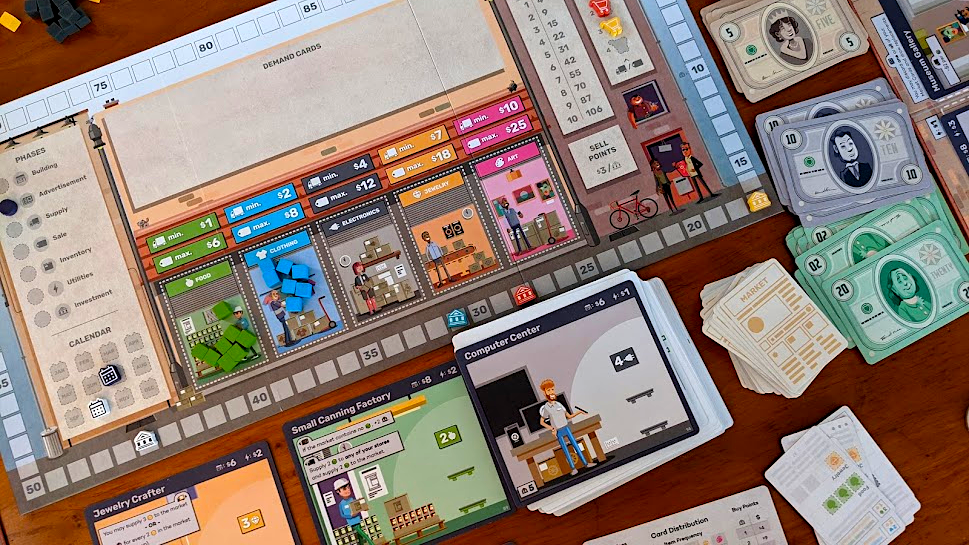