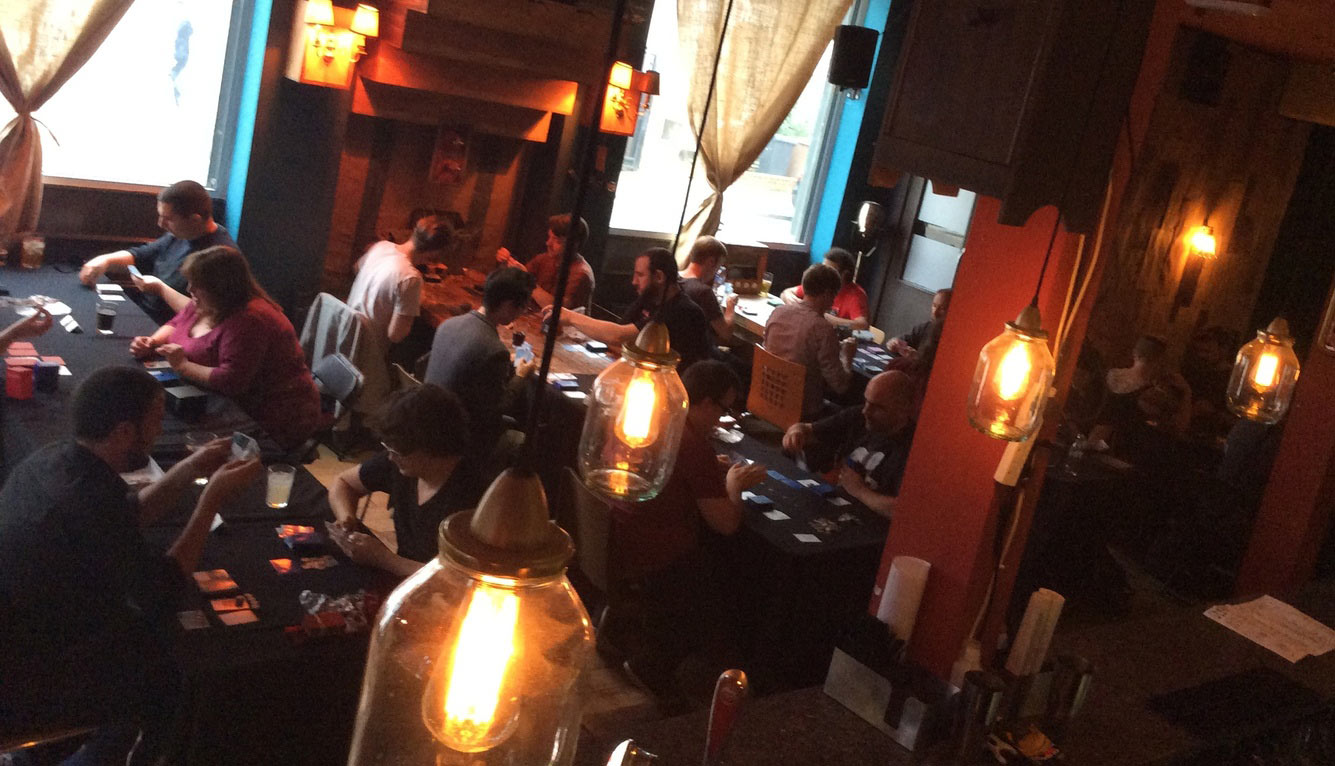 Quinns: This weekend I did something a little scary (and a little sexy). I’ve been attending casual Netrunner meets for almost a year, but this month I finally took the plunge and organised my very own tournament. Forty strangers and a few of my friends were brought together under one roof for the noble pursuit of cyber-warfare.

I thought sharing how I did it (and what I learned) could be useful for a few of you guys, and maybe coax you into running something similar. Due to having all the fun in the world I’ll now be holding these monthly.

Don’t live near any game shops? No problem. Because I am a grimy reprobate, the very first thing I decided was that I wanted to set my event in a bar. Because… well, why on earth wouldn’t you?

Most tournaments I know are run by conventions or game shops, neither of which are designed for people to sit in all day. A bar isn’t just going to be a nicer space, with drinks, snacks and toilets you could lie down in after a singularly horrible loss. It’s probably going to have nicer tables, too.

Admittedly, finding a venue was tough. I eventually found London’s Scenario Bar (which actually has a ton of board games and video games in the basement), but before that I was having all sorts of nonsensical conversations with pub managers who didn’t understand what they were getting into, or (more often) were part of chains where the handbook didn’t cover this kind of thing. For that reason, your best bet is to find an independantly-run bar, pub or cafe that’s going to like the sound of you getting a crapload of people in there on a saturday afternoon. Similarly, encourage your attendees to eat, drink, host their own parties there and generally make the place happy to have you.

Once I had my venue I could see how many games it could host and start selling tickets. 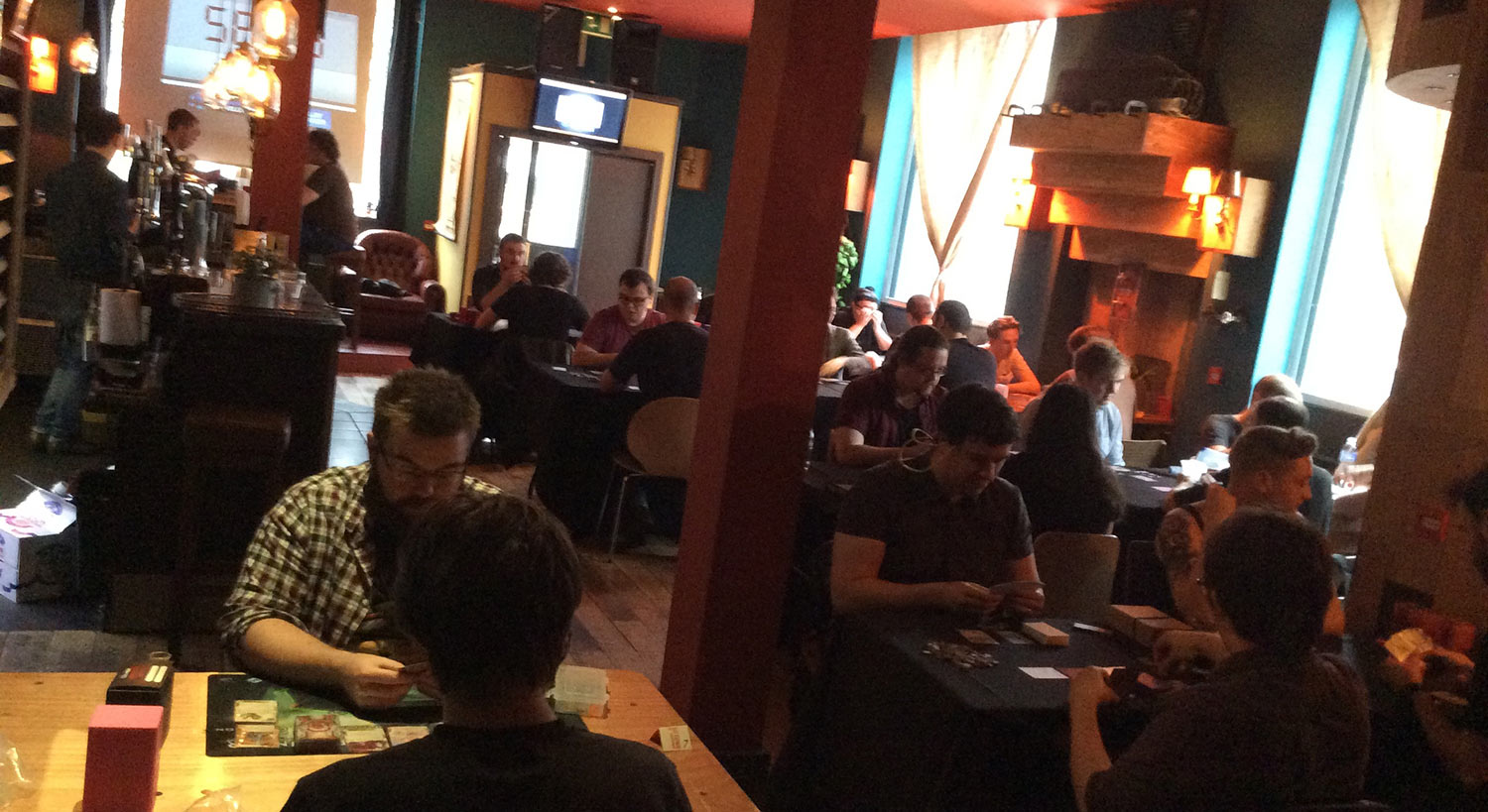 I used Eventbrite to sell tickets and email my attendees, which was effortless and hugely flexible.

Who’s your tournament for?

If you’re trying to crown the king or queen of your local meta in a definitive battle, you should probably shape your day differently than if (like me) you just wanted to have fun and get people on the fringe more into the game.

The way my local game shop runs tournaments is that, because of how they number the tables, the worse you do the further towards the back of the shop you go. I structured things the other way round. Beginners stayed upstairs with the daylight, music and the bar, while pros were consigned to the (roomy but quiet) basement seen below. If you’re new, you get the nice atmosphere. If you’re a pro, you probably love the game already and don’t need our help. 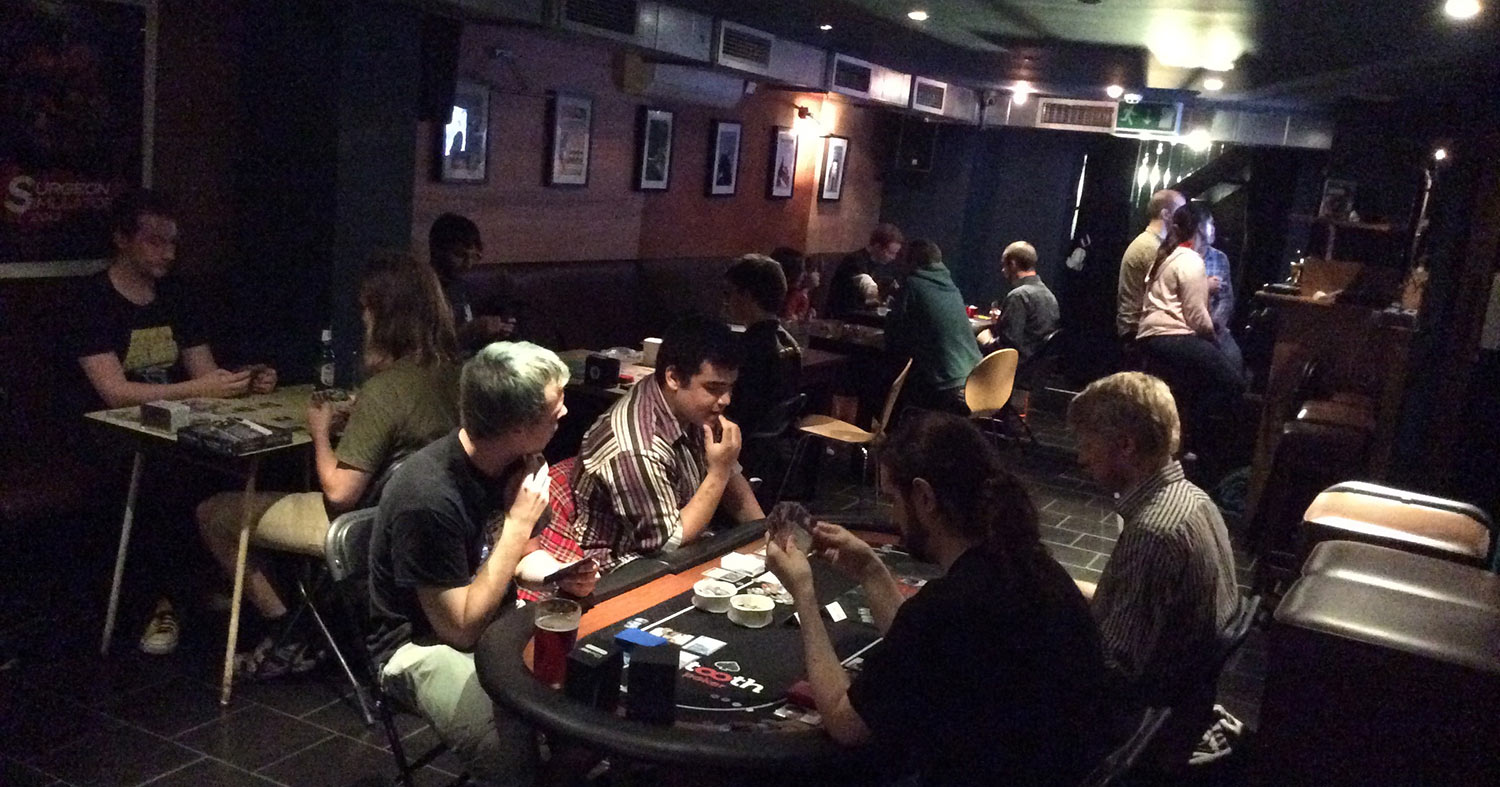 NRTM is Netrunner tournament management software for iOS devices. It’s so good that you’ll want to borrow an iPhone or iPad from a friend or attendee before you use anything else. The plan was to use an Apple TV to stream the app onto a projector so everyone could see the day’s stats, their standing and the next table they were playing at, but that didn’t work so we just used some crap website to run a dramatic timer and I shouted table assignments.

NRTM is not to be confused with ANTM, which is (a) what I keep calling it and (b) the abbreviation for America’s Next Top Model.

I was on-hand for rules questions or to log results so I didn’t get to play, but that’s fine. I’m the kind of person who gets way more pleasure just helping people have fun. In future, if we have an odd number of players they can play casual games against me while they get their bye for the round.

Ultra technical Netrunner tournament paragraph: I chose to end the tournament and give out prizes after five rounds of swiss, with no cut to double elimination. That’s absolutely not enough to determine a real winner with 40 players. I also chose not to care, because five rounds of swiss is roughly where Netrunner stops being fun and starts becoming an endurance test. So even though we’ll have 50 players next time, I’m still doing five rounds of swiss. Get paired against a pro? Congrats! You now have an excuse as to why you didn’t place higher. 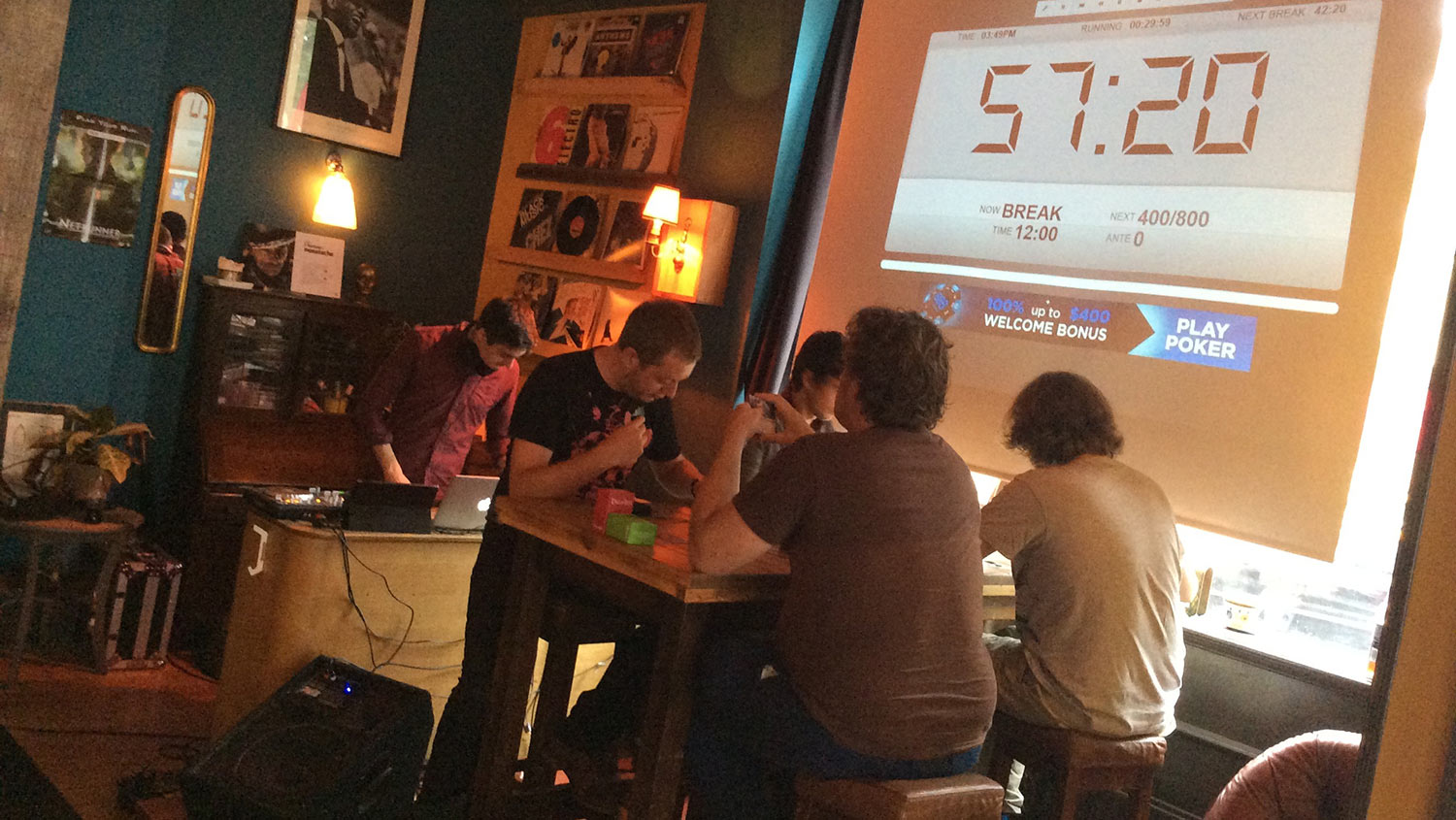 For this I’ll swap over to my friend and fellow-netrunner Tim Anderson, who kindly DJed for the whole day.

Tim: Okay, so since Netrunner depicts a thoroughly miserable future where simply going outside is enough to get you blown up, I’m pretty sure no one leaves the house except to evade the authorities or meet their stim dealer. Certainly, no one goes around forming bands or having a lovely sing-song. Music in the Android universe is written by nerds and performed by algorithms. No guitars, no lyrics, just full-tilt neon maximalism with enough propulsion to get you to seven agenda points before your heart stops.

With this in mind, I basically just brought a bunch of music with synths in it.

Here are some of the best songs!

Teeth of the Sea – Reaper

Emeralds – Does It Look Like I’m Here (Daphni Mix 1)

There’s a lot of kick in there, so if you have a headache or you think dancing is for dweebs, then you can grip some superb, mostly-ambient stuff over at Spectrum Spools. If you want some lesser-known scifi soundtracks then check out the alternate soundtrack to Silent Running by 65daysofstatic, or Black Rain who have literally written music for William Gibson. If you want some music which, right now, in 2014, is actually half-woman, half-algorithm then Holly Herndon is where it’s at. AND FINALLY, we all know about Vangelis’ superb soundtrack to Blade Runner, but did you know that before he did all that synth noodling, he was in a frankly ridiculous band who wrote songs about horses and had an astonishing collection of beards? This last fact has nothing to do with Netrunner, I’m so sorry. 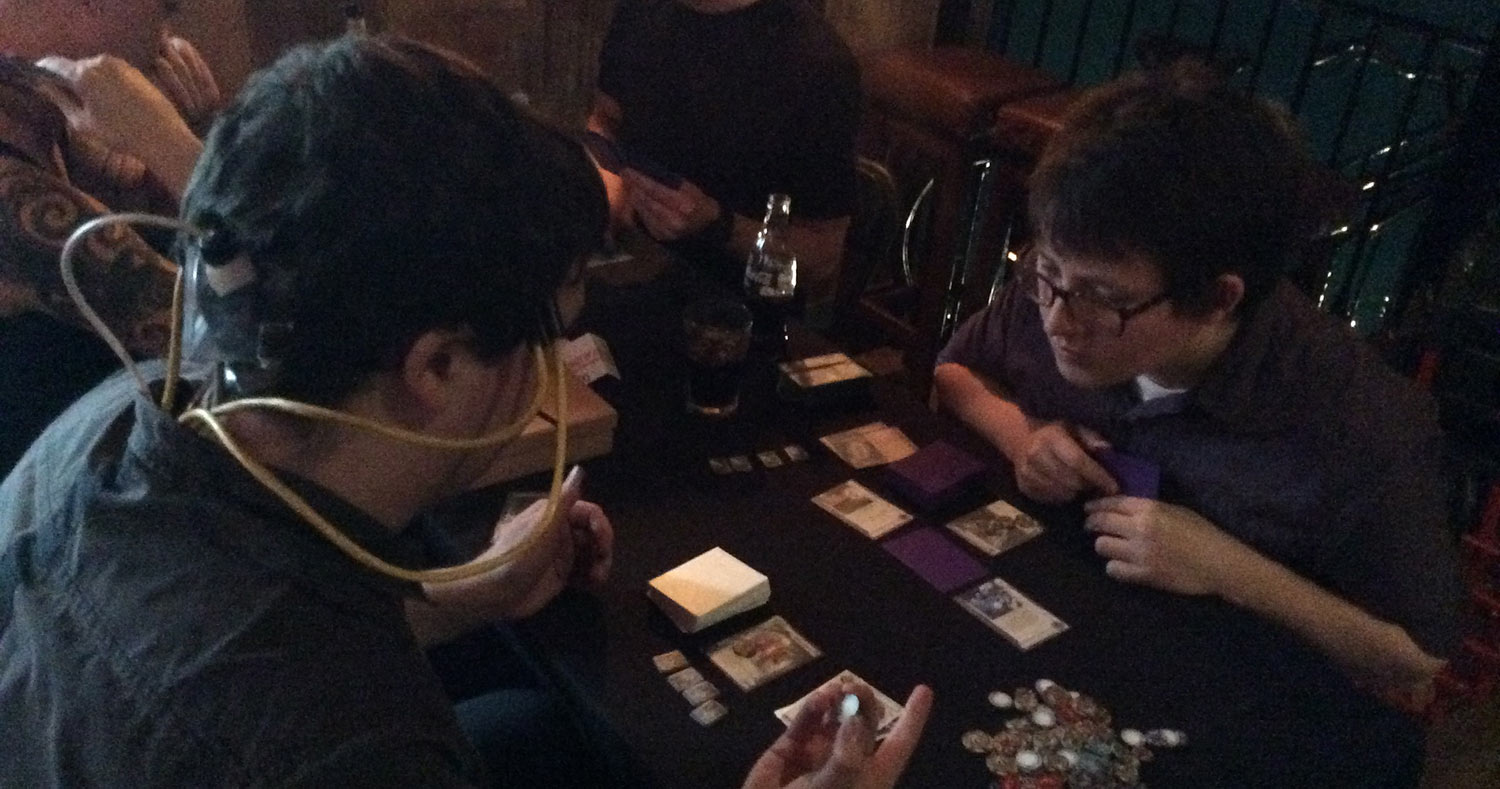 Quinns: I got my hands on some draft packs and a tournament kit full of prizes from my regional distributor. Until we got these, though, we were planning on just making dumb prizes with a lot of heart. A tiny stuffed giraffe for Best Jinteki Player, that kind of thing. Something players can take home, or perhaps pass to the next winner like a wrestling belt.

Our stroke of genius was to give the draft sets (the most expensive prize) to anyone who’d helped us to make the day special- for example, the girl who’d baked Dinosaurus cookies for everybody. Thanks again Jenny! We also gave the top four players a free cocktail as part of their prize. Too often in board gaming tournaments end with a kind of… veneer of frivolity and a lot of butthurt contenders. We wanted a celebration, and we got one. 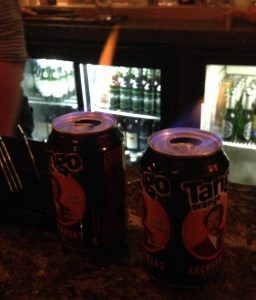 The free drinks in question were Diesels, named after the Netrunner card. Mixed in the can, then you pour overproof rum on top before setting it on fire. Diesel Gives You Flames!

What I’ll be changing next time

That’s all I’ve got. If you’d like to attend one of these, I’ll be sharing any news in SU&SD’s own news and on my own Twitter.

What are your experiences running events, everybody? 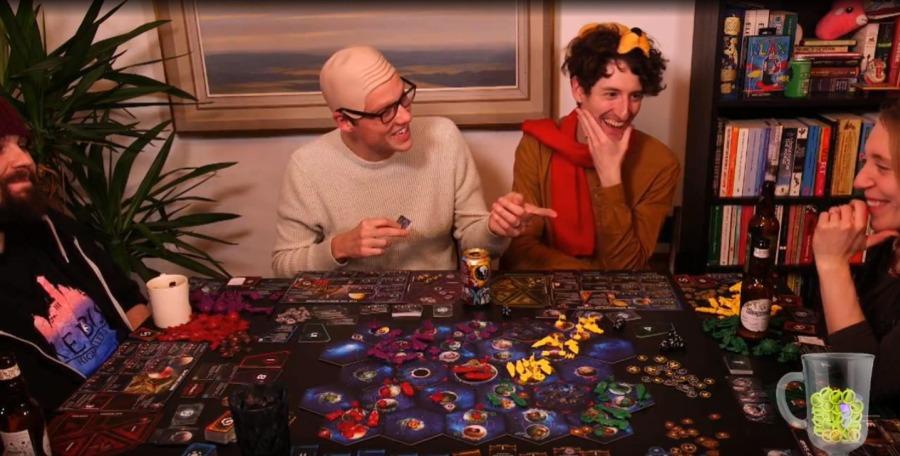 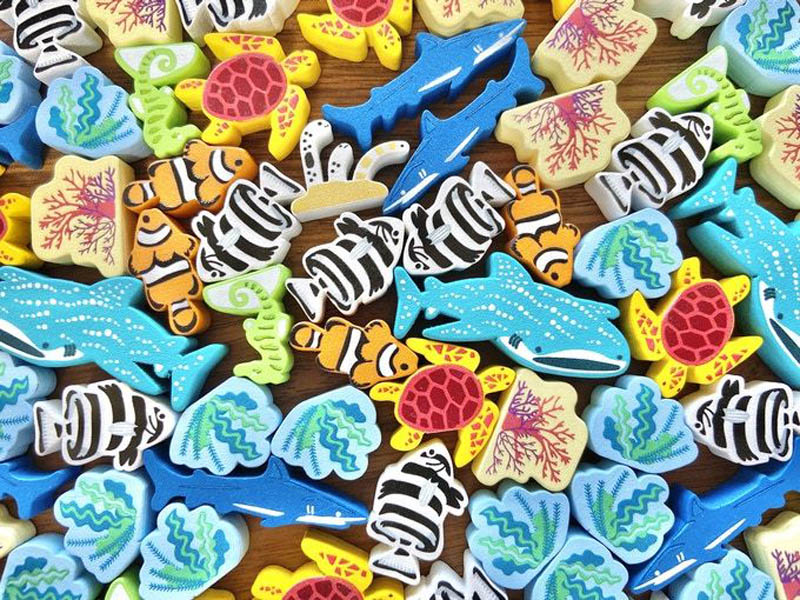