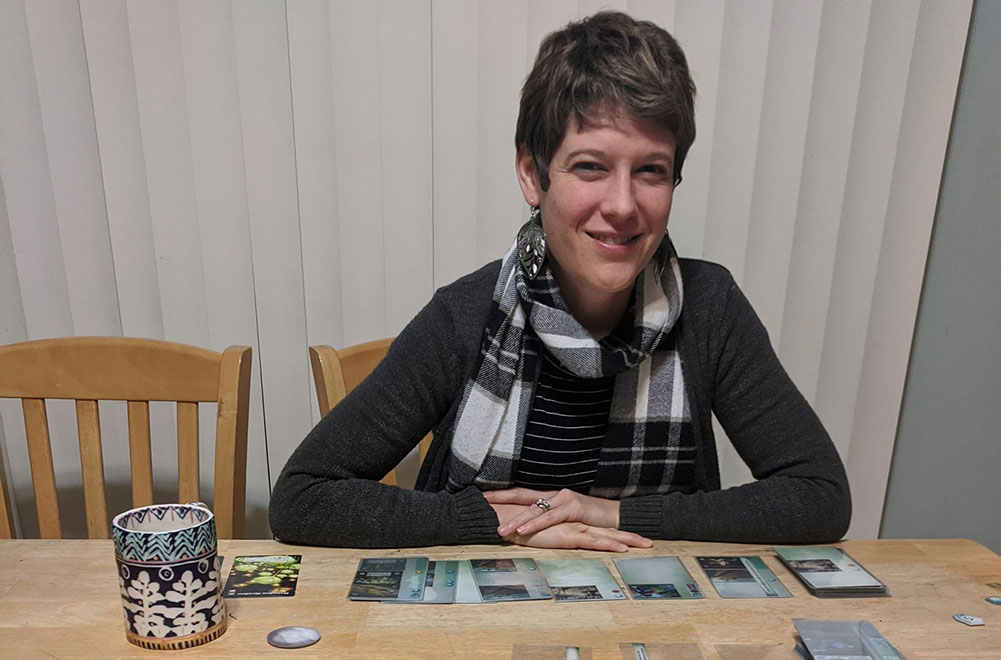 [Eric Tonjes is Shut Up & Sit Down’s miniatures gaming correspondent. This week, we’re publishing an article from Eric of a rather different nature. Content warning: This piece contains terminal disease and the loss of a loved one.]

Eric: As I write this, I’m looking at a copy of Pandemic Legacy: Season 0 sitting on my bookshelf. I am smiling. I am crying. It is a game I will always love, and I will never know how it ends.

Elizabeth and I got married almost a decade and a half ago. I was already firmly entrenched in my hobbies, painting miniatures and running a weekly D&D campaign. Initially it was “my thing,” and I never tried to make her love games. However, over our early years, she slowly eased into them. We played some Ticket to Ride, some Catan, and soon she was hooked. I remember the first time we finished playing Caverna, which became an enduring favorite. She told me she really liked it, probably in part because she won. I pointed out that she couldn’t say she wasn’t a board gamer anymore. She gave me her little half-smile and said she didn’t know what I was talking about.

Elizabeth was first diagnosed with cancer five years ago. We were just about to move across the country for a new job, and our third child was still an infant; we grieved an uncertain future for us and for our kids. We played Arboretum and Forbidden Desert as she recovered from a surgery to remove the tumors, cards and tiles splayed across that misshapen table that never quite fits over the hospital bed. The nurse asked what we were doing and stared blankly at me as I tried to explain the concept of a designer board game. Then she turned to my wife and said, “And you enjoy these?” She just gave another half-smile and took her next turn.

Like much of the gaming world, the original Pandemic Legacy was a revelation to us. Without treading too far into the realm of spoilers, we named one of our diseases “Zomboid Fever” when we started. I’ll let those who have played it guess what transpired. Suffice it to say that a few months in I jumped to my feet, yelled “What!?” and spilled a glass of water across the floor. I framed the components when we were done. Her fluid script decorates the cards.

Perhaps that is part of what enchants me about this hobby: the way relational and emotional memories become entangled with tangible objects around my house and on my table. I’m looking through our battered copy of Jaipur, our favorite two-player game. I remember playing it a few years back, after the initial diagnosis and before the word “terminal” entered the equation. We were sitting in a hotel lobby, traveling for our anniversary. I asked her if she still had those jewels she took at the beginning of the game. She looked at me suspiciously and asked if I was keeping track of everything in her hand. I said maybe. She asked what else she was holding. I told her. As a half-dozen people stared, she threw the cards at me and we laughed and went upstairs and celebrated a love that had become comfortable and sweeter ten years in.

So many of our friendships are interwoven with these objects. We’d invite people over for some wine and Splendor or Coup. We always loved the sides of our friends revealed within the magic circle of a game: a usually quiet and demure wife transforming into perhaps the most cutthroat economic gamer I have ever met, or an awkward group from our church yelling accusations and lying through their teeth fifteen minutes into the Resistance. My wife never gave into such base impulses, although she dearly loved to see me lose and would occasionally try to take me down a peg or two at the cost of victory for herself. I try to take photos of the group whenever I play a new game, and there are literally hundreds of faces in those pictures whom we love and whose lives have enlarged our own.

Elizabeth’s cancer came back with a vengeance a few years ago. We knew it was incurable. There were many nights, once the kids were down, tired from the uncertainty and grief, that she would ask to play a game. Sometimes I said no. I wish I hadn’t. Even though we were too emotionally spent to stare into each other’s eyes and talk about deep things, the evenings we did break something out were a chance to be together, to know and be known. Part of a relationship is built face-to-face, through conversations and revelations, but much is built side-by-side as you do things together, sharing experiences in the company of another. Board games were for us both a chance to learn about each other and a voyage of discovering a story, an artifact, a world.

When I heard that Pandemic Legacy Season 0 was due out in late October, I emailed Z-Man Games and asked if we could have an advance copy. It didn’t seem like we had much time left. They generously gave us one and we dove in, playing several times a week, sensing that the clock was ticking. We were right. We have two game months left, but Elizabeth won’t be playing anymore. She is asleep in a bed beside me, in that twilight season where we seek to keep her comfortable until she slips beneath the waters and I can’t see her anymore.

I have no intention of finishing the game with someone else. It seems right to have it cut off, always a mixture of the happy and the sad, always unresolved. Death is like that. We’ve known for years it was coming. We’ve heard its footsteps nearing in the hall. Yet it still came as a surprise when the door opened and it drew near. There are so many conversations left to be had, so many memories left unconfirmed, so many jokes that will never have a punchline. The sealed boxes and unopened envelopes are a reified manifestation of life’s always-premature last page.

I don’t know what I will do, as a parent or a human being, on the far side of this thing. After thirteen years of marriage, I’m not even sure I know who I will be alone. Yet I am so glad we played this game together, even without the ending we had planned.

Elizabeth’s favorite games were the ones where you built something along the way. Win or lose, she would say, at least she could look back at what she had made and feel like she had made something meaningful. Life is a game like that, and despite the sense that we are in some cosmic sense losing, there is so much meaning in what we have made.