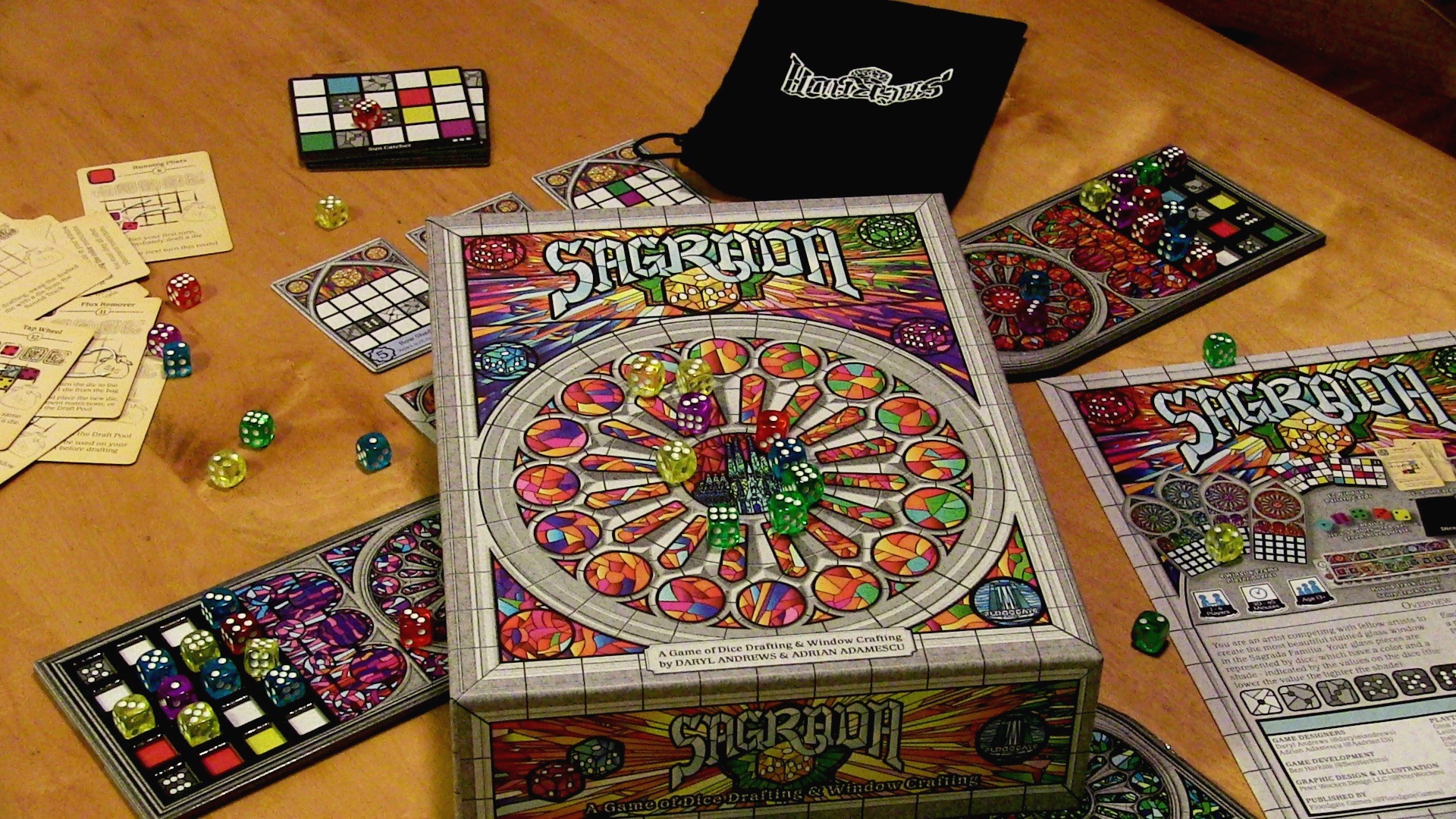 Paul: Help me out here. I’m in a bit of a dilemma.

I keep telling people that I’m not especially enamoured with Sagrada, that it’s just my latest diversion, but then I say they should still try a game with me. Then it hits the table again. Then I’m playing it once more. Then we have a good time and I think about the next person I want to try it with. Then it goes back into my bag and I bring it to someone new.

Am I in denial about just how much I like this? 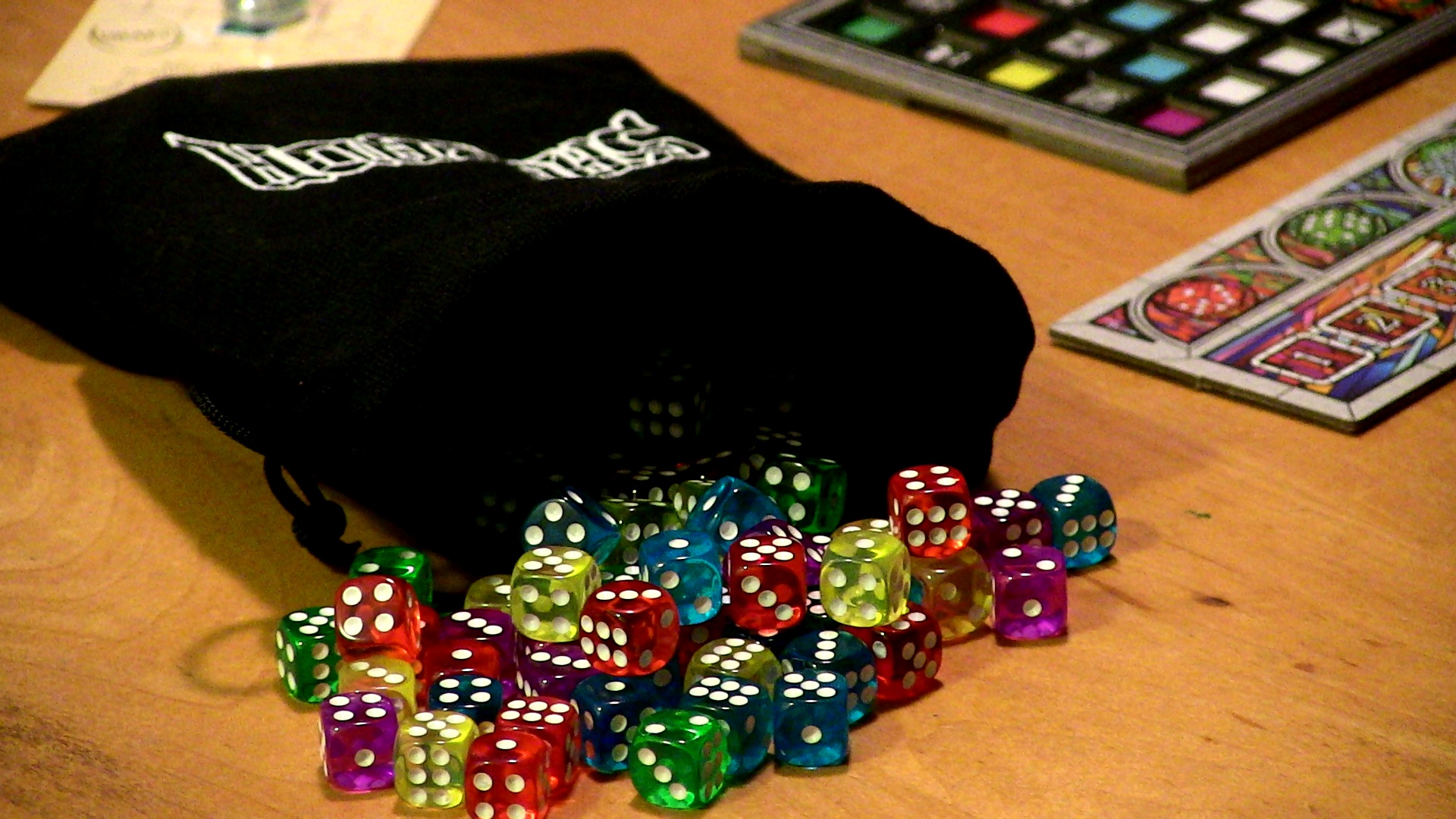 There’s something gloriously decadent about a huge bag of dice. When I was young, I had a handful of board games and I was lucky if the dice they came with were still in the box. Having even a single die, one little agent of randomness, felt a little bit exciting. Some feelings never quite go away and, even after playing hundreds of board games, Sagrada’s ninety holy, gittering cubes still seem like a mountain of candy to a boy who has barely tasted sugar.

So you understand how I felt when I opened this box and found everything was all about those dice, about rolling and choosing and arranging and ordering them. Sagrada is ostensibly a game of methodically making stained glass windows according to particular patterns, but really it’s just has you lining up dice according to three criteria, a task initially as easy as counting your own nose, but eventually as furiously impossible as sorting confetti in a hurricane. Each player begins by selecting a window pattern, then slotting that pattern into the cardboard window frame that is their miniature player board. These patterns all have suitably sacerdotal names like “Lux Mundi”* or “Firmitas”** or “Gravitas”*** and they lay out the famous First Rule of Dice Club. The First Rule of Dice Club is that you gotta place dice, which represent your coloured panes of glass, according to these patterns. A five upon a space calling for a five. A yellow upon a space praying for a yellow. No compromises. The cards are gospel.

Each card has a difficulty rating. The harder the card, the more favour tokens it blesses you with. These are indulgences that, even if they don’t save your soul, may still save your work. At the start of the game, three randomly selected tool cards are available to everyone and each of these allows you to modify your window (well, your dice) in some way. Using these involves paying favour tokens, so the tougher your project, the more opportunity you’re given to modify it. 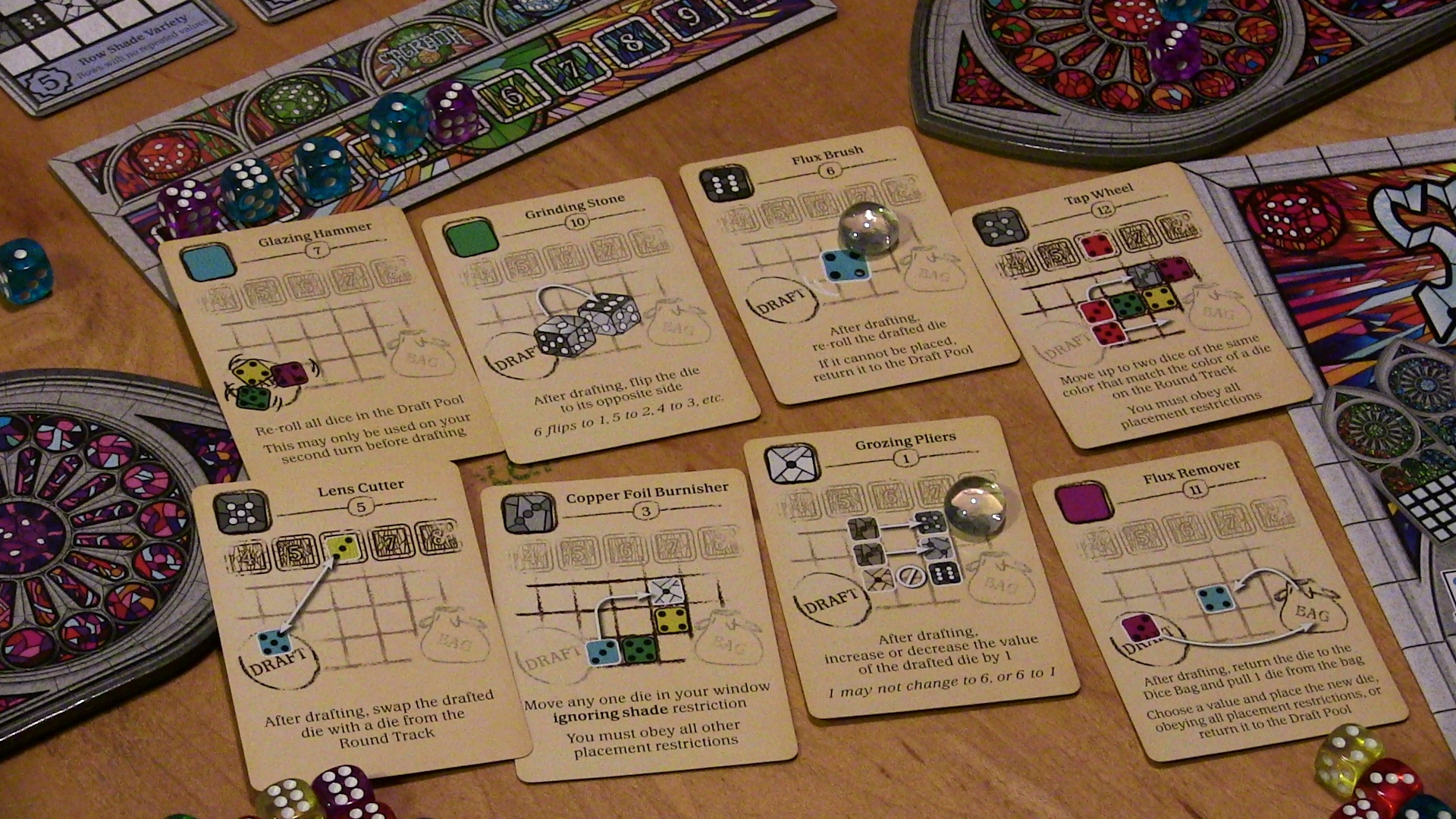 Back to those tools later, first we have to get dice drafting. Each of the game’s ten turns has you searching for your salvation in a giant black bag, pulling out handfuls of dice relative to the number of players and then rolling them all. Everyone takes turns choosing one die at a time from this pool and, beginning at one corner of their window, starts to build out their pattern.

This is a good time to learn about the Second Rule of Dice Club. The Second Rule of Dice Club is that dice of the same colour may never, ever be placed next to one another. It is a sin. Diagonally adjacent is acceptable, but edges can never touch. That’s okay, though, because it only means you’re going to be assembling an even more divinely diverse rainbow of colour, right? Well, maybe. It mostly means that everything ends up looking incredibly disordered, something between a Skittle spillage and a unicorn autopsy. 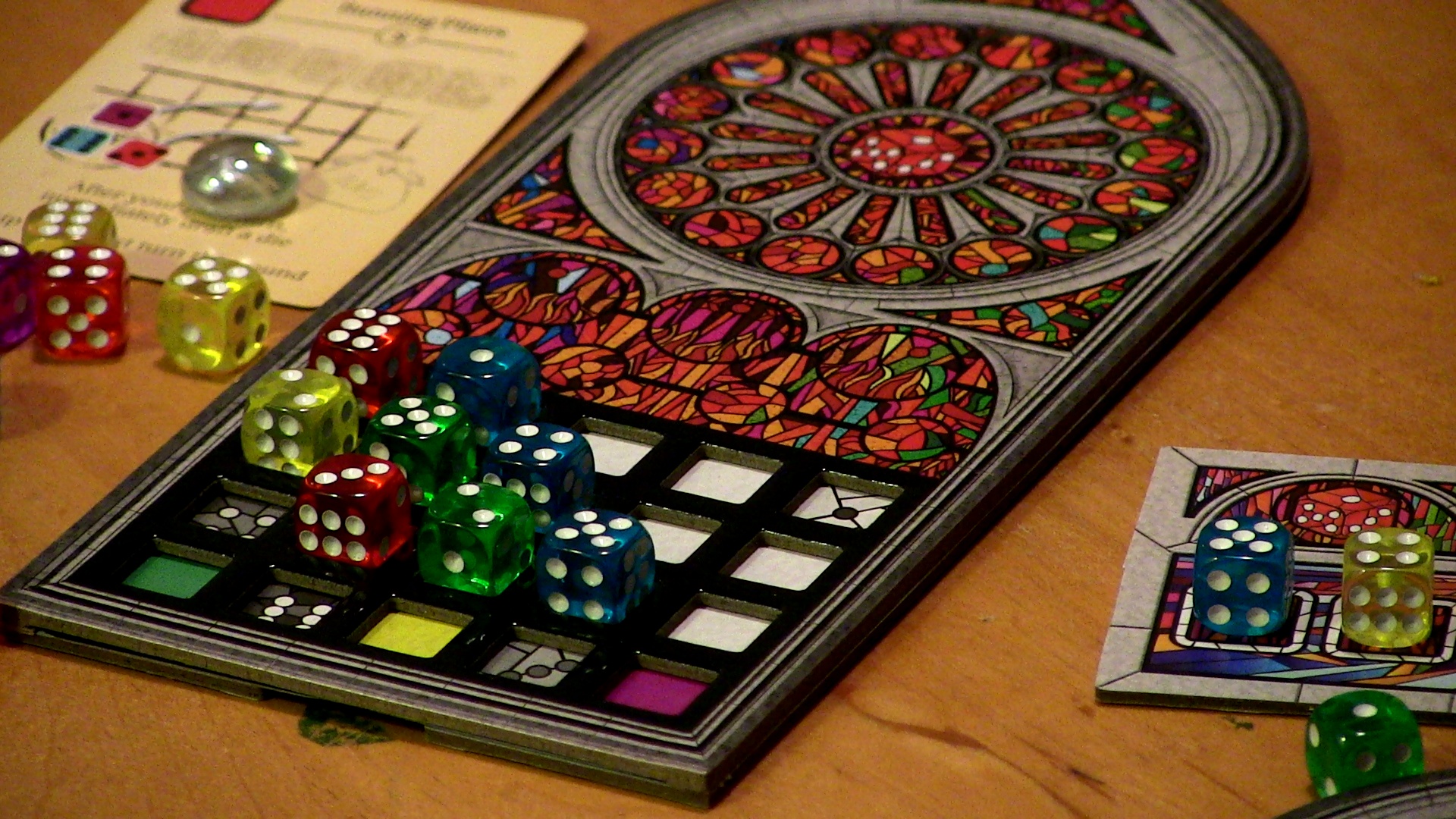 So you’re drawing dice and rolling dice and swiping dice, all through a rotating player order that means you’ll get first choice at least some of the time. But when you don’t? Well, it’s not so bad, because there are so many dice and so many spaces that you can usually put something somewhere. (I believe it was St. Luke who said “Meh. A red is as good as a purple.”) You’re not going to make a particularly pretty picture, but you’ll at least avoid the cosmic horror, the eternal damnation that is two yellows touching. 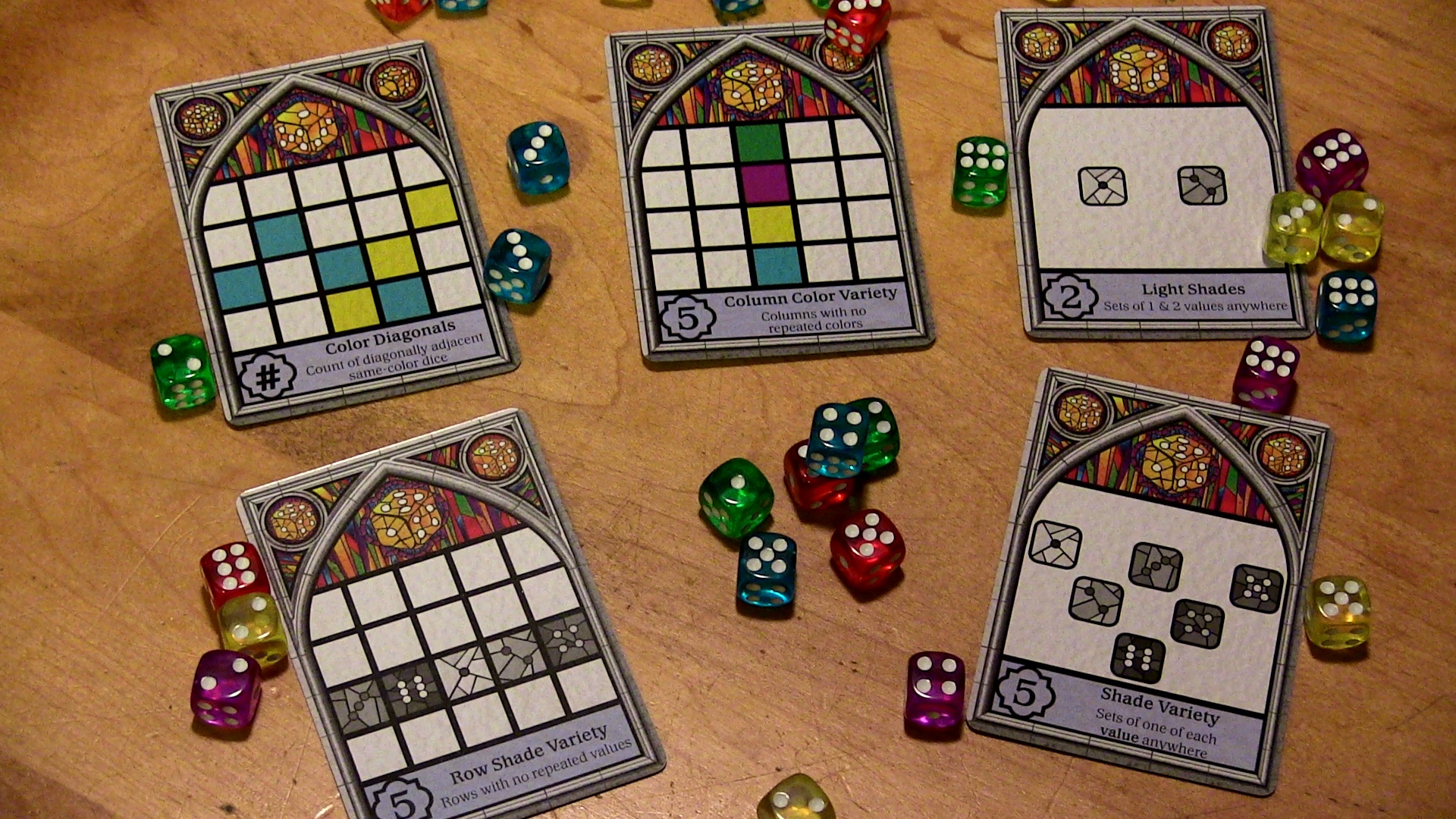 Or is it? You’re also keeping an eye on the victory criteria. Each time you play Sagrada, deliverance comes from three different public cards that task you to, say, make a column of dice that are all different colours, or use as many threes and fours as possible. You have a private victory condition too, awarding you points according to how much you use a certain colour. Dropping dice is all well and good, but satisfying these terms? That’s much trickier.

I’m ahead of myself. I haven’t told you about The Third Rule of Dice Club. The Third Rule of Dice Club is that dice showing the same value also cannot be placed next to one another. Dice value represents shade (colour, not attitude) and while two different shades may meet in the next life, they sure won’t here. As I’m sure you can guess, finding a die of a different colour and value to place next to one or two others is fine, but when you have a an almost complete window, shining with shade and colour, the holes you need to fill are MADDENINGLY SPECIFIC and the dice you roll PURITANICALLY UNCOMPROMISING. 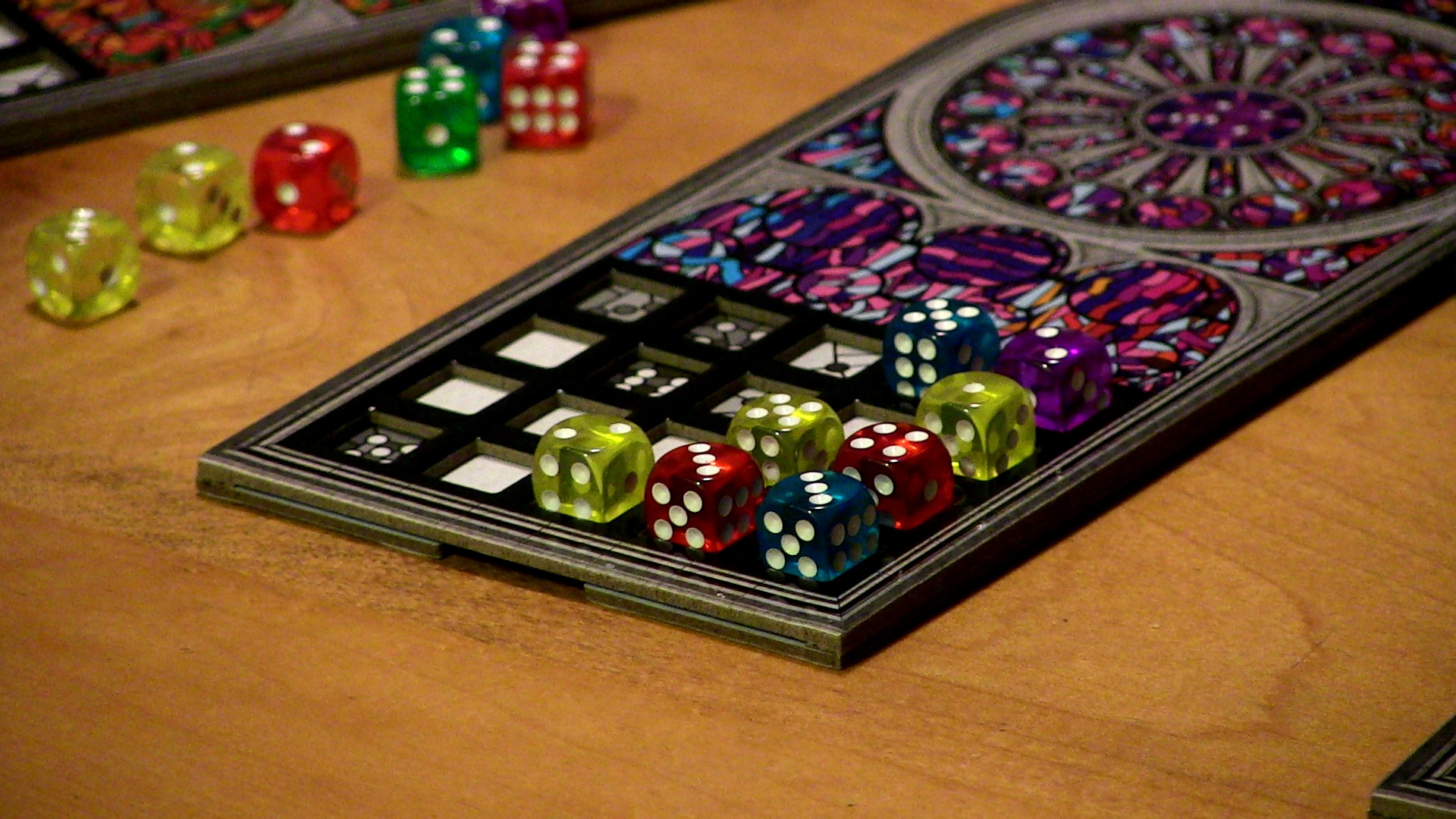 Somehow, this is brilliant.

You can see it coming. Sometimes you walk right into it, not even realising you dropped a red die right next to a space where your pattern also demands a red, but other times you know that, very soon, you’ll need a specific colour and number to follow another specific colour and number. Sagrada would be much easier if you could drop dice anywhere, but remember, scripture states that you always work out from that single corner, space by space, narrowing your scope. 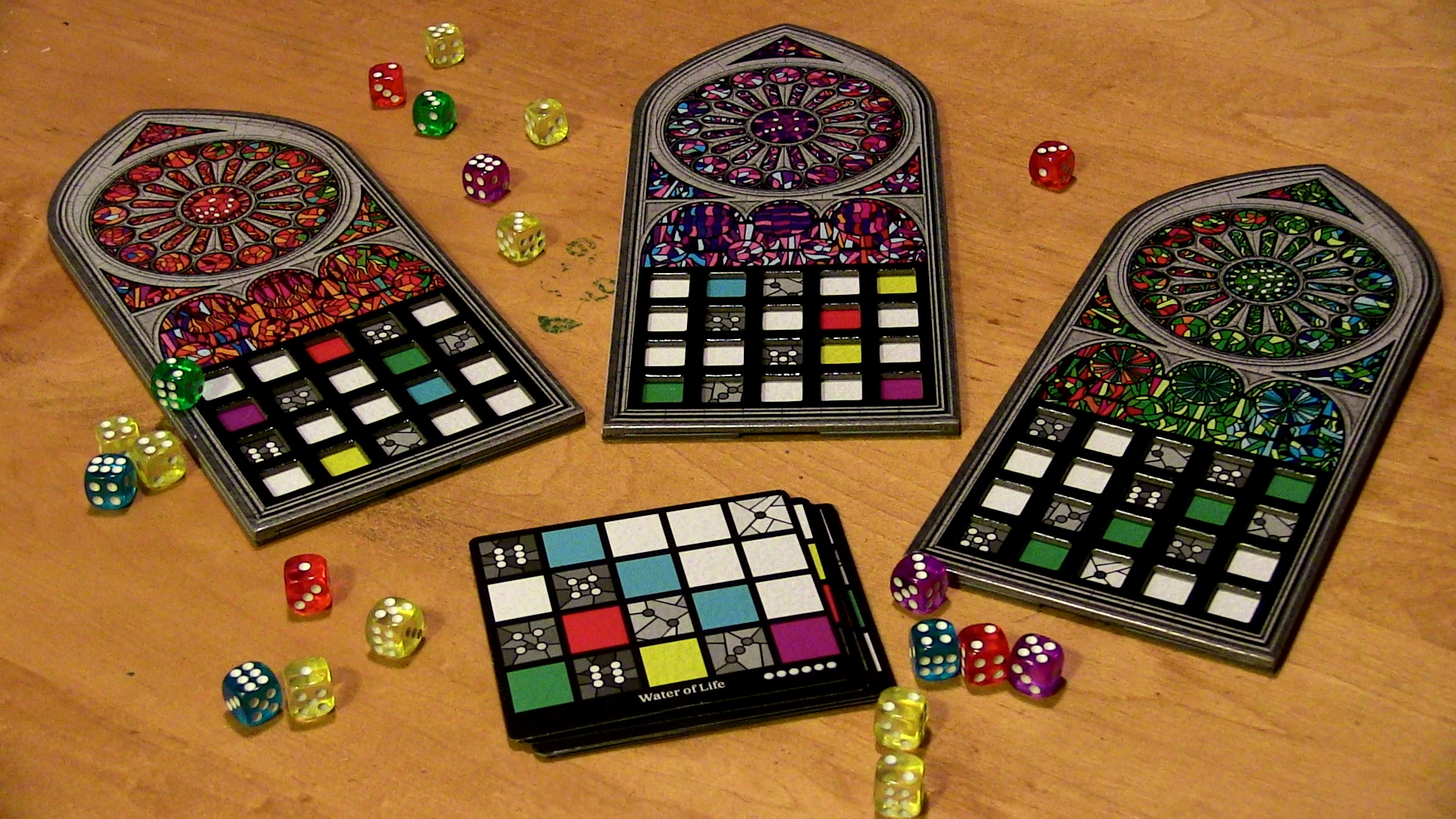 This gives the game a natural arc from the dinky to the diabolical, your first turns all boasts about how simple it is, your last full of curses to the heavens. It’s there that you really burn your favour tokens as you try to hammer and chisel your way out of whatever mess you’ve latticed your way into, but it’s a bad time when you discover that the first person using a tool only pays one token. Everyone after must spend two. Those tokens won’t last long and you won’t be using tools often, something of a shame as they’re the subtle seasoning that can add so much flavour.

I’ve said almost nothing about how you interact with your fellow players. While Sagrada is an ever-evolving puzzle that gets harder and harder, it always remains your puzzle, a private puzzle too sacred for others to touch. Though you can never covet thy neighbour’s dice, you can at least is deny them first, which is where this becomes a particularly good game for just two. 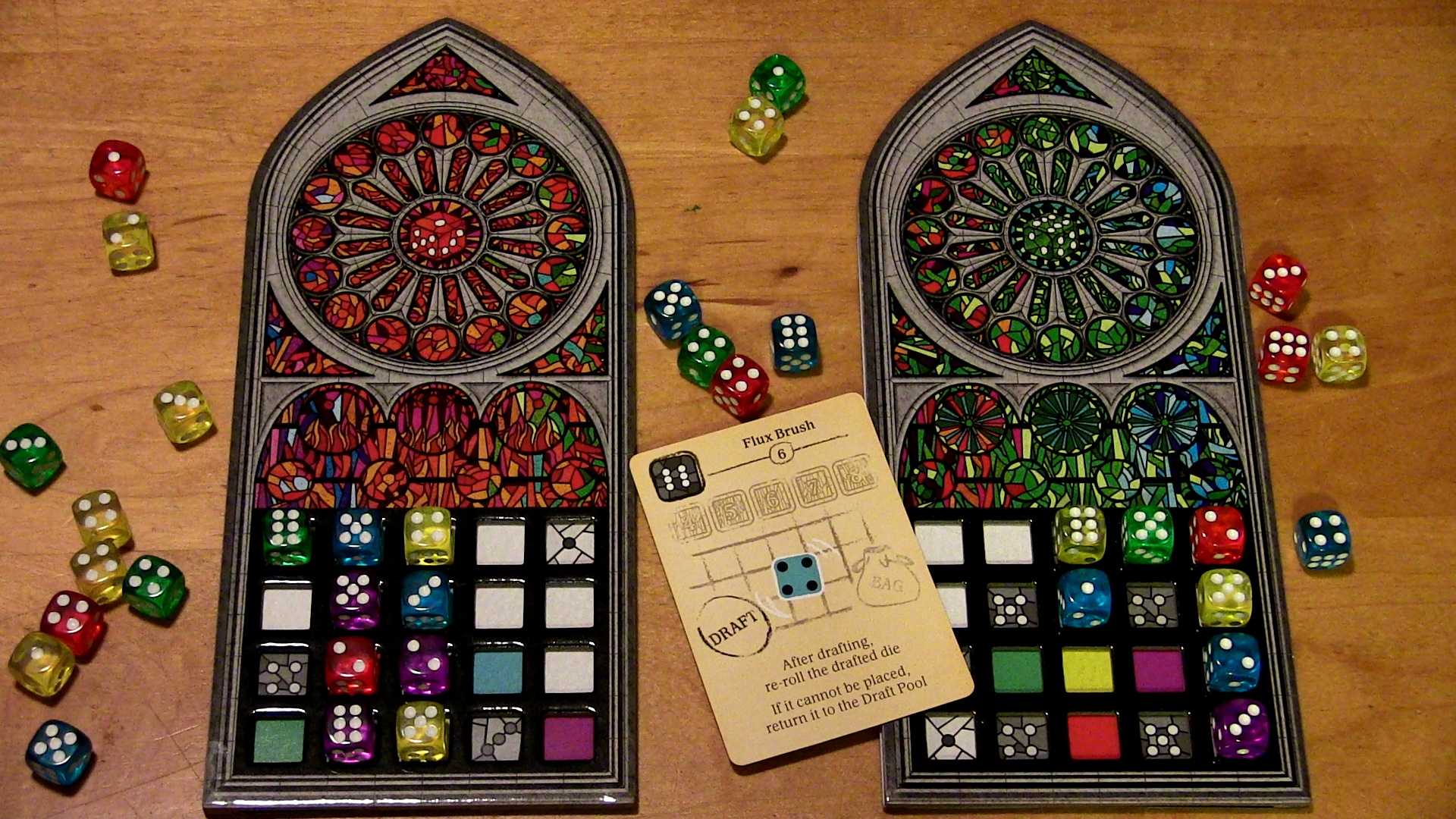 In a larger game, you’re almost always more rewarded by, and more invested in, making good choices for yourself than you are trying to crack everyone else’s glasswork, but in a face-off, there’s a finer balance between simply taking what benefits you and trying to steal away dice that you know could really help your opponent. Especially with the smaller dice pool and especially mid-game, where it’s increasingly tempting to compromise on what you most want just to make a devilish, debilitating denial.

For some of you, this may also be where the insults start. Where you rage because someone took a green five when they would’ve been fine with any other five. And all you needed was any green. Any green at all. You weren’t even going to be fussy about it. That rising frustration you begin to feel? Yeah, you can spread that. Go on. Do it. 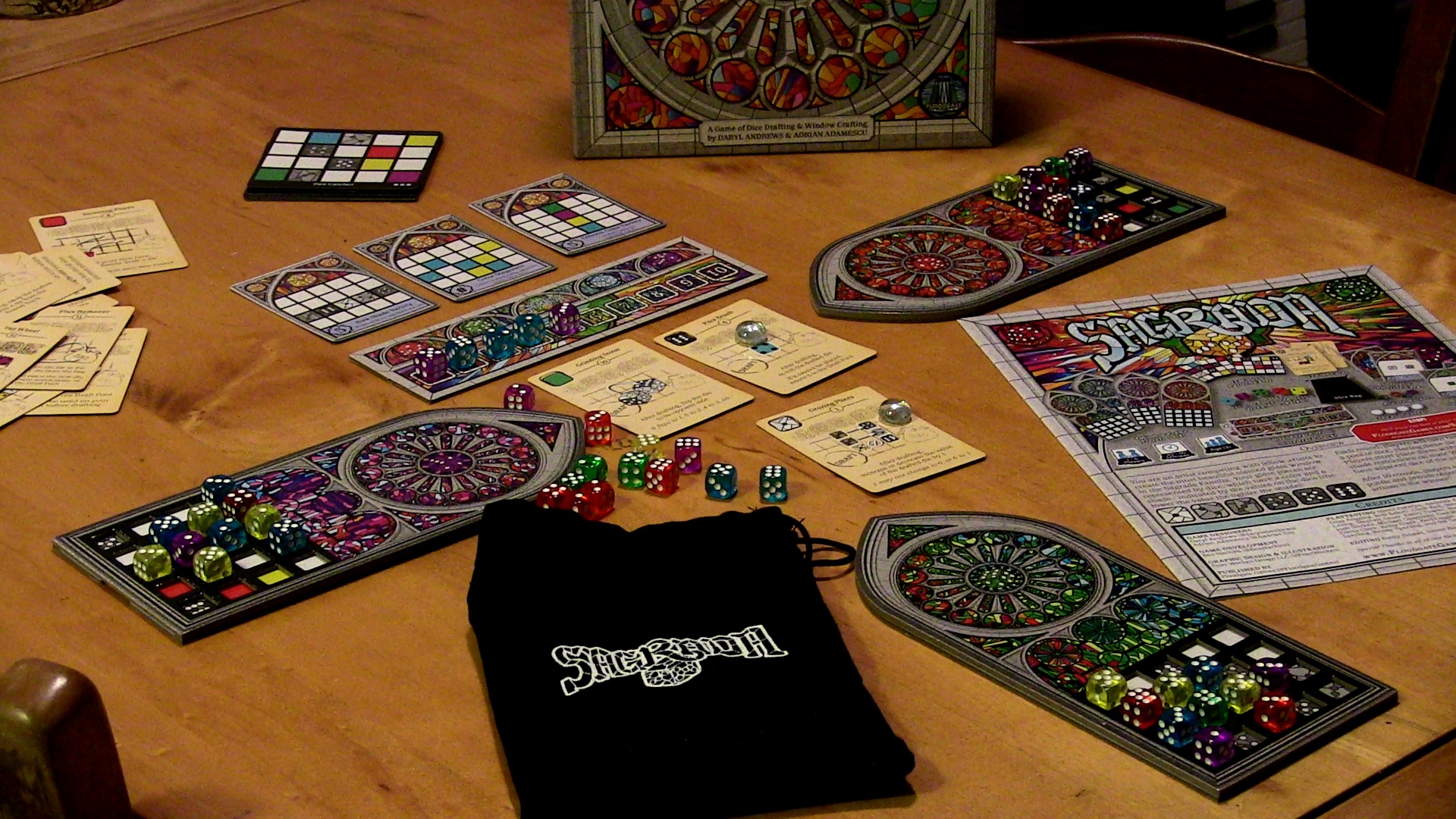 Perfectly completing your window is possible, though hardly essential. The odd hole is more than compensated for by whatever scoring criteria you’ve fulfilled and, after a couple of games, you realise that Sagrada isn’t just about the luck of the dice and a few canny arrangements. It really does reward planning, foresight and, in a two-player situation, knowing when to be a jerk.

That said, each game is going to feel similar to the last, and while there’s a selection of different patterns and victory conditions, these don’t change either the tactics or the arc of the game. The tools are the best way to mix things up and having only three of these available each time actually ends up feeling like a limitation. I constantly wanted to be using more of these, more often, to be both creative and disruptive. 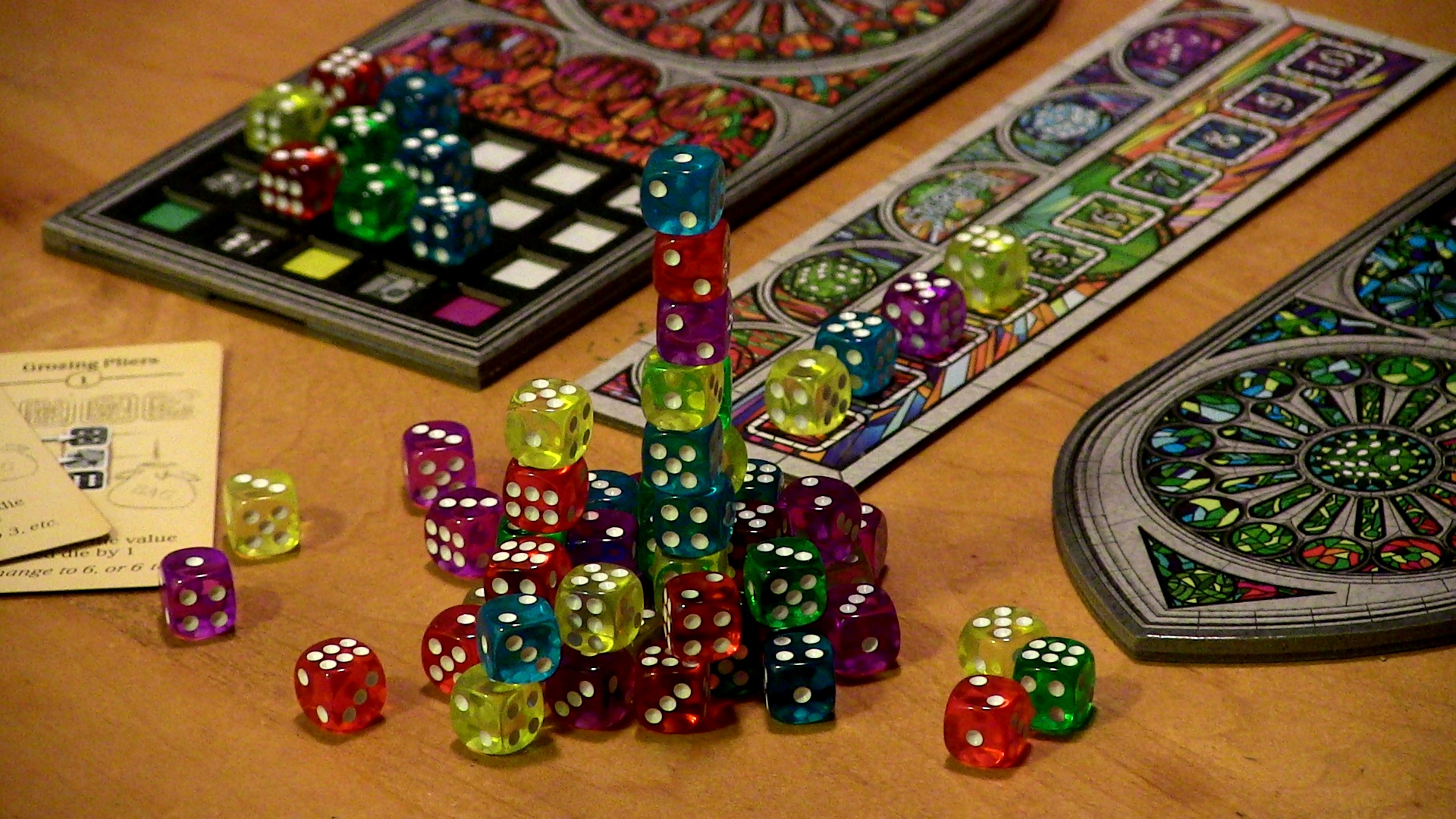 Is it odd, too, for me to say that I would have liked Sagrada more if I’d ended up creating patterns that were prettier, more distinct and perhaps somehow scored on their aesthetics? I know, I might be asking too much, but to work so hard arranging my dice and end up with something that looks more like a Pollock than a Pozzo? I’d like the payoff to be more than pure points.

And that’s the trick. I keep wanting just a little more from Sagrada, which is why I’m not leaping forward to recommend it, not petitioning for its sainthood. It’s going to be far too simple for some players, but that won’t stop it being a wonderful little puzzle to others, myself included. While it doesn’t offer as much variety to it as I’d like, it remains ever-vexing and I’ve had a ton of fun playing it, watching people twist in torment as the game gets tougher and tougher. I know I’m going to put it to one side soon but… no. Not just yet. 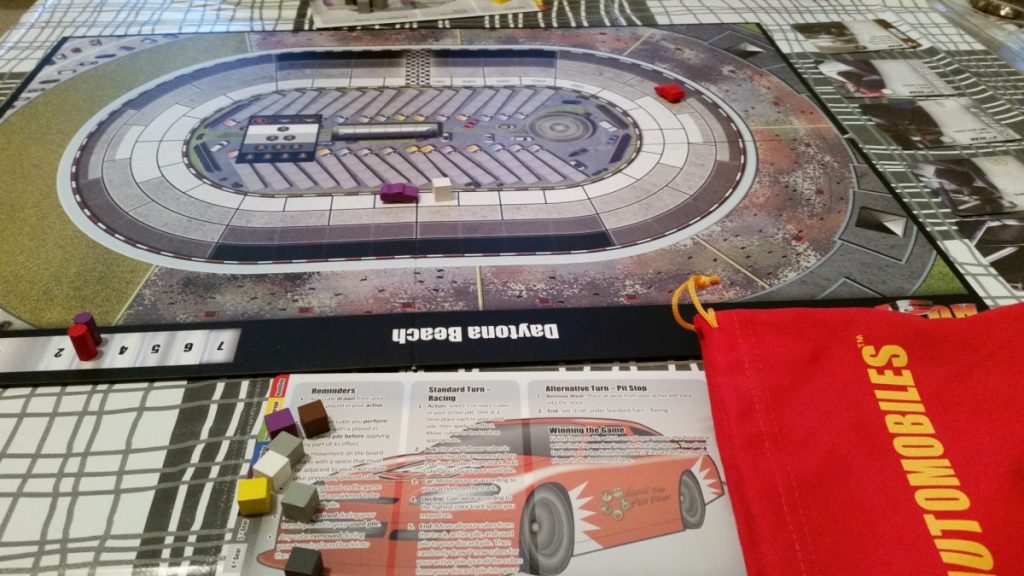 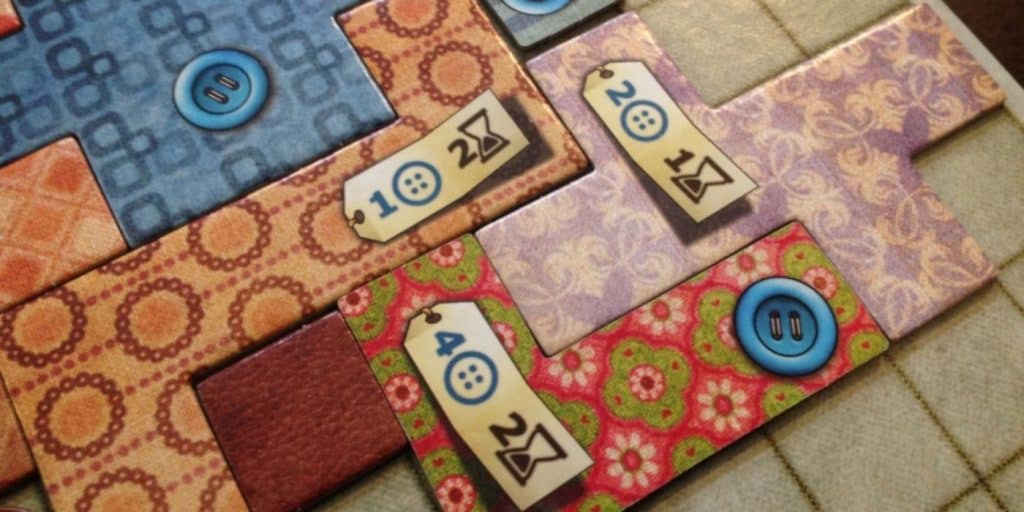