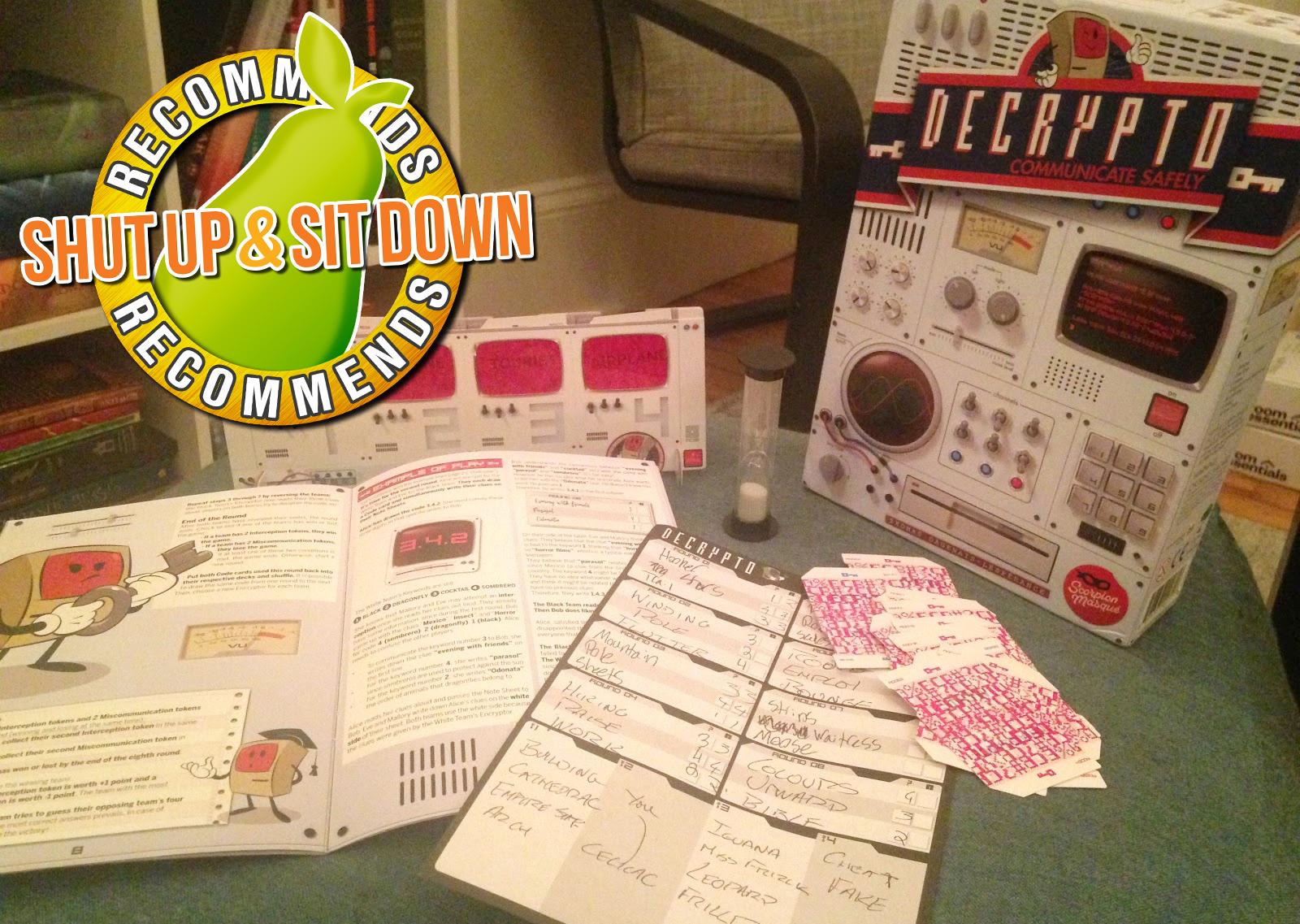 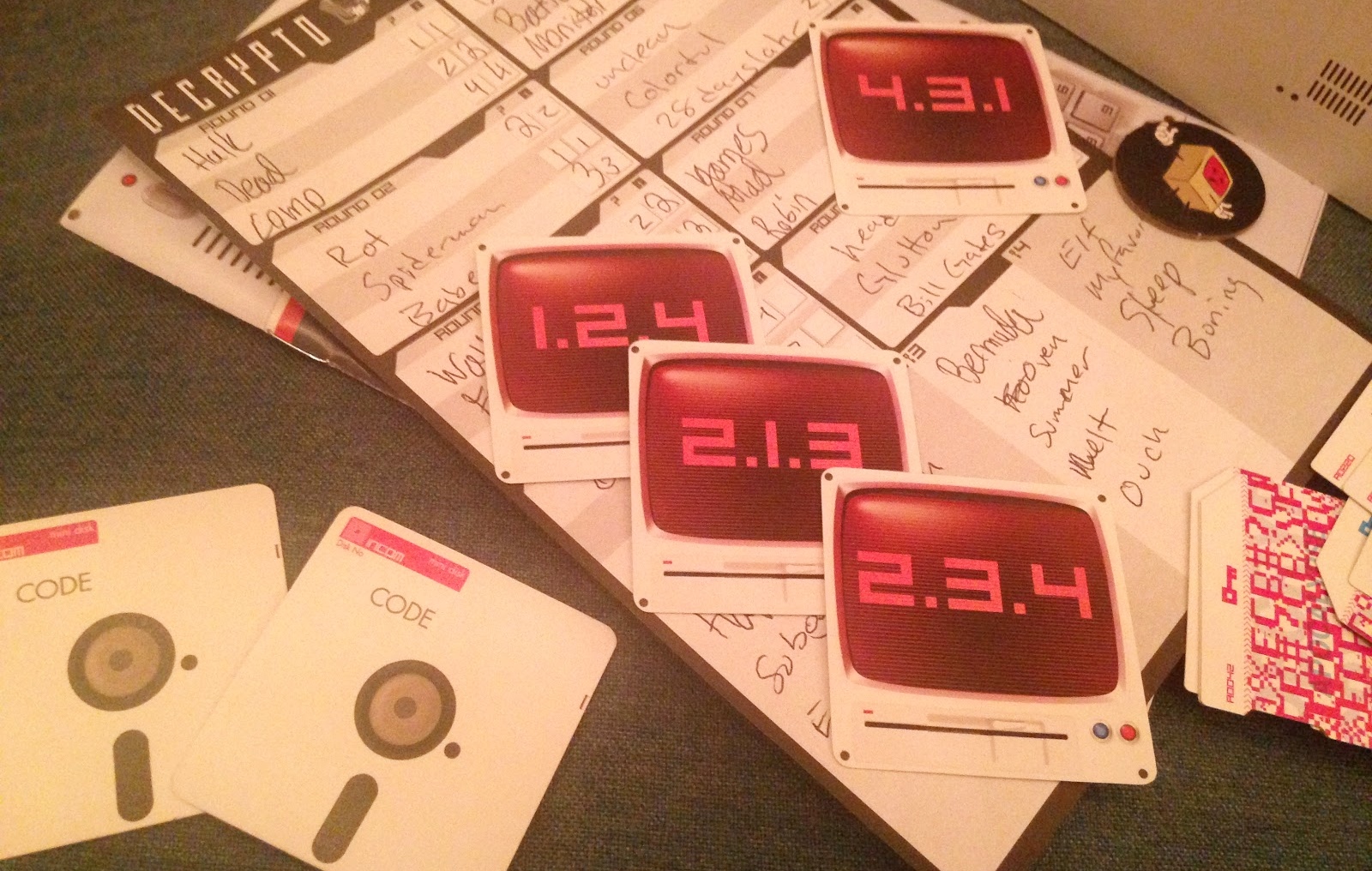 BUT FIRST: The caveat. Decrypto sounds so knee-curlingly boring that when I try to explain it I doubt my own ability to advocate for board games. Please, please, bear with me as I again try to explain it to *you*, my favourite of all our readers, after already practicing on myself, three friends and a cat. When I broke out pens and paper, the friends thought I was giving them homework. The cat fell asleep.

You and your fellow decryptors split into two teams, meaning you’ll need at least four souls to play. Both teams put up a cardboard screen into which they slot four secret words, words the opposing team will never see. Someone on each team draws a card that contains a secret three digit code referencing three of those words, a code which they will get their teammates to guess by writing down other words associated with them. Simple, right? 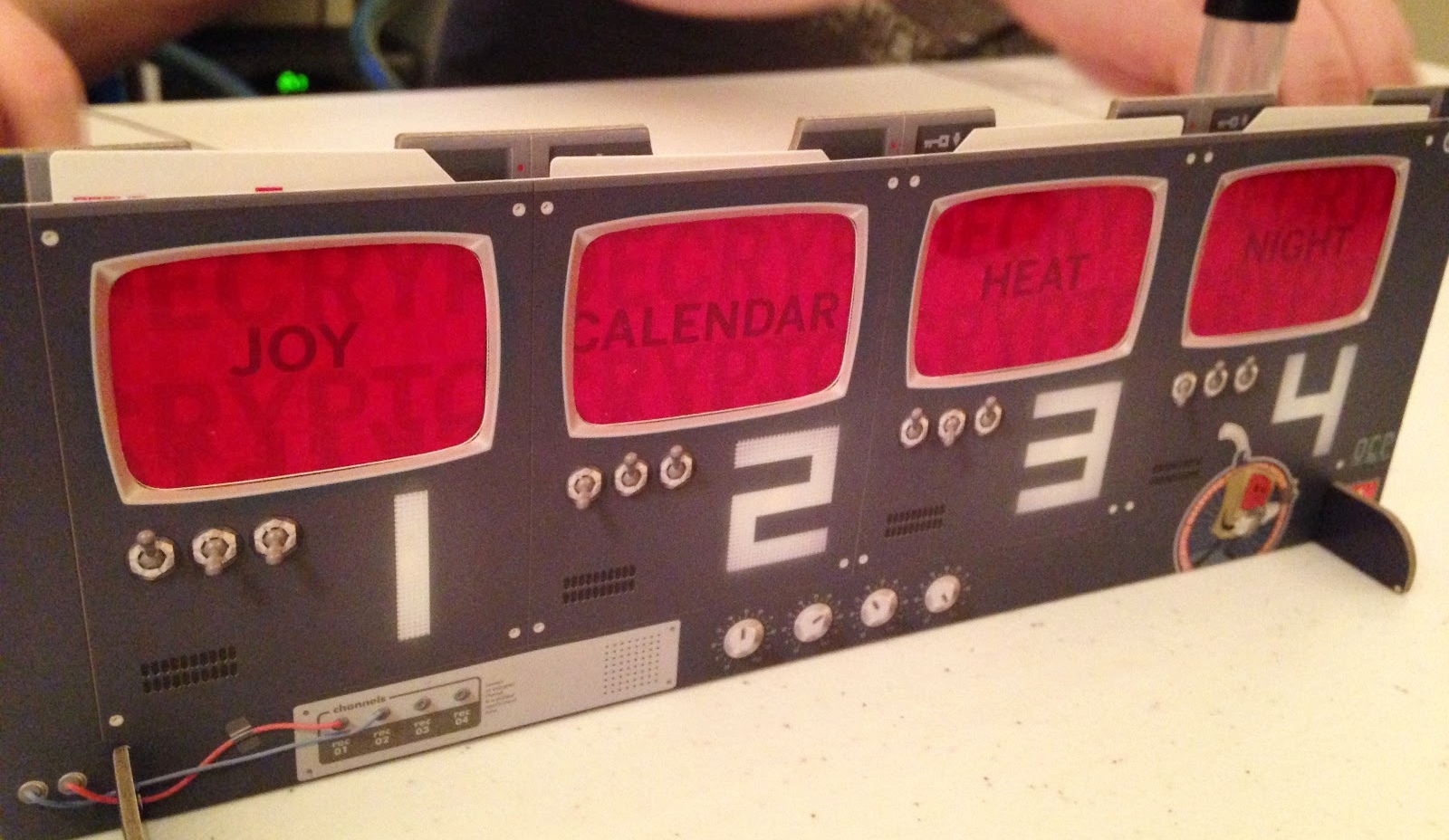 For example, if they’re staring at words like “Summer” and “Path” and “Egg” and “Psychiatrist,” and they draw a code like 4-3-1, they might write clues like “Couch” and “Bird” and “Sunny.” Their teammates would surely guess that they’re referring first to the fourth word, then the third, then the first and, lo – 4, 3, 1? – they have successfully passed the first round! What could be easier? Do they get a point, you ask? No. They do lose points if the guesses fail. BUT HOW COULD THAT POSSIBLY HAPPEN?

Hold that thought (here, I got you a basket to put it in). The other team also play the same simple guessing game and everyone moves on to the next round, all smiles and success. Everybody loves being right! Right? Then someone draws a new three digit code and writes down three more related clue words. Maybe it’s 1-2-4, with “Warm” and “Winding” and, um, “Brain”? That’s good enough! Nobody associates brains with summer. Or eggs. They guess the code correctly. Everyone grins.

Here’s the catch, the kind of subtle snag that bores into you like a splinter: Both teams are listening to each other. While they never see the other side’s four holy and secret words, they hear the clues that are given and the codes guessed. They know 1-2-4 matches up with “Warm” and “Winding” and “Brain.” They know that first word is related to both “Warm” and “Sunny.” Maybe they’ve guessed it’s “Summer” or maybe not, but they never even need to guess the exact words, they just have to build up enough information to guess the other team’s codes based on the clues they hear. And each turn they’re hearing more and more, collecting clue after clue, so the next time they hear a clue they think is related to “Warm” or “Sunny,” they can guess that it refers to the number 1. 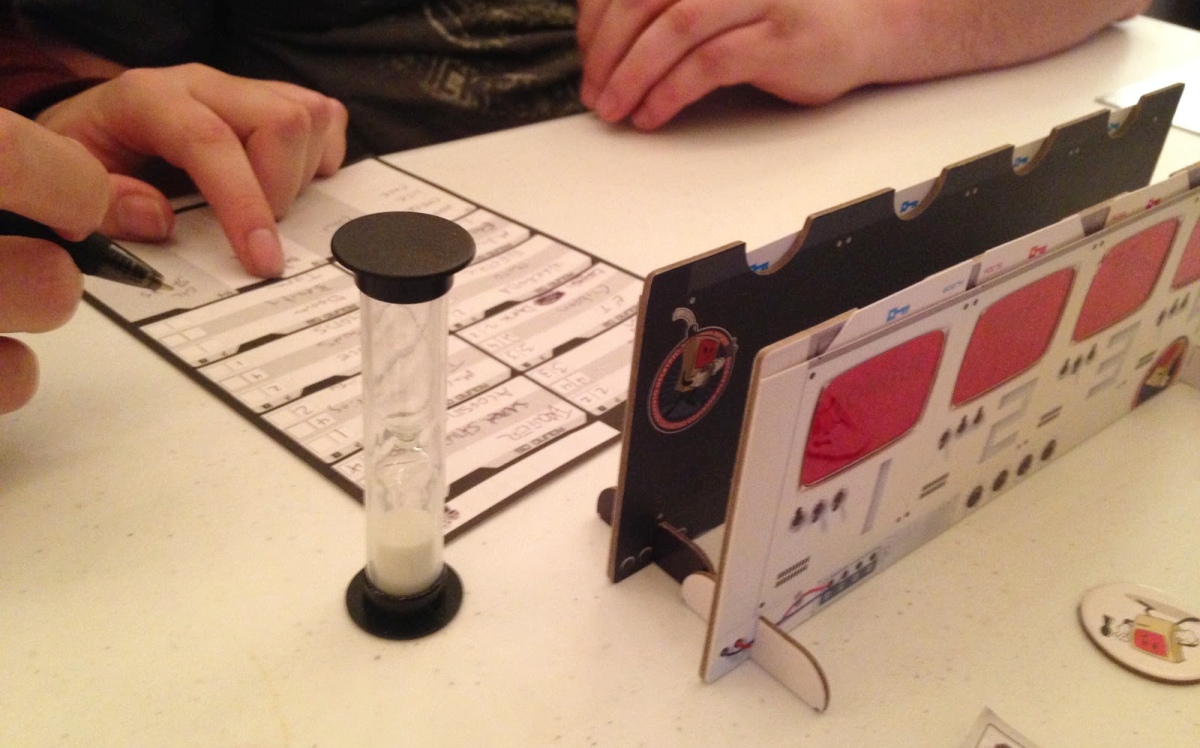 Pretty soon both teams have a collection of clues related to each other’s guesses. You realise that all the other team’s music-related clues relate to their fourth word, while it’s obvious now they deduced “Bird” and “Fry” and “Ovoid” and “Hatch” all lead to the same number and… is that sweat on your brow? You’re safe-cracking with a thesaurus and it’s only a matter of time until one team guesses the other’s latest code, dismantling their clues like some diligent etymilogical detective. Each rival code guessed is a point and by amassing just two points, your team wins the game.

Now you get it. Now you understand how Decrypto is so much smarter, so much sneakier than it first appears. You start offering the dumbest clues you can just to buy time, just to throw your rivals off. What’s a good clue for “Summer” going to be? “Lovin’” maybe? Sure! WAIT WHY DO MY TEAM THINK LOVIN’ IS ASSOCIATED WITH EGGS. I don’t care that Al Pacino was in Heat, says your friend. They’ve never seen Heat. HOW COULD YOU NOT GET TO CUMBERBATCH FROM EGGS LAST TURN. Suddenly, it’s all gone wrong.

These failed code guesses are what dock you points and make your opponents even MORE likely to win, meaning you have to expertly walk the line between vague and incomprehensible, as if trying to pass some sort of lexical sobriety test. And now, now, you’re truly playing Decrypto. Regardless of whoever wins the first game, you say it doesn’t count. The next match has you immediately savvier, slyer, weaving around words like a snake around rocks, trying your best to veer in the weirdest direction you can when you think your enemies are on your tail. 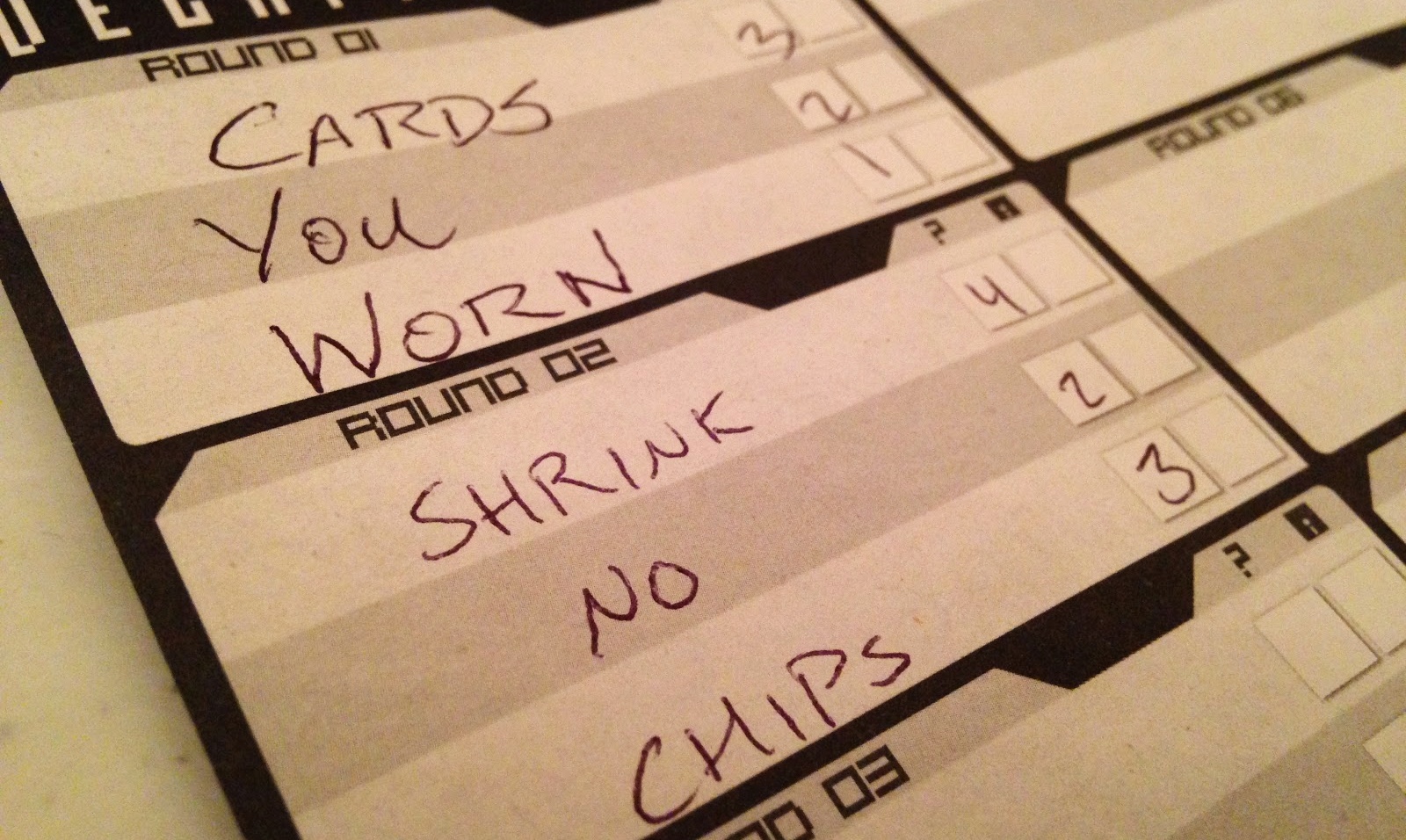 Do you see? Did I sell it well enough? Because I am recommending Decrypto as hard as I recommend our beloved Codenames, particularly if that’s also a game you adore. It lends itself toward the same magnificent miscommunications, the same head-slapping hilarity, though in an entirely different way.

Words are jigsaw pieces that we all assemble according to our own personal protocols and as soon as games ask us to guess one another’s interpretations, to drill down on exactly how the little librarians in each of our brains is arranging their shelves, we quickly become baffled, amazed, astounded and alarmed. Why can’t you think the way I do!?

But I’m sure you can also see that Decrypto is one of the most monochrome things we’ve been excited about since… since Escape from the Aliens in Outer Space. It’s grey and grim, looking like a marriage between an eye test and a tax form, only coming alive in the choices and the chaos that it creates, a paper Frankenstein animated by this human electricity. It’s also a party game that you barely even need the components for. You could play Decrypto almost as well by thumbing through a dictionary four times and using a random number generator to make your codes. 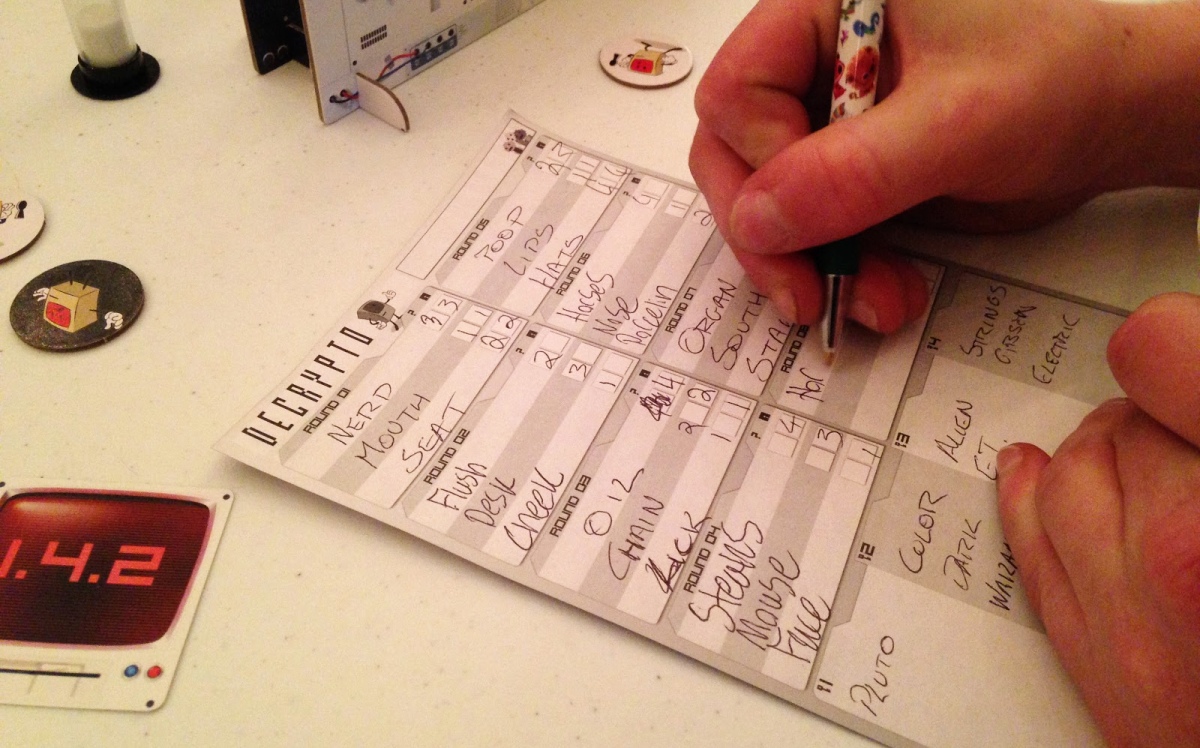 Yet I still love it. I even love how it has to be seen to be believed, first in the teaching and then in the playing, so much so that even ambivalent board gamers I’ve shown it to have come to enjoy it simply because almost everyone enjoys and immediately relates to the act of trying to trick your friends.

Everyone has their in-jokes and secret references, which they try to bust out at just the right moment. Everyone enjoys trying to pretend the clues they were given are VERY BAD AND DEFINITELY NOT IMMEDIATELY OBVIOUS, NO SIR. Everyone enjoys busting out the optional sand timer to make someone else hurry up, just for the sake of being a word-jerk. And who doesn’t want to be a word-jerk?

I do. I want to be a word-jerk. I sure hope you do, too. If that’s never appealed, if word games or party games have never been your bag, Decrypto isn’t going to yank the handbrake on your life and spin your tastes a full 180, but otherwise I recommend everyone else, everyone else, try this. Try it in two teams of two. Try it with ten players. Try it turn-based or SIMULTANEOUS. Decrypto is a game about which I have barely a bad word to say and it reminds me of the mission with which we began Shut Up & Sit Down seven years ago now: To persuade people like you that a few bits of cardboard in a tiny box could somehow conjure magic and magnificence, right there on your table.