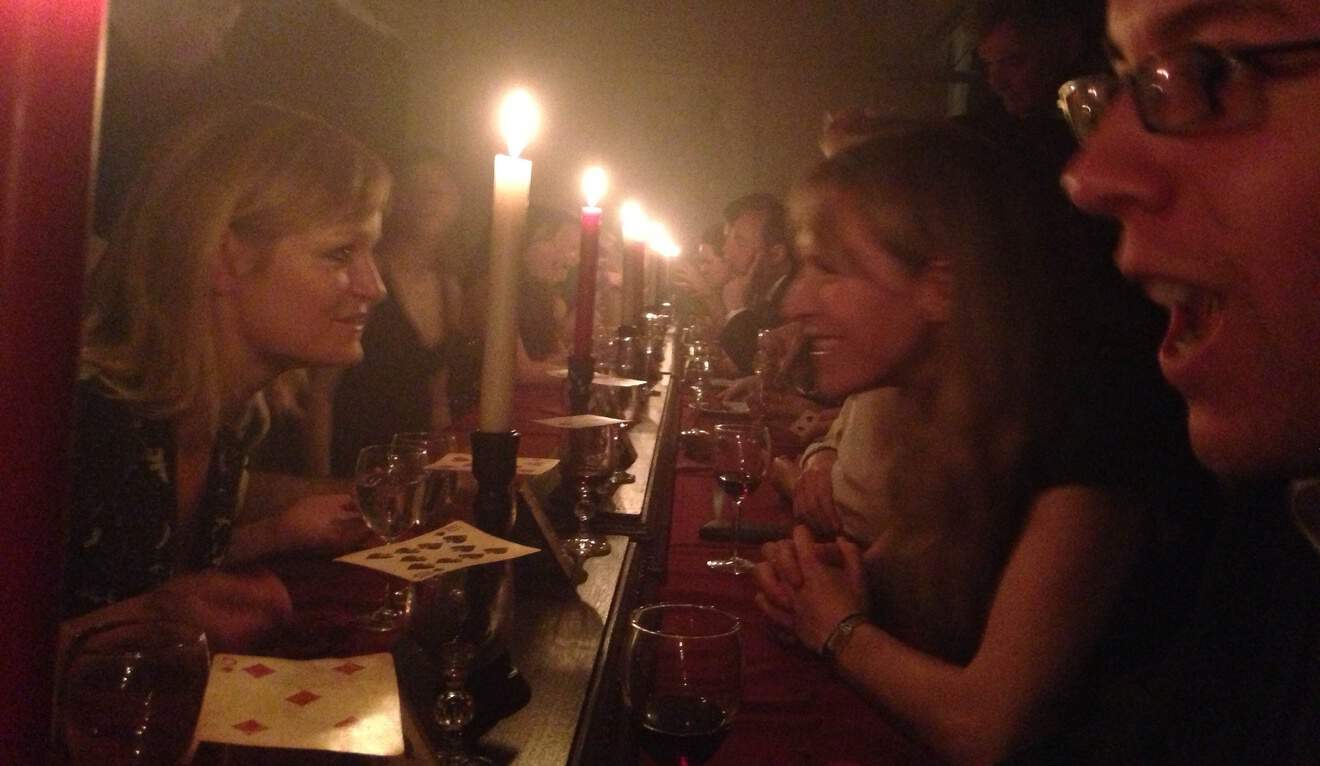 [Good news, everyone! We were clearing out Quinns’ stuff and we found something he was apparently too scared to publish. By way of showing respect, we’ve published it here in full.]

I’ll be honest, I didn’t really want to write about this event. In the words of one of the people I ate with, I come out looking like a “c*nt.”

Last month SU&SD was invited to the Betrayers’ Banquet, another London-based installation, perhaps a little sexier than Pip’s recent adventures of being locked in a room for an hour. It is, essentially, Satan’s dinner party. At one end of the table you’re served course after course of wonderful food. Down at the bottom, you get inedible slop. But you can improve (or potentially ruin) your position by engaging in the prisoner’s dilemma with the diner sat opposite you.

As a pro boardgamer, surely this would go well for me. Surely.

If you’re not aware, the prisoner’s dilemma is as simple as it is fundamentally annoying to me, because it’s a game with no solution- a moral Kobayashi Maru. In the context of the Banquet, here’s how it worked: When tested, you and the diner opposite you each secretly select one of two tokens: The goblet of trust, or the knife of being a total dickhead. If you both reveal goblets, you each go up five seats. But if someone reveals a knife, they go up 10 seats, while the other goes down 10 seats. If you both reveal knives, you both go down five seats.

Just me, unlimited wine, and a game with no solution. Here’s how that worked out for me. For reference, I started near the bottom of the table. 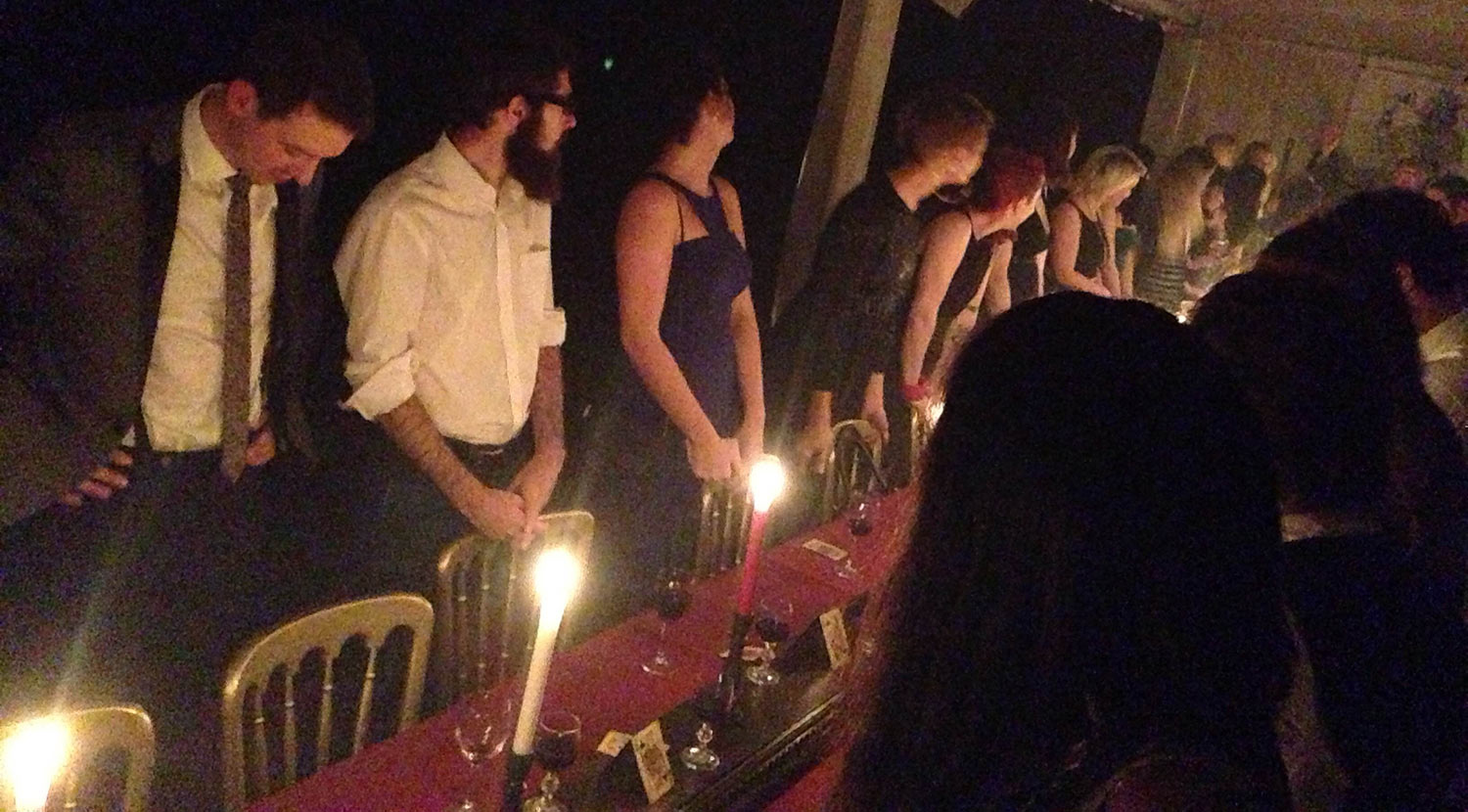 Round 1: In Which Quinns Destroys All His Credibility

In one of those astronomical coincidences, in a room full of journalists and celebrities, I began the dinner sat opposite the UK Agricola champion.

Of course I ruined him.

Perhaps it wasn’t quite as simple as that. This curmudgeonly man was rolling his eyes and grumbling at the cloaked staff trying to create an atmosphere, and convey the evening’s plot of us all undergoing some Freemason-esque ritual.

Our crap, watery potato starter arrived. Just a few seats up I could see diners enjoying something hot, with meat in it.

“As I see it,” the Agricola man began, “There’s a flaw in this game. If we both trust each other, and both always show goblets, there’s nothing to stop us advancing to the head of the table.”

“Right,” I said. Being a gamer, I’d had the exact same thought weeks ahead of the event, as I’m sure he had.

“So we’ll both show goblets,” he said.

He wasn’t here to play. He was here to win. We drained our sherry, signifying we were ready to be tested, and the two cloaked actors revealed our tokens with a great flourish: His goblet, and my knife. A cry went up around us at this theatrical treachery, the very first of the evening, and I was catapulted up into the middle of the table. Mr. Agricola Champion had forgotten the metagame. His tactic had one flaw, which was that I didn’t want to sit next to him all night. 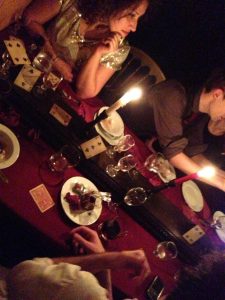 Round 2: In Which Quinns Encounters Humility

Walking up the table a problem with my own strategy became apparent, bringing with it a feeling more nauseating than any guilt. When the Betrayer’s Banquet staff tell everybody up the table to shuffle down and make room for you, and you’re alone, they’re basically announcing via a megaphone that you’re a loathsome snake.

…Which wasn’t even my main problem, which was that I actually wasn’t walking up the table alone. The Agricola Champion was coming along.

The women all shared glances. I put on my most winning smile. Time to put the ol’ charm to work!

Round 3: Guess how that went

I did my best to arrive back at the bottom of the table with humility. This was made harder by the Agricola Champion continuing his life mission to tell my new partners of my past mistakes. Every single time I changed seats he’d be right along, a dimly lit imp, the heavy, ugly c-word emerging from his lips like an egg. “He betrayed me. He’s a *c*nt.”*

We were now some 90 minutes into the dinner, everyone was drunk, and everyone down at the bottom of the table was hurting, hungry and drunk. The game had been running for long enough that the foot of the table had become the domain of either players who’d been betrayed, or players whom the two sweating, overworked adjudicators hadn’t given their fair number of turns. It was awful. A dozen people pushing around plates of pickled radishes, all of them either too moral or, in my own case, too immoral to be good at the game.

My third partner, though, was the best conversation I’d get all night. One of the Greenpeace Activist who’d recently climbed London’s Shard, she was very kind as I asked her about her work. 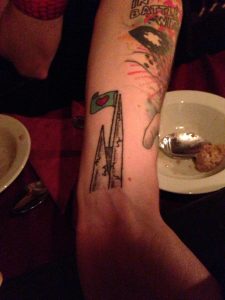 Very, very cool. Of course I couldn’t betray her.

Through the chatter and candlelight, I heard the cry that meant someone up there had betrayed someone else. Miserably, this new loser’s arrival below me meant I was pushed apart from the activist, and was now sat opposite someone who was just grumpily checking her phone. Sod it, I thought, too disappointed to bother inventing a new my plan, offering to play my goblet to her dagger anyway.

The adjudicators came. She “betrayed” me, as planned, and to the whooping of everyone sat around us, she was spirited away as I was shunted back against the wall. The worst seat in the game.

But for the first time, I was actually having fun. I was finding my way around the prisoner’s dilemma. 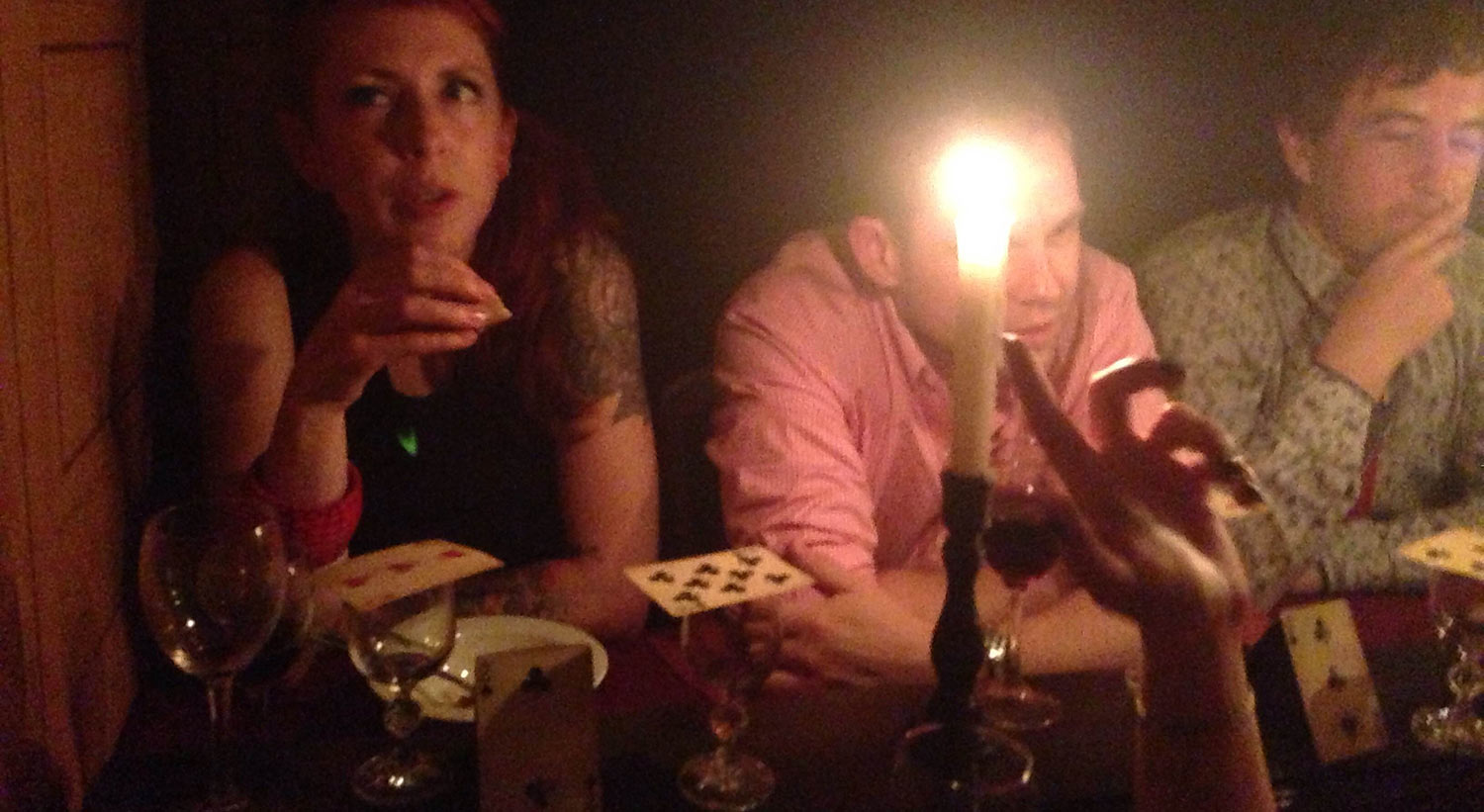 In the final hour of the night, I found my game. The dregs of the table would come to me, and I’d offer to catapult them back up into the fray. The look on their faces – the shock at someone’s magnanimity in this awkward evening – was better than any food I could have been eating. And for the first time, when Mr. Agricola Champion materialised like some spiteful goblin to tell people I was a c*nt, my neighbours defended me. My fall from grace, purgatory, and redemption, all in one evening. Perfect.

Just a few seats up, the drama of the evening was kicking off. A woman had been betrayed, flown into a rage and thrown a glass of wine at her opponent. Nibbling on a chicken’s foot, I considered how grateful I was not to be playing.

Finally, at the end of the night, something magical happened. Immaculate desserts, great cups of chocolate mousse and raspberries, began arriving at the bottom of the table. The people at the head were carrying their desserts down to the men and women they’d betrayed, by way of apology. Which isn’t the magic part. That came from the women around me who didn’t eat dessert, and offered it all to me. TO ME! I left the Betrayer’s Banquet not stuffed, but certainly buzzing with sugar and booze. A chocolatey Fagin, lord of the undertable.

Tickets for the Betrayer’s Banquets in November and December are still available. As to whether I’d recommend it? The sad part is, I absolutely couldn’t.

It’s all down to the maths of it. It’s a terrifying £100 per head. Plus, there’s the very real chance you’ll start in a horror-seat and will stay there all night, at which point the biggest betrayal of the evening will have come from the organisers. If you really want to play with your food, you’d surely do much better spending just half of that money at a well-reviewed restaurant, letting the chefs play with you.

Still, a big thanks to the organisers for inviting us down, and apologies to the UK Agricola champion. In your defense, you weren’t wrong. I am a bit of a c*nt. 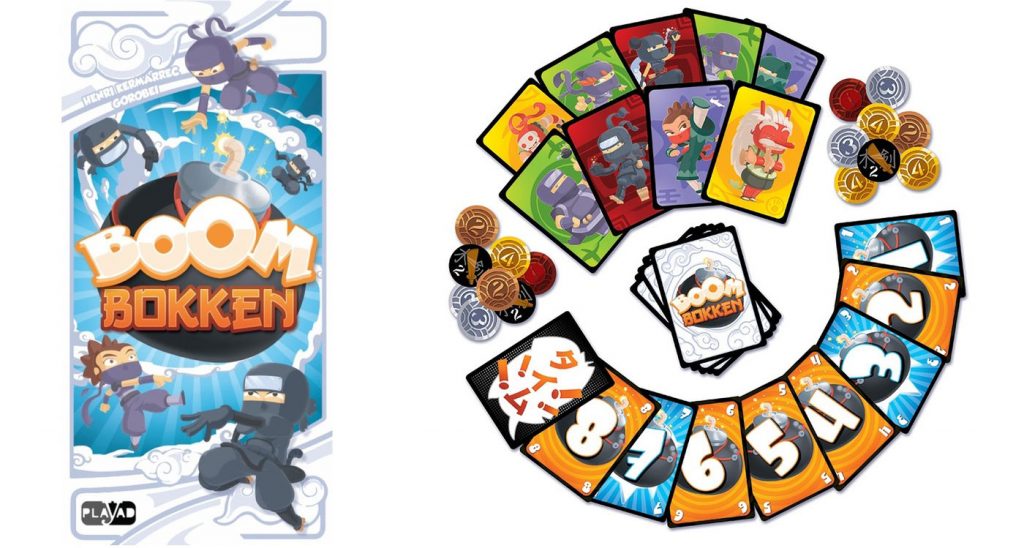