The Condottieri were miserably disloyal mercenary captains who managed to get a monopoly on warfare in Renaissance Italy. Having achieved this, rather than continue to get their men grubby in actual battles, the Condottieri instead got pretty good at fighting their rivals’ ability to fight battles. By deploying intimidating armies and outmaneuvering each other, they’d often “fight” “wars” without ever spilling blood.

(A consequence of this was the Condottieri continuing to thunder around at the head of armies consisting of very fancy knights even as the rest of civilization had transitioned to muskets, which ultimately led to Italy being invaded by almost every country in Western Europein the 15th century. That’s what you get for all your fancy posturing.)

Where was I? Oh yes, games. 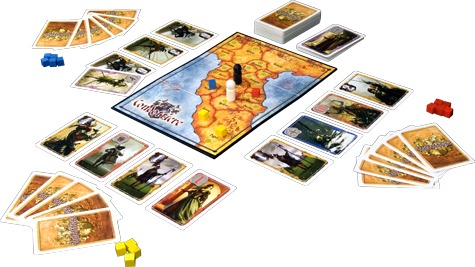 Condottiere sees 2 to 6 players trying to take control of four adjacent territories in sunny Italy, and you’ll do this through a hand of cards that all represent either troops or a special bonus effect. But you won’t be fighting any actual battles. Come, now! That would be vulgar.

The Condottiere token will be placed in a territory. In their attempt to win it, players take turns to either put a card into that territory, or pass. Once everybody’s passed, the player who put in the strongest total army places their control marker in the territory and you move onto the next locale. Once only one player has cards left, they keep those cards and everybody draws back up to full strength. The winner’s the first one to collect four adjacent territories. It’s Connect 4 meets Poker played with gorgeous cards on a gorgeous little board.

Where does the scowling come in? Right.

The Condotierre token is placed in beautiful Milano. You want Milano. You feel it is your… destiny. You’re up first, so you drop a strength “10” card onto the table, the strongest in the game. The next player in line folds. So does the next. You stay cool, even as your heart feels like it’s falling down an endless flight of stairs.

Smiling, the player opposite you – let’s call her Kendra – drops a strength “1” card onto the table, the military equivalent of a youth group. You scowl. Your army would crush hers, but you can’t drop out of the race. If you do that, Kendra could go on to play card after card until she just edges out past your 10. 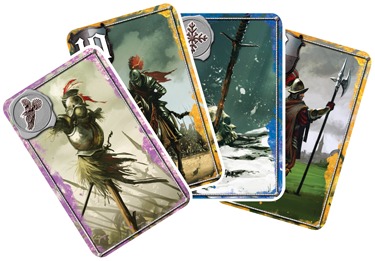 You look at your hand. Your lowest card is a 4. Your scowl grows. You play the 4 anyway. Now it’s Kendra’s turn to scowl at your stubborn ways. She plays another 1. You play another 4. She plays a Drummer card, a bonus that doubles the strength of her boyscouts. You’ve now got strength 18 to her 4. Just how much do you want Milan? Pretty bad, so you play another card, a 5, putting you at a ridiculous 23 to her 4. You just won’t quit. But reaching into the furthest reaches of her hand, Kendra produces… a Winter card.

Winter’s one of the few rare cards in Condottiere. It reduces all army cards to strength 1, so she’s now got strength 4 to your 4. By this point your scowl is of meteorological proportions. You need to get bogged down in a losing battle like this like you need a second arse.

But what’s this? You’re throwing down a Scarecrow card, revealing your strength 10 army card to be nothing but rumours and allowing you to take it back into your hand. Kendra scowls. She thought she had you locked up, but no, you’ll walk away from this strong enough to have a crack at ruining her life next time she needs a region.

Seeing your retreat, Kendra finally passes instead of playing another sodding card. At which point the stormcloud of your face begins to disperse. You play a Spring card. Winter’s over, meaning your forces are back up to strength and because Kendra passed, she can’t do a thing about it. Milan is yours.

A chorus of boozy cheers and groans erupts from the rest of the table. You’d forgotten they were there, but you just gave them some great theatre.

Having won the battle it’s up to you where to place the Condottiere token next. Your eyes fall on the coastal region of Parma. If you take that, you’ll have your four connected regions and that’ll be the game.

But if you lose, that region’s going to end up in somebody else’s control, permanently blocking off your potential victory. You eye up your five remaining cards. Reaching down, you place the token…

Where do you place it? Here’s a suggestion: How about you buy this game and find out?

Smoke and mirrors, smoke and mirrors. That’s what this game is all about and I’m absolutely terrible at it. But, just like with Citadels, it’s pretty astonishing that there is so much fun packed into one tiny box. Condottiere is all about choosing your moments and picking your battles. Just as each confrontation is something of a dance, a series of poses and postures where your opponent doesn’t really know how powerful you are, these moves are part of a larger, grander ball that you perform across the country, where you also bluff about the regions you really do or really don’t want to squabble over.

You want to try to exhaust your opponents by making them burp up cards in battles where they needn’t have done so, so that in the next confrontation you have a bigger and more powerful hand. Of course, you never know everything they’re holding until you arrive at the battlefield and survey the troops. Then, it might all be too late.

Terrible at it. Absolutely terrible. I’d be a rubbish Italian.

* Condottiere’s actually from the same line of games as Citadels, which we covered back in Episode 1, so if you own both you can put them both on a shelf next to each other and they’ll have the same size box and the same format of box art and they’ll MATCH ohmygoodness

(Header image courtesy of boardgamegeek.com, because I gave my copy of Condottiere to my friend’s parents as an emergency Christmas present. Not many games I’d be comfortable giving to non-gamers like that. Nope, not many.)