You know when you buy a game, and you know it’s going to be good?

“This will be a great time,” you announce to your cactus or spouse. “I have been convinced by this game’s art and premise that I will enjoy myself.”

Your coat’s still on. You pick up the phone. “Barry?” You say. “It’s me. Would you like to come over and have a great time?”

I was convinced Robinson Crusoe was the game for me. Guess what!

Crusoe is a co-operative game where 1-4 shipwrecked players do their best to not die in a tropical wilderness. The box itself is like some piece of flotsam that might wash up on a beach. Mysterious, poisonous, bloated with cards and concepts.

And in one sense, Crusoe is the game I hoped it would be. It’s so bleak that I started laughing during the rules explanation and never really stopped. 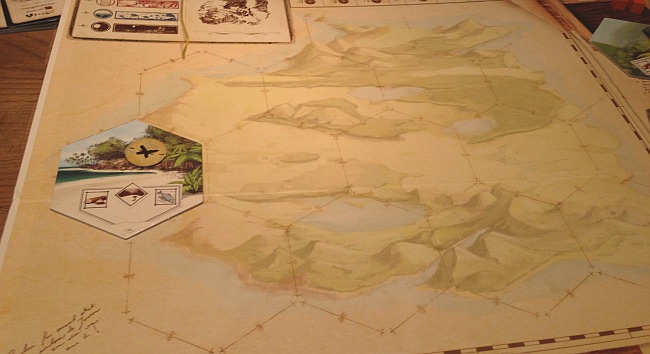 Players begin on a single “beach” tile of a larger, unexplored island, with an objective hanging over their head like a thundercloud. In the case of the starter scenario, players need to amass wood, and assemble a grandiose bonfire across whole months. Light the fire, you get rescued. Simple!

You decide to spend your character’s turn exploring. Hopefully you’ll find a tile with some trees on it, and on later turns you’ll—

“WAIT,” cries the player opposite you, the one who’s played Crusoe twice before. He has a flurry of white stubble and a wonky eye. “We don’t like to do anything… rash… around here. 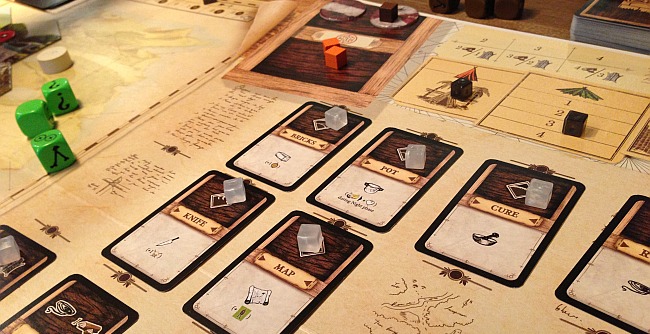 “We’ll need food,” he tells you, his loose eye orbiting like a washing machine. “One cube of food per player, every turn. And shelter! So we’ll need furs. Which means weapons! And that means rope.”

“NO-OO,” howls the veteran, teleporting spittle onto the lens of your glasses. “We need a map first! Don’t you know anything?! Look, you make a map. I’ll read this bible to raise our morale meter. Go!” 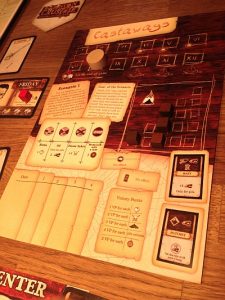 This game has one of the greatest themes I’ve ever encountered. You and your friends exploring an island! Someone finds a river, solving your food problem. Another finds a source of lumber! Joy.

As the weeks pass you don’t just chuck up a shelter, you develop its roof and walls seperately. You fill it with the laughably mundane stuff you make, each one a tiny, touchingly human victory against darkest night. Your team’s basket. Your sling. Your belt.

Always, though, the board has all the horrific potential of some creature rustling through a distant bush. Nobody wants to draw a card from the sinister animal deck. Nobody wants to roll the dice. Best of all is the game’s deck of “adventure” cards, which are so inappropraitely named I’m giggling even as I type this.

Rolling the dice might see you rolling the “question mark” icon, which you’re best off mentally appending to the question “How are you going to get f**ked?” 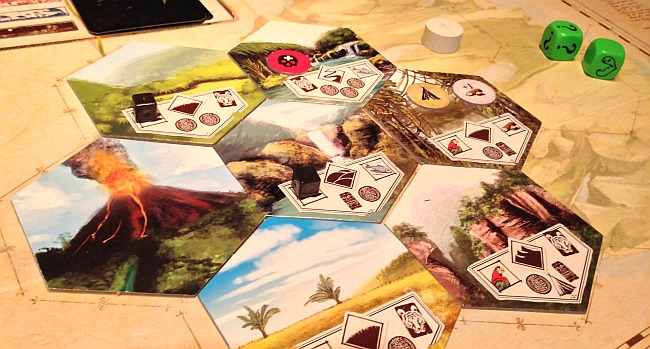 Let’s say you’re at the shelter, trying to craft the pinnacle of your group’s technological knowhow, which is probably a sack or a brick or something. You roll a question mark. Everyone around the table groans because you have an adventure! You draw the card with a heavy heart.

This next bit’s really cute. You draw the adventure card, but it doesn’t do anything right away.

So you’re working on your sack, and you draw the “Shoddy Construction” card. You notice that this shelter you’re working under? It’s actually a bit rickety. Now, as with every adventure card, your group has two choices. One! Laboriously shore up your shelter, which you really don’t have the time to do. Two! Ignore the card, at which point it gets shuffled into the event deck you draw from every turn. Meaning every turn there’s the possibility your shitty shelter is going to collapse. Inevitably during a snowstorm.

All of these adventure cards are great, and so, so thematic. You climb a hill, only to see stormclouds on the horizon. You’re skewering fish on the beach and stumble across a human corpse. You’re hunting a parrot for lunch and end up getting bitten by a snake and it MIGHT go septic unless your group goes casting off into the wilderness for a cure.

As you can see, this surprising, funny, colourful game. The best thing I can say about Crusoe is that you really do feel trapped in this horrific place with your friends.

The problem, though – and it’s overwhelming – is that Crusoe’s challenge is opaque. 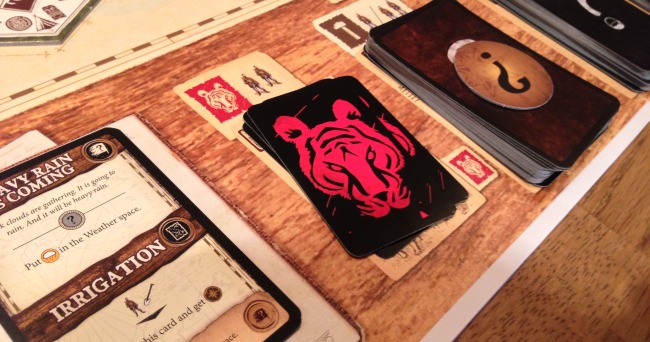 When you’re playing, how important is weather? Shelter? Inventions?

Can you ignore hunting? When do you start completing objectives, or stop exploring? You need to play it to grasp it. Which means playing Crusoe is mostly an experience ofgetting f**ked and then ow and jesus,until by your third game you have a vague idea of what you’re doing.

But that means the fundamental problem with co-op games – bossy players telling the rest what to do – is not only not tackled by Robinson, but actively fostered.

Each player only gets two actions each turn, so it’s the simplest thing for one player to mentally assign everybody else to different tasks. They can disagree with you, sure. But unless they do so from experience with Crusoe, they’re going to lose you the game. 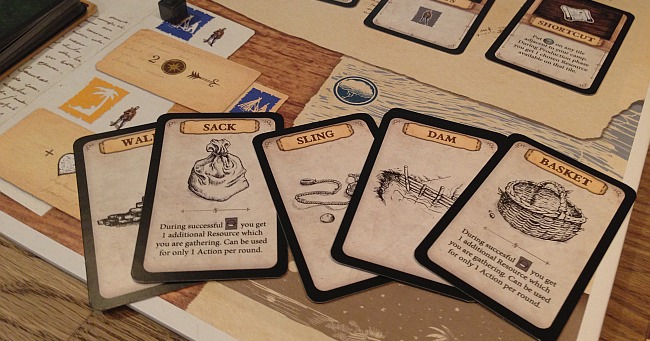 Crusoe isn’t the playground it appears to be when you open the box. Nor is it a fascinating yet accessible puzzle, like Ghost Stories or Pandemic. It doesn’t give players a reason to keep to themselves, like Shadows Over Camelot or Battlestar Galactica, and it doesn’t put players in charge of their own part of the game, like 1812 or Space Cadets.

In short, we could never recommend Crusoe over a game that… that actually functions as a game. Because what we’ve got here is just a cryptic hive of mechanics.

But what’s this? What’s that shape on the horizon? Why, it’s Náufragos!We’re saved! 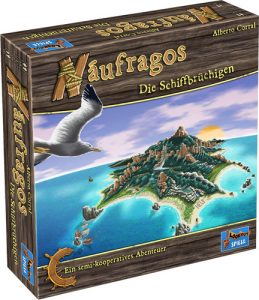 Náufragos is another game about castaways that’s coming out this year, and it’s allegedly excellent. I haven’t played it. But I can tell you it’s only semi-cooperative, because in the end, if you do get rescued, the winner is the player who “tells the best story” and gets the 19th century equivalent of a book deal and a chat show.

So, I’m waiting for that. Even though it doesn’t have Crusoe’s components. Its colour. Its dark dream. Because it’s the right thing to do.

Dammit, now I’m doubting myself. I suppose you could visit Crusoe’s Cursed Island if you liked, so long as you and some friends all gained familiarity with it at the same rate. So long as you stuck together. So long as you played safely.

But I won’t be held responsible, you hear me? Good. 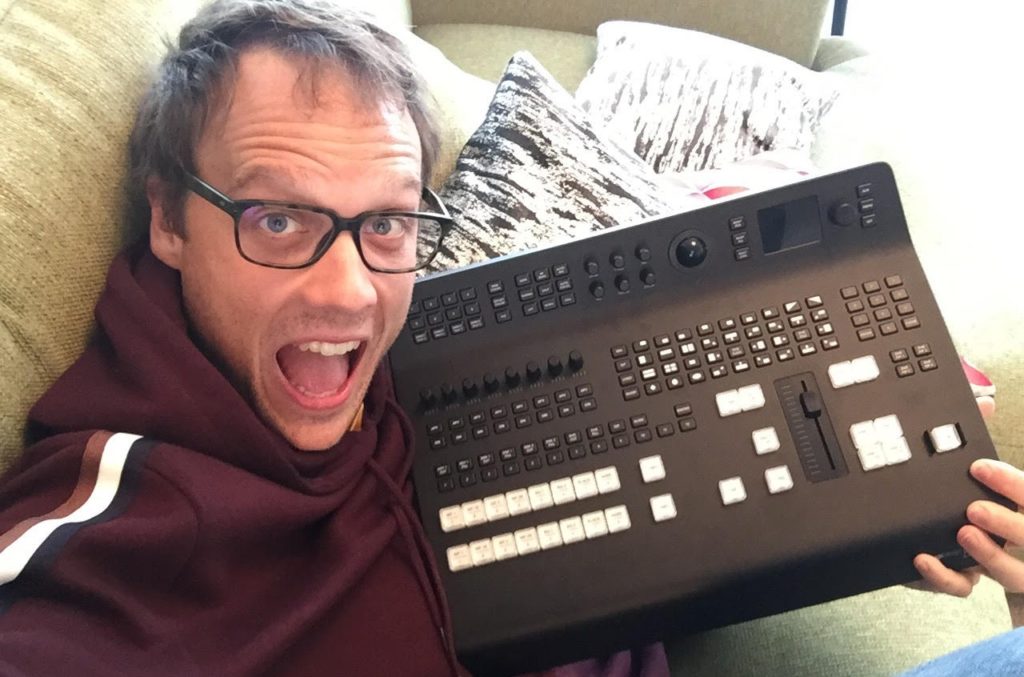