Quinns: Say hello to Fortress: America (and imagine it responding to your greeting with an excitable 21 gun salute).The ENTIRE WORLD (made up of three players) is invading near-future America (controlled by one player). I’m talking bombers over Boston. Hovertanks in Houston. APCs in… in, uh…

Paul: In Annapolis! This may well be the ultimate in what we call Ameritrash, big flashy board games with lots of components.

Fortress America is a box pregnant with war and the moment you pull that lid off hundreds of tiny figures are ready to scuttle out. Big, big handfuls of dice are waiting to be rolled. A big, broad map depicting the United States of America is just gagging to be spread across your tabletop. There is a very real danger that, playing this game, you’re about to overdose on plastic. Quinns: In other words, this is not the kind of thing we usually recommend. It’s bombastic strategy of the “toy soldiers” variety. A game that comes juddering to a halt every few minutes to give someone a die to roll.

But you know what? The strategy Fortress America does have is really, really interesting. The key word here is Fortress.

Quinns: I’ll give you an America in a minute!

Quinns: Then you’re clearly going to be one of the INVADERS! The Invading team in Fortress America have to capture 18 of the many cities around the map. To begin with, that’s easy. You’re rolling over the border with entire toy shops worth of soldiers, breaking apart the American defense like an oatmeal cookie. You’ll snatch up 5 cities, 8, 10, 12, 14, and an hour in, the game will clearly be won.

…and then something interesting happens. Suddenly, you’re looking at a problem. Your troops are spread too thin to probe deeper into America’s disgusting capitalist belly. Worse, you HAVE to be able to trace a line of conquered regions back to your own, personal border with America, or those troops presumably run out of borscht / enchiladas / sweet and sour pork and starve.

DISCLAIMER: Shut Up & Sit Down is written by a team with the deepest respect for cuisine from all peoples and beliefs. I think Paul even ate a curry once. Paul: WELL, funny you should say that, as the invading armies are never named, though I’m sure we’re supposed to guess where they’re invading from. Those of you who listen to our podcasts might remember me calling this game a kind of survivalist fantasy, because set against these invaders are the valiant defenders of the United States and, as they would be in any and all survivalist fiction, these guys are fiercely stubborn and refuse to back down. They’ll hold on to their cities with their teeth if they have to, and sometimes they will.

Y’see, initially, the US player is beset on all sides by overwhelming armies and the cities nearest the invasion, cities like New York, Las Vegas and Seattle, are doomed to fall. But as the turns go by and as the unconquered territory of the United States shrinks away under this onslaught, those survivalists start to surface. Resistance fighters emerge, uprisings begin and… secret technology is unveiled.

Quinns: Yes. This is the surprising ingenuity hiding in game that’s basically throwing dice at Johnny Foreigner. Fortress America is secretly a game balanced on a knife edge.

Initially, the USA seems doomed. Our America player went as far as to grumpily declare the game over about 45 minutes in. But every turn America also gains a Laser Cannon that can hit (‘SSSHT-BOOOOM’) any unit, anywhere, if you can just hang on to enough territory to deploy them.

More horrific still for those invaders, every city America recaptures gifts them with extra reinforcements. 90 minutes in, the tidal progress of the Invaders first slows… then it stops entirely… and then, with the Moon’s own miserable momentum, they’ll feel themselves being forced back. 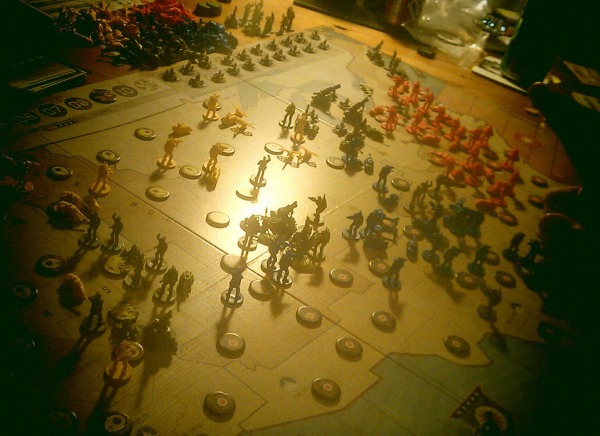 There. That’s as far as our invading team got.

But DID YOU HAVE FUN, Paul? Nudging around your Mexican militia? Rolling die after die after DIE ALREADY.

Quinns: I dunno. It seems like the only question that matters.

Paul: Yesyes, okay. Well, I did. This is the lightest of the light wargames, something with really simple mechanics and an awful lot of stuff to constantly handle and finger and fiddle with between your sweaty digits.

The invading players get to do a little bit of negotiation, though their actual teamplay options are limited and you’re supposed to just get on and roll dice. And you do, lots, because everyone has a half-dozen battles a turn.

Then you get to that pivotal moment, that point of balance, and you realise that this is really the neatest thing about Fortress America. At the start, the invaders are a tidal wave, but towards the end of the game, the United States is a sleeping giant that hasn’t so much been awakened as peed on by the neighbours cat. It’s reborn as a nation forged in battle, constantly churning out new units while the invading armies… well, they just don’t get much in terms of reinforcements. They run dry.

So yes, I was really impressed by how the game see-saws like this. Time is of the essence to both sides, but for different reasons.

Quinns: Yeah. Which is cool. It gives the game poise and hooks you in. But what are you hooked into, exactly? You’re dead right when you say that teamplay options are limited. The Invaders are really playing their own three separate games, is a disappointing thing.

This is not a disappointing thing: Fortress America doesn’t compare well to other 2012 release 1812: The Invasion of Canada (pictured), an even lighter game but one where the two teams have heated discussions and actually get to roll dice together.

I think the most talking that went on in our game of Fortress America was either convincing Tom he hadn’t actually lost, or you guys laughing as Las Vegas repelled my Chinese army for the ENTIRE GAME.

Paul: That was excellent, especially as my troops from [INDETERMINATE NATION OR REGION SOUTH OF THE UNITED STATES] trundled on by and figured you had everything in hand.

But. But. I don’t know if I’d recommend this to our readers. It’s not a light game, there’s a lot for you to keep in your head with seven different miniature types and dozens of regions, even just on your front.

Yet, for all that, it doesn’t have as much substance as so many games out there. 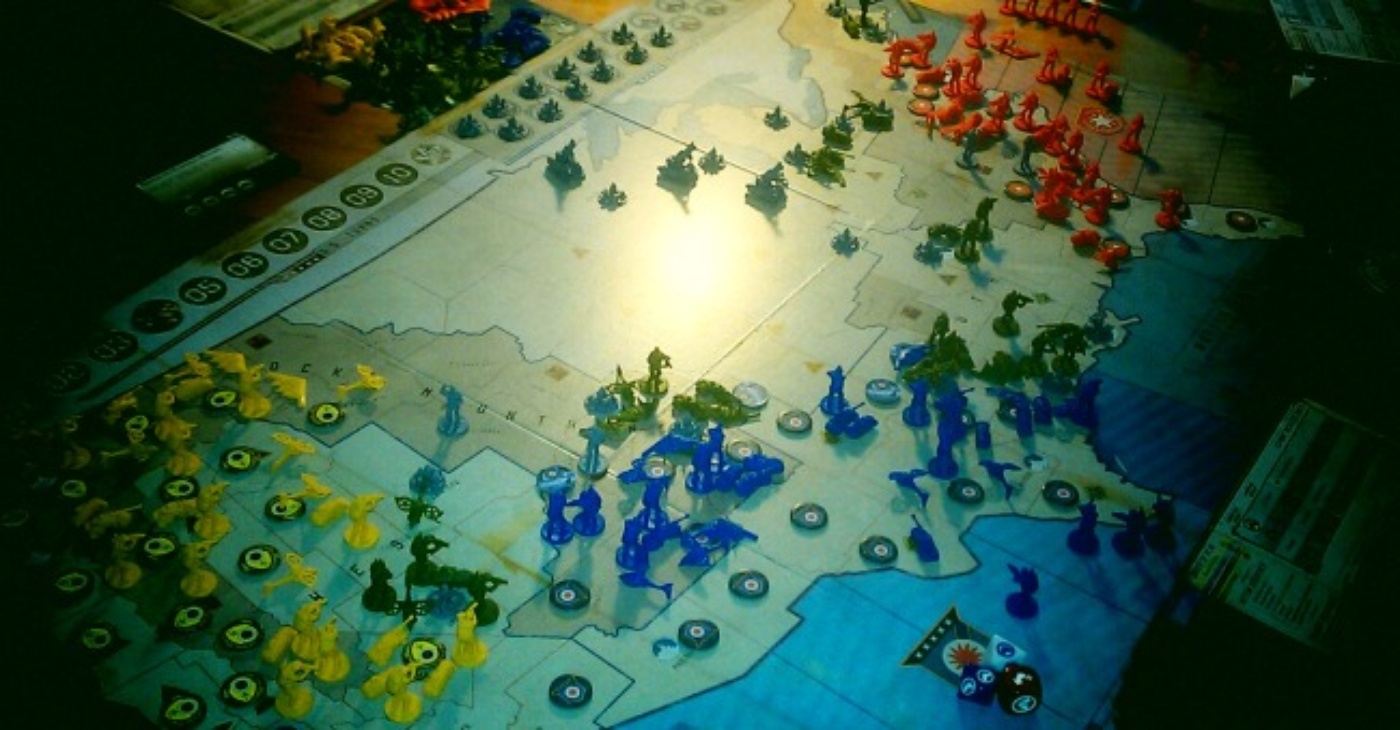 That said, if you’re an Ameritrash fan then this should still be on your radar, and it’s exactly the kind of thing that its publishers, Fantasy Flight, are good at making. It just feels a little too old-fashioned to me.

Quinns: Yeah. It’s an anachronism. Remember when we reviewed
Wiz-War, and we said it was a neat idea that made basically no sense? That’s because it was a license that Fantasy Flight bought dating all the way back to 1983. The game design felt bizarre, old, nonsensical, even. Like a gassy elderly relative you were having over for tea.

This is the same story. Fortress America actually first came out in 1986, and while Fantasy Flight have updated it, the core they’re being faithful to is archaic. It was a simpler time, then. I need to check Wikipedia, but I think people believed that plastic soldiers had souls.

Paul: Are you telling me you feel the same way? That this is gorgeous and certainly fun, but that you want something with a little more smarts?

Quinns: Exactly! The same way I feel about the point and click videogames that appear on Kickstarter. We’ve moved on! Let’s support designers that are building the temple of game design onwards and upwards. Nostalgia is important to human nature, but it’s like bleach. It’s something you have to own as an adult, but you shouldn’t play with it.

Paul: Ooo. Controversial. Although perhaps you’re right that this is the retro equivalent of board gaming. It’s dated, but it still has a certain appeal to a certain audience, and I think those people will know, when they read this review, that they’re not two stuffy British men and they’ll take great delight in tossing those dice and nudging those soldiers day in, day out. I like Fortress America, but I can’t imagine replaying it much.

Quinns: Miss you. I’ll be back from America soon. Want me to bring you back anything?