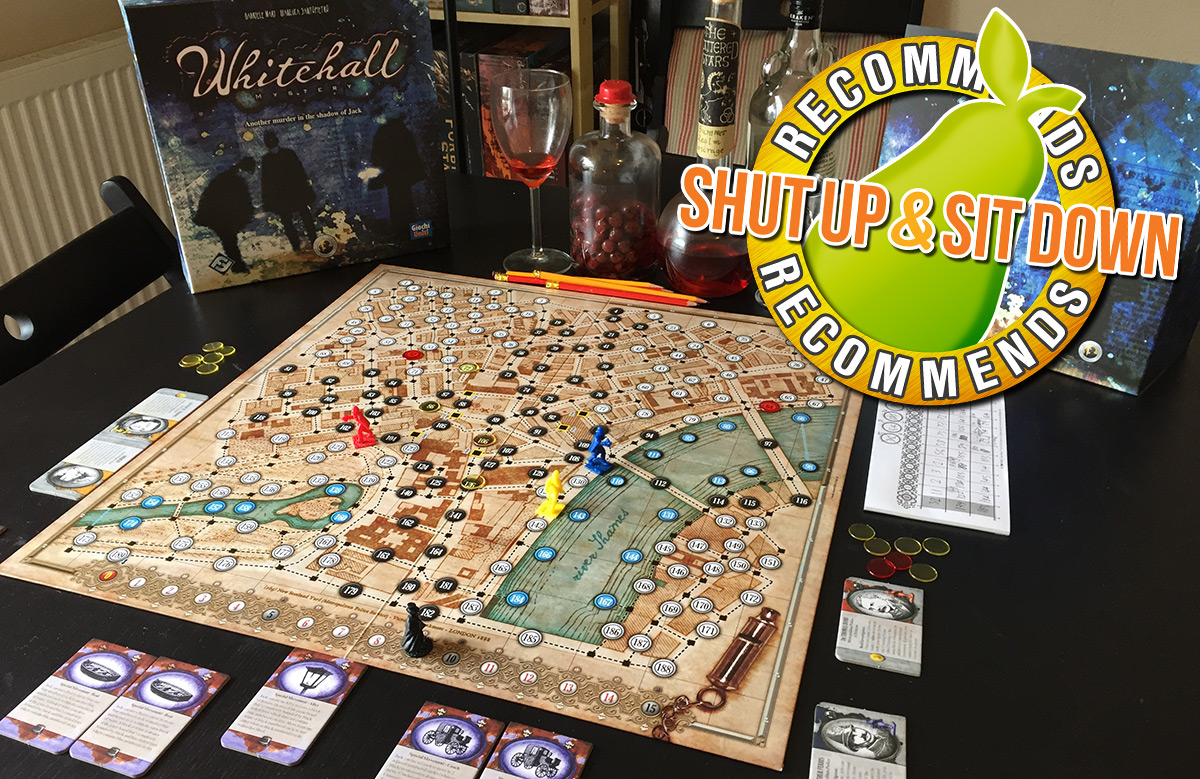 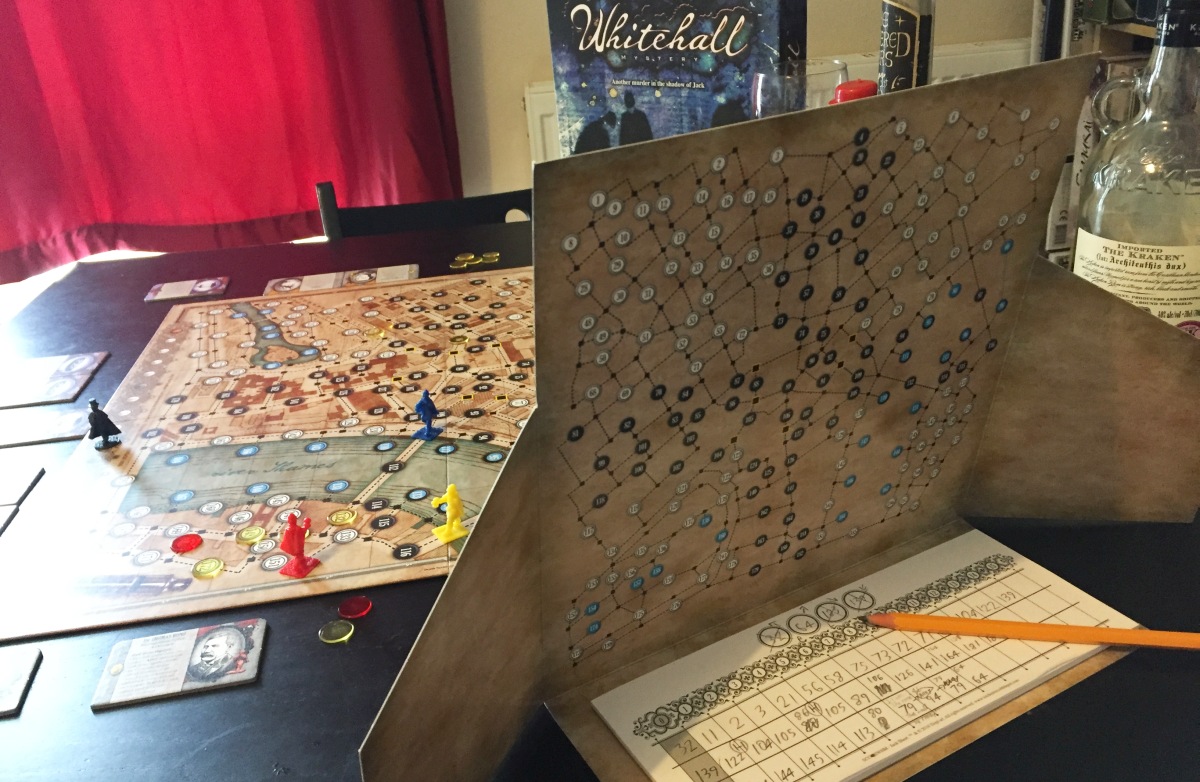 One player in Whitehall Mystery assumes the role of a real killer who may or may not have been Jack the Ripper, and sits themselves down behind their designated murderer’s screen (pictured above). They need this because instead of placing their pawn on the game’s board, they’re going to be writing down their moves as they slink invisibly across it. To win the game they must reach four spaces on the board known only to them, as if they were running around Satan’s baseball diamond.

The rest of the players will be working as a team to hunt down the killer. Each turn the murderer moves one space and writes it down, then each police pawn moves either 0, 1 or 2 spaces, and then each man can either “Check for Clues”, which forces the murderer to place a nicotine-coloured disc on any spaces near the bobby that they’ve passed through, OR the bobby can end their turn by “Arresting” a designated circle. If the killer’s on that circle right now, the police win the game.

Finally, the killer can’t move through the police and has to complete their lap within a brutal time limit. Et voilá! We have a fiendish game of deduction and prediction for the police, and a test of planning and misdirection for the murderer.

Well, from a design standpoint it’s 100% the same. In several other respects it’s about 60% of the game. Look! 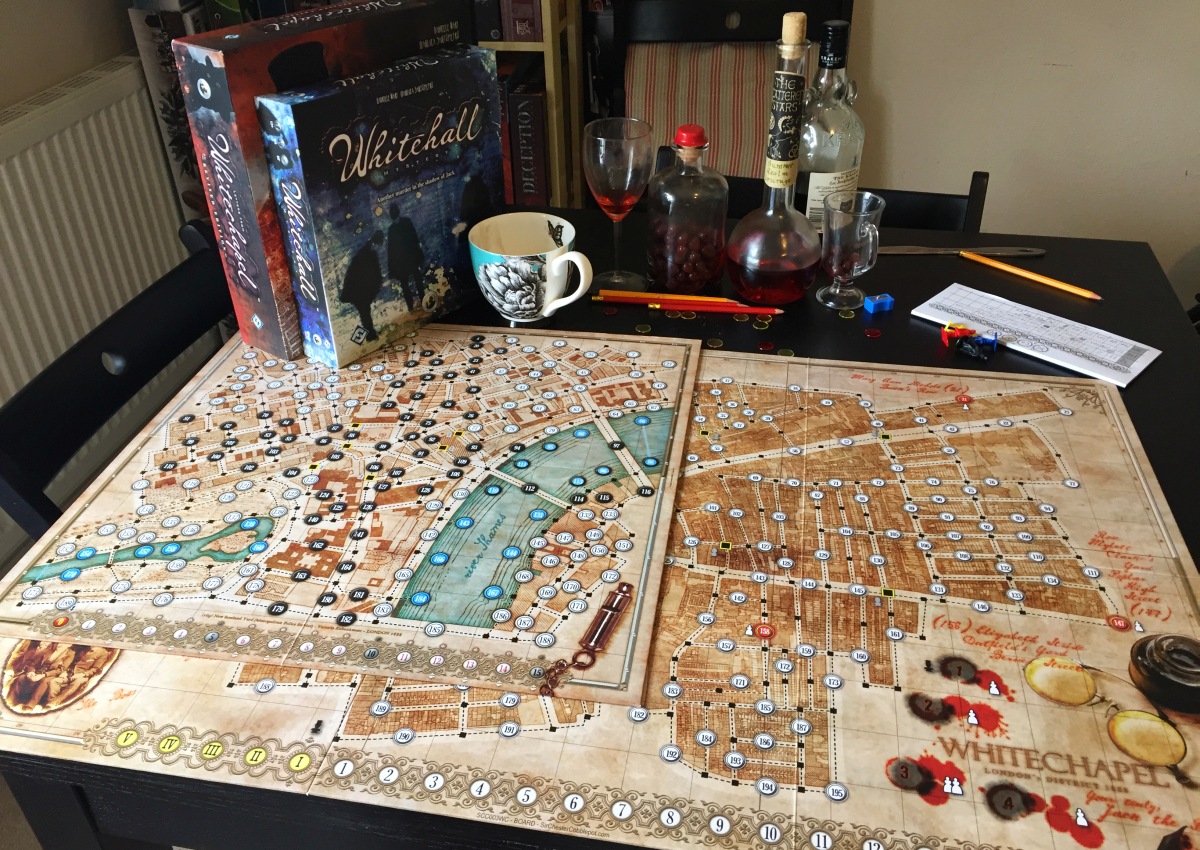 At first glance, Whitechapel’s sizeable red box and sprawling board have been reduced. But actually, if we look a little closer we’ll see the board has almost as many spaces- 188 to the original game’s 195. The more important downsizing is to be found elsewhere.

Fittingly for a game about the Ripper murders, the game of Whitechapel has been gutted. All of the fiddly rules to do with the patrolling of police and the wandering of victims have been cut out, leaving Whitehall with a significantly smaller manual. And there’s more! The original game’s busy player count of 2-6 has been reduced to 2-4, and the game’s rounds are shorter and there are less of them.

And you know what? As soon as I held this shrunken box in my hands, before I’d even taken the shrinkwrap off, I thought back to all of the over-long, overly-complicated hidden movement games of Whitechapel and Fury of Dracula that I’ve played and I felt like I’d been shown the answer to a riddle. I might have even said something like “Of course…” 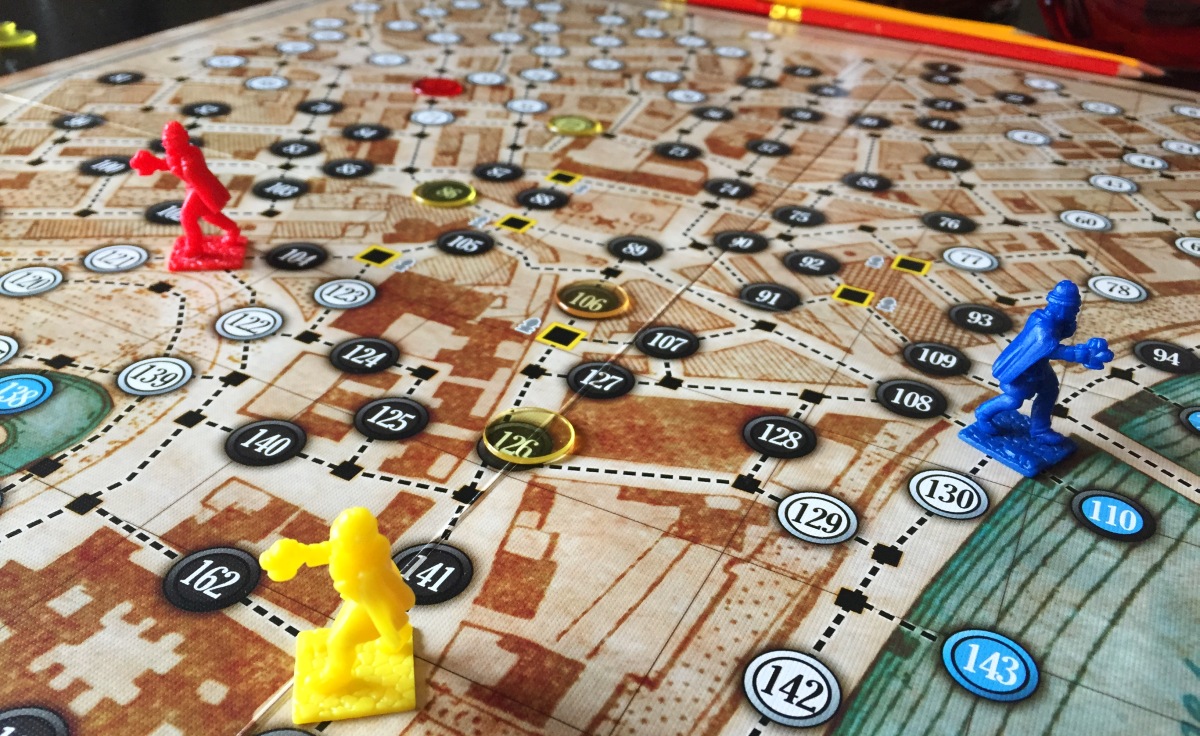 What’s the best thing in hidden movement games? Why, that would be the hidden movement. It’s such an exciting pitch, and it’s why we buy these games. We want to be on the lam, and/or trap a fleeing friend with our deduction and prediction.

And yet Fury of Dracula can’t quite offer that, not really, because so much of the game is in getting to grips with all of its weird rules and intricacies. Meanwhile, Letters from Whitechapel feels a little imperfect because of its demand that you control 5 separate officer pawns. So either you have a full five players, at which point there’s a greater chance that your individual policeman will be in the wrong place at the wrong time and will have to waddle across London when other people find exciting clues, or you have 2 or 3 players controlling all 5 policemen, which feels like the puzzle equivalent of being handed a police uniform that’s a half-size too big. “Where did this one of our two robo-cops search last turn?” you ask. “Was it this alley, or… ?”

Does this make the game too short? God no. You’re still looking at about two hours, or longer if your police team love to chat and theorise. So like everything else, Whitehall’s new length isn’t “Whitechapel but small”, it’s Whitechapel but the right size. 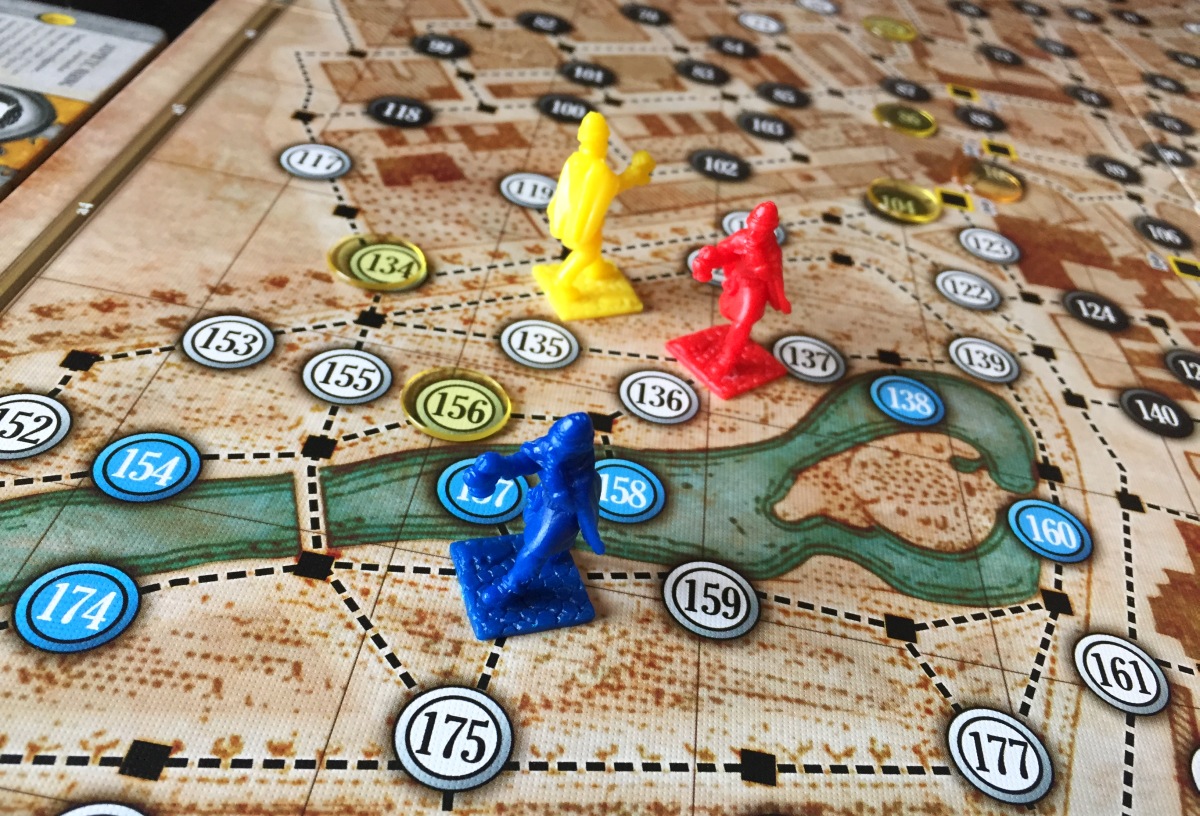 Which isn’t to say that everything is somehow simpler. My favourite change of all is how designers Gabriele and Gianluca have played with the arrangement of spaces on the board, complicating the puzzle without asking its players to learn any extra rules. Whereas Whitechapel’s board is a straightforward web of streets, Whitehall has a cramped city block, a looping park (seen above) and even a few bridges, all of which are waiting to trip players up.

And all of these districts will always be explored in every game because the killer has to get to each of them in a sequence of their choice. It’s just different enough from Whitechapel’s objective of “return home every night” that this game feels new and exciting, and it also gives the police room to theorise from the very beginning of the game. 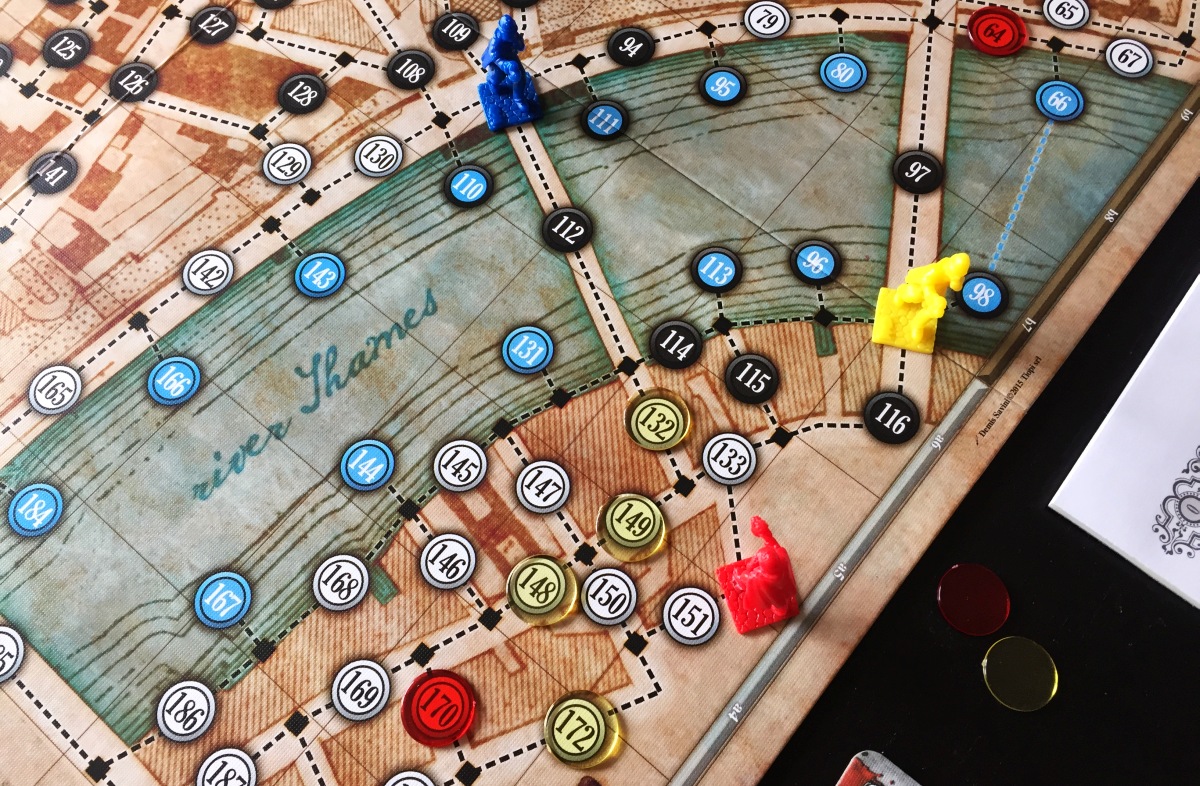 But maybe I’m spending too much time comparing these games? If the real Mystery here is the mystery of what the heck I’m talking about because you’ve never played a hidden movement game before, my God – put in a pre-order for Whitehall Mystery at your friendly local game shop immediately.

For the police team this game is a delectable puzzle because it’s alive. Simply finding a clue and placing a disc on the board feels dramatic, since it explodes out into more questions- when were they here? What direction were they travelling? And if you can answer any of those then you stand a good chance of being able to sprint past the killer and block their way.

It’s one thing to tap your teeth and solve a puzzle that’s fixed in place. It’s quite another thing to solve a puzzle because you predicted how your friend would move. But best of all, you get to enjoy the power dynamic in the room suddenly shifting as a reward for your efforts, where the player who’s been running rings around you for the last hour is suddenly using up their limited number of special movement cards, scrambling into hansom cabs like a rat trying to escape a trap. 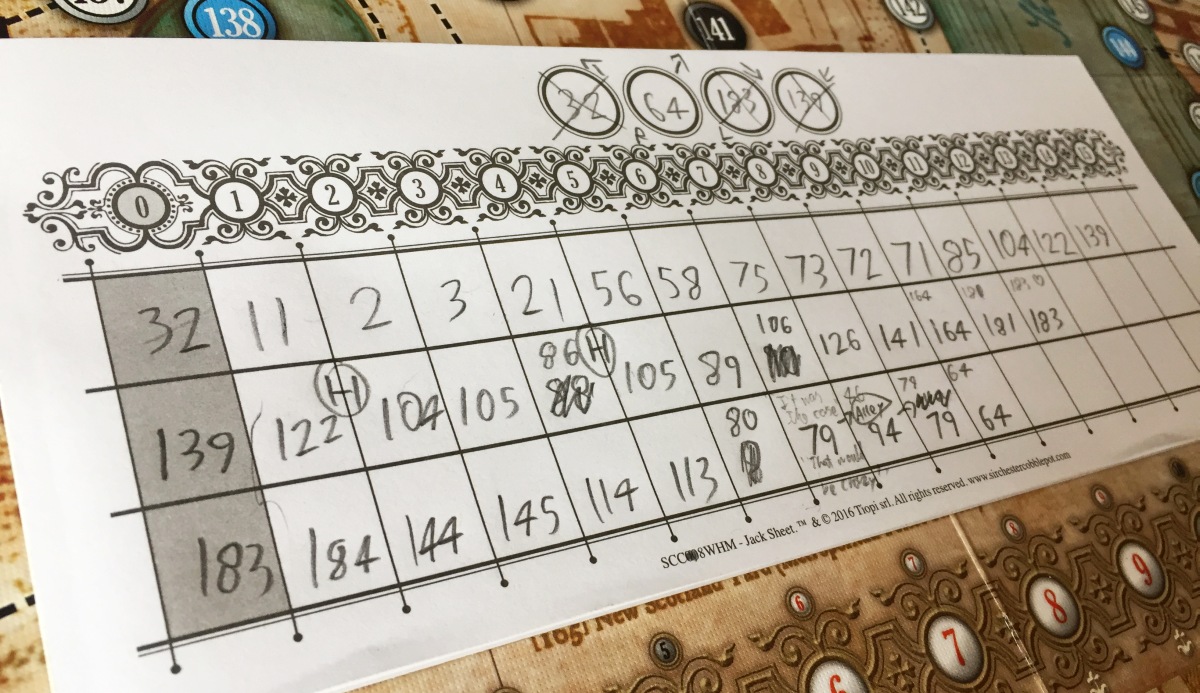 But then of course, you simply must try playing as the killer, which is an utterly different game and every bit as entertaining.

From turn one you’ll realise how exciting it is to be hunted, how delicious it is to listen to all of your friends talk about you when you’re right there, with someone routinely outlining your exact plan… only for the conversation to move on, the police unaware that if they acted on this idea then they’d win the game. It’s the social equivalent of a patrolling policeman shining their lamp in your face… and then walking past you, their brow knotted in concentration. This is awesome and it happens constantly.

Obviously this game is going straight into my collection, but what I’ll also say is that it’s getting slotted in beside Letters from Whitechapel like a shimmering little sibling, rather than outright replacing it.

The big brother-game still has a role to play whenever I have 5 or 6 people around my house who’d like to play a hidden movement game, but I also think that the two boxes are just different enough that if I have a great game of one, I suspect it’s going to make me want to play the other (which will want to make me play the first one again). 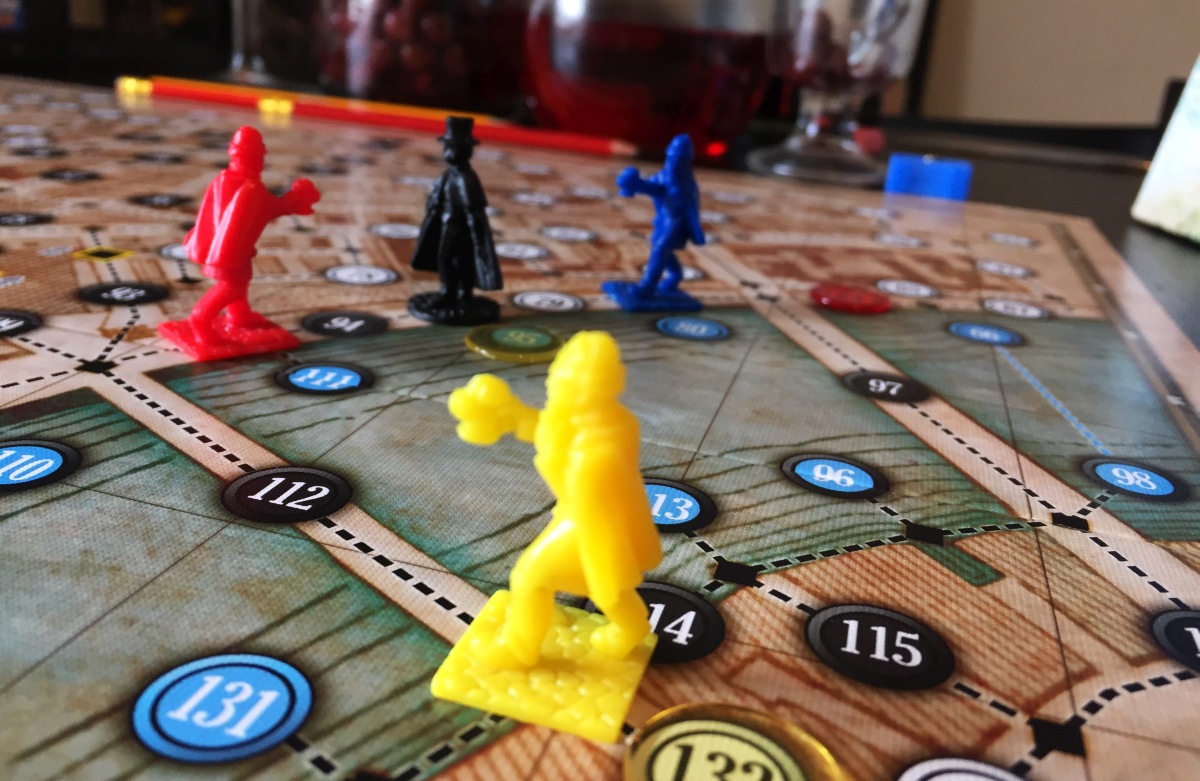 Are there any problems with Whitehall Mystery? I can think of one, but frankly I had to work quite hard to come up with it in the face of my excitement at what an excellent product this is.

Just like Whitechapel, a game of Whitehall can last a very variable amount of time. You could theoretically finish a game of it in 60 minutes, but it could just as easily take three hours if you enjoy chatting. So if that’s a burning issue for you? You’re safe. I’m not going to tell you to buy this game. But I’m afraid that the rest of you have no such excuse.

Wait. Crap. Yes you do, which is that this game isn’t even out yet. But if you keep an eye on the SU&SD Twitter, we’ll be sure to let you know when it is. 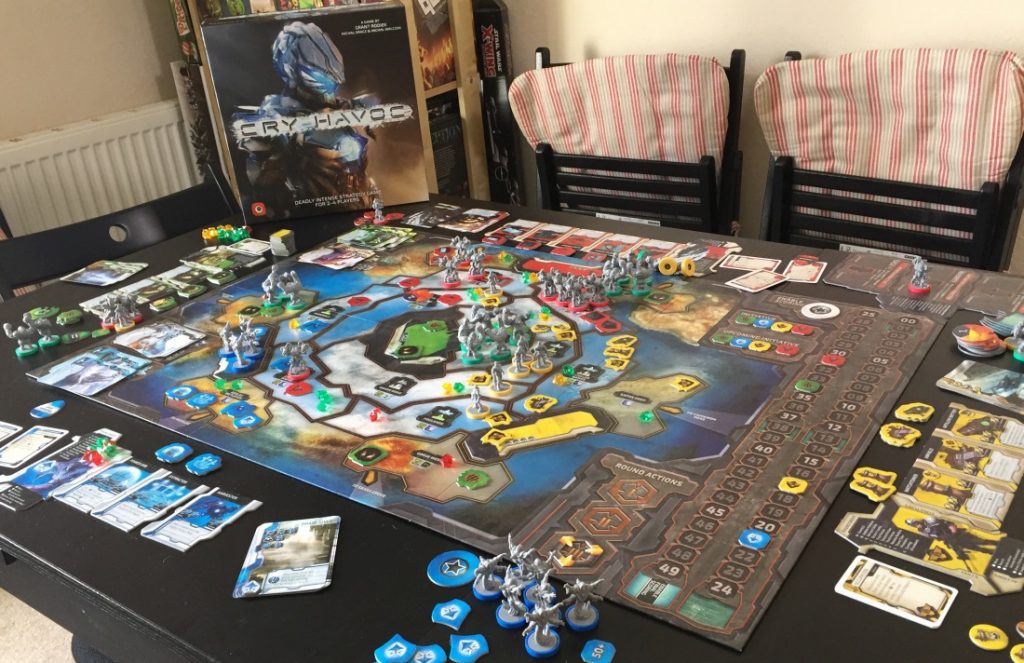