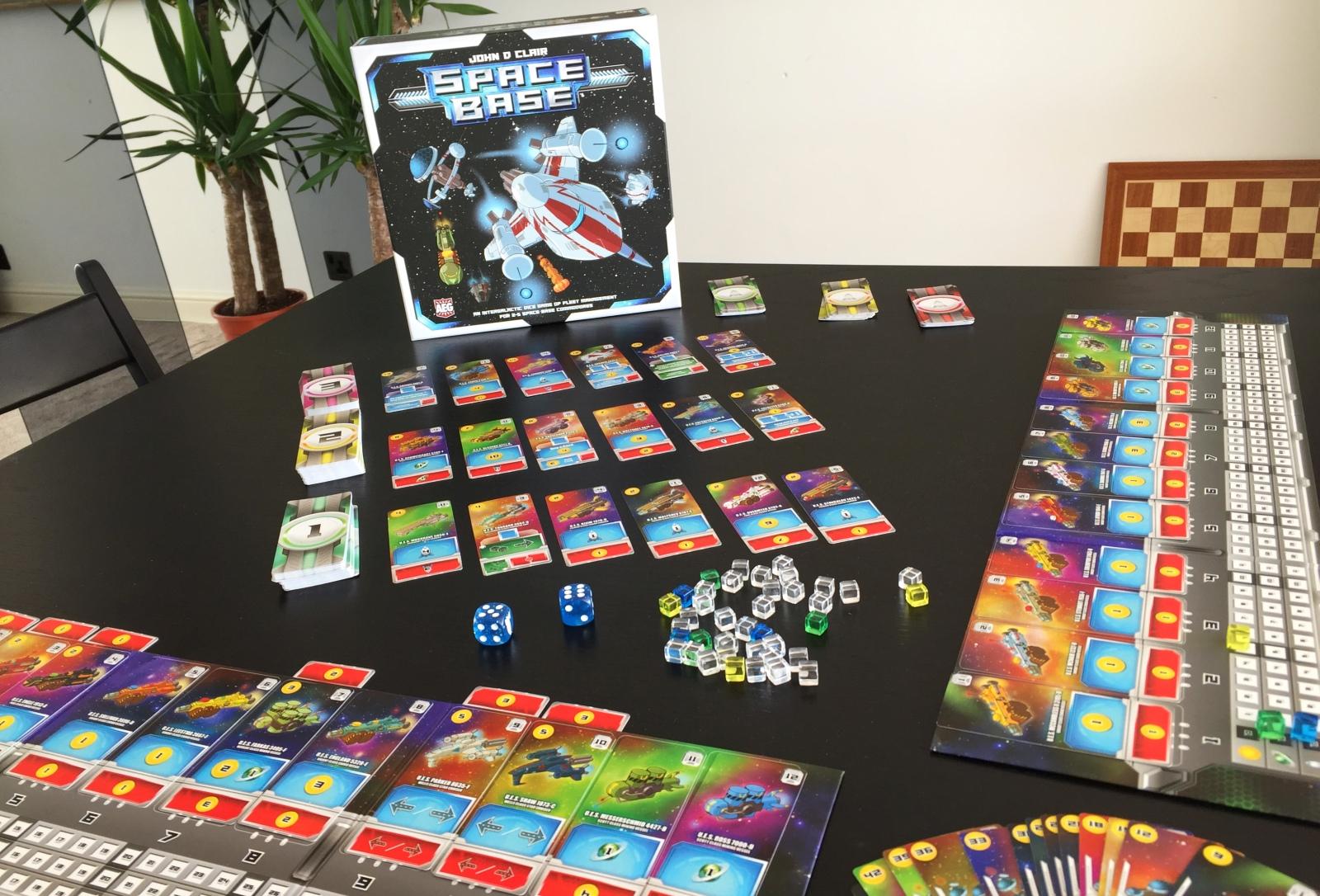 So, the winner of Space Base is whoever gets to 40 “Influence points” first, but you won’t need to worry about that for a while. Let’s take a look at your personal player board. 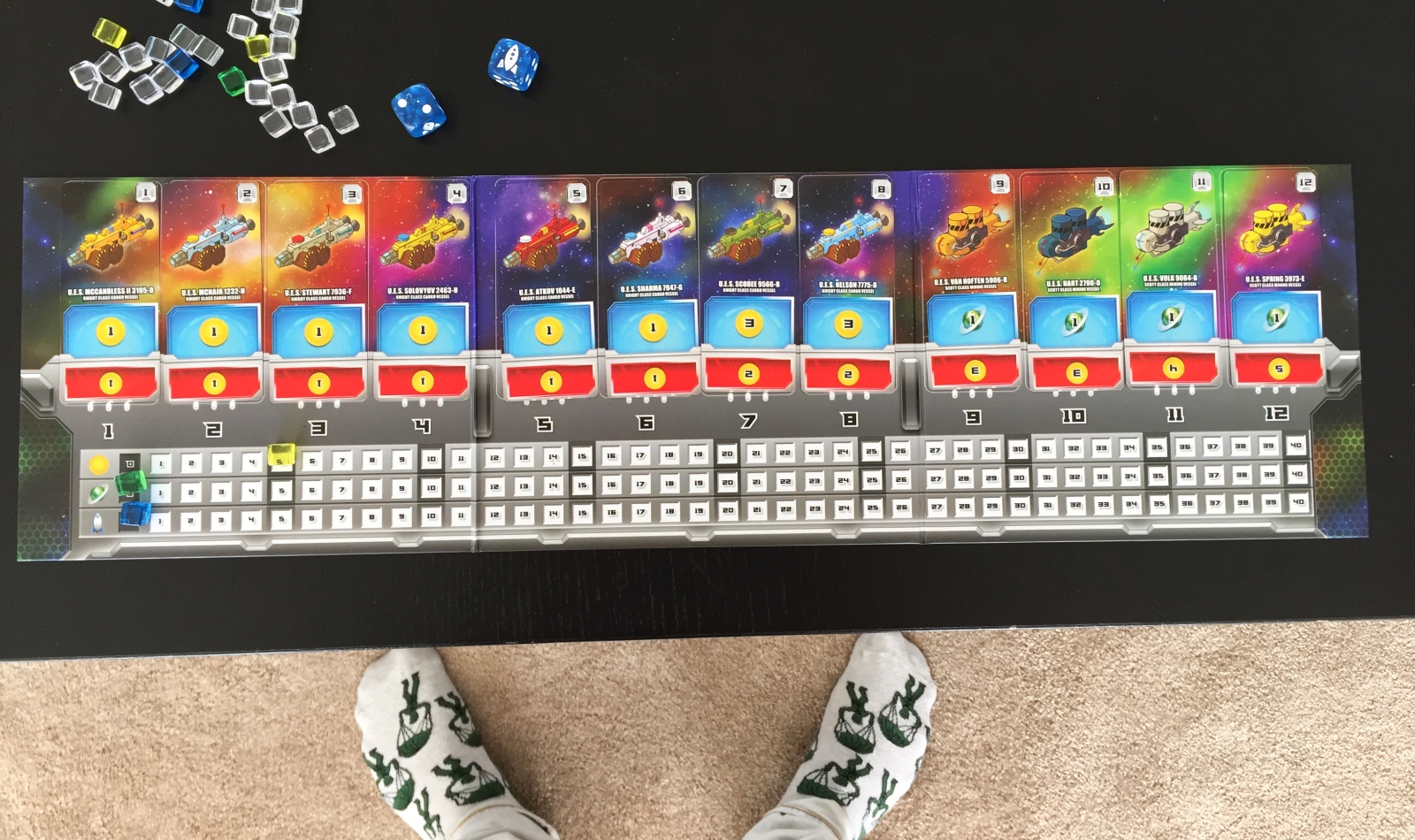 As you can see, it is very long. Let’s zoom in a bit. Nobody wants to see my socks, even though they have parachuting Army Men on them.

(They are my second favourite socks.) 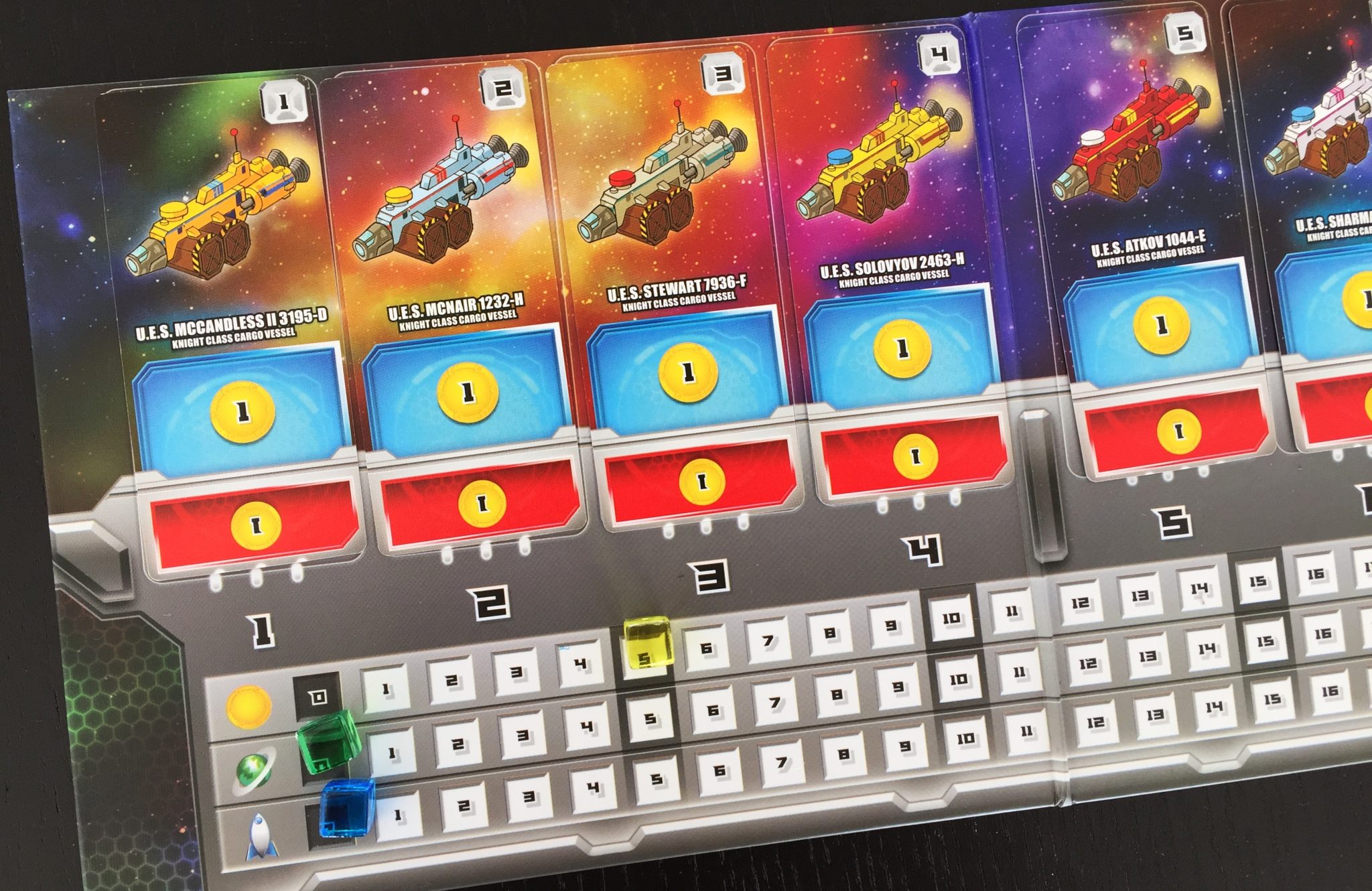 Your board has slots numbered one through twelve and a cute little ship card in each one. Each ship card you collect has a power displayed in its blue box, from the above cargo ships that say “Gain 1 credit”, to expensive ships with truly devious powers (one rare gunship simply reads “Win the game”).

On your turn you’re going to be rolling two sparkly dice. Let’s say you roll a 2 and a 5. Now, you have a choice. You could use those numbers to activate the ships in your 2 and 5 slots, OR you could add those dice together to activate the big ship in your 7 slot. Generally, the harder it is to roll that number, the sweeter the payday (the “Win the game” gunship demands you roll a double 6).

Finally, on your turn you can buy a new ship card from the ship shop in the middle of the table. You spend your money, and you grip that ship from the ship shop and swap it with the old ship in that ship slot, you slip out that old ship, flip it, and pop it under the spot.

(Boy am I glad I didn’t have to deliver that line in a video review.) 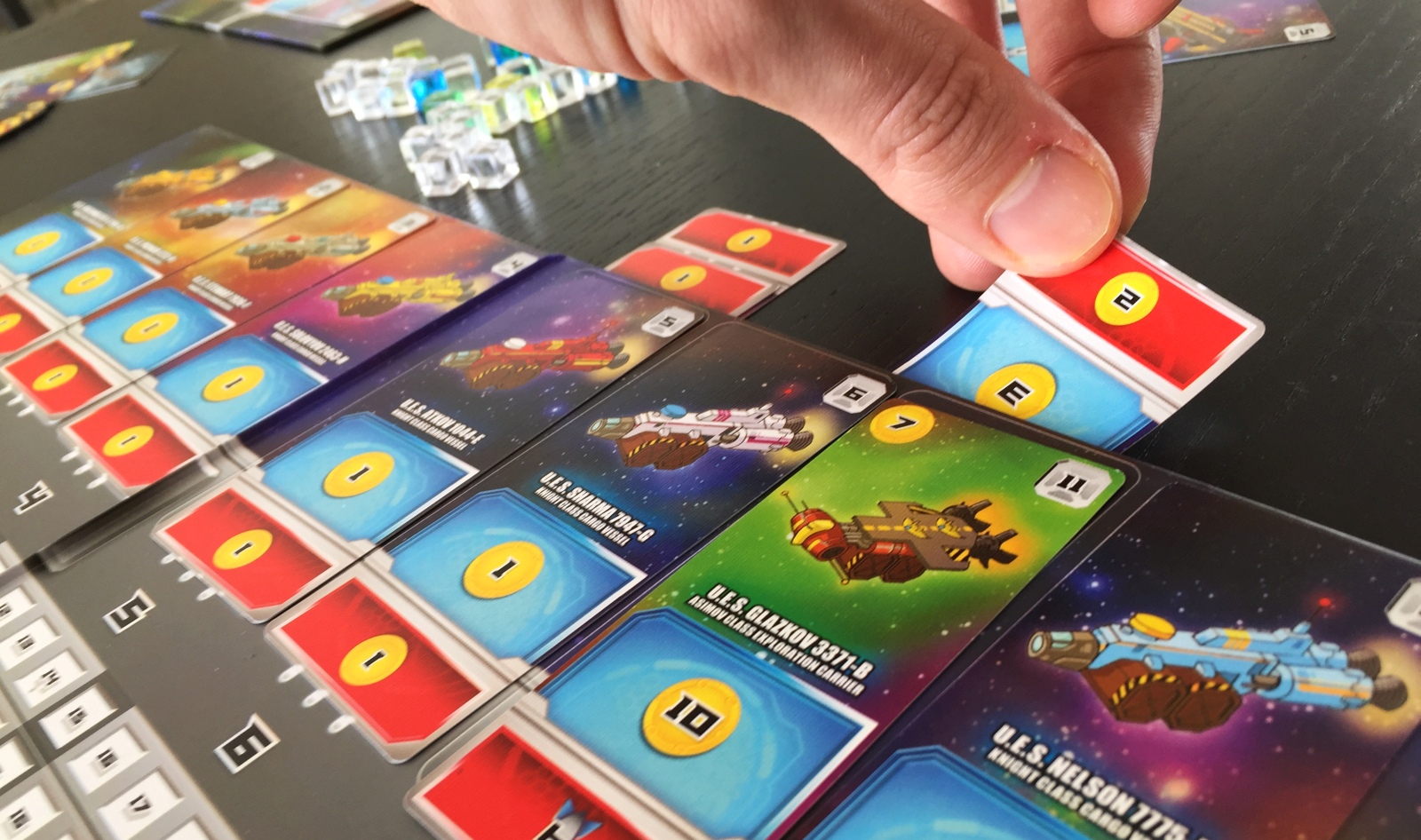 In other words, the new ship you bought sends the old one blasting off into the distance (so if you buy a “3” ship you dispatch your old ship in the “3” slot), and you’re then left looking at your old ships’ red boxes, as if you were looking out at a growing array of interplanetary brakelights.

Veteran board gamers in the audience might tuck their punchboard-calloused thumbs into their belts and say that this sounds just like Machi Koro, the little Japanese game of building a small town. And they’d be dead right- the foundation of Space Base is 100% Machi Koro, but Space Base is Machi Koro packed full of fun decisions, where the players are in control.

And I liked Machi Koro OK as mellow time-wasting game of building bakeries and swearing at two dice that steadfastly refuse to roll a 4, but – as I said before – I really like Space Base. 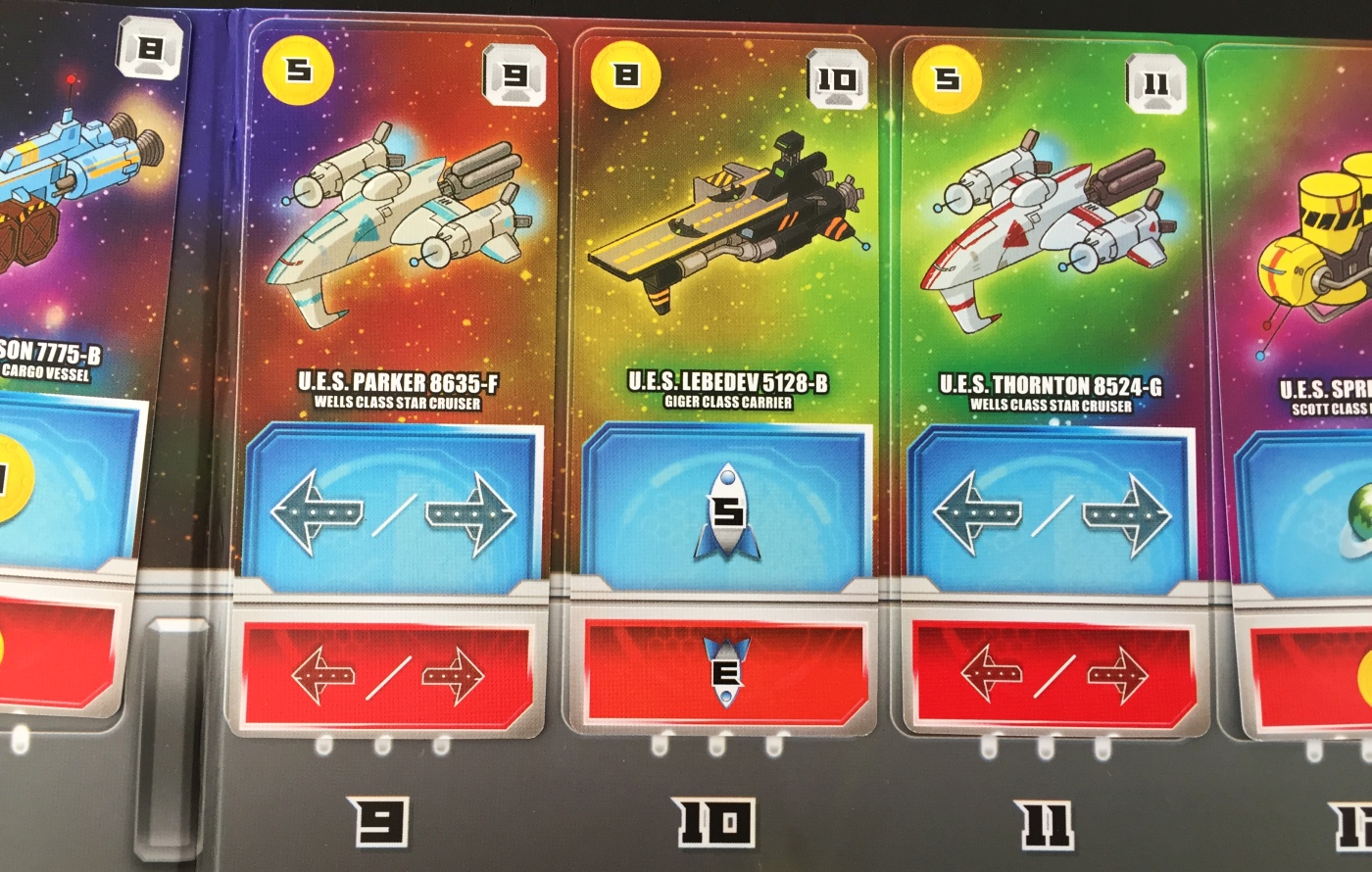 Part of that’s because Space Base is relentlessly generous. As a game that hinges on the gentle satisfaction of “Players will roll dice and get things”, you seem to get credits or influence or special abilities with every clatter of the dice. After 5 minutes, every player will be rewarded with every roll, it’s just a question of how much you all get.

This is a design that effortlessly barrel-rolls away from the single biggest problem a dice game can have: That players roll the dice, and are bored by the results. It’s why I never really liked King of Tokyo- sometimes I’d spend 5 minutes waiting for my turn to roll the dice, and I’d be disappointed by what I rolled. In Space Base, whenever you roll the dice, the decision space ahead of you expands like an open road.

Not only are there always 18 ships in the shop, there are 12 settlement cards (pictured below) that give you a one-time influx of Influence, bouncing you up towards the winning threshold of 40 points. The problem is, they permanently disable one of the numbered slots on your board. So when should you buy them? The only answer I can offer is “Before your greedy space-friends do.” 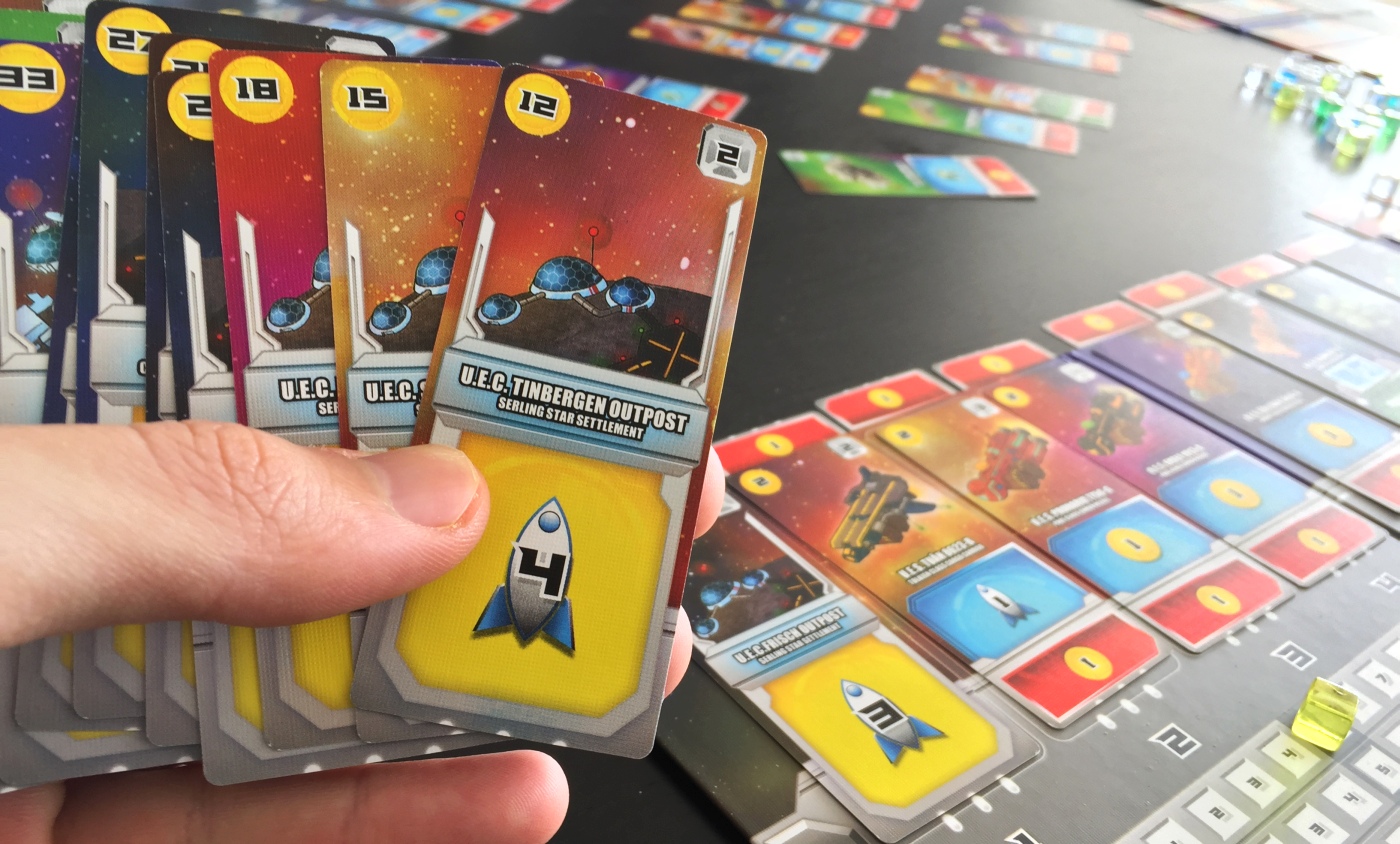 The buying of colonies is precisely the kind of tasty, chewy decision that Space Base is always offering up. This game is like a snack bar of small maths puzzles that – like real food – you’re going to have to solve with your gut.

If you have an amazing ship that offers a jackpot of credits when you roll a total of 11 on two dice, is it worth you buying a cheeky tug vessel which, if you fully charge it by rolling 7 twice, will let you swap the jackpot ship into the slot that means it triggers every time you roll a 5 on either dice? Or should you focus on cheap ships and fast cash? Or, or, should you forget cheddar entirely and start pivoting your engine towards victory points, racing to close the game out?

And I haven’t even mentioned the income track! I love this problem. So, lots of ships increase not credits or influence but a third resource called “income,” and if your credit total is ever lower than your income after you’ve bought a card, your credit total floats back up to your income total, like a dropped wallet buoyed to the surface of a bath.

Obviously that’s great, since it’s free money. But to what extent should you be using it? If you have 7 credits, is it worth buying a 7-cost ship that you don’t really need just so you can get as many free income credits as possible?

Again: I don’t know. But I had a lot of fun guessing. 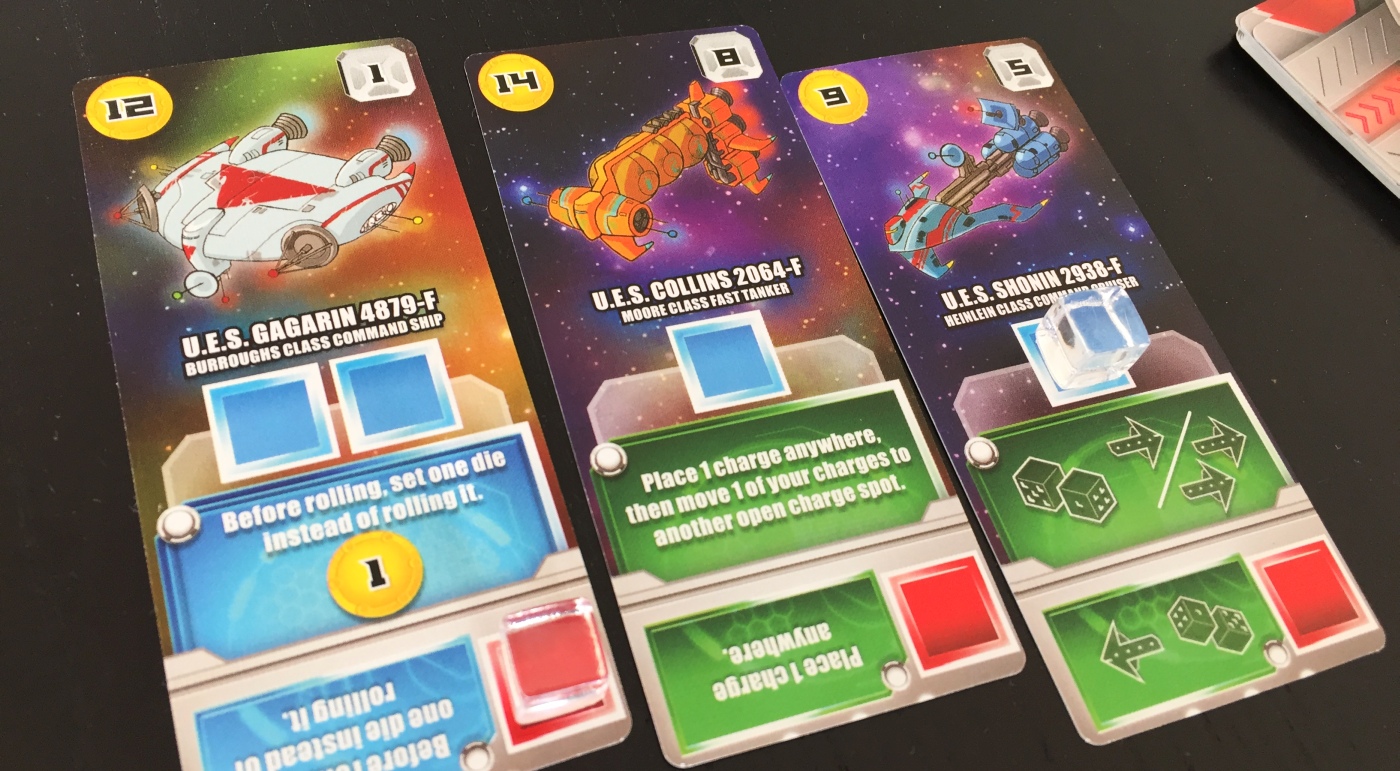 But while these decisions are unknowable, the result of all your thinking is crystal clear. The design of Space Base makes you feel like you’re an admirable admiral, a hot shooter, that you are intelligent and good at this. The fact that players can decide whether to accept each dice roll as a total or as two discrete results means those deviant combos you invented or that red-hot ship you saved up for? They’re paying off all the time, letting you feel rewarded, satisfied and smart.

And yet this game in no way feels like a stodgy puzzle. Instead, it’s defined by a constant clatter of slot machine payouts, and yet when you lose a game Space Base it doesn’t feel like it’s because your opponent rolled better. In all probability, they just built a better machine.

And yet I’m very aware that I’ve now said I “like” Space Base twice in this article, and each time I’ve been unable to type the phrase “I love it”. That’s down to a couple of small problems.

First off, it often ends up being too long. There are a lot of tricky decisions in the game, and that means individual player turns can drag on, and that means that with anything more than 2 players a game of Space Base can stretch to over an hour. That’s fine if you’re enjoying a tight race, but if a player gets a good start then you might feel that you’re lagging behind the pack for a tiresome 70 minutes. The other problem is that the manual’s unclear on all sorts of timing windows, which mean each time I’ve played Space Base I’ve found myself exhaustedly picking up the manual. Worse, it’s been a fruitless, frustrating search where the ruling I’m looking for isn’t written down.

But you know what? I don’t care! At a time when board games are getting more and more expensive, it’s a delight to find a small, pretty, £30 game that I’ll be putting in my collection as soon as I finish writing this review.

You know what I always do in combo-building games like this, or Dominion? I over-think. In Space Base, I end up building an engine where if I roll a 5, I can get a charge that lets me increase a roll, and if I roll a 6 I can nudge two spaces to the right, and if I combine THAT with the CHARGE then I can trigger the NINE, which lets me swap my TEN ship with the FOUR, which means now I can charge THAT ship, which means… which means I’ve been faffing around while my friend has won the game.

So today, I’m not gonna overthink my games criticism. Space Base is a game where you can roll dice, collect a spread of cards that feel great under your fingers, and feel satisfied with your efforts. It’s a wonderful achievement from designer John D. Clair. I think he should be really happy with it, and if you buy it, I think you might be too. 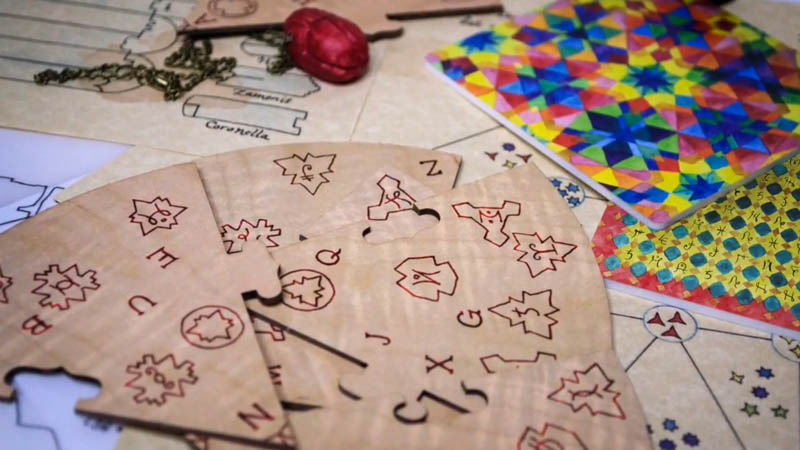