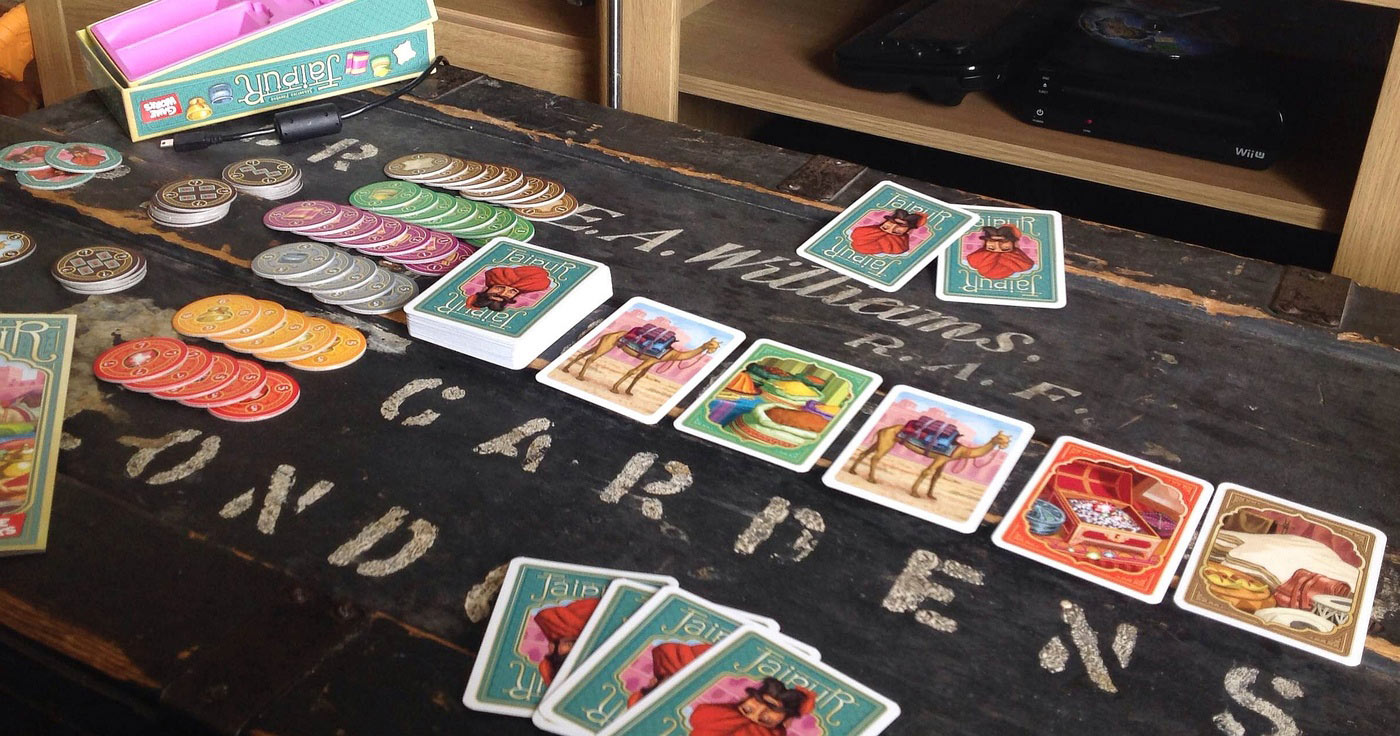 Brendan: Quinns? QUINNNNS. Where is he? He’s always late. Once again I have five crates of the finest Indian silks sitting in front of me, ready to buy — ready for transport! — and once again I can’t do anything with them because Quinns is late. He’s the one with all the camels! He should know by now to be ready! Where could he be?

Brendan: Just tell me you have the camels.

Quinns: Oh no, I traded those camels in ages ago. But don’t worry because – look! We have all these leather rags now.

Brendan: Hang on. Since when do you and I work as merchants in India, perched atop teetering camels, our saddlebags overflowing with rubies and saffron? I mostly remember us uploading penis jokes to the internet.

Quinns: This is a written review of Jaipur, Brendan! Anything is possible!

Brendan: Anything? But then…

Quinns: Jaipur is a trading card game, but not a trading card game. No. It’s a card game of trading. It’s also a wholly excellent game. While small-box card games are everywhere these days, this one broke through my grump-shield before I’d even opened the manual by being gorgeous. It had you commenting on the inlay! I was years into my board game collecting-days before I started caring about inlays. They’re always so alien, yet so useless. Like crop circles. 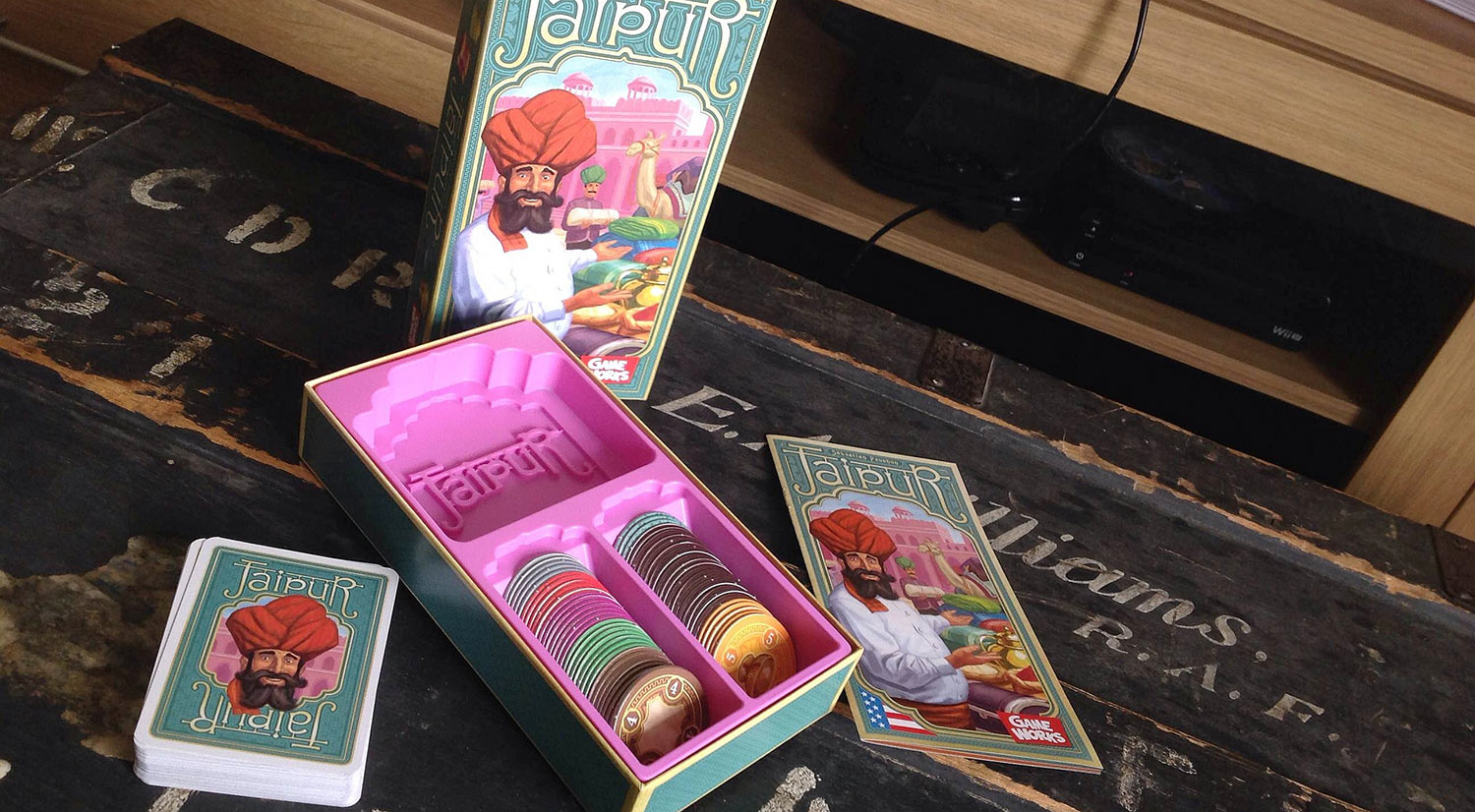 Brendan: Yes, but this inlay has the game’s name carved into it, in beautiful writing, like a sculptor’s signature. And any sculptor would be proud of something so elegant. Jaipur has dozens of little cardboard coins laid out like neat rolls of quarters in the box. As soon as you see them, you instantly want to know how to earn them.

Quinns: Yes, and then you learn how to earn them from Jaipur’s manual of fantastic clarity, and then you instantly want to start playing. It’s a flawless takeoff for a board game. I can imagine the headset-wearing control team standing up and cheering from the room in NASA with the big screen.

The game of Jaipur centres around a “market” deck, with cards depicting leather, silk, spices, silver, gold, rubies and camels. Five of these cards are laid out between the two players, like an expensive battleground. On your turn you EITHER attack this market, snatching up cards in an effort to make sets, OR you cash in a set. Sell two leathers, and you can claim the top two “leather” coins.

Bide your time, though, and sell three, four, or even five leathers, and as part of your deal you also earn one of the bonus coins that comes from selling a fat set.

Brendan: I wish I had bags full of jewels. I could use them to buy my way out of indentured servitude to Shut Up and Sit Down.

Quinns: But Brendan, remember what I said about written reviews…?

Brendan: Of course! Why, it looks like I do have a bag of jewels. And a helicopter!

Quinns: No, look, the helicopter has crashed.

Quinns: Yes, there it goes. It has crashed into all your jewels. I’m so sorry. 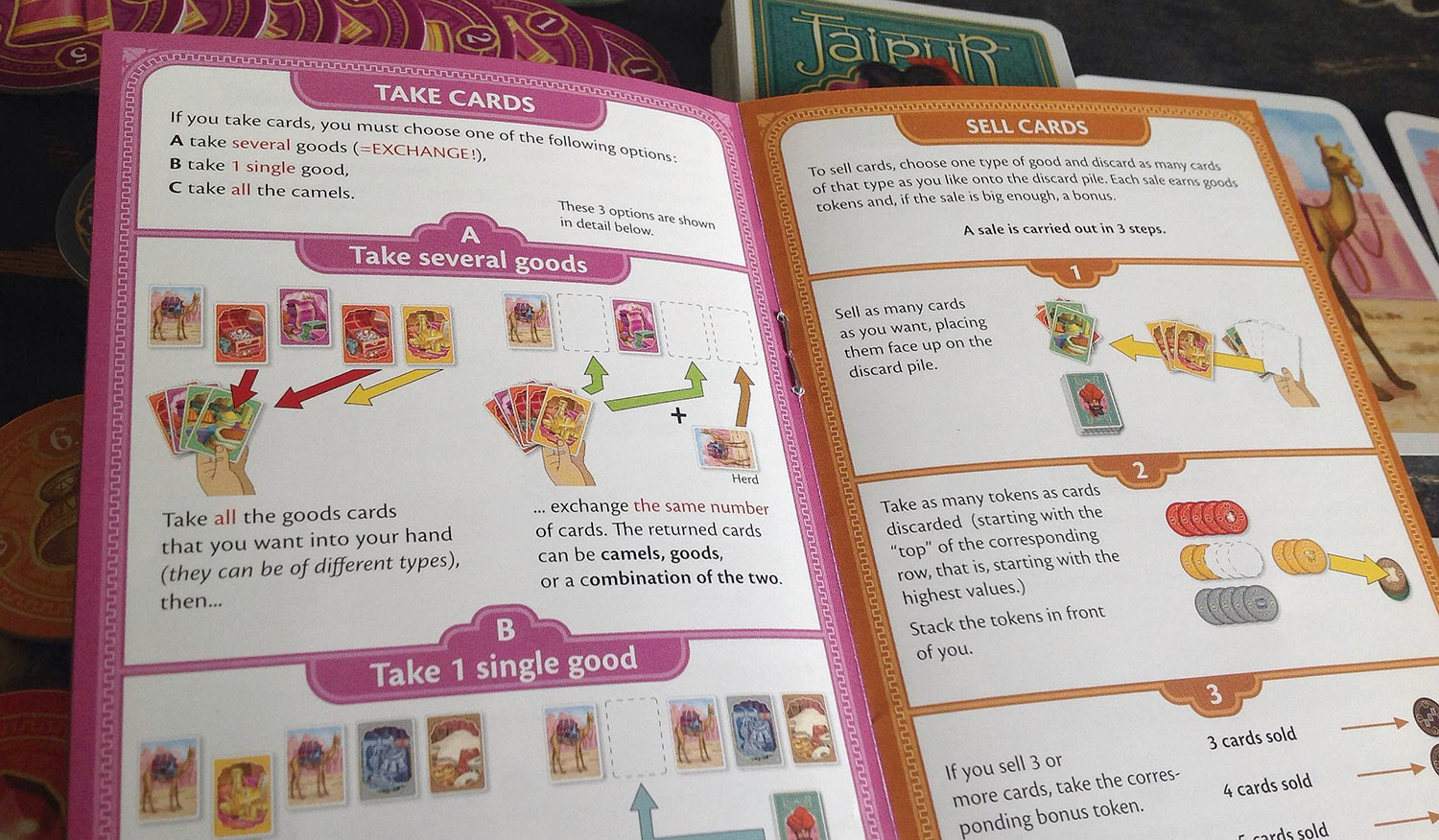 Anyway, there’s two aspects to playing Jaipur, two sides to its well-fingered coin. The first is how you remove cards from the market. Let me get my bullet points out. When taking cards you can either…

It’s a lovely puzzle, one that’s always rewarding, frustrating, and exciting. Then we’ve got the other side to Jaipur, which is actually even MORE rewarding, more frustrating, and more exciting. You see, those sloping stacks of coins are all worth more at the top than the bottom. Which means, when you’re collecting a huge set of leather, and your opponent skims the cream off the market by cashing in just two of them, your natural instinct will be to wait for them to leave the room and then spit in their coat.

Brendan: I think my favourite thing about Jaipur is how people’s personality tends to affect how they play. That’s true of every game but it is particularly noticeable in something as immediate as Jaipur. For instance, Quinns, you always play for high amounts of points because you’re naturally ambitious.

Quinns: That’s true. I once murdered someone to take their place as —

Brendan: Ahh! Ahh! Let’s not talk about that. Anyway, your ambition would always see you holding back small amounts of expensive items — two cards of rubies, or silver — because you were gambling on picking up the third. 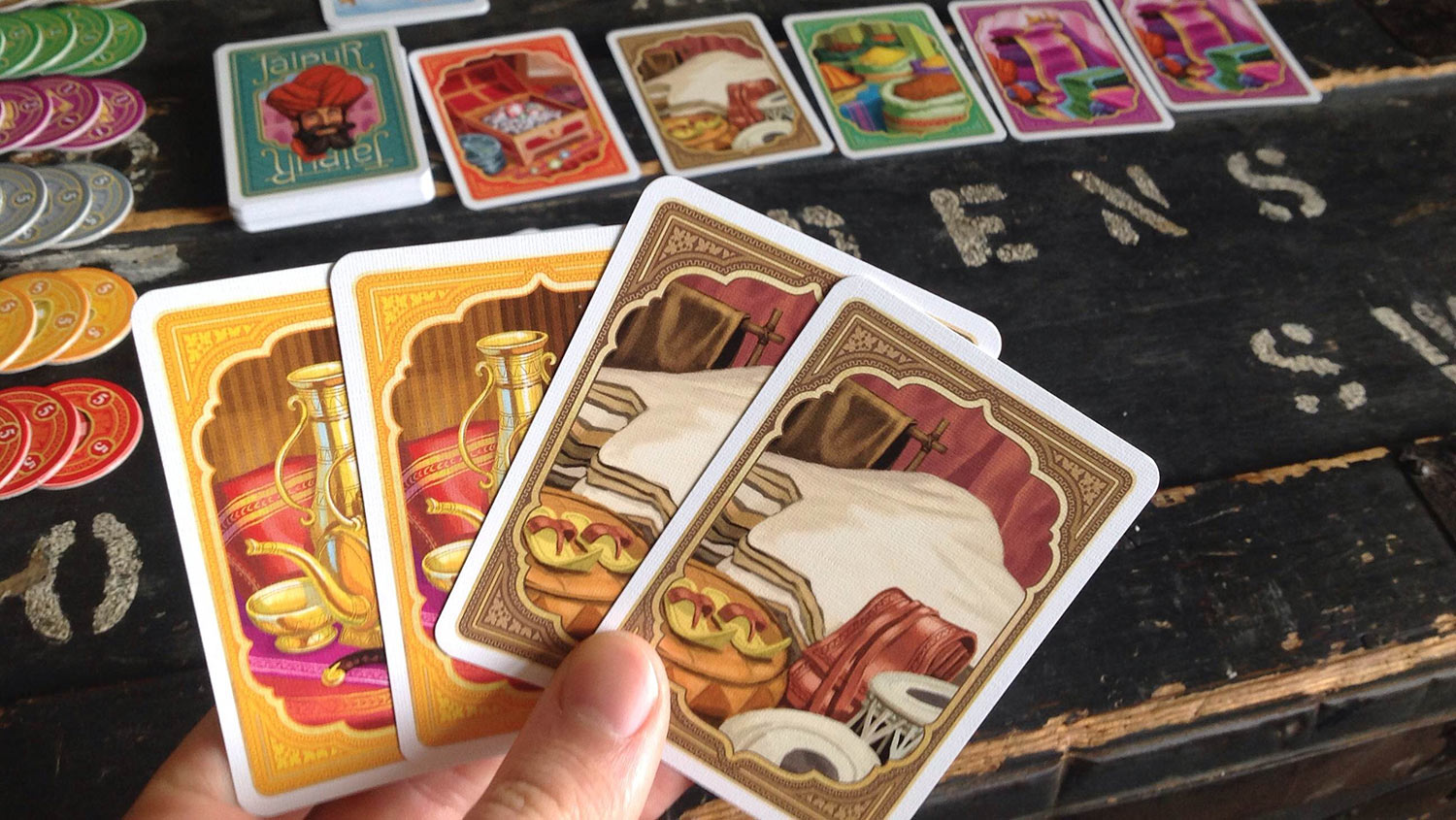 Quinns: The third card is important! I need it to get that disc of sweet extra points!

Brendan: And when you get the third card?

Quinns: Well, I suppose now that I have the third card… it would be… it would just be a shame to cash them in now when I can get a FOURTH card. Then I would get an even sweeter Extra Points disc!

Brendan: You see that? That is called Greed. And it is your downfall. Because I have just cashed in my two cards of rubies to skim the top items off the market. So long as I got a sense of when you were holding back for certain items, I could swoop in and get the choicest goods from every stall. True, I get fewer of them. But it sets you back. GREED.

Quinns: I am pretty awful. But it’s so fun being hoisted by my own avaricious petard!

Brendan: Whereas I am terrible at forward planning. So I tended to underestimate the value of a strong camel herd. You would constantly corral all the camels off the market turn after turn, leaving my pens empty. Camels are basically a universal commodity that can be swapped for anything, so you quickly realise that having none of these stinking, spitting animals is a huge disadvantage. Especially when the market conspires to produce a ton of gold or luscious silks.

Quinns: Oh yeah! That was the only round where I beat you. I knew you were hungry for camels, so I only ever dispatched two of my snarling herd to the market at a time, leaving you with a terrible choice. Take a card for free, or take a paltry two camels and open up the market for me.

Brendan: The worst dilemma in the game is certainly being presented with five camels. You look at them and think: “Gracious, they could all certainly be useful.” But at the same time, you know the market is going to be flooded with new things as soon as you hoover up the animals. This is when your brain feverishly tries to recollect what cards are in play. When was the last time gold came out? Are there any rubies left in the deck? Ahhhhh! 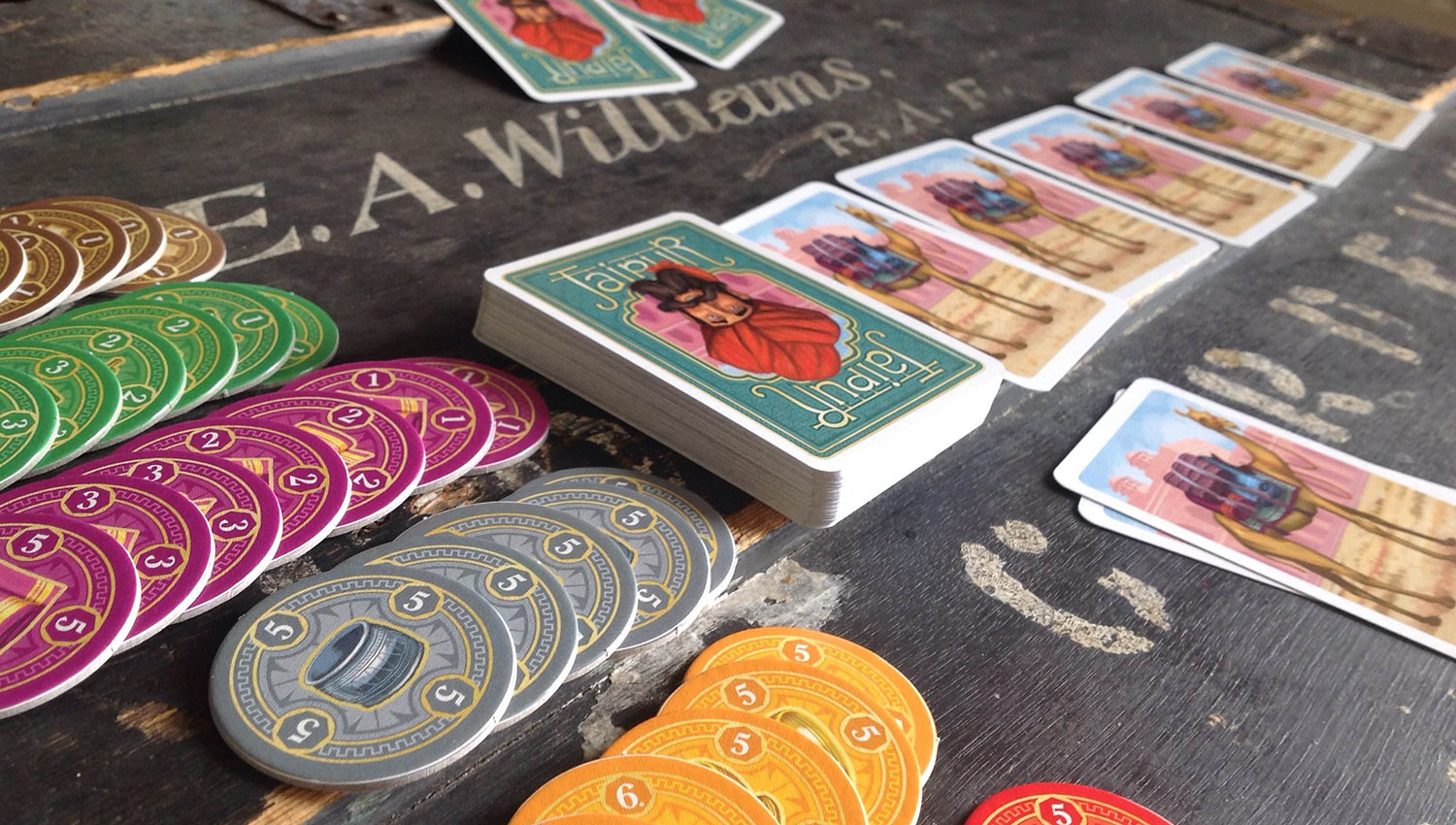 Quinns: Ahh, yes! I’d forgotten about how you can guesstimate what cards will spill out from the deck based on what you’ve seen. Which is hugely important, because if your opponent sells, for example, five spice cards, you know collecting your own set’s going to see be an uphill battle.

It’s amazing how flexible Jaipur is. Some people are going to buy it and think of it as that carefree set-collecting game on their shelf that they’ll play on lazy Sundays. But if people want to take it seriously and invest a ton of brainpower into it, it’ll hold up.

I’ve got to say, we’ve reviewed a lot of great economic card games on SU&SD. Splendour, Machi Koro, Mundus Novus. And they’re all nice! They’re so nice. But Jaipur is the first one that I think I can say I love. Only partially because of those others games’ inflexibility- Splendour will always be tough, Machi Koro’s always silly, Mundus Novus is the definitive breezy card game.

Jaipur? It’s just good. It’s so good. It’s as if it tucks you and your opponent into the same pair of trousers. You’re in such tight proximity that every single move you make will either excite your friend or have them screaming at you.

Brendan: That’s disgusting. But yes, I see what you mean. I’m not one for games that involve a lot of itty-bitty arithmetic but Jaipur never really feels like that. It feels more like a traditional card game, like Rummy or something, in that your opponent’s move will always have a huge effect on what you are trying to accomplish with your own hand. The ‘luck of the draw’ feeling of trad card games is also there, and the old adage of what you do with your luck. I think that makes it not only a great game for seasoned vets but also something you could easily introduce to people who don’t play a lot. Folks who would frown at something heavier. 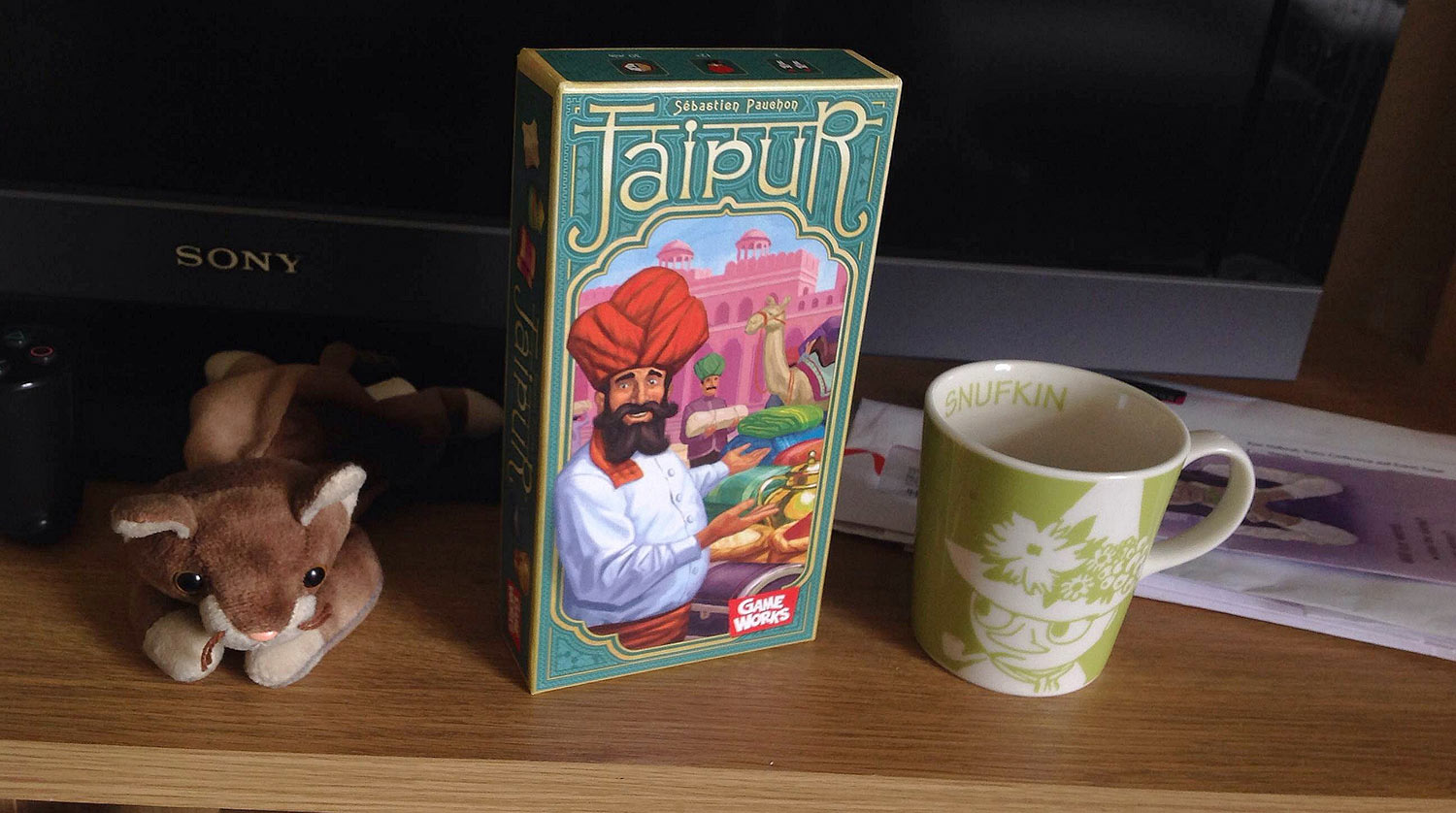 Quinns: Alright, our convoy has arrived! Time to sell all this leather!

Brendan: Wow! Excellent! How much money did we make?

Quinns: Well, that’s the thing. You aren’t part of the deal. In fact, you’re in prison. 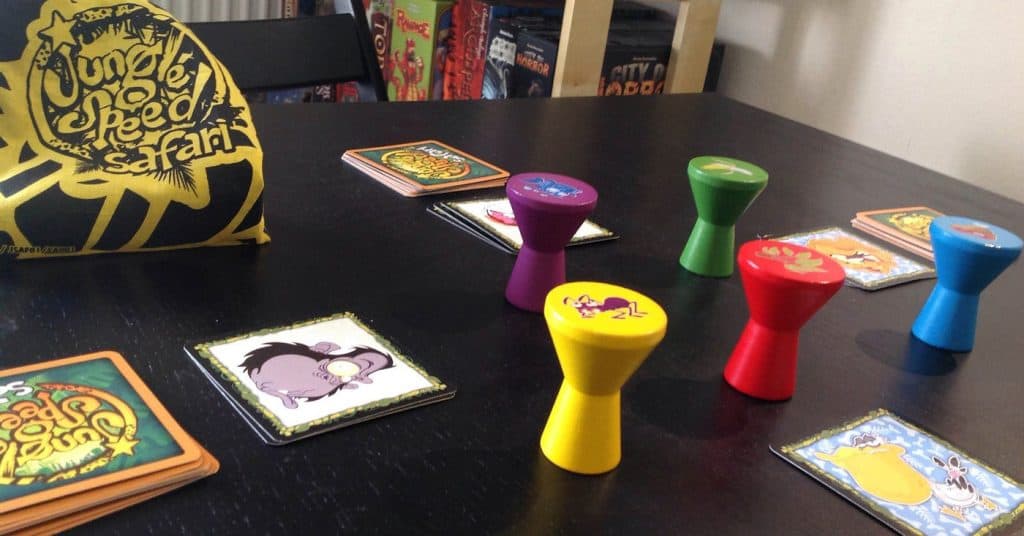