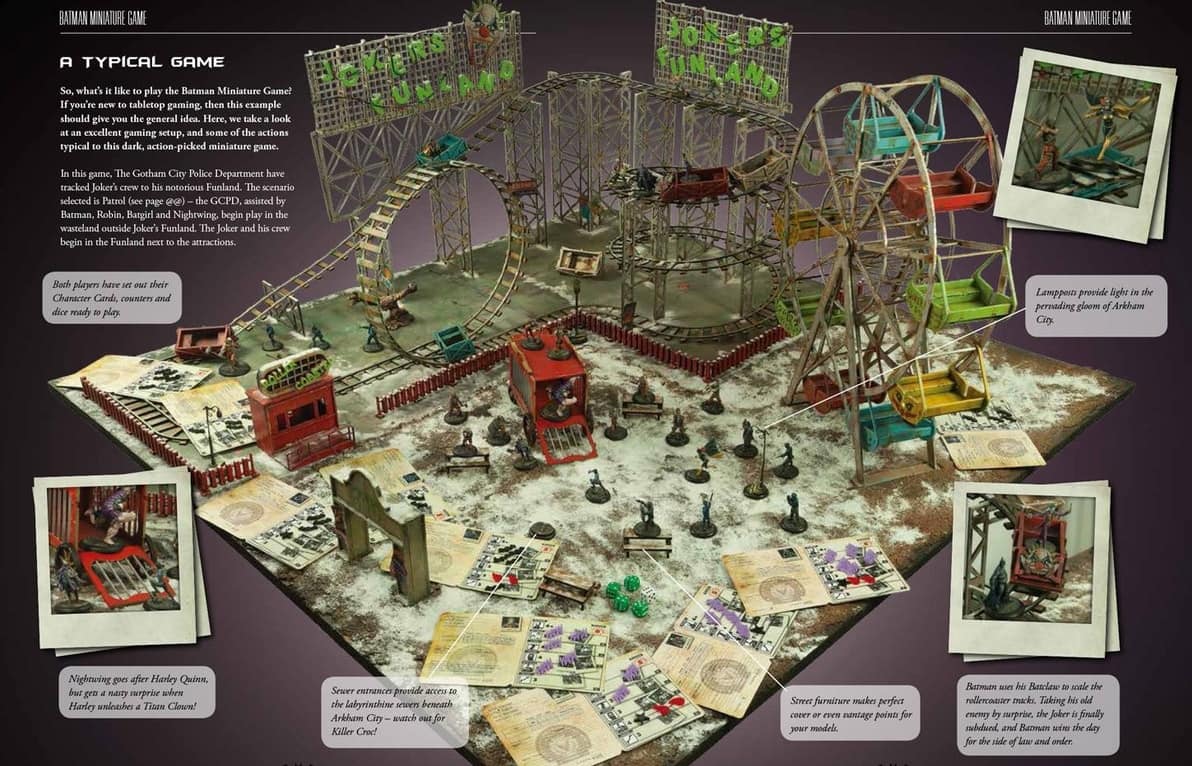 [Today we end our fascinating tour of 2015’s best and brightest miniatures games! If you missed Eric Tonjes’ previous, excellent reviews, do check out Infinity, Warmahordes, Dropzone Commander and Malifaux! And don’t worry. We’ll be bringing Eric back for any future miniatures reviews.]

Do I have your interest? Eric here, and today we are finishing up our survey of some major miniatures games on the market. It’s been a fun trip, and I’ll still stick my head in occasionally, but I wanted to finish things off with a personal pick that, while perhaps not as popular as some of the big boys, is a newer offering that has something unique to present those interested in miniatures games.

That being, of course, Batman.

The Batman Miniatures Game by Knight Models (the only site it has is an official forum, astonishingly) is a small skirmish game which seeks to lovingly translate the universe of street level DC comics heroes and villains to the tabletop. You will form a gang of 4-10 miniatures and fight to both take out enemy models and score objectives. And you get to do this with Batman, the Joker, and dozens of other iconic characters.

Of course, your interest in the BMG (because acronyms are fun) is going to be directly tied to your attachment to this intellectual property. Knight Models are deeply invested in the Batman mythos. This is a game where you don’t just get to play Batman, but can choose from any number of his incarnations – his movie and video game realizations, Frank Miller’s aging Dark Knight Returns version, even the goofy Adam West television incarnation that will make you yell “Zowie!”. You can take Tim Drake or Damien Wayne Robins (or both), or field the Watchmen or Green Arrow. You can bring to the table villains from the classic (Joker, the Penguin) to the new or obscure (the Court of Owls, Hush).

Indeed, the BMG is an invitation to revel in the massive, dark world of Gotham City. Obviously this isn’t for everyone. However, it does mean this game has appeal well beyond the usual miniatures market. All miniatures games involve world-building; one of the strengths of the genre is that it turns you loose in a playground of storytelling. However, most games create this playground out of whole cloth. You might fall in love with the latin-named factions of the grimdark future, the neo-victorian boomtown on the far side of the Breach, or the futuristic antics of Zoe and Pi-Well, but you have a massive learning curve to get there. What the BMG offers is a world millions already know and love in miniature format. And sometimes other worlds, too! 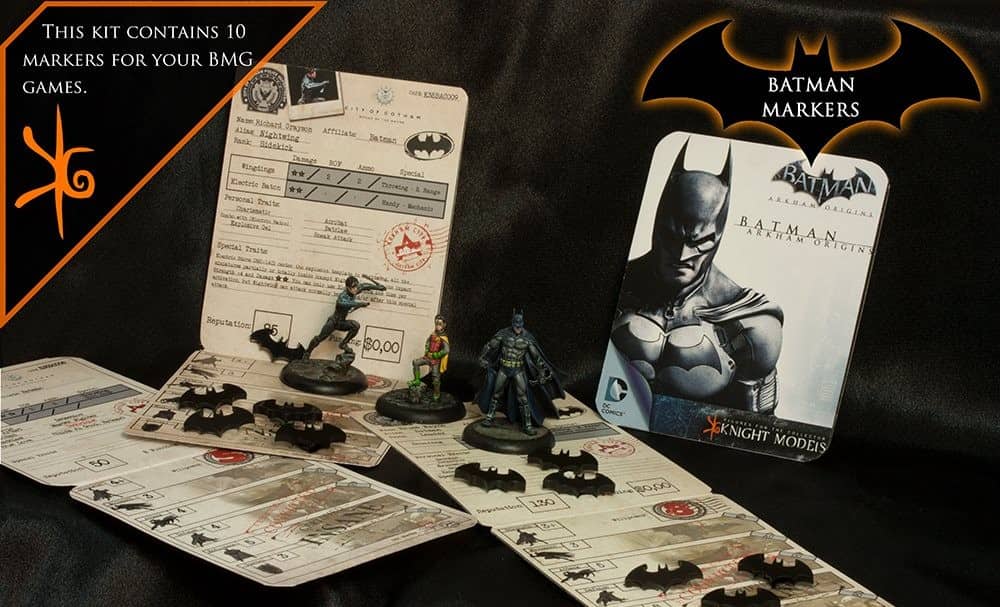 While we’re mentioning those miniatures, two things should be mentioned. One, they are gorgeous. Really, really gorgeous. Every one of them looks like it came right out of the comics or video games, and they are delightful to paint. That said, these are some of the most expensive minis to buy on a per-pewter-head basis. This is largely a product of licensing fees, but it can be frustrating. Happily, you need few enough models to construct a gang that you can still keep things relatively affordable; a playable gangs cost about the same as a big box board game.

Alright, you might rightfully ask, but how does it play? After all, while it might be changing, there sometimes seems to be an inversely proportional relationship between the quality of a game and the appeal of it’s IP. Fortunately, Knight Models has crafted a surprisingly good game in the BMG. Let’s talk about a couple things that set it apart.

The first is it’s unique (to my knowledge) turn structure. On the one hand, the BMG uses the alternate model activations found in a game like Malifaux – you move and attack with a model, then your opponent does the same. This keeps things engaging and fluid. Overlaid on this, however, is a preparatory phase where you plan out what you will do, assigning Willpower points to your models’ various abilities (Attack, Movement, Defense, and Special powers). Two things are key here – you are making these decisions with a pool of resources never big enough to do everything, and you are often making them before you know how the turn will fall out. 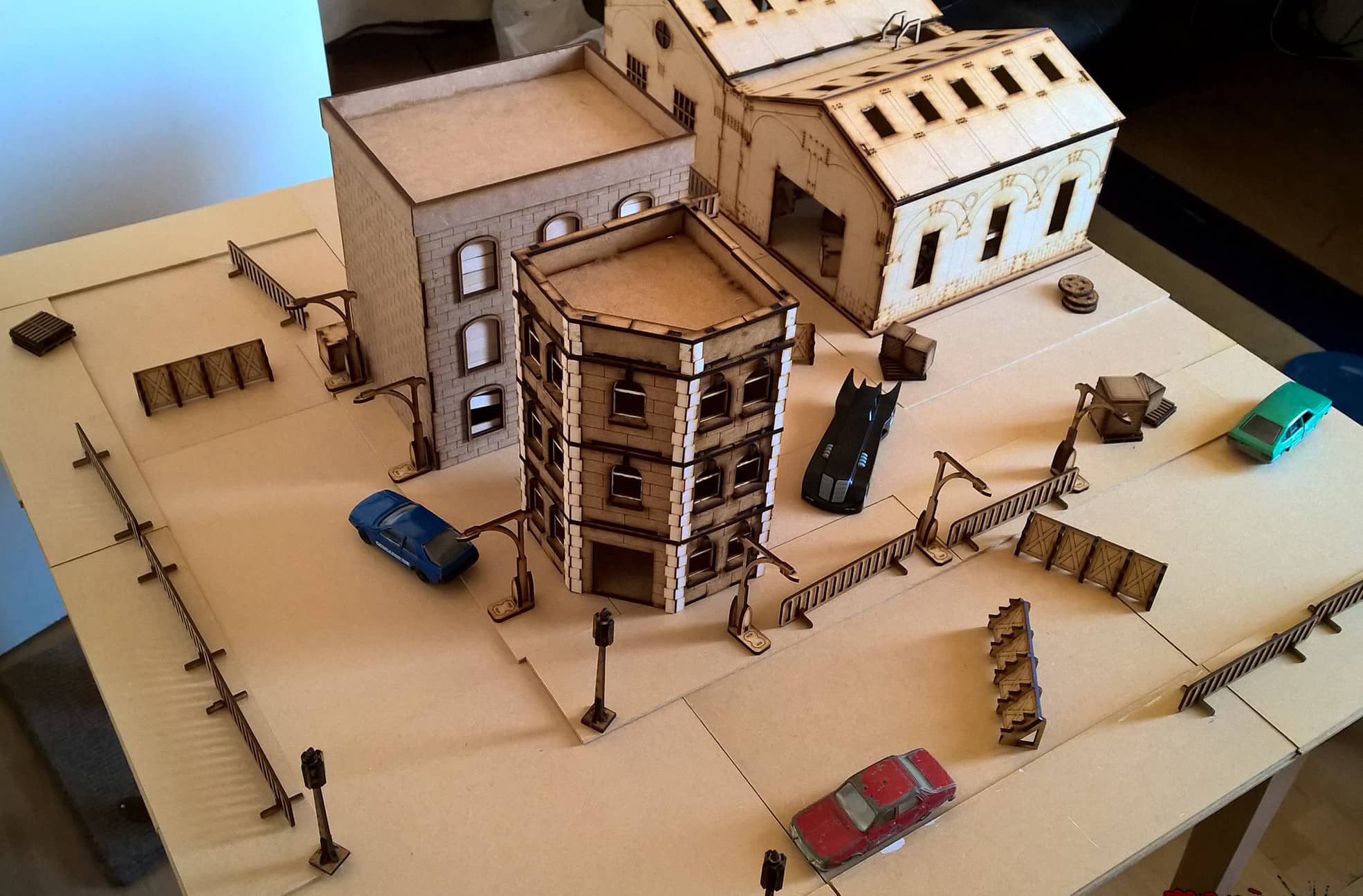 This structure makes the BMG a fantastic blend of planning and adaptation. If traditional turns create a game about strategy and complicated plans and alternating activations creates something tactical and reactive, combining them this way means you have to both look at the big picture and stay ready for everything to fall apart because your opponent does something unexpected. It also lends a delightful layer of bluffing, anticipation, and posturing. You might, for example, pile points into Attack and give your opponent a wolfish, “come at me” smile.

Alternately, you could stare at that wounded model and wonder whether you can afford to give them the ability to do thing or just pump Defense to survive another turn.

Within this turn structure the game uses the usual miniatures measuring and dice-rolling conventions. Things do get a bit fiddly here – the way critical hits work, for example, is a bit odd, and shooting gets rather complex. Yet the rules for guns, while perhaps overcomplicated, are also brilliantly adapted to the narrative of a typical comic book. The games are always played at night, so range is limited not by artificially short stats but visibility. This also means the streetlights each player gets to place at the start of the game are significant, since their pools of illumination can become killing fields. 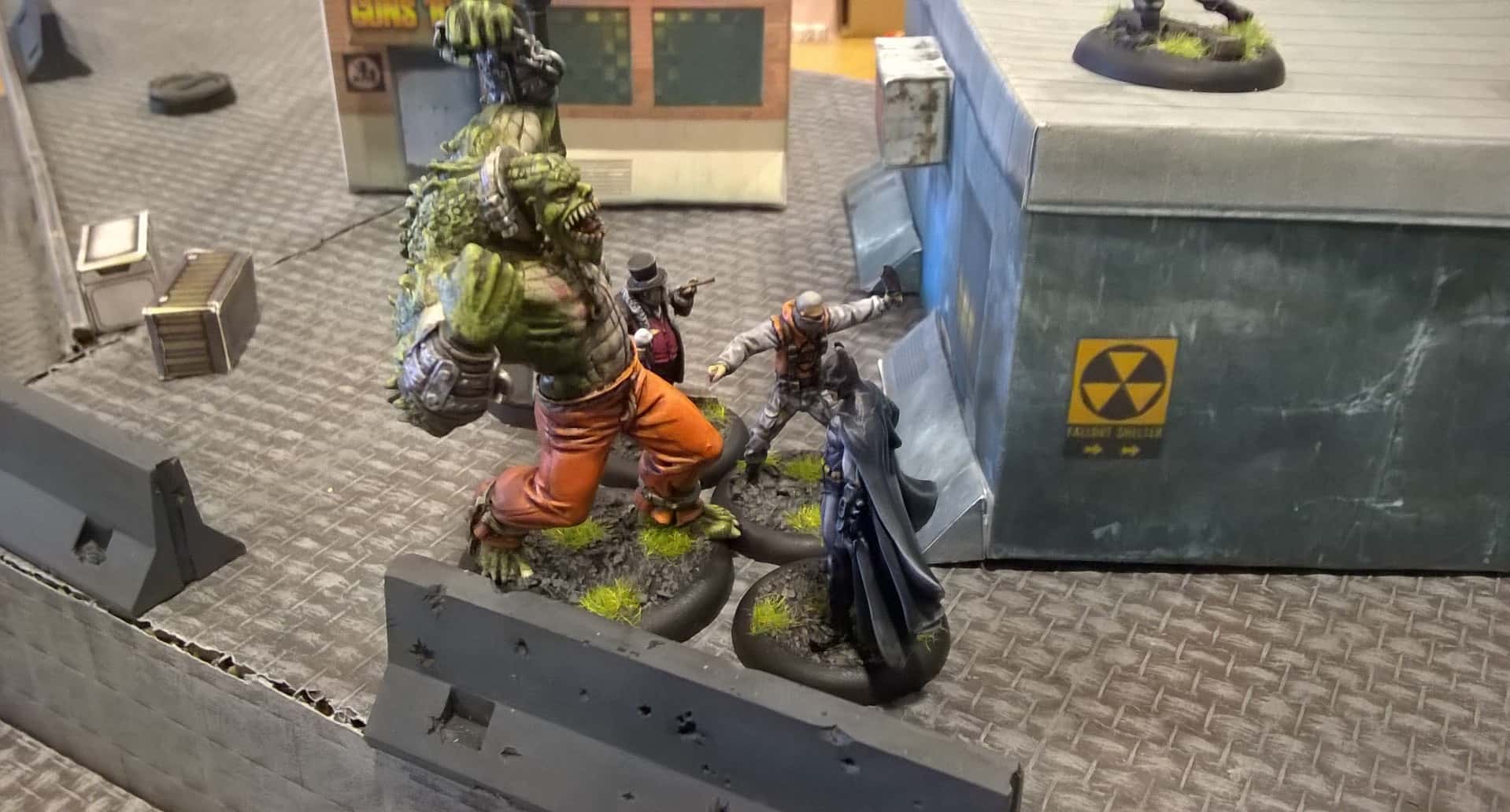 Honestly, a game like this is made in those details, and this is where Knight Models kills it. Batarangs, for example, let the Caped Crusader and his allies zip in and out of battle from nearby rooftops exactly like those stealth sequences from the Arkham series of video games. Villains also feel right – the Joker is completely unpredictable and drags you down with crazed minions and debuffs, while Bane lumbers around the table crushing things that foolishly get within reach.

That said, one of my two significant reservations comes with these special rules. While they are flavorful and occasionally brilliant, the BMG commits the grievous sin of giving many of them generic-sounding names and then only listing them on cards, forcing you to look in the rulebook to remember the difference between “Resilient,” “Tough Skin,” “Sturdy” and “Insensitive.” This last one, by the way, is about feeling pain, not being the person who tries to solve deep emotional problems with a joke and a slap on the back. 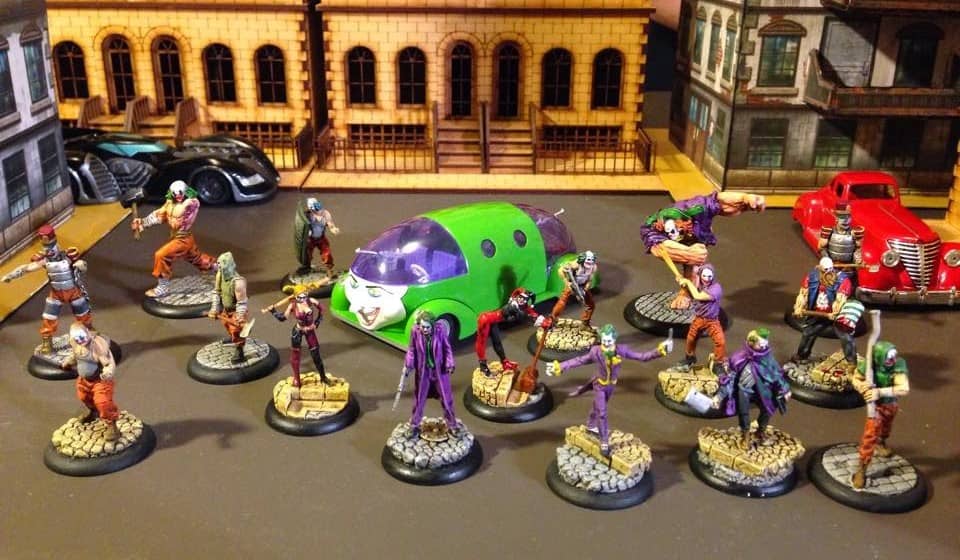 The scenario design for the BMG is also clever. There are a set of scenarios which determine the basics of setup and deployment, but each player chooses specific objectives like loot or ammo crates to score points. Then they have a pool of Strategy points which can be used to alter almost everything about these scenarios and objectives. This means that scenarios both tell dynamic stories but also are tailored to your specific gang, allowing you to play to your strengths rather than just bemoan your weaknesses.

I did mention two reservations, and the second ties in with the complexity of these rules. Complexity itself isn’t a dealbreaker, especially if it is clearly explained. Sadly, in the BMG it sometimes isn’t. Some of this is an issue of translation. There are free rules online for the game, but the English is really bad. At points, we’re talking comedy-sketch-about-bad-translations bad. A new version of the rulebook was recently released in hard copy which is a lot better, but even here the translation loses some clarity. That or it wasn’t there to begin with. If you’re like me, you’ll probably have to reread sections several times to get your head around what they’re describing. Fortunately there is a strong online community that provides better translations and explanations of the rules, but it is a frustrating problem nonetheless. 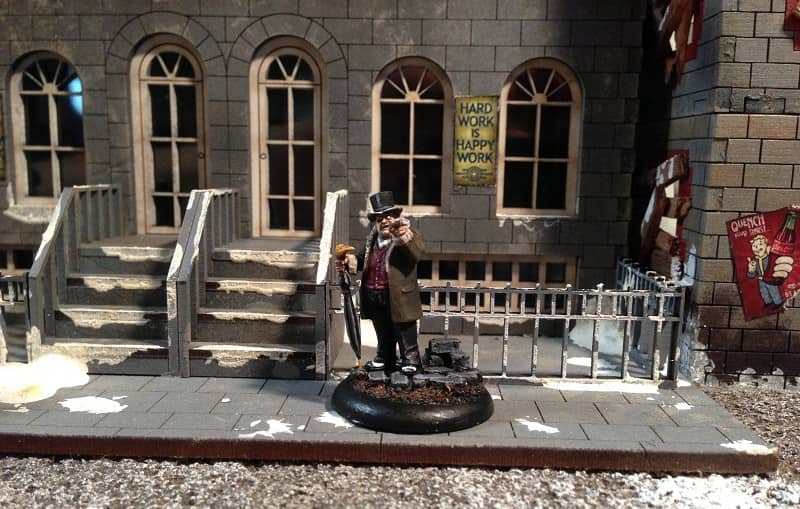 That said, do I think it’s worth wading through these issues? It depends. I actually went into the BMG pretty skeptical after trying to read the free rulebook, but it was just too fun for me to stay suspicious. Building gangs and painting characters has made me excited about the setting all over again – I’ve actually started reading the New 52 Batman comics because of this game, something no game has accomplished since those awkward teenage years reading Warhammer 40k novels. The actual gameplay is cinematic and exciting, and it feels exactly like the world it represents. Just the other night, for example, Batman was hacking his way through a jungle of plants to rescue Robin from being hypnotized by Poison Ivy, only to watch in horror as Harley Quinn smashed Nightwing into a car and Killer Croc then leapt out of a sewer and knocked him out.

In many ways, I suppose that last sentence is both a testimony to and litmus test of the Batman Miniatures Game. If that doesn’t get you excited, then it might not be for you. If, however, you could picture that happening across the panels of a comic book spread, then you really should give it a try.