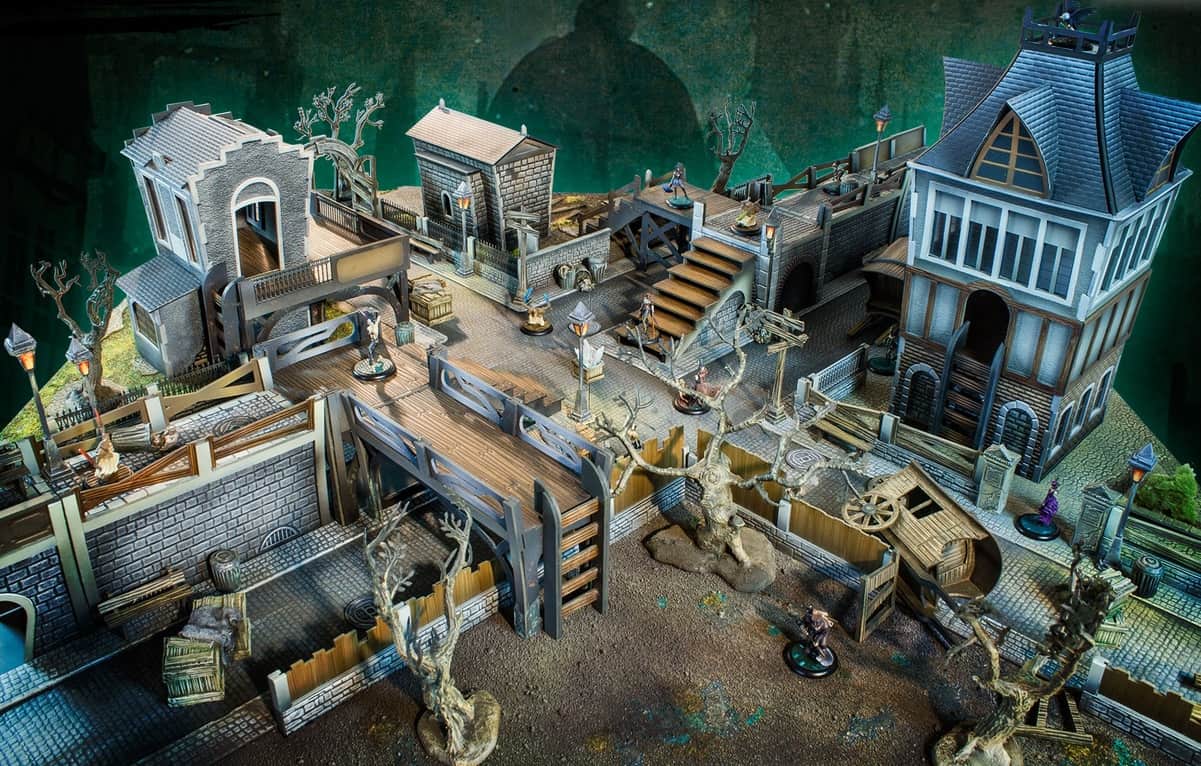 [Our tour of the most popular miniatures games is almost at an end! If you missed Eric Tonjes’ first few delightful and accessible reviews, do check out Infinity, Warmachine and Dropzone Commander.]

Eric: I’ll start with a confession. Every month, as I sit down to write this column, I feel a dilemma. Miniatures games are, of course, games. Part of the goal of these columns is to expose you to clever or innovative gaming ideas being developed in the miniatures world. Thanks to limits on space and the amount of time I’m comfortable demanding, I end up exploring the gamishness of the game and have little space for anything else.

Yet miniatures games are also more than simple games, and none exemplify this better than Malifaux, our pick for this month. They are, in a real sense, about style. You don’t spend outrageous amounts of time and money on little models just for the act of gaming – you could use cardboard tokens and cereal boxes with their rules. You buy and assemble and paint the models and build the terrain and read the lore for the same reason I own aviators and a (fake) leather jacket – because you want to feel cool. You want some panache and style with your dice rolls and movement decisions.

If that is true, then Malifaux by Wyrd miniatures is the coolest of the cool kids. It drips theme – a theme that is something like Western-Gothic-Industrial-Steampunk-Horror.

Really, though, that genre is another way of saying “all the awesome stuff at once.” Nightmarish cthonic horrors? Check. A family of gunslingers in cowboy hats and sombreros? Also check. Hillbilly goblins shooting pigs at enemies? A boy who turns into a monster named “Lord Chompy Bits” and might be dreaming the whole setting? Oh yes, and we’ve only begun. 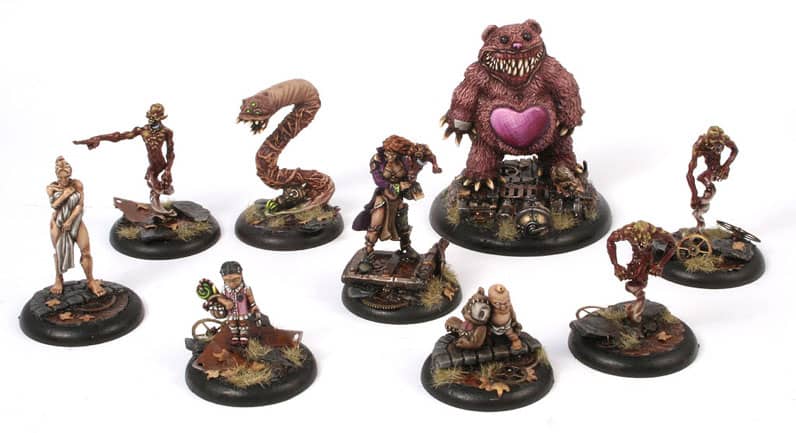 Within this world, you will assemble a cool crew of these cool guys and girls (and cool robots and cool zombies and cool demons), perhaps 6-12 of them to a side, and have a cool battle. The models are like little RPG characters, each with a distinct and creative set of rules and abilities. The scenarios they fight in are really clever, with varied objectives like planting explosives, delivering a message, murdering a protégé and so many more. Malifaux gets that you want to play games about exciting beings doing interesting things, and it turns you loose with a veritable arsenal of exciting and interesting to explore.

Case in point. One of my go-to crews is led by Victoria and her demonic doppleganger twin (also Victoria). They slingshot each other all around the board, switching places and dropping into groups of enemies in whirling balls of katana-flavored death. Meanwhile, I have a gunslinger blasting away and Ronin with cowboy hats sneakily grabbing objectives. Right when that all starts to fall apart, when my opponent kills any of my models (or the Ronin kill themselves – an actual special power they have), a giant undead monster named Killjoy pops out of their corpse, wherever they are on the board, and starts tearing things apart.

Granted, it’s not everyone’s idea of a good time, but as I play that particular combination of violently cinematic powers, I can’t help but grin. Since almost every model in Malifaux has some exciting flavour to it, you’re bound to find a faction that excites you.

[Yep. While illustrating this article I got really excited about a gang of railway workers and their railway golem. — Quinns ] 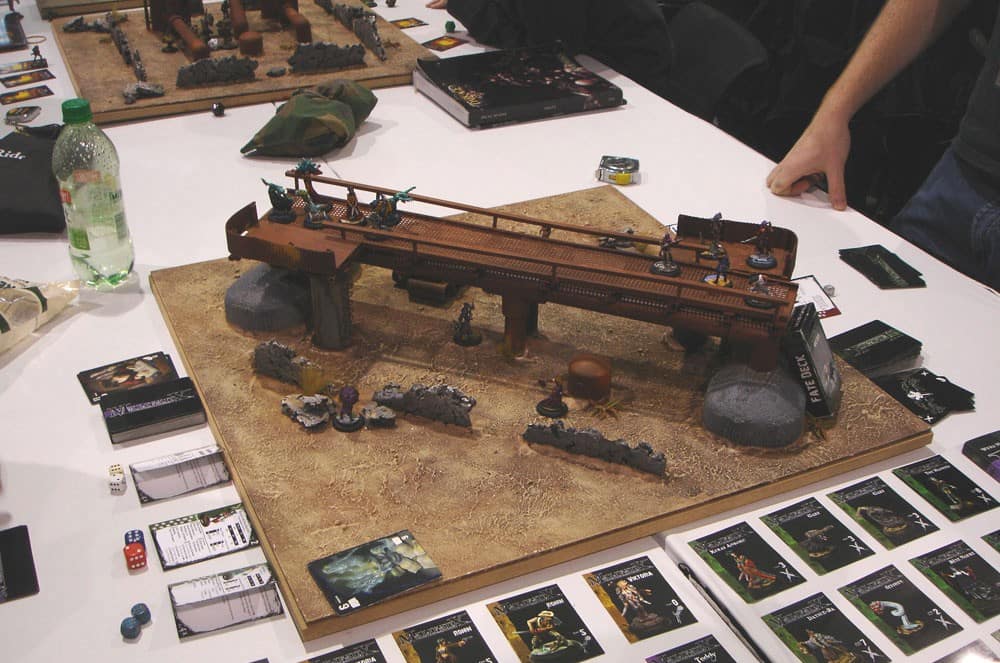 It’s great because, on some level, miniatures games should be invitations to fall in love with your little painted men and women. They have the potential to become the protagonists of your stories, to come alive in your hands. Sadly, though, the level of distinction most games give these characters is often “the girl who is slightly better at punching” or “the guy with the bigger gun.” Not so Malifaux – it gives every character, well, character. It makes them exactly the sort of vivid and badass heroes you want to fall in love with.

Don’t take this talk of theme as dismissing the rules, either. They are quite good. This starts with the most noticable thing you’ll see if you watch a game of Malifaux – the game dispenses with dice to instead give each player a deck of cards. (You can technically use any standard deck, but let’s face it, you’ll probably spring for one of Wyrd’s sexy custom decks with suits like masks and rams. Or, like me, spring for three).

This isn’t just some gimmick. You flip cards instead of rolling dice, but you also have a hand of cards you can “cheat in” to help those crucial rolls come off the way you need them – but only in situations that are already neutral or favorable. What looks at first like Western dressing is actually a brilliant resource mechanic, creating excruciating choices as you stare at that 12 or 13 and bite your lip, wondering which of the six important actions this turn you should use it for.
Connected with these card mechanics is the turn structure – while not unique in this, Malifaux uses interspersed turns where players alternate activations of single models. This, coupled with the fact that you are flipping (and potentially cheating) cards to defend as well as attack, means that you are constantly involved in the game – there really isn’t more than a minute or two when you aren’t able to do something.

Alternating activations also, on a higher level, change the whole experience of a wargame. In more traditional turn structures you develop a plan and then execute it. Sure, things might go wrong with this execution – that certain attack misses or that long shot miraculously works. However, you’re still basically picking a strategy and then watching it unfold. Malifaux’s turn structure is much more responsive. You never know what’s going to happen from activation to activation, and this makes it much more like a real fight – you have to constantly be adapting and responding to the punches your opponent throws.

The even better news is that Malifaux is extremely affordable. In these columns I’ve been trying to price games based on what is perceived as the “standard” size of play by the community. Malifaux, rather delightfully, gets you a good way towards that standard size with just one of the starter crews, and buying a couple more models will complete the set. Plus, they are for the most part really pretty and dynamic models, and lots of fun to paint.

However, speaking of the models brings me to one significant reservation. I’ve debated addressing this issue before in these reviews, but for reasons I’ll note below this seems like the game to do it. Let’s talk about the portrayal of women in Malifaux. 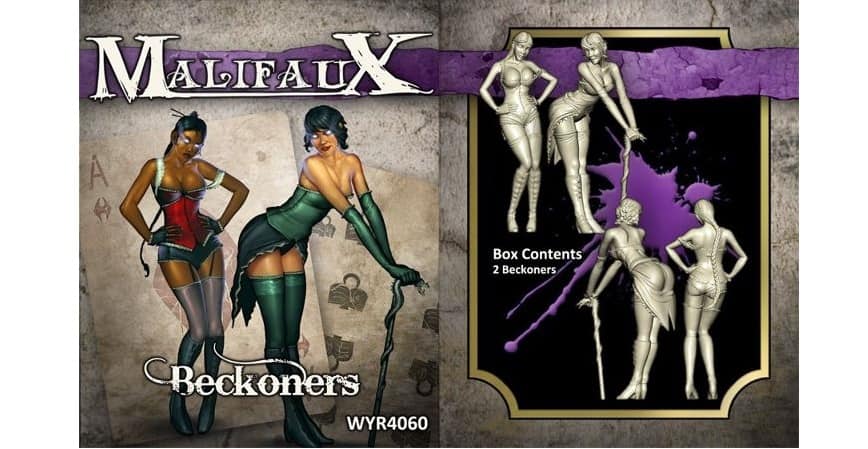 Now, I’m not talking about the characterization of women. To their credit, Wyrd includes many strong (and flawed, and scary) female characters in the games and stories. Unfortunately, plenty of the models for said characters are blatant fan service.

This is hardly unique in the realm either of tabletop games, or gaming more generally. Infinity has some of the same issues, even Warmachine has the frustrating tendency to feel high heels are appropriate battle attire, and we’re not even touching the worst offenders in these columns. So yeah, there are lots of caveats to be made.

But here’s the thing. A while back my daughter, looking through some of my miniatures, picked up a Malifaux model and said “Daddy, why is this warrior girl in her underwear?”

My daughter is four.

I told her ,“Yeah, that’s kind of silly, isn’t it? I don’t know why they did that. But she’s a strong fighter, right?”

The thing is, I do know why she is dressed that way. We all do. But if I actually explained it to my daughter, it would crush her burgeoning imagination and sense of self. That bothers me – bothers me enough that I have a hard time convincing myself the quality of the game overrides it.

While we’re on the topic, Wyrd also goes to a few other troubling places. Take Seamus, the extremely popular, definitely-not-Jack-the-Ripper necromancer who travels around with the undead women he has murdered and reanimated. Which wouldn’t be as offensive if he was clearly meant to be despised, but who seems to largely be a source of humor for the players I’ve encountered. Because, you know, misogynistic violence. Hilarious. There’s also this gremlin, whose backstory explains that he chooses to dress up as a silly racial stereotype. 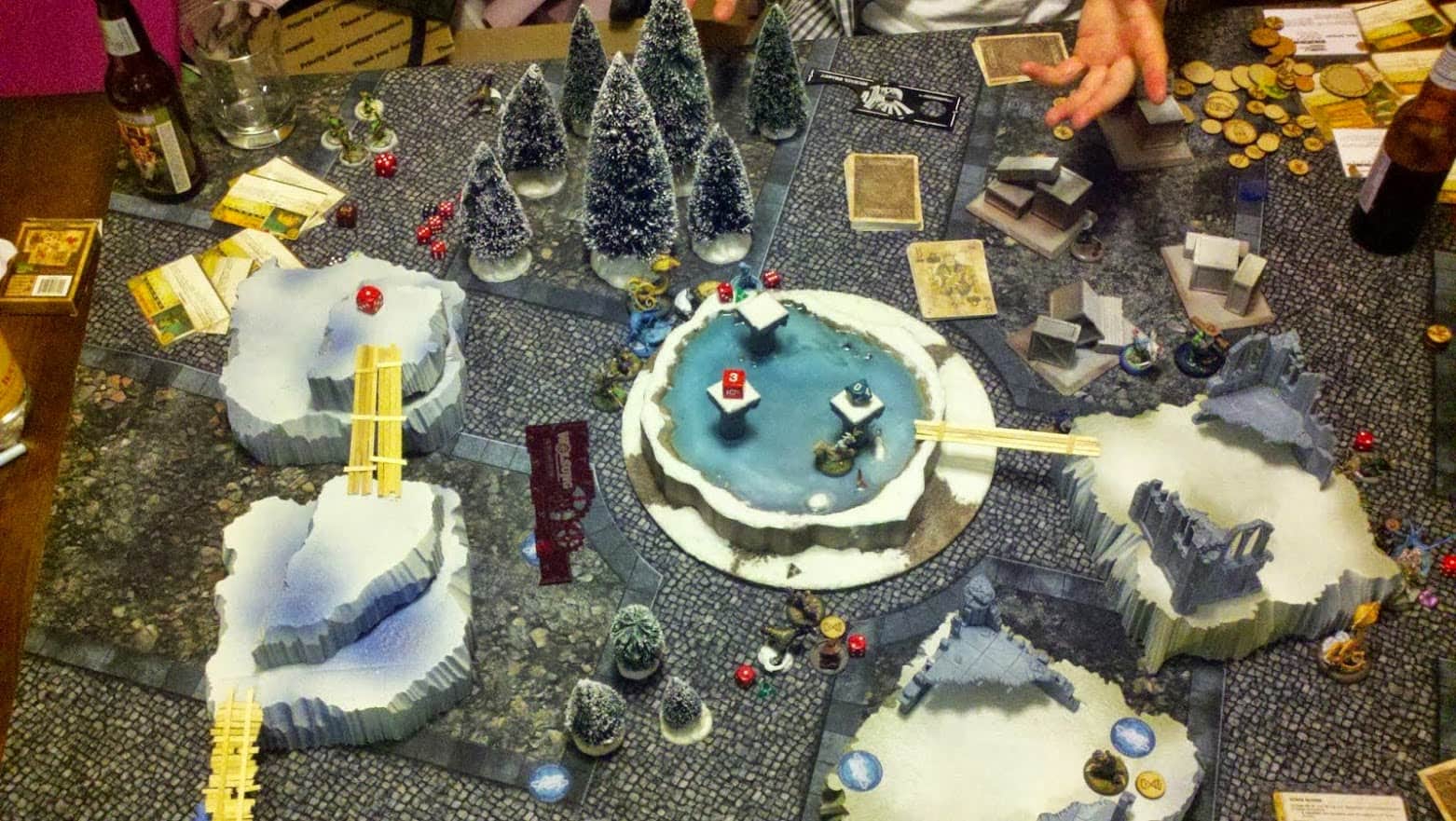 Alright, I’ve taken my deep breath and calmed down. I know I sound frustrated about this stuff, and I know there are diverse opinions and convictions about how to handle those less-inclusive parts of the gaming hobby. Truth be told, I don’t even know what I think. As should be obvious from what I said earlier, I think Malifaux is a fantastic game. I know that other game companies we’ve touched on in these columns have some of the same problems, even if they seem to be getting better about it. I don’t pretend to know how you should process all that.

What I do know, however, is that it just feels tragic to me that games have to contain such parochial portrayals of perceived outsiders. It’s tragic because I want everyone to be able to enjoy them. I think Wyrd has a fantastic, stylish game. I just wish that, in inviting people to play it, I didn’t have to apologize for the insensitive culture of the hobby. Because, unlike almost everything else about the Malifaux, it just isn’t cool. 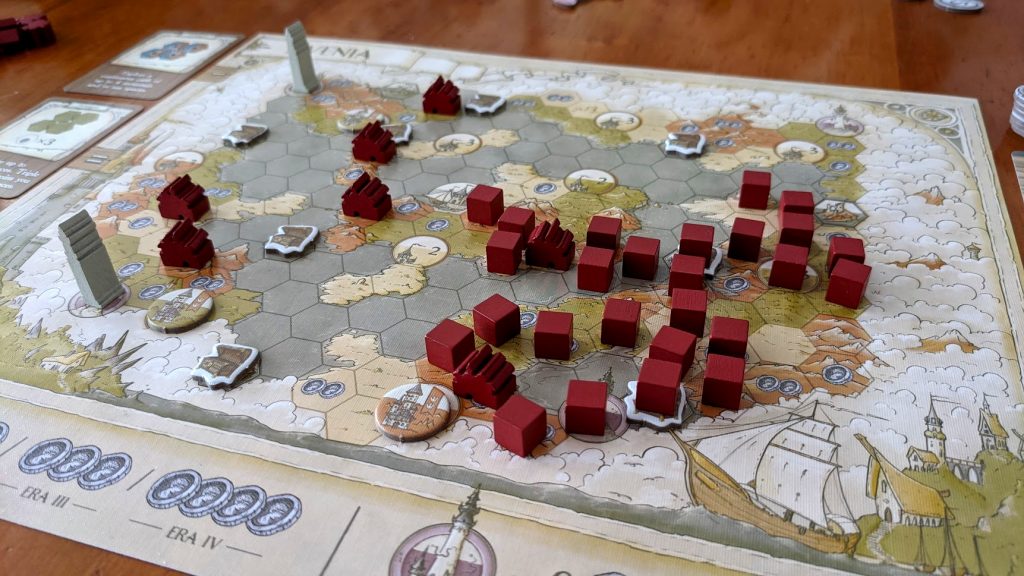 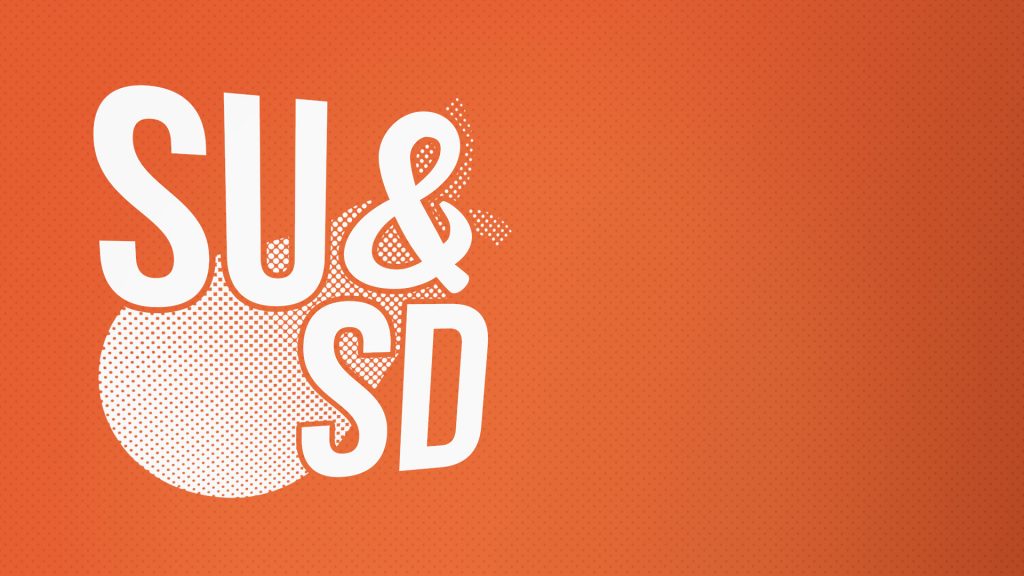