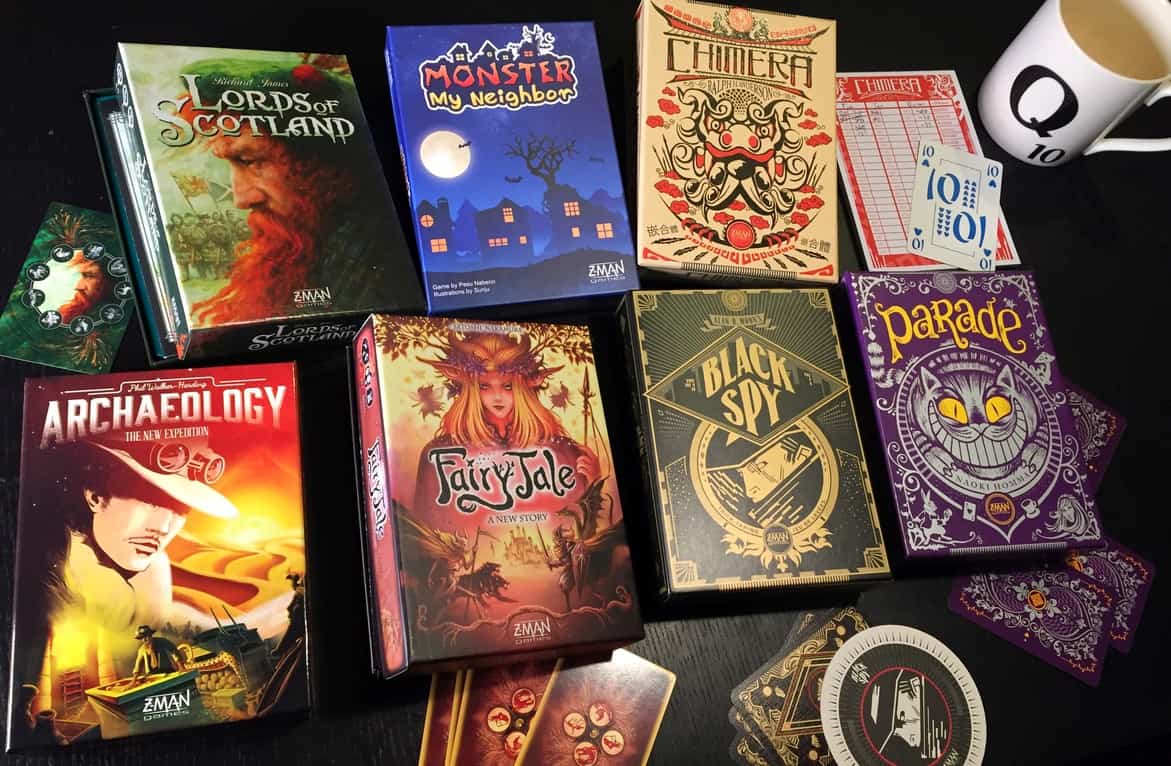 It turns out they’re not all hits. Lords of Scotland’s cautious soldier management is awesome, but the game is a little too similar Condottiere, a perfect card game that I wouldn’t hesitate to recommend to anybody. Black Spy and Chimera are breezy, funny trick-taking games in the manner of Hearts or Bridge, but they’re not particularly exciting.Monster My Neighbor is mediocre. Fairy Tale and Parade could be excellent, I haven’t tried them yet.

No, they’re not all hits… but the latest entry very much is. It’s a new edition of 2007 game Archaeology titled Archaeology: The New Expedition. It came out just this month, it’s as silly as Arboretum is thinky and it’s absolutely fantastic fun.

Archaeology casts 2-5 players as the worst kind of 1930s archaeologist, rummaging through a central deck of Egyptian antiques, collecting sets of cards and selling them to museums back home. You’re absolutely not the good guys. You’re burglars with diplomas. But if it’s any consolation, you’re going to be stressed out of your tiny mind. 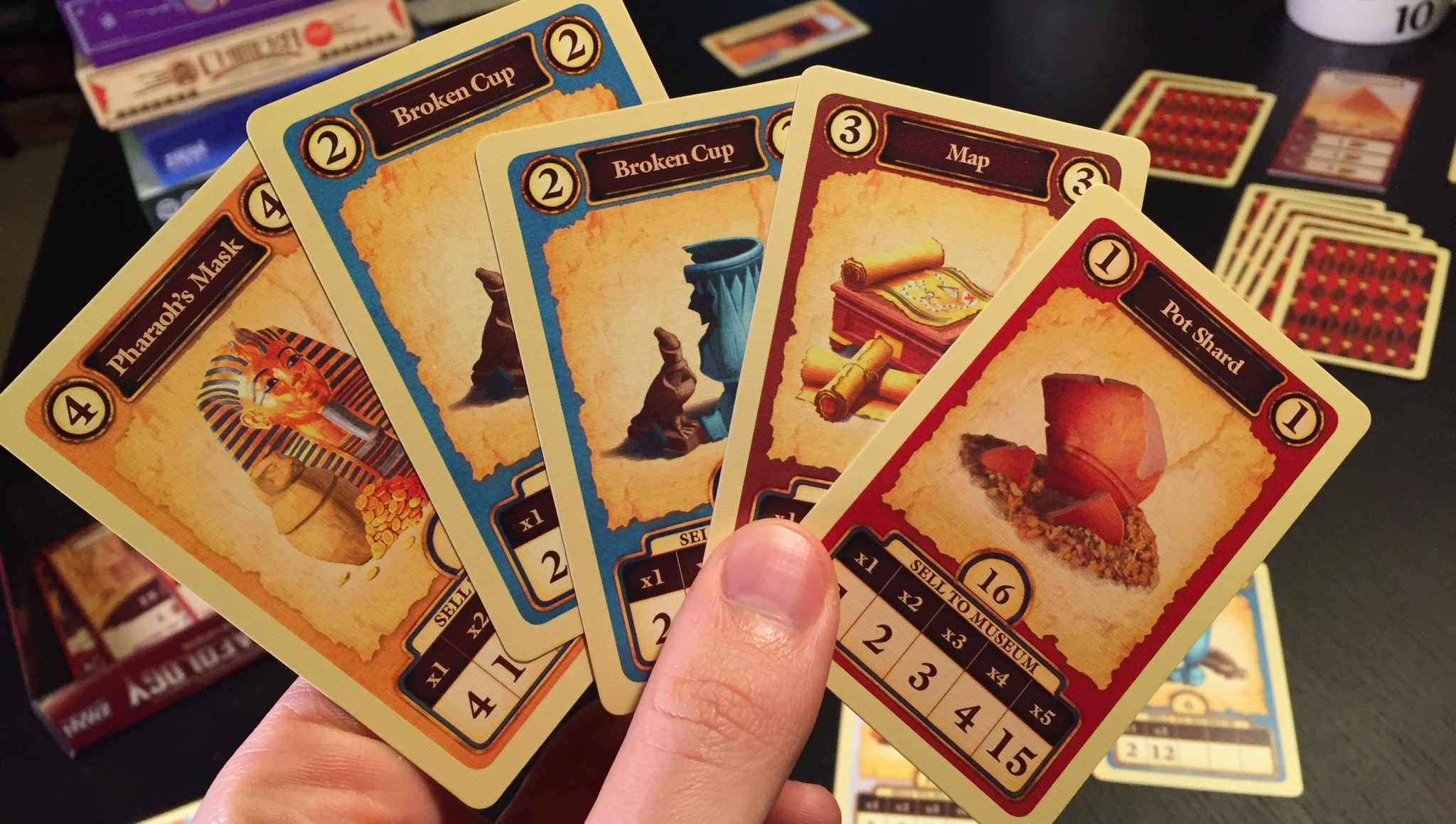 Here’s how it works: On your turn, you draw a card off the deck and into your hand. Perhaps it’s a crappy pottery shard, or perhaps you unearth a stunning, golden pharaoh mask, or a portion of a secret map!

You then have the option of trading anything you’re holding at a central market of face-up cards using their “trade value” printed at the top. Drawing – say – a pot shard is worthless if you’re not collecting them, but you could swap two of them (value 1) for a coin (value 2) if you’re collecting those. That kind of thing.

Finally, you can cash in any cards you’re holding, shipping these treasures off to a museum where tourists will enjoy their god-given right to look at them for a few seconds and maybe post an instagram. But as you can see from the numbers at the bottom of these cards, full sets are worth exponentially more points, so why would you ever cash in an incomplete set… ?

Because of the sandstorms hidden in the treasure deck, that’s why. Hateful, disgusting, plan-devouring sandstorm cards. When someone draws a sandstorm everyone has to discard half of their entire hand to the central market. 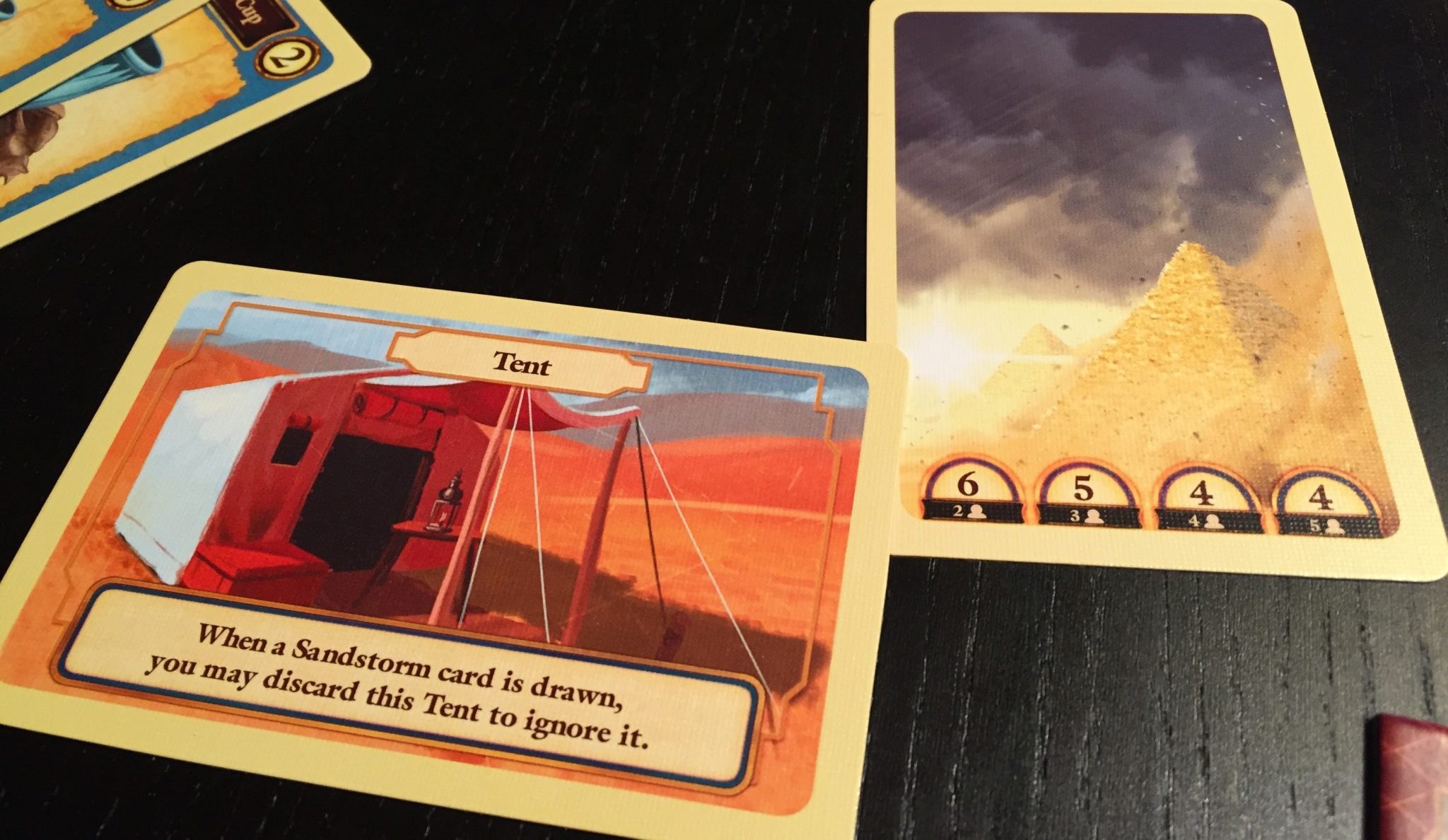 Sandstorm cards are schadenfreude given paper form and a smooth linen finish. Any time you draw one, some players around the table who just sold their stash and are only holding one or two cards are going to giggle outrageously. Most other players will moan, and one greedy player who was planning on selling most of their bulging hand the very next turn is going to look disbelievingly at the sandstorm card and emit an animal cry. “NNNNHHHAAAAGH,” they’ll say. “FFFFUFOOOs.”

Sound annoying? It is! It’s completely insufferable. It’s going to make you want to eat your cards so the game can’t have them.

But Archaeology gets away with this mechanic for the same reason that Galaxy Trucker gets away with individuals sometimes getting their ship sheared in half. Yes, that player becomes sad. But everyone else is filled with unbelievable, joyous relief, so it’s a net gain for the game, and as you receive your punishment you do so knowing that it was ultimately your fault, and you’ll soon get to watch this happen to someone else.

The other good news is you can discard your tent card to avoid a sandstorm. The bad news is, you get exactly one tent card and there are between 4 and 6 sandstorms in the deck, depending on the number of players.

The worst news of all is that unlike Pandemic, these cards aren’t seeded carefully throughout the deck. They could be anywhere, at any time. You could discard your tent, walk out of it the next morning, yawn, and immediately catch a mouthful of sand from the next card being another bloody sandstorm. 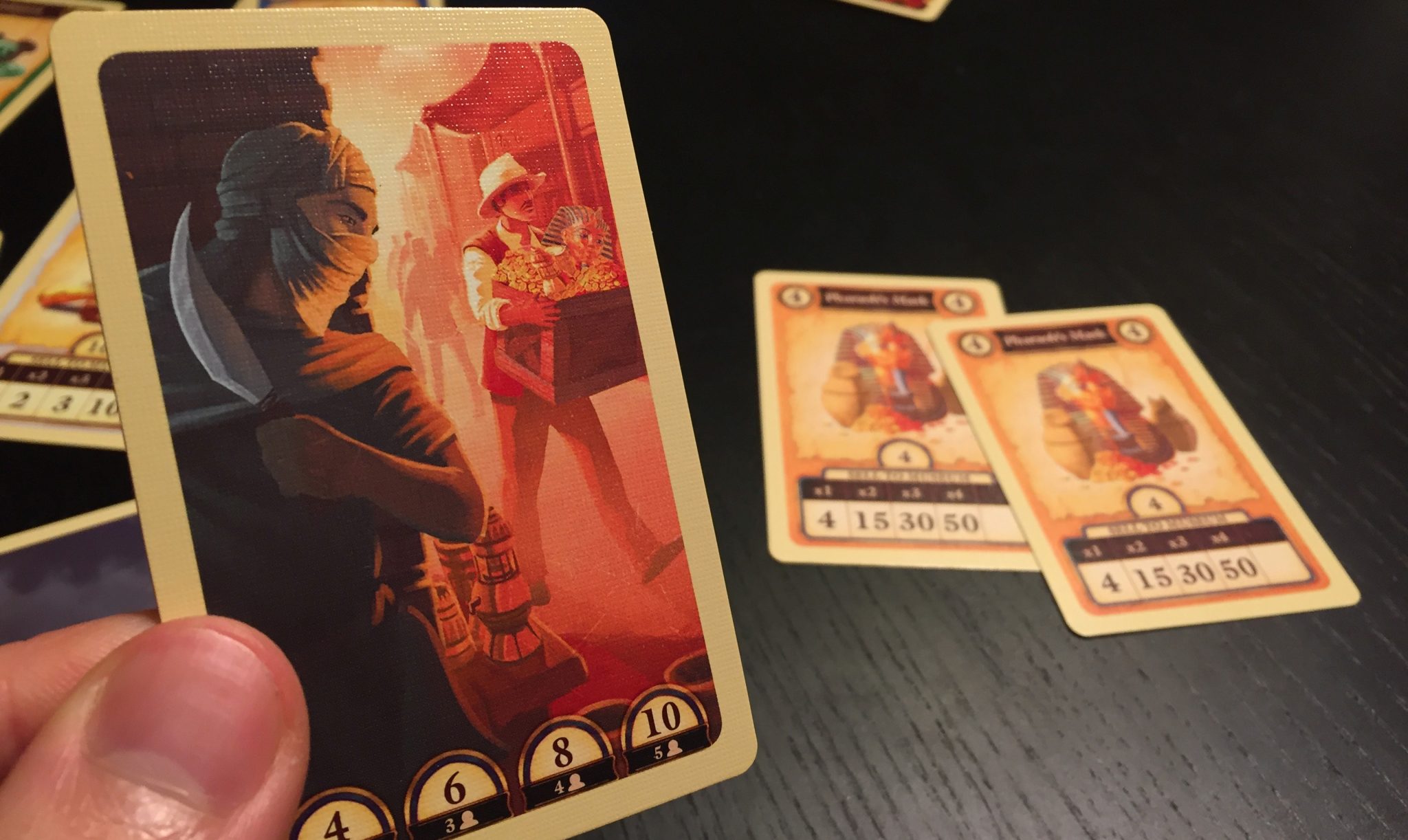 There are just two systems left to tell you about. It really is a very simple game.

You’ll sometimes find thief cards in the deck, allowing you to hire a local entrepreneur to steal a card from another player at random. This lets you choose between hitting the player in first place, or the one who you know has a map or pharoah mask. Maybe you’ll get it… ! Which brings us to the maps themselves, which are just an absolute treat.

The new edition of Archaeology comes with six (count ‘em!) different locations where you can set your game. Whichever site you pick, whether it’s a sphinx, tomb, pyramid or whatever else, it gets filled with fabulous artifacts and players have to discard maps to get there and claim the treasures.

But each site gives the game a different spin- descending into a mine sees you playing blackjack, and you either have to choose to leave after drawing each card or you risk going bust and losing all of it. The buried ruin is initially almost empty, but each sandstorm uncovers more treasure in each of its wings.

The sites are always there to give you that gentle nudge to take the game down off the shelf, or play it over again once you finish, which is a feature I really appreciate. By the time you’ve tried all 6 sites you’ll want to try the 1st one again. 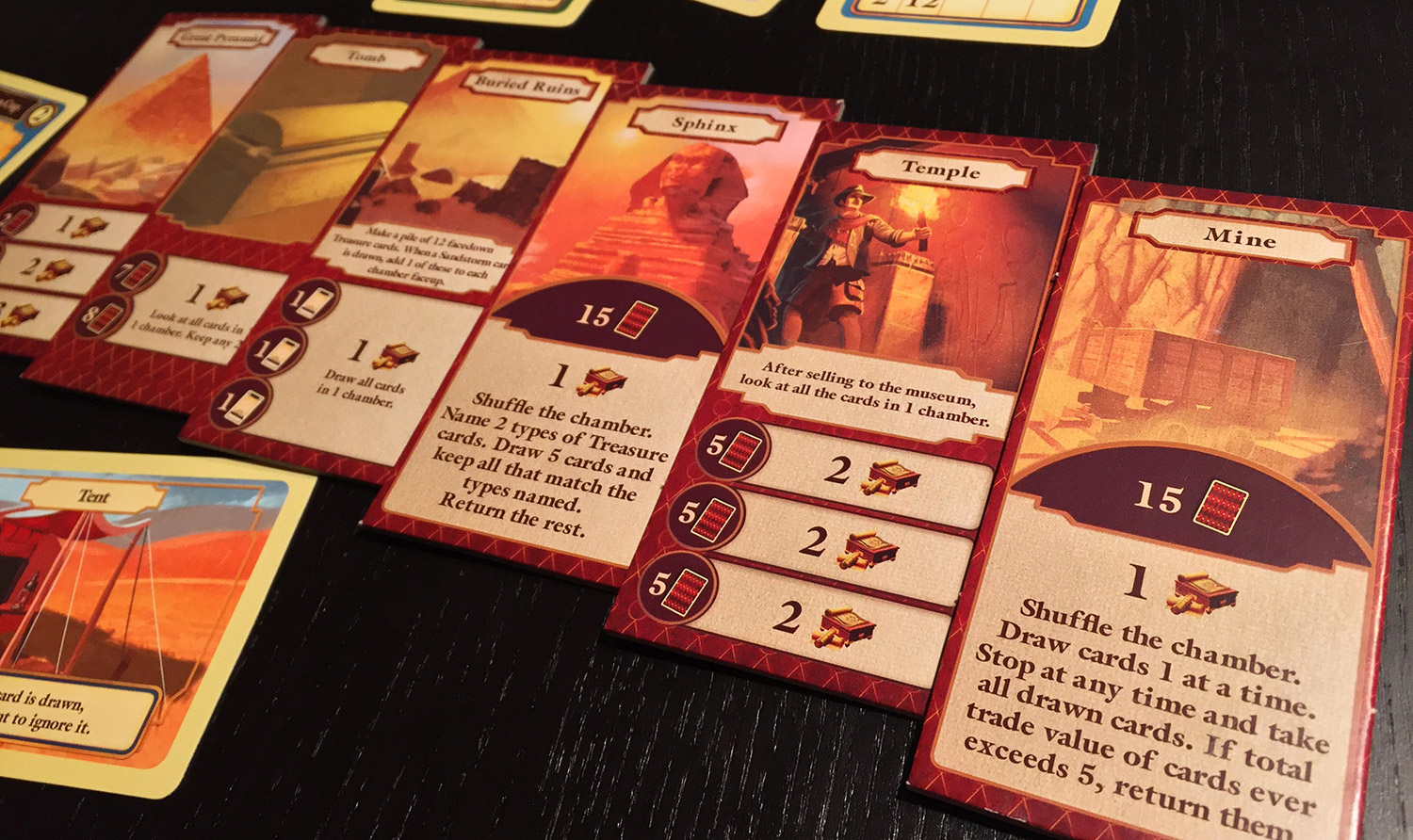 And you will want to play Archaeology again, since the deck runs out and the game ends in just 20 minutes. It’s quick. It’s fun. It’s heinously unfair. And I really, really like it.

The heart of Archaeology is a perfectly robust game of set collection and balancing risk vs. reward. When it’s not your turn you can luxuriate in the tasty, fudge-like maths of simple integers printed boldy on each card, weighing up a card’s trade-in value, with the ascending value of its set, with how many are in the deck, with how many you’ve seen, with what else is in the market. But when it’s your turn and people are waiting, Archaeology has enough hidden information that you can go with your gut and not feel like you’re playing poorly, which gives the game tremendous momentum.

But what pushes Archaeology from a passable game to a great one is something that also perfectly suits its theme. It’s the question of ”What if…”, as players dig through the deck. 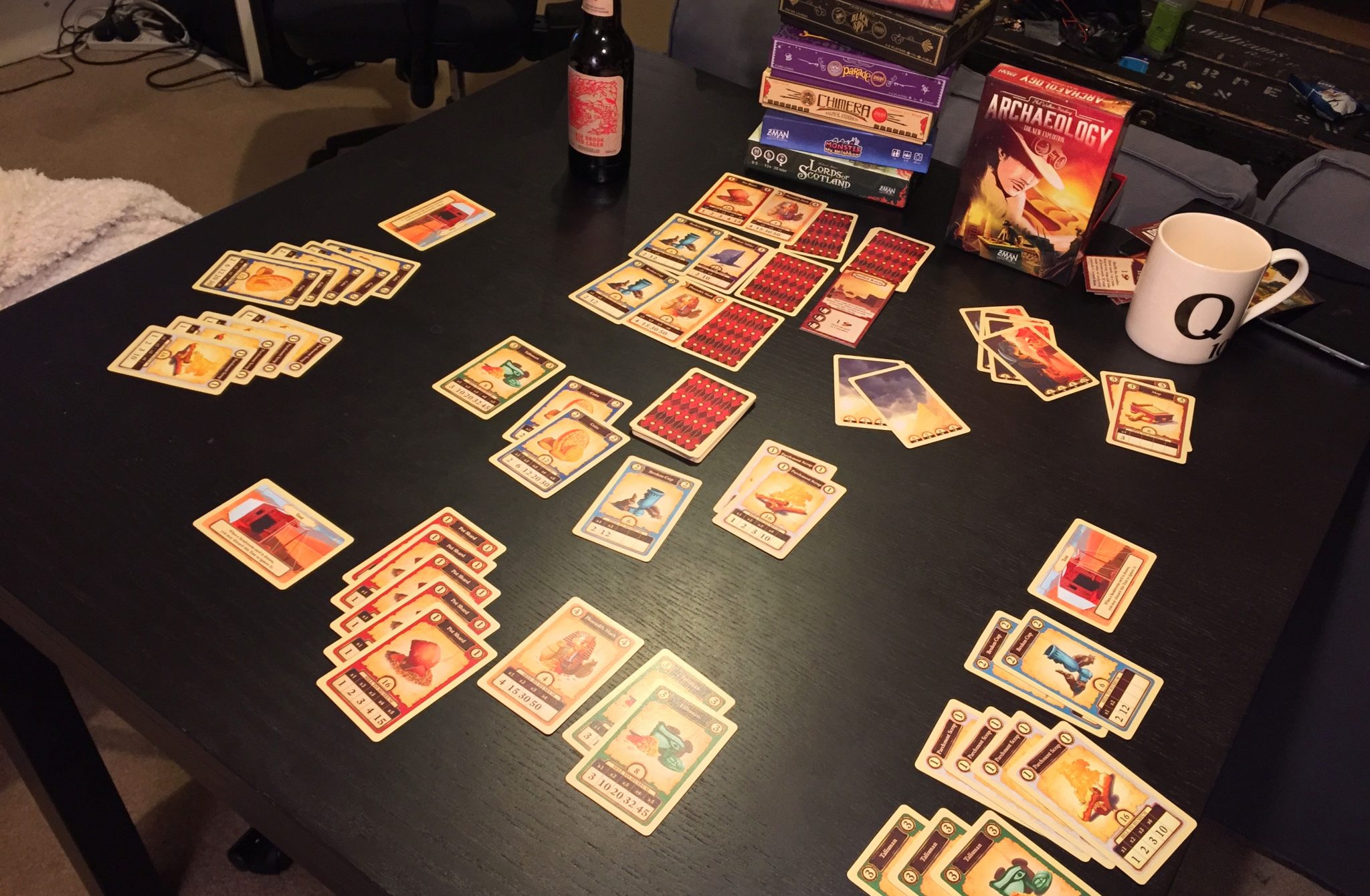 Contained within each of your turns is the thrill of yanking the arm on a slot machine. There’s the chance that this turn, your pull from the deck will be a rare treasure or the final piece of your map, which is then going to blow your game plan wide open.

When superstition gets the better of you and you sell a set because you haven’t seen a sandstorm in a while, you end up praying for sand. Because watching your friends moan and halve their hands is as sweet as a whole mouthful of fine Egyptian baklava. And whether it comes from a sandstorm or simple coincidence, your friends will often end up dropping cards that you desperately need into the market, where you can pick them up for a song.

It turns out I haven’t used the word “luck” at all in this article yet, so let’s fix that: This box is a celebration of luck, and how fun it can be. It’s got moment-to-moment luck when you draw expensive cards. It’s got serendipitous luck as your friends discard cards they didn’t know you need. It’s got great jackpot-level luck as you assemble two pieces of a map and find riches in an ancient tomb! But the spectre of Bad Luck haunts the whole affair, threatening to rob you blind if you don’t pay your respects.

And who couldn’t use a little luck in their life? Luck gets a bad rap in board games primarily because it’s frustrating to have high level planning and strategy undermined by the roll of a die. But that’s not luck’s fault, that’s bad game design.

Luck can be (and is here) exciting and electric, fun and very, very funny. All a designer needs to do is ensure that the random chance comes thick and fast enough that players can quickly recover from a bad position, and also tell the players the odds of anything that might happen. Archaeology does both of these things, and the results speak for themselves. It’s a truly addictive game. You want to play it again because you want to test your luck again. 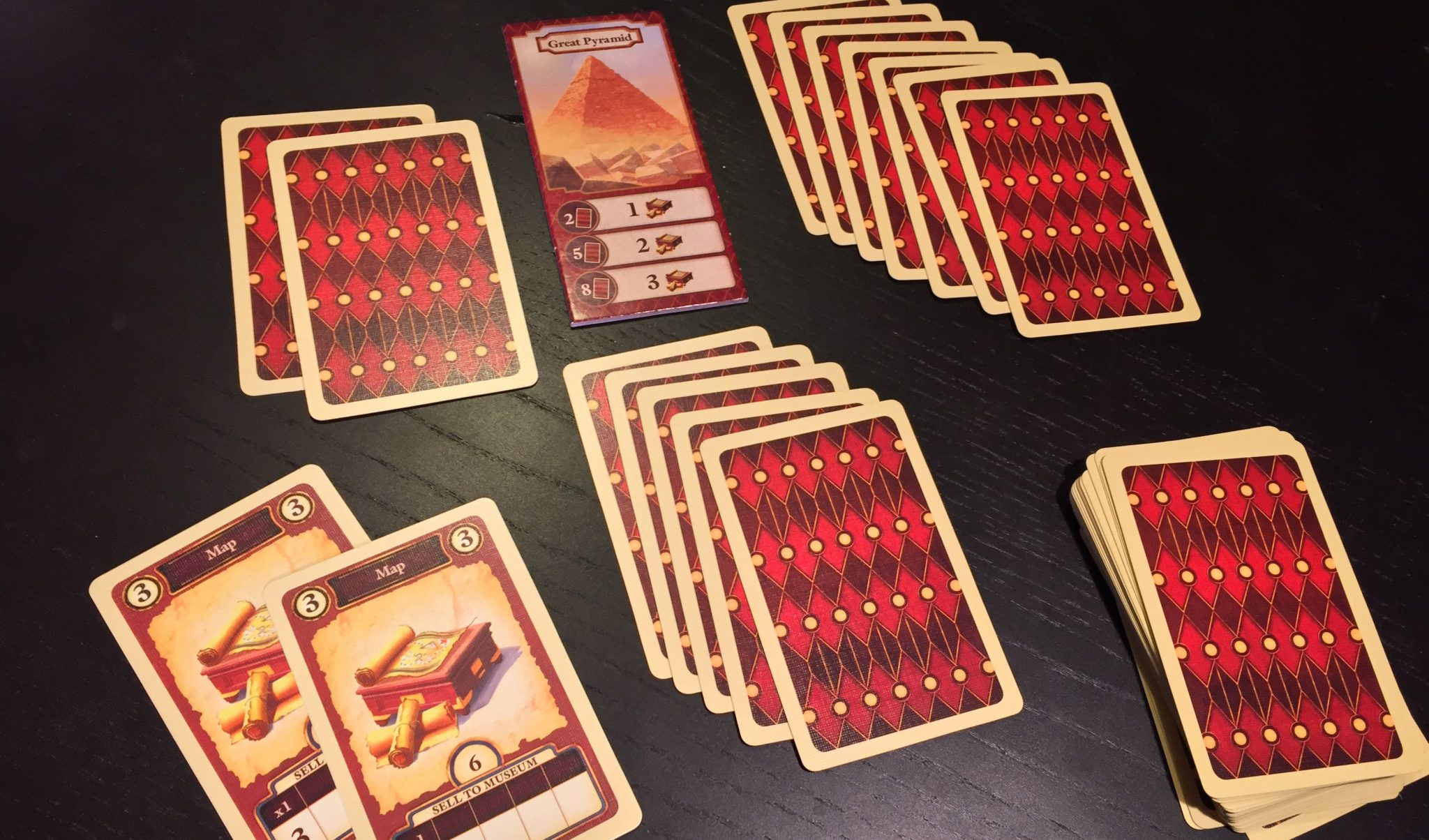 And if I can get truly geeky for a second, just look at those card backs. That’s not just a classic look, it’s a classic look from the period when this game is set. That makes me very happy indeed.

All this said, I’d understand if you didn’t run off and order Archaeology: The New Expedition right now. In a hobby full of giant boxes overflowing with components, ideas and stories, you might find it hard to drum up enthusiasm for a game that’s quite such a silly rollercoaster.

But I’ll give you the same line I used back when we were talking about Love Letter in 2013. So far in 2016, my friends and I haven’t played a game that’s provided more laughs, screams, joy and heartbreak in less time.

If you enjoy searching out rare old treasures in pristine condition and paying under the odds for them? You gotta drop £15 on a copy of Archaeology. 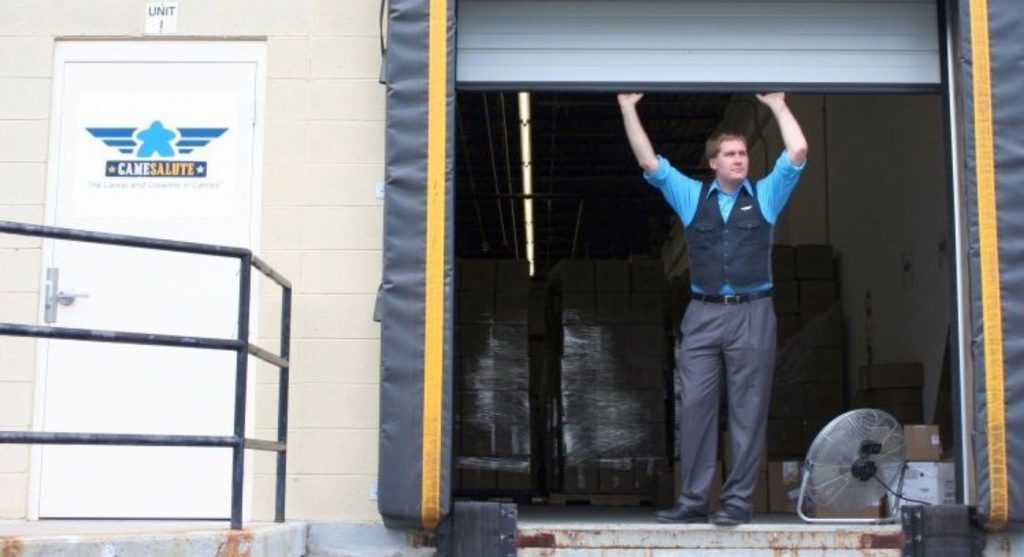 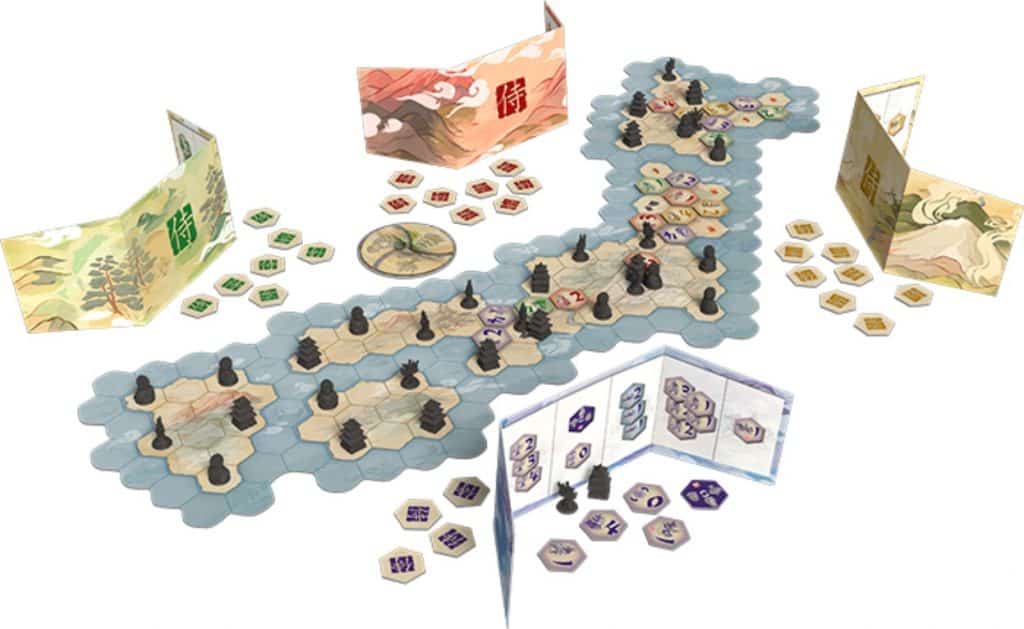