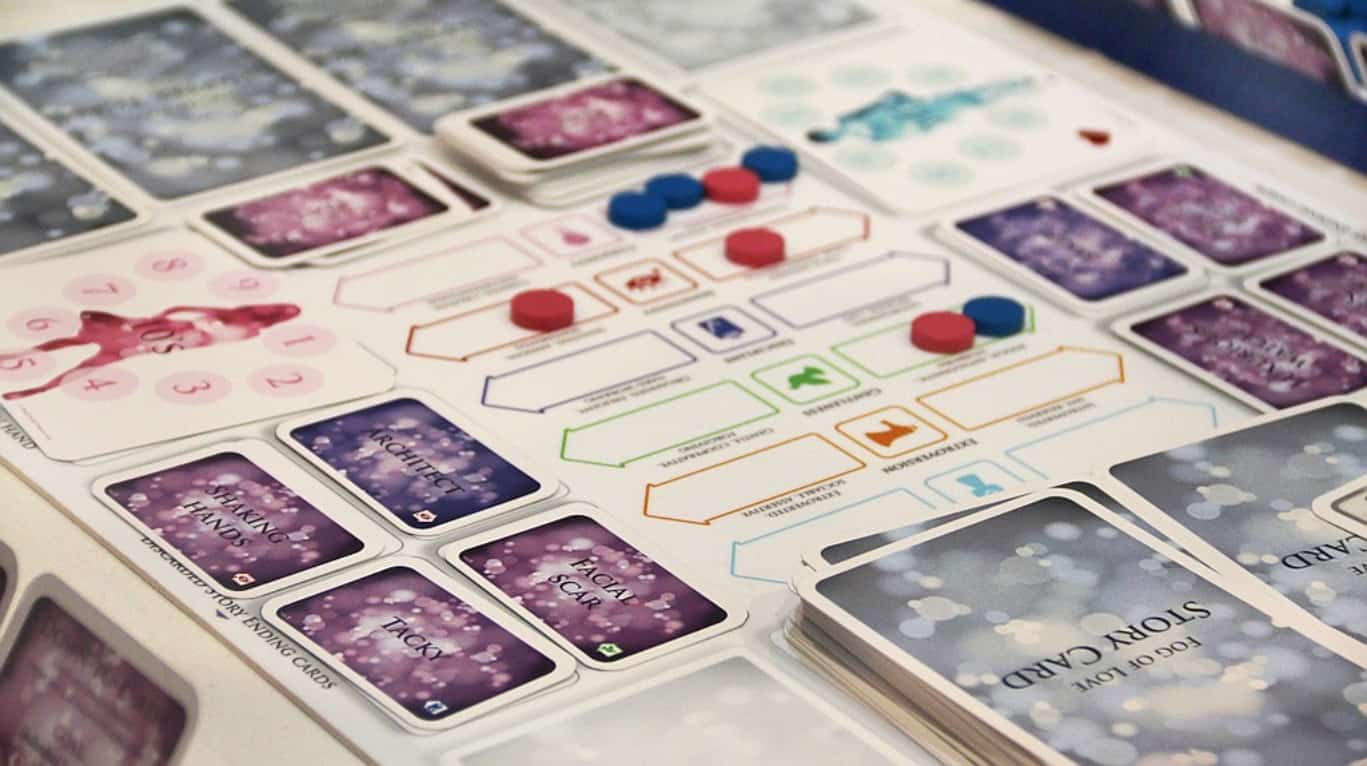 Paul: March is here and with it what might be THE MOST EXCITING GAMES NEWS OF THE YEAR SO FAR. Maybe. I don’t want to get your hopes up or anything, but we have a whole host of great stuff here. Let’s get started with one of the most interesting games concepts I’ve seen for long time…

We’ve already seen the abstract And Then We Held Hands do well on Kickstarter, but this is a completely different flavour of fish. Fog of Love gives you hidden personality traits, a whole host of situations to navigate together and life goals that may or may not match up.

The way it’s laid out reminds me of Dead of Winter, except instead of deciding who gets the last box of medicine, I guess you’re surprising your friend with a trip to the Maldives?

Paul: And look at how happy those designers are! They’re pretty happy.

Quinns: Personally, I’d be a little happier backing this if it was coming from a proven designer. But what a concept!

Paul: Yes. This is a great idea for a game, not least because, whenever I think of love, I think of fog. And the deep, mournful horns that blow within its misty depths. The horns of love.

Quinns: That makes sense. I suppose if this game were targeting me they’d have to have called it SEX KLAXON. 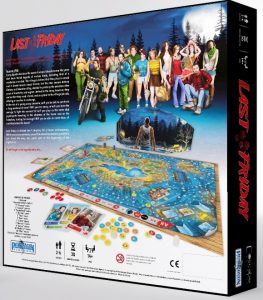 MOVING ON. If you’ve ever been a fan of slasher horror, the kind of films where a bunch of young people go camping and then politely take turns to die, Last Friday might be the game for you. In this forthcoming game of deduction and hidden movement, one player is a murderous psychopath, while the rest are trying to flee for their lives.

I for one am hoping that this game rips off Escape from the Aliens in Outer Space. Somebody has to.

Paul: While we get all sorts of competitive games these days, it’s rare we have anything that’s so baldly and blatantly about trying to slaughter everyone else. I’m interested to see what Last Friday can bring to the hidden movement genre, particularly as both Letters from Whitechapel and Fury of Dracula are already great examples. Then again, I’ve never been much of a murderer and I have to admit that I’ve murdered zero people so far. I’ve really dropped the ball on that. 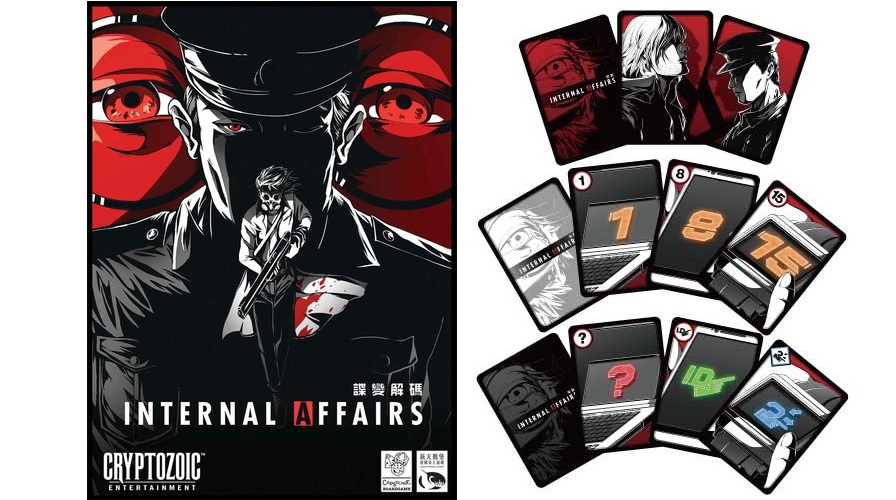 Also bristling my deductive denticles is Internal Affairs, a forthcoming game of secret identities where undercover agents have infiltrated both the police and triad forces. Each player gets a secret identity made up of three ID cards, locked by a special code that can potentially be cracked by other players, or which can be changed by cards being moved around to alter their allegiance.

This isn’t just a resistance-style team game of lying and misdirection, it’s a game about discovering who is really working for who, a situation that’s constantly fluid.

Quinns: If that’s still not enough intrigue to intrigue you, Mysterium designers Oleksandr Nevskiy and Oleg Sidorenko have been working on a new game of secret organisations and backroom politics. Behind the Throne is about ruling a kingdom through intrigue, blackmail and good old pushing your luck. How successful a political manipulator will you be? It all depends on how many dignitaries and servants you control.

Paul: I’ve never been much of a servant controller and I have to admit that I control zero servants so far. I’ve really dropped the ball on that.

While I try and recruit people to do my chores for me, why don’t we all revel in the news that Elzra Games just casually turned up in the SU&SD comments the other day to announce a new, standalone, competitive version of Catacombs, sans Overlord. We don’t know that much more about it yet, but our thanks go out to Elzra Games not only for this wee offhand exclusive, but also for their turning up to join in, add some rules clarifications and generally be awesome. This isn’t the first time we’ve had designers and publishers drop in to contribute to the discussion and I’d thoroughly recommend you keep one eye open, as well as your autograph book in hand. 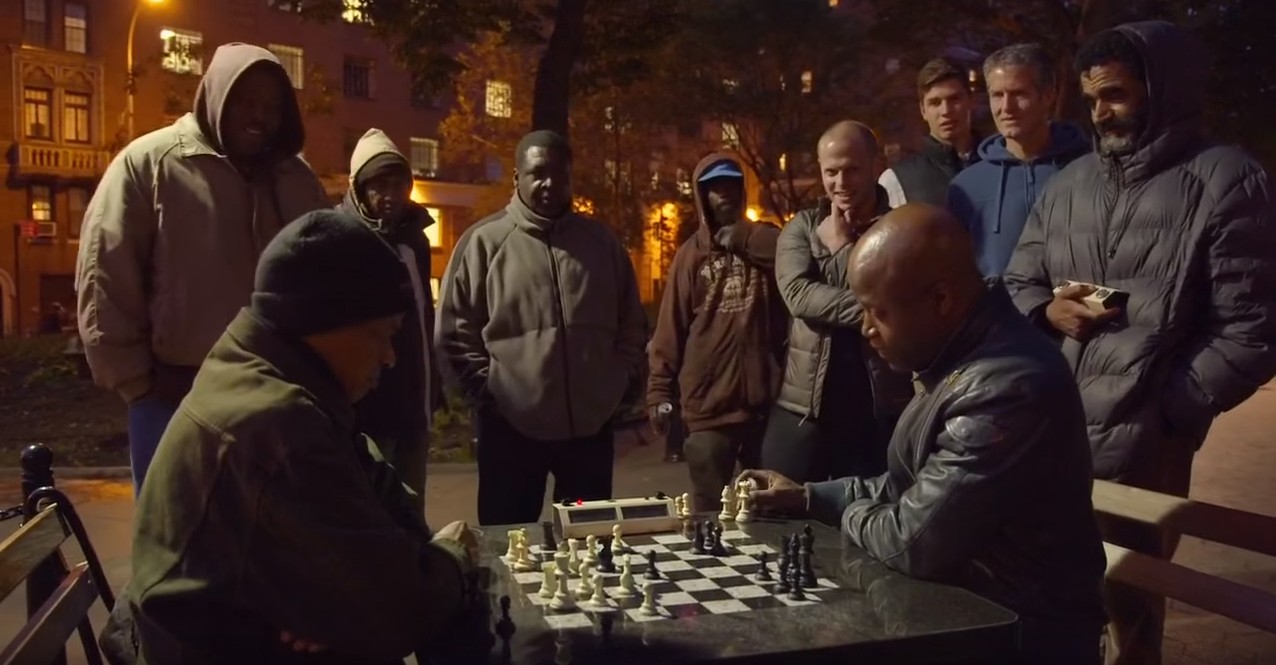 ANYWAY, now we get to my favourite part of this games news, which is this video of chess-playing in New York’s Washington Square, which Reddit’s boardgames board found the other day. The man playing white is, well, basically a chess hustler, while his opponent just happens to be a grandmaster who doesn’t quite fall for his tricks and… you really have to watch it. It’s a wonderful clash of two sharp and very incisive minds.

Quinns: Can I also say that this video reminded me of tournament-level Netrunner? Is that allowed?

You can follow their exact game here, which covers all the moves and possible alternatives, though it doesn’t include any of the attitude or slight of hand. If you’re as fascinated by the sneakiness as the sass, you may be interested to learn that the world of professional Bridge also has its fair share of cheating. Or at least debates about what might be considered cheating, given the etiquette of the game…

What I love about this video is how the cheating becomes part of the tapestry of the game. Not only does the grandmaster first have to notice the cheat as it happens, if he wants to reverse the move his only option is to physically move it himself in a way that’s similarly illegal.

Paul: I took a budget city break in New York just the other week and happened to find myself wandering through Washington Square, seeing some of those chess players huddled against the spring wind, and my friend warned me they were certainly savvy people weren’t to be underestimated. It’s not that they were necessarily going to pull any tricks, only that they play so damn fast that they have speed chess down to an art. When each player only has five minutes on their clock, you can’t analyse ten moves ahead. You have to react to a position, exploit holes that appear and WHACK THAT TIMER. It looks no less impressive in person. 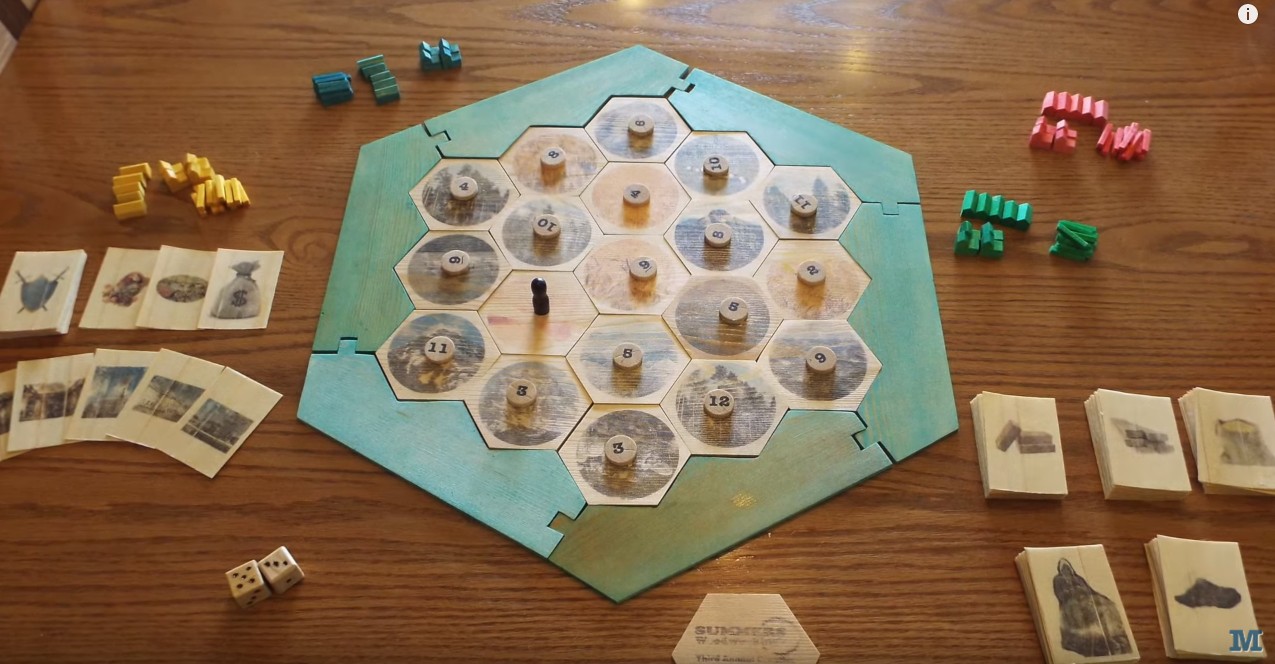 Quinns: Speaking of time, we’re almost out of it! We have just enough left to tell you about the person who made an entire game of Settlers of Catan out of one 2×4 piece of wood, piece by piece…

Paul: …and remind you that the second season of Board with Life has kicked off, with adebut episode in the style of Fiasco. What could possibly go wrong? Given Fiasco, I’d say everything.

Quinns: We were impressed by BwL’s first season, but the second is proving to be even better. Absolutely amazing stuff. 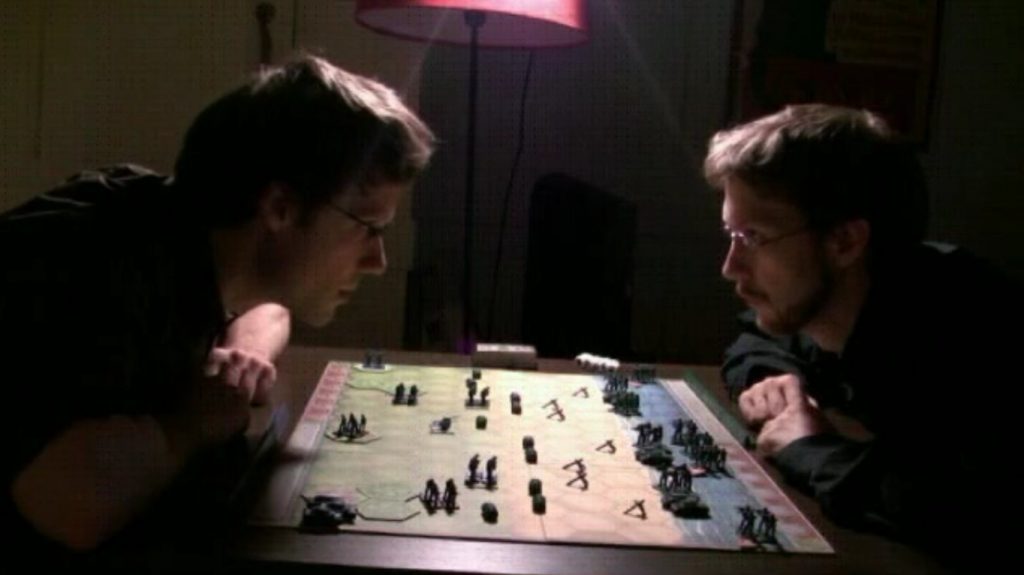 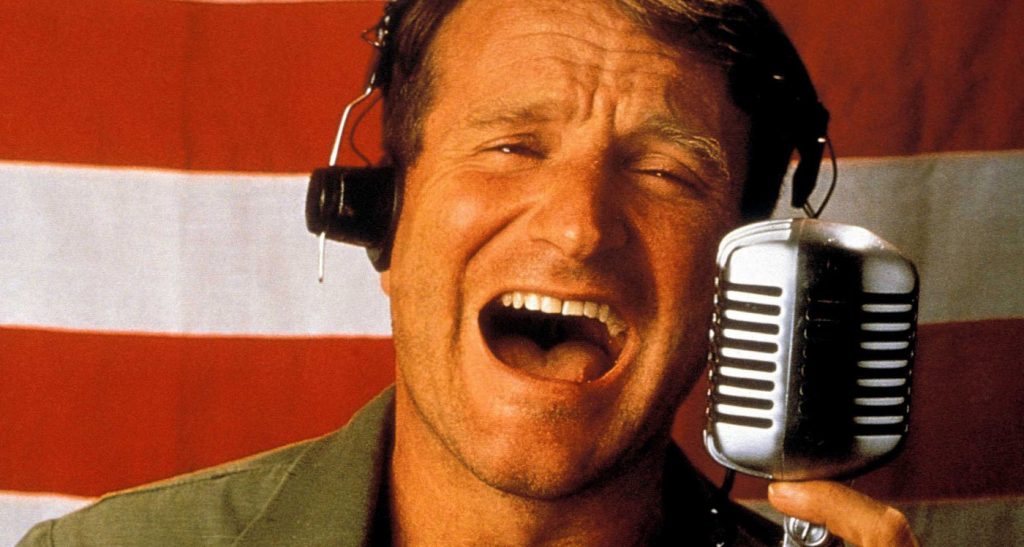 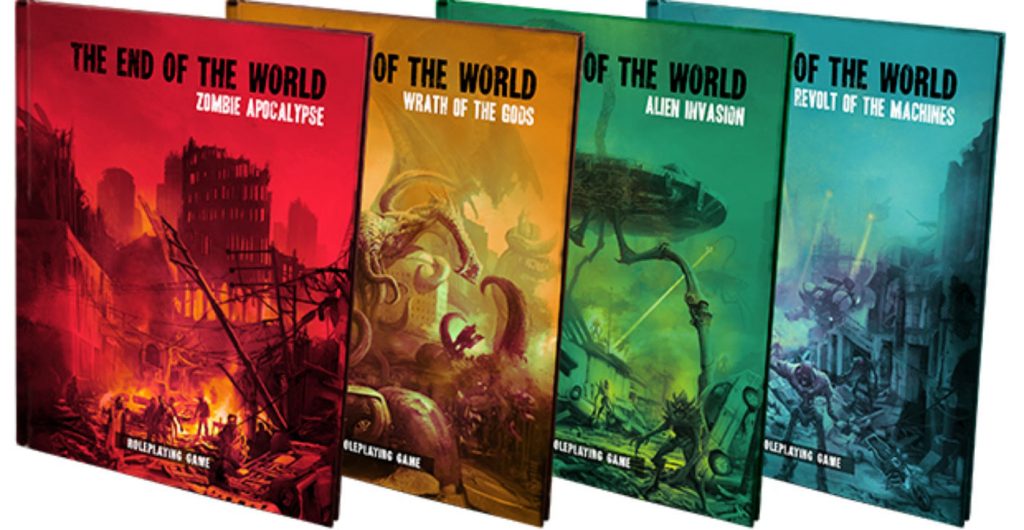