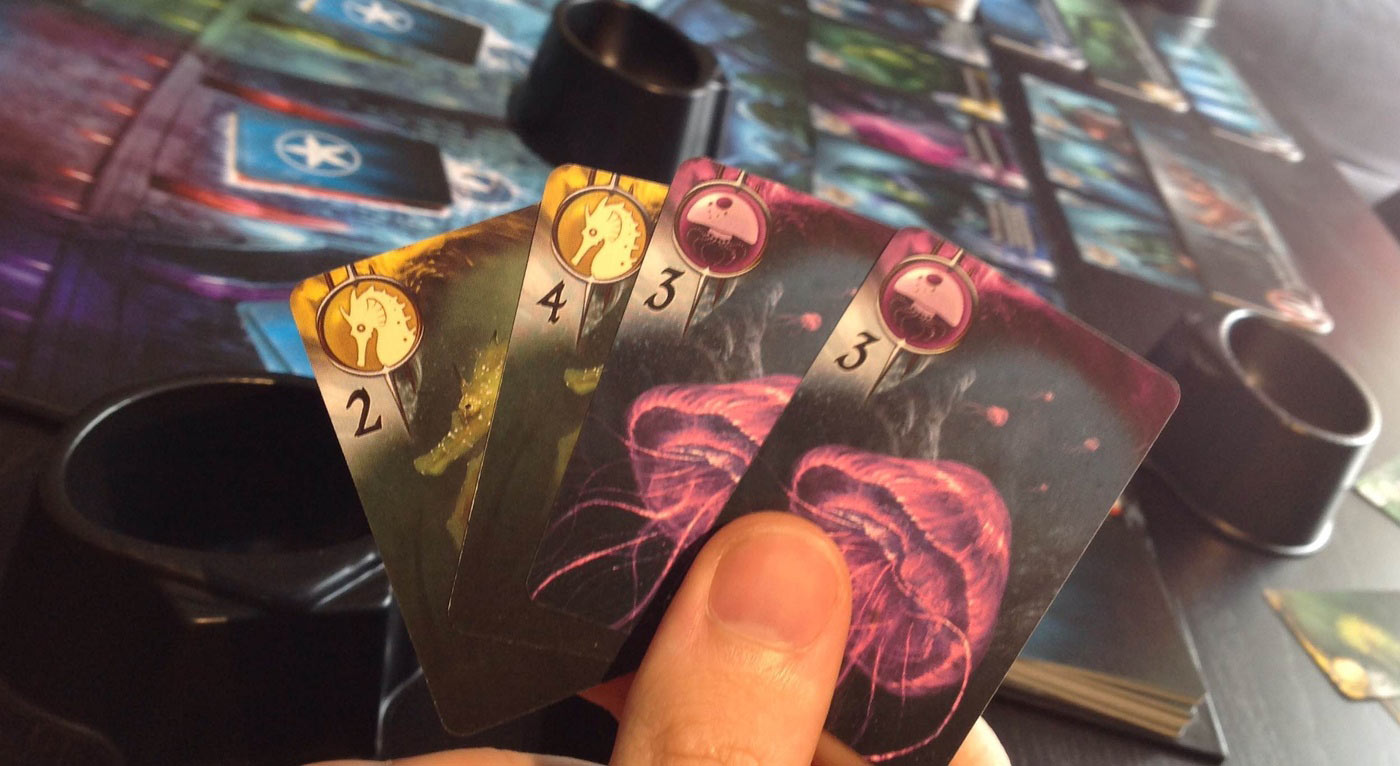 Quinns: Paul, you’re tracking water on the carpet and you’ve got a starfish on your forehead.

Paul: Oh! Sorry. I’ve been running around the undersea realm of Bruno Cathala’s Abyss. Don’t worry, though. Written reviews are rarely canonical so the carpet will probably be fine.

Paul: Well, it’ll be fine in the canonical universe. After this review finishes our story will return to the SU&SD godhead and this reality will, in all likelihood, be erased.

Paul: You know, like how I killed you in our review of Descent 2nd edition.

Quinns: WHAT? But I’ve still got so much to live for! I wanted a wedding-

Paul: Life is full of surprises, and so is Abyss! Let me get these barnacles out of my ears and I’ll explain. 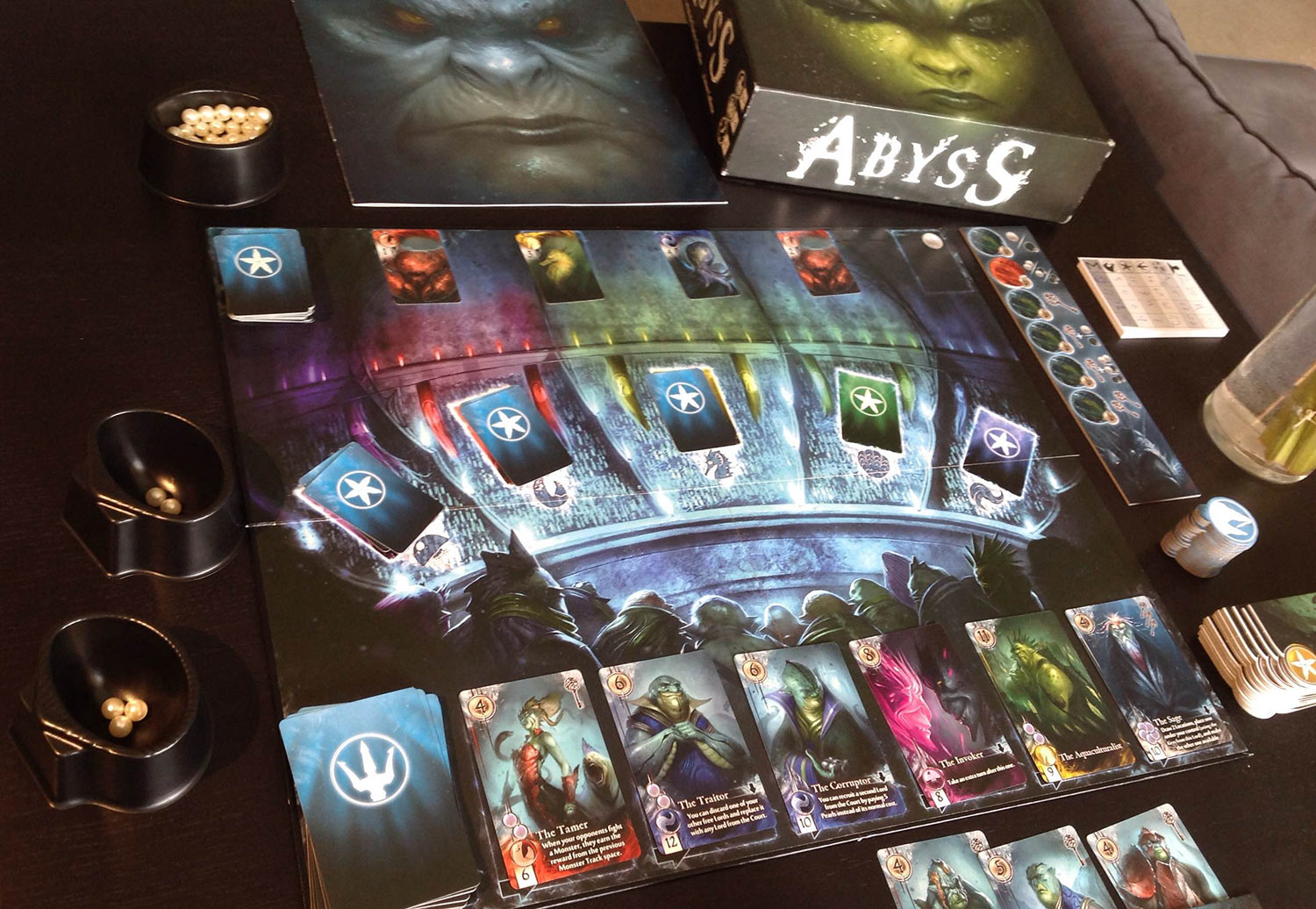 Quinns: Their cirri are reaching toward me and-

Paul: FOR EXAMPLE. It has a board, but it’s not a board game. It has beautifully impressive art and definite theme, but it’s not a thematic game. In fact, it’s possibly the most overdressed card game ever made. The strange and rather sad thing about it is that, only once a friend asked us about this world we were living in, did we realise that all of the game’s flavour text is crammed into a few tiny paragraphs on the back of the box. I still don’t know exactly what Abyss is actually about, but it definitely involves fish.

Anyway, let’s talk about the game itself.

Quinns: …Right. Players are all trying to gather political support so they can rule the sea. Much like in real life, this comes down to managing increasingly fishy resources.

The actual game comes down to two systems, both of which fit the wet, mystical theme about as well as a mouthful of flour, but they’re no less fun for that. 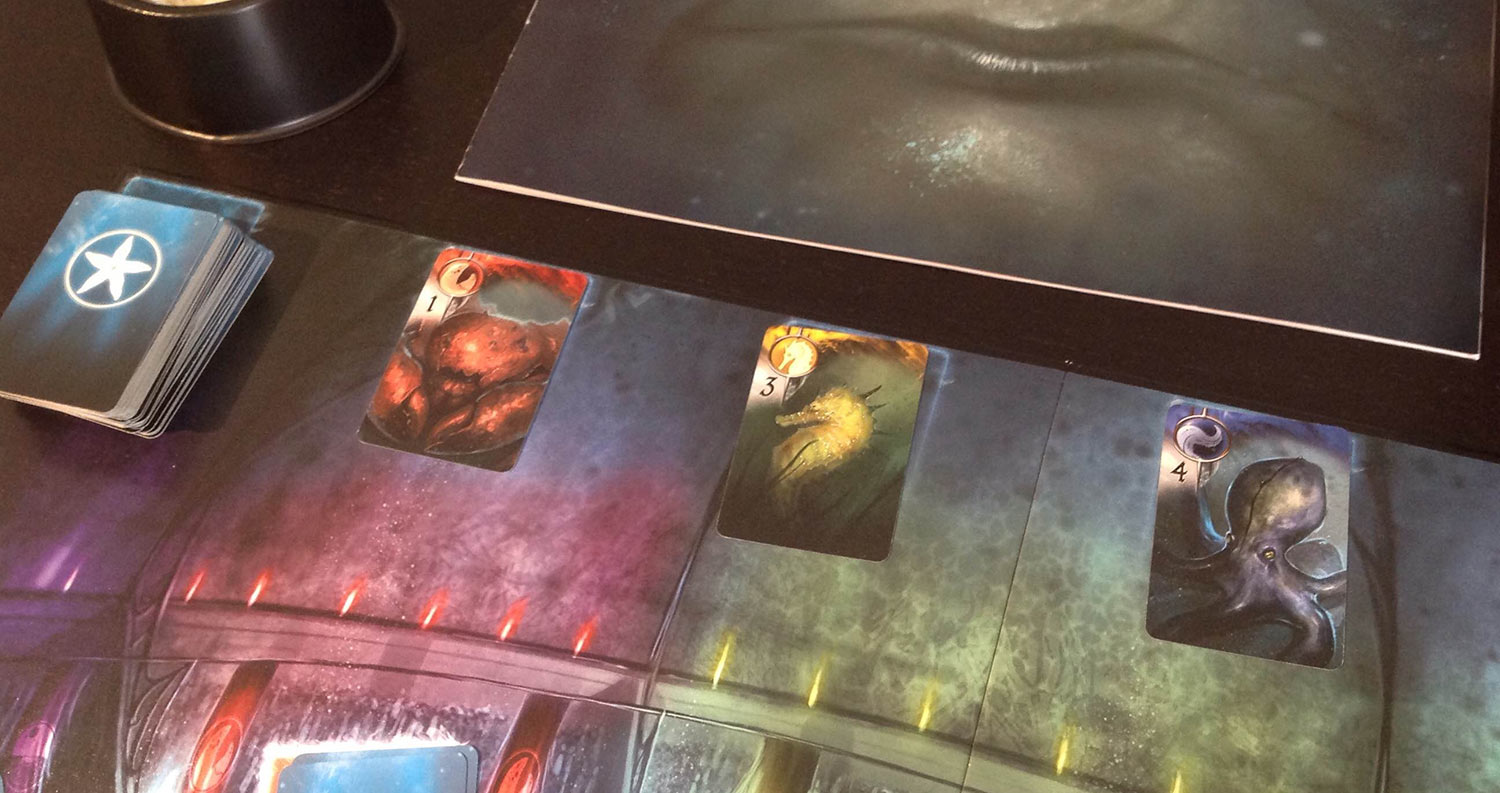 The first is that to get undersea creatures you’ll spend your turn “exploring”, laying out the cards you find one after another. Except (a) your opponents always get the chance to buy a card off you before you can take it, (b) the opponent who buys first pays one pearl, the second person to buy from you pays two pearls, and so on and (c) if everyone neglects to buy a card from you, you can always take it early to deny them the chance to buy anything. It’s a sharp, fun game that has everyone craning their necks over the crap crabs and sexy seahorses you’re turning over, willing someone else at the table to buy this or don’t buy that, please.

But here’s the thing. Anything that anyone doesn’t buy goes to “court” after you’re done, getting flipped down and added to (for example) a growing stack of crap crabs. On your turn, instead of exploring you can just take an entire stack of one creature, leading to groans from at least one opponent who was going to get all those reject jellyfish that had gradually been piling up, dammit dammit dammit.

Paul: Further complicating this fishy fracas is that of the Lords available to buy at any one time, each has a cost and a set number of denominations required, shown by the bubbles above the cost. So the below cheery Landlord needs at least 10 worth of creatures of two denominations, at least one of which is a shellfish. But once you’ve done that he’ll grant you 5 victory points and a shiny pearl every turn. EXCEPT, except, he also gives a key. And once a player has three keys they unlock a land, and that’s great! Except lands have their own tricky rules as to how to select them, and they cover up your powers. So once your Landlord, Tamer and Keeper are off in the Hall of Mirrors, they’re not helping you anymore. So you want lands… but not now. You want lords… but not just yet?

Quinns: Right. It’s about losing your carefully-selected abilities but gaining the victory points that will, ultimately, win you the game. Hopefully. Though you won’t win anything if you nerf your sea creatures too soon. Timing matters, just like it does when you’re exploring, or just like it does when you snatch up a pile of court cards. You’ve got to be quick, just like that shrimp that punches things really quickly. You know, the one there are all those videos about. Quinns: Sometimes when you explore, you’ll draw a card that represents an enormous, enormous sea monster. Beside the board, you’ve also got this track and your choice, when you face that sea monster, is to either advance the track one step further, or take all the rewards listed next to its current placing. If you’re exploring, with cards left to draw, you might want to push your luck, nudge that token along and see if you draw another monster card. Otherwise, you might just be setting up a prize for someone else to seize. Prizes include keys or victory points or pearls-

Paul: Pearls! We should mention the pearls a bit more.

There are pearls. Actually, that’s it, really. There are pearls that look a little bit like real pearls and you can put them in your pearl cup. They’re currency down here, under the sea, and if you swish your cup about then the pearls start circling around and around, like a minnow caught in a whirlpool. Then you feel powerful. Then you probably lose your pearl. I reckon about 5% of our last game was us just trying to find pearls that had bounced about the room.

Quinns: The pearls don’t actually do anything else.

Paul: No. But pearls.

Quinns: They are pretty, yes. So too is the board. Look at that board! Look at the card art! The cards that you find when you explore look quite nice. The Lords look even better! The lands look pretty good, too. Everything in Abyss looks good and it’s almost therapeutic to just stare at its… wetness.

There you are, under the sea (or is it in the sea?), gathering the cards you need to recruit your Lords. You search through the salty darkness or you preside over the saline court and… Actually, I still have no idea what’s going on here. Why am I doing this? Paul: Okay, so my first problem with Abyss is that I don’t know why these things are happening. I don’t know what exactly it is I’m doing when I explore and how this eventually has me buying the favours of Lords, nor why cards end up in the court or what the court even is. To some degree, I don’t care, because clearly I’m playing through a system here, and it has processes and whatnot, but Abyss is the most disconnected game I’ve played in a long time and that does matter.

What on earth is this about? Where am I? What exactly is happening? I feel like a basking shark, just swimming mindlessly through the depths, gob wide open, and taking everything I need without really appreciating what the point of it is. Beyond winning, of course.

Quinns: I don’t know about that. Perhaps because I was dropped a lot as a child, canvassing seahorses for votes makes sense to me. My problem with Abyss is that it’s slow. It’s full of wit, yes. There’s enjoyable pushing your luck, snatching cards from other players or working out clever combos of lands and lords, but the holdings you’re developing are constantly slipping through your fingertips. Lands cost you lords. Lords cost you creatures. Creatures cost you pearls. All for what? A thin quest for victory points that sees the game ending not with a bang, but with everyone getting their phones out to calculate whether they did okay. “Oh, you won? I thought I won. Okay.”

At best (which I’d say is when you’ve just started a game) Abyss is a decent card game with some of the most beautiful art this hobby as ever seen. But as your match approaches the one hour mark, then the 90 minute mark, it becomes increasingly obvious that the structure just can’t sustain that degree of attention. Your objectives start to feel limp, your plans feel wet, and that stellar presentation feels more and more like artful distraction. Paul: But we had fun playing Abyss, didn’t we? We had fun fishing deeper and deeper into those decks, snatching away our undersea acquisitions and grabbing big crawfish people and sticking them in the weird homes we bought them. We had fun. Though I’m not sure I’d say I was thrilled. Entertained, yes, but not thrilled. It felt almost like a very colourful Bohnanza to me. Under those swirling, sparkling waves are…

Quinns: …some very solidly packed sand banks? Abyss is fine, but it’s not as deep as it’s name suggests. You prise open that clam and there isn’t really a pearl inside.

Paul: Just one of these plastic pearls. Or it’s like one of house ships sunk to make an artificial reef. It’s not quite as good as a real shipwreck, nor a real reef, and-

Quinns: No it isn’t, and that’s a terrible analogy.

Quinns: You know what’s a good, gorgeous and much grander game of I collecting and arranging sets of cards?

Paul: Mundus Novus? Oh, and 7 Wonders! And that also has a sea theme, as the seven wonders of the world were the Lighthouse at Alexandria, the city of Atlantis, The Titanic, Celine Dion’s Titanic Song, the Waterslides of Butlin’s in Skegness-

Quinns: Paul, Is that a sea cucumber in your pants?

Paul: Ssshh, a board gamer’s depths are an ocean of secrets…