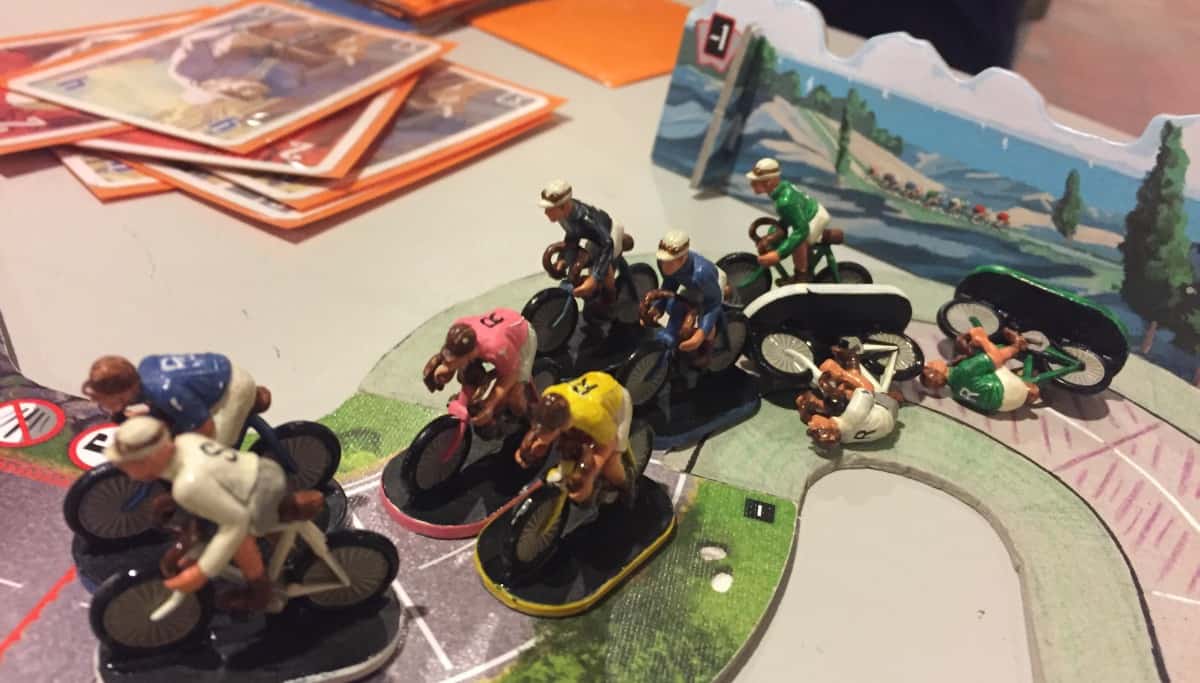 Ava (they/them): Oh dear. The bosses took a break to get rotten in the state of Denmark. Specifically, they’re attending the Fastaval gaming convention, and only dropping the occasional cryptic photo (see above) into the company Slack.

That means I’m on my own for this week’s games news. They shouldn’t have left me alone. I don’t know enough of the news-ropes to not pick a random sentence, append the word news to random bits of it and pretend it’s an intro. 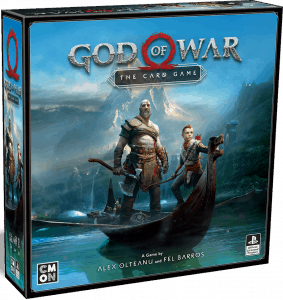 War Dad, or as some call it ‘God of War’ is a video game about having very large shoulders. I grew up with nothing but my eldest brother’s Games Workshop manuals for company, so I’ve seen an over-sized arm-helmet or two in my time. Shoulders aside, CMON is making a card game based on the War Dad saga. Judging from the cover, it’s about standing on a boat and ignoring your family in the hopes that they’ll eventually take the oars and do something useful.

What grabs me here is their mythological excuse for throwing combinations of heroes at a card mosaic representing monstrous enemies and mysterious scrapes. You play the Norns, weaving the fabric of fate to try and prevent the end of the world. This means choosing cards, picking quests, and building decks. My sooth-says we’ll need more details before we can figure out the warp and weft of it. 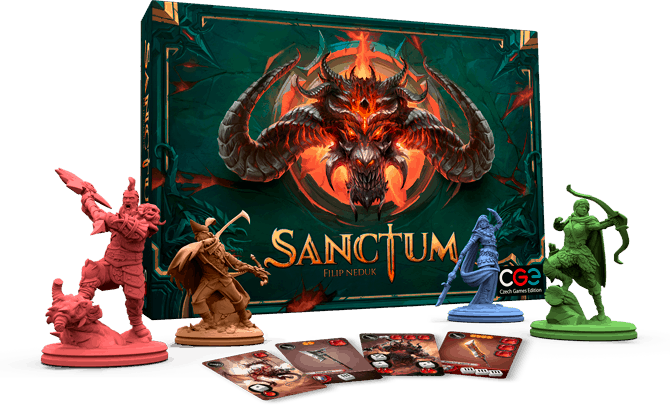 Also taking inspiration from video games is Sanctum. Czech Games Edition is following up on it’s first-person shooter Adrenaline with an interpretation of the rapidly clicking, number increasing action RPG genre of games exemplified by Diablo. It’s pretty bold to take some of the fastest, most overwhelming ideas from computer games and translate them to the slower medium of cardboard and plastic. I guess el diablo (it’s Spanish for ‘the diablo’) is in the details.

After spending the last news highlighting the problems of colonial games, I feel a bit awkward wanting to talk about forthcoming war game Our Place in the Sun, but I’ve not stopped thinking about it since it cropped up in the BoardGameGeek news.

This card-driven political simulation is unlikely to be welcoming enough to warrant a recommendation from this site, but it’s a fascinating idea. Taking the 1871 treaty of Versailles (no, not that one) as a starting point, the game features European empires vying for prestige while engaging in the brinkmanship and precarious alliances that led to the wars that shaped the twentieth century. The kicker for me is that the political situation might not develop into the First World War. Whether your statecraft is good enough to prevent it or not will affect how you should be trying to win. Splendid isolation is all well and good if the continent doesn’t set itself on fire around you, but if the Archduke hits the fan, you’ll be wanting friends.

The subject matter is grim, reducing colonial endeavours around the world to opportunities for point-scoring, but this is a pretty honest view of how the powers of the era saw the world. The lives and livelihoods they devastated were as good as irrelevant to the games they played with the world. It is bleak, but this looks like a unique window on a period of history that doesn’t have enough light shone on it. I go back and forth on whether board games are a great place to look at systemic historical problems, or too blunt a tool to help learn. Hopefully this will be nuanced enough to make it worth it. If nothing else, every wargame I’ve ever played has left me with a nagging need to find out more about the period. 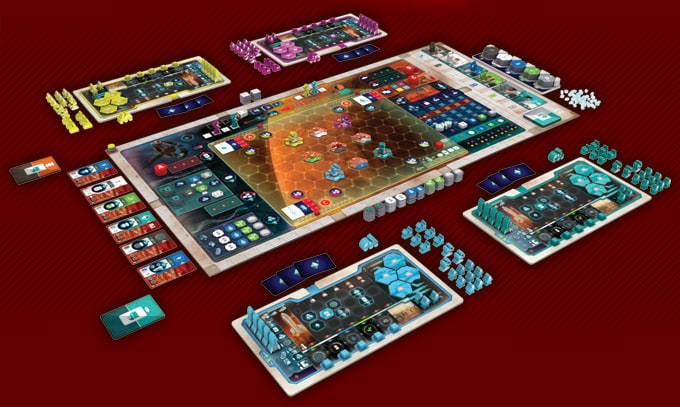 Kickstarter appears to be pretty over-excited about Mars right now, with Vital Lacerda’s vision of martian colonisation taking to the skies at the same time as Terraforming Mars’ latest expansion (discussed below).

On Mars looks pretty, complex, and drowning in moving parts. This is exactly what I expect from Lacerda, who seems to have a thing for great clunking machines. I was disappointed in Lisboa, after finding the different cogs didn’t click together as pleasingly as I’d hoped. That said, I’m appalled to find myself criticising any game that has you collecting wigs while you rebuild a flood/fire/earthquake battered city. Hopefully On Mars won’t have me quite so conflicted, but there’s no way I’m going to be as excited about ‘Opportunity Points’ as I am about wigs.

Meanwhile, Terraforming Mars: Turmoil takes Terraforming Mars and adds politics, intrigue and ‘global events’. These might be exactly the right kind of spanners to throw into your scientifically believable machines. Turmoil describes itself as ‘the most gamer-focussed expansion yet’ which, frankly, makes me feel a bit sick. Probably not the sort of turmoil they were looking for.

I liked Terraforming Mars’ engine building space adventure quite a lot, for its mundane but astronomically authentic storytelling, so I’m quite keen on more space toys. I’m not confident this will be as smart as the Prelude expansion, which added a few choices to the start and shaved enough turns off the end to make everything play a bit tighter. Turmoil could easily add that bagginess back in in the form of what looks like an area control political minigame, but it’s always hard to tell when more is less. The kickstarter comes with some recessed player mats and even just that is quite tempting, as the games’ billion resource-tracking cubes are incompatible with wonky tables and dramatic sleeves.

If you missed SU&SD’s review of Terraforming Mars, you’ll find it here. Don’t miss it if you want to see Quinns and Matt drinking algae.

I know that SU&SD’s Blood on the Clocktower review caused a bit of upset, and people seemed particularly curious to find out how it was different to Werewolf. You might find some answers in this podcast from Tuesday Knight games, where Clocktower designer Stephen Medway, talks to Alan Gerding, the designer of another unique kickstarted social deduction game: Two Rooms and a boom. There’s a lot of enthusiasm and a little swearing in the podcast, so your mileage may vary. My highlight was finding out that Quinns’ initial reaction to the prototype was ‘this looks shit’, but within an hour and a half he was singing praises from the rooftops. There are also now several playthrough videos from the designers (one of which is embedded above) if you’re still hungry for detail.

I’ve not have a chance to play it yet, but I do hope Quinns will let me have a bash at his copy at some point. I’ve always loved a good grimoire.

Ooh, ooh, something caught my eye at the last moment.

The Belonging Outside Belonging game jam finished up over the weekend . I think the ‘no dice, no masters’ structure of Avery Alder’s Dream Askew is the most exciting simplification of role playing game mechanics I’ve seen in years. Avery’s talk at NYC Practice about the design process (embedded above) had me overwhelmed with inspiration. I can’t wait to see if this mode of making stories can have a similar impact to Apocalypse World or Blades in the Dark. I will definitely be taking a look at some of these jam entrants to see if any of them are quite as magic as Dream Askew’s apocalyptic queer communities. Sorry, this is the second week in a row I’ve been fan-perling* about Avery, I just think she’s doing amazing stuff.

*Okay, I might be making this word up, but there’s no decent diminutive of person, and there’s something cute and useful about having an non-gendered alternative to girl/boy. My preferred neologism is ‘perl’, as a cute slightly femme form of person. I’ve seen people use ‘per’ and ‘boi’ as well. There’s a whole load of different ways to be non-binary, and playing with language is fun. 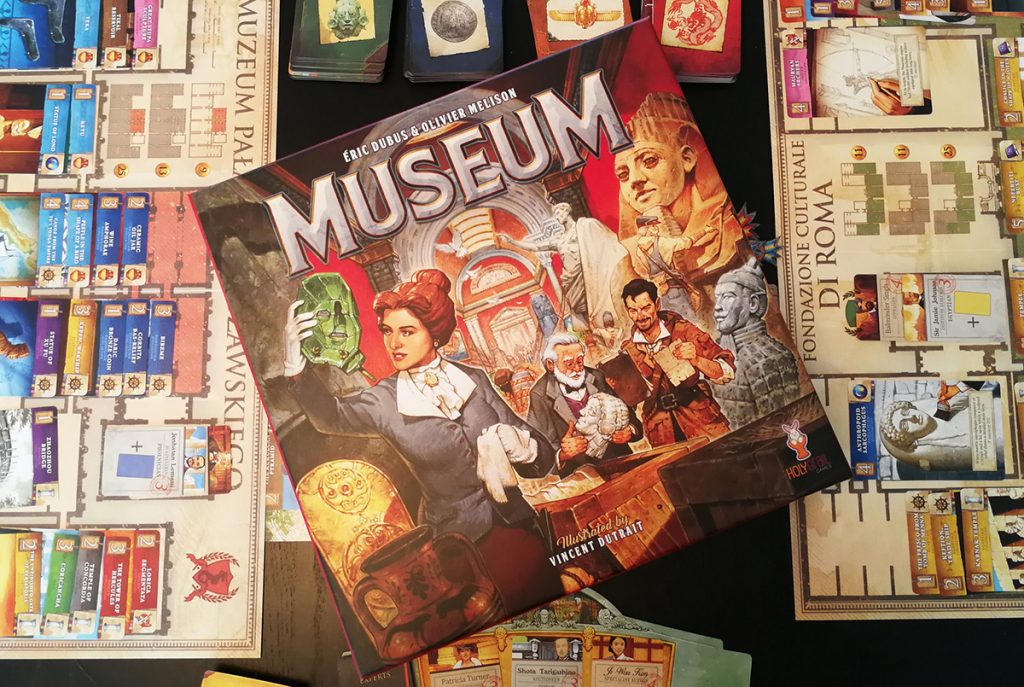