Paul: Hello and welcome to a very fresh and very exciting Games News! Today I shall bungee from the precipice of journalism deep into the chasm of news, bouncing back upward with only the most thrilling of scoops, the choicest tidbits of board game gossip, the tastiest morsels for your so very particular palate. Does latter suggest that I’m actually dropping out of the sky to snatch at food, like a snickering seagull? Well, I suppose that would be the killjoy’s way of putting it.

Anyway! Let’s kick off with some good old-fashioned wooden chunks.

I believe we missed out on Orléans first time around (the first run sold out fast), which might have been a shame as it looks like the sort of fibre-heavy euro-trading-wood-and-cardboard fare that rounds out our organic and so very bourgeois diets these days. I’m now slightly ensorcelled by this game as news reaches us of more copies roaming in the wild alongside a new expansion, Orléans: Invasion, which adds both a bunch of new scenarios and new solo challenges (that sounds like a lot of ways to play the game), as well as a very sexy deluxe edition doing the rounds, featuring metal coins, special stickers and wooden wheels. Wooden wheels! Was there ever a better time for trading in that most beautiful of medieval French cities, forever beholden to Joan of Arc? This might be something I have to catch up on. 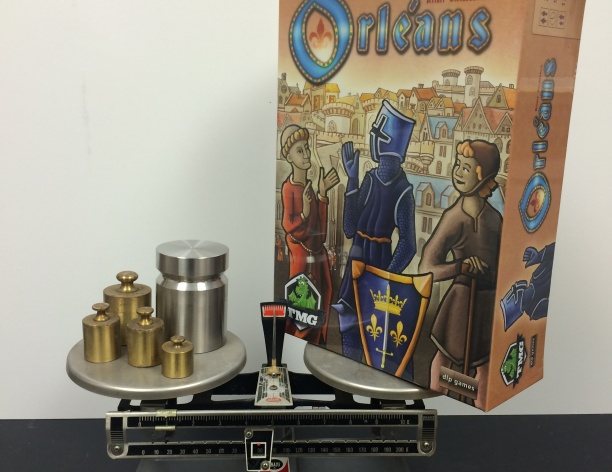 That whole luxury kaboodle weighs in at an impressive 3.1 kilos or, for those still using measuring systems actually from the time of Joan of Arc, 6.8 pounds. 6.8 pounds! Why that’s as much as several bushels of wheat, m’lord! Enough hay to carpet your stables, sire! It’s worth its weight in pig iron, I’m sure. We must send word to the bishop! Maybe he’ll give us his blessing and your pustules will finally be cured.

Away from the earthly temptations of such throbbing tactility and upward into Aquinas’ realm of ideas and concepts and heavenly judgement, we have a little bit of legal news that Quinns was flirting the idea of reporting last week and which I have decided to spread out in front of you like so much information butter. This is an interesting one, too. Back in 2014, the publishers of the so very exclamatory and classic cowboy card game Bang! launched a lawsuit against the publishers of the functionally very similar Legends of the Three Kingdoms, after the latter released a game with almost identical rules. Are we about to hear the ding from the diner kitchen that suggests justice has been served and plagiarism has been punished? Actually, no.

According to BoardgameGeek’s very circumspect news blog, it turns out that copying someone else’s game mechanic is, at least according to US law, actually okay and not a violation of copyright. “A particular bookkeeping system was not copyrightable,” is one of the key lines in the recently released legal ruling or, to put it another way, “Once a game has been made public, nothing in the copyright law prevents others from developing another game based on similar principles.”

In fact, it looks like copyright law is much more concerned with the “artistic or literary content” of a game than the mechanisms behind how it works: “Unlike a book or movie plot, the rules and procedures, including the winning conditions, that make up a card-game system of play do not themselves produce the artistic or literary content that is the hallmark of protectable expression.” I disagree, but there you have it. If you ask me, it’s a little disappointing to hear that and, legal or not, I wouldn’t ever want to be a copycat.

Onward and this time back downward again, down toward something that’s the complete opposite of copying and cats: dinosaurs. It’s so often the case that we’re keen to see board game Kickstarters do well, but we don’t then review them because, well, if players can’t get hold of them when the game is done and every existent copy has already gone out to someone who pre-bought it, we’re covering something nobody can get or everyone interested already owns. Which is why I’m happy that it looks like The Great Dinosaur Rush is being made more widely available. 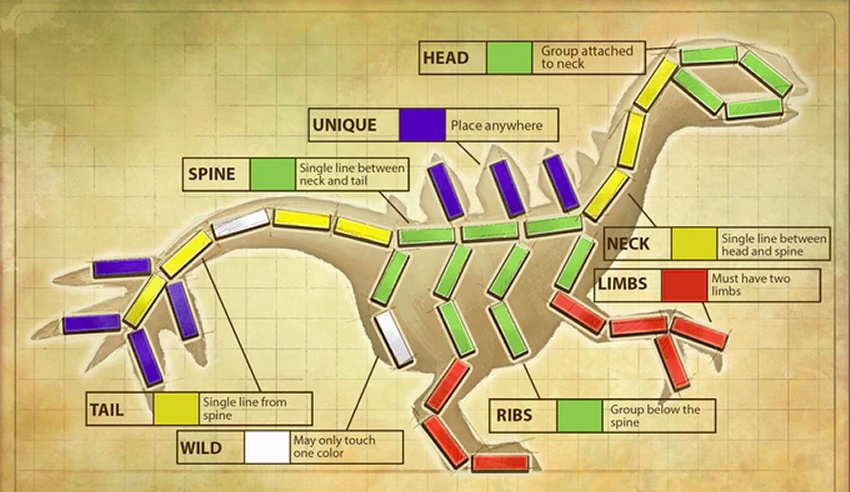 Why? Well! This is a game in which you scavenge for dinosaur bones and, piece by piece, covertly assemble them into what is basically a larger and angrier version of an ancient chicken, scoring points based on how big and fierce these extinct extroverts look. I really like the idea of secretly Lego-ing a lizard together and if anyone out there has played this, in any form, I’d love to hear what you thought of it.

Okay, what’s next? Well I guess if we’re already dipping our dirty beaks into the Kickstarter bucket, we might as well see what else we can bite into. Inevitably, with another month comes another grandiose, miniatures-related, million dollar success. Massive Darkness is not what I would name a board game if it was up to me, but I can’t criticise because it looks like Cool Mini or Not have (again) filled a massive wallet with a massive amount of money. As I write this, they have raised more than one and a quarter million dollars and the figure keeps increasing in front of my very eyes. 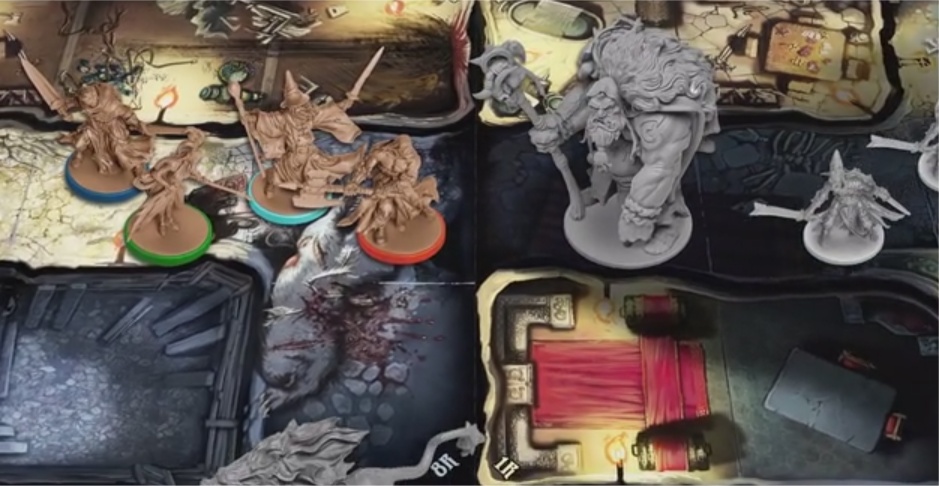 This is another elaborate-to-the-point-of-possibly-being-overwrought dungeon-crawling-generic-RPG-stab-slash-monster-magic-fest, so the real question is how it will measure up again Shut Up & Sit Down fantasy favourite, Descent. Massive Darkness has a massive amount of things in it, including all sorts of character customisation, monsters, modular dungeon tiles, custom dice (be still, my jackhammering heart) and even an interesting stealth mechanic that allows for sneaking and backstabbing. Oh, and nobody in charge of the monsters. No, they run themselves, which means you can also adventure solo, if you’ve made that classic mistake of accidentally cooking and eating all your friends. Here’s another picture!

If that doesn’t quite lather your scabbard, there’s another addition to the good old Dungeons and/or Dragons stable coming in the form of Assault of the Giants, which will have you sending your very big people to bully settlements for food and treasure before, presumably, scurrying back up their beanstalks in time for the afternoon cartoons. The miniatures here, WizKids insist we know, measure between four and five and a half imperial inches, should you just happen to be the sort that thinks size matters (it doesn’t), or believe you’re ever going to impress anyone with how you maneuver your four inch giant (you’re not). I’m sure there’s some sort of joke to be made here (there is), but I’m not going there (seems I already did).

Goodness, this Games News is bloating. As the cord slackens and I find myself penduluming through mid-air, there’s just enough time for me to gesture wildly at a few other bits of interesting news. As the dust settles from last week’s exciting and engaging UK Games Expo, the stats show a huge increase in the con’s popularity. Unique attendees rose more than 40% (excellent!) and over 25,000 visits means this is now (I believe) the fourth-biggest board games con anywhere in the known universe.

I’m delighted to see this. We had a really, really good time there and saw a whole host of people old and young, British and foreign, men and women, enjoying board games together. While there were no new standout games for us, the event had a lovely atmosphere and it’s wonderful seeing the hobby grow like a well-loved root vegetable (and, who knows, maybe next time I’ll finally bump into beaming Sixth Doctor Colin Baker, star of two of the most terrifying Who serials that gave me trouble sleeping a long, long time ago). 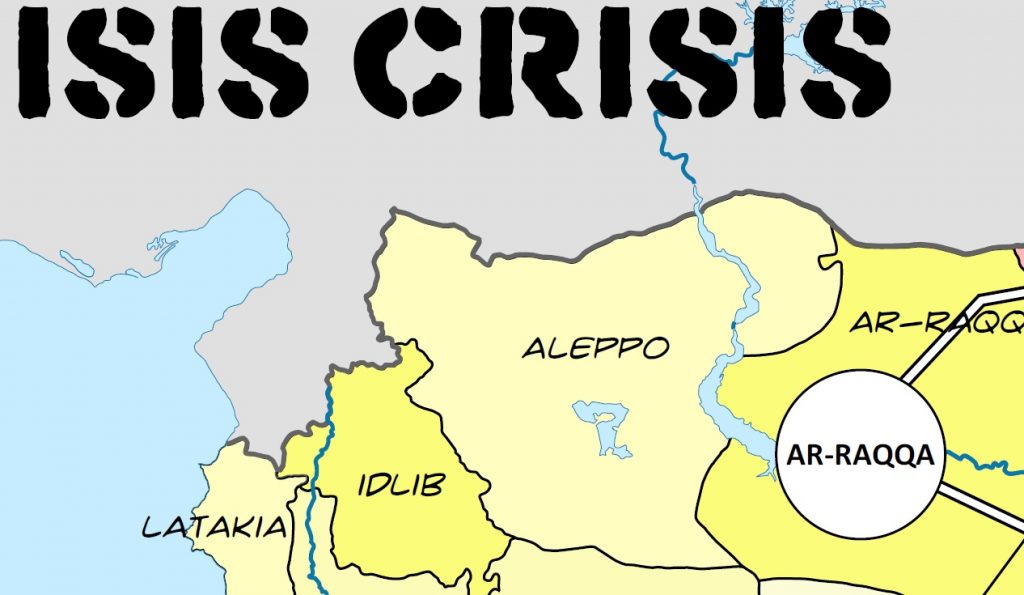 Hmm, what else? Oh yes, CBC reports that the Canadian military has been using board games to help them with training and planning. Of course, armed forces using various sorts of wargames is nothing new, but as war changes, so too do the games and the exercises that they experiment with. According to CBC, Colonel Ross Ermel says these games help the military “think outside the box” and we have no idea if he meant that as a board gaming pun. You can find the game they’re trying here.

Finally, finally, let’s finish with some free stuff! I know you all love free stuff and I certainly do myself. In fact, I specifically avoid keeping any gift horses in my house precisely so that I don’t accidentally look into one’s mouth, so drawn is my gaze toward equine gnashers, gums and tongues.

What’s free, you ask, as I make one last swan dive into the gully below? Why, RPGs, of course! This coming Saturday is Free RPG Day. Scavenge all that you can and come back to tell us about whatever paladins or police officers or paragons you’ve rolled up, roleplayed or inevitably run into an early grave. 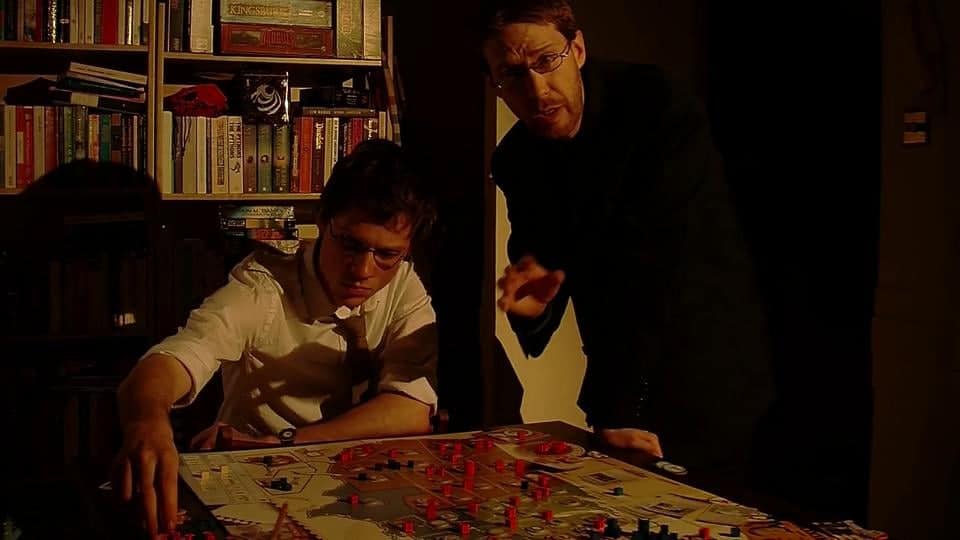 An apology, a look back at an old review, a breakfast calzone 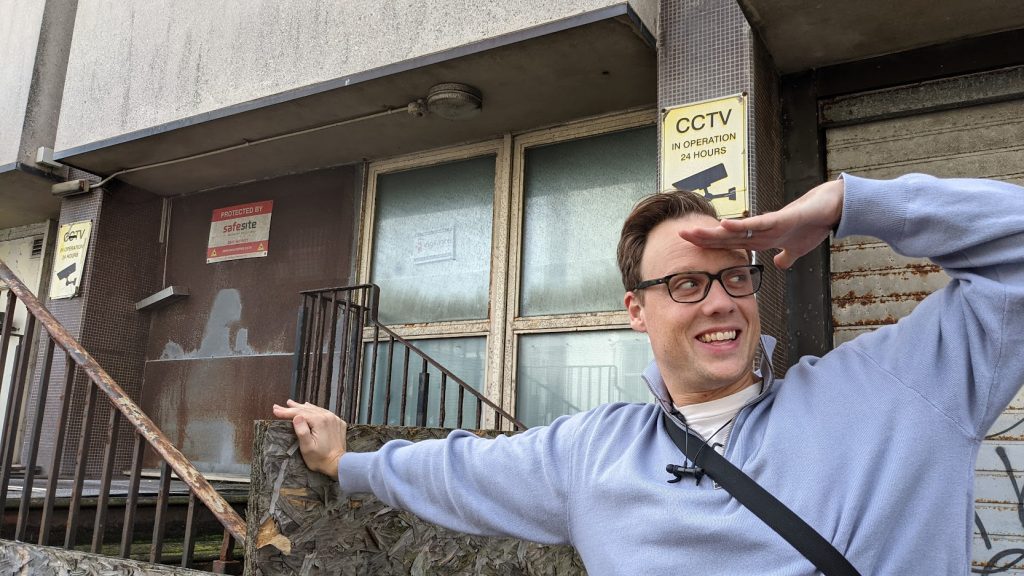