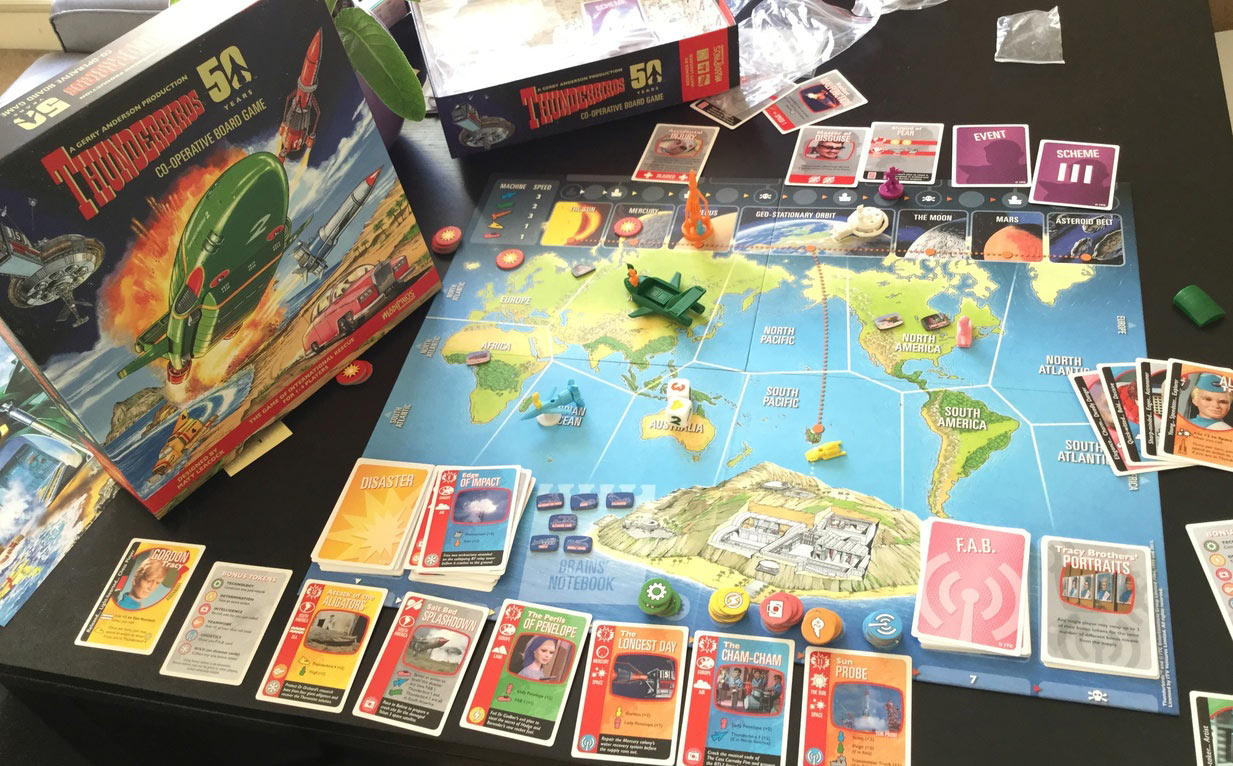 Quinns: Leigh! Thank you for joining us for this review of the Thunderbirds board game, although as you’ve never seen an episode of 1960s TV series you won’t be allowed to talk. You can nod along, though, and say things like “Wow!”.

Leigh: What? You told me you wanted me here as a counterpoint, reviewing this game as someone with no interest in the show.

Quinns: Yes, but I’ve changed my mind. Some things in life are sacred. God, for example, and tea, and the exploits of the Tracy brothers and International Rescue.

Leigh: I mean, I actually have learned a lot about Thunderbirds from playing this game. It’s about boys moving boats and planes around the world and swapping a pink woman among the different vehicles. And then one of them is a tragic space exile. It’s really monstrous.

Quinns: There will be time for me to explain the many and varied ways you are wrong. For now, let’s review!

Thunderbirds: The Co-Operative Board Game is a design from Matt Leacock, of Pandemic fame. Which is lucky, because if it were designed by anyone else it would be a cheery facsimile of Pandemic. Here? It’s a loveable spin-off. Though quite a lot’s changed!

As in Pandemic, each turn something goes terribly wrong in a certain part of the world, and each player gets a small pool of actions to move and/or try and fix this unending parade of disasters in an efficient way. Unlike Pandemic, though, with its delicate cardplay and reproducing cubes, here the puzzle is in trying to manage a pool of pilots, vehicles and tokens. Moving is an action, but swapping characters and equipment between them is not. 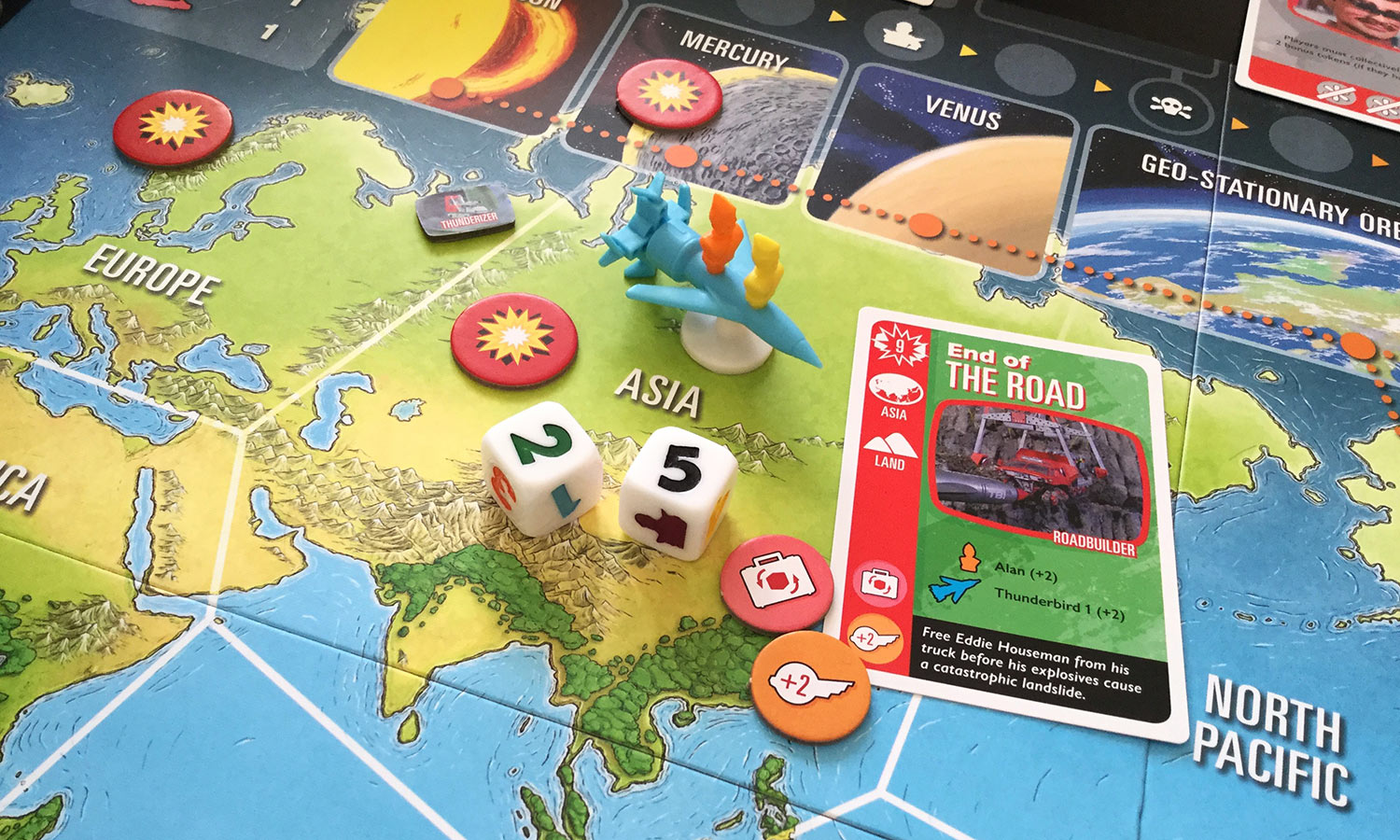 And this is the rub. Any player can attempt any rescue in this game, BUT different characters and vehicles offer different bonuses. So the game is a constant risk/reward proposition. You could try and rescue those oil rig survivors from your rocket! It’s going to suck, but if you manage it you’ll have bought yourself precious time.

Leigh: Playing this so soon after our epic game of Pandemic: Legacy, I definitely noticed the similarities: It’s you and me, plotting as best we can against the capricious whim of drawn cards and the onward march of time — in this case, the onward march of The Hood, who I gather is the bad guy and does not have a hood on at all.

Every time we put a boat inside a car and then went to space to leverage our sad space exile brother for a better dice roll, you kept saying This is just like Thunderbirds. You definitely got a boyish enthusiasm out of the classically-hued plastic components, and screwing a tiny Tracy peg into a little Tracy jet plane. I liked making you go rescue people from underneath the Empire State Building while I got to go around the world with Penelope in my yellow boat. I felt the clear nostalgia factor to this game, and I wasn’t even around when it was on.

But neither were you, really! 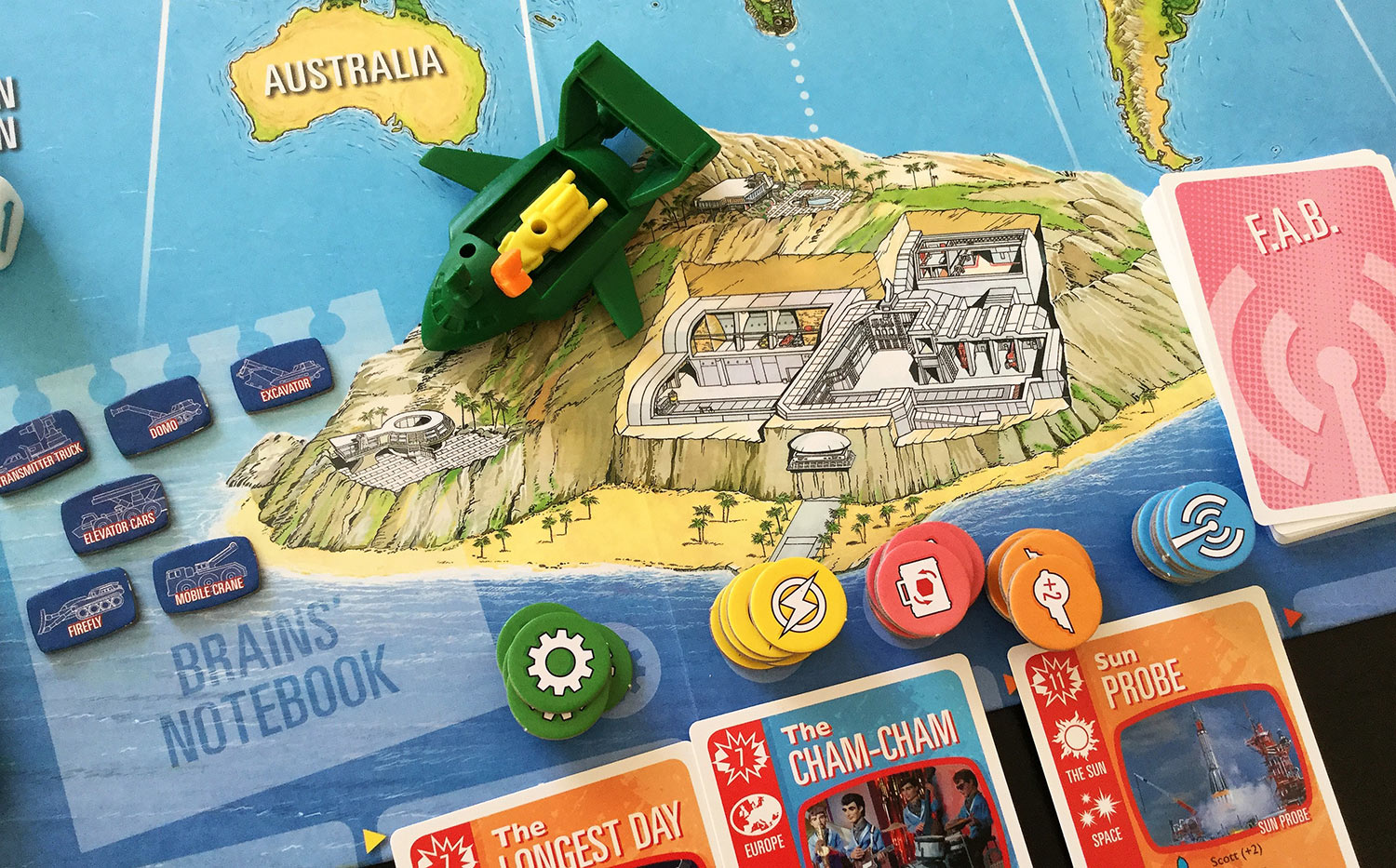 Quinns: I had a single Thunderbirds VHS tape growing up, but the shape of its vehicles and the show’s stirring orchestral theme still managed to burrow into my subconscious, not unlike The Mole, a beloved pod vehicle for Thunderbird 2. I still think about it a lot. Here’s what I wrote in the Games News when this game was first announced:

“Looking back, Thunderbirds is interesting for its bizarre “supermarionation” puppetry (which would later be re-visited in Team America: World Police), sure. But it’s more interesting for being the product of an age that had yet to grow tired of engineering or wary of money (Thunderbird 1 literally launches from the pool on the patriarch’s island resort).

“I mean, compare it to the modern “billionaire hero powered by technology” of Iron Man, and you can see just how inward-facing we’ve become. Tony Stark’s technology is nothing more than the clothing of the man himself… In comparison, the vehicles are the stars of Thunderbirds. It’s vehicular pornography, all straining conveyor belts and the whining of engines.”

Leigh: Yes. It strikes a very particular kind of appetite-chord. Almost like you’re seven years old again, quietly “vroom vrooming” with your toys on the kitchen floor, utterly optimistic and secure. It seems almost luxurious, this concept of an era when having a private island and your own rocket was no threat to anyone, but in fact represented a shining moral potential. No nations are worried about the Thunderbirds private military capacity; they just use it to literally rescue people from alligators and that’s it. 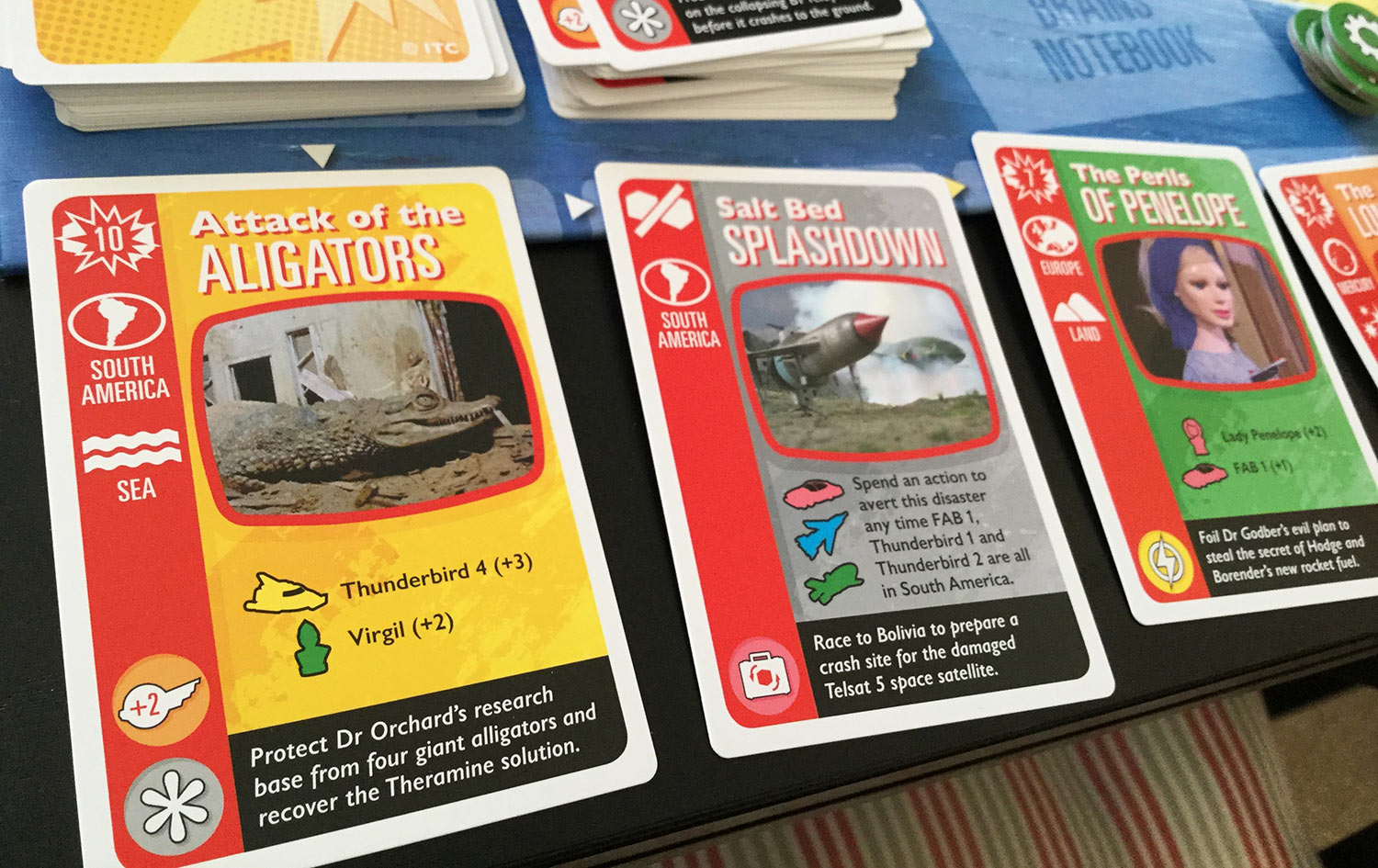 Each “disaster card” in the game corresponds to a different episode of the series. So you’ll see the card, the dice roll required to avert it, and the criteria for bonuses against that roll, like having an invention on a certain continent or doing it in a certain vehicle. And then there’ll be a picture of a puppet trapped up to his neck in a sandpit, or something, and some text about what’s going on. I got a real feel for what I was missing.

But ultimately it was really just light flavor, to me; I was just mostly thinking about what we needed to collect and where we needed to be. And feeling sad about JohnTracy, who stays in the Space Station on the Space Track. I looked him up and he loves running, climbing and exploring, but actually he has to sit in a space station all the time. Even though being in space degrades the bone quality. Also, their dad commands them around the world from a private island, but, like, what happened to their mom?

Quinns: She’s dead! Which, again, lends a sinister undertone to the show. A dad and his five sons flying around the world, saving people, and smiles and martinis, but the one person they can’t save… is their mum.

I guess this game merits a deeper discussion of theme than SU&SD usually offers, since it’s what literally everyone will be buying this game for. To that end, after playing this I don’t think Pandemic was the best foundation for it. The global board is too distant. The end result is that this isn’t a game of saving people, it’s a game of using Thunderbird 1 to solve a crisis in Africa (“What was the flavour text again? What am I doing?”), flying to Europe, then solving a second crisis on the same turn (“Ooh, that’ll give me a +2 token that’ll let me solve that Sun crisis next turn.”) 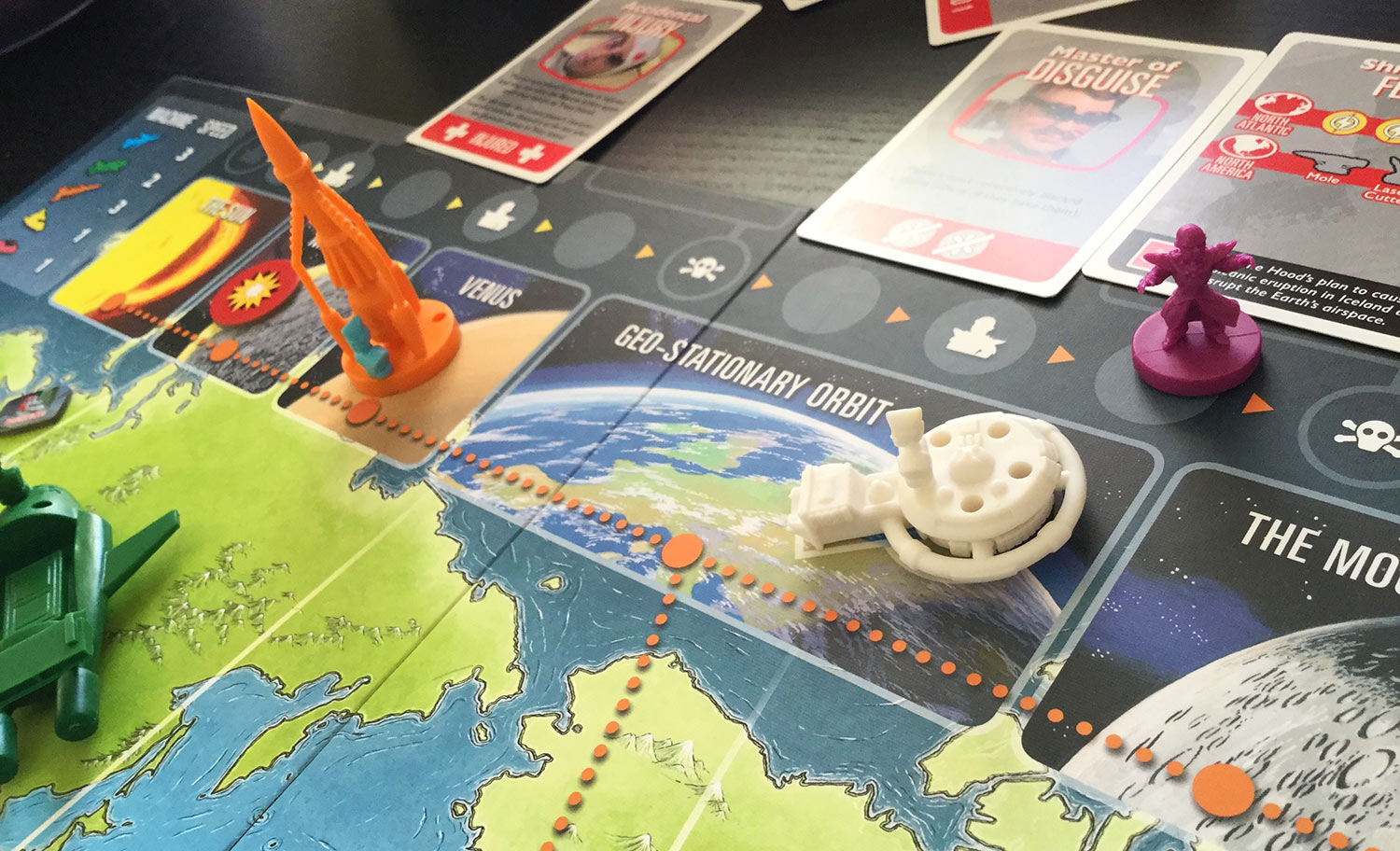 You’re too distant for any drama. I’m not using Thunderbird 4 to rescue a guy from an alligator, I’m wondering where to park it so you can use it next turn. You joke about spending the entire game with Lady Penelope all to yourself, but that’s all she was! Cargo that occasionally changed an integer for the better.

And distance is fine in Pandemic, because its imagery – disease outbreaks, chartered redeye flights, searching for a cure – is evocative without assistance. Thunderbirds, for all the pomp and globetrotting of the series, is as personal as the themes of Pandemic are global. Thunderbirds is a puppet, dabbed with sweat, wrestling with his machine to rescue one guy stuck in a mine. And this game doesn’t offer that at all.

Leigh: Yeah. And as for the game, it felt far more fiddly to me than Pandemic. On one hand that was sometimes cool; more surprises, as the anxious circumstances you forward-planned for could be alleviated completely just by the luck of the draw. But ultimately it just felt like a trot through constantly-moving parts.

Quinns: Some literal moving parts, too, with the need to constantly unplug the little plastic pilots from each vehicle. That gets old fast.

Leigh: I liked the pilot-plugging; it was the bit that most deeply plucked the heartstring of my childhood memory. The top comes off of Thunderbird 2 and you can carry other vehicles and inventions in it! But yes, the cargo-Penelope, the utilitarian Space-John — all the wonderful little things I imagine about Thunderbirds felt like they were just peering at me through this game as if through glass, without ever quite coming through where I could touch them. 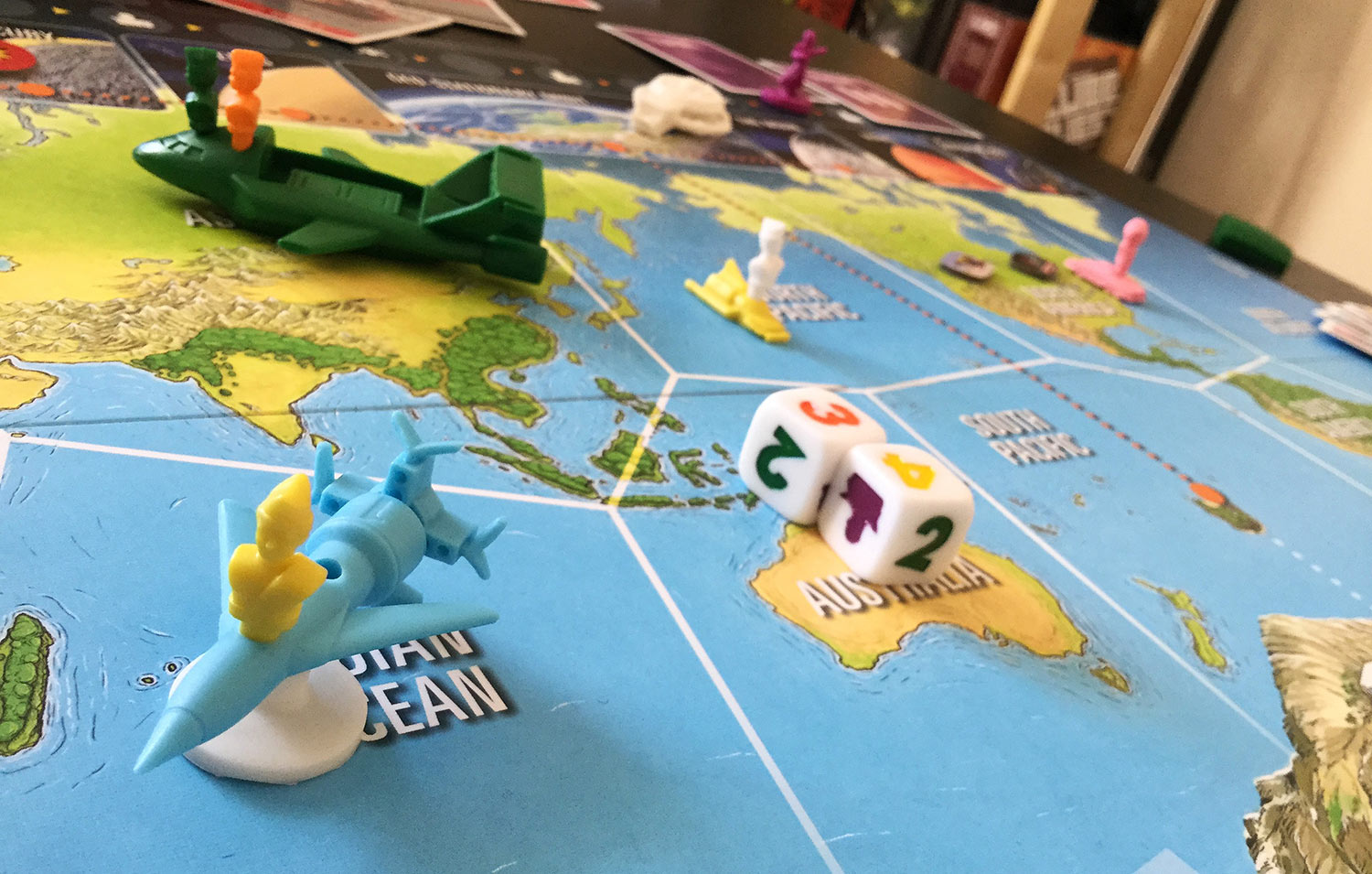 I kept wondering who the target audience for this game really is. People our age who are “nostalgic” for this era we’ve never quite experienced, right? But I worry it might not be a satisfying-enough experience for people with our vocabulary — and at the same time I also worry dads will get it for kids, or young people will be attracted to the puppets and toy planes (as, arguably, they ought, with the wonderful, warm messages about heroism and cooperation!), and then it’ll be a bit too strict and fiddly to make sense for them.

Quinns: It’s a good question. As a game it’s an inarguably less strong version of Pandemic, and as a Thunderbirds game it’s incapable of generating those squeals of fangirl / fanboy joy that come from the Battlestar Galactica or Game of Thrones board games. Oh my god Starbuck is the fleet admiral and is using up all the nukes, I CAN SEE IT, I CAN SEE IT IN MY MIND, IT’S BEAUTIFUL

Leigh: Yeah. As a huge Thrones fan I could go on for ages about how delighted I was to immediately see how the different deck styles supported the theme of each House, and each character within that house. When it comes to Thunderbirds, the only difference among the brothers’ pegs is the color, a small bonus to various challenges and the ability to generate different tokens. I was just going to assume the show isn’t that deep and that maybe they are all identical Ken dolls, but then you told me about how episodes end with the family celebrating on their wonderful island with martinis while Space Exile John just kind of Skypes in on a TV screen, left out. God that is so sad. I can’t get over it.

Quinns: Yeah. The best thing I can say about the Thunderbirds board game is that the balance is excellent. It was consistently nerve-wracking and a rewarding challenge to solve. But that doesn’t help when the very first choice this game offers is whether to buy this, or the superb Pandemic Legacy. And that’s not a choice at all.

Leigh: Is that really the decision all your readers will make, though? Maybe some people aren’t that into the Pandemic thing, but would just like an eminently playable novelty Thunderbirds game instead. Maybe they would like to have it in the house for guests that aren’t normally into board games but are into kitsch.

That said, playing Pandemic Legacy with you was one of the most mindblowing board game experiences I’ve ever had. I went around and exhorted all the people from the video games-only world to make it their first board game, as it had such great twists and turns. Wow. Apparently I can’t rightly tell folks to buy Thunderbirds instead of Pandemic Legacy, either.

Quinns: We can tell them to buy this, though! 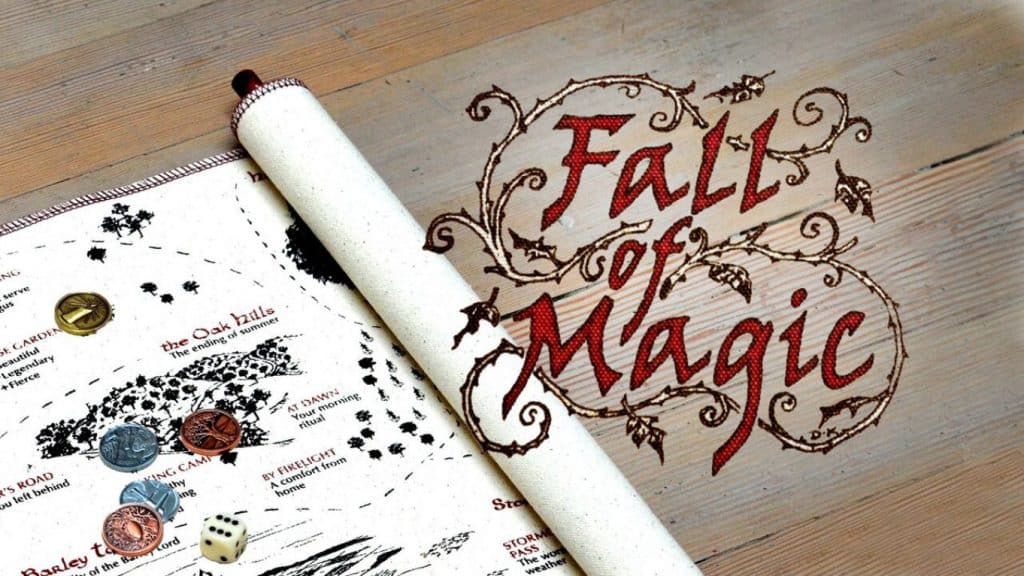 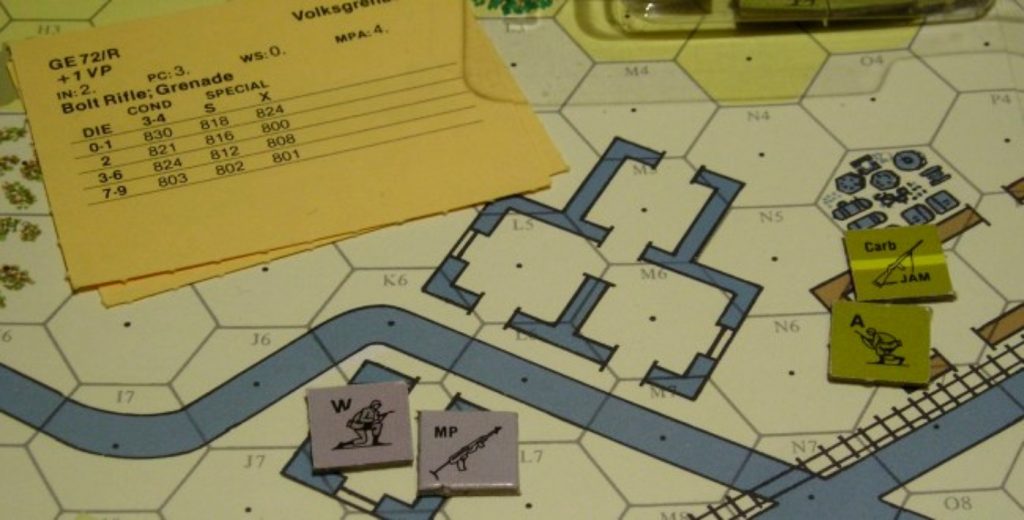