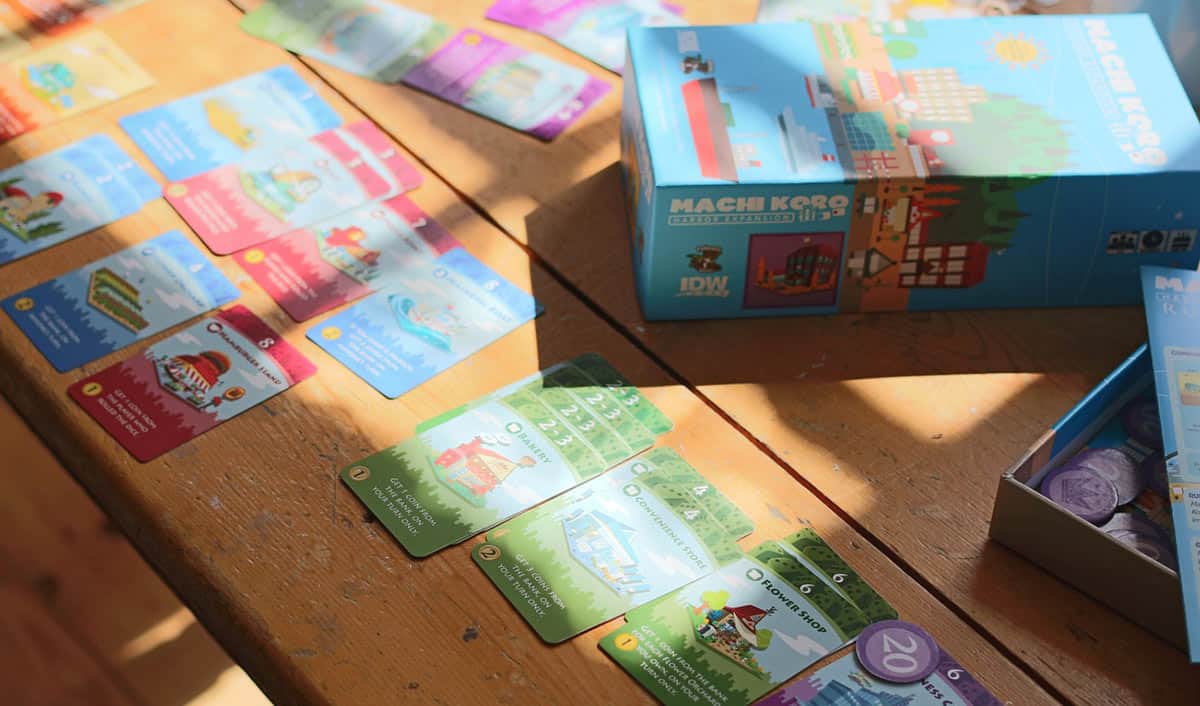 Matt: What does “Machi Koro” mean in English, Quinns?

Matt: What does “Harbour” mean in English, Quinns?

Quinns: It doesn’t have a direct translation, but you could say “Den of Lost Souls.” But let’s start with a quick reminder of why the base game is so delightful, and why people should think about buying it if they haven’t already. 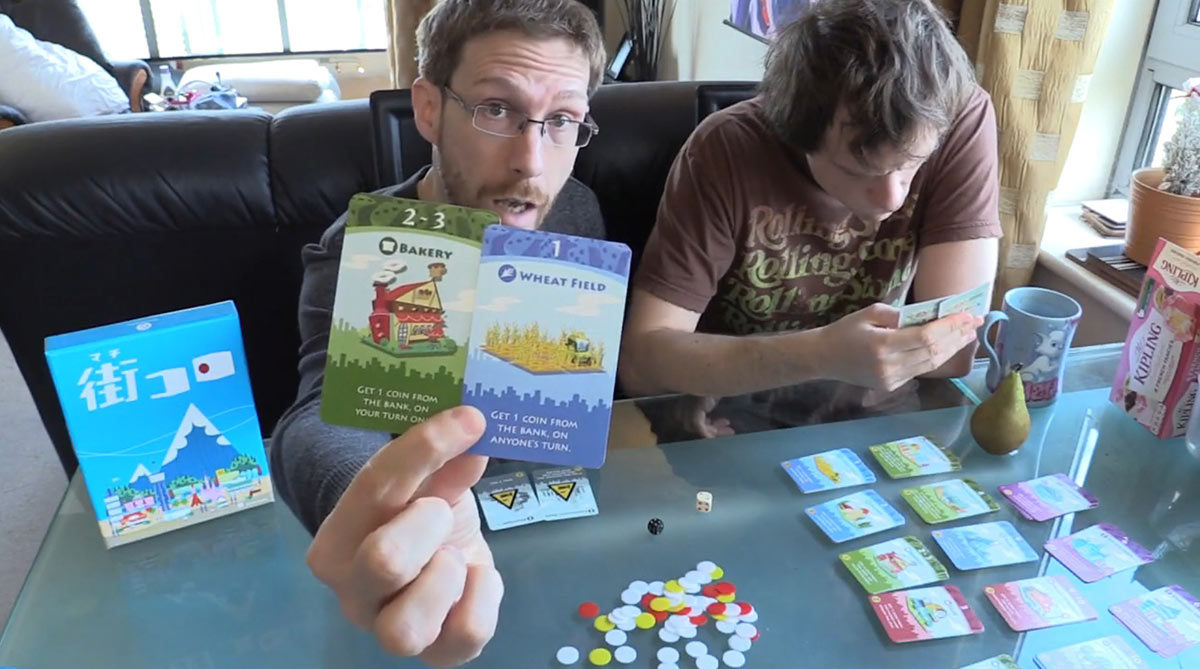 Matt: So yes, Matching Cornettos is a game where all you want to do is roll a six, but you keep rolling the number five and that is a number that doesn’t do anything. Everyone else will keep rolling a six, and you’ll start to jealously look at their lives and wonder at what point it all went wrong for you. You’d invested so heavily in the production of grain, splashed out on a market to help your city expand, and opened a chain of acceptable pizza outlets. And where did that get you, exactly? They’ve just opened a shopping mall. You’ve opened two cheese factories, but you don’t have any cows, and everyone who lives in your god-forsaken town has wandered off to cheat on you with other people’s cafes.

Matt: It’s also a game where you buy numbered cards which represent different buildings, then roll dice which activate those buildings, which gives you more money to buy more cards. Except that doesn’t happen because cows make cheese and you haven’t got any cows you stupid, useless man.

Quinns: Having fun and building a town in Macho Cosmos really is that simple. As simple as dropping a die (or two), seeing which of your buildings belch out some coins (based on the number at the top of the card), and constructing a single new building from the market as if you were attaching another screen or spinning wheel to this ridiculous slot machine in front of you.

The first person to build all of their face-down “Landmark” cards wins the game, is pronounced the Mayor of Mayors, and is allowed to eat his or her competitors in an event known as the Feast of Bones. All of which was cut out from the original Japanese release of this game! 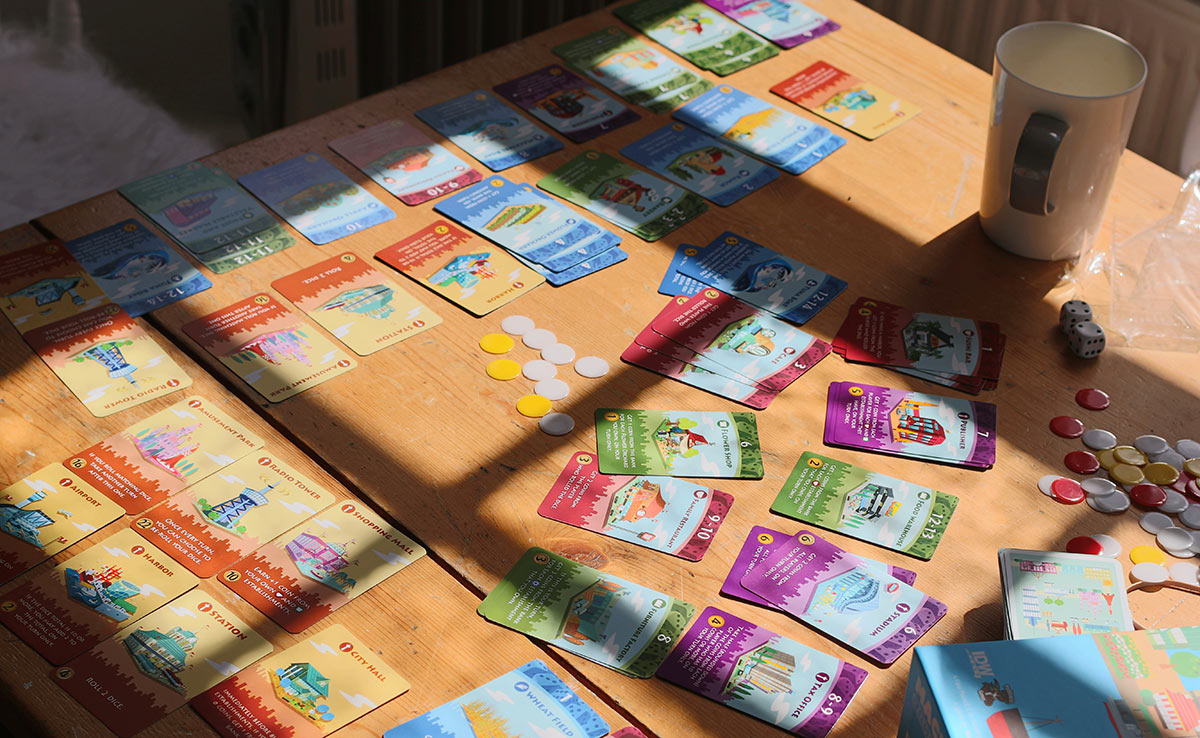 There are smart choices of when to build things, and what to build, but fundamentally you’re just gambling and it’s possible for wise investments to go wrong, or for silly investments to cough up silly money.

Really, when it comes to Marco Colon, the only wrong move is to not buy the game in the first place. Everyone I’ve played it with likes it. Including you, right?

Matt: Yes! At first it felt like the game could have spiralled off into constantly checking the cogs of your machine to maximise its efficiency, but it just got increasingly daft. You make endless mistakes in the course of your civic duty, but still make money despite being a total idiot. This is something that speaks to me on a personal level.

Quinns: Thankfully it’s just a game, otherwise the world would be in terrible danger. But you’re right, of course. The economic machine stuff is pleasantly simple, but still has huge appeal – you don’t get the same joy of having built a place that we found really made us smile in stuff like The Castles of Mad King Ludwig or even Imperial Settlers, but making money and snapping up buildings to turn your Mega-Dollar into Turbo-Dollar is satisfying enough.

Matt: And when there’s stuff you want to buy, you’ll have to act fast – new buildings are available in a limited shared-shop of rotating options… 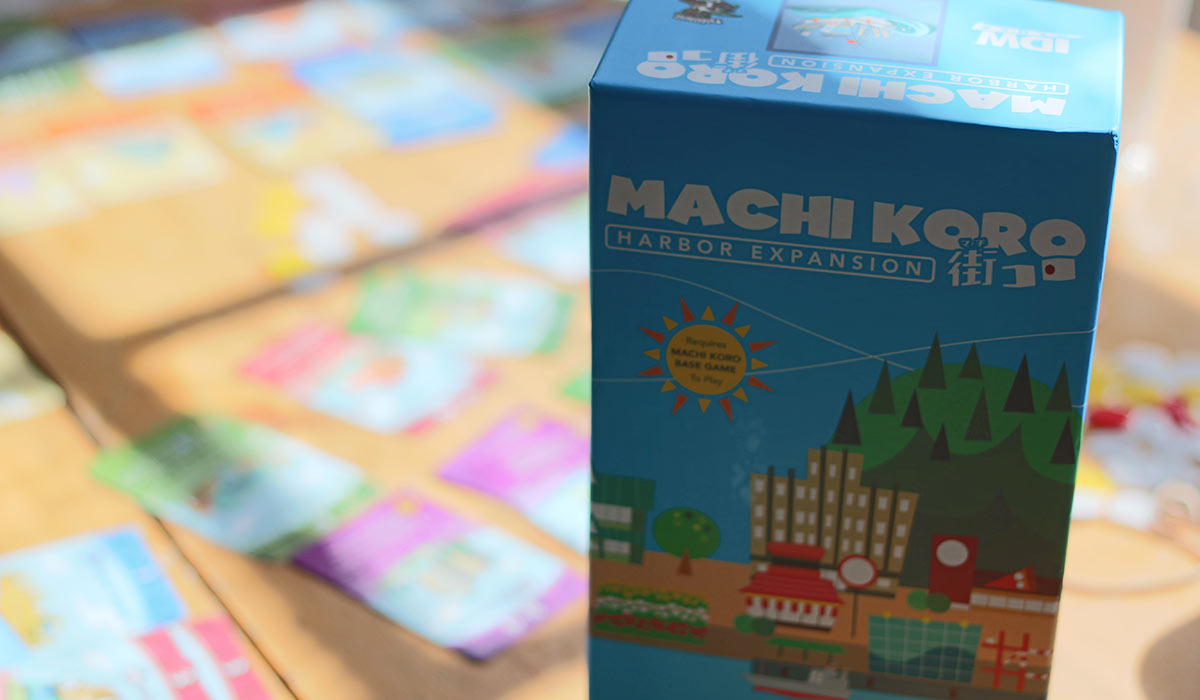 Quinns: Oh, that’s actually a whole new thing. The expansion doesn’t just add new stuff like boats, airports and an adorable industry of cut flowers. It fundamentally flips a couple of key rules – the original game let you buy exactly what you wanted from a wide array of neat little stacks.

Matt: What, so you could just decide exactly what kind of town you wanted to make, and then slowly piece together your carefully-constructed tiny city? That doesn’t even sound nearly as good.

Matt: Wow. OK, so with the Harbour expansion you now have a huge array of buildings, but only ten different types are available at any one time. You might have four Cheese Factories in the shop, waiting for an owner like cheese puppies at the cheese pound, but none of the Ranch cards that power the factories. Then when a single Ranch appears off the deck, players have to make a choice whether to commit to this cheese-based strategy, because if more Ranches come off the deck they could make some big money. 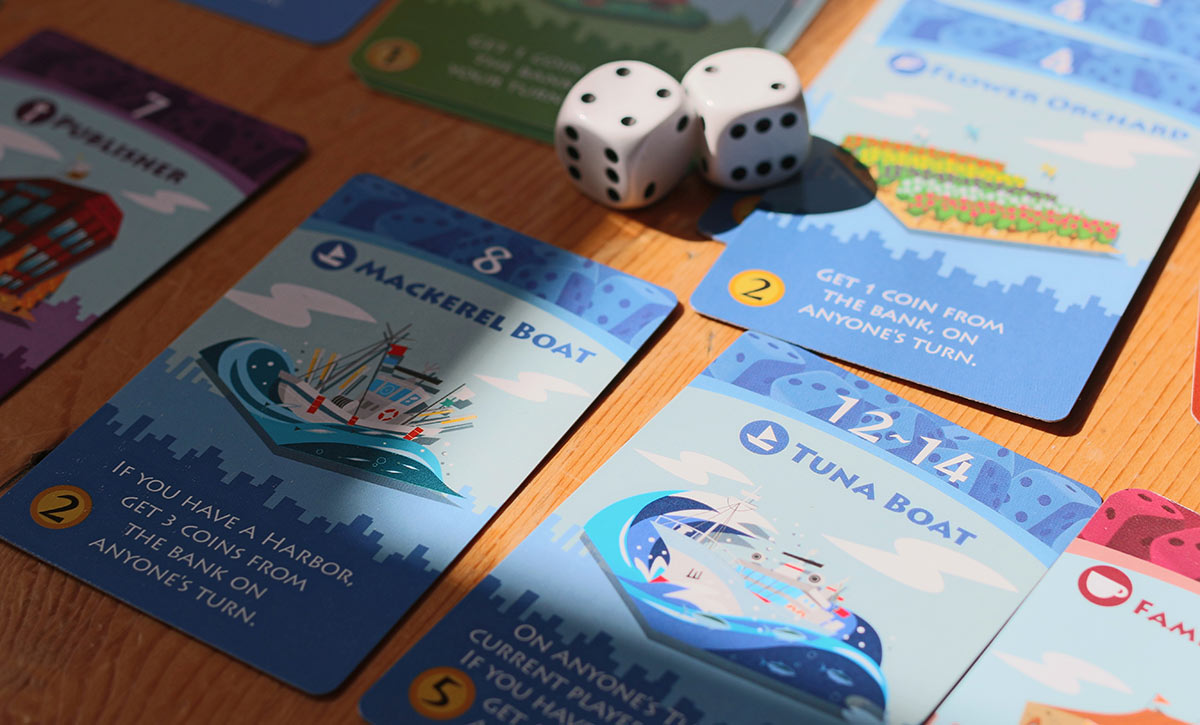 Having to adapt strategies on the fly and weigh up the worth of buying stuff to deny it from other players was one of my favourite elements of Market Cologne.

Quinns: Yeah, it’s like a little extra dose of silliness and gambling in the one area of the game that previously didn’t have any, and it instantly becomes a stronger game. The new Tuna Boat cards have the same attitude- if you manage to roll high enough everyone’s Tuna Boats activate, and that current plays rolls their dice again and all the Tuna Boat owners get that much money.

I’ve always compared the base of Bargain Column to craps, because it offers that same giddy excitement of needing a number and OH MY GOD YOU ROLLED THE NUMBER and taking a great handful of coins out of the bank. With the Tuna Boats it really is craps, where you might roll the dice and then scream and shout with everybody else.

Matt: And when the stakes gets so high that things become silly, the pace of the game keeps ratcheting up. Rather than having one player slowly amass a fortune while everyone else trudges through misery-treacle, sitting on any kind of cash in Carpet Corner leaves you wide open to unbelievable levels of theft. Spend your riches fast, or risk losing most of it. Saving up for the expensive stuff is the only way you’ll win the game, but is it really worth the risk? Gosh, it’s really rather exciting. 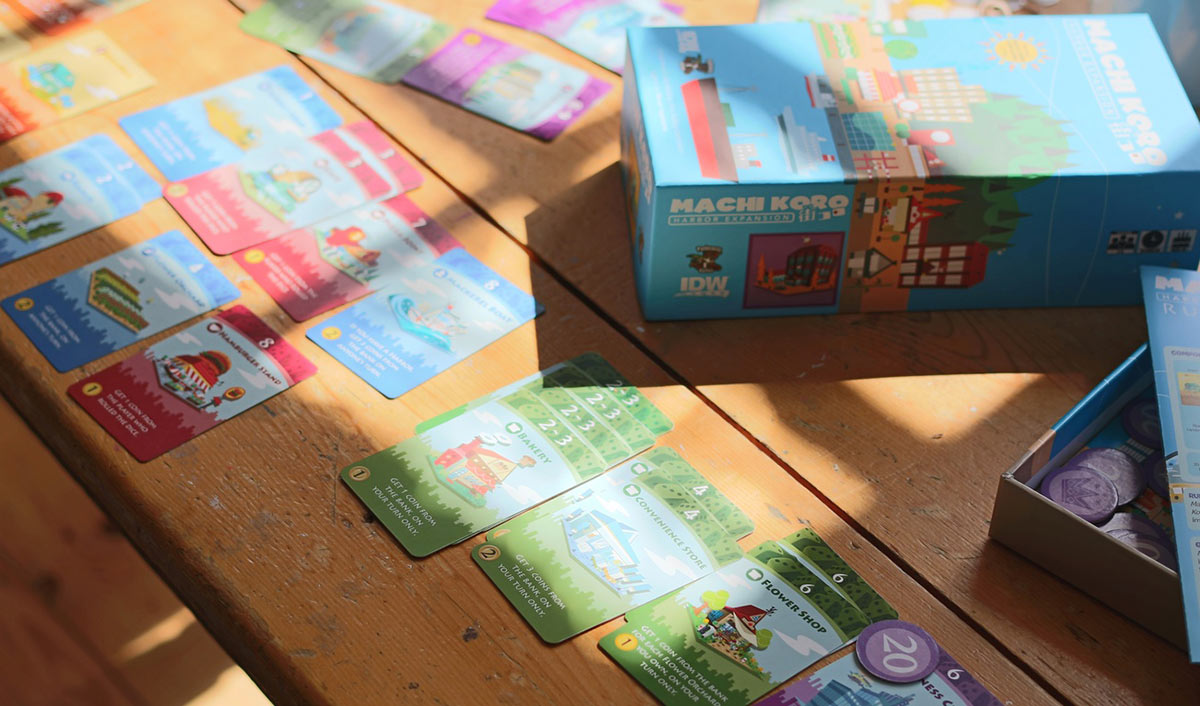 I was really surprised by Carpet Corner: Harbour. Usually expansions provide a breath of fresh air to a game like a medic performing mouth to mouth resuscitation; it’s a quick and dirty way to bring a game back into your life.

In offering all the colourful new buildings and (most importantly) the brand-new way to play, as well as components for a 5th player, Harbour turns a game I like into a game I love. I’d call it a must-buy expansion. And SU&SD never calls an expansion a must-buy. We must be getting old.

Matt: I’m not getting old, I do rituals.

Quinns: Are you talking about the time you ran over your neighbour?

Matt: Not until after the inquest, no. 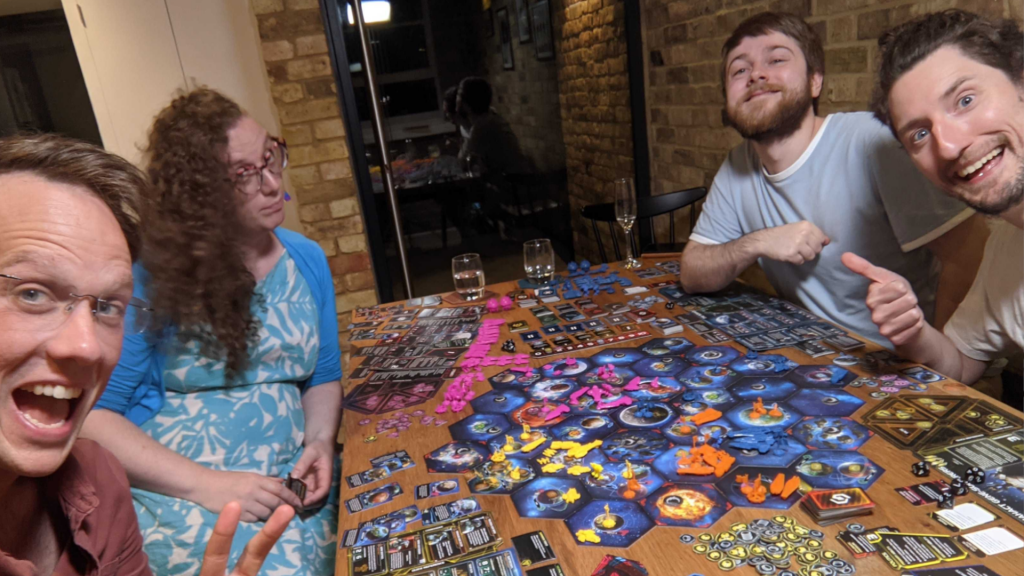