Even if the game didn’t look good, Academy’s interest in it would be enough for me. But this sounds great. A super crisp wargame full of negotiation and alliances, with players trying to scratch together control of villages, fiefs and bishoprics. I got tired of the Game of Thrones board game pretty quick – it’s just a little too sloppy for how long and stressful it is – but this looks like the perfect substitute for something tense, strategic, but also profoundly personal. If it has a victory condition that lets players win together, a la Cosmic Encounter or REX, I’m sold.

Speaking of profoundly human, surely these are the best dice ever. I appreciate the “f” stands for Fief, but I challenge anyone to lose a battle on a dice roll and not think “FFF–” stands for something else.

I’d love to play this one. Maybe you could come over and play it with me, Ben Rubenstein! Let’s not invite Keith Block though because he is a jerk. I mean, I can take a joke, but there’s a line you don’t cross, you know? 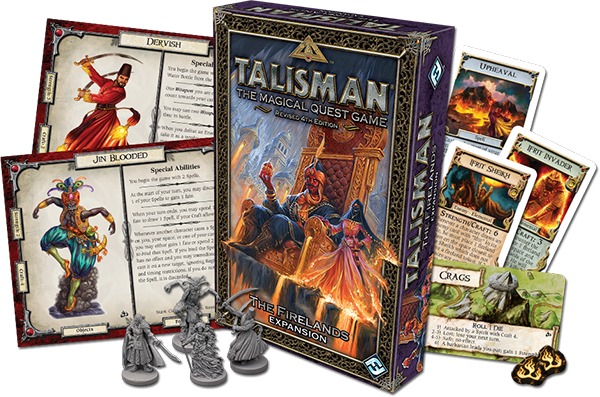 Maybe Keith can stay at home and play a solo game of Talisman, which is STILL GROWING like some kind of cardboard fungus. Above you can see The Firelands, the recently announced 11th expansion for the world’s most longest magical quest game, hot on the heels of The Nether Realm, which arrived in shops last week.

Interestingly, The Nether Realm is one of Fantasy Flight’s print-on-demand expansions that’s actually designed by Jon New, curator of the fansite Talisman Island. So, at this point it’s just Talisman fans making Talisman and then buying Talisman, with Fantasy Flight acting as a complicit intermediary for people looking for a fix of drawing a card that tells them they miss a turn? We live in interesting times. 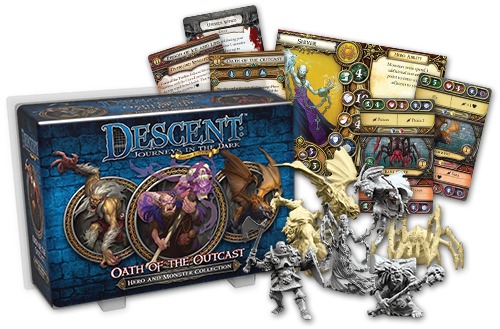 Basically, when Fantasy Flight released Descent 2nd edition they soothed people like myself who’d dropped $200 on Descent expansions by ALSO selling us a $20 “conversion kit” full of cards, allowing us to use our dozens and dozens of plastic miniatures from the 1st edition, like the beastmen and razorwings you can see above, in the 2nd edition.

These new Hero and Monster collections allow people who didn’t own the first edition, or who want much-improved sculpts of those old monsters, to pick up big boxes of redesigned 1st edition monsters and heroes.

If I sound cynical, it’s not intentional. I think this is pretty cool! It’s just that this confusing straddling of editions past and present just makes my brain feel a little… stretched? I mean, when they inevitably release Descent 3rd edition, will there be conversion kit conversion kits? What about Monster Collection Collections? 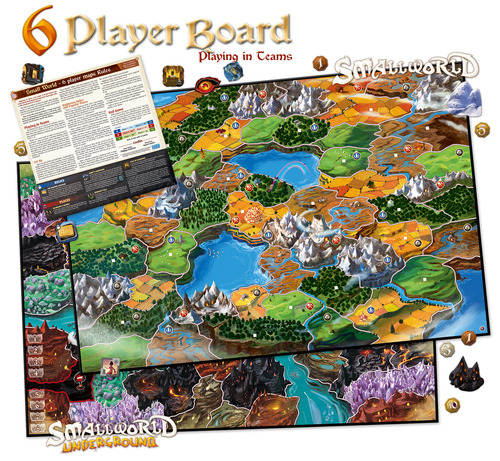 Ah, here’s something much simpler. Simple enough that even scatterbrained gerbils like Keith Block will understand. Days of Wonder will soon be selling a 6 player map for their enormo-seller Small World, with another 6 player map for Small World Underground on the back.

Excellently, the expansion will see players split into three teams of two players per. Anyone hoping this might shut me up about how there aren’t enough team board games might well be disappointed. I expect this’ll be such a fun way to play Small World I’ll end up shouting more, not less.

Now, let me climb back into my old wheelhouse for a moment as we cover some videogame ports!

The Witcher’s a moderately interesting IP to work with. The titular Witchers are children taking in at a young age and subjected to years of noxious potions and harsh training to make them magical, monster-slaying heroes, but who are also infertile and so represent curious, sordid sex objects. And perhaps even moreso than in Game of Thrones, the universe is painted entirely in shades of grey, which is a lot of fun.

…That said, after reading some 1000 words of copy on the above preview page, I’m still waiting for one interesting idea, mechanic or concept. Effluvium klaxon on standby. Be careful, Ben Rubenstein! Don’t pre-order this one. I care about you.

AND FINALLY! Cryptozoic has announced they’re developing the tie-in game for Hawken, the pictured independantly-developed game of stompy robot combat. Now, I know what you’re thinking, Ben Rubenstein, because we’re kindred spirits, you and I- Cryptozoic make games that are pretty but basically not very good.

But wait! Because the full name of this one is HAWKEN: The Real-Time Card Game. A game of playing cards that represent weaponry, maneuvering and high tech gadgets, then stopping the instant somebody snags the “FIRE!” button from the middle of the table. Then players calculate speed and damage done, whether they played too many cards and their mech overheated, and then you go again.

In other words, it sounds like Space Cadets: Dice Duel: The Card Game, and super interesting for that. Whether it’ll work? Well, we’ll see about that.

(Huge thanks to Keith Block and Ben Rubenstein for their entirely non-consenual appearance in this article. I love you both. <3.) 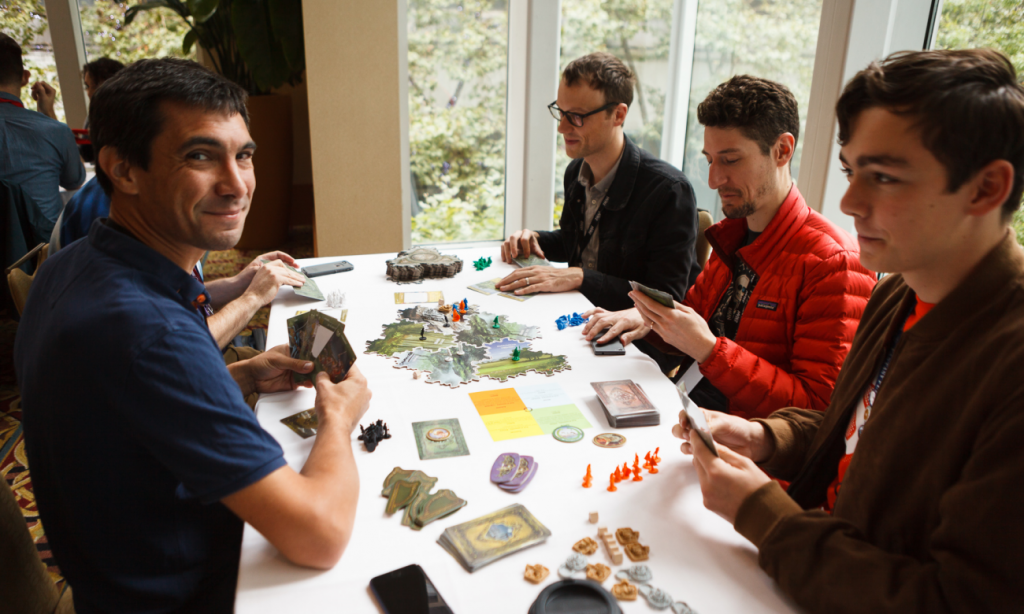 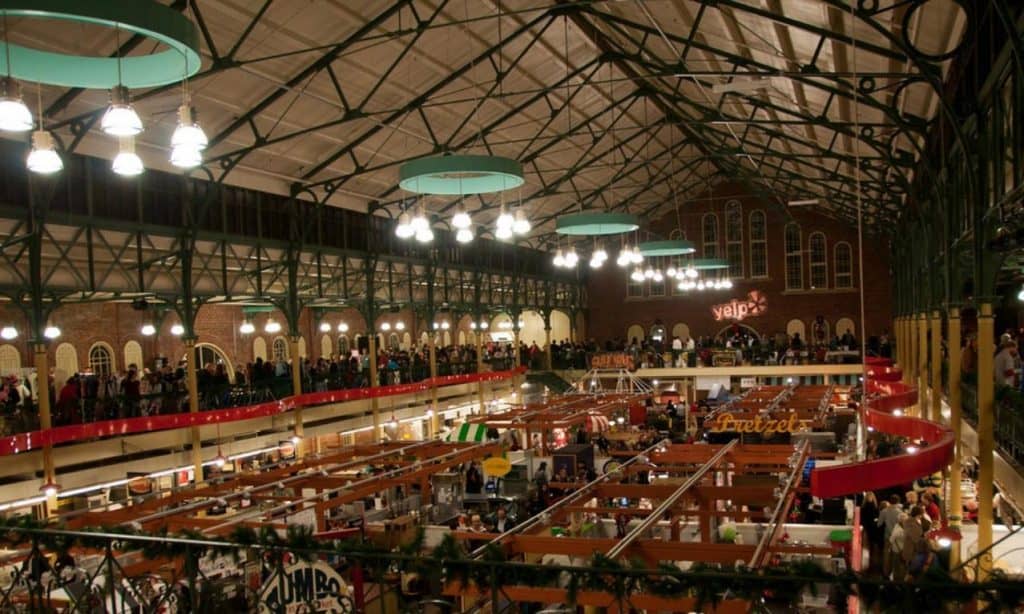