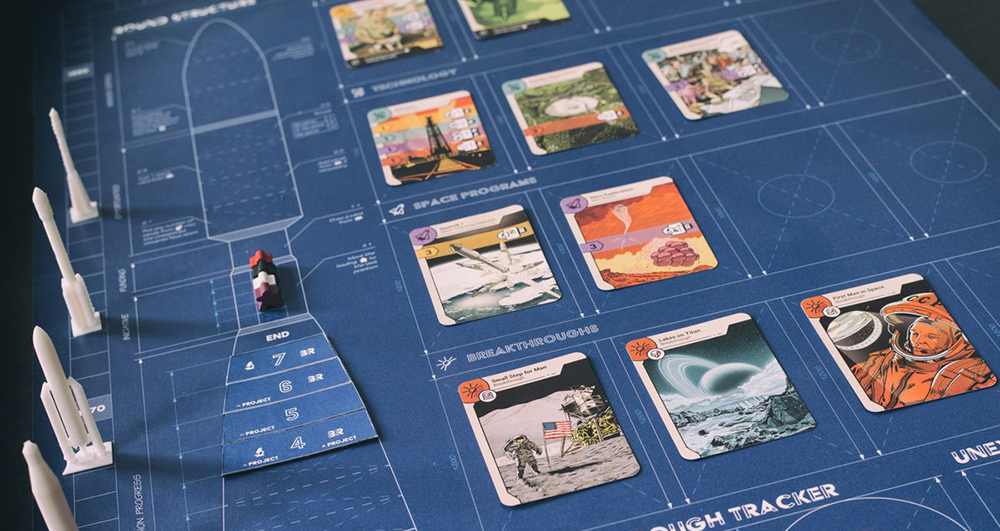 Ava: After a week playing the fun game ‘moving all the objects I own from one building to another and then slowly finding new places for them to sit’, I’m mostly on my own for this week’s Games News. I’m cosily nested in an incredibly tall house on a slightly different hill in my gorgeous little valley. The sky is blue, the trees are green, the garden is gravelly and the game table is flat.

What a perfect time to roast up some news.

Kickstarting its way into orbit this week is Space Race, a follow up to a card game of the same name that looks to take up a little more of your table. The art direction is the star here, all blueprints and sharply inked illustrations. Players will build rival agencies sending astronauts into the void with a some literal and metaphorical engine building and what looks like a bit of orbital area control.

Some of the densest games I’ve ever seen (High Frontier and Leaving Earth) are about launching space shuttles, could this be the one that brings the moon to the masses? As an adaptation of a tried and tested card game, it’s got a better chance than many, but I’ve not actually tried the original Space Race card game. Has anyone in the comments made it into its orbit? 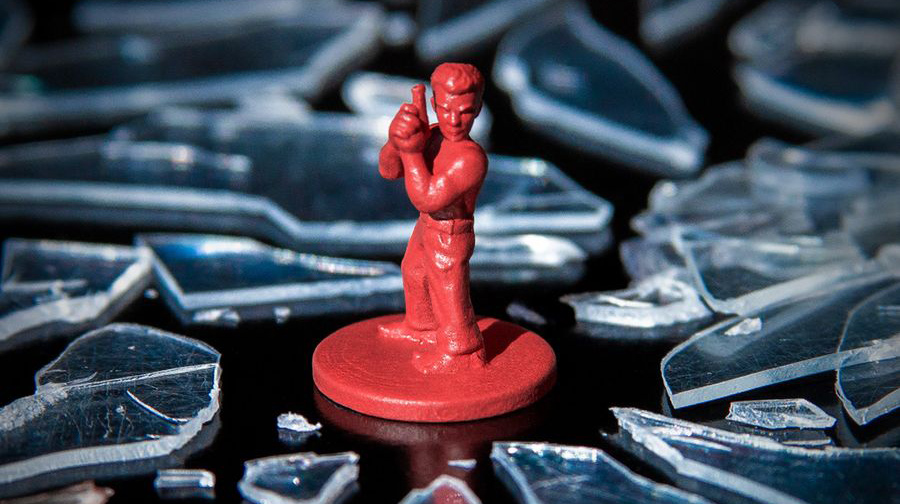 Are you ready to take off your shoes and scrunch your feet into the carpet? Because if you aren’t, maybe you aren’t ready for more details about the Die Hard: The Nakatomi Heist board game. Honestly, my initial reaction was to ask ‘who would want this’ but I’m genuinely intrigued by the good guy one versus bad gang many structure on offer here. We can now see some sculpts of minis that are supposed to look like Bruce Willis (above) and Alan Rickman.

Could a board game deconstruct the architecture of the 80s as well as that beloved film? The film still stands up because of the unexpected ingenuity of the hero. If that sense of desperation and creativity can be replicated, this could be a winner, but it’s a pretty big if.

I’m only interested if it includes a soundtrack of tense thriller-horn versions of Winter Wonderland and other festive favourites. If they don’t provide the right noises and I end up in front of a copy of this, someone is going to get very bored of my yuletide trumpeting. 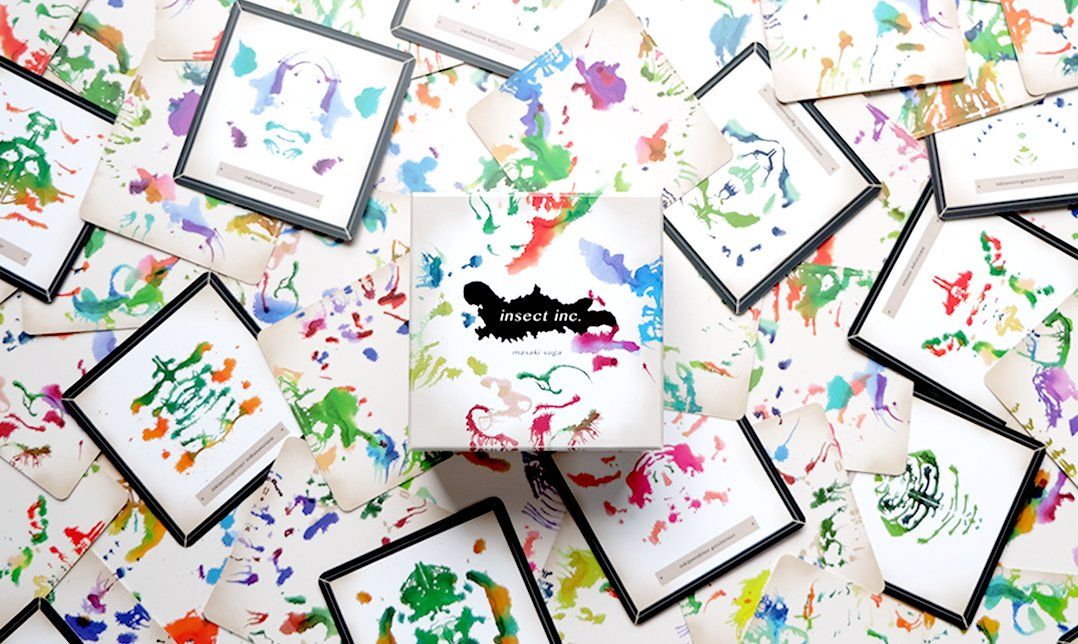 If there’s one thing I’ve learnt since I’ve started fishing for news it’s that Board Game Geek’s W Eric Martin casts his net over some fascinatingly pretty and studiously weird fish from the Tokyo Game Market and other Japanese sources. In a recent round up, Insect Inc caught my eye like a spider in a jam jar. Ink blot creepy crawlies is exactly the sort of aesthetic that tickles me like a trout. I hope we see more of these games make it across the oceans to Anglophone publishers, because I desperately want more elevator queues, Rorschach bugs and animal gangsters. 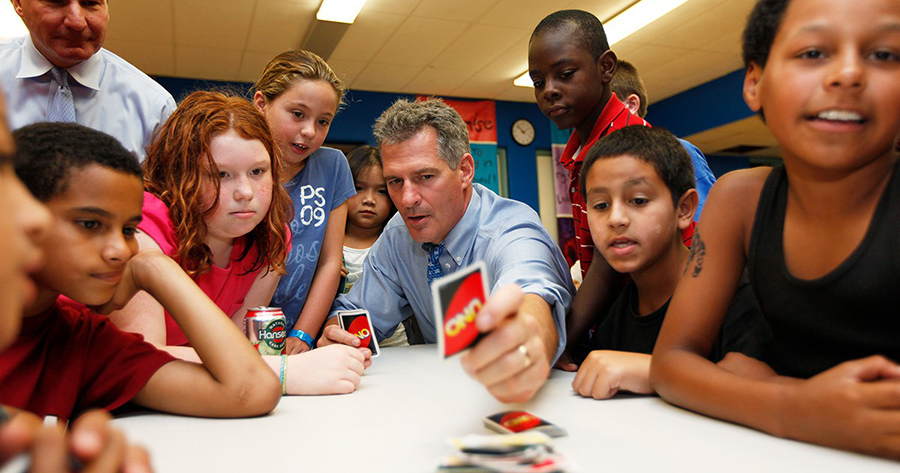 In more mainstream game news, the makers of Uno caused a storm this week by telling the world they’ve been playing the game wrong. They issued a clarification on twitter to say you can’t dodge a +2 or +4 card by playing another to pass the penalty onto the next player. I’ve always been baffled by Uno, as I assumed it ripped off the game I was taught as Black Jack. In the game I was taught, you can definitely bounce those penalties around the table, which feels fundamentally more dramatic. Judging from the reaction, the house rule will live on.

There’s something fascinating about game companies trying to re-teach games that are increasingly passed down by oral tradition. The latest editions of Monopoly have a warning on the front of the manual not to use some popular but game lengthening house rules. It’s often claimed that the free parking lottery and failing to auction properties turns an okay game into a bad one, but it’s the bad one that most people play. It’s impossible to extricate games from the way they are taught, and that folk cultural process is apparently somewhat unstoppable.

I also love the image of me wandering into a casino and attempting to play Uno at the Black Jack table.

Ben Collins mentioned in the comments last week a big news story we overlooked. Plaid Hat Games’ Ashes is coming to an end, with a big final tournament, a base game reprint and the last expansions being released. I’ve still never delved into one of these ongoing collectible things, so not only have I not tried Rise of the Phoenixborn, but I haven’t tasted the sadness or closure that a grand finale like this offers. I hope that it’s like one of those TV shows that ends when it’s supposed to, with a satisfying conclusion (cough The Americans), rather than cutting off at some random juncture (cough One Day at a Time), or being rushed suddenly into an early compromise of a finish (cough Sense8).

In a little maze of references, the above SHUX presentation by Scott Westerfeld ‘Victory points suck’, got a lot of attention this week, not least from Ludology’s Gil Hova, who laid quite hard into Scott with a request to stay in lane, and respect that the narratives and pleasures of games just work differently to those in novels. It’s a harsh but interesting read. Both Scott and Gil have great points to make, and ironically, Scott’s desire to tell a bold story leads him to make absolutist statements that are easier to refute.

I was faintly bewildered, thinking Gil was responding to a friend of mine who did a similar talk two years ago at woodland games conference Feral Vector. Kim Foale’s take on the suction of victory points squeezed in Bourdieu’s theory of social capital into the vacuum, and suggested some inspiring alternative approaches. The write up of their talk is worth your time if you like thinking about how games work and what they mean.

Quinns: Hey everybody! I’m going to make a quick appearance in Ava’s news to point you towards a podcast that you might be interested in. Above (but also through this link) you’ll find an exhaustive interview with Magic: The Gathering designer Richard Garfield about designing Keyforge, the collectible card game where every deck you buy is unique.

The podcast that he’s appearing on is worth a recommendation, too. The Spelunky Showlike is primarily a podcast about roguelike video games, created by some extremely talented friends of mine out of New York. In fact, one of these people, Zach Gage, was interviewed on this site a few years ago on the subject of switching from video game to tabletop game design, and that interview even has some of his thoughts on the 52 card deck. 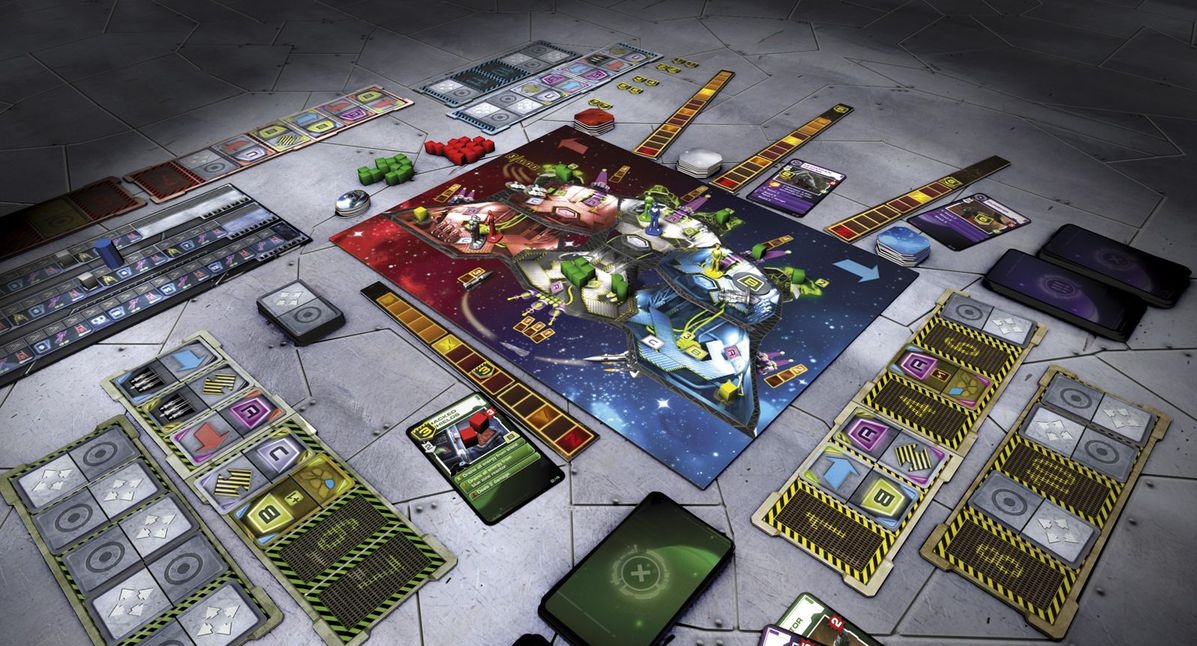 Ava: And finally, in entirely self referential news, this week is a stream week, and Quinns, Matt and Kylie will be playing Space Alert (pictured above) on Twitch this Thursday. This real time interdimensional chaos simulator is one of the longest standing items on my shelf of shame. I’ve not played it in seven years of owning a copy, and wish I could’ve made it down to Brighton to get my space-cherry plucked on camera. I’m pretty excited to see it in action, as maybe once I’ve seen the dramatics in action, I’ll be less scared of the teach and can get my copy played.

Quinns: Oh my gosh, Ava. You have to play it. It’s everything. It’s Soviet Star Trek, it’s got giant space crabs, it has people bickering because the elevator can only hold the weight of one person, and at the same time it’s maybe the most terror-inducing game I’ve ever played. It’s a hell of a thing! I can’t wait to show it off to our beloved Twitch audience on Thursday. 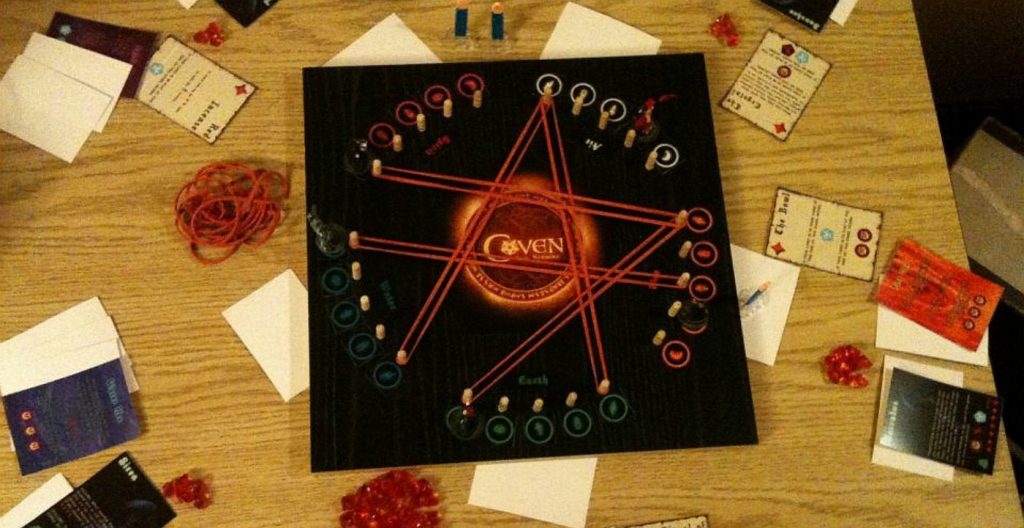 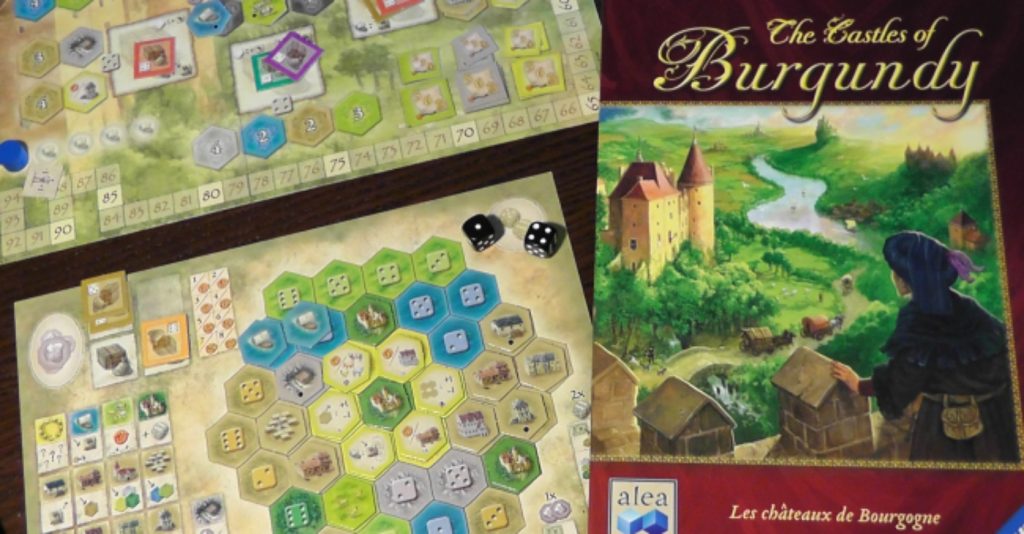