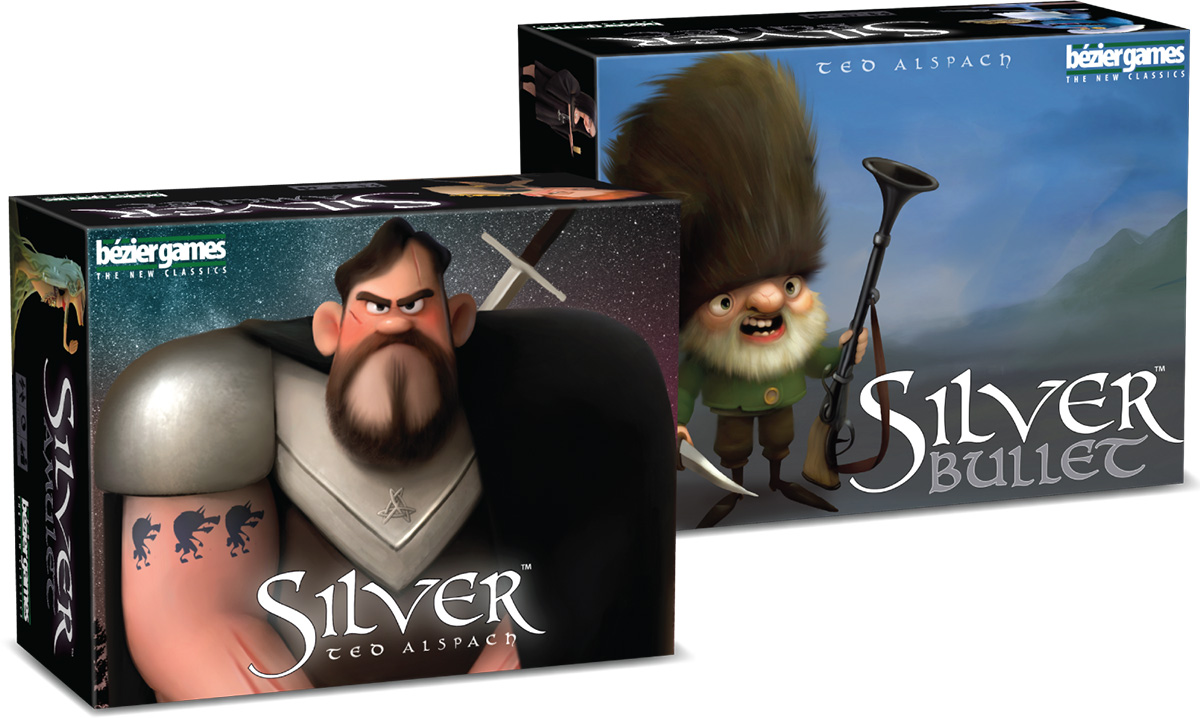 Ava: Hello lovely news-lovers. It’s another Monday, and I’m a bit worn out. I’ve had a wobbly weekend of overwhelm.

Board games can be a playful, joyful anchor when the seas of your mind are rough, a set of routines and actions you can fall into that pulls you together, brings you back in touch with the people you care about. I’m so grateful to games and the people that make them and the friends that play them. That’s why I keep coming back to dig through the newsiest jungles of the internet, bringing you select morsels of upcoming play possibilities.

Ted Alspach is still into werewolves, or at least fighting them. This time he’s warding off the beastfolk with silver and several small boxes. The Silver series will build around the core mechanics of Cabo, another Bezier games release, which was in turn based on a more traditional card game (that may or may not suck) called Golf.

Each player in Silver will have a little village of cards in front of them, face down. With limited knowledge of what they’re holding, they can activate special abilities to look at cards, swap cards, or generally cause mayhem. Once players think their village has less werewolf juice (or ‘lower numbers’) than anyone else’s, they can call the end of the round and win or lose points as a result, as the villagers are beset with beasts.

The series will start with Silver, and then move onto Silver Bullet, and that’s all we know for now. Each game can either stand alone or be combined with other sets by mixing and matching the villager types. I’m faintly wary of this type of variability. I prefer a curated ruleset to one I’ve got to guess at, but it does depend on the core game’s robustness. Ted designed One Night Werewolf, Suburbia and Castles of King Ludwig, so has probably earned a certain amount of faith and werewolf repellent.

Alderac Entertainment Group has kicked off their experiment of not releasing too many games by announcing two new games by designer John D Clair, creator of Space Base and Mystic Vale. Details are sparse, but Dead Reckoning and Ecos: First continent are due out later this year.

Dead Reckoning will have you ‘card-crafting’ (using card sleeves and perspex to allow you to customise the cards in your deck during the course of the game) pirate crews to sail the seas and use unlikely Cornish accents. Ecos will use simultaneous turns to have you build pre-civilisation ecosystems. You and your wallet can decide if you’d rather be a pirate or a force of nature. I say, get thee a John D Clair who can do both.

Kickstarter is going more than a little retro this week, with Space Invaders making the transition from arcade cabinet to cardboard box. This ever descending rainbow of pixel-squids will be battled in a deck building game where your position on the board dictates both what you can buy and what you can kill. This failed to pass my kickstarter rule of thumb of either (a) giving me a clear idea how the game would play or (b) making me really excited, but I suspect this hits some folks’ nostalgia-spots a lot closer than mine. I’ll not be truly tickled until someone makes a board game of Repton. Or maybe Turrican 2.

Please nobody do that. I promise I’m joking.

Another kickstarter that grabbed me by the antennae was Bites, a snack sized picnic of a game that knows exactly how to prod my inner entomologist. Fittingly, the best way we could embed the promotional photos was with the above ant-scale image, so please do click on it if you’d like to see it at all.

I remain obsessed with ants, and the cute little meeples here caught my eye, as did the little cardboard ant hill. The pitch also promises that ‘players can move any ant’ and ‘chocolate gives you special powers instead of points’. This is exactly the kind of realism I’m looking for in a game.

Bites is a remix of an abstract game called Big Points, and has you moving ants to the next spot in their colour and picking up nearby food. Where the ants end up sets the value of the food you’ve collected, which sounds like just enough strategy to make this interesting. I am a bit baffled as to how the ants ended up as the patron saints of the relevant foodstuffs, but I’m willing to roll with it. I think this is going to look lovely on the table, and those ants are adorable. Just make sure nobody looks up what Bites means in French. 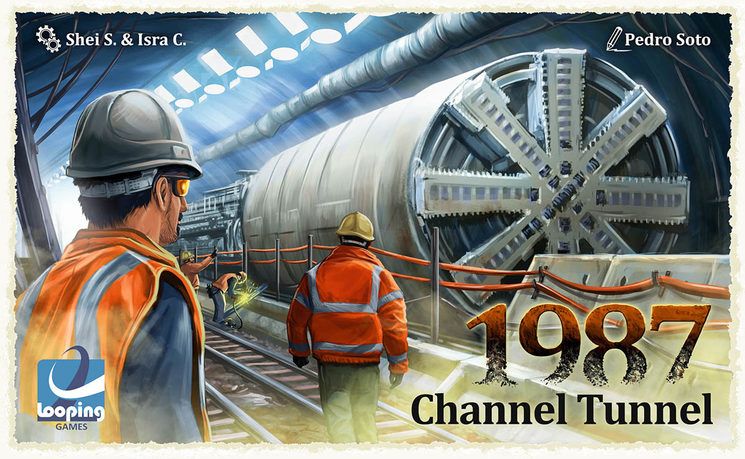 Speaking of the French, while Quinns isn’t looking, I’m going to sneak in a boring game* that tunnelled right into my heart.

If there’s two things that get me going, it’s large infrastructure projects and games which make reference to specific dates. You can imagine how I felt upon discovering Looping Games are working on 1987: Channel Tunnel. Two players will take opposing coasts of la manche and place little stacks of engineers to try and project manage an enormous and symbolically-loaded tunnel under the sea. At the end of the game, you’ll tot up how much technology you’ve developed in the game, but also check that your machines haven’t dug too far off track. I love the idea that you might just fail completely and end up with two really big, long holes. I haven’t been able to find out how scoring works in the ‘two big holes’ scenario.

*I’ve tried to talk myself down from this joke all day, and I’m really sorry it’s still in there. 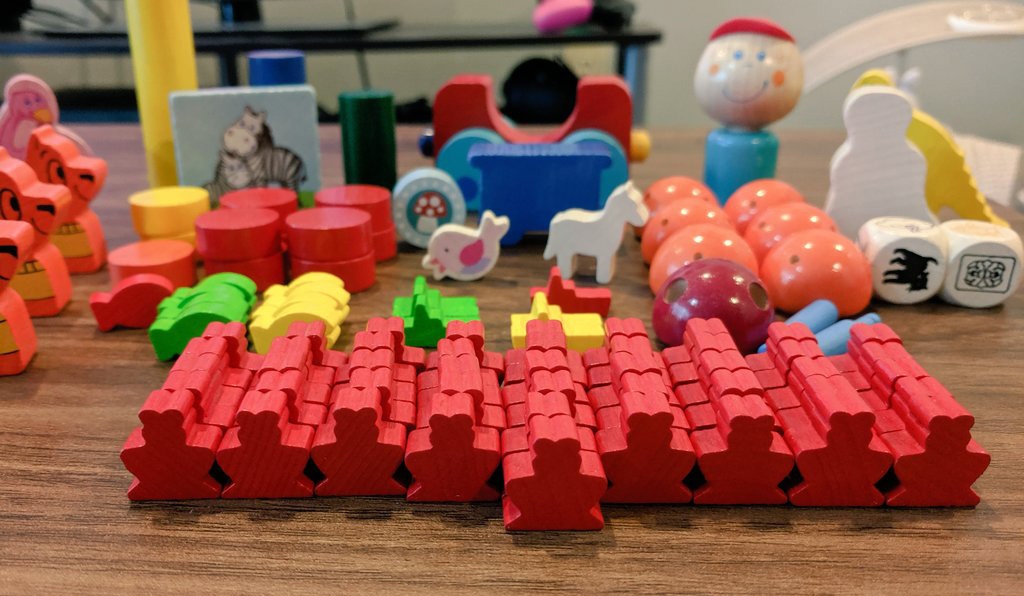 I don’t know if a game design competition is something that we’d normally cover, but someone on twitter posted a picture of the bag of bits they got from Haba USA, and I’m enchanted by the style of this contest. For five dollars (if you live in the US) Haba will post you a little bag of wooden pieces, and you get your money back if you send them a prototype using some of them, with all rights to the design remaining with you, the designer.

Family friendly Haba make some really adorable games that occasionally punch well above their weight: Go Cuckoo and Rhino Hero are quirky, joyful treats. A lot of that joy and quirk comes from the lovely solid feel of the beautiful wooden pieces. I think it’s delightful that they’re scouting out their next big hit by starting with the tactility.

Sticking with tradition, my ‘and finally’ this week is a project gathering various game designers’ pithiest thoughts. With names you recognise and names you won’t, there’s a lot to chew on at website Design100. I found the web design to be utterly infuriating, but behind that veil, there’s intriguing quotes from a huge range of designers on everything from accessibility to collaboration and back again. 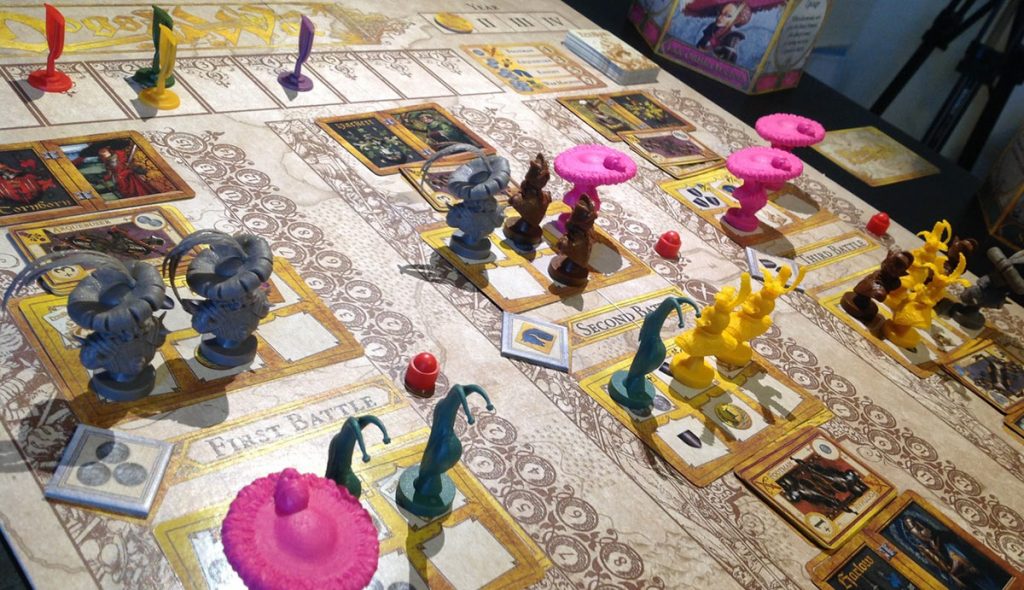 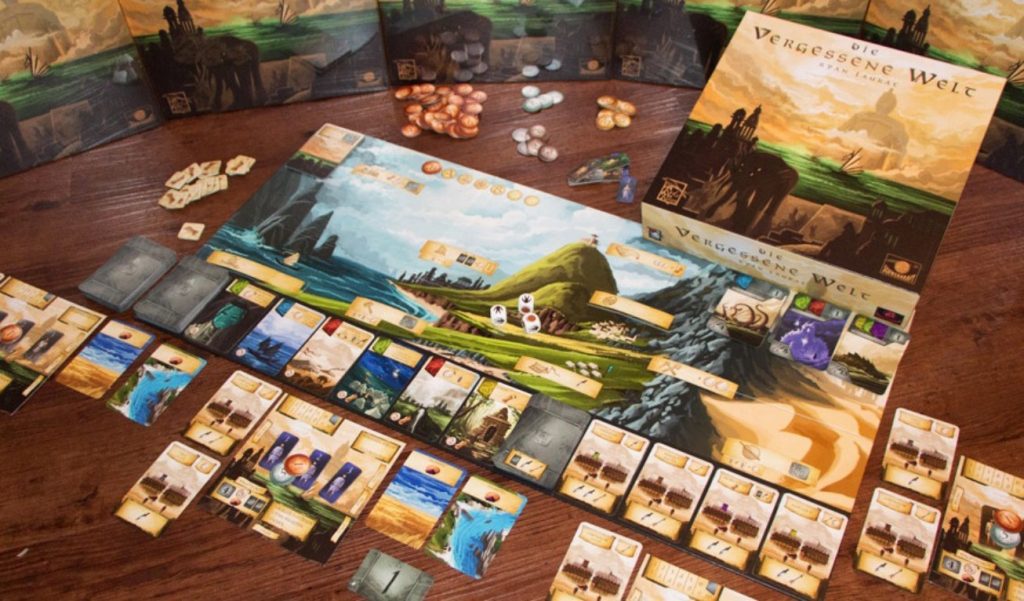