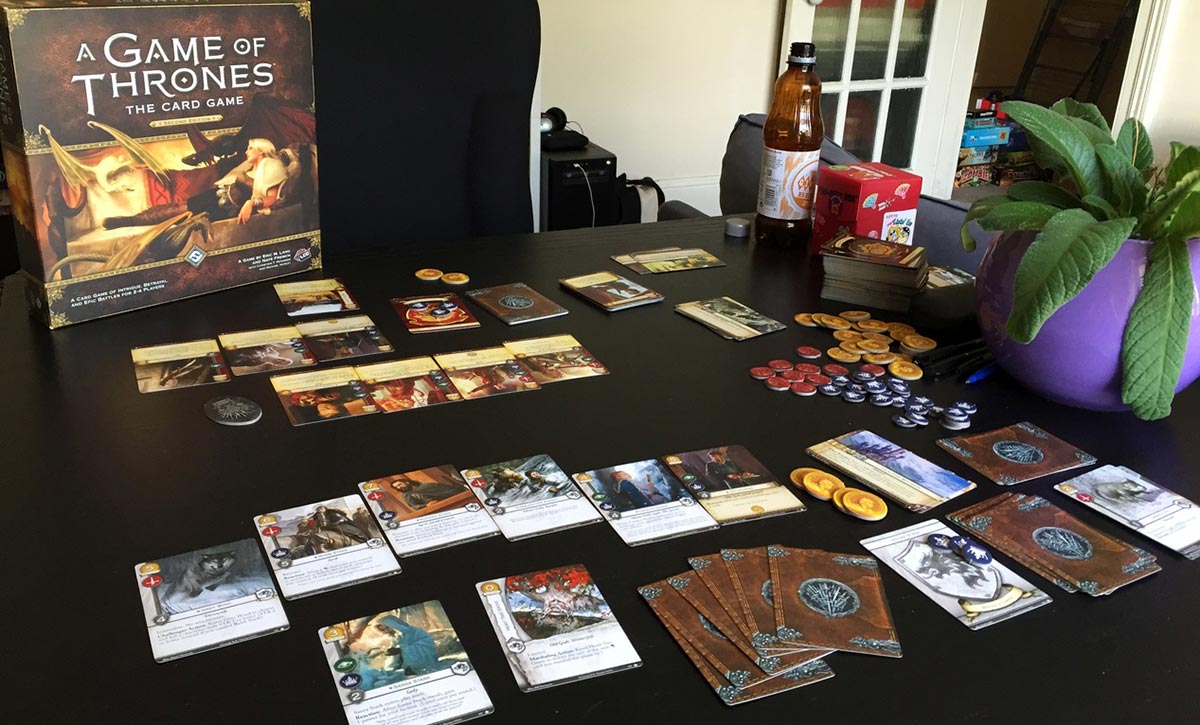 Caveat: I’ve not played the 1st edition, so while I’ll touch on what they’ve added, I won’t be talking about the many improvements they’ve made. For that you want to go here, click “read more” and scroll down to “What are the differences?” 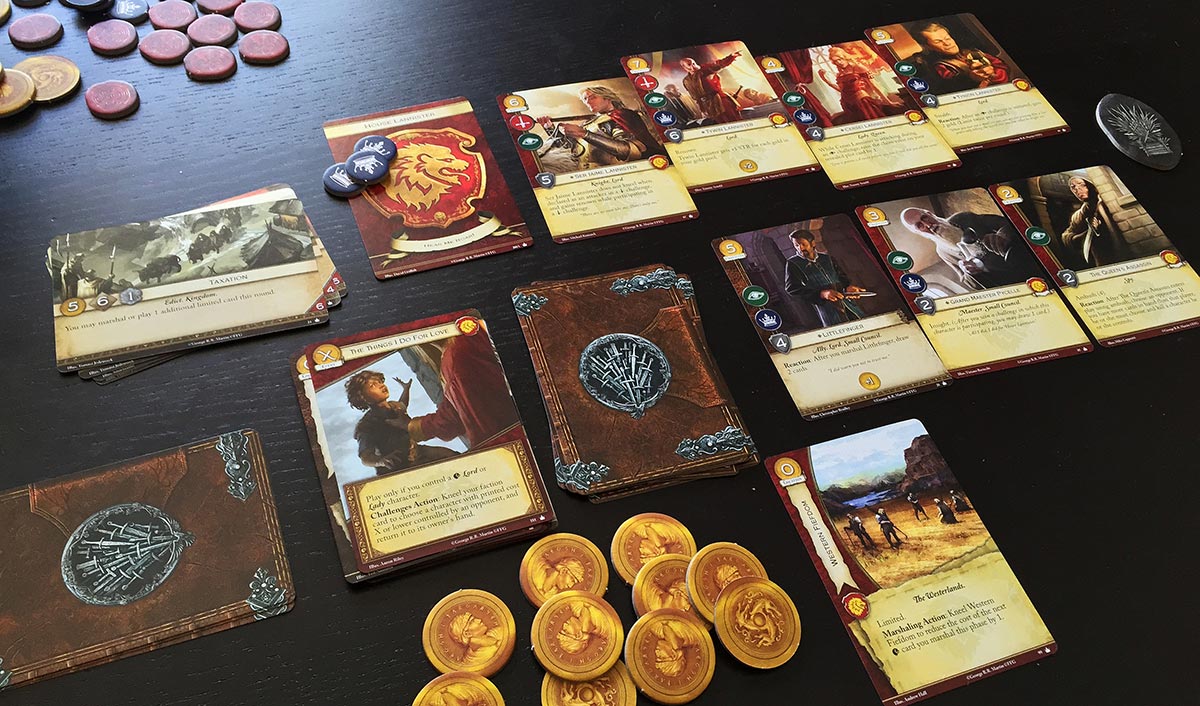 The immediate simplification I want to make is that Game of Thrones: The Card Game is like Magic: The Gathering except you’re fighting your opponent on three fronts. The characters that you play from your hand have a “strength” value, but also big coloured buttons above it showing whether they can be used in fights for Military, Intrigue or Power. As you’d expect, Ned Stark contributes a vast reserve of strength to your military and power struggles, but he’s about as much use in clandestine spywork as a high-visibility jacket.

If you wouldn’t have guessed that, because you’ve somehow trundled through the 21st century neither having watched or read Game of Thrones nor absorbed the spoilers through osmosis, you’re going to miss out on an awful lot of the fun here.

The colourful themes of card games aren’t just set dressing. They’re vital for drawing players into the game, and as new cards come out they’re responsible for brand new interactions that are dramatic, thought-provoking or laugh out loud funny. In my first game of 2nd edition my Lannister opponent played a “The Things I Do For Love” card, except in our alternate history he pushed a puppy out of a window.

If you don’t get why that’s funny, I’ve made my point. The problem here is that you’re being entertained not by grand themes a la Netrunner, but by the actions of characters you know and love. While you can glom a character’s personality from their gorgeous artwork and the occasional scrap of flavour text, you’re nonetheless going to be missing out, and your friends are going to spend a lot of time saying “You know nothing” in a Northern accent. 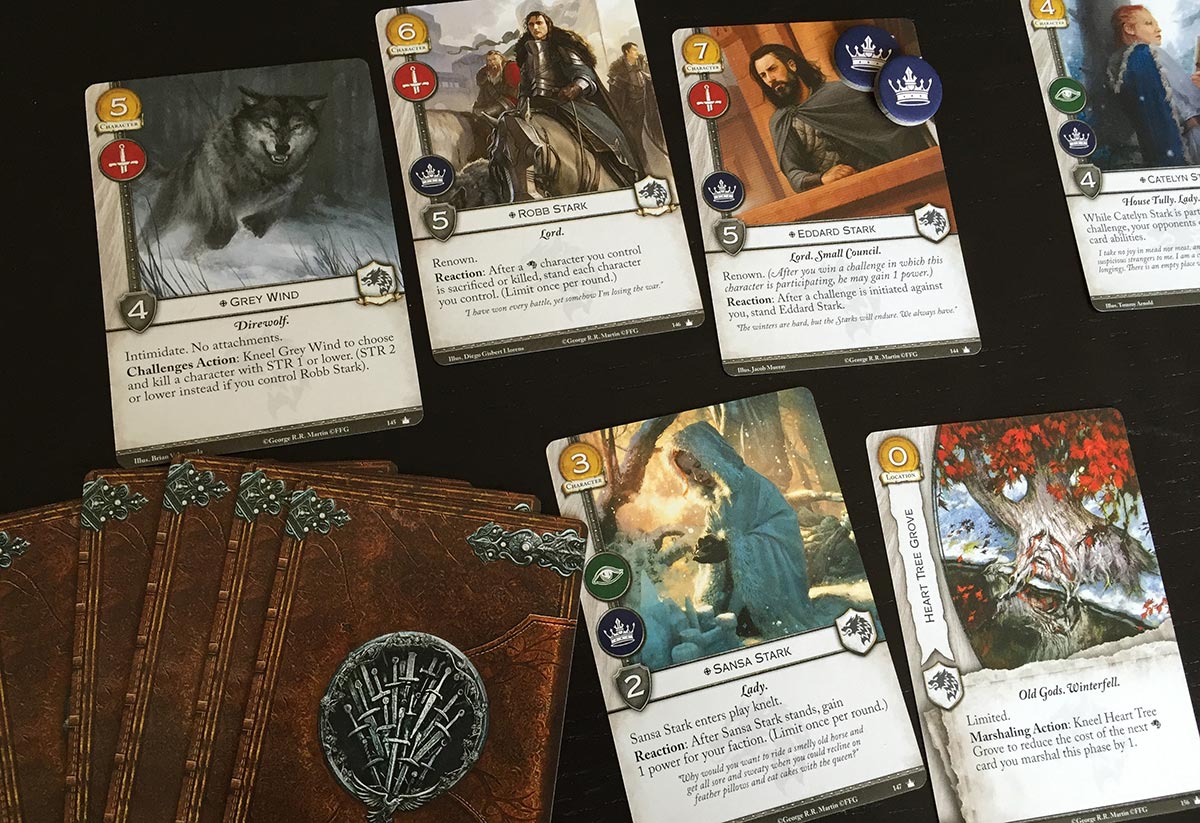 But you’ll still be able to enjoy a very strong game indeed. The fundamental puzzle of how best to use your characters; when to attack, HOW to attack, and even when to bother defending, is utterly absorbing. Failing to defend a military attack means killing one of your characters. Failing an intrigue attack means you throw away cards from your hand (which can be crippling under – say – the Lannisters intriguing the crap out of you every single turn). Power attacks simply see you getting mugged for your power tokens. Does that sound bad? It should, because it’s the first player to 15 power tokens that wins the game.

But we’re just getting started. Each player also builds a tiny deck of seven Plot cards, and every turn starts with players simultaneously picking one. The card you pick will have a spread of numbers determining how much gold you get, how likely you are to go first (or last, if you like), how many cards you have to discard down to at the end of the turn, and a special power.

What’s lovely about these plot cards is that you only pick them back up once you’ve played all seven. So whatever strategy you had in mind when you built your deck is something you’re going to have to work with through thick and thin. Again, it’s very Game of Thrones. Want to build a Stark deck that’s all recruitment, wolves, swords and soldiers? Nothing could be simpler, or more satisfying. You’re playing card after card, and slaughtering all before you! 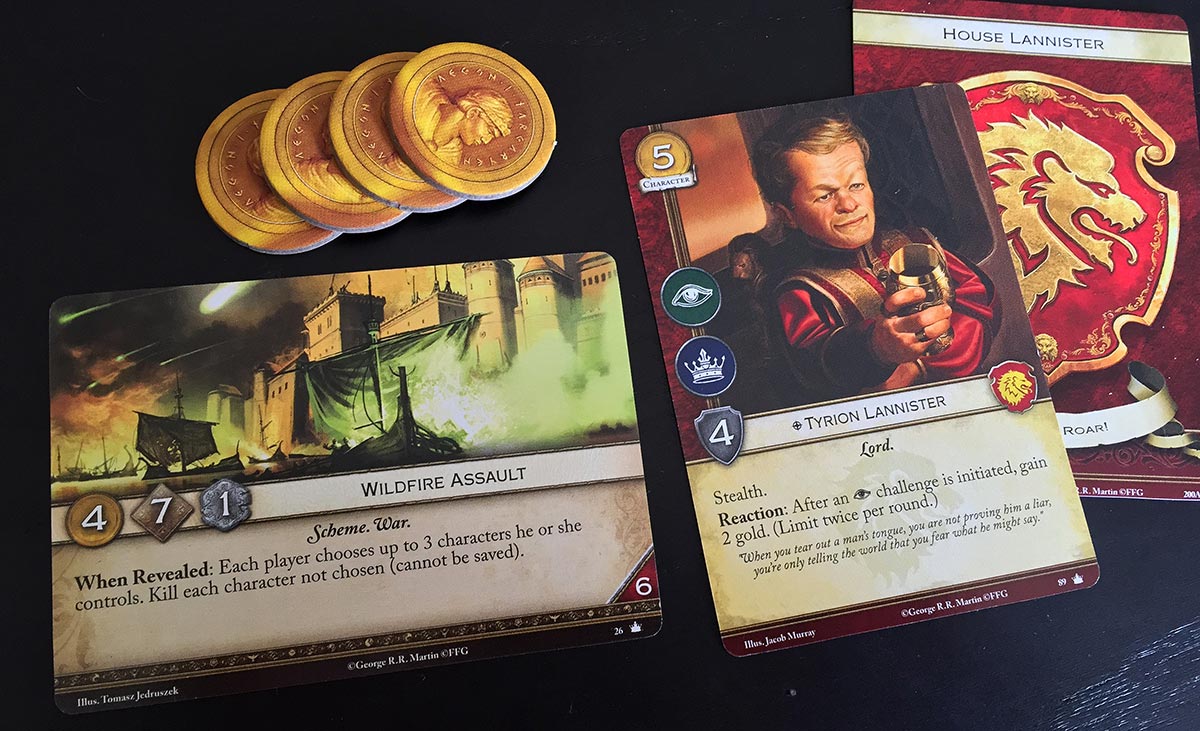 …But if your opponent’s packing Wildfire Assault in their plot deck, they’ll have the luxury of not just being able to make a fool of you by decimating your army, but wondering when best to do it. Probably around turn four, when all your high-income plot cards are spent.

And they might be making a fool of you in front of an audience, because Game of Thrones is great 2 player, but also perfectly strong with 3 or 4 players. It works in exactly the same way, with the addition of a brief draft phase where players take turns picking from a dwindling selection of “Title” cards. Each offers a different bonus, but also randomly pairs you up with one player who you “Support” and can’t attack, or is your “Rivals” and you get bonuses for attacking.

Best of all, the Crown Regent lets you redirect attacks. It’s the most satisfying play I’ve made in ages- watching an opponent marshal all of their Intrigue at you, and then quietly palming them off to fight the guy next to you instead. 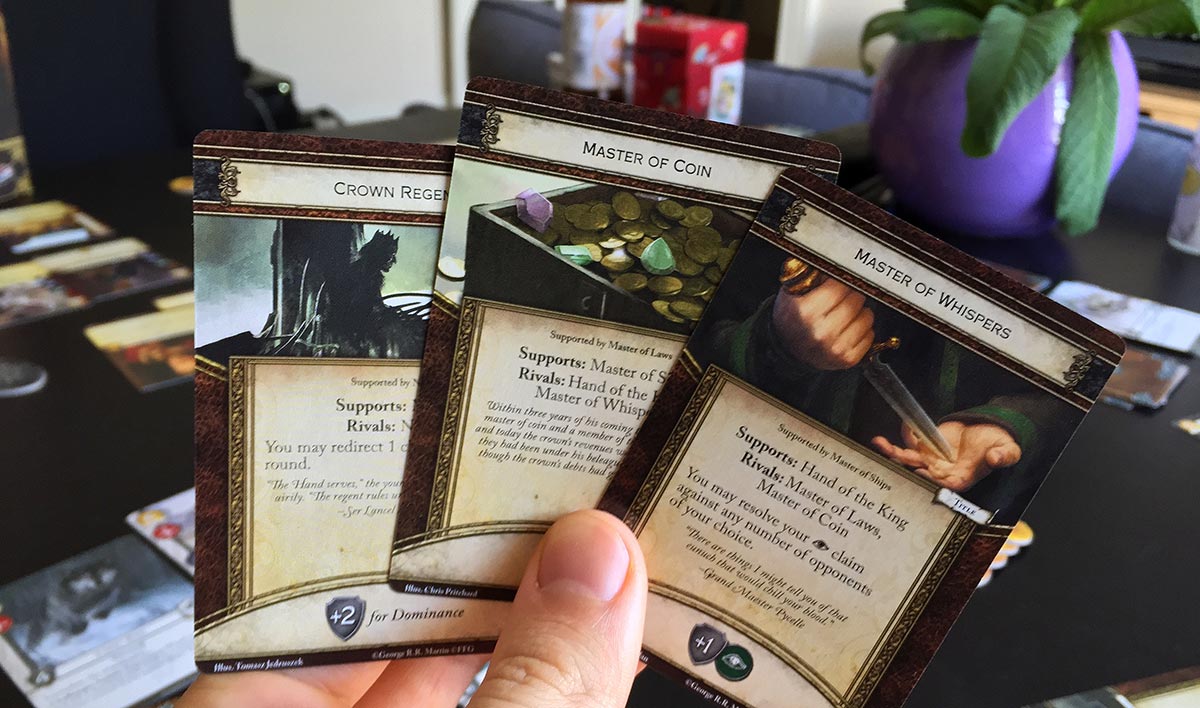 Speaking of satisfaction, I’ve never encountered an LCG that immediately offers so many exciting play styles from its factions. It’s not that they’re particularly distinct, rather that they all manipulate the central game in such a fun, thematic way, and the box boasts 8 (eight!) of them (two more than the first edition).

The sinister Greyjoys receive fantastic bonuses if their attacks are unopposed, but your opponent knows it. Hilariously for a house that’s mostly known in the TV series as “the one that everyone forgets about”, House Martell decks receive benefits for losing challenges and can use the amount of cards in their plot discard pile as a multiplier. Don’t you forget about ’em! They’re just waiting to strike.

Then there are the two new factions, House Tyrell* and the Night’s Watch. If I’m being generous, Tyrell’s theme appears to be sprouting and growing like a horrible rose bush, with Intrigue challenges that deploy still more characters to the board, and family members who all increase one another’s strength. Like the book, they’re not a threat until suddenly they’re everywhere and utterly immovable.

And I’m happy to say that The Night’s Watch play nothing like any of the other ruling houses, exactly as it should be. Rather, they’re interested in protecting The Wall- a card in their deck that gives EVERYBODY +1 strength AND 2 power every single turn, but only if they oppose every attack directed at them. On top of this, they’re all about sacrifice. Cards that prevent death, or make the most of it.

Also, you can mug your friends. See “A Meager Contribution”, down there on the left: 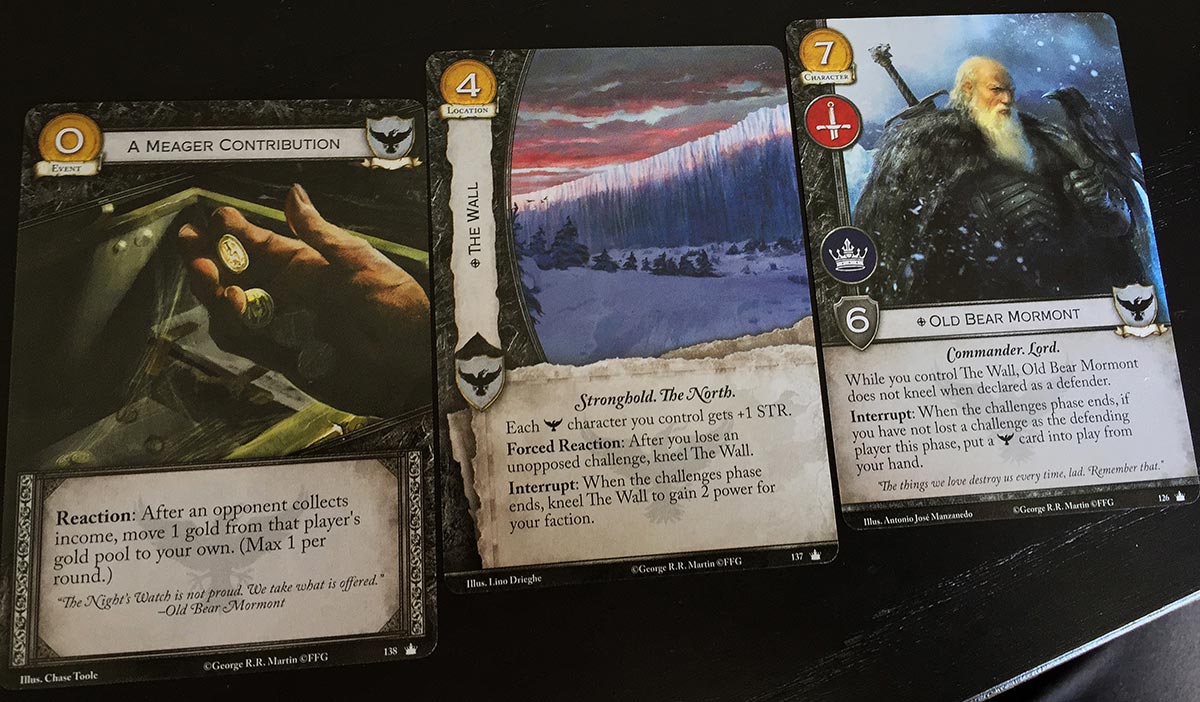 I guess I’ve focused an awful lot on flavour and tiny details in this article, but what you can take away from that is that the core game, the play and counterplay of cards, is hugely strong. I didn’t feel any need to explain it further, or wonder at its longevity- an hour with Thrones is enough to teach you why people play it, and one thing it has over Netrunner and Doomtown is a base game that’s simple enough that it immediately catches your imagination. You want to start deckbuilding straight away. Your genius deck idea is so obvious!

…Though your imagination will immediately be reigned in by the number of cards in the box. In Netrunner you can get away with owning a single starter set for a long time. Here, it’s instantly clear that you’ll want two boxes of the core set to see what the game can do, and a full three for competitive play so you can fill your deck with the best cards while still adhering to the “maximum of 3 copies of a single card” rule of deck building. Then again, it has a better manual than Netrunner, and it’s cheaper to get into right now, and if you and a friend each buy a core set you could split the factions and both walk away with four semi-complete ones… !

But these difficult consumer purchases can wait. Don’t worry, friends. Winter is coming. For now, just know that if you want to drop £30 on buying the core set come September, you’ll have plenty of fun with it. 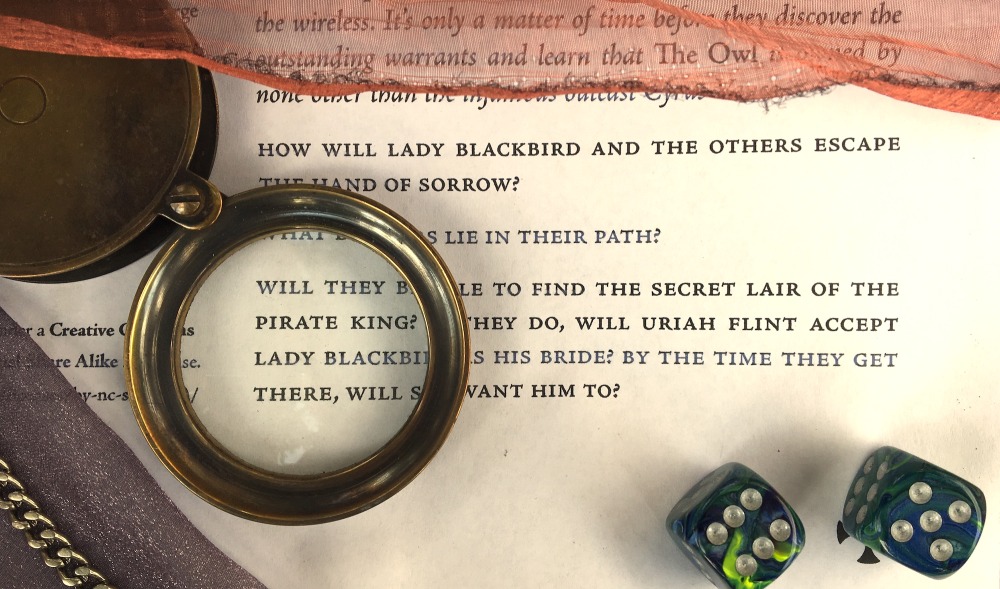 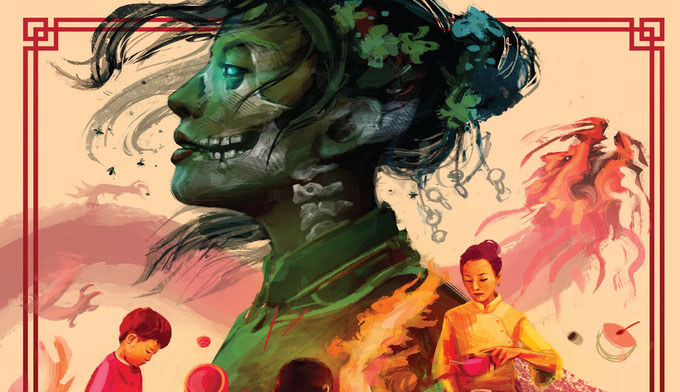 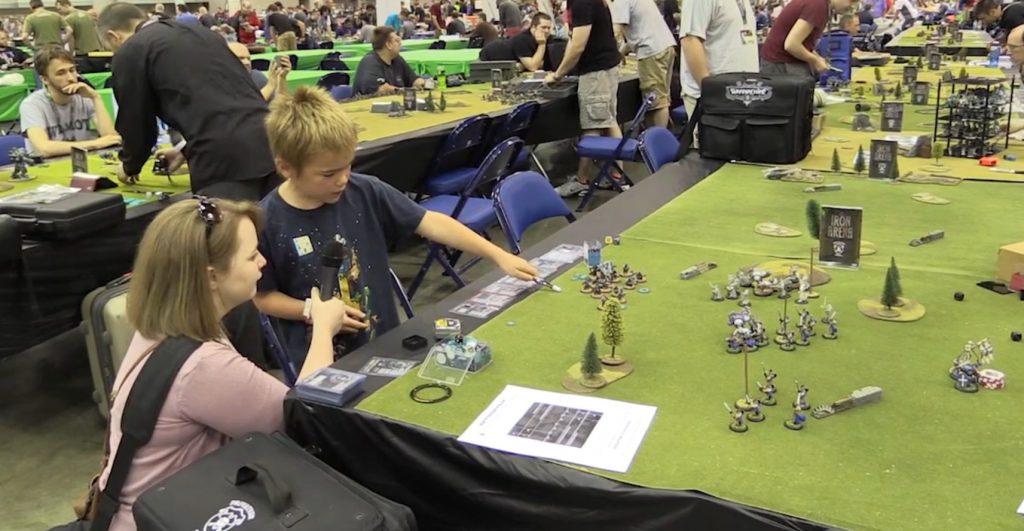