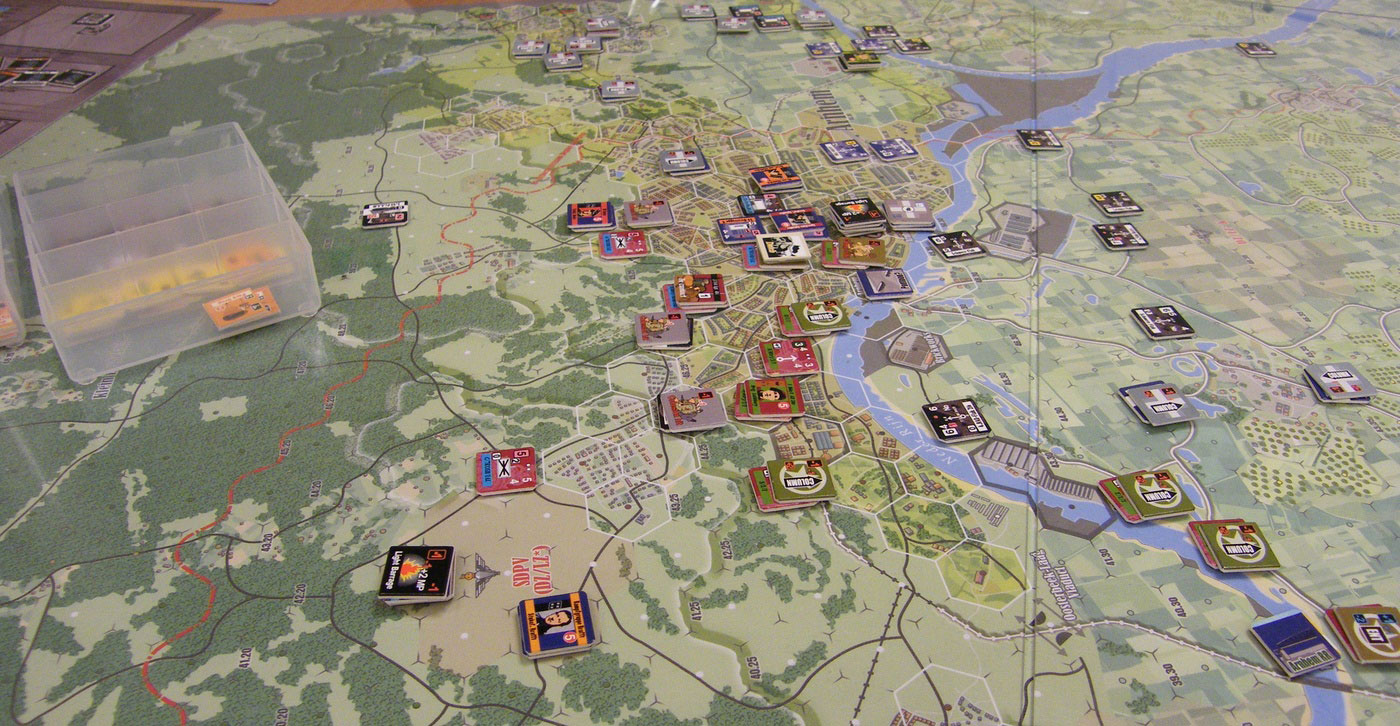 (SU&SD is proud to introduce Matt Thrower, Pro Wargamer, who offered to cover wargames for us. It all sounded a bit suspect, so we sent Brendan to investigate.)

Matt: Hi there! Come in, come in. Did you have a pleasant journey?

Brendan: I don’t know. What was that waste I had to cross?

Matt: Not now, Brendan. Come with me. The US has declared victory in the war on terror.

Brendan: Right. Wait, what was that? And how do you know my name?

Matt: There were grim days after Somalia and Pakistan fell to Islamists, allowing terrorists to steal one of the latter country’s nuclear weapons and detonate it in France. But once the US stabilised democracy in Afghanistan, and strong-armed the Saudi royals into relinquishing power to elected politicians, the appetite for terror in the Middle East diminished in favour of peaceful protest.

Brendan: I didn’t see any of this on Twitter…

Matt: No, this all got played out in astonishing detail during a game of Labyrinth last week.

It’s rare to find a board game straying into such politically sensitive territory, but for the genre that Labyrinth belongs to controversial politics and opinions are par for the course. It’s a “conflict simulation”, more commonly known as a wargame.

Brendan: I know those! They’re the ones the game shops try and hide.

Matt: OK. We know board games have a poor reputation, and within that, wargames have a worse reputation. The name conjures images of sweaty men in army surplus pretending to push panzer divisions round Poland. Even amongst those who know the reality is very different, they’re perceived as remote and inaccessible.

Brendan: That’s quite a garden too. Is that a tundra?

Matt: As I was saying, it’s a small wonder they have this reputation, with infamous examples like Campaign for North Africa (pictured) with its season-spanning play time and rules detailed enough to specify extra water rations for Italian troops to boil their pasta.

Brendan: Your house is… big.

Matt: Many modern titles, however, can be learned and played in an evening. Some people find the subject matter distasteful but, by tackling serious and sensitive issues, wargames teach politics and history in a way few other games even attempt. For those, like me, who abhor violence while acknowledging the terrible glamour of war, they offer a catharsis – a way of acknowledging the darker side of humanity while hoping for a peaceful future.

Matt: That’s the Enola Gay. Don’t touch that. The thing about these wargames is that they’re often really good games too. They have a knack for skimming off the most impressive bits of other genres and jamming them together into one tasty package. The fiendish puzzling of the finest strategy games is delivered in the form of insoluble conundrums over best use of terrain and troop disposition. The random thrills of dice and cards are incorporated, but the biggest swings of fate shaved off with clever mechanics. And always there’s direct confrontation with your opponent, the taut ebb and flow of minds clashing for supremacy. By way of demonstration, consider this game: Napoleon’s Triumph. 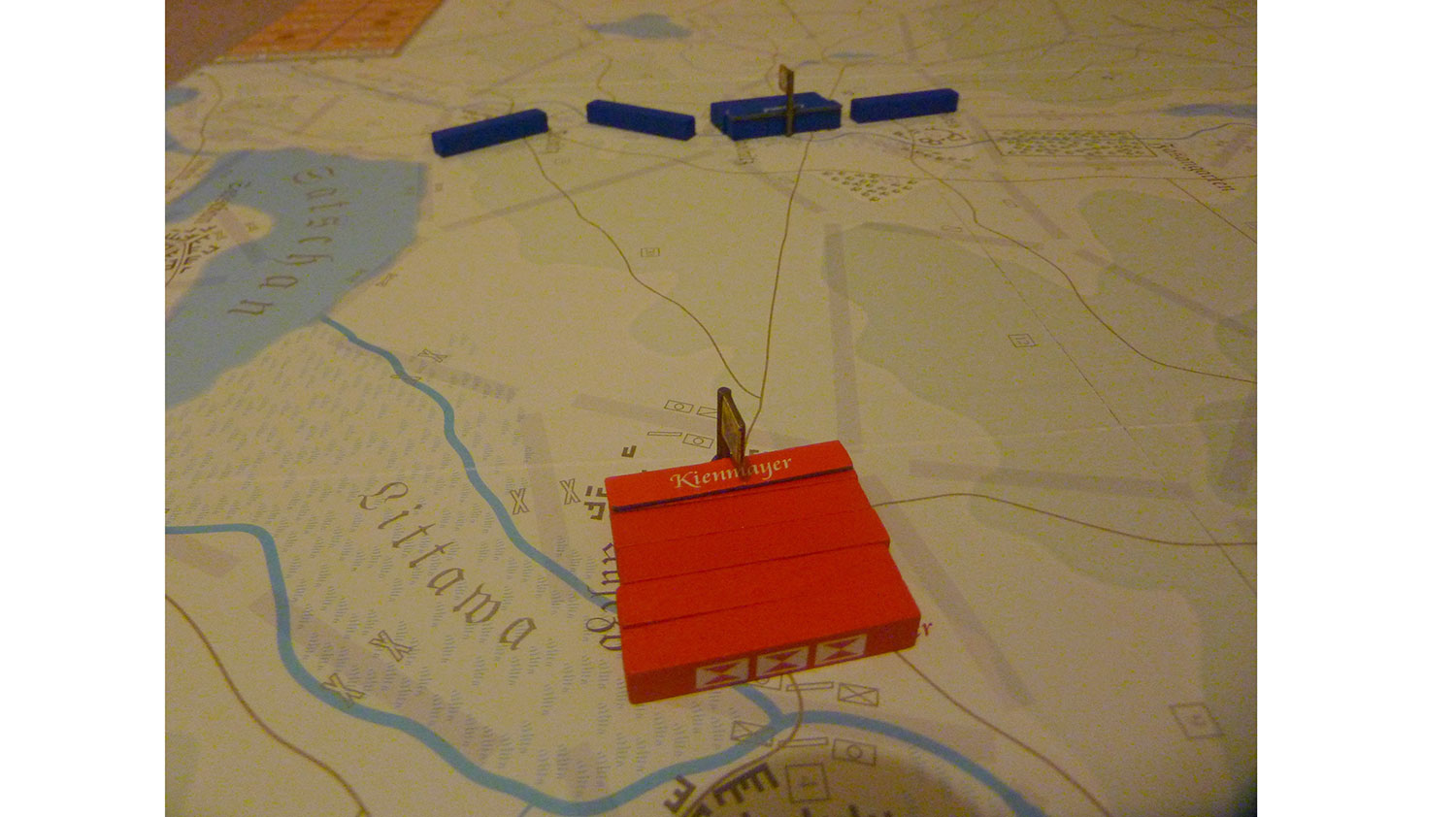 Brendan: Oh wow, it comes with a bayonet!

Matt: Sorry, can I just take that? That should be in the Colonel’s room. Anyway, Napoleon’s Triumph is both one of the best-looking games I’ve ever seen and one of the most innovative. In terms of well-known classic games it’s hard to imagine two more polar opposites than Chess and Poker, yet the designer of Napoleon’s Triumph aimed to incorporate the best of both into one game.

She succeeded, delivering a Chess-like feel to the mesmeric dance of armies across the board, their exact makeup hidden from the opposing player. The Poker comes from a unique diceless combat mechanic that sees players selecting and revealing individual units in a gradual contest of bluff and one-upmanship. One poor choice in either sphere can cause your entire game to collapse. It’s fraught beyond belief. And utterly wonderful.

Brendan: What about this one?

Matt: Aha. That’s Labyrinth, the War On Terror game I mentioned earlier. Tension is something wargames can ladle on by the bucketful. Labyrinth belongs to a sub-genre known as card-driven wargames where your forces on the board are moved via the play of cards depicting actual historical events. The interplay of hand management and board movement is a beguiling recipe: these games enjoy enormous popular and critical acclaim. It also creates sweet, screaming tension where every card secreted in your opponents hand may, or may not, completely transform the game. 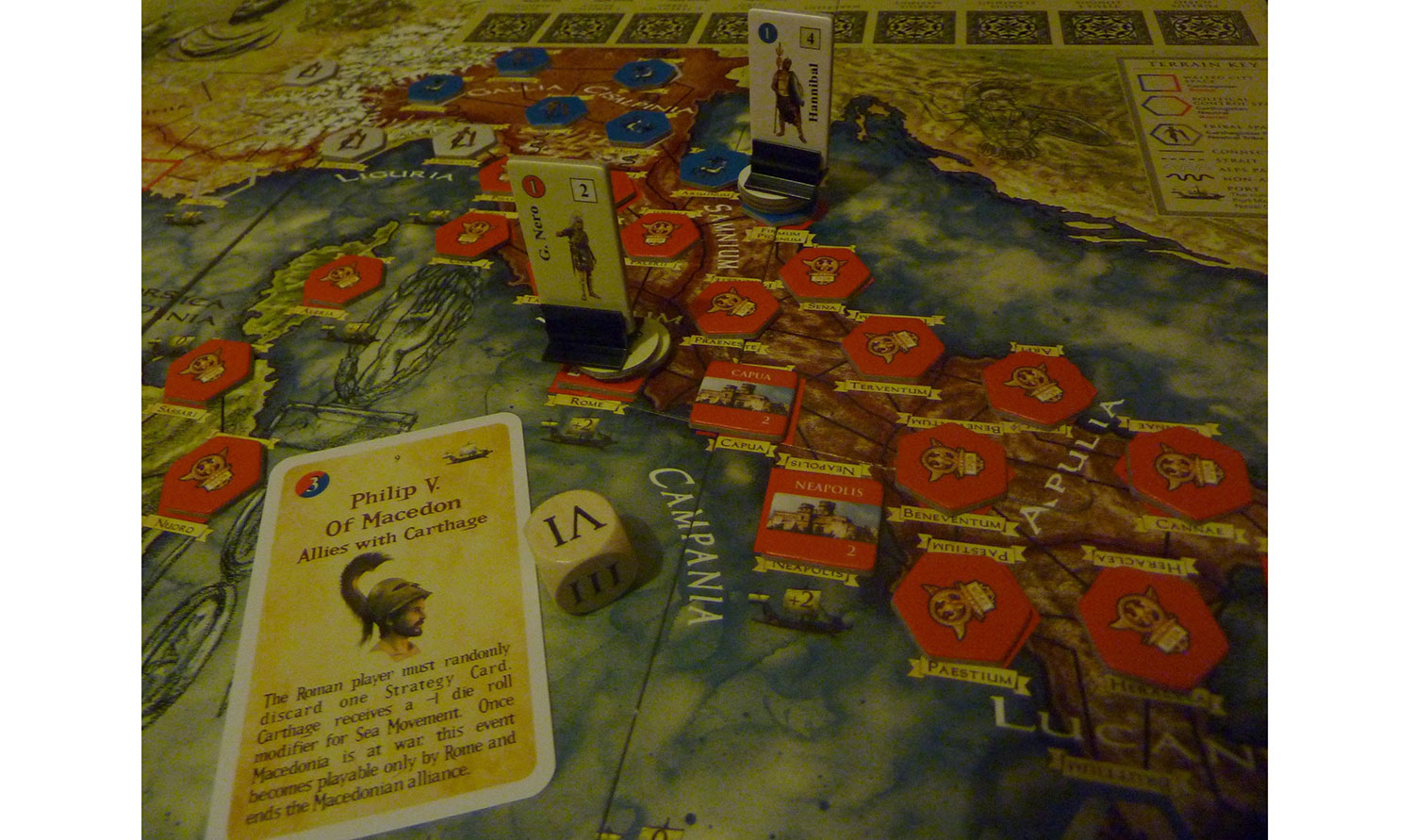 Matt: Another card-driven game. It’s called Hannibal: Rome versus Carthage and it is the only title I’ve ever played that made me bite my knuckles hard enough to break the skin. It’s a peculiar game, rife with slings and arrows and at times frustratingly random. But when everything comes together, it’s a peerless two-player experience. Another example is Twilight Struggle, a superb depiction of the cold war, which currently enjoys the number one ranking on Boardgamegeek, a spot normally reserved for the best in European family-friendly strategy games.

Brendan: Oh wow, I should look that list up on my smartphone. Hang on, there’s a message from my call provider… ‘Welcome to Niflheim. Calls will be charged at three ingots per minute’? Is… is your house near a border, Matt?

Matt: A few borders, yes. Anyhow, most of my favourite wargames are card-driven, an admission that would horrify traditional wargamers who tenaciously cling onto the joys of pushing

huge numbers of tiny cardboard squares round garishly coloured paper maps. They might be old-school, but these hex-and-counter games still include some impressive titles such as No Retreat and Breakout: Normandy. Games of this style elevate the puzzle aspects of the genre and lacking hidden information like hands of cards work well played solo, trying to tease out the best strategies.

All the games I’ve mentioned so far are excellent. But none are particularly accessible. If you’re new to wargames, or indeed to hobby board games in general, you might want to look elsewhere for your first toeholds on the rugged face of conflict simulation. The traditional starting points are block games. These use big wooden blocks, printed on one side with unit information, to create a fog of war effect by facing them away from your opponent Stratego style. Some are very complex and involved but, for no particular reason, the genre seems to contain many stripped-down, quick-playing games. Hammer of the Scots, Julius Caesar and Sekigahara are all easily learned and critically acclaimed titles in this group. Walk with me, Brendan. 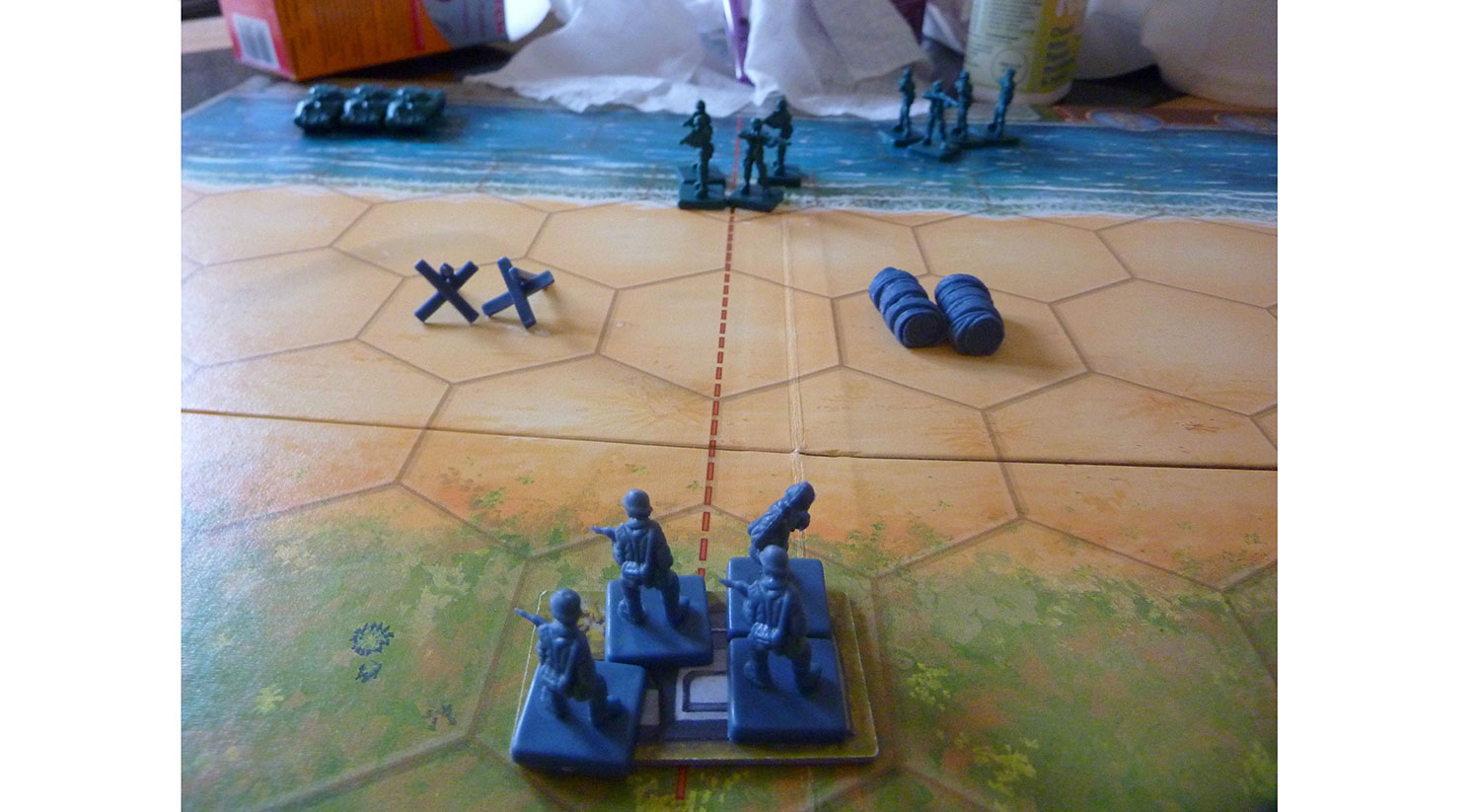 Matt: Another common suggestion is the Commands and Colors series. These all share a rule set which divides the battlefield into left, center and right areas, and gives each player a hand of cards, each of which can move a certain number of units in one or more of these zones. The simplest is the World War 2 game Memoir ‘44. But Commands & Colors: Ancients and the more recent Commands & Colors: Napoleonics are more interesting to play and offer more accurate history for only a little more complexity.

Brendan: JESUS WEPT, who is that?

Matt: That’s my waxwork of Gérard Depardieu as he appears in the film Le Colonel Chabert. I’ll just affix his bayonet. There we go. Now, if you do want to experience the most popular setting for wargames, World War 2, then have a look at my final recommendation, the Conflict of Heroes games.

Brendan: You mean these boxes with all the bullets on them? 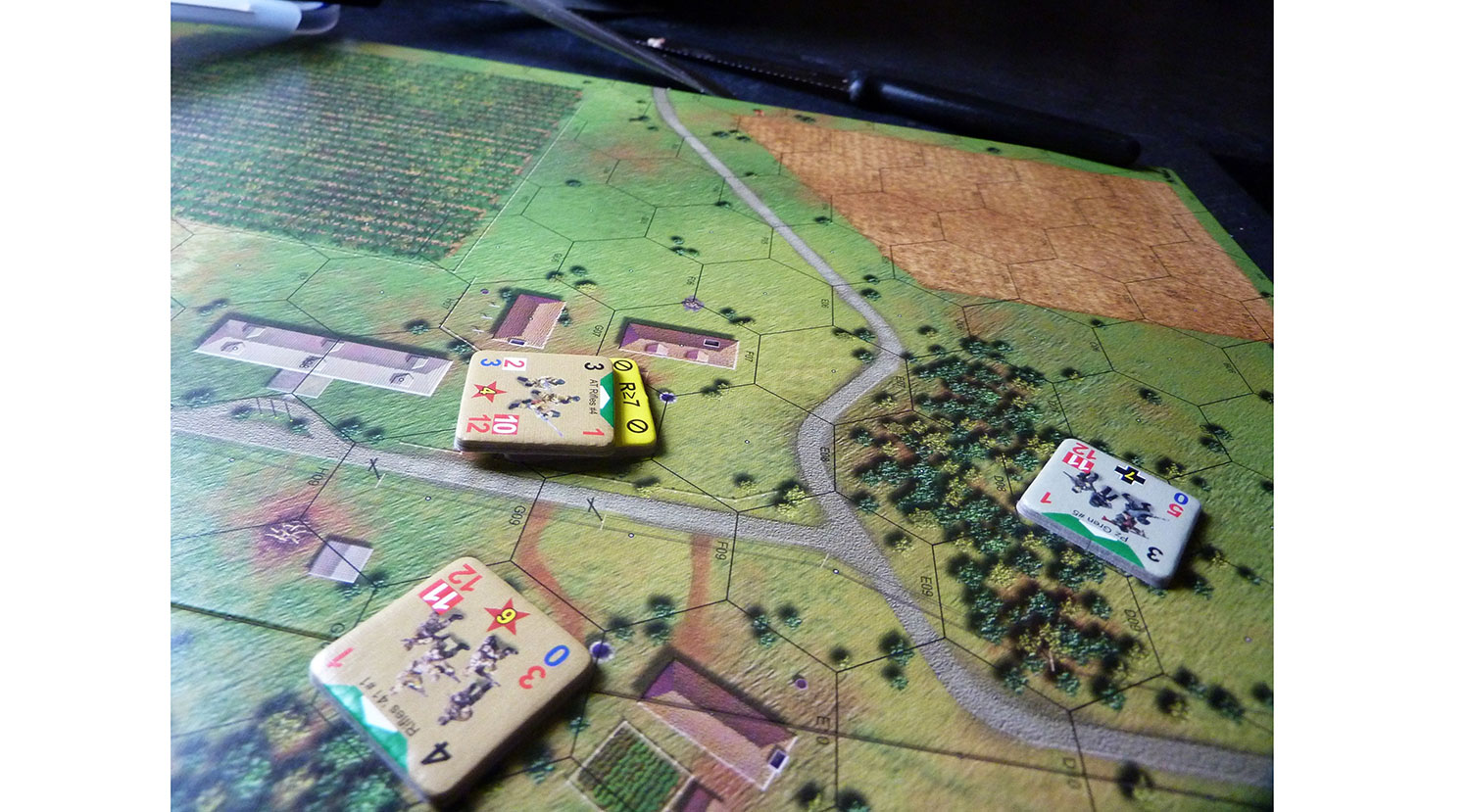 Matt: Yes. These appear complex at first glance but the games feature a range of scenarios which gradually build up the rules required, allowing you to learn the game piecemeal. Unusually for a wargame it copes with a range of player numbers from 1-4. And the actual play is exquisite, a wonderfully balanced mix of challenging strategy, rich simulation and thrilling randomness.

Brendan: Why do some of these bullets have names on them?

Matt: I don’t know where those came from. Would you like to stay and play a game?

Brendan: I think I have to get the last train.

Matt: There is no train station out here.

Brendan: I mean the last taxi.

Matt: If you’re hesitant, you may be interested to learn that many of the games I’ve mentioned play extremely well by email. There’s even a dedicated tool for doing just that, Vassal, making it easy to try before you buy. If you’ve even the faintest flicker of interest, there are really no more excuses: if you want peace, prepare to wargame. 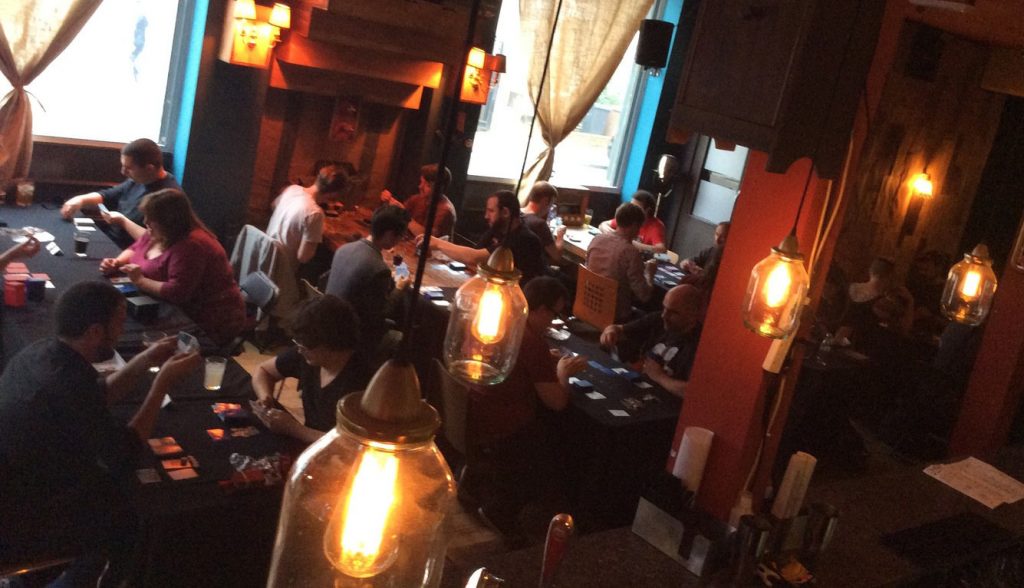 Tips for running a Tournament 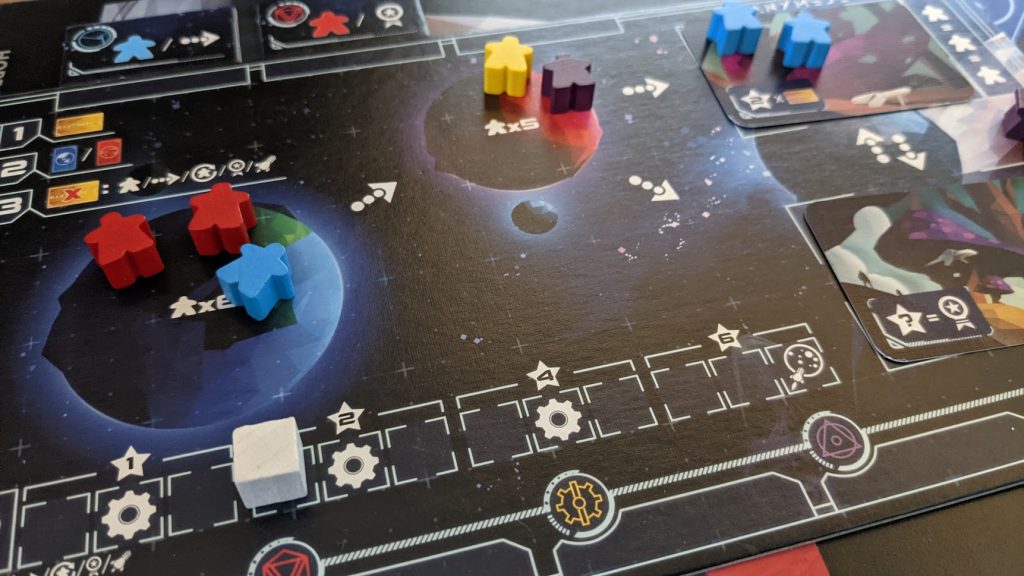