Paul: Ah yes, the games news chair. Easier to slip into than I first thought and… still warm? OH HELLO, I didn’t see you all there. Come in. Have some linguini.

Things are a little bit quieter on the games news front this week, no doubt because the industry as a whole is taking a deep breath and preparing to exhale all its most exciting announcements at Spiel 2013, that grandest of board gaming fairs, only four days hence. Still, I’ve spent my day grabbing every publisher in turn and shaking them until something exciting fell out. Here’s what I picked up off the floor. A respectful nod must also be given to both the exhaustive BGG News blog and also the fine Meople’s Magazine, both of whom we’ve turned to for help with our news.

So, let’s start with a very nice story indeed.

Eat Electric Death, a game of starship combat, has been stuck in a wormhole since 2007, when it was first announced. We thought it had been lost with all hands, but after an incredible six years, the game is finally going to see release. Creators Digital Eel, who are so high-functioning that they make both board games and video games, have announced that it will be available as a print-on-demand title. Sometimes it can take a long time indeed to bring a game into being and, at last, this is the end of what must’ve been a protracted and sometimes difficult process. Did you know that the Netrunner World Championship is just around the corner? From November 7th to November 10th, corps and hackers will be gathering in Roseville, Minnesota, to shuffle their way to victory. In preparation for all that meat damage, Fantasy Flight have updated their Netrunner FAQ. Speaking of meat damage, how is that linguini? Stringy? Yes, I thought so. Sticking with the flighty ones for a moment, we’ve also been digesting an update on Warhammer: Diskwars, a two to four-player tabletop wargame that looks like it involves orc frisbees. As you play, you flip these frisbees across the table until they overlap and engage enemy units. It’s an unusual concept, but nothing if not original. It’s also another chance for the Warhammer franchise to dig into its huge trove of particularly weird fantasy. It occurs to me that if Quinns were here with us, he’d probably be very excited to hear about any expansion news, no matter how large or small, even the news of a Hive expansion that introduces just one new piece. The pillbug, (or “woodlouse,” as normal English people would say) is… well, it’s just one piece. Just one piece. Anyway, I must assure you that Quinns is really not with us and you should stop looking. Instead, revel in the news that a Libertalia expansion has also been teased, though we don’t yet have anything solid to bite between our teeth.

If you need something shinier and more substantial, WizKids have been Facebooking a lot of pictures starships lately, as they ramp up to the next releases for Star Trek: Attack Wing. Attack Wing, which is very, very similar to the exciting X-Wing miniatures game, will be issuing it’s second wave of expansions in December and that includes the ships below. This looks like the U.S.S. Excelsior, a Klingon Bird of Prey, a Cardassian Something and a Romulan Minicab.

We’re quietly reticent about Kickstarter announcements here in the Shut Up & Sit Down shed, but it would be remiss of me not to mention Cheapass Games‘ Get Lucky, which is a reimagining of one of their most famous titles, Kill Doctor Lucky. I am not at all a fan of that game, but I appreciate many others are and the lovely James Ernest says in his pitch that this will be a better, faster game. It’s certainly one of the better Kickstarter boardgaming videos I’ve ever seen, not only because Mr Ernest looks so charming, but also because it features some of the worst murder attempts ever. This is one of the better ones… 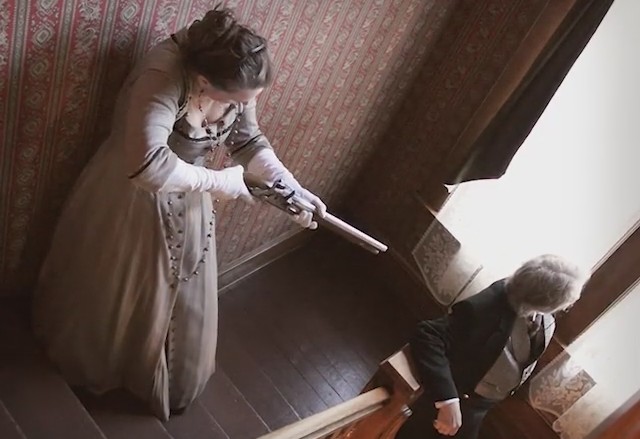 I was about done with Kickstarter and ready to put some of this meat in to freeze, but then I couldn’t help but notice how the Bones II Kickstarter was doing. Now over two million dollars has been pledged to this mind-boggling miniatures Kickstarter, which includes everything from wolves to street warriors, from trolls to a not-a-TARDIS. Have you pledged to Reaper Games? Do you use miniatures much in your gaming, perhaps switching out your family of blue Agricola disks for something more exciting, like cutesy little elves? Don’t look offended, I’m only asking.

All right, eat up, it’s time for you to leave. I have some gardening to do, now that it’s getting dark.