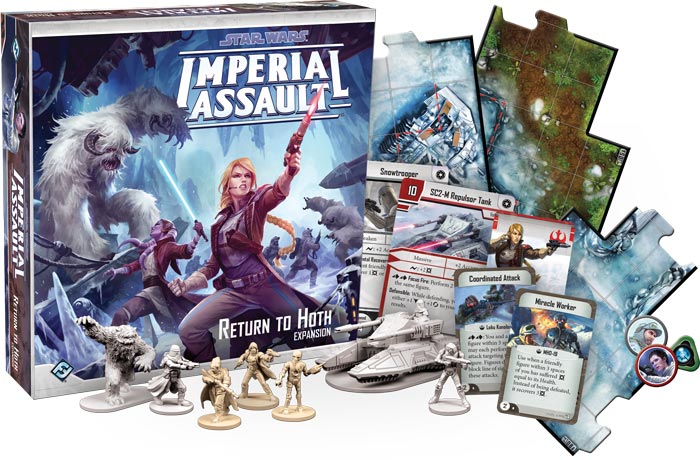 Easy stuff first. As is customary, Fantasy Flight announced a treasure trove of titles relating to existing games and IPs. Imperial Assault’s first big box expansion, Return to Hoth, will feature a new campaign and three news heros, including some kind of badass Mon Calamari with a rifle! There’s also a tank? My jealousy knows no bounds.

It’s ok, though- my chosen vice of Descent is getting an expansion, too! Mists of Bilehall will be Descent’s fourth small box expansion, adding some truly gross undead. We then have the reveal of the eighth wave of X-Wing ships, as well as a giant carrier expansion for X-Wing which physically carries smaller TIE miniatures in place until they undock. Bliss. 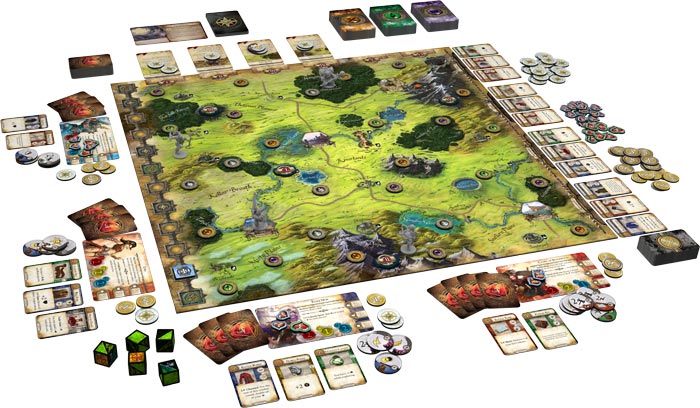 The “new” games FFG announced were familiar, too. We’re getting a new and far-improved 3rd edition of Runebound which Matt and Pip played a few turns of and quite liked. The 2nd edition was like a richer, less annoying Talisman, but we still didn’t like it enough to review it. Here’s hoping the 3rd edition will make the cut! 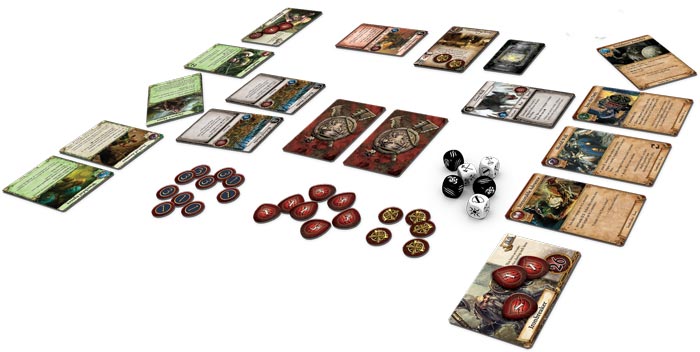 They also announced Warhammer Quest: The Adventure Card Game, which was the very last game Matt and I played at the whole con. It was nice! And also immediately recognisable as very similar to FFG’s Lord of the Rings LCG, where players have to battle monsters while also progressing steadily through a deck of horrid places. 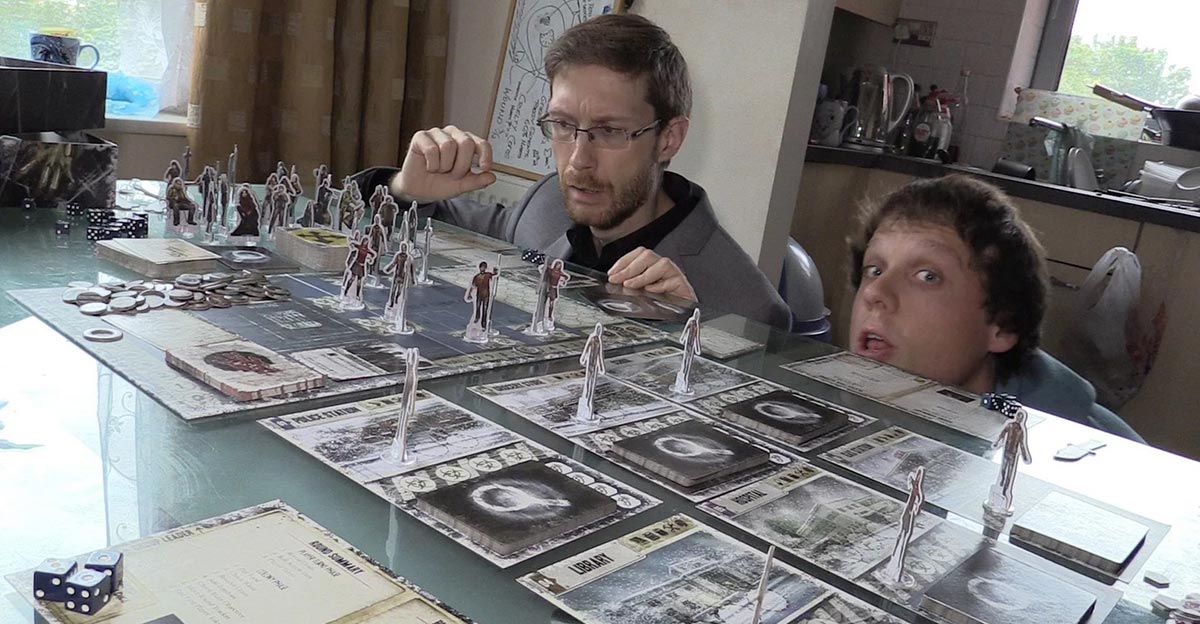 We’d just arrived at the con when we heard that Canada-based F2Z Entertainment, owners of Z-Man Games (and founder of new studio Pretzel Games) had acquired Plaid Hat Games, the publishers of Summoner Wars, Dead of Winter and Mice & Mystics. In other words, Asmodee aren’t the only publisher now flouting investment money and gobbling up smaller publishers like sweets.

What does this mean for you, dear reader? Well, it means that the designer board game industry that you love is now growing so fast that People With Money are now trying to get in on the ground floor by investing in it. That means more games, and more ambitious games. For what it’s worth it also made our job at Gen Con an awful lot easier, as these publishers are developing fantastic PR departments that want to help the press.

Are there any downsides? Sure- if any of you had any plans to compete with Fantasy Flight, Pretzel Games, Plaid Hat or the like, it’s about to get an awful lot harder.

Speaking of Plaid Hat, Dead of Winter co-designer Jon Gilmour showed us a LOVELY little game that he’s publishing with some friends later this year. [email protected] is a very funny card game of being a news team with your friends, and it’s coming to Kickstarter later this year.

First, you have a madlibs-like round where you write words on cards. Then you enter a fast-paced improv segment where you all have to work the words on your cards into segment cards pitched at you by the player who’s the main anchor- “And now Matt’s here with the sportsball report”, or “And here’s Quinns with health and beauty!” And there you are, staring at a card that reads “BEES” and “CAKE”. “Thanks, Pip! it’s a beautiful day here at the Sportsball Arena… people are getting reading, they’re oiling their, uh, balls…” you say, stalling for time.

What’s super clever is that there’s also a “Producer” role for players who might be a little more introverted or tired. They get a hand of cards referring to Breaking News, Interviews or another player Breaking In with further developments, all of which has to be incorporated by the players the instant you give them the card. It’s really, really funny. 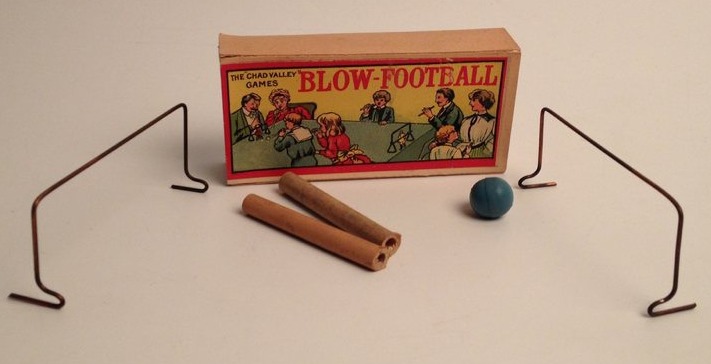 And speaking of funny, you guys should definitely read this Boing Boing article on “5 bizarre board games“. The last one is a doozy. Shame tokens, indeed.

And finally, HUGE thanks to everyone who showed up to our party on Friday! What a venue, eh? What a fine bunch of people!

It felt like a true step up from last year. Instead of just playing Two Rooms and a Boom, we had the Tuesday Knight Games guys there demoing for us, and we filmed it. Instead of getting drunk, we kept it classy. Which was lucky, as at one point I turned around and the Lukas Litzinger, Netrunner’s DESIGN LEAD was waiting behind me to say hi. 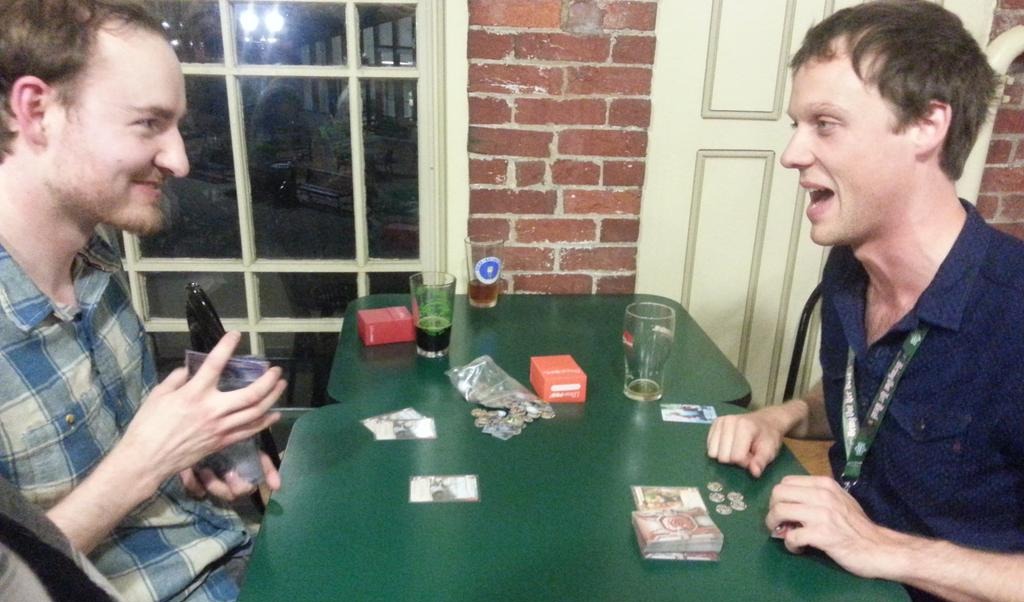 We played a game! I lost. It was beautiful.

If you get the chance, do come down next year. Gen Con is incredible, and our little corner of it felt very special indeed..