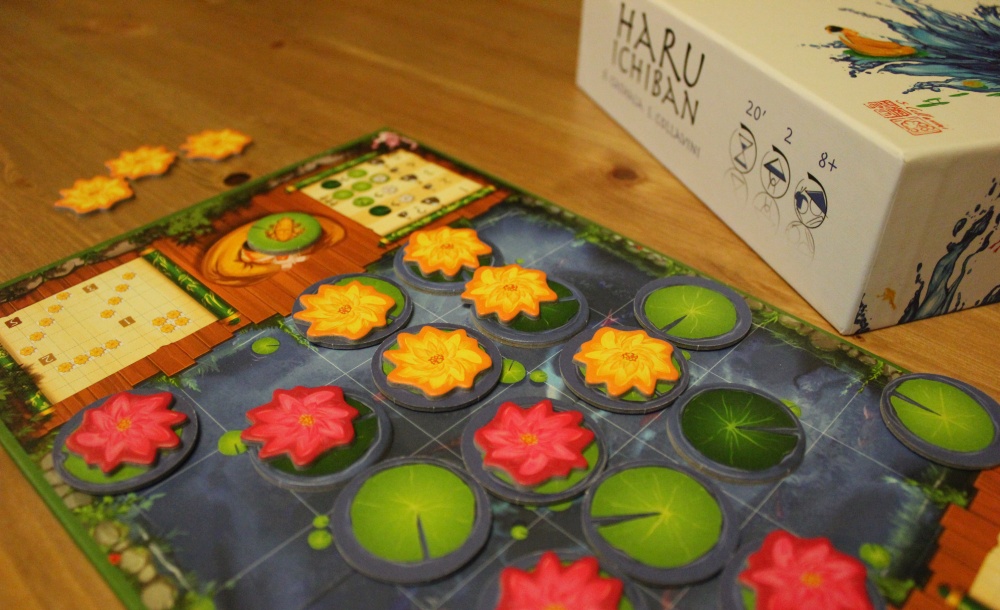 Pip: Last night I went to see Star Trek Beyond while surfing the edges of an anxiety attack. I think I cried three times, nearly threw up once and laughed for a full minute during one sequence. I’m bringing this up because Haru Ichiban is the exact opposite of that experience.

Haru Ichiban is a game about water lilies which I picked up entirely based on the cover art at the UK Games Expo and then covertly Googled because I have a habit of finding games that look adorable and then find out that that’s where their positive qualities begin and end. Lovely box art, shame about the… everything that isn’t the box art.

Thankfully this seemed to be at least non-terrible and was designed by Bruno Cathala of Cyclades and Five Tribes fame. Cyclades! I liked Cyclades! PLEASE TAKE MY CREDIT CARD, MADAM.

Haru Ichiban turned out to be a two-player game of logic and planting. You take it in turns to place coloured water lilies on pads and push them round a pond until one player has an arrangement that will net them some points. The best way I can think to describe it is that it’s floral connect four but fancied up a bit and you can pretend you are Very Serious Gardeners Doing Grown-Up Employment Business. 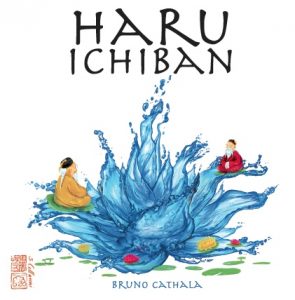 Each turn is, essentially, a series of mini games. You start by working out who will be the Senior Gardener. All of the water lilies have a number from 1-8 on the back. You pick one each from the ones face down in front of you. If you get the higher number you are the Senior Gardener and you get to feel smug about that.

The perk of being the Senior Gardener is that you get to look at the pond (a 5×5 blue grid populated with 16 lily pads) and decide which empty lily pad you fancy dolloping a lily onto. Dolloping being the technical term for what we gardeners do to flowers. The awful, inferior Junior Gardener doesn’t have that luxury. He or she has to dollop their stupid flower onto the one lily pad that is dark green. Enjoy your dark green lily pad, sucker!

Irritatingly, to make up for their Junior-ness and limited ability to place flowers where they want they then get to enjoy the next mini game which is where you get to shunt a lily pad or line of lily pads one square in any direction you can without going out of the pond. You might be doing this strategically in order to move yourself into a favourable position for getting one of those scored floral arrangements – four in a row, a 2×2 square, four in a diagonal, or the mythical FIVE IN A ROW OR DIAGONAL which will instantly win you the game. 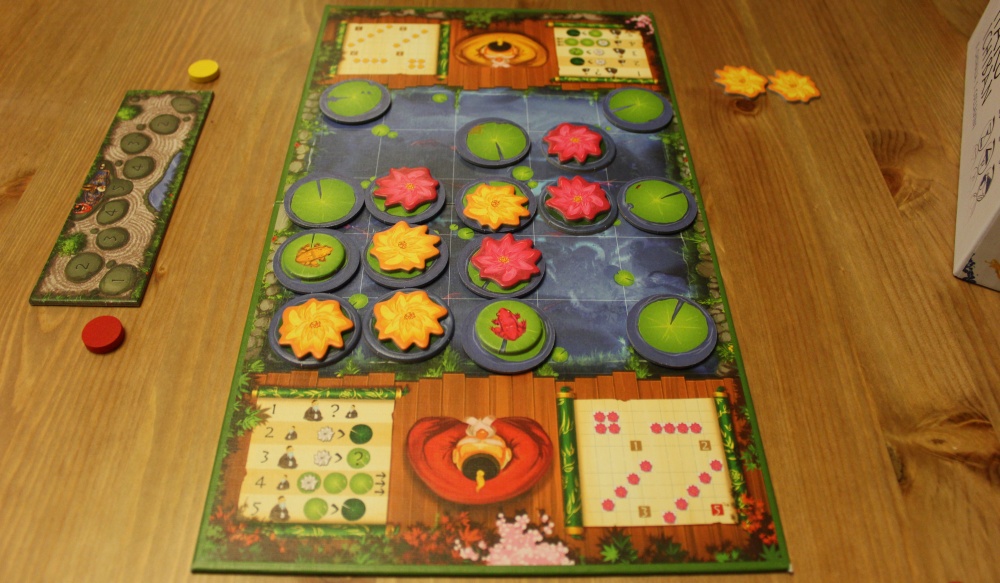 You might also be doing it strategically (read: spitefully), shunting your opponent’s lilies hither and yon to inconvenience them as they garden their way towards victory. Can’t make a line when one of your lilies is ever so slightly out of position, can you? Who is laughing now, pond face? Me. I am. At you.

Then it’s back to the beginning and you decide on a new Senior and Junior gardener. The round ends when a scoring combo of flowers is achieved and you get the specified points. You then start a new round, resetting the lilies to their original colours but sticking with the arrangement of pads that you were left with at the end of the previous round.

I really like that aspect because it means the board changes each time and you need to think about how that’s going to affect your play. I think I also like that there’s a persistence to the little pond. It’s been changed by the faffing about of the Junior and Senior Gardeners as they engage in water garden employee spitefulness and I like to imagine the frogs and other creatures rolling their eyes and just trying to go about their business.

Oh! I forgot the frogs! There are two on the board and you use those if you both turn over the same number at the start of a turn. 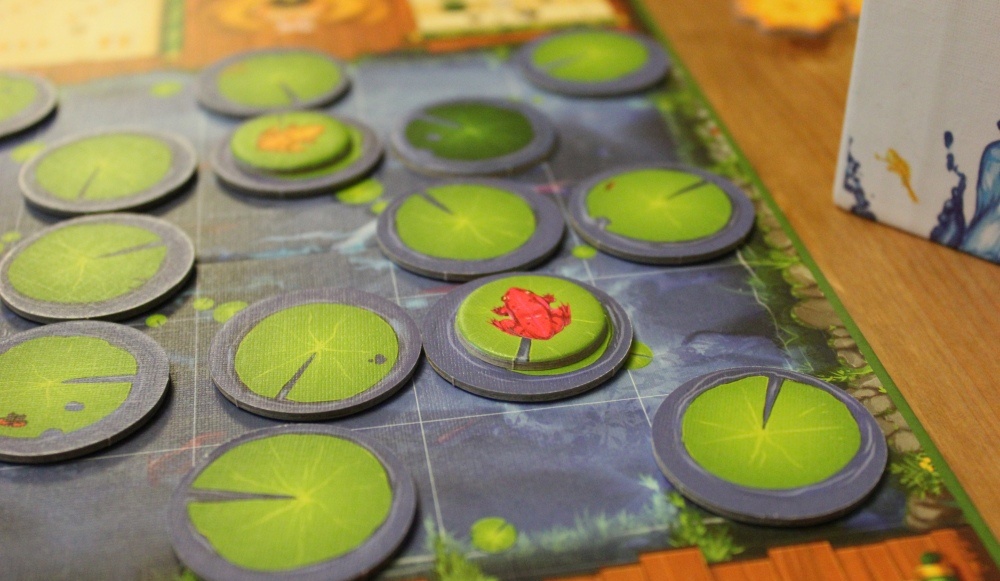 Instead of having a Junior and Senior Gardener, you sort of have two Uneasy Mid-Level Gardeners and they are forced to put their lilies wherever the frog of their colour is. The strategic bit of this is that you can then move your frog to a new lily pad. To determine who of the Uneasy Mid-Level Gardeners goes first in placing the frogs it’s whoever made a ribbet noise first when the tie happened. Gardening is kind of ridiculous sometimes.

I really liked how the mini games interacted as turns progressed. Sometimes it would end up being better to be the Junior Gardener in order to get the chance to disrupt a growing row of plants. Other times you’d keep a mental tally of how many high numbers you and the other person had turned over so you’d have a sense of how likely you were to be Junior or Senior next and act accordingly.

If I was Senior Gardener and I knew I was running low on high-numbered lilies I’d use the final bit of my turn to take a gamble and put the dark lily pad somewhere I wanted a flower, assuming I was likely to be Junior Gardener next turn.

Sometimes there are annoying moments where you suddenly realise the flowers are arranged in such a way you can’t possibly win, or that there is no way to stop your opponent winning. That’s the worst feeling. You know the one I mean? Like how in connect four you suddenly see that they have two spaces to play in which will win them the game and you can only place one token and they look at you over the top of the connect four board and smile that smug, serene smile and you can barely force out a “Well played” from between gritted teeth?

That. Except there are water lilies and the whole thing seems to be about being zen and logical so being that vexed isn’t even thematically appropriate so you consider being really magnanimous in defeat but only for as long as it takes to lure them outside to the real life lily pond I have in the garden and give them a good, hard shove.

It’s a quick game once you have the hang of it and works really well for bite-sized play sessions. It’s really hard to chat as you play because there’s a lot of thinking and predicting and then realising you predicted wrong and re-predicting. So it’s not really a social game or a down-the-pub game like Skull. But Haru Ichiban is neat. It’s no abstract game classic like Hive, but it’s neat and cute and very satisfying if your planning actually yields results!

Feature: A Day in the Life of Matt’s Game Collection! 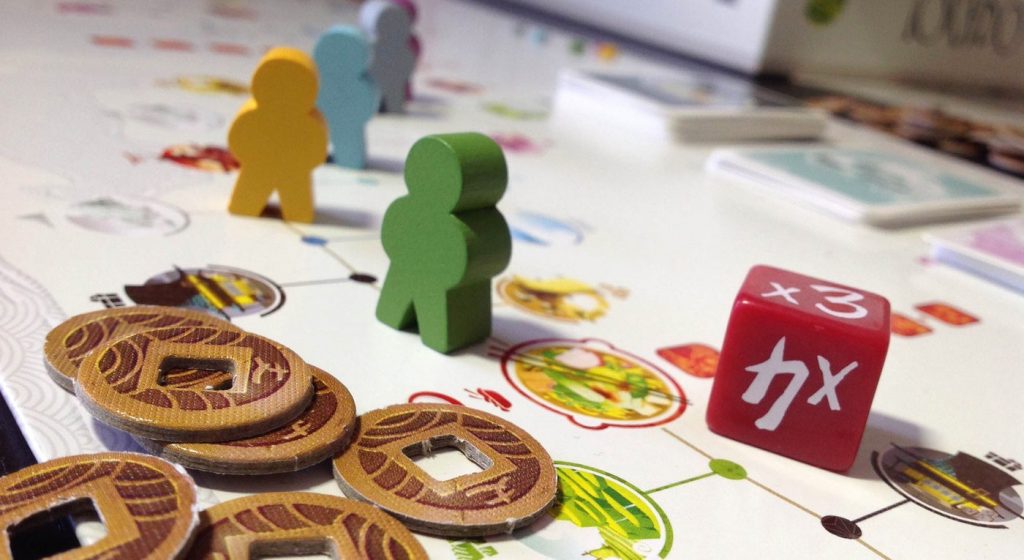