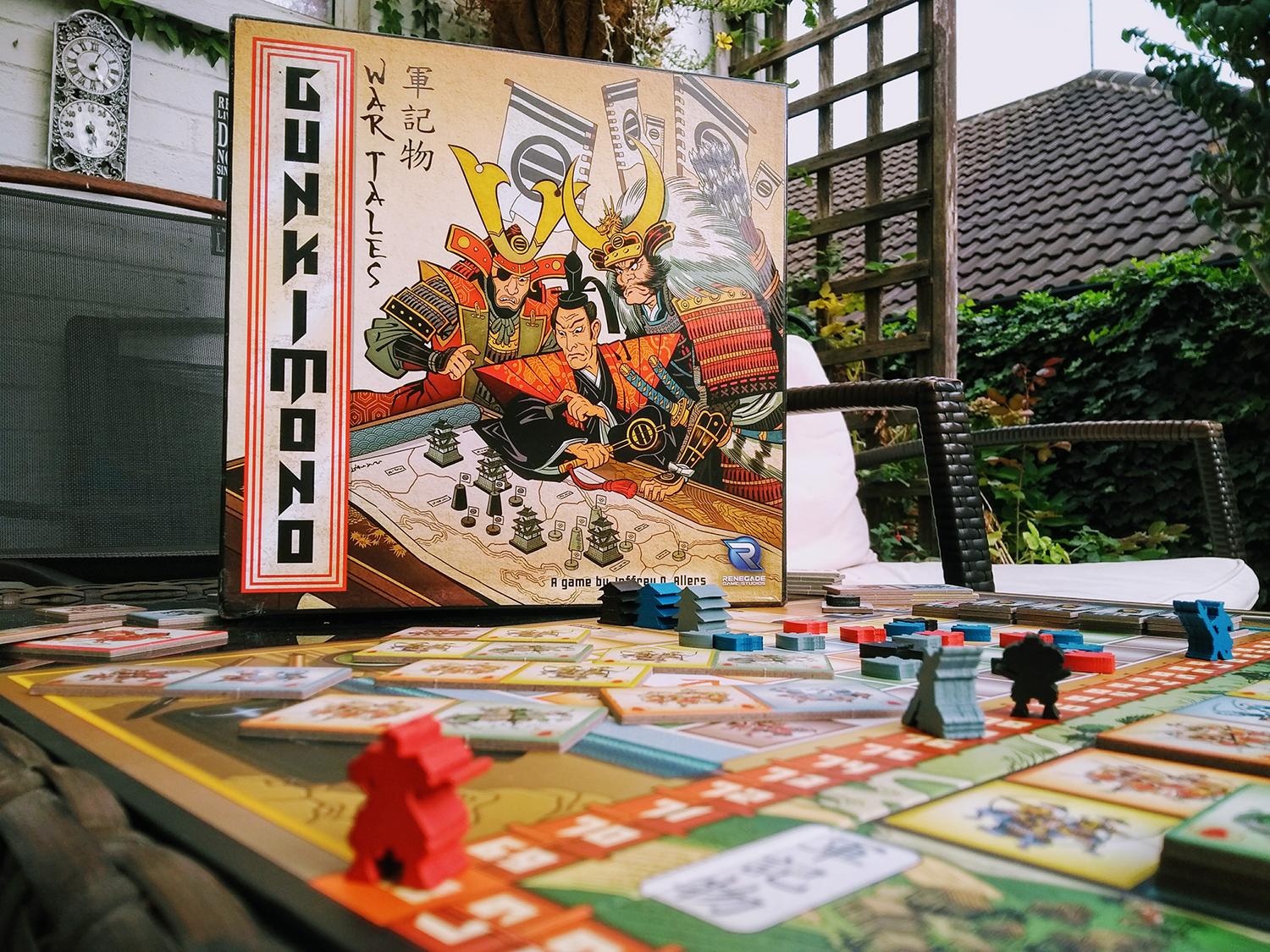 Paul: Board games are strange. I never know what I’m going to like next and no matter what preference I profess, I am always, always being surprised in a way that keeps me as skittish as an anxious antelope. Do I like fantasy settings? Sure! Eurogames that emphasise player interaction? Party games of bluffing and misdirection? Definitely!

And yet naming the game that will next make me grin is as exact a science as reading tea leaves blindfolded from across the room. It’s like I’m in a raffle I never entered, holding ticket numbers I can’t read that win one mystery prize after another. Today, Paul, you’re going to enjoy a  game where you… pile samurai dominoes on top of each other? Okay! 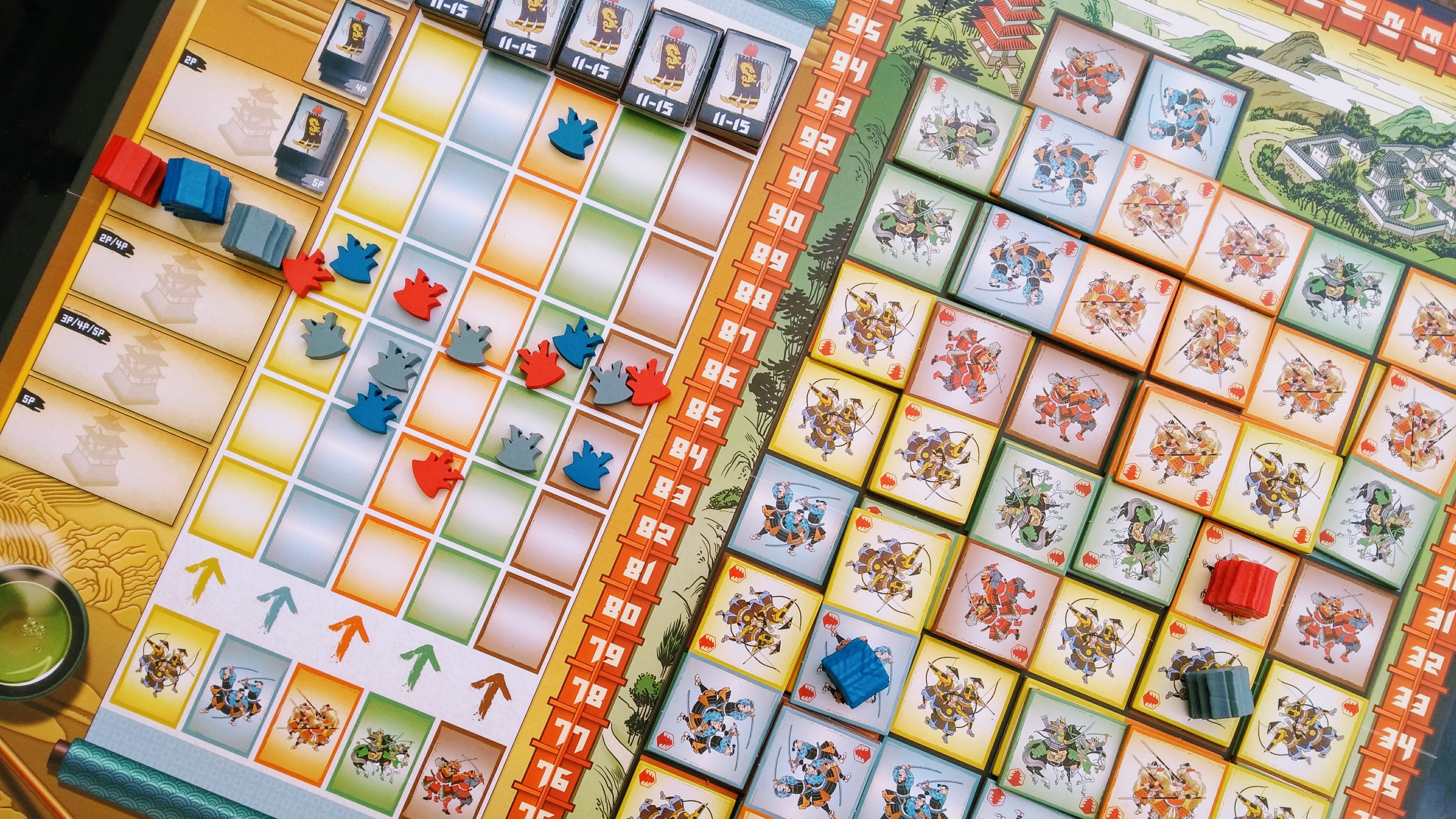 Picture the scene: It’s Feudal Japan. The battlefield is empty. You, commander of the Blue Strongholds (For why would you ever pick any of the inferior colours?), are determined to win the day. As every general knows, the two keys to victory are in spreading enormous formations of warriors across the battlefield and fortifying their positions with cute little castles. Will these soldiers need to fight? Not so much. As long as you keep constructing the largest concurrent collections of the same class of combatant, those warriors may as well lay down in the field and count the clouds in the sky. Nobody’s going to get hurt.

Gunkimono is all about filling out spaces and making shapes, almost a kind of tactical tetris. Each turn, players lay one of the two-coloured tiles in their hand somewhere on the board in front of them and then, for each half on the tile, either score victory points equal to the size of the coloured area contiguous with it (what the cool kids call a formation), or score honour points according to the number of stronghold symbols printed. They choose this separately for each half, so one half can connect to a sprawling section of yellow archers and score big, while the other half can earn a couple of honour points that gently nudges the player up the honour track of that type. That’s this track: 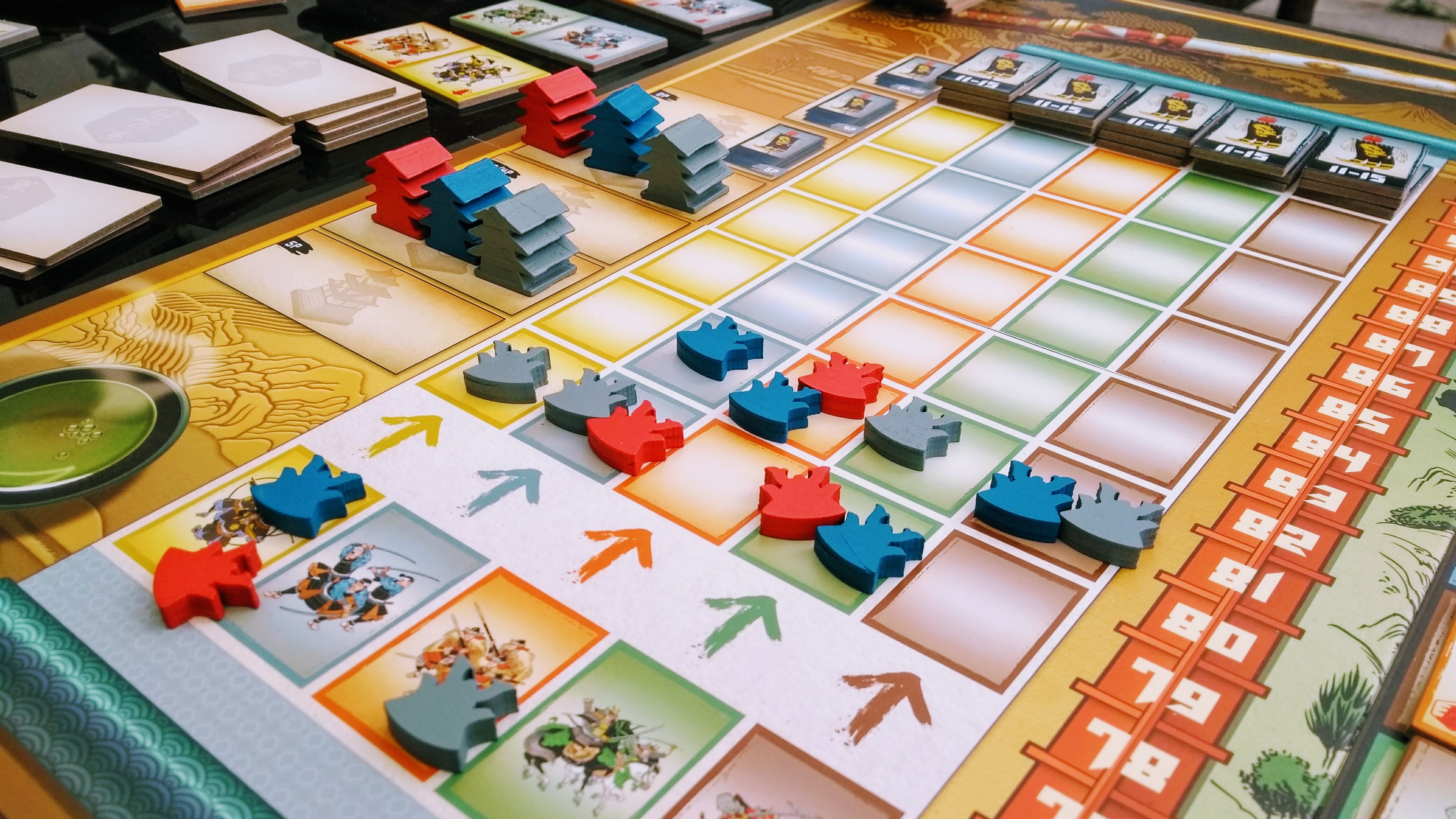 Points, of course, equal success, but what value honour, you ask, as any wandering ronin might. Well, those five tracks correspond to the five colours and five flavours of warrior in the game. Advancing each of those an equal amount unlocks a stronghold, one of two cute little castles that you can drop down into this multicoloured melee to declare “Hey! Hands off! THIS IS MINE!”

Otherwise, if you’ve just connected two large collections of red spearmen to score big points, what’s to stop the next player simply dropping another domino right next to it, extending it further and scoring even more? Very little, beyond placement rules that say the same colours can’t be placed on top of one another. Otherwise, tiles are often placed atop one another, as well as side by side, meaning that each game gradually grows modest mesas and shallow valleys of rainbow-coloured armies. 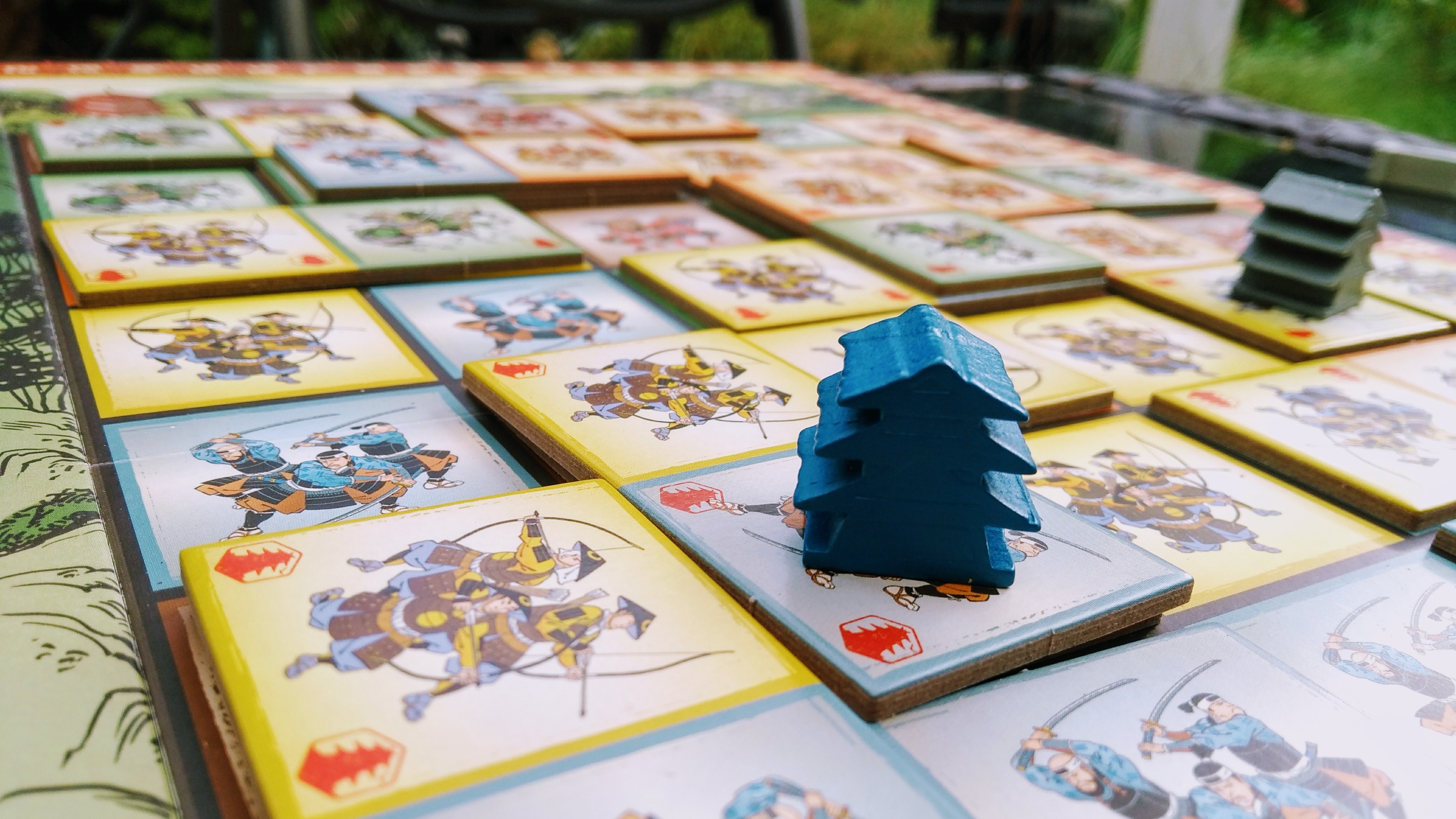 But once a stronghold is in place, a claim is staked and a formation of warriors is locked down for good. Its owner can’t add to it further, but that formation will nevertheless score victory points for them every turn until the end of the game. The only problem here is that there is absolutely nothing stopping another player from interfering with that by, oh I don’t know, dropping their tile right in the middle of the formation and slicing it in two. That would be rather cruel, though, don’t you think? And what kind of a player would sacrifice scoring more points for themselves just to ruin someone else’s fun? Oh, you there, at the back? I see. I see.

I think you’re getting the flavour of this devious dish, aren’t you? It’s almost like a jigsaw where you sometimes go for the jugular, each move presenting not only the choice of whether you make a short-term investment to score more points, or a long-term investment toward unlocking a stronghold, but also whether you crash some other player’s party and cut down the titanic territories they’ve had the temerity to trace out, popping burgeoning egos that have bloated like bulbous balloons. 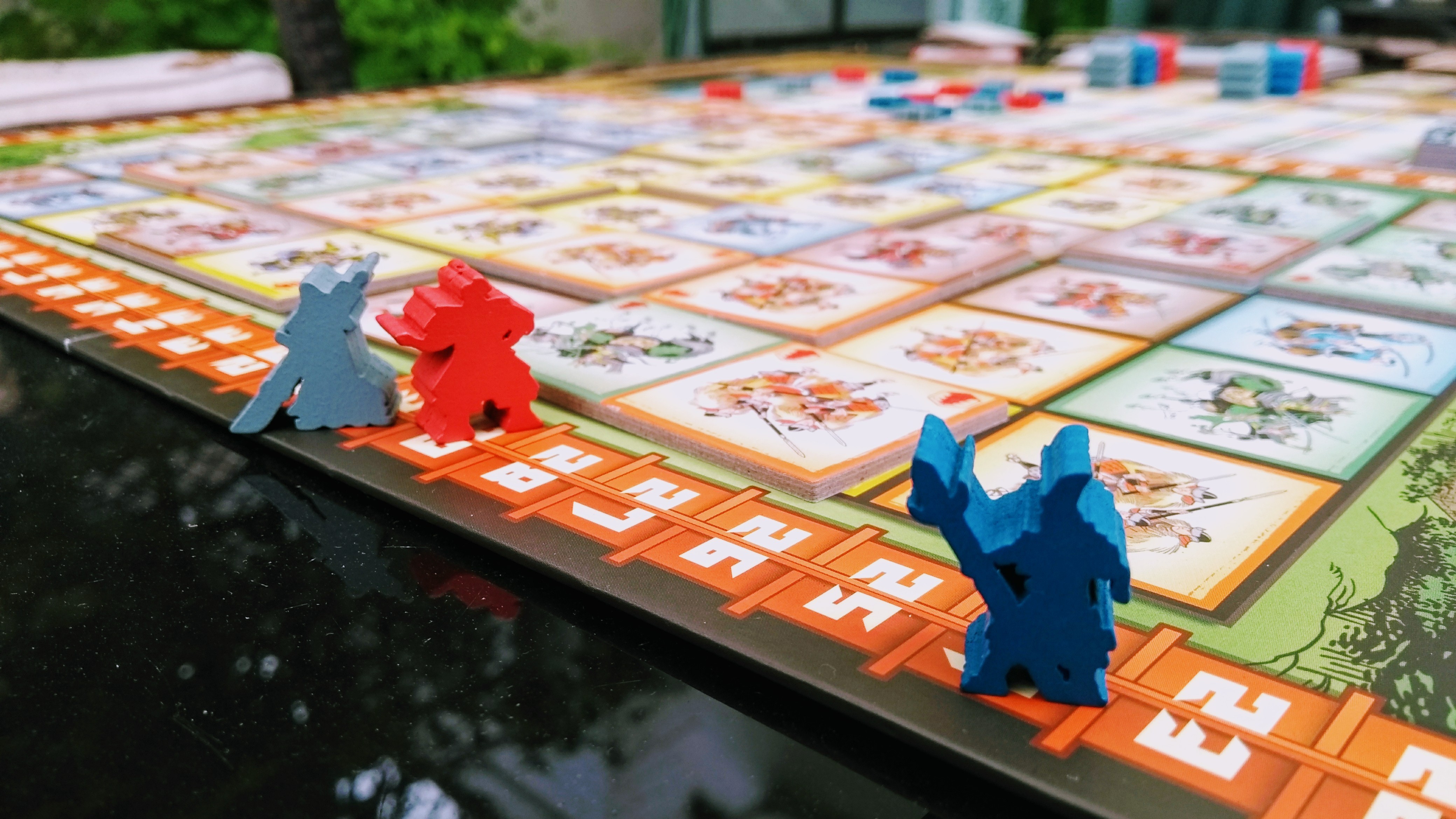 There’s nuance here, too. Each player starts with five, half-sized, single colour pieces that they can either lay by themselves or place under one of the standard tiles to prevent it from overhanging if it extends out as part of one of those ever-growing tile piles. Sometimes the placement of a single colour in just the right spot, at just the right moment, leads to an explosion of points, and since every player is holding and replenishing a small hand of three full-size tiles, as well as starting with these five petite pieces, everyone is always considering a variety of different options. Gunkimono is not a game where you can plan far ahead, but it is one that constantly presents choices and challenges you to adapt to an ever-changing board.

Your investment in the game only grows, too. As that pile of sedentary samurai stacks up, as everyone’s first and then second fortresses are deployed, building or smashing colour formations becomes even more important. Past unlocking fortresses, more honour points will also slide you up to the top of the tracks where, if you can crest them, face-down tokens hide more victory point rewards. Getting to the top of more than one track is not easy, so which do you race for? 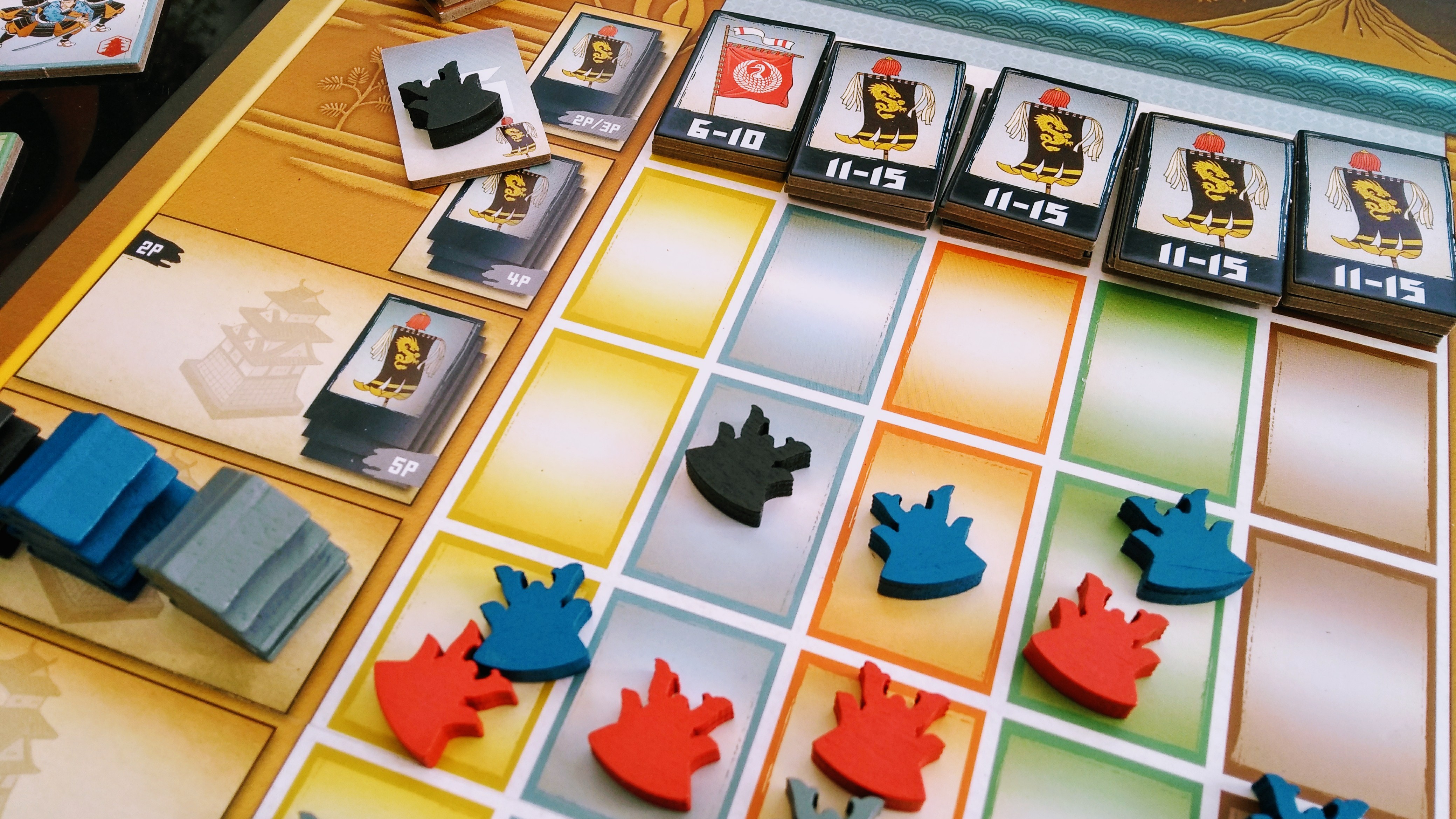 That feeling of being in a race, or even multiple races, is central to Gunkimono. There’s the eternal temptation to score points immediately for whatever formation you can grow this turn and, since the early game has everyone expanding these, it seems like the easy choice. Forgoing that scoring to climb up an honour track sees you quickly fall behind and it’s a painful sensation, but it’s also the key to long-term success.

When the last of the game’s tiles is drawn, a short, separate stack comes into play, somewhere within which is a tile that will end the game and leave you all staring at a patchwork military mish-mash, a curious quilt of chaos that you’ve sewn together and then torn apart many times over. You began by sedately laying your pieces to create pleasant patterns, but by the end you were squabbling over every spot within reach. It was more satisfying than you expected, wasn’t it? 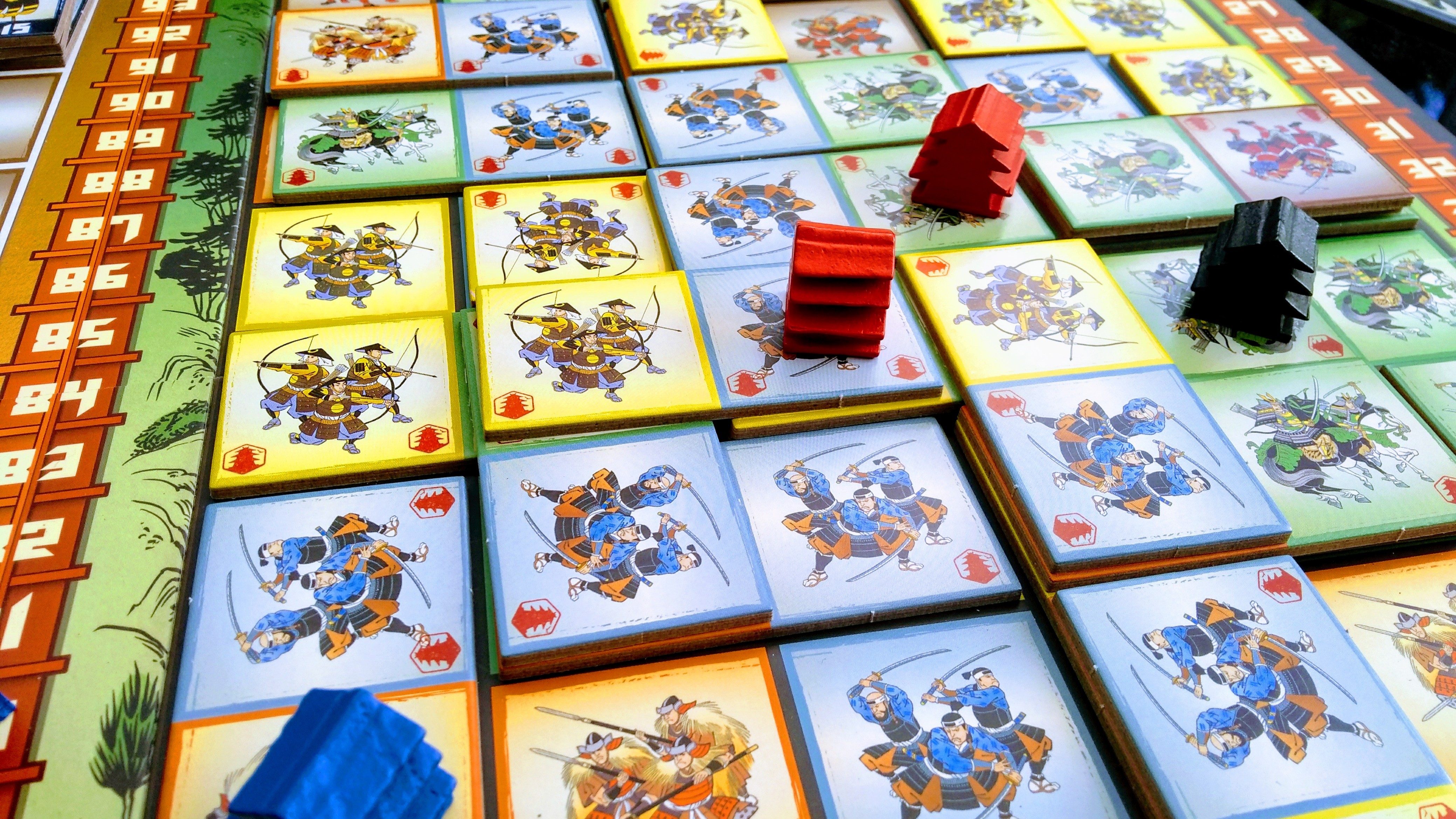 There’s just time for a quick trip in my TARDIS, because you might be interested to know that Gunkimono is a retheming of a game called Heartland. That’s to say, it’s a game with the same rules, but a different premise. Back in Ancient Times, Heartland was a game of laying tiles that represented fields of crops, then locking those down with barns. Is it more exciting, or does it work that much better, as a game that now has an entirely different premise?

I can’t say that’s the case. Gunkimono is ostensibly about war but it hasn’t inherited any mechanics that really represent battle or tactics or conflict, so I’m not quite sure why this change was made. Are samurai particularly trendy right now? Is Feudal Japan Fashionable Japan? 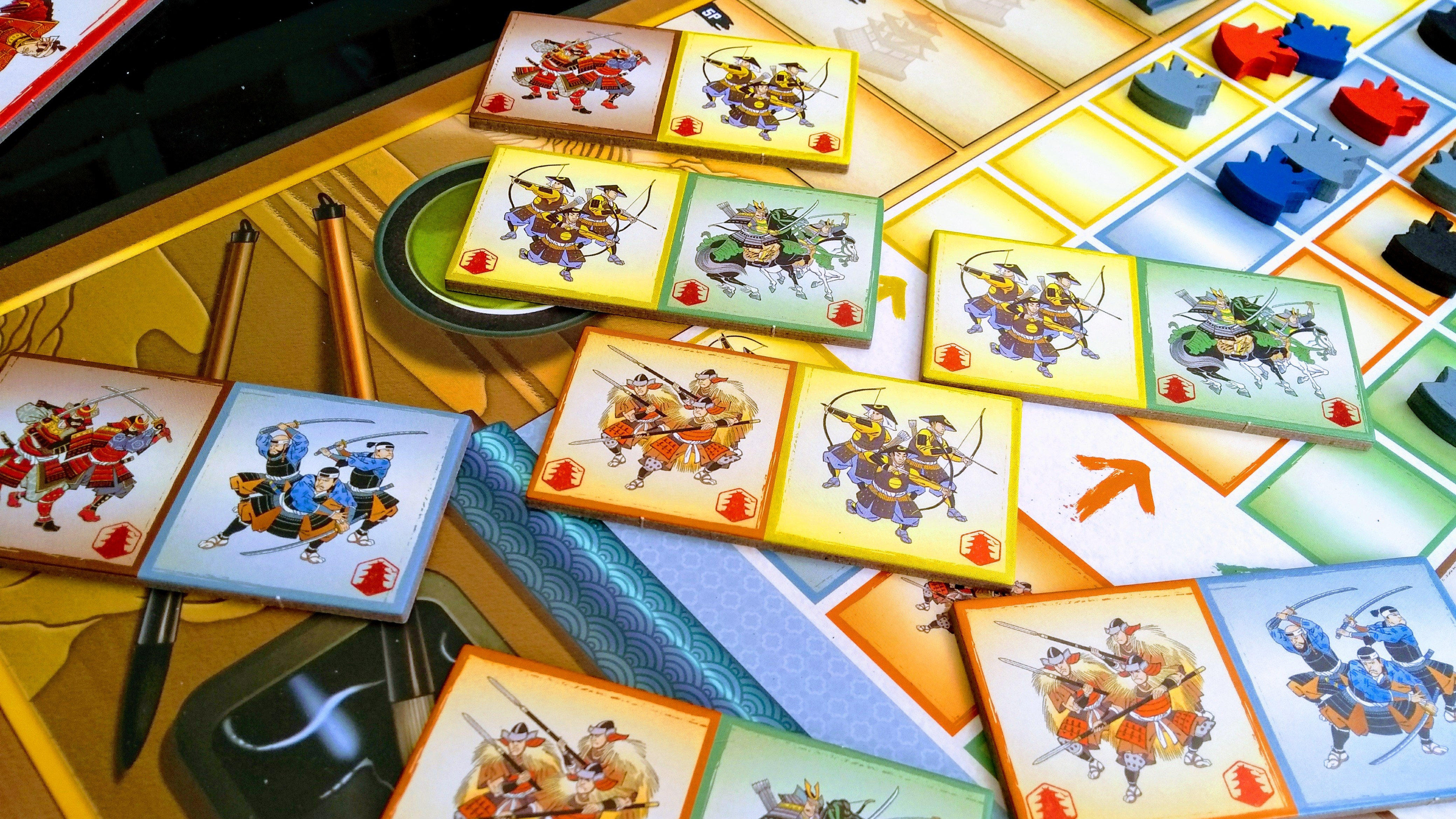 Y’know, It doesn’t really matter. Gunkimono is still good, and a fine example of one of those fundamentally very simple titles that balance accessibility with a fair dose of cutthroat cunning. Each game builds to a climax, with players boxing in one another’s fortifications as they scratch desperately for the last points they can snatch from an overcrowded board, using the few remaining tiles they can barely even play.

It may never promise the dizzy heights or devious depths that a more detailed game can offer, but it is an enjoyable, abstract puzzle that is constantly sabotaged by every player, allowing each of you a chance to be canny, clever and cruel, while never becoming too complex or convoluted. It may never claim pride of place on my shelf, either, but it will be hitting the table again, especially whenever anyone suggests that simple games are gentle games. 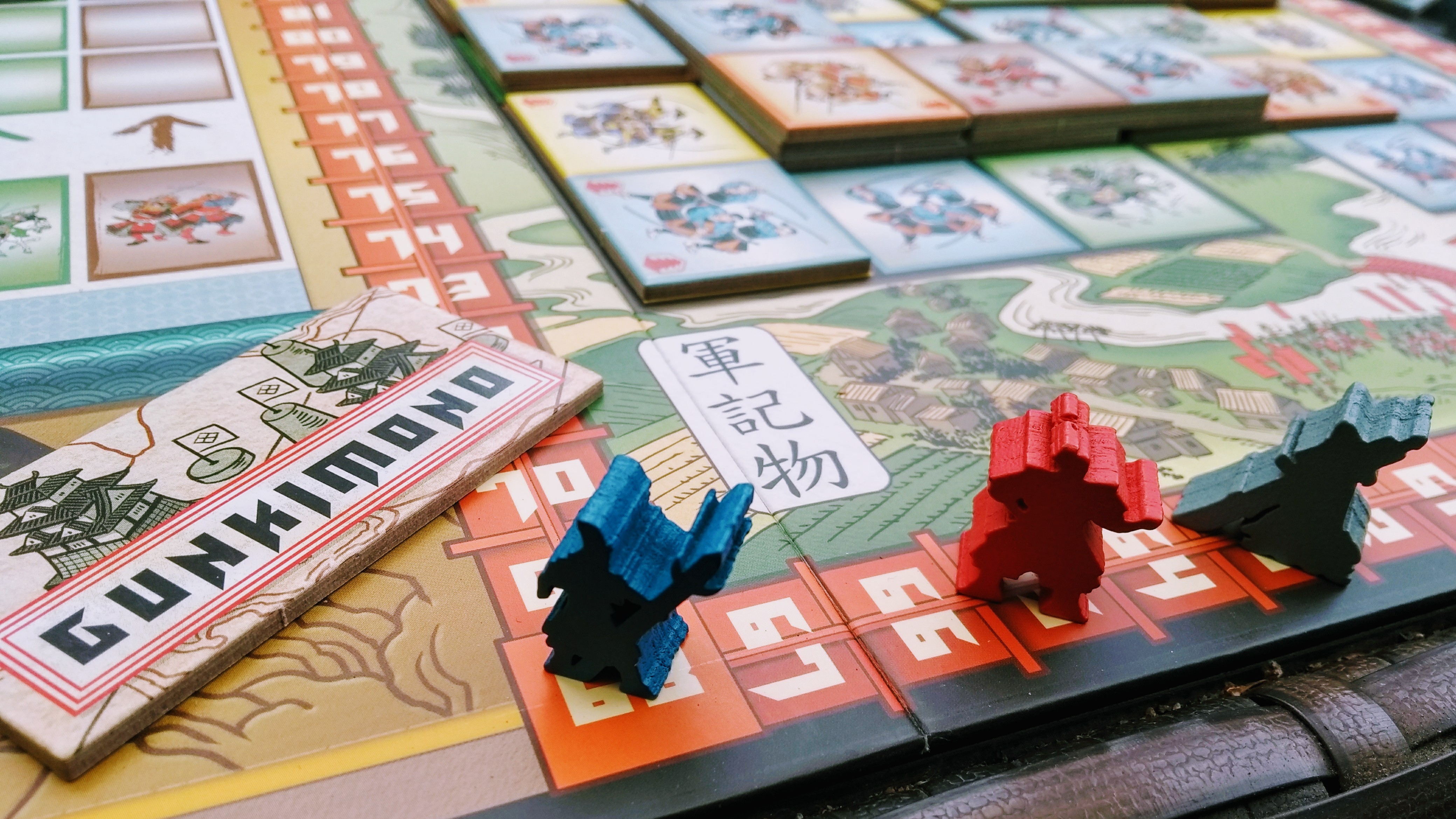 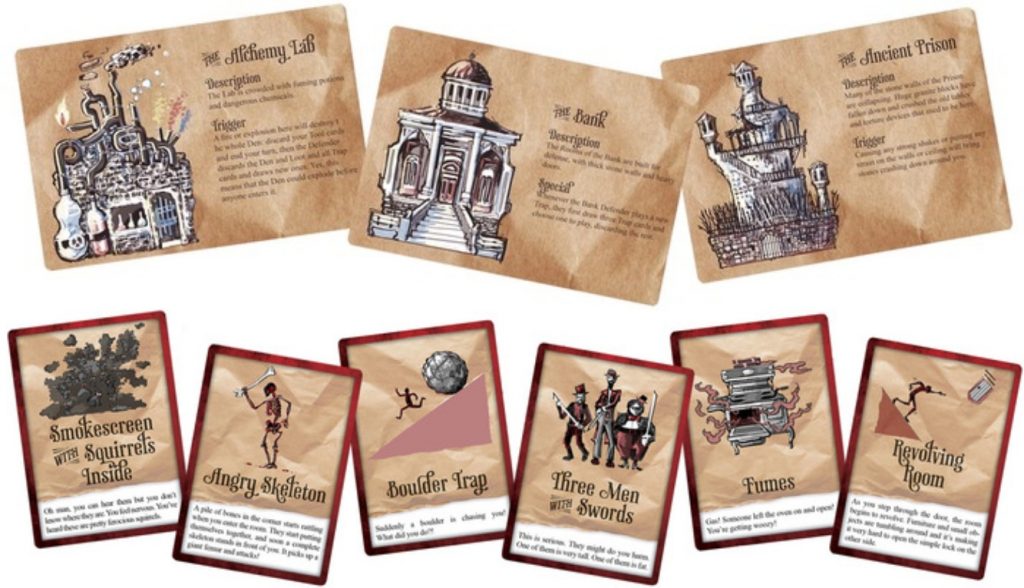