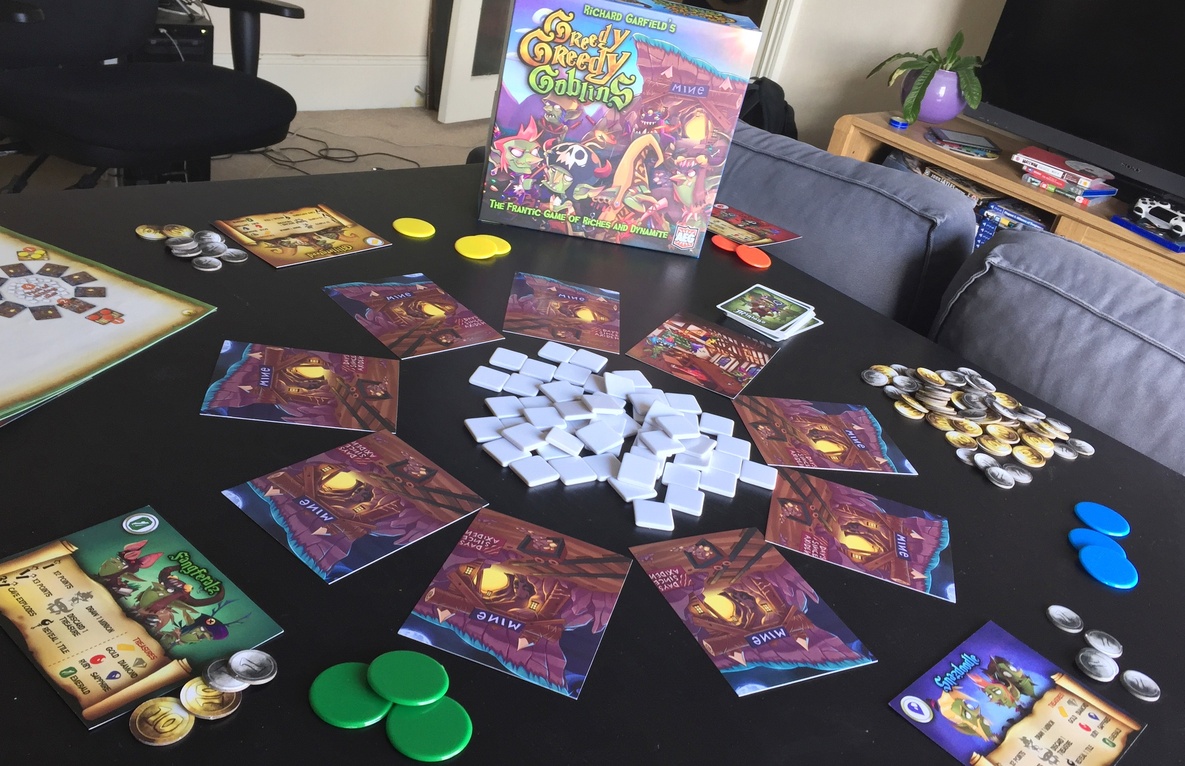 Quinns: For this review, I want you to imagine blackjack in a blender.

Picture a table of spilled drinks and creased tuxedos. Picture a group of players all trying to go as high as possible without going bust, but there’s eight different hands going on at once, anyone can claim any hand as “theirs”, and you’re all the dealer, there are no turns and you can play as fast as you like. Oh, and none of you can see anything. Except when you can.

Does that sound like fun? Of course it does. Let’s talk about Richard Garfield’s new game, Greedy Greedy Goblins.

(Yes, the same Richard Garfield that designed Magic: The Gathering, Netrunner, Robo Rally and King of Tokyo. That Richard Garfield. Exactly two designers have names that bang my heart like a gong, but he’s one of them. The other is Vlaada Chvátil.)

Here’s how Greedy Greedy Goblins works: 2-4 players all want to be the first to reach 100 gold coins. Between these players are a circle of mineshafts. Between the shafts is a giant pile of tiles. Running your hand across these tiles makes a sound like a wave pouring over a pebble beach, but don’t start daydreaming! Daydreams are for winners.

When a round begins, it’s played in real time. Using just one hand, all players may reach into the tiles, grab one, look at it (Galaxy Trucker style), and place it face-down on any mine they choose. 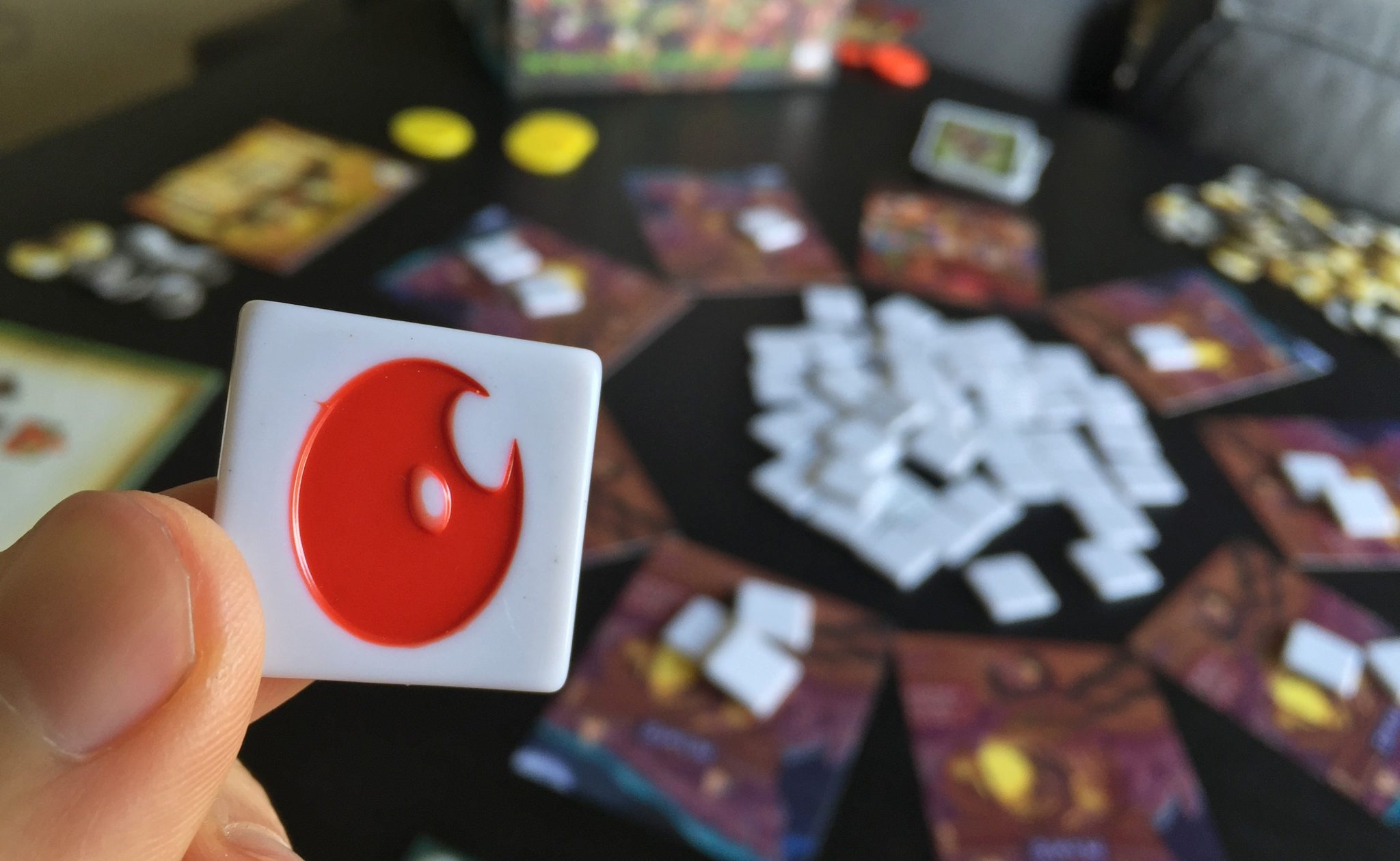 Let’s say you snatch up a gem. Gems are ace! You place it facedown in the mine nearest you. Next, you draw a dynamite tile. Dynamite’s excellent! It multiplies the value of the gems in a mine. You put it in the same mine. You draw another gem, and pop it – yes – into the same mine.

…Whereupon one of your opponents sees what you’re doing and places one of their 3 fat plastic discs on this mine, claiming it as theirs and preventing anyone from placing more tiles into it. You’ve been robbed! But there’s no time to be annoyed, because there are still 8 more mines up for grabs and your friends are pouring tiles into them right now! There’s maybe time for a wet “Spprbt!” or a piercing “No!”, but then it’s time for you to get back to work.

This is the game. A mad, absurd scramble to put good things into mines, and then claim mines you think contain good things the instant before someone else claims them. Which is easier than you think, because when you’ve built up a good mine there’s always the desire to put just one more tile into it before you claim it, giving your friends ample opportunity to slip one of their discs over your mineshaft like a manhole cover. 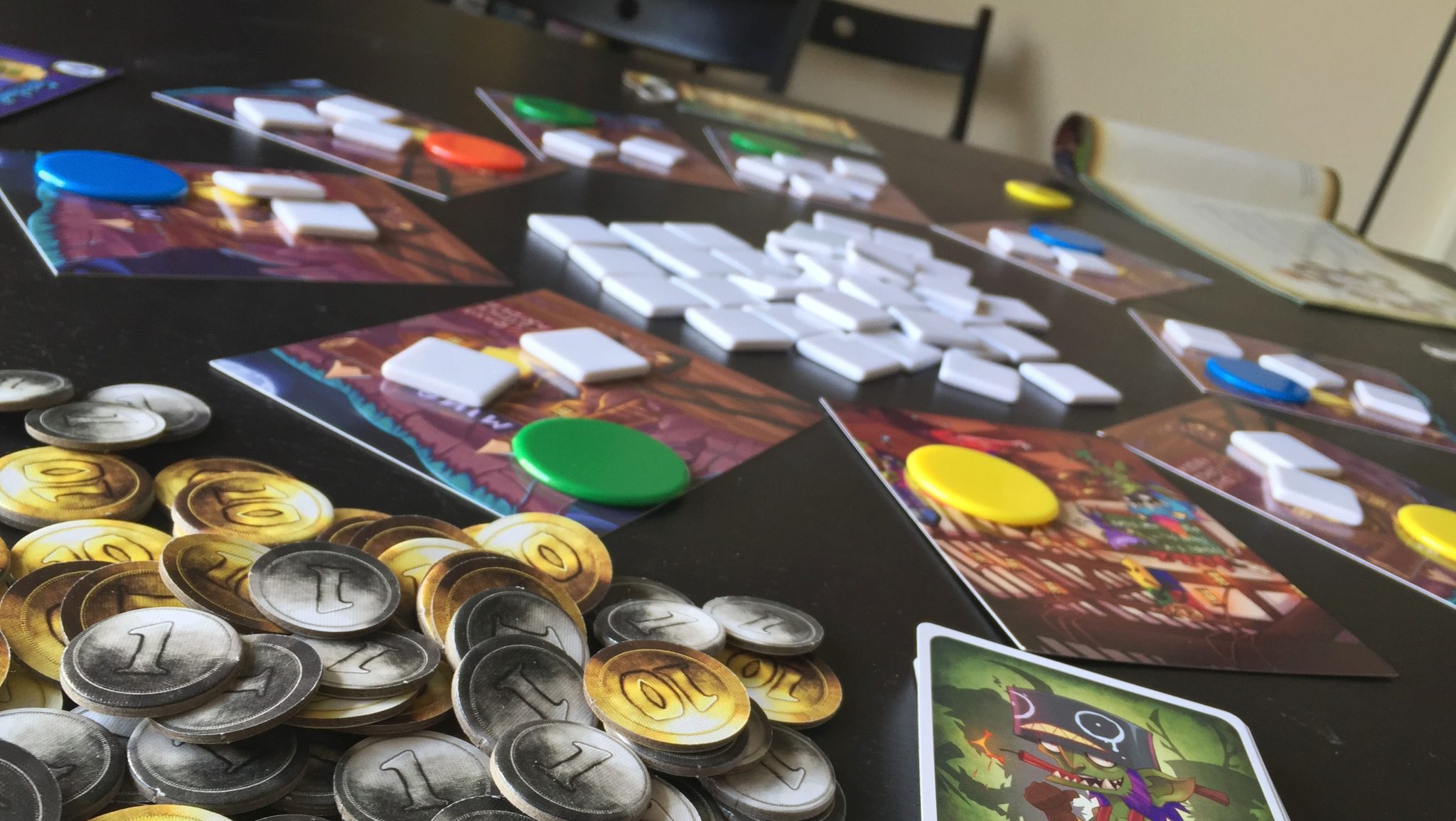 Now would be a good time to tell you the most important rule of Greedy Greedy Goblins. Y’see, a single stick of dynamite doubles the value of a mine. Two sticks will triple it! But three or more sticks? That means the mine blows up and instead of gaining anything, the player who claimed it loses 5 coins.

Yes, yes, yes. The greedy greedy game is afoot! Players all simultaneously take on the role of squirrels trying to hide their nuts from everybody else, but sometimes the nuts explode, you also need to guess where your friends are hiding their nuts, how many nuts is too many nuts to risk going into a nut hole, and… hang on, where did you put your exploding nuts again? 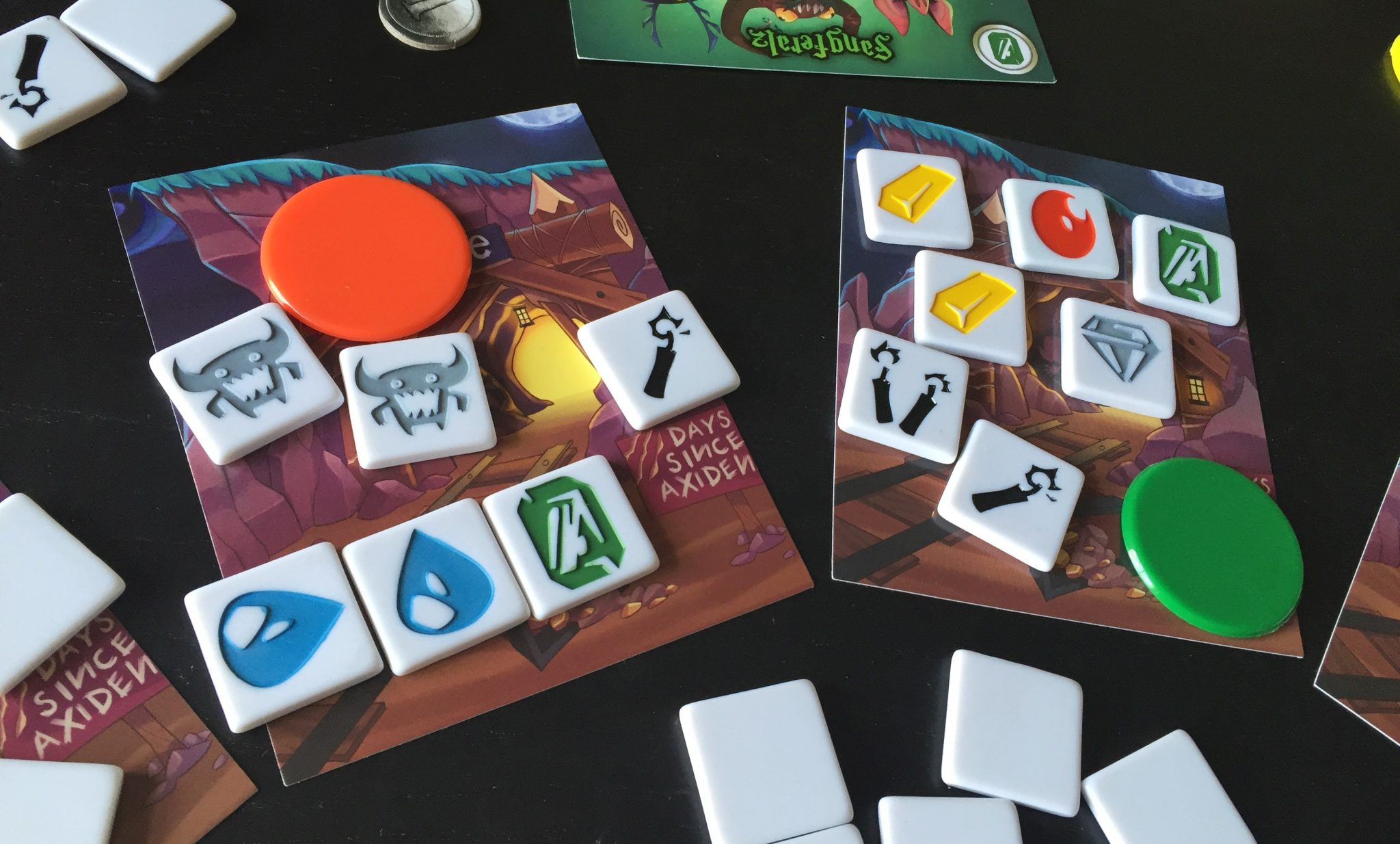 Finally, at the end of each round players take turns opening up their mines and finding out what on earth is actually inside them, which is lots of fun for the same reason as games of risk & reward often are. Either you’ll get nothing or you’ll get punished, which is fun for the table because you personally bet on that mine, you chump, or you’ll get a small handful of coins which has their opponents breathing a sigh of relief, or the game’s maths will explode and some grim combination of jewels, cards and dynamite will see you raking in 25 coins from a single cave, at which point the table groans and laughs at your rakish escape from mortal danger.

There’s other features too, like each colour of gem being worth extra to a specific clan, or monster tiles that eat gems, or even torch tiles that let you flip another tile face-up. Did your friend just put a third stick of dynamite in your loaded mine, or… (wait, which bloody tile was it they put in? etc.) There’s also a Guild location you can claim with one of your discs instead of claiming a mineshaft that’ll give you a card from the deck. These cards are fun too, as while all of them let you tweak the contents of a mine while you’re scoring it, it’s never obvious when to cash them in. Yes, you could play your Sapphire Cutter now for an extra 4 coins, but what if you find a mine that’s absolutely dripping with sapphires later? 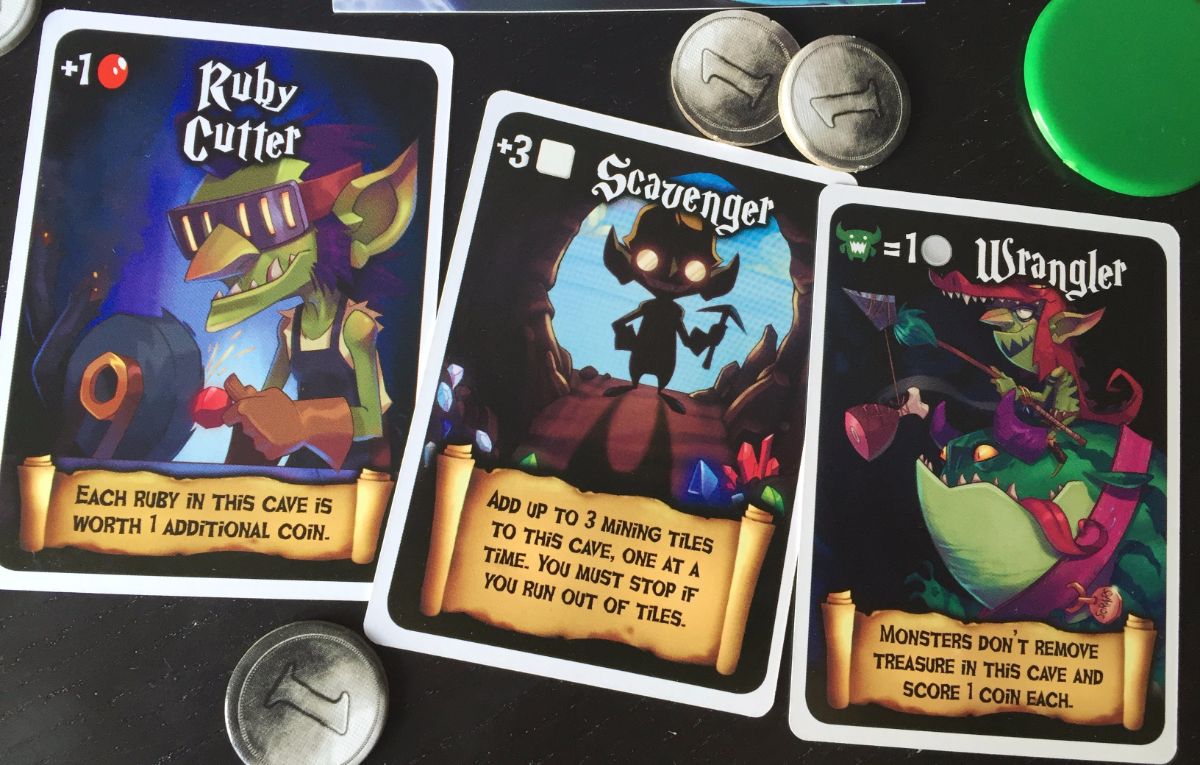 All of this extra stuff is welcome, but it’s decorative fluff compared to the central game of timing and traps, nefariousness and nitroglycerin. What I love about Greedy Greedy Goblins compared to other real-time games like Ladies and Gentlemen or Going, Going, GONE! is that, ridiculously, you don’t have to play it fast. I know I touted that as one of the best features of Going, Going, GONE!, but this time what I mean is that youpersonally can sit back on any particular round and let your friends do the work. You don’t need to flip anything. If you think you can read your friends, you can sit back, relax, let your friends flip the tiles, and casually claim mines as if you were plucking golden grapes from a tree just as they turn ripe. And until your friends realise you’re doing this and start laying horrible traps for you, that’s not just a fine tactic. It’s a winning tactic.

Something else that’s fun is that the metagame evolves so, so quickly. Your first game might be 75% anxious commotion, 25% goblin guile, but very quickly after that players are going to start changing up their plan. Rather than placing good stuff into mines near them, they’ll start putting it into mines close to you. They’ll go from developing two good mines at once to just one. Then maybe back to two. And this, perhaps, might be the best part of all. Leigh and I wrote in this article about how the joy of learning a game can come to mean the joy of learning a language. Greedy Greedy Goblins is that same principle, but run through a trash compactor. It’s a small and dirty language you’re learning, but fun all the same. 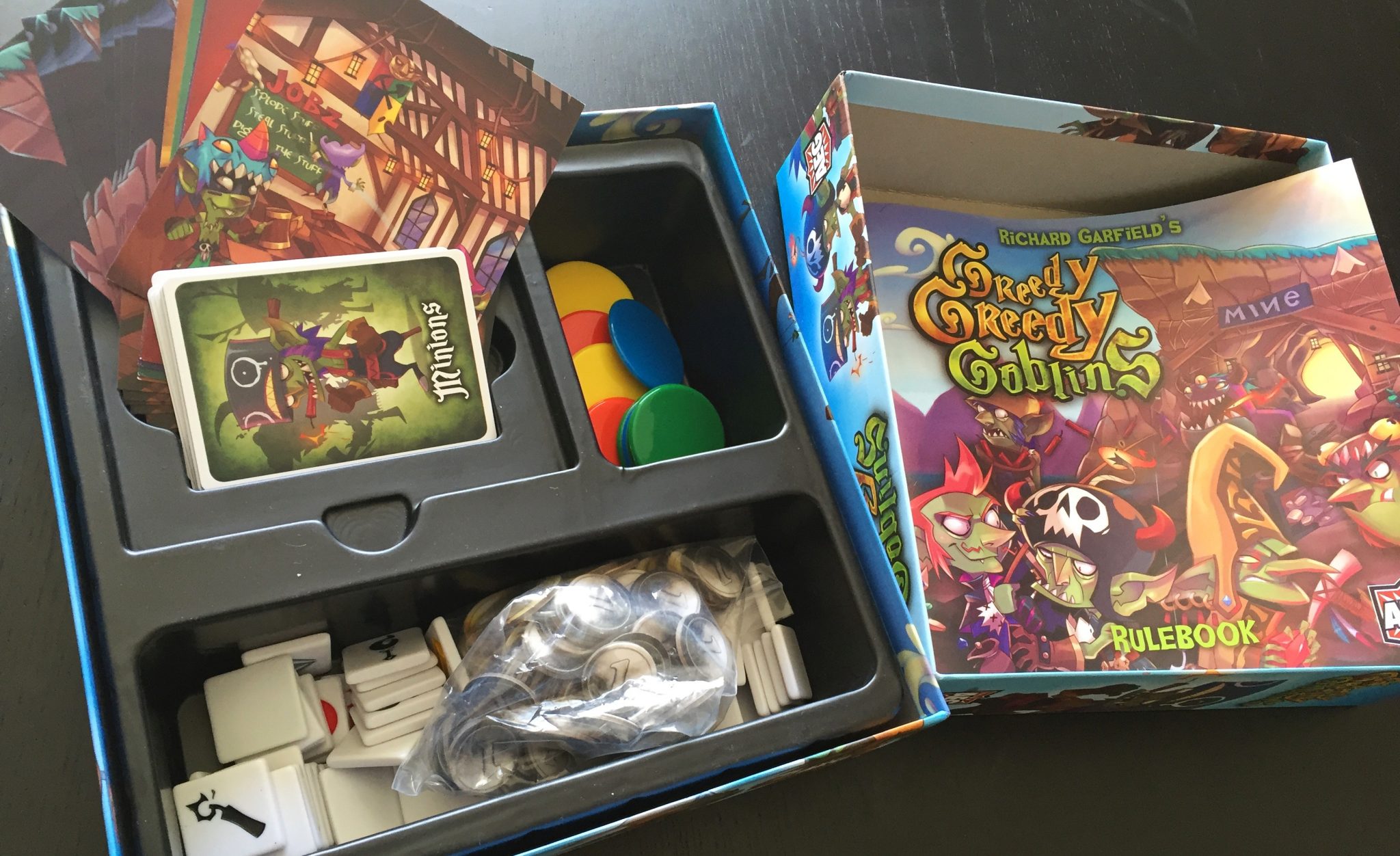 In other words, I really liked Greedy Greedy Goblins. Like a canary in a coal mine, it’s simple, pretty, and my biggest criticism is that it occupies a slightly weird place – it’s so deep and the box is so expensive that you’ll want to play it more than once, but it’s so exhausting you’re most likely to end up using it as a quick game to begin or close your board game night, which made me feel like I was never quite getting my money’s worth from it.

For that reason it won’t be receiving the prestigious Shut Up & Sit Down Recommends badge. If this sounds like something your game group would love and you were to go out and buy it, I can’t imagine you regretting it. But that’s different from what the badge means, which is games you should actively seek out. And with our board game collections getting more and more cramped for space, this one doesn’t quite make the cut.

But goodness me. Play it if you get the chance! 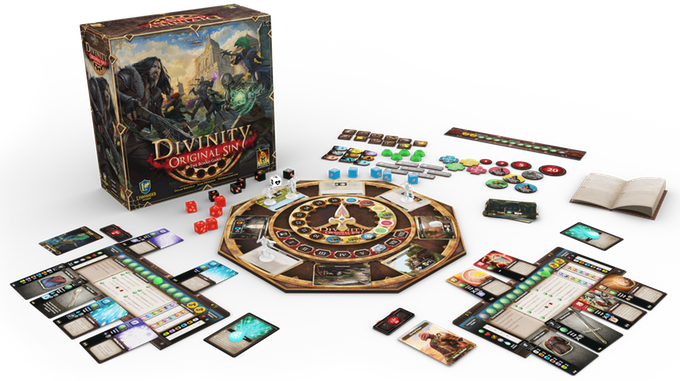 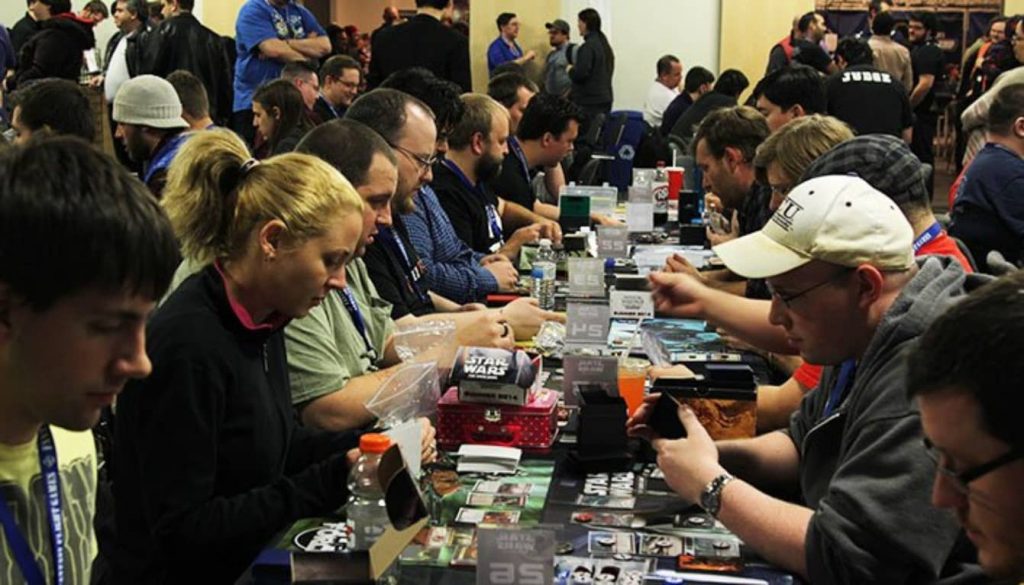