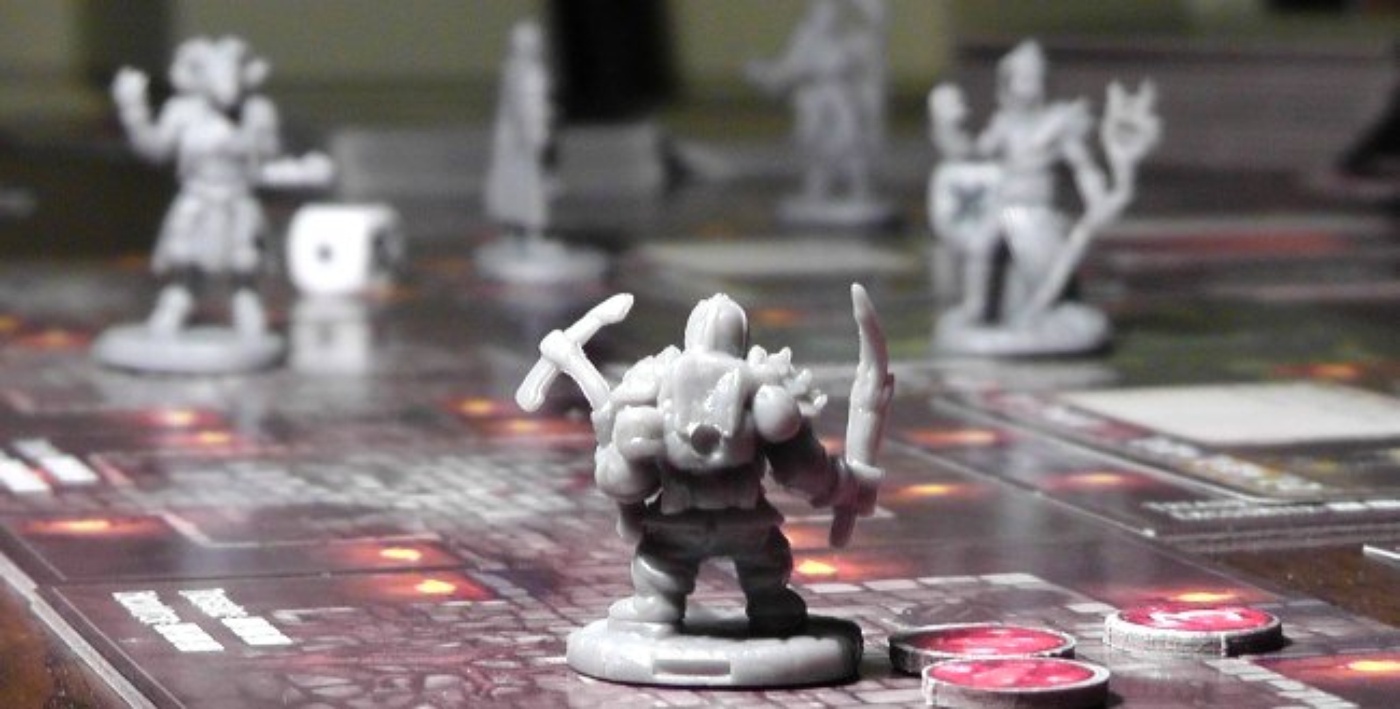 Quinns:The idea behind Dungeon Run is as sharp and alluring as a crescent moon. Up to six players control heroes running (of course!) through a monster-packed dungeon (yep!) on a breakneck quest to locate a huge dungeon boss, break its neck and snatch the all-powerful relic known as the Summoning Stone from its still-twitching claws.

…which is where the action takes off, because Dungeon Run isn’t actually a cooperative game. Only one hero can leave with the stone, you see. This isn’t some gameshow where everyone goes home with a pat on the ass and a consolation prize.

So what follows is a cruel, Cheeto-fueled re-dreaming of American football where everyone’s goal is to grab that stone, which will then give them full control of all the monsters in the dungeon, and escape through a last line of defense made of their former friends. Or, as the Dungeon Run box proclaims it, “YOU are the end boss!” A sentence so exquisite that if you repeat it to yourself over and over in a dark room you get an actual contact high off the game’s designer.

That’s Dungeon Run’s concept, anyway. The reality is… well, look, nobody said designing a board game was easy.

Dungeon Run is a lightweight game. You could set it up, explain it to your friends or house plants or even parents and finish a game in under 60 minutes. Now, the best lightweight games – Seven Wonders, Condottiere or Dixit, say – have rules as economical as the muscles on a lightweight boxer. Rules so deceptively simple that it’s only when you start playing and getting hit in the face, guts and ribs with fun that you realise the intelligence of the design.

Dungeon Run, by comparison, has rules which are flabby in places and emaciated in others. You just want to take it home and give it a healthy meal, which in our gaming group was represented by everyone breaking out into discussions as to how to fix it the second we finished our first game.

One problem with it becomes evident in its opening minutes. There’s little incentive to work together as the manual seems to expect of you. Experience points for overcoming dangers aren’t shared, so your group immediately fans out alone with the hope of finding some small mushroom or owl to beat up in a corner.

This makes for a lonely, lopsided experience where a few players are bound to be tortured at the hands of random chance and end up knocked unconscious by something hideously fast and angry. For all of Dungeon Run’s generosity in its quantity of treasures, heroes and special abilities (eight heroes! each with around thirteen unique abilities! shit is bananas!), the actual results in its encounters often still come down to a dice roll or two, or frank incompatibility. Your magical wizard bravely discovering that the next room over contains a magic-proof golem, for example.

But we can deal with this! We can. Same as we can forgive Betrayal at the House on the Hill for its opening third quite literally simulating a some children and an elderly man walking around an empty house, because when it does kick off it’s always surprising and entertaining. But the most demoralising part of Dungeon Run actually happens after all this buildup, when it’s revealed that the endgame is as awkward as a wrestling match where the only rule is that nobody can bend their legs. Or arms.

What you want at this point is a panicked, slightly political struggle, the mother of all scraps. What you get, because of the boss’s bizarre ability to teleport anywhere the players choose and because of every hero’s limit of moving precisely two tiles each turn (or moving one and attacking), is a sort of nervous and spasmodic squaredance. Everyone shifts around the dungeon like embarrassed chess pieces, doing their best to scrape an advantage from any powers they’ve got.

Eventually, after some amount of the brutal shankings that occur when heroes actually do cross paths, one of you will go crawling sideways out of the dungeon with the Summoning Stone, leaving most if not all of your friends as so much grimy jam on the dungeon walls. Overcoming the odds to leave with the stone does feel like a victory, just not one that’s particularly deserved.

Oof! Listen to me, moaning like a sailor with his penis trapped in some unlikely household object (a bottle?). While I wouldn’t recommend you buy Dungeon Run, at this point I’ve probably lowered your expectations enough that if you did pick it up you’d be pleasantly surprised. As well as those eight heroes you’ve got four unique bosses… 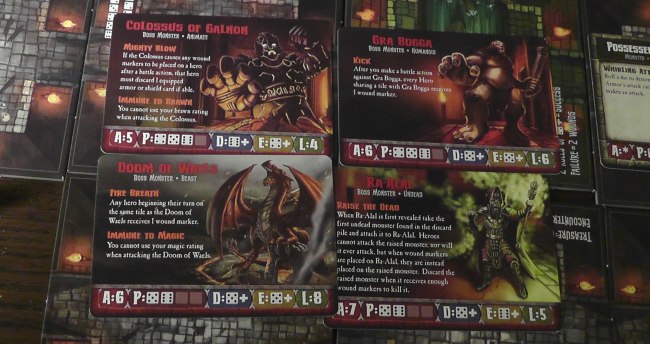 …thirty-eight dungeon encounters and twenty-six pieces of treasure, so you’ll at least be paddling in the sunny waters we call “variety” for your first few games.

What’s almost as good is that the game’s colour and brutality lends itself to some funny stories. In one game our group’s evil wizard came upon a tome of magic so powerful that after recovering the Summoning Stone he was able to turn the rest of us inside-out as easily as breathing, only to botch a strength check and get crushed by a portcullis on the way out of the dungeon. None of us left the dungeon alive. Presumably the Summoning Stone was later picked up by a wandering goat herder.

Hmm. I’ve still been a bit downbeat. Maybe Paul has something sweeter to say… ? 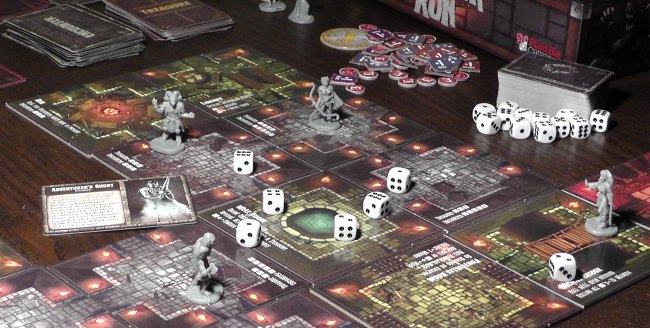 Paul: The end of this game, it’s supposed climax, is a little like how Reservoir Dogs might have gone if everyone involved wasn’t pointing guns at everyone else, but instead raisins. They’d then wave these ineffectually once or twice, whilst also posturing, before eventually… I’m not sure where I’m going with this.

What I do know is that I wanted to turn the Dungeon Run box upside down and shake it to see if some of the suspense hadn’t fallen out, or to check we weren’t missing some key component. The idea of a game where you begin by helping each other out to achieve an objective, before turning on one another to achieve total victory, is a brilliant one, but that idea must have grown wings or a set of burrowing claws because somewhere along the design process it simply escaped. Dungeon Run feels like a game made out of many intricate and finely-crafted pieces, but completely lacking the conceptual glue that holds them all together. Much as I dread to say it, this game feels broken.

I’m so sorry to end this review with a whimper instead of a bang, or a decapitation, an explosion or a colossal barrage of magic, but that’s how it goes with Dungeon Run too. The final showdown is underwhelming because all the game’s potential for co-operation, co-dependence or ultimate corruption is lost, set adrift in a sea of indifference.

Paul:Back to work on season 2? 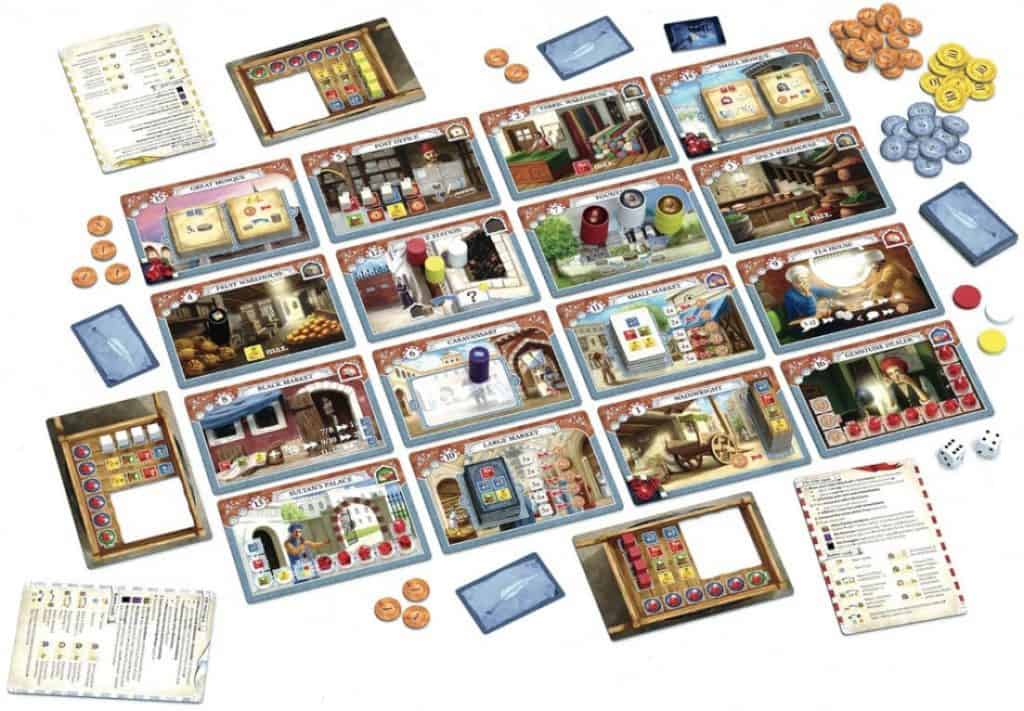 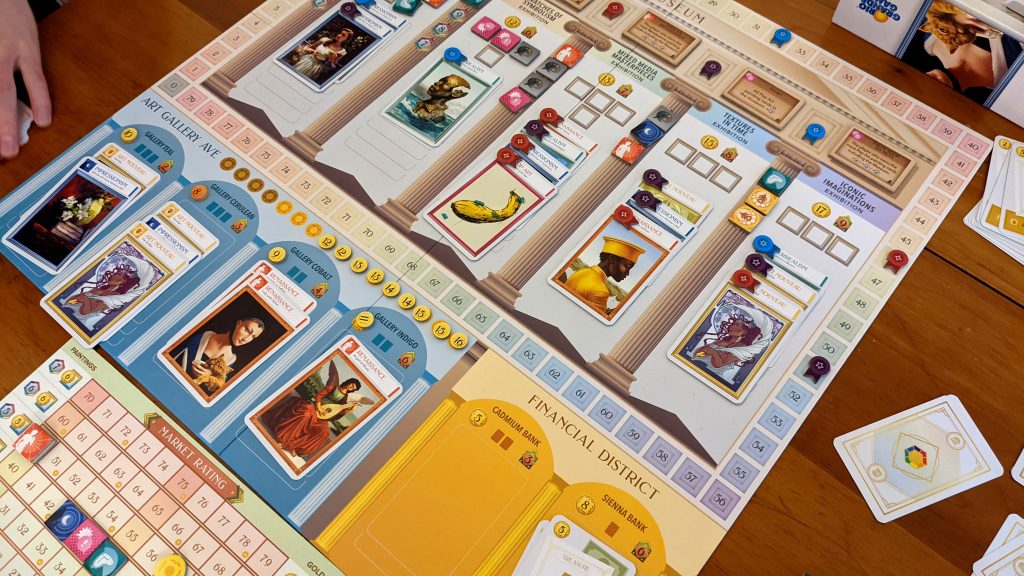