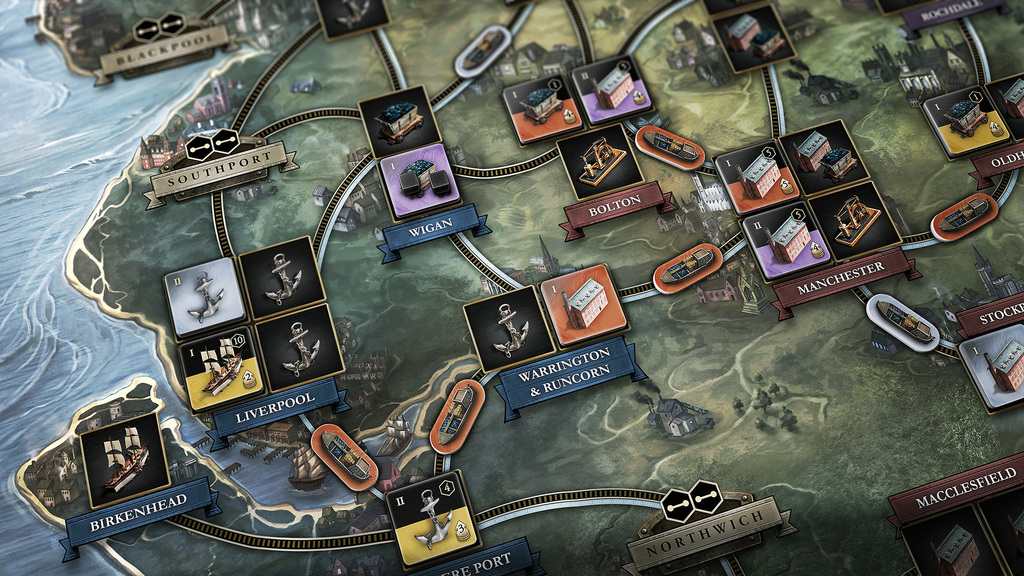 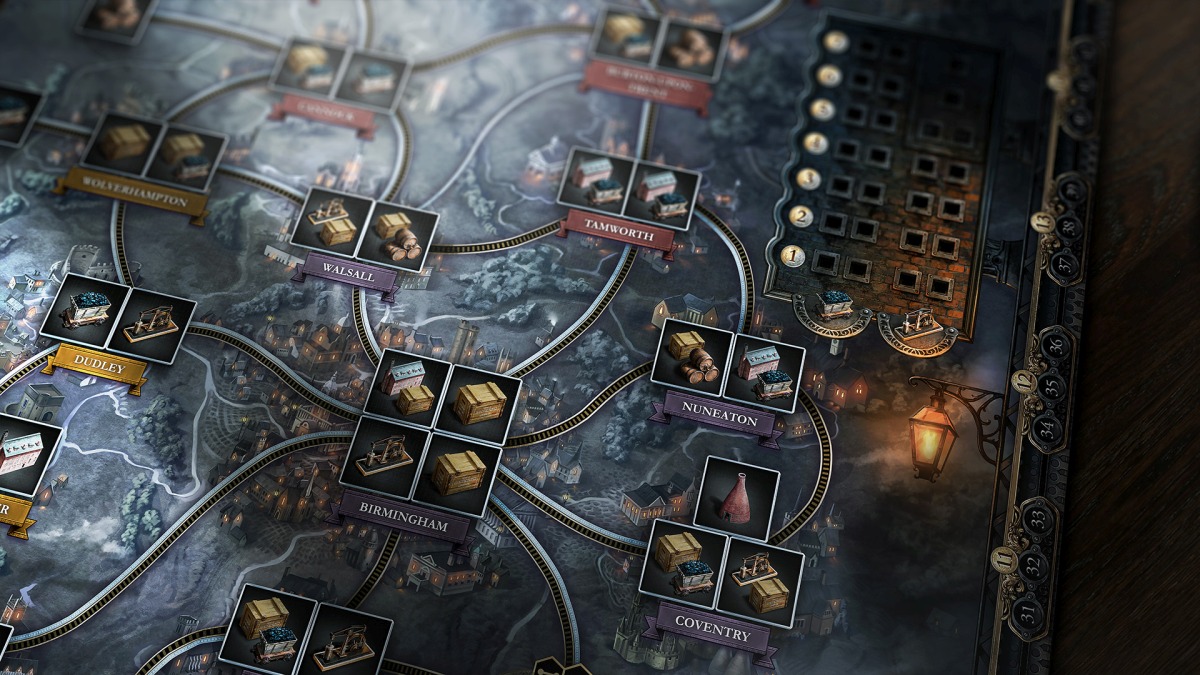 I don’t know what I love more, that the board is so pretty or that it makes Birmingham look like the Forgotten Realms.

Dyed-in-the-wool (or cotton?) fans of Brass will probably be excited by the fact that “Many of the tried and true strategies of the original are no longer as powerful as they once were, and other interesting new strategies are waiting to be discovered.”

As for passing Brassers like me, I’m curious about the fact that in Birmingham, Brass’ three resources of Coal, Iron and Cotton will be joined by Beer, making for a more complex game. But while the thought of “more” is thrilling in this context, it also makes me nervous. The original game was an absolute bear to teach. Is a more complicated experience likely to worm its way into my heart?

I’m excited to find out, in any case. I’ll probably give Brass: Lancashire a miss, but I’ll check out Brass: Birmingham when it comes out next year and let you know what I think.

Paul: As for me, I’m excited to hear that an expansion for Sheriff of Nottingham (see our review here) will soon be smuggled out to us, featuring new goods, special Laws that the Sheriff can enact, Sheriff’s deputies, Merry Men with special abilities and room for a sixth player.

It sounds like a terrific set of additions and I’m very curious as to how it will all play out. I’ve always liked this game, yet never loved it and there’s always been this lingering feeling that it needs just a little more. This could be what turns my smirks to grins.

Quinns: We’ll see! Personally, I’m more curious about a different game of betting and bluffing from the same publisher that should be arriving in shops any day now: 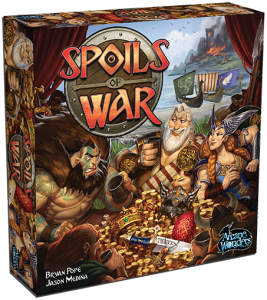 Spoils of War is a game about vikings dividing their loot, but far more importantly, it’s also a re-implementation of classic public domain game liar’s dice with a load of extra geeky bells and whistles.

Paul: Ooh. But we both love liar’s dice!

Quinns: Everyone loves liar’s dice. It’s one of the best games of all time. And that’s why I’m supremely curious about Spoils of War. Liar’s dice is as close to a perfect game as I can imagine. Will a load of extra rules and phases bog it down, or make it fly?

Quinns: Ahhhhhh you son of a twerp 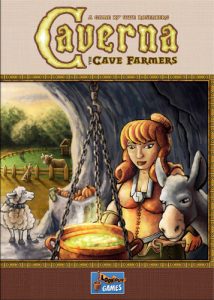 Paul: ALSO emerging into the light this week is news that an expansion for Caverna will be arriving in 2018 and… wait, both this and Merry Men are actually coming out substantially after the original games. Curious, right? Though that’s no bad thing at all and I hope it’s a sign that people are still playing and loving them just as much as when they were brand new.

ANYWAY, what really caught my eye about this expansion announcement was that it comes from Alex Wilber, a fellow who previously created a fan-made add-on that massively expanded the number of races you could play Caverna as. Taking dwarves as the standard, he added hungry hobbits, greedy kobolds, powerful trolls and so many others, some of which were outright aggressive and could attack other players. While the contents of the expansion haven’t yet been revealed, hopefully they’ll reflect some of these ideas and, I’m sure, will at least reflect how creative and proactive he’s been. Here’s to fan expansions everywhere! 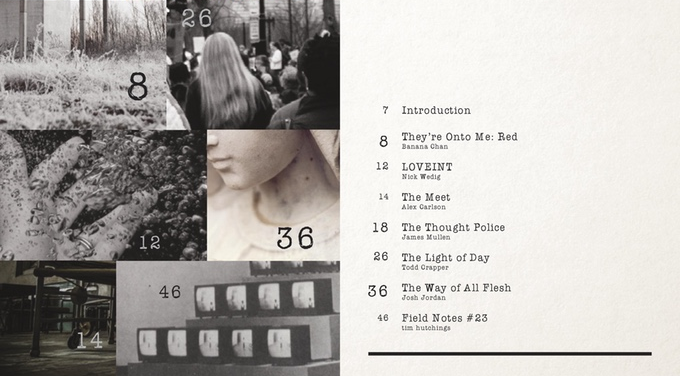 I tell you what I like in my Kickstarter pitches and that’s a little bit of style! The Imposters is a collection of seven quite different RPGs, mixing tabletop, freeform and even a solo LARP, all of them based around conspiracies and cover-ups. And yes, you read that last one right. A solo LARP!

Spotted last week by our RPG correspondent, Cynthia, this Kickstarter interests me not only with its games, but with a pitch video that just has the right kind of feel. Please, please stop making pitch videos that are just you stood in front of a wall, telling people what your name is and how many rounds of play there are in your game. Please. Please.

Quinns: Backed! I literally back games like these just to read them and luxuriate in all of the ideas within, just as if I was sinking into a bubble bath. Being able to then actually play them from time to time is a delicious bonus. 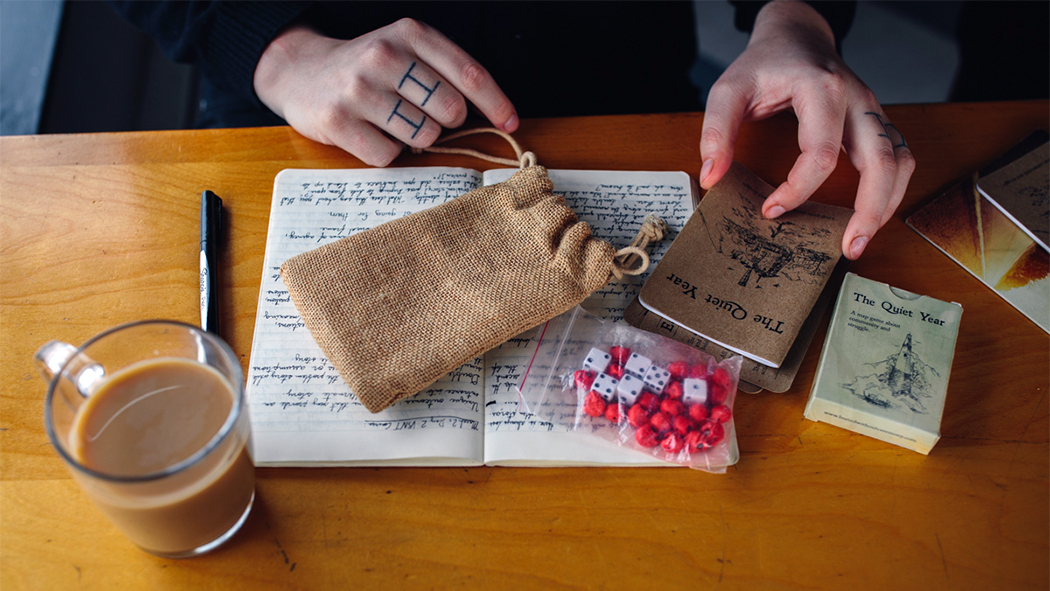 In other news of stuff that interests me, thhis week I was delighted to check out this beautiful interview with game designer Avery Alder, the sparkling wit behind Monsterhearts and The Quiet Year. But those are just the games we reviewed, of course- her larger catalogue is well worth checking out.

Paul: This is interesting and so relevant to roleplaying because a lot of Alder’s ideas are about very fundamental elements of social dynamics. Weirdly, we still don’t even begin to model many of these in our games, instead getting caught up on what we need to roll to hit an orc or how fast a dragon goes. These things are cool, but they aren’t everything and they’re certainly not the only source of engagement and excitement in a game. 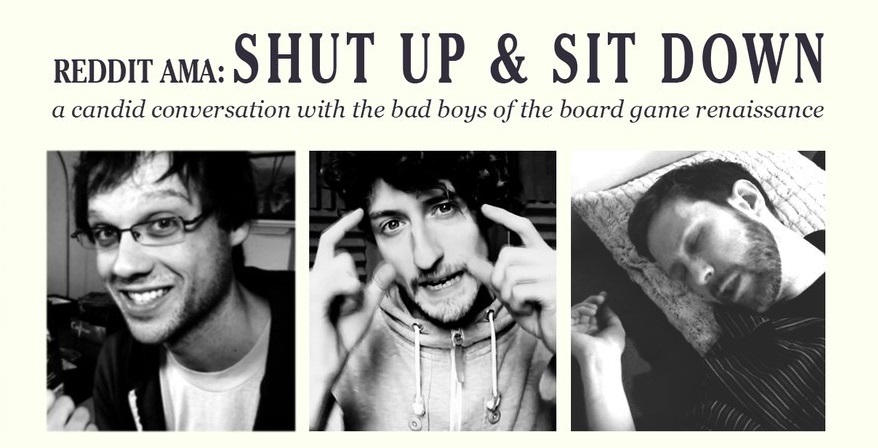 If you missed our reddit Ask Me Anything last week (like, no kidding, I myself did because I didn’t write the damn date down), SU&SD commenter Shirley Naught has handily converted it into a magazine-style Q&A, which you can peruse here.

Quinns and Matt gave some excellent and very detailed answers, which I think give a lot of insight into things people don’t always get to hear about. What fine interview subjects, no? If you’re out there and you’d like to feature us on your shows, Ellen/Conan/Graham Norton, please do get in touch. We know you’re watching but, at the same time, so terribly intimidated by our incredible presence.

Quinns: Thanks to SU&SD reader Twispby for pointing out a pretty big news story that we missed… 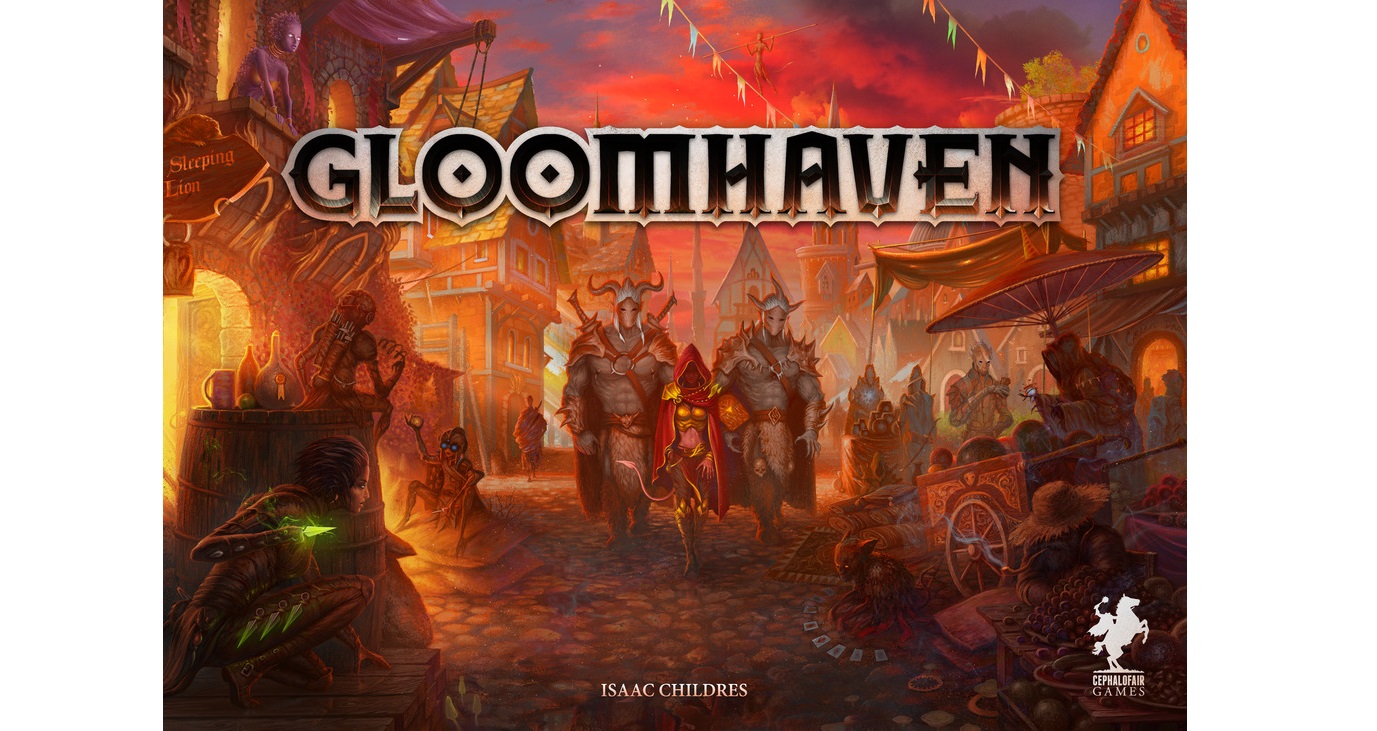 OK! See that? That’s the cover of Gloomhaven, a co-operative dungeon crawl game that raised $386k on Kickstarter in 2015. Right now it’s back on Kickstarter, and it’s already raised more than $2 million from more than 20,000 backers.

That’s because Gloomhaven has developed quite a lot of hype. In fact, at the time of writing it’s rated as Board Game Geek’s 7th best board game in existence. I’ve done quite a lot of investigation as to why, and it’s not that Gloomhaven is such a spectacular game – even the big fans admit that – it’s more that there’s a truly indecent amount of it.

There aren’t just a wealth of ideas in the box, there are years of lovingly-crafted adventures. As well as simply levelling up your characters, you retire them and unlock new ones (there are seventeen different classes of hero to play). As well as exploring a world map, you cover it in stickers. Excellent reviewers No Pun Included called this game literally unprecedented in scale. It’s functionally a combat-heavy D&D campaign but without the Dungeon Master or the roleplaying.

Now, with the launching of this second Kickstarter two weeks ago, the editorial staff of Shut Up & Sit Down had an option. We could have borrowed a copy of Gloomhaven and squeaked a review into our timetable before this second Kickstarter ended, just like we did with our Kingdom Death review. But ultimately, we decided not to, for reasons I’ll probably go into in the next donor newsletter.

Still, what a thing, eh? Our congratulations to the Gloomhaven team for their labour of love! 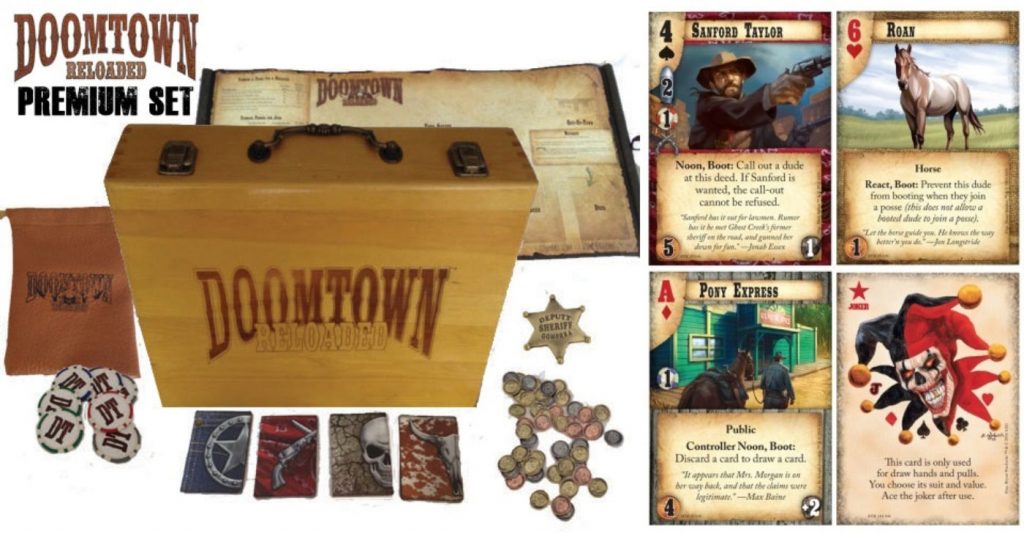 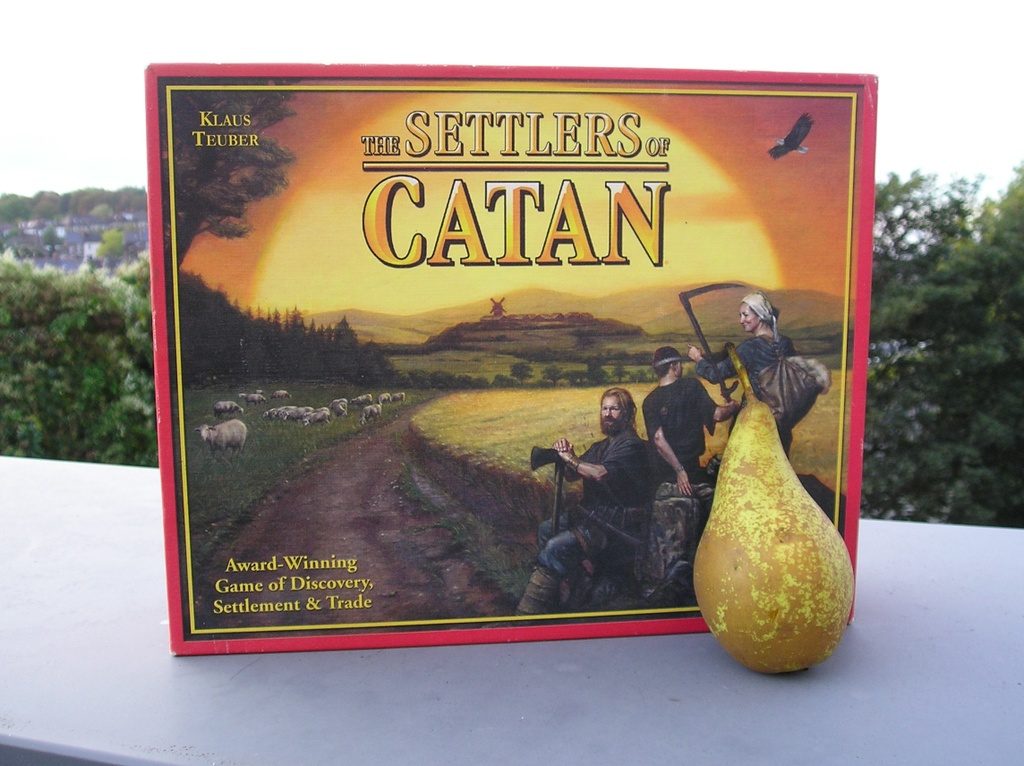