(A whale would be good at the long jump, of course it would, give me your dang vote) 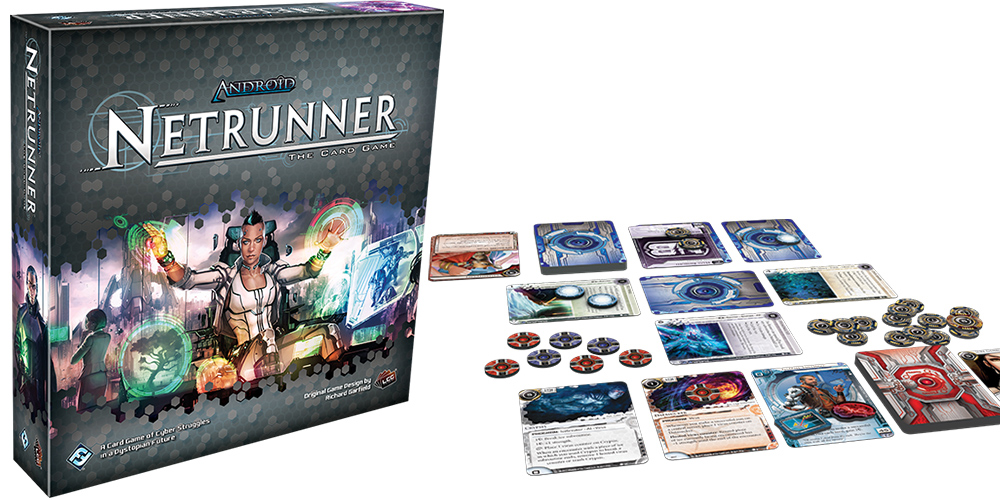 Paul: Last week (and not long after the ink was dry on our previous Games News), Fantasy Flight announced the Revised Core Set for Netrunner, signalling some substantial shifts in the game that will significantly impact the tournament scene. First of all, don’t panic if you’re already heavily invested! This doesn’t mean you have to re-buy any cards or that your old sets are now useless, but it does mean that some cards from the previous version of the game are being laid to rest…

Quinns: And I welcome that! A lot of people had been saying that a card rotation was long overdue and with this revision, Fantasy Flight are kicking a lot cards that define Netrunner out of organised play. You can still use these in your own time, but they won’t be tournament legal any more. Oh! And FFG also just announced that the new cycle of expansions will be set in Sub-Saharan Africa, continuing the game’s commitment to diversity.

Overall, if you’ve been looking for an excuse to get involved in the best collectable card game in the world, or just an excuse to say the word “Cyber” a lot, the Revised Core Set is that excuse. 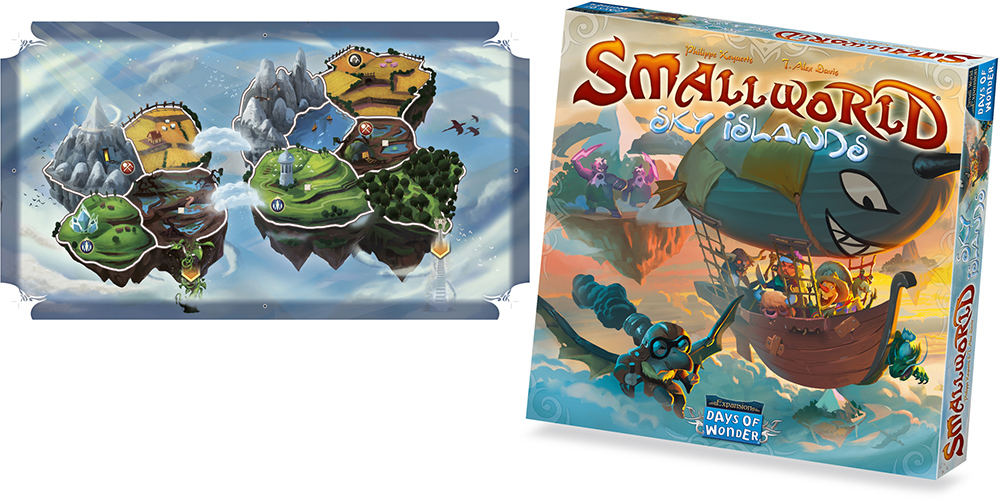 Paul: I’ve never claimed to be the biggest fan of Smallworld but, undeniably, so many other people are and it would be remiss of me not to mention the new expansion that’s on its way. It’s been SIX WHOLE YEARS since the previous Underground had players burrowing through the soil, but now Days of Wonder want to launch them into the clouds with Sky Islands.

As well as a new sky board, which you can (ngggh) climb up to by beanstalk, Sky Islands adds the expected extra races and special powers, as well as making room for an extra person at the table. SIX WHOLE YEARS, though. I can’t get over that gap. Six years! That’s when we started Shut Up & Sit Down! You were living out of a van and I hadn’t grown arms yet.

Quinns: I love it when publishers drop expansions for old games. In my head it’s like an artistic statement rather than a viable commercial product.

You know what else was happening six years ago? We were playing Kingsburg. I know you remember it, Paul! I recognise that glint in your eye. That’s the glint of a man who has just built a Wizard’s Guild. I remember that you liked that game a lot back then, so I’m not sure if I should tell you that… 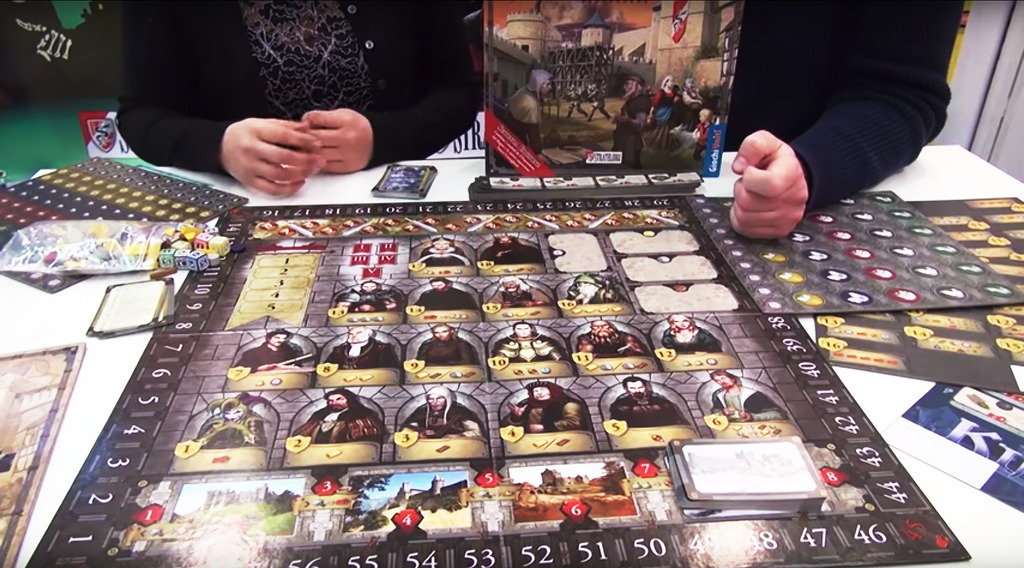 Like many revisions, it integrates all six of its expansions into the base game, like a tailor stitching pockets onto a suit, but somehow that suit has got… kind of grey and drab. I feel like making the new edition of your game look nicer is a no-brainer, but then again, I don’t envy Italian publisher Giochi Uniti having to compete against Fantasy Flight’s battalion of talented artists.

Paul: Boy, I would love to play Kingsburg again, but will I feel the same after so long? It’s hard to say.

Also pulling me back to the past this week is the enormous Warhammer RPG Humble Bundle. Never in the history of inhuman conflict have so many skaven been available for so few charity dollars. For ONE OLD WORLD DOLLAR you get a PDF of the second edition rulebook, plus three supplements. There’s loads more available if you pay more and for just twenty bucks you get TWENTY SIX DIFFERENT WARHAMMER BOOKS, including the first edition.

And I actually prefer that first edition, you know, even if the rulebook needs to be rearranged and could do with some clarifications. I have so many good memories of the spin that the Warhammer world puts on fantasy, making it frequently so flawed and thoroughly unpleasant. There’s so much narrative potential there, even if the world lacks many distinctive, memorable personalities. 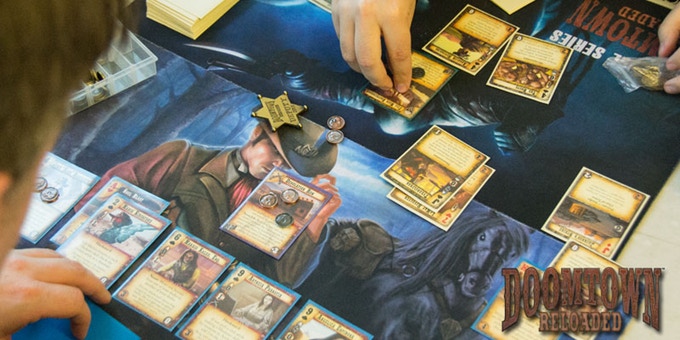 Quinns: Speaking of excellent spins on established genres, we also loved the weird west of Deadlands and its excellent card game cousin, Doomtown: Reloaded, so it’s never going to be bad news to hear that the latter has an expansion up on Kickstarter. And it’s enormous.

It adds nearly a hundred new cards to the game, as well as (far less exciting or essential) expected add-ons, like a trunk and dividers, BUT ALSO you can get an expansion for the Deadlands roleplaying game at higher tiers. 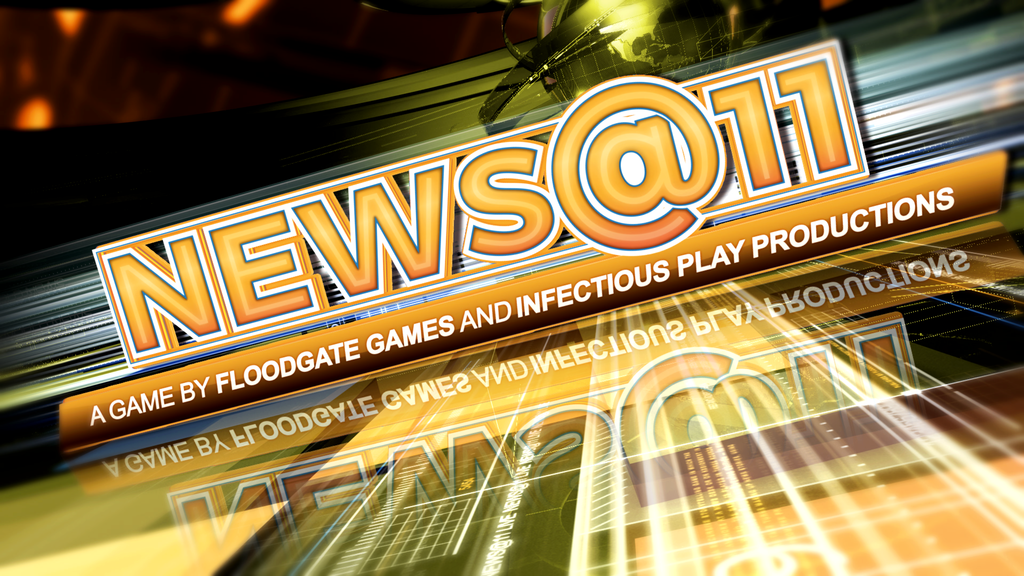 Paul: Those Doomtown Doomfolks have flown way past their funding goal, however, so I want to swing the Kickstarter periscope to point towards the improvisational storytelling game [email protected].

Everyone probably knows by now that we have such a taste for party games that put players on the spot, forcing them to improvise and take on roles, and what I particularly like about [email protected] isn’t just that you have to do your best to pretend to be a professional newscaster, talking about whatever nonsense everyone else hands to you, but that these stories develop as the game progresses. How does the story of a sandwich caught up a tree change between breakfast and afternoon news? There’s wonderful potential here for all sorts of silly callbacks.

Quinns: Ah, but you’ve left out the best bit! If you have someone around the table who hates improvising, they don’t have to. Instead, that player can be the “Director”, throwing cards around the table like “Interview segment,” “Breaking news” and “Wrap it up”, essentially delivering structural punchlines to everyone else (or just making their friends squirm under pressure).

I’ve played prototypes of [email protected] twice and had a blast both times. If anyone reading this enjoys the genre of improvisational goofiness, they owe it to themselves to back this broadcast bad boy. 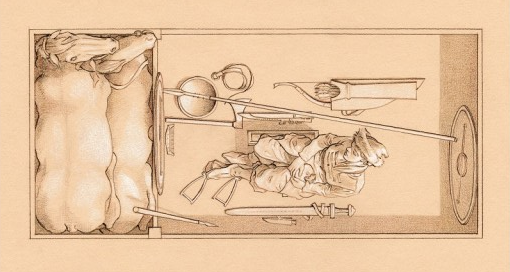 Paul: I’ve put the kettle on, since we’re almost at the end of this week’s news, but I did want us quickly peeping at just two more things. The first is a story that’s been circling quite widely, that of a Viking warrior discovered by archaeologists to have been put to rest with what must have been one of her prized possessions… a wargame.

There’s always a tantrum from reactionaries whenever historical evidence shows that Viking women fought, something that keeps happening and keeps frustrating sexists, so kudos to Tabletop Gaming for choosing the headline that they did. Now we can be even more curious about Vikings after learning that, not only did men and women fight together, but that they also loved games so much that they’d send someone to the afterlife with one.

Is there enough time for me to link to the Accidental Wes Anderson subreddit? This is wonderful imagery that “accidentally” looks like the work of cinematographer Robert Yeoman and his director friend Wes Anderson. Many of these are extremely pleasing to look at.

Quinns: There’s absolutely time for that. But we also need to make time for this: 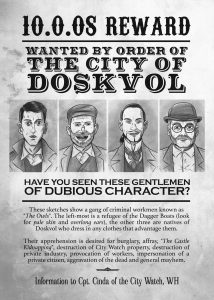 You’re looking at a Wanted poster created for the season finale of my Blades in the Dark game, which was my fun way of presenting my players with illustrations of their characters. I’m sharing this because it’s just about the coolest thing I’ve ever done as a GM, but also to give a shout out to artist (and friend of the show!) Tom Humberstone who made the dang thing. Not only did he nail the characters, he also made them recognisable as the players who made them. I can’t promise that Tom will illustrate RPG characters for just anyone, but if you’re otherwise in need of a professional illustrator, Tom is as talented as he is lovely to work with. 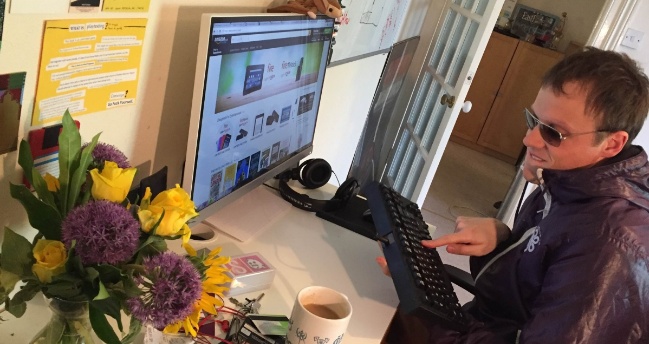