Paul: I specifically told American punk rockers Green Day to wake me up when September came* and they have done with an absolute earful of games news. We’ve got everything from castles to fish to Lara Croft this week, so let’s get this season rolling…

Wait, hang on. Warhammer… in schools? 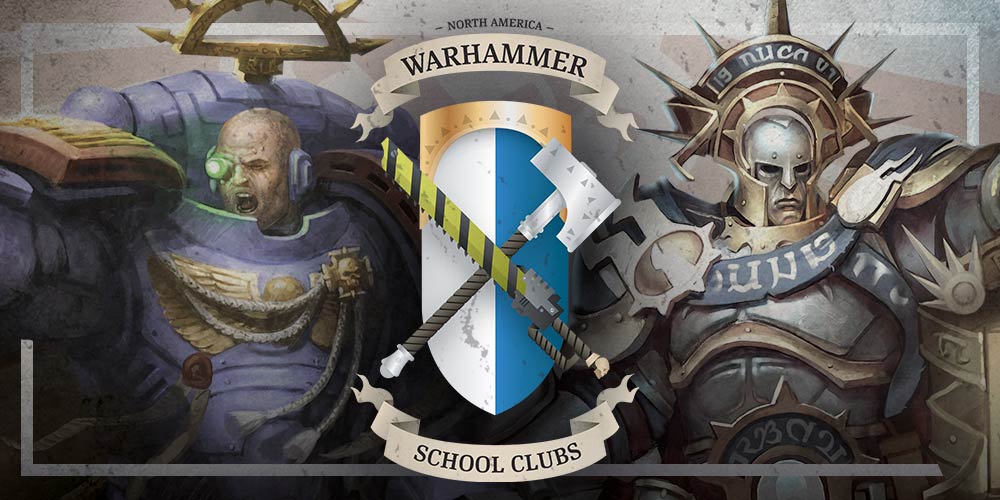 Paul: Yes, that’s right! Teachers across North America can now apply for a free package of Warhammer products that includes miniatures, paints, starter sets and rulebooks that Games Workshop say will “provide enriching and creative activities to engage in” and “give students an opportunity to develop leadership skills and decision-making skills.” It also might just happen to get a few more young people into Warhammer.

My feelings on this are immediately 50% cynical and 50% interested, as this is absolutely a way to reach more teenage fans, but getting young people into planning, reading and painting is no bad thing. Plus, we constantly underestimate teenagers and this is going to brainwash a legion of young people and create an army of Warhammer devotees, it’s going to bring a lot of new people into tabletop gaming and act as a springboard to a wider hobby. I am a tiny bit jealous, as I wish we’d had a Warhammer Club (pun intended) instead of endless poetry stuff.

Quinns: Oh gosh, as I wrote about in this little story, the Magic: The Gathering crew at my school caused me so much jealousy and pain.

Like you, I feel really conflicted about this. Obviously it’s a cool initiative, but also… this is a company offering a free taste of their product which can get terrifically expensive very quickly. I’m probably 75% cynical and 25% interested.

Paul: Also bleeping on my sonar this week is Between Two Castles of Mad King Ludwig, a game that immediately made me think of Between Two Ferns and then disappointed me so much when it proved to be nothing like that. Instead, publishers Bezier and Stonemaier Games are combining forces to put a new spin on Castles of Mad King Ludwig (which we talked about on this podcast) and the very curious Between Two Cities (we we talked about here).

This time around, the game has a cooperative bent, with each player working with the people each side of them to build the best possible castle, meaning that, as long as there are more than two people at the table, you’ll be on two competing teams but still looking after yourself.

Quinns: Both parent games are ones we liked but didn’t love, but perhaps their bouncing baby offspring will delight and surprise us?

Paul: Oh gosh, don’t anthropomorphise it! What if we need to put it in a bin in future. 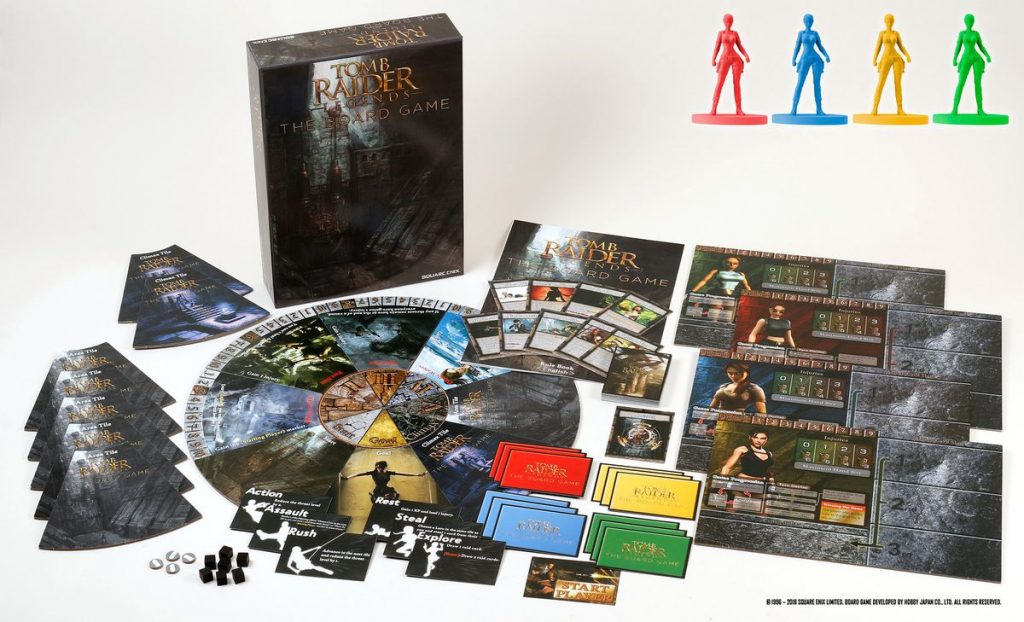 Paul: It would be impossible to let the week pass by without mentioning Tomb Raider Legends, coming straight from video game publisher Square Enix. Tomb Raider is a huge deal and while we can’t get excited about either the pedigree of this publisher, or by not knowing who the designer attached to this project is, we can at least… quote the text from the game’s BoardGameGeek entry?

“Tomb Raider Legends: The Board Game challenges you to raid tombs in a non-electronic play environment.”

Paul: Shall we just move on? 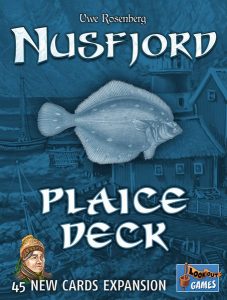 Paul: German publisher Lookout has a whole load of expansions coming for some of their very best games. Caverna! Isle of Skye! And…

Quinns: …What if we told you that Uwe Rosenberg’s fishing game Nusfjord was getting a deck of new fish? Can you sea the potential?

Paul: Come on, there’s a time and a plaice for puns like that.

Paul: You need to let minnow if you’re going to be like this.

Quinns: I cod do that in future.

Paul: QUICKLY MOVING FORWARD to the other expansions, we have the fan-designed Forgotten Folk, for Caverna. Introducing eight new fantasy races, from dark elves to trolls, each of which has its own particular quirks and unique rooms.

This is very cool both because it’s a fan passion project turned official, but also because it introduces so many cool new things. This creature is substantial! 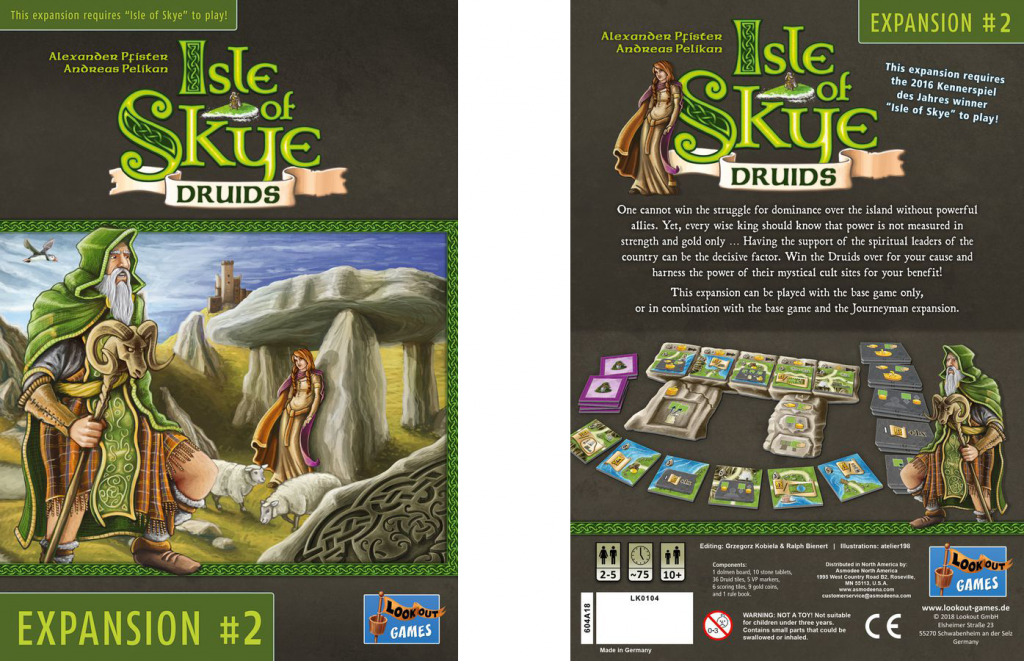 Quinns: There’s also the second expansion for the terrific Isle of Skye. You can watch Paul’s video review here, or read Matt and I writing about the first expansion (Journeyman) here, but soon there will be DRUIDS.

Dramatically, this expansion lets you buy not one tile a round, but TWO, the second from a special druid shop of ancient druidical sites. Imagine it. Imagine being able to buy two tiles a turn.

Quinns: Right? It’ll mean everyone’s islands are even bigger than they are in normal games of Isle of Skye, which I find ridiculously exciting. There’ll be even more land for the journeyman to hike across, and… goodness- I’ve just realised something very cool. The base game of Isle of Skye is an amazing, accessible tile-laying game. But by buying the expansions one after another, you’ll gradually turn it into a nuanced, heavy game. What a lovely way for someone new to the hobby to build confidence! 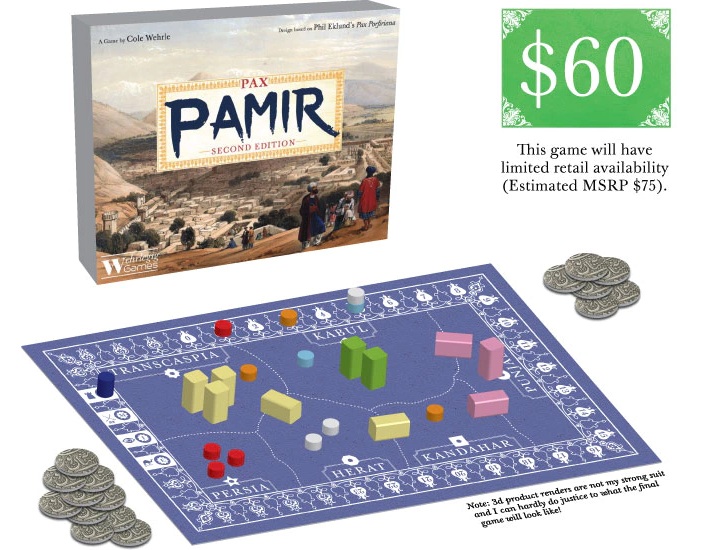 Paul: Over in the dangerous and wild land of Kickstarter, where only the strong survive and everyone is either predator or prey, my binoculars give me a glimpse of the new Pax Pamir, a second edition of the political game set in a nineteenth century Afghanistan beset by competing colonial powers.

Quinns didn’t fall madly in love with the first edition of this, but this revised version promises to address several problems with the original, including making player relations a much more central element. There’s every chance that this is a second edition that really promises substantial change and, with esteemed Root creator Cole Wehrle is one of its designers, I think this may well be worth us returning to some time in the future.

Quinns: I will say that I’m really hoping the second edition is great. The first game had a tremendous amount of potential. It was packed with ideas.

Paul: How about you, dear readers, do we have any Pax Pamir fans in the audience?

*It’s been brought to my attention by another member of the team (who shall remain anonymous) that I have got the lyrics and specifics of this Green Day song wrong. I have to admit that I can only think of three Green Day songs and many of the details of these songs escape me. Please accept my apology for this error and it was not my intention to upset the fans and supporters of this popular beat combo.