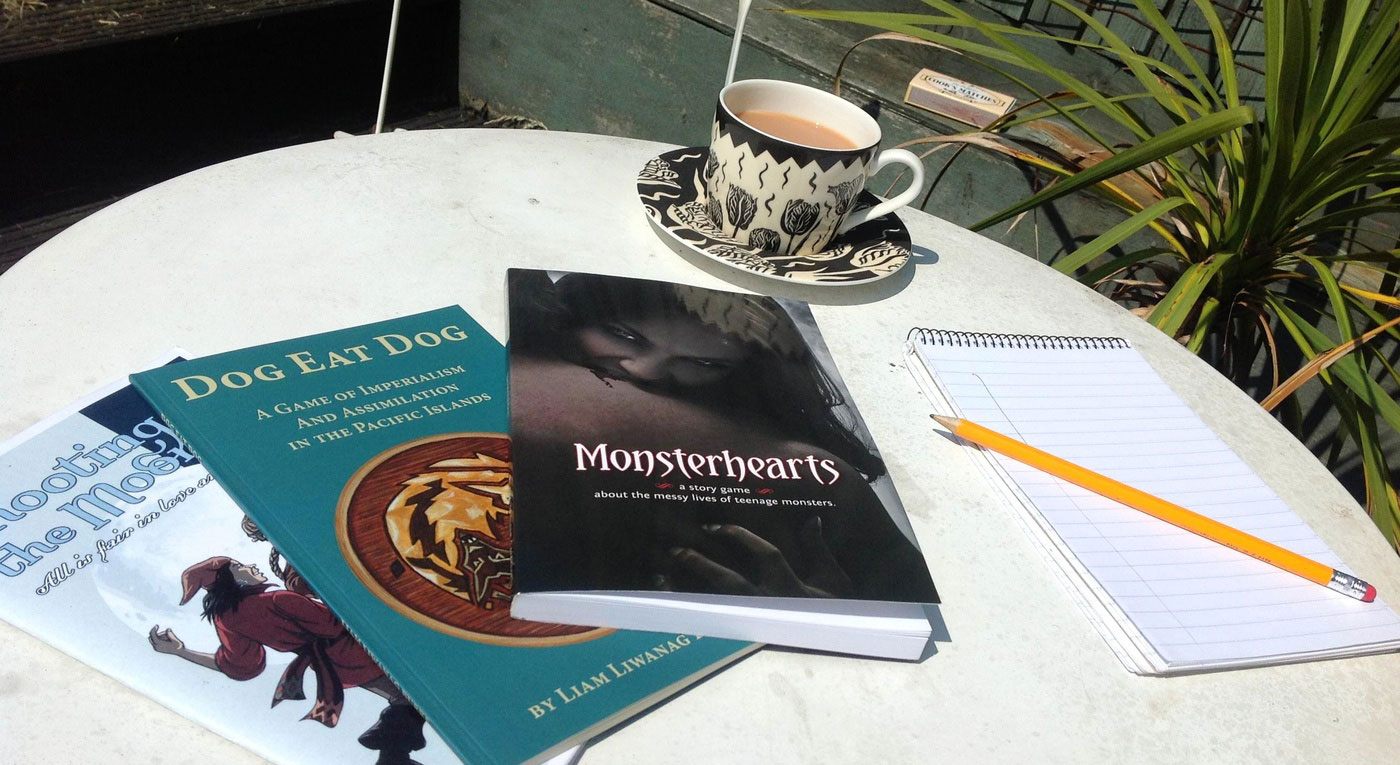 [Today is a momentous day in SU&SD history! We’ve fixed the toilets on level eleven. But also we’re expanding our remit from board and card games, to add just a little coverage of something else you can buy in a game shop: small, or “indie” roleplaying games. Anyone remember our review of Fiasco last year? Yes! Just like that.]

To help us out, we’d like to welcome back irregular SU&SD contributor Leigh Alexander. But who is she? Why is she here? And what is an indie RPG?]

Quinns: Who are you? Why are you here? And what is an indie RPG?

Leigh: Hi! I’m a gaming and culture writer who writes primarily about videogames, boardgames are finally getting under my skin thanks to SU&SD, and you KNOW what an indie RPG is, punk.

Quinns: It’s true. Indie RPGs take the format of Advanced Dungeons & Dragons and their ilk, with players sat around a table, rolling dice, pretending to be half-elves and what have you, but with a focus on story instead of simulation. Suddenly, these books offer low-maintenance games that you and your friends can finish in a single evening.

And oh my GOD! They’re all so fascinating!

My interest began with Fiasco, which simulates disastrous crime capers. The night starts with everyone assigning relationships and needs to one another (“You’re having an affair with him,” “He wants to save the zoo at any cost,”), then progresses through a series of scenes where dice simply show if it goes “well” or “badly” for your character, and by the end none of the players can breathe for laughing so much.

But there are tons of these games out there, each more ingenious than the last. I’m hooked.

Leigh: We’re going to have a lot of fun. But more than that, I feel like this is important. Spiritual ambassadorship, even. I’ll explain.

There’s a strange gulf that opened up for me between let’s-call-us geeky girls and their boy counterparts around adolescence. When high school began, for mysterious reasons kids who once shared loveworn dragon paperbacks suddenly seemed to have a harder time feeling comfortable together. Talk of lore and tips and tricks dried up in favor of warily considering one another from opposite ends of a crepe-papered gymnasium as slow jams groaned from tall speakers.

I tried to join in Dungeons and Dragons games but couldn’t reconcile my ideas about sprawling, romantic narratives with halting, anxious talk about saving throws and stat sheets. 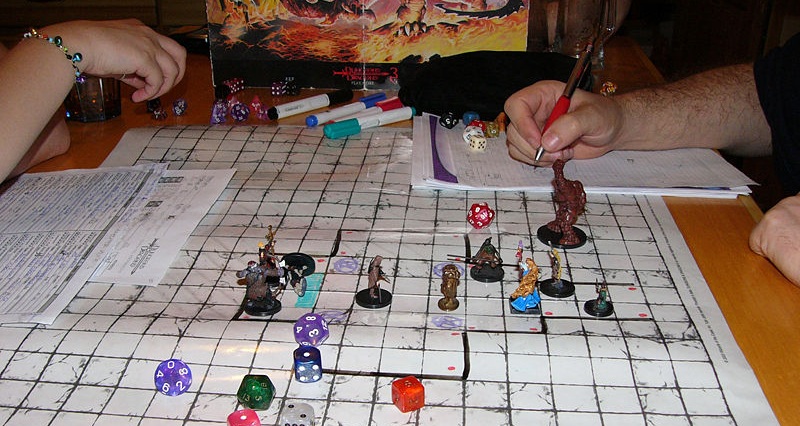 Eventually I decided I ought to try to become a Cool Girl and hid away all my porcelain unicorns, instead dithering around in cult AOL chat rooms after school. I wouldn’t have been caught dead rolling a 20-sided die.

I did carry on roleplaying in secret all through my teens, with strangers I’d mostly never meet. In chat rooms we did free-form character writing, and long character stories in instant message windows.

Indie RPGs feel like an opportunity for us to reconcile that, as an exciting, accessible and humanizing play space where I don’t have to deal with a single hex map (who’s intimidated by hexagons, wonders the Civilization fan? Me, hi there!).

Quinns: Yeah. Accessible is the word, since some of these games don’t even demand players do any acting. Microscope is a game where you simply craft a world together, by writing individual occurrences on post-it notes, or asking questions about other player’s events. “Why DID the ambassador blow up the castle?” Or in Shooting the Moon, two players describe their heartbreaking battle for the same beloved’s affections, without ever needing to step into character.

And you know what else? I’m forever going on about how vibrant player interaction is my favourite thing to discover in a board game. Designs that let you bond and butt heads with your friends always make for the most memorable evenings. And it dawns on me… aren’t indie RPGs games of nothing but player interaction?

Leigh: Yes. Though I never thought I’d say something like this: It’s the rules and systems that I’m excited about. When I used to RP online back in the day, we were so free-form it often devolved into ego wars, just one person trying to de-legitimize another’s wishes so they could get their way. I can’t wait til we play Monsterhearts, which is pretty specific about some aspects of who you can be and how you can interact with others.

Constraints make true creativity possible, and they keep things fun and fair for everyone. I bet I’m going to have an even better time with roleplaying games as an adult than I did as a kid.

Leigh I fear this is the beginning of a narrative where you regret converting me.

Leigh I’m going to beat Quinns at the roleplaying

Quinns: That’s not how this works 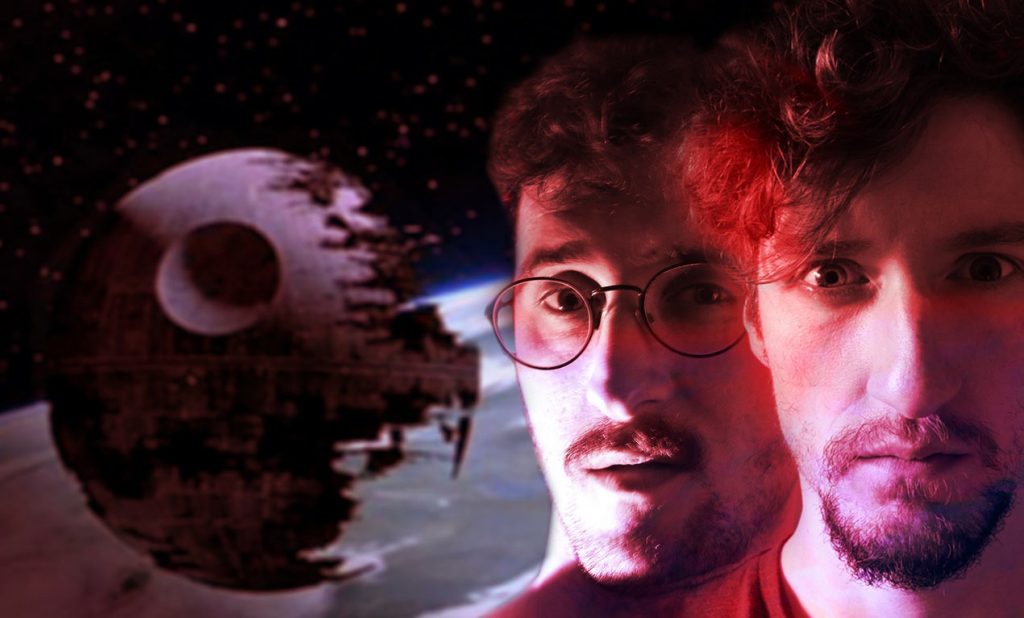