Thanks to Meeple Mountain for our header image.

Quinns: Like a blogging Mary Poppins, today I’m floating down from the sky to add a little magic to your life. (Don’t look up my skirt and we can both retain our dignity.)

This week’s Games News offers not one, not two, but six(!) unique Kickstarters from established designers. Some people are saying that the ever-swelling bubble of board game Kickstarters will have to pop at some point. Me? I don’t know about that, but I will say that I’ve never before seen a month where Kickstarter board games have managed to make press releases from more established companies seem repetitious and dull.

I thought that deserved a bit of a celebration. Let’s take a tour! 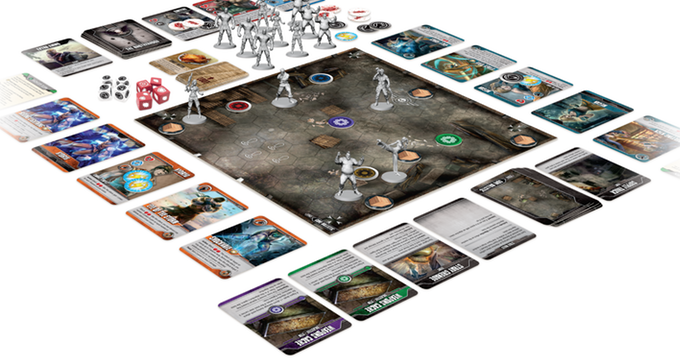 Pictured above is the beat ’em up-inspired Street Masters, which is currently enjoying a Kickstarter for an enormous expansion in the form of Street Masters: Aftershock.

After hearing about this game on the excellent So Very Wrong About Games podcast, I’m super excited to don my favourite bandanna, call up some friends, and beat up some bad dudes. Coming from veteran designers Adam and Bradey Sadler (who previously worked on Descent 2nd edition and the beloved Warhammer Quest Adventure Card Game), Street Masters is a co-op game where, in the manner of Gloomhaven, players each pick a character and use a unique deck to battle their way through fixed stages.

No, it doesn’t have the hype or epic scale that defines Gloomhaven, but it does look significantly sillier, which I’m very much up for. In fact, Matt and I will be getting dressed up and playing it on our next Twitch stream on the 8th Nov. I can’t wait. How many bandannas can two men wear? We’re going to find out. 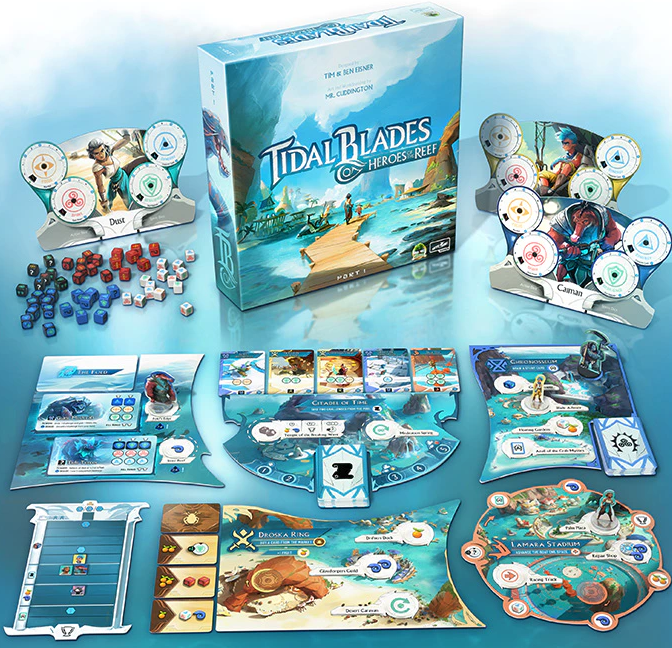 We can say this about Druid City Games: They put together some good-looking packages.

The world of Tidal Blades: Heroes of the Reef requires almost as much explanation as the game. The work of husband and wife team David Forest and Lina Cossette, Tidal Blades offers a colourful, tropical fantasy world where crocs and salamanders live in harmony with humans. But oh no! Aquatic beasties are constantly emerging from the waves to wreak havoc on these settlements, and it’s the job of the Tidal Blades – basically moist heroes – to keep society safe.

As for the game itself, oh my gosh. The core of the game is worker placement, with everyone carefully selecting which action they want to do (and deny to their opponents), but… well, rather than explain everything, I’m going to just copy some of the Cones of Dunshire-like writing from the Kickstarter itself.

“By competing in Challenges you will increase your hero’s Traits, allowing you to… pull off wild Stunts… and unveil asymmetrical Character powers.”

“Advance on the Champion Board by competing in front of the Elder Tidal Blade, showing off your watercraft-manoeuvring skills on Lamara and killing Monsters.”

“Master the use of shells too strategically alter the time-continuum and reattempt your bad rolls.”

Perhaps most excitingly, the deluxe version of the game comes with squishy fruit tokens. Is this the harbinger of a new fad? Will all board game components be soft and pliant by 2020? Watch this space. 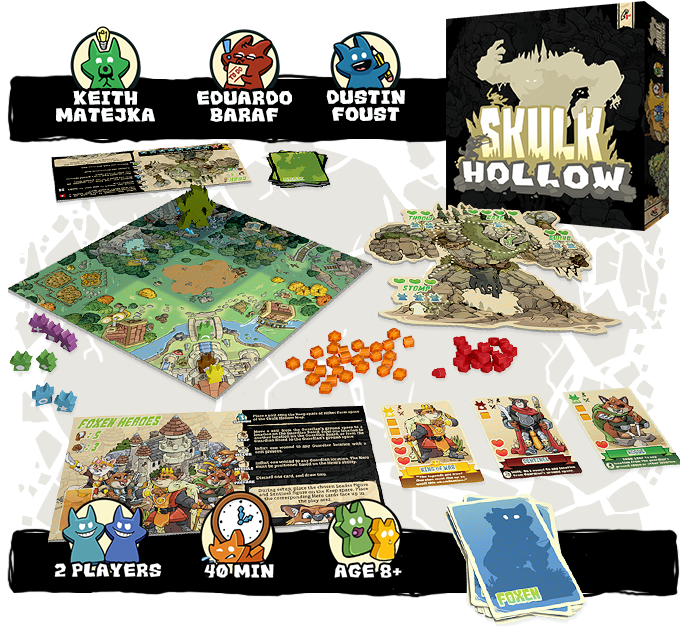 2 player, radically asymmetric game Skulk Hollow asks an important question. “What if the hero in Shadow of the Colossus was a gang of foxes?”

In other words, one player in Skulk Hollow plays an enormous stone titan (represented on the main board by a merely large wooden token), and a second player controls a team of foxes hell-bent on clambering up the thing’s legs and hacking away at its joints. Excitingly, foxes who climb onto a titan are then placed on a second boardso you can track precisely where on its body they are, a board which gets swapped out depending on which titan you’re playing.

Frankly, Skulk Holllow’s Kickstarter outlines a game so wildly inventive that (as with our recent review of Root) I can’t quite believe that it’ll be the sort of robust experience that this site can recommend. But with such lovely art and a playtime of under an hour, I’ll be elbowing people out of the way just to try it. 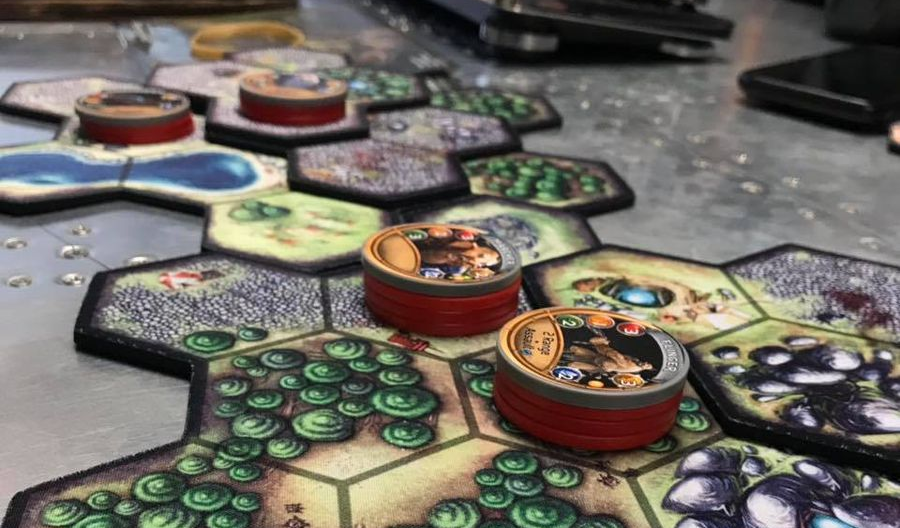 Cloudspire is (as yet!) the most successful of these Kickstarters, having slurped in almost half a million dollars from 3,000 eager backers.

From Chip Theory Games, the publisher & designers who brought us the startling plasticky Too Many Bones, Cloudspire is a hex-based strategy game inspired by MOBA video games like League of Legends or DoTA. Players will send stacks of “minion” chips marching out from their respective bases (with powerful chips perhaps hidden below a weak one on top of the stack), construct towers (as in tower defense video games), and even issue moves to special hero chips that can unearth resources or join in fights.

All of which might sound fairly cookie-cutter for a video game, but in a board game it looks fascinating and exciting. Throw in some curious production decisions and some unique factions and you get something that looks dramatically different while using a very stable foundation. Very cool!

We were able to help lots of publishers to film little preview videos for their games while they were at SHUX, and one of those games is the heavy eurogame Barrage, which is currently doing very well on Kickstarter.

Set in a Teslapunk re-imagining of the 1900s, Barrage tasks players with building hydro-electric power empires. The art and components look gorgeous, and the designers – Tommaso Battista and Simone Luciani – couldn’t be more well-established, being the minds behind Tzolk’in, Marco Polo, Grand Austria Hotel and more.

The two mechanics being showcased by Barrage both get me hot under the turbine. First off, water will trickle trickily down the top of the board to the bottom, generating power only for the players who have power plants in the right position on the board’s various runnels. Second, each player’s personal board will have a special wheel that “locks up” your resources when you assign them to tasks, only eventually releasing them after enough rotations of the wheel.

And, in my favourite extravagance since Tidal Blades’ squishy fruit, the deluxe version of Barrage will be tiered like an actual (very slight) hill for the water to flow down. SUCH EXTRAVAGANCE! Truly, when future generations excavate the board games of the 2010s, they’ll be like “Dang, these people had some cool-looking board games.” 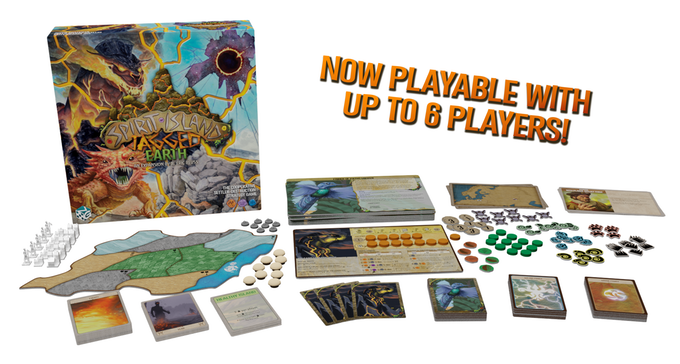 Paul might not have gotten along very well with anti-colonialist co-op Spirit Island in his review, but lots of people think it’s the best thing since sliced… uh, colonists. Anyway, while the first expansion added two playable gods and one new colonial power, so that the features list reads (and I still find this hilarious):

This second expansion adds so many itty bitty weird things that I have absolutely no idea what I’m reading about. Still, it’s probably good news for Spirit Island fans.

That’s it for the Games News this week! Phew. So, what have you lot been playing while we were away? 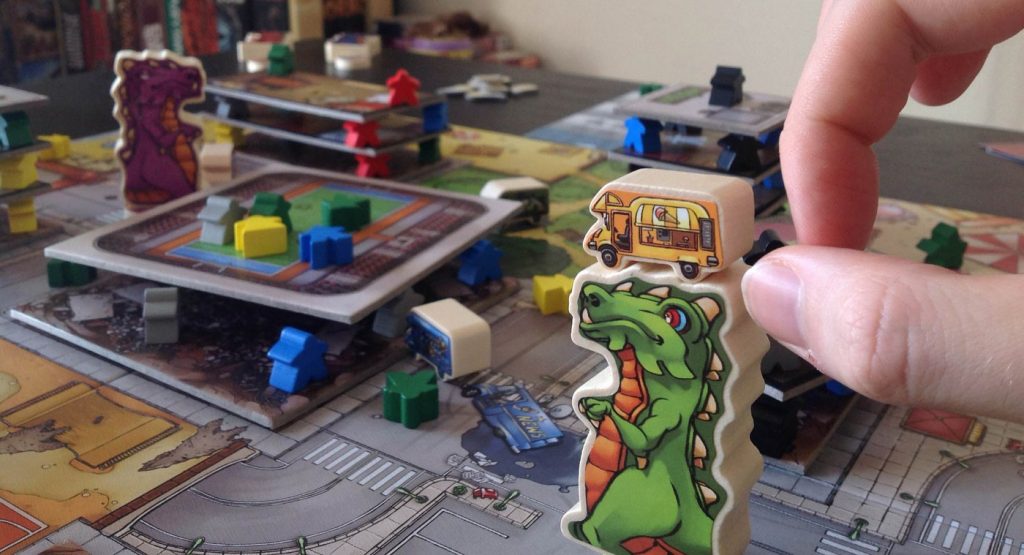