Ava: Ooh hoo hoo. It’s late in the day for a news harvest, but I’m sure there’s still some pickings out in the fields. Let’s have a little news-pumpkin fesitval and think about chickens, gems, memories, moods, pretty mosaics, old worlds, new boats, weird moons and sadness.

Ooh I’ve gone autumnal maudlin. Let’s see if BoardGameGeek can shake me out of it.

Due to a clash with BGG Con, head honcho W Eric Martin won’t be making it to the Tokyo Game show this year. This is a shame as his tour of the Japanese game design scene is always pretty exciting. Instead he’s giving us a long distance roundup of just a few games.

I was glad to see him cover a new game from Oink Games called Fafnir, as his wrestling with the translation yielded more information than I could wrangle from google translate. Fafnir will have you chasing after a chicken that lays gems of many colours, and then tasks you with trading those gems with Fafnir on future rounds, in particular sorts of auction. It looks adorable, just like everything else Oink.

I’m also curious about Remember our Trip, from Saashi and Saashi. This combines town building and iffy recollection. You’ll be rebuilding your memories of a trip to a Japanese town, matching patterns on your own board, that you can then add as buildings to the shared board in the centre representing the actual reality of your journey. It does actually sound as elusive as trying to reconstruct an old holiday with a group of long-confused friends looking at overexposed old photos, which is pretty impressive.

Sticking with psychological oddities. Asger Harding Granerud and Daniel Skjold Pedersen, the design team behind Copenhagen (the game, not the city) and Deep Blue (the game, not the metonym), have put together an abstract emotional game in the form of Inner Compass.

‘Take a deep breath and reflect for a moment on what is really important to you in life.’ That’s the first step of setup, apparently, and I’m already nervous.

Inner Compass will have you navigating life on a map made up of blocks representing different emotional states and drawing cards that also represent emotional states. Once you have them, you can cash in powerful memories by releasing these little bundles of feelings in the form of collected sets. There’s a few wrinkles about trying to be mature enough to have emotions at the right time, effectively manipulating a little emotional market off to the side. There’s also secret objectives representing the state of mind you were geared towards, providing points for having had the right sort of moods in the right sort of places.

I’m not sure I got the feeling of feelings from a read of the manual, but I trust these two designers to be doing something interesting, even if it’s a little abstract. There are definitely ideas here, and I’m curious if it really can give any insight into the right way to approach this nightmarish roundabout we call ‘life’.

Possibly set my sights a bit high there. Hopefully it’ll be fun way to spend a few hours with good friends. ‘If this isn’t nice, I don’t know what is.’ 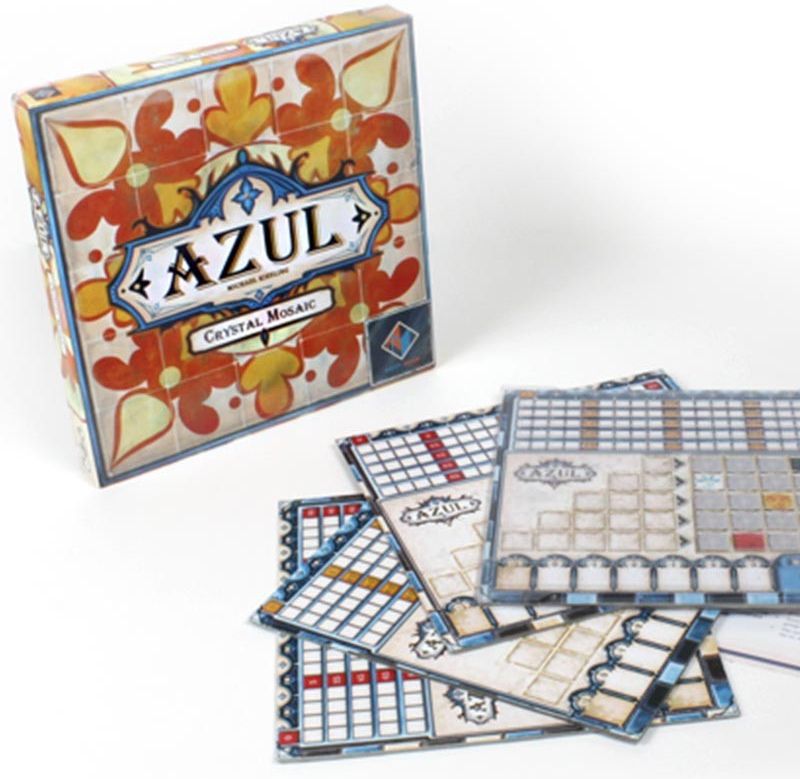 Today in ‘expansions I’m not entirely convinced by’’ we have an addition to the absolutely stunning quasi-abstract mosaic builder Azul.

Azul: Crystal Mosaic adds some new player boards and a little plastic overlay to the Portuguese puzzle puddle. The new boards start with with a few pre-marked spaces, leaving the rest blank for you to get stuck into. I assume the rule remains that no type of tile can be in the same row or column as another of its type, as was true on the really quite boring blank reverse board of the original game.

The arguably more exciting element is a plastic rack to lay over the board to help your tiles stay in place. I’m all in favour of this sort of thing, as it can improve accessibility for people with motor difficulties. It’s a wonderful game, now easier to play for more people. That’s lovely. Moving on to news I’m definitely less angry about than some people, we have the announcement from Games Workshop that they are returning to their old fantasy world, The Old World.

Games Workshop annihilated it’s fantasy setting just a few years ago, mostly metaphorically, but also in terms of tournament and official rules support. This was quite controversial at the time, as it meant a lot of collections people had sunk hundreds of pounds into became unofficial overnight. The Age of Sigmar setting did re-invigorate the game in many ways, allowing them to slough off a trough full of rules, and simplify their approach. This was also controversial, and Games Workshop has been slowly responding to feedback and adapting their approach ever since.

Now some people are pretty upset to find that the collections they burned, sold, traded or got rid of may now be playable again, as GW have announced a renewal of the Old World setting at some point in the future. It sounds like it won’t in any way be replacing the Age of Sigmar universe, but supplementing it.

The company seems pretty thoroughly damned either way. If this is a response to the upset fans, it’s taken so long that a lot of people have accepted the need to move on, in a way that makes moving back doubly frustrating. It’s a sticky wicket, as we say in England. A sticky, skull-encrusted wicket. (Kickstarter United is still seeking recognition from Kickstarter, and we’re still supporting them. They’re still not requesting a boycott, although we are hoping to support alternative crowdfunding platforms to give frustrated publishers more options, so if anyone knows of good projects happening elsewhere, let us know!)

Lovely walk simulator Tokaido is getting a sequel, and do you know what’s lovelier than a lovely walk? A lovely boat.

Namiji is now on Kickstarter, and looks as gorgeous as Tokaido, but with a significantly more sailing. As with Tokaido, whoever is in last pace on the beautifully illustrated track takes their choice of which space to stop on. Once you land your boat somewhere, you take the relevant bonus, and likely add a beautifully illustrated card or token to your collection.

The Kickstarter edition comes with gorgeous boat miniatures and even more miniature paper boat offering tokens. These obviously aren’t necessary, but they are gorgeous, and I suspect the main risk of this Kickstarter is whether it’s actually got enough in it to differentiate it from Tokaido, and whether it’s worth having both. Additions include a little board for collecting fish on, and a little push your luck crustacean minigame about grabbing shrimp but hopefully not grabbing too many crabs. I guess your mileage will vary depending on how you feel about imaginary representations of seafood. To Ganymede and Titan, yes sir, I’ve been around. And so has Kickstarter, to Titan at least, with just 9 hours left on the campaign of Titan, a game about a moon called Titan.

You’ll be visiting the saturnine moon to ruthlessly strip-mine and hoard resources, as good (aka bad) businesses do. It promises a combination of network building, worker placement and heavy metal management, all laid out on a faintly ridiculous three dimensional crater colosseum of economics. You’ll build a network of rigs and pipes to slowly extract what you can, move it around, and hopefully swap it for points. It promises high complexity and fluid mechanics, but I’m not sure that…holds water.

(I really don’t deserve to over-reach on that terrible pun but…it literally won’t hold water because the bowl shaped crater is made up of six parts that probably don’t form a watertight bond, so if you are actually hoping that it’ll be a reasonable back-up bird bath if the game is bobbins, you might want to look elsewhere).

The whole thing is tied together with some lovely B-movie Sci-fi aesthetics and there’s a plethora of optional add ons to make your trip to Titan more exciting. I’m more into the box art than what’s in the boxes, if I’m honest. Once again I find myself sharing some sad news from this week, as game designer Chad Jensen has died after a long struggle with cancer.

Chad is best known for the thrillingly convoluted Combat Commander, a tactical wargame that has exhilarating card driven play and a smart event system that I would love a more accessible game to steal. He also created Dominant Species, a widely hailed large scale strategy game that has players acting as the stochastic processes of evolution upon particular families of animals. It’s one I’ve been keen to try for a long time. Chad will be greatly missed, but I suspect people will be playing his games for a very long time.