Matt: After being firmly informed by readers last week that it is “never too early for ice-cream”, I have been scavenging in a safe radius around the news desk, seizing control of Viennetta factories, busting Cornetto bunkers wide, wide open – and generally taking control of all dairy choke-points. My mastery of breakfast sugar knows no bounds, and I am now fully prepared to dance upon the news desk.

Quinns: I just woke up and WHY IS THERE CREAM EVERYWHERE

…Cream, but also news. Let’s get stuck in. 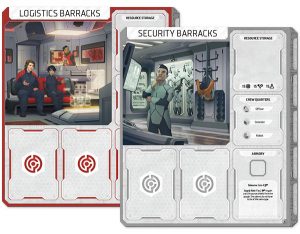 Matt: I continue to be ridiculously jazzed for Plaid Hat’s upcoming Gen7 (see our podcast here, or watch the new video trailer here), to the point where Quinns has (very wisely) begun tempering my expectations when we both talk about it. High concept sci-fi is what I go to school for, so I’m desperately hoping this co-op campaign game has serious legs. These legs have already been pre-extended, with the announcement of Gen7’s first expansion: The Breaking Point.

It feels pointless to mention the bits and bobs it adds to the game when we’ve no footing to estimate how they might change it, but the interesting addition is an additional new competitive story, taking place after the main campaign.

Pitting different departments against each other with the hope of one faction taking control of the ship, it’s probably a bit like when Big Kev from Logistics held a coup with a staplegun, and locked the head of HR in the stationary cupboard.

Quinns: Oho! It says here that the addition of a “Logistics” department will allow you to play the base game’s campaign with up to 5 people. However, “Security” will only be playable in the Breaking Point campaign.

That’s probably for the best. Back when Matt and I playtested Gen7 at Gen Con, the most aggressive thing a player did was refuse to show up to a meeting, and that was AWFUL. 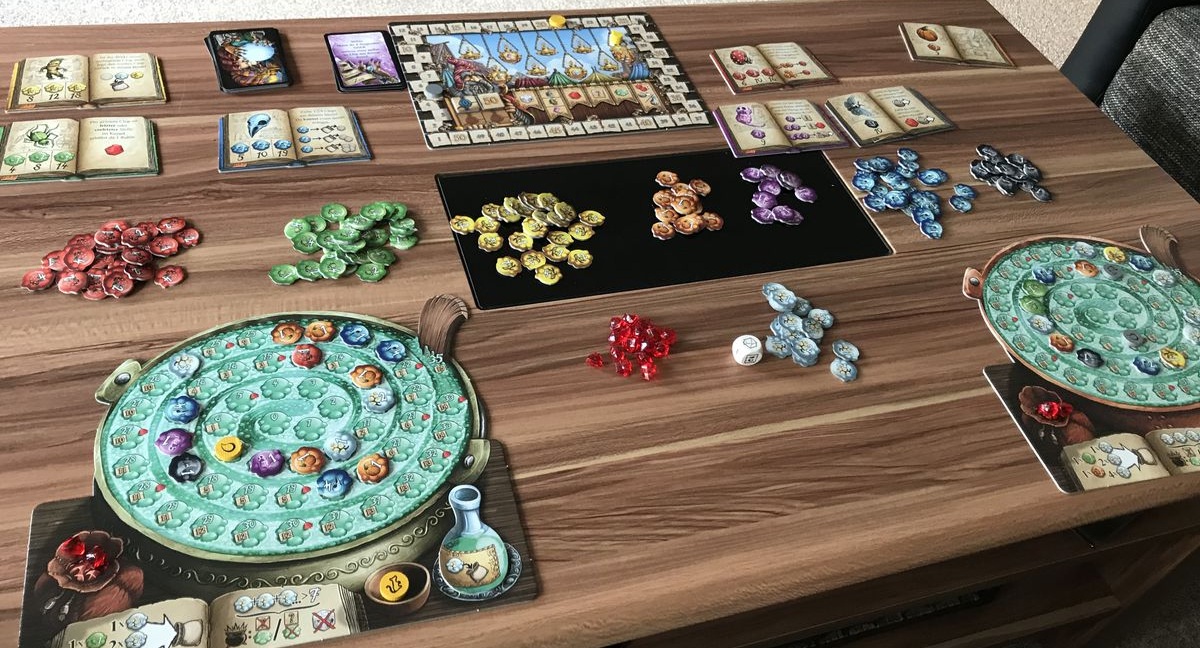 The Quacks of Quedlinburg has found an English-language publisher and should be available in shops in the next few months. That’s awesome news, since not only did it win a prestigious German award, the Kennerspiel des Jahres (or “Critic’s Game of the Year”), and not only is it by Wolfgang Warsch (the playful designer behind Pretty Darn Clever, The Mind and Illusion) it’s a game about being a cheeky criminal. Hooray!

Players in the Quacks of Quedlinburg all represent charlatans making visually arresting but useless miracle cures. Everyone holds a real-life bag full of chips representing their ingredients, and on each round everyone plays a push-your-luck game of trying to pull out as many chips as possible, one after another, without causing their cauldron to explode.

After everyone has either decided to stop adding ingredients or exploded, you all gain victory points as well as money, which can be spent on different ingredients to permanently add to your bag.

A little bit of strategy, a little bit of comedy and a whole lot of gambling? I can’t wait. I especially like the rule that players all draw simultaneously, but if someone decides that they want to stop pulling chips, they still go through the motions but then pull nothing out of the bag, letting them psyche out their competitors. Beautimus! 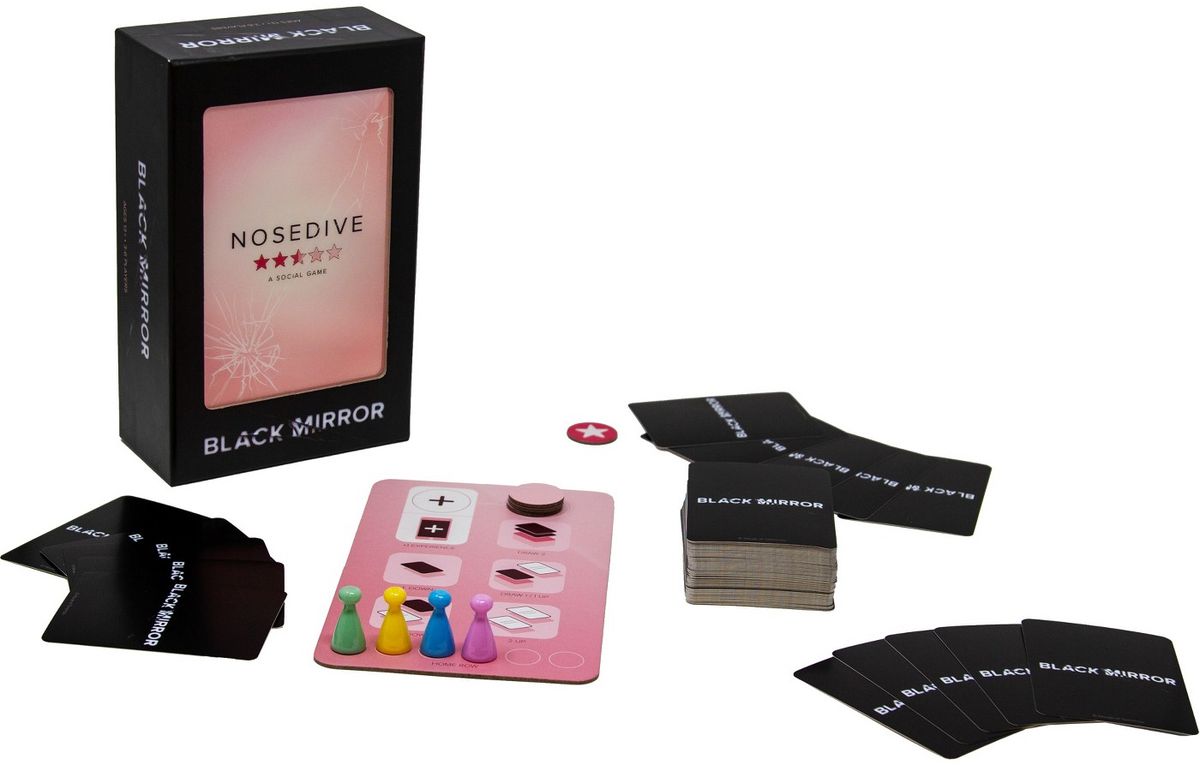 Matt: Pairing a social game with an app, next month sees the release of Nosedive – an Asmodee thing based on the Black Mirror episode in which Instagram culture pervades all interactions as part of a social credit system. The episode is a fun, grim romp that unfortunately got it wrong when it comes to the consequences of being despised – you aren’t unable to work if ostracized from society, you’re probably running an obscenely successful business on YouTube.

I emailed Brooker to ask about this announcement, and he wasn’t really able to talk about it very much – but I did promise to convey his dream of one day seeing the creation of a Black Mirror pinball table. If you’re a literal Pinball Wizard capable of casting such unstable spells, do leave a comment and we can see about making this happen.

Nosedive is being Handled by Asmodee rather than Brooker or his talented partner-in-crime Annabel Jones, and this Target exclusive looks very small-box Christmas-gift-y as far as I can tell. Dark social satire can go very badly in the wrong hands, and while it’s popular these days to take the piss out of Black Mirror it’s amazing how frequently on-point it is. San Junipero was and still is one of the best things I’ve ever seen.

An excellent writer on the topic of tech and culture, coincidentally, is Leigh Alexander! Quinns, did you know that that is your wife?

Quinns: Oh god, we should spare the poor readers from me bigging up Leigh. When she launches her first proper speculative fiction book I’m going to be bothering the SU&SD readers to buy it for weeks on end. My nagging will BLOCK OUT THE SUN

Matt: Righto. OOH, talking of bothering people with fiction, this week I appeared on the Beef & Dairy Network podcast! It’s my favourite podcast in the world, but do be warned it’s rather grown-up and sweary. I’d really recommend it, it’s a terribly strange and funny show.

Quinns: Oh, it’s the best podcast, and Matt’s appearance on it is the double-best. 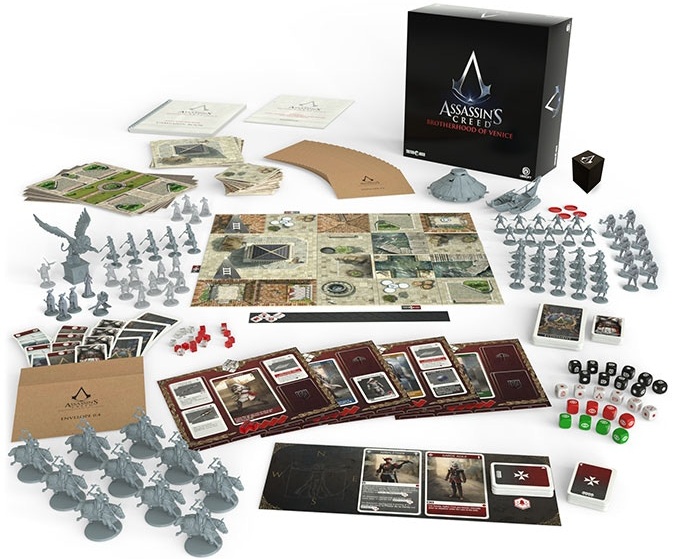 Matt: Oh no Quinns it’s a Kickstarter that I want, sound the alarm! Assassin’s Creed: Brotherhood of Venice is a game being made by Triton Noir – the studio that made the rather excellent V-Commandos. Interestingly, this mechanically appears to be basically the same game.

And honestly? I’m totally fine with that. New tweaks have been added and there’s a story campaign to play through – and I really hope that the different types of enemies in this huge box actually feature different rules, but the core of the experience looks almost identical, which is great news because frankly, gosh, it’s quite good.

Innovation and iteration in this industry is obviously invaluable, but there’s something to be said for recognising when systems are so solid that they’re worth re-using – we’ve talked before on the podcast about how Fantasy Flight invent a brand new combat system for every game they put out. Sometimes that’s a great idea! Sometimes, it isn’t!

With tie-in board games like this, I think it’s so important for the hobby that what ends up in the hands of fans feels tight: it might be the first modern board game that they play! It’s why we came down a little harder on Fallout – there’s a world of innovation to dig into in this wonderful hobby, but that’s no good to anyone who dips in for a moment and then wanders away.

Oh! And this board game’s got Ezio in it! The character from the Assassin’s Creed games that was truly likeable. It turns out the head of Triton Noir was actually ex-Ubisoft (Assassin’s Creed’s publishers), so it seems like everything is simply falling into place. Still, it’s a little expensive and mini-heavy for my tastes, but each to their own. 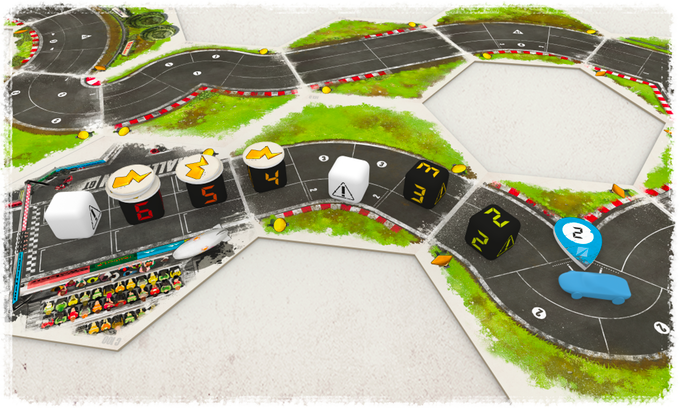 Quinns: This Kickstarter for a snazzy new re-imagining of Jean-Christophe Bouvier’s Rallyman has already won my heart, because I’ve just had a Google and “rallyman” is not a term used in professional rally racing at all. This is like making a game about restaurants and calling it “Cookeryman”, or calling a horse-racing game “Horseman”. I love it.

The original Rallyman won a cult following after it was released in 2009, and the Kickstarter has everything I look for in a new edition- significantly improved art, expanded features, and a cautious tweaking of the original rules by the people who love the game the most.

Ever since our review of Flamme Rouge, it’s bothered me that there aren’t other racing games that SU&SD can recommend, especially when racing is so baked into the core of the hobby thanks to actual centuries of roll-and-move games. As such, I’ll be grabbing a review copy of Rallyman: GT at the earliest opportunity.

Matt: Big City Big City what you gonna do, what you gonna do when they come for you? It’s the question we’ve all quietly posed for years, and suddenly now it’s outside our front door. From Container designer Franz-Benno Delonge – and Mercury Games, the same publisher that put out our recently reviewed Jumbo Edition of Container, this Kickstarter celebrates the 20th anniversary of Big City with another massive box full of massive bits to put on your table.

Thankfully using plastics this time instead of the weighty, fragile fun that comes with moulded resin, we’re still not wholly sure what to think about this – massive expensive components actually made Mercury’s edition of Container *harder* to recommend, but at least having seen our review of Container people should feel they have a decent idea of what to expect from this new Kickstarter. Interestingly, rising manufacturing costs mean that, like Container: Jumbo Edition, this particular print run of Big City will likely be the only one of its kind.

I’ve gotta say though, it’s pretty cool to see big minis of buildings, don’t you think? There’s so much focus on miniature people in this hobby, but a game in which you build a city by actually placing cool little buildings – that adds a vertical texture that feels genuinely exciting. Am I gradually evolving into a model train enthusiast? I always hoped I’d turn into a Gyrados. 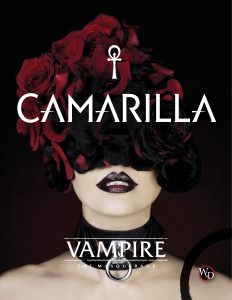 Quinns: Well Matt, I can offer you something that sounds like a Pokémon-style transformation- Vampire: The Masquerade creators White Wolf turning into a Black Sheep.

This week the World of Darkness creators came under scrutiny for “crude and disrespectful” use of the Chechen government’s violent homophobia as a plot point in the new Camarilla sourcebook.

Although Vampire’s 5th edition describes itself as a game of “personal and political horror” — arguably welcome in the year 2018 — I’ve become skeptical about White Wolf’s approach to “edgy” material. The now-excised section of the sourcebook suggested that ruling vampires encourage the prosecution of LGBT people to assist with their own need to drink blood. The idea that government abuses might craft a shield for reprehensible behaviors is an interesting idea for an RPG, and nobody’s saying games automatically can’t go to serious places — simply that to do so requires a level of sophistication and respect for an ongoing tragedy that White Wolf failed to comprehend.

In 2017, the United Nations found that human rights abuses including beatings and torture against LGBT people in Chechnya represent acts of persecution and violence on an unprecedented scale.

In response to criticism of the sourcebook, a spokesperson for Paradox Interactive, owners of White Wolf apologized: “Real evil does exist in the world, and we can’t ever excuse its real perpetrators or cheapen the suffering of its real victims,”  Shams Jorjani said. “In the Chechnya chapter of the V5 Camarilla book, we lost sight of this.” 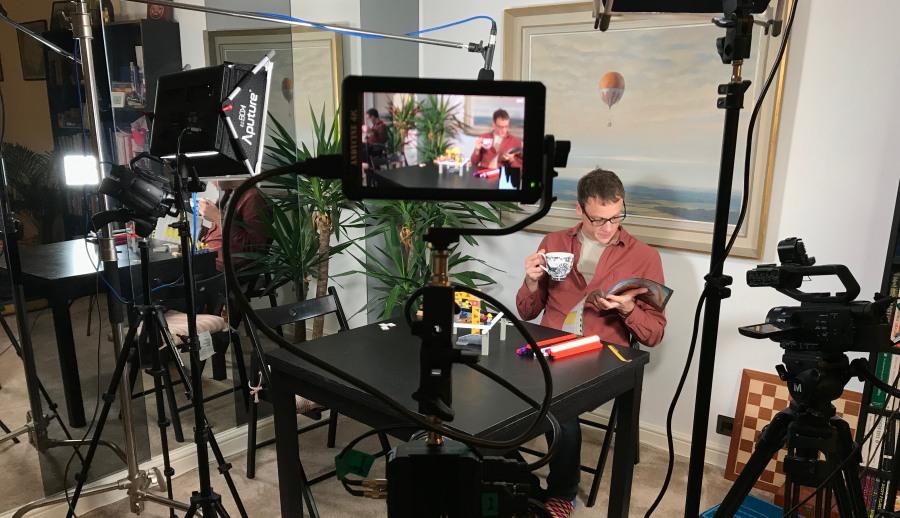 Runewars Just Got Even More Epic