Ava: Twas the news before Christmas, and all through the office,
Not a creature was newsworthy, not even the…..boffice????

I should’ve thought more carefully before I started that. But it’s the end of the year, the UK election last week was horrible, and I’m pretty sure British culture is entirely built up on the principle of phoning it in on the last day at work (and failing to own up to the horrors of our colonial past).

Quinns: Ava, don’t talk about phoning it in at work while I’m here! I didn’t get you a Christmas present, but if I *had* I would now pitch it out of my window, in anger.

Ava: Let’s get this news down this chimney, and hope someone’s left us a mince pie and a carrot.

🚨Exciting news! 🚨
Remember a few weeks ago, when KSRU asked our leadership to commit to neutrality? After a lot of back and forth, today we're very pleased to sign an agreement that guarantees a truly fair process moving forward. https://t.co/93w6HUGdDL

Ava: Calloo callay! Oh frabjuous day! Yes, I’ve already done the Jabberwocky in the news this year, but I am a little bit hype that a thing I’d given up hope on has happened. There’s some distinctly neutral-sounding news coming out of the nascent Kickstarter union, Kickstarter United, and hopefully it’s the start of us not having to caveat every kickstarter (except about the general unreliability of kickstarters).

Kickstarter United are going into media blackout as part of a neutrality agreement with Kickstarter management, which they think indicates a willingness to engage with a union ballot without interfering. I’ll be keeping my fingers crossed and sending solidarity to the workers until we hear more. Good luck! Keep it up! Get organised! 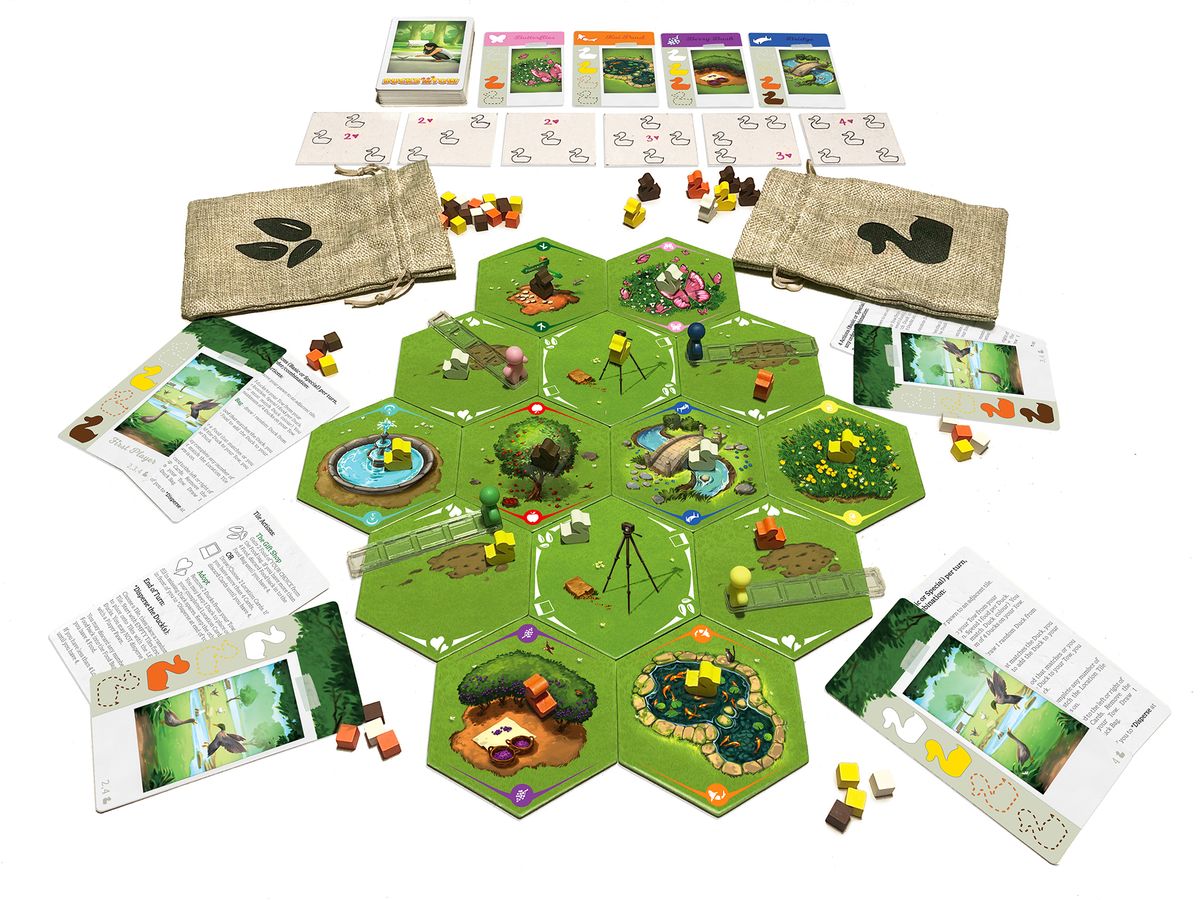 Quinns: The news that Kickstarter might be becoming a less hostile environment for its workers has arrived right on time. I feel that we’re getting our ducks in a row.

Quinns: Stephanie Kwok’s Ducks in Tow is a fabulous-looking Kickstarter that will finally let us do what we all want to do in city parks: adopt the ducks as our very own.

Players in this parochial puzzler first have to tempt ducks with colour-coordinated food, which then (through the fantastic use of some translucent plastic) sees the birds following you as you wander around the park, and finally you can finally drop them off at locations so that you can build patterns of birds on your tableau of cards.

If you’ve ever heard Shut Up & Sit Down complain about over-done eurogame themes (e.g. medieval merchants, running a small business, colonising the bejeezus out of an isolated nation), Ducks in Tow is a showcase of what the genre could be doing instead. This setting is innovative, charming, friendly and silly, and will be made that much more so with a free “Angry Goose Expansion” in every pledge.

Ava: I like how far this is leaning into the phrase ‘ducks in a row’ by having at least three mechanics based on rows of ducks. There’s some strong commitment to the bit here. 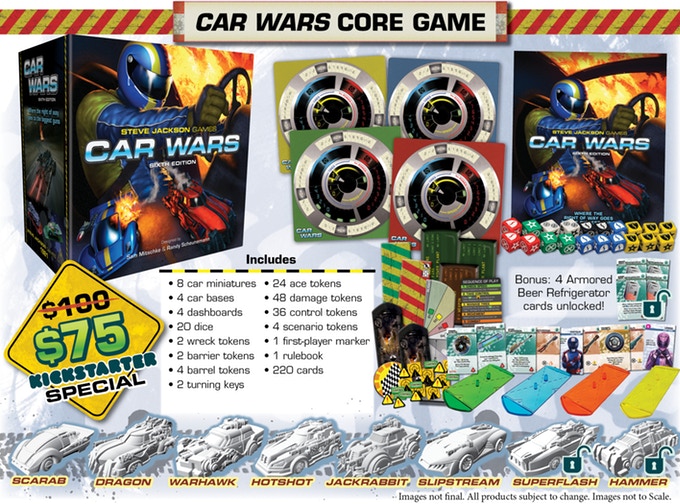 Ava: Car Wars is a very old game from Steve Jackson Games, and it’s getting an overdriven reboot in a Kickstarter for its sixth edition. A combination of the twin arts of racing and fighting, Car Wars treads familiar territory, and promises miniatures-based combat with lots of dice, guns, and sharp turns. Spruced up with lovely little cars and a little chipboard turning tool, it could be interesting. But hoo-boy is some of that graphic design looking dated. I guess that’s what happens when you’re running into a rebooted retro racecar rumble with nothing but nostalgia in the tank.

Quinns: Oof. Getting me to back this would be a tough sell when I’ve only heard great things about Gaslands, which can be neatly summarised as “The X-Wing Miniatures Game with Hotwheels cars”. We’re actually hoping to offer a review of Gaslands on the site early next year, if our excitable readers can bring themselves to wait…

Ava: I definitely slammed my brakes on this one, but as a counterpoint: I could sing ‘Car Wars Car Wars, what you gonna do? What you gonna do when the car wars you?’ to the tune of Bad Boys, and I think that would make me very happy.

Quinns: As with the arrival of bad boys, a car war is something I don’t know how to react to. It’s so true! 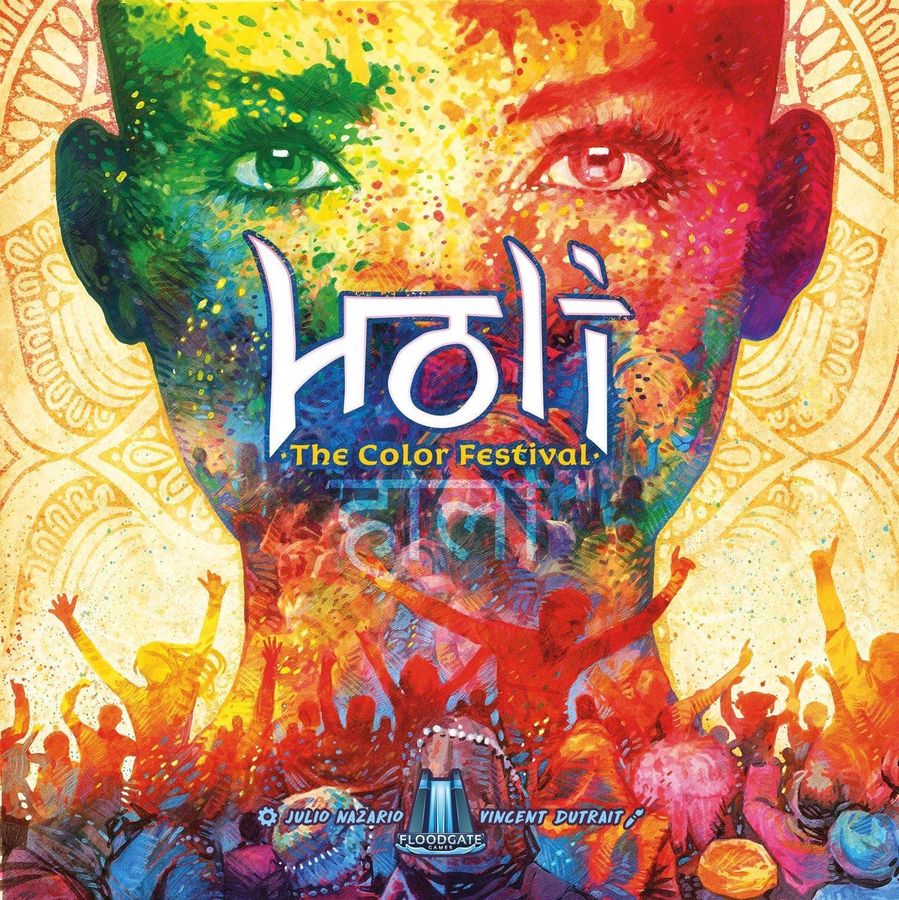 Ava: Okay, okay, so I wasn’t going to link this, because the bit that intrigues me most doesn’t have a picture yet, but then I found a really duff justification, and I just want to bring it up.

Coming soon from Floodgate Games and Julio E Nazario is Holi: Festival of Colors, which currently consists of a gorgeous Vincent Dutrait cover, and a few cryptic sentences about what the game will actually be like. I’m enticed by the prospect of a very colourful area control game with a three tier board, but I also have no idea what it’ll actually look like. Based on the paint covered Hindu festival, this could be pretty, but we don’t know much it’s going to explode off the table until we get more pictures.

Quinns: So why exactly are we covering it now?

Ava: Well, it’s entirely because when I went to dig up more info on the Floodgate games website, I found they had a game in their back catalogue called ‘Bad Maps’.

What a great name for a game, honestly. Bad Maps. Some kind of piratical treasure hunting programming chaos apparently, but I want it just for the name.

Quinns: Hobby World has announced a follow-up to Spyfall, the social deduction game that could be summarised as “What if everyone in a James Bond movie had just taken methadone?”

The next game in the series, Spycon, sounds like it’ll be a much more less anxiety-inducing word game, and quite familiar if you’ve played Decrypto or CrossTalk. Players will be divided into teams, and players must cagily convey to their team which costume card they were dealt. The catch is, the other team are listening to the clues you give and are able to guess first. The /other/ catch is that your team is dealt a private keyword that you can use in your clue-giving.

Ava: I really don’t understand this.

Quinns: OK. Imagine you’re dressed as Blackbeard, and you and your team have the secret keyword “Ladder”. You might say “He used this to get to work”.

Quinns: You still don’t understand, do you.

Ava: No. But the game won’t come out until next year, so we have about six months for you to teach me. And I am pretty tempted by a team-based version of Spyfall that might not give me a panic attack if I play more than three games in a row.

Now, tell me again what a word is? 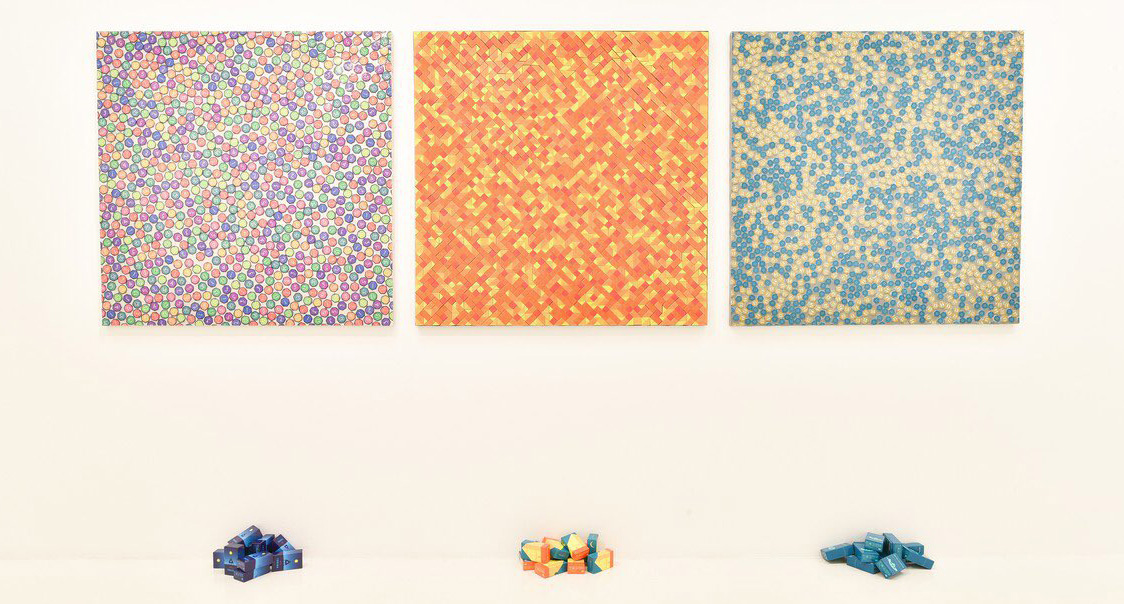 Ava: Itten Games continues to report back from Is this a Game #2, the unusual art and games gallery show in Tokyo. Here’s some more highlights.

First off, Oink Games have dismantled a load of their games and made a series of patterned pictures out of them. It’s definitely not playable, and they’ve called it Corpse. Similarly reconstructive, Ryuta Yumada has players making aerial domino displays in Space Domino 2019.

Nilgiri’s One Year Game asks players to come up with points scoring challenges to exchange with another person, asking them to catch up one year later and see how well they’ve done. And __’s chair by Osamu Hakamada, has players taking a seat high above the gallery, and turns the whole room into a game, a different one depending on which chair you’re playing in: 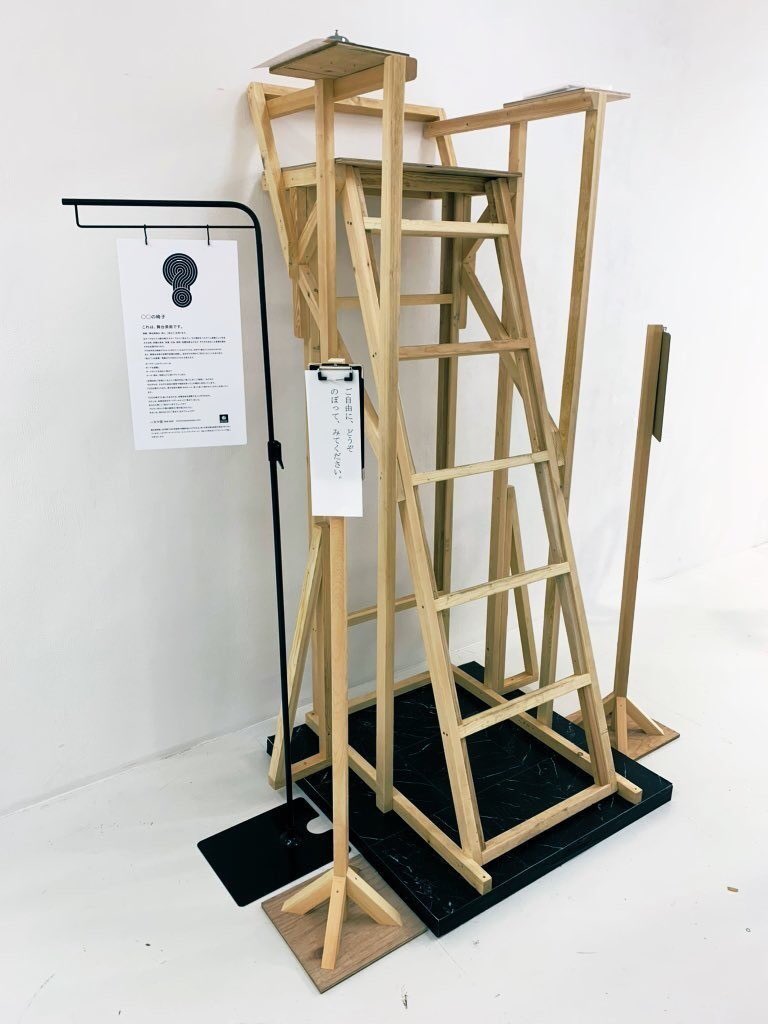 That last one reminds me of the time I got a very weird gig DJing from a balcony in a museum, and spending a long time trying to get museum visitors to dance around a random collection of 20th century furniture from a high vantage point was definitely an unusual experience. I love art and games and balaconies for giving us new perspectives, and this show appears to have done just that. Well done to everybody involved.

Ava: Here’s a little oddity picked up from the BoardGameGeek news blog.

Ludocherry is a new set up offering boardgame themed, 50s inspired outfits. Using game component themed prints, and 50s style dress and shirt patterns, this looks like a slightly more upmarket way to dress as your hobby than the classic ‘t-shirt with a pun on it’. Maybe it’ll catch on.

Quinns: Hey, these are nice! I really like that Meeple Garden shirt.

I don’t trust myself to say anything more than that when it comes to fashion, but I will say the word “Nice” again, for effect.

Ava: Nice. *grumbles under breath about not being the only one phoning it in*

Happy solstice everybody! And any other celebrations, holidays or breaks you might be having in the darkest days of the year. I recommend food, friends, fires and boardgames.

Quinns: Just be careful how you combine them. 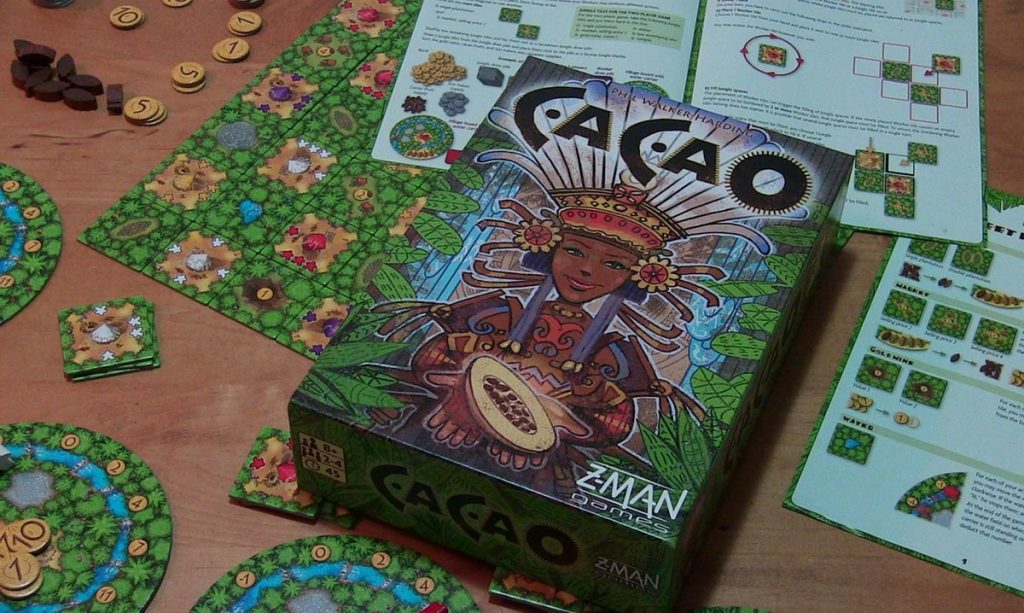