Now Leigh, that’s an impressive resume, but don’t worry if you can’t keep up with the salsa-like tempo of the Games News.

Leigh: Thanks, Quinns. I’m really looking forward to this unique and challenging opportunity and I hope to learn a lot as well as have a great time doing it.

Leigh: A positive attitude is the first step to a successful career.

Quinns: Fantastic. Let’s keep that mindset as we move forward in this space.

See that game up there? It’s called Die Dolmengötter. It’s a German release from 2005 where druids do strategic battle with no luck involved. This week, a new edition has appeared on German crowdfunding site Spiele-Offensive.de titled “Dolmen”.

Leigh: Wow. Okay, uh. I wasn’t really prepared for the German language competency element of this position, but I did read a lot of weird fantasy novels in high school involving druids doing things at each other. Usually it was sex.

Quinns: Is that what we can expect from Dolmen? It says here that it’s a game of foresight and area control.

Leigh: But you said “no luck.”

Quinns: Is that a sex joke?

Leigh: Yeah. Well, I mean, kind of. Okay, no, I guess it’s not working. Sorry, I’m terrible at this, it’s only my first day, with the jokes and stuff. Anyway. Druids.

Quinns: THERE’S NO TIME, LEIGH, WE HAVE TO KEEP MOVING. FEEL THE RHYTHM OF THE NEWS-SALSA

Quinns: Temporum is a new design from Donald X. Vaccarino, who is not, in fact, an X-Man, but rather the mind that invented Dominion and Kingdom Builder.

Quinns: Temporum already stands out from Vaccarino’s work by theme alone. It’s a time travel game, you see. Imagine a world where “the Egyptians discover America!” or “The Renaissance produces a plutocracy!” teases the publisher description.

Quinns: The same description also has the following double take-inducing line: “You will tamper with history as much as is needed, stepping on however many butterflies it takes, to get a perfect world under your own benign rule.” Holy shit!

Leigh: Wow, that sounds intense. How does it work? Is there a lot of dice-rolling? I don’t like that part, the dice-rolling. A lot of these games promise me I’m going to “tamper with history” and crush the butterflies of time, but then I end up rolling a lot of dice.

Quinns: Well, this is the joy of the board game news. We just don’t know! Oh, wait, I found a thing: “You draw cards, play some of them for money and abilities, and score some of them to advance your power through history. Having more power in a time period gives you abilities, but your goal is to have all of your power in the last time period, the time from which you come.” That sounds exciting, Leigh!

Leigh: Um, yes. Totally, I am passionate about time periods and their associated abilities. Also, what time is lunch around here?

Quinns: THE SALSA, LEIGH, TAKE MY HAND, FEEL THE NEWS IN YOUr body

Leigh: I don’t think it’s legal for you to touch me

Quinns: Dungeon Fighter is basically a cross between D&D and darts. You and your friends all go into a dungeon together and attack monsters by rolling dice onto a huge cardboard target. Making them stop on the sodding thing (let alone in the middle) is harder than it sounds, and only gets harder. I have a fond memory at Board Game Geek Con last year of getting a magical sword that resulted in Mike trying to roll a die out of my hand, while I had my eyes closed.

Fantasy Flight announced this week that it’ll be publishing the Fire At Will and The Big Wave expansions, which are almost upon us! And they’ll add… fire! And… waves!

Leigh: This sort of looks like one of those banner ads for free MMOs I see on my free anime streaming websites. I mean, on someone else’s free anime streaming websites, as I would never use office resources for such things. Using dice as darts does sound hazardous, though. There’s always someone throwing, and throwing is a pretty bad thing to do with your time. I think I might sit this one out.

Quinns: That’s not the worst idea. We had fun when we played it, but it’s bizarre mix of a really entertaining physical game and a traditional dungeon crawler with all these statistics and decisions of when to drink our potions. Like, rather than being a game that could appeal to gamers OR people who wanted to have a laugh, it’s designed for players who exist in that strip of the venn diagram where both of these markets cross over.

Leigh: “Gamers” do not like to laugh. Got it. scribbles on notepad 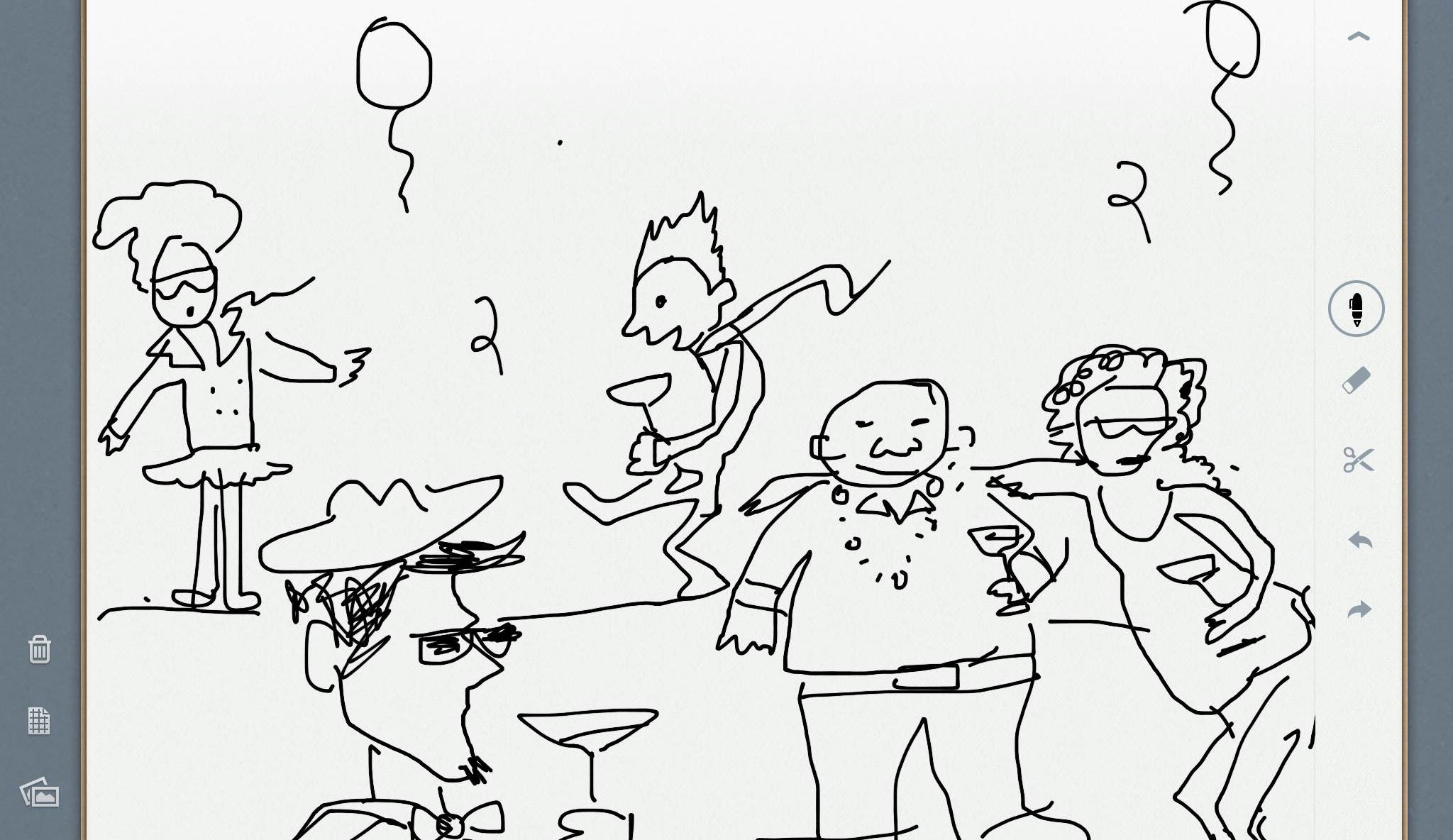 Quinns: Leigh what is this.

Leigh: Oh, it’s Intel! A new announcement from Ludicreations that’ll be on Kickstarter soon. “A game of spycraft, intrigue, betrayal, and bluffing set in the golden age of the cold war, when men knew how to drink a Martini… Spies must infiltrate the embassy during the reception that the ambassador holds every year to show how important he is. Moving from room to room, they have to recover files and escape in the helicopter, or make sure that the other side’s pilots have a really bad day.” There aren’t any pictures, though.

Quinns: So you drew this.

Leigh: Yes, sir. This is my qualified artist’s rendition of what cool spies who know how to drink martinis look like when they’re partying. I go to a lot of these. But not too many of these, because I’m still a reliable professional who absolutely doesn’t have a cool martini problem.

Quinns: Speaking as a professional, do you think Intel will be good or really bad?

Leigh: It really depends on how much vermouth is involved in the martinis, I think. I mean. I like spying, a lot. Not that I am spying right now or anything. Certainly I’m one of those players for whom theme is important, and if I have to say things like “Star Frigate” or “Orc Destroyer” out loud, I’m going to be much less interested than if I get to say “Ambassador’s Ball” or “Secret Files.” So. I think it will be really good. 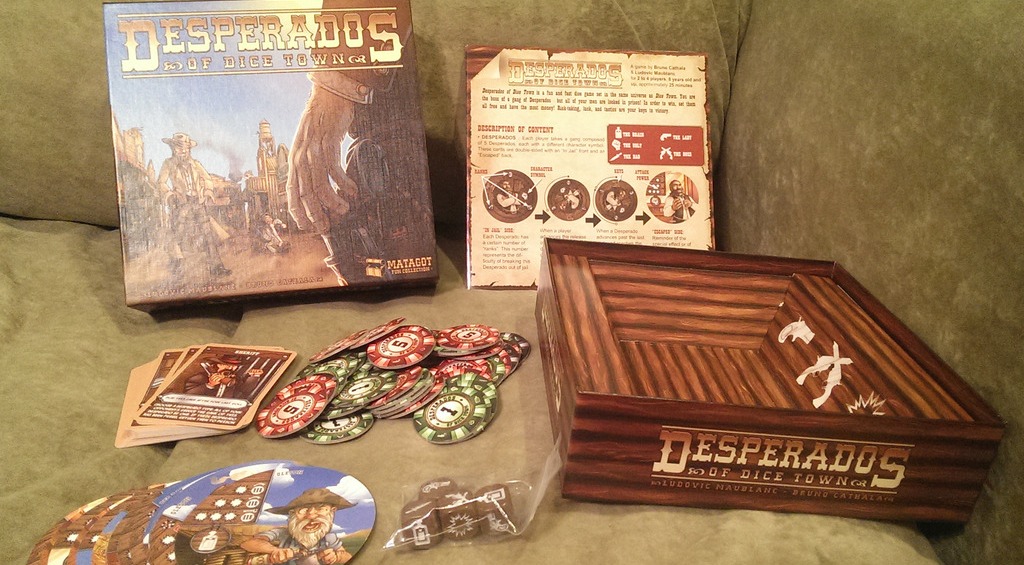 Quinns: AND FINALLY (we always say ‘and finally’ Leigh, write that down), Desperados of Dice Town is 2014 release from Matagot that might be good. I want to say it’s set in the same “universe” as 2009 title Dice Town, but then I envision a Wild West ruled by huge plastics cubes that soar across the sky, crushing men whole.

Quinns: I never played Dice Town, though it looked pretty interesting to me. Players rolled dice to try and form poker hands, which they would use to take over buildings to get different bonuses. Owning the Gold Mine would let you collect gold nuggets, for example. The Sheriff could decide who wins ties, which really meant they could collect bribes from all the other players. And apparently the imaginatively titled expansion “Dice Town Extension” makes it even better.

Desperados of Dice Town, though, sounds like it just wants to run that no-good game of Yahtzee out of town.

Leigh: Yahtzee. Right. I sure do like to Yahtzee. I’m Yahtzee-certified. I promise. That’s that one with the cup, right?

Quinns: Not if Desperados of Dice Town gets to it first, Leigh. Then there will be no cup. Just a… a cup with a bullet hole in it, round the back of y’all olde saloon.

Leigh: Whoa. It really is a pleasure to be on board here and experience the cutting edge of cupless innovation. I’m learning so much.

Quinns: Did you feel the salsa? 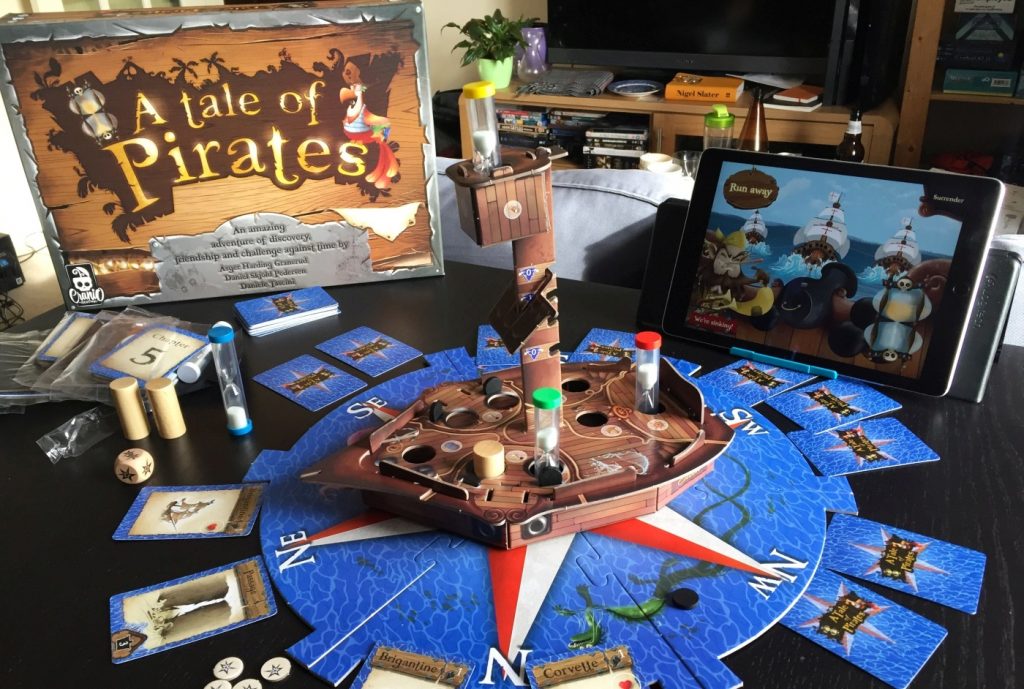 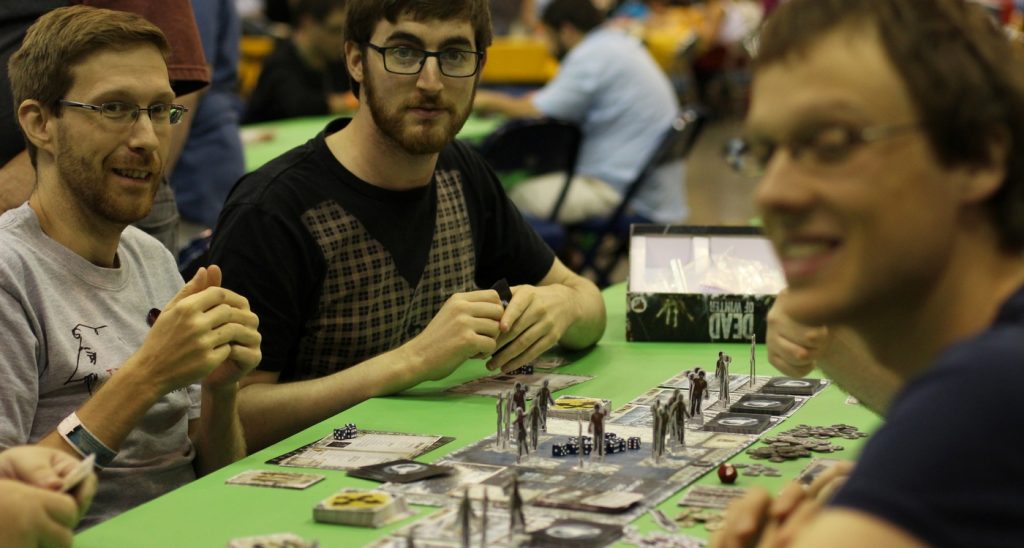