Ava: Don’t dilly dally, SHUX may be over, but the news waits for nobody.

While the team are hopping on planes, I’m hopping on the news-train, and running straight to the dining car, hoping to pull up a cloche on some tasty news-morsels and snap up some crunchy news-nuggets. I’m not sure where we’re going, but I know that I’m hungry, and a big fan of locomotion. 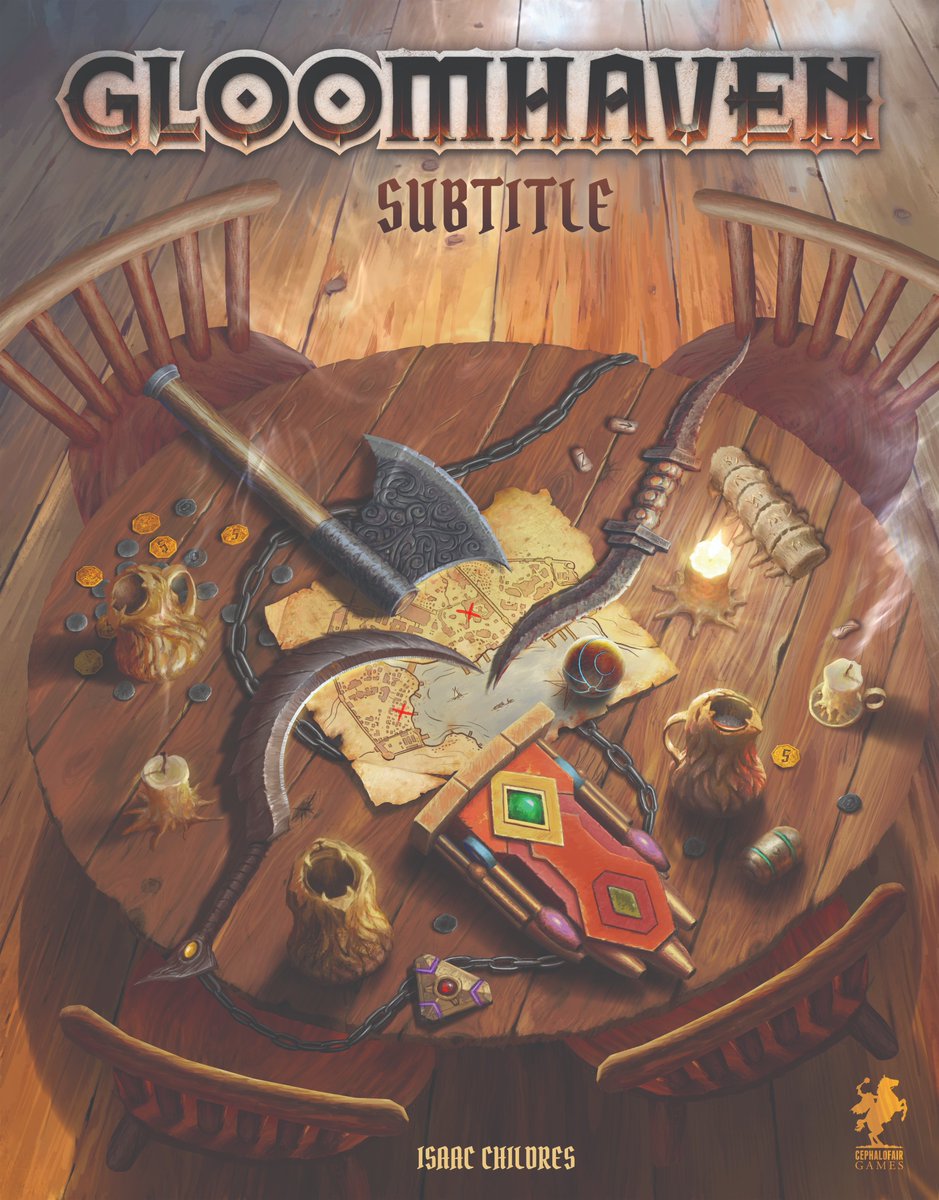 No. Wait. I’ve got something wrong…

Provisionally operating under the name Gloomhaven: Subtitle, Isaac is promising a stripped down, all barriers barred, normal-priced version of enormous mega-hit Gloomhaven. Taking the mammoth campaign based co-operative dungeon crawler and stripping it down to 24 scenarios, four characters, and a 40 to 50 dollar price point.

I’m really excited about this. I’ve been left off this hype train by my difficulty in getting a consistent group together that I don’t immediately derail into D&D. I think i could tempt some people with Gloomhaven, but I’m not willing to bet a ton on it. Maybe this starter pack will be the thing that snags me. 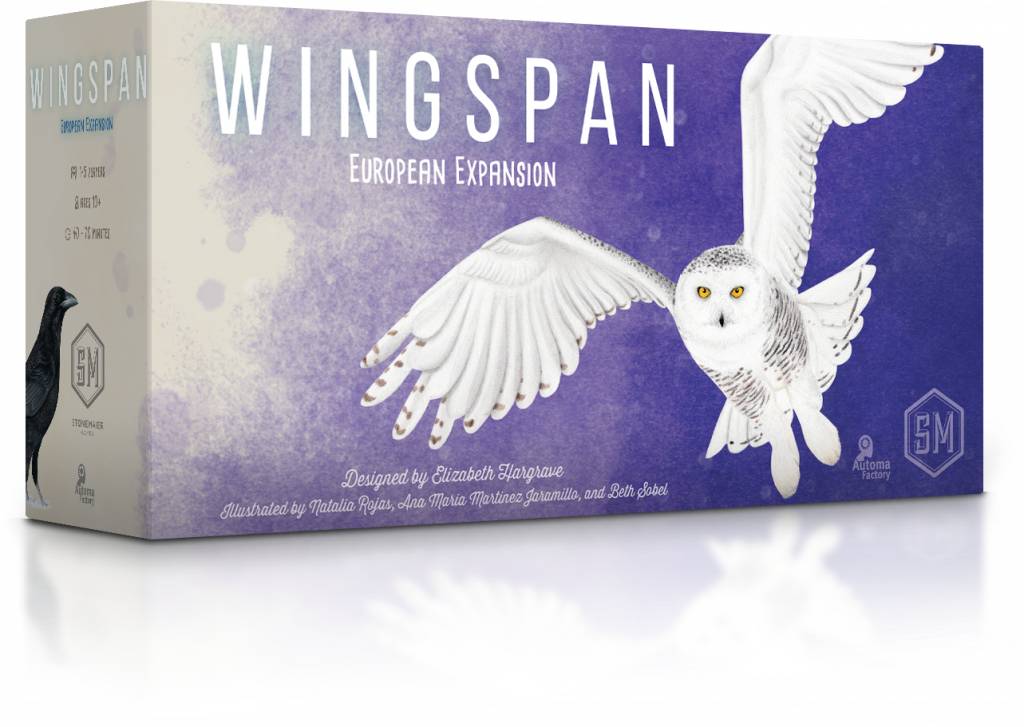 The European expansion will bring 81 birds from across Europe for you to shuffle into your already oversized deck of pretty winged things. Wait. That sounds like it’s asking you to shuffle live birds into your deck. Please don’t do this. Buy the expansion, and use the cards provided. Stop trying to shuffle birds, Millicent!

The new cards will include new mechanics, including end of round bonuses, which I’m mostly excited about because they’re a lovely teal colour. it’s definitely a ‘you liked the game so here’s a little bit more’-style expansion. I’m still hoping for a reboot that will give the game the over-powered ridiculousnesses of Glory to Rome, but I might be missing the point of this accessible accessory. More of the same is a pretty safe bet with such a successful game

I’m worried that the game being full of birds I’ve already heard of might take some of the charm out of enthusiastically announcing the name of every flutterer that comes into play like an ornithological town crier.

What am I even saying? They’re birds! Every one is a perfect creature! Even the hyper-aggressive seagull that used to hang outside the window of The Great Eastern kitchen because the old chef gave it a sausage a day. IT WAS ENORMOUS. 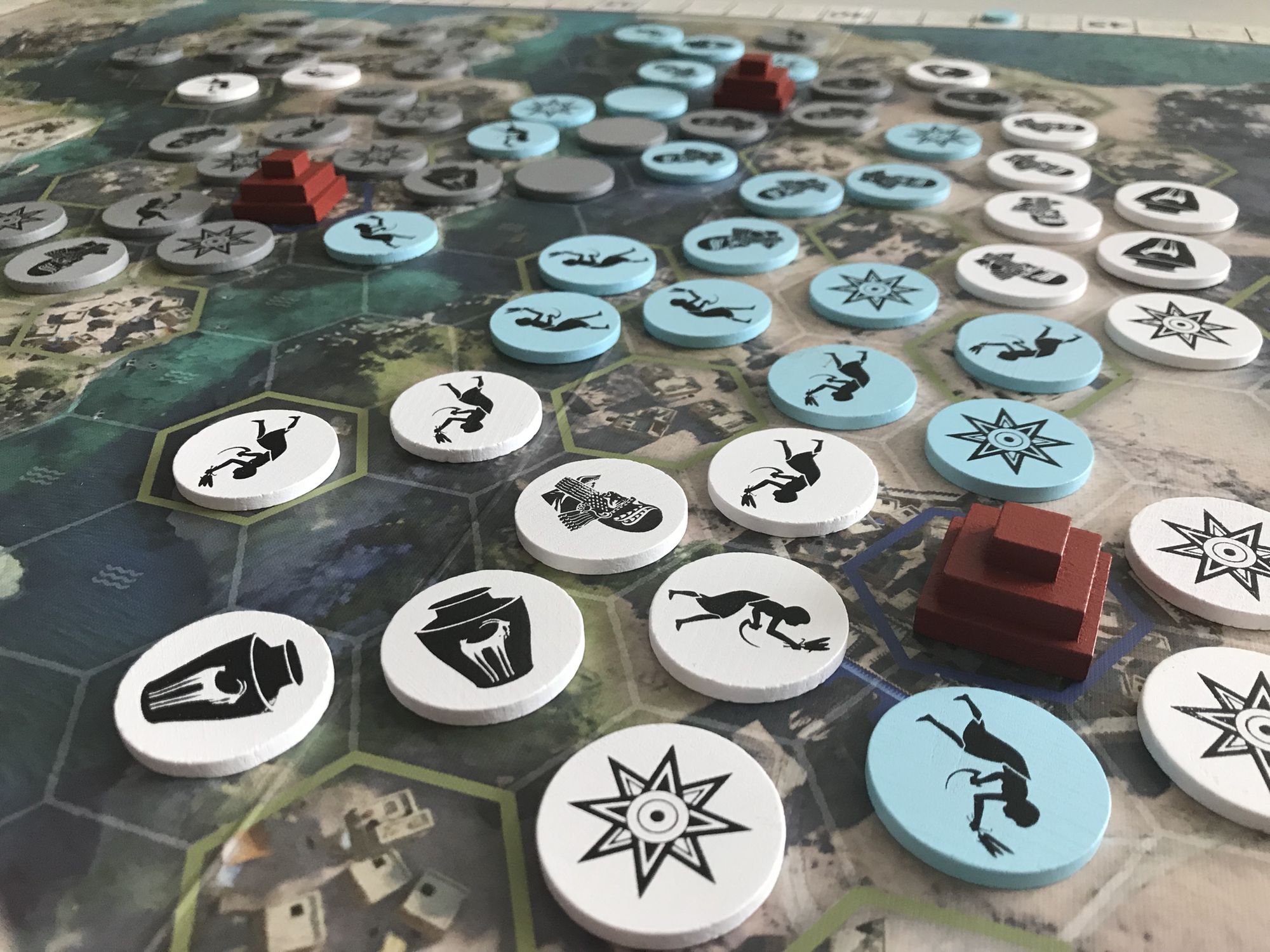 The good doctor has eleven games hitting wide release at Essen Spiel this year, and ploughing the pre-classical furrow once more is Babylonia. It reads to me like a successor to Tigris and Euphrates, although W Eric Martin is comparing it to Samurai, Through the Desert and Taj Mahal. Whether it’s useful to make these comparisons or not, it’s always exciting to hear Knizia’s best games get name-checked.

In Babylonia, you’ll fill a hexagonal map of middling-pots-amia with symbolic discs to build trade routes, wrap around ziggurats, connect cities and do something with farmers. There’s points to gather in lots of different ways, so presumably a lot of tricky decisions about what to focus on, and how to out reach your opponents.

I’ll be waiting to hear people enthuse about it directly, as Knizia is not quite as consistent as he is prolific. Unpicking what works from previews like these isn’t that easy, as the magic is often hidden a layer or two deep. I’m curious though. How could I not be? He’s got a bowtie and some of his games are PERFECT. 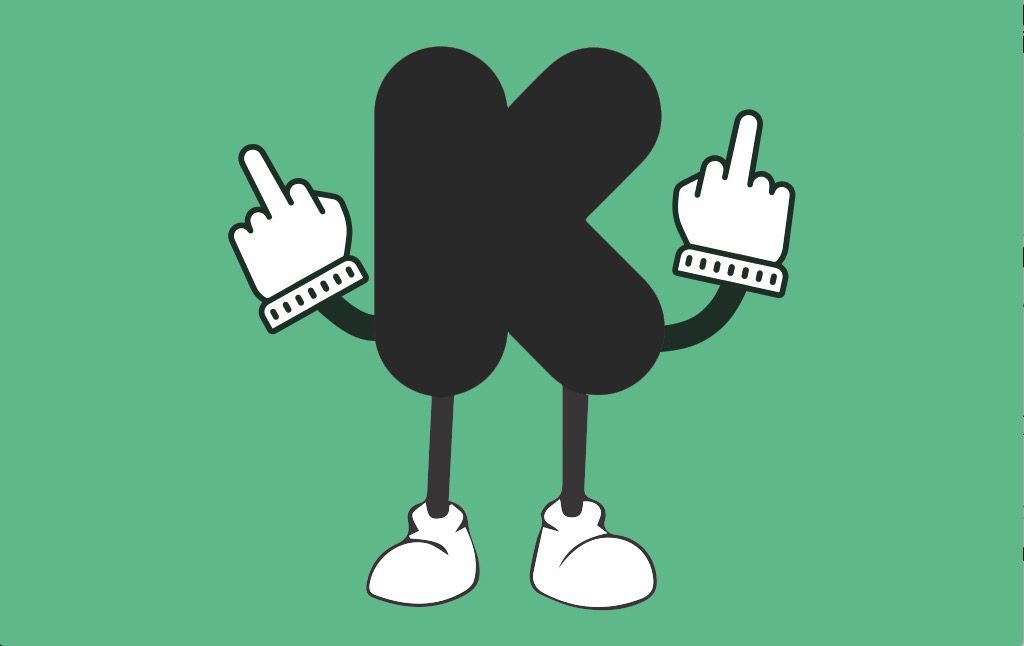 It’s time to bang that drum again, but for the first time since the Kickstarter union-busting debacle began, I feel like I can tell people something positive to do, rather than just wring my hands.

Kickstarter United has issued a call out to supporters to contact Kickstarter management and ask them to officially recognise their union. This is a huge step, and an opportunity for Kickstarter to stop being awful that I really hope they’ll take up. Send messages of support via twitter, [email protected] or any other means that feels appropriate. If we can convince Kickstarter to voluntarily recognise the union, it’s a huge victory for the rights of their workers and the platform itself. Show your passion, show your support, show your solidarity!

With that sign of hope, and with Kickstarter United still not calling for a boycott, I feel slightly more okay linking to Kickstarter projects. I still want to make sure we aren’t unduly damaging creators that happen to be on the platform during the dispute. 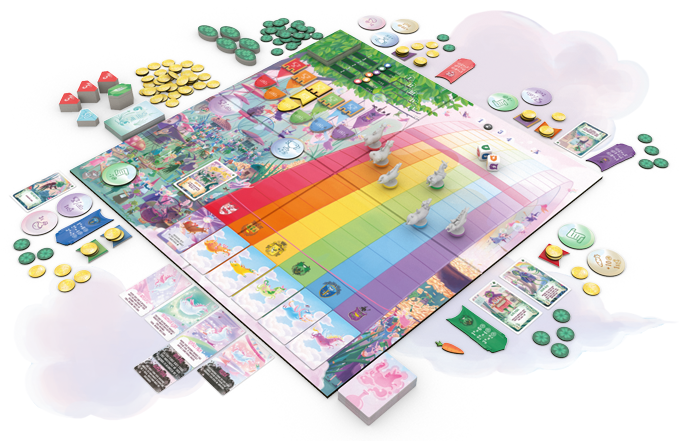 The tactical turf-accounting rainbow racer sees several unicorns vying for first place, while you bet, rig and magic your way to victory. The unicorns are adorable, and the publisher has been on a bit of a spree lately, with Railroad Ink, Potion Explosion and Dragon Castle all scratching different itches very emphatically. Hopefully this’ll add another brightly coloured horsehair to their bow. (Wrong sort of bow, I know, but sometimes I like being tenuous more than I like being funny). 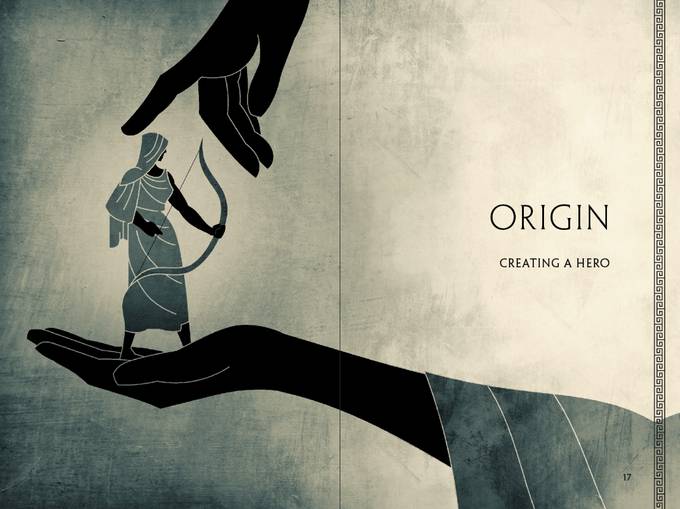 Also pretty exciting is the re-release of one of John Harper’s old projects, Agon. This role-playing game by the designer of grubby sneak-em-up Blades in the Dark will transport you to the world of classical myths and ask you to beat up legendary monsters. I can’t tell if there’s specific rules for all the animals Zeus will disguise himself as to get laid, but we can only hope.

I always associate the original Agon with theories about the different types of play from ancient message boards and blog posts about role-playing games I had never played. Agon is Greek for struggle or contest, and so this game and that word always represented people who played games to win, which always struck me as an odd approach for storytelling games. Maybe it’s the right vibe for bouncing from island and island in a series of trials and challenges. I’ve heard only good things and my RPG theorising is at least fifteen years out of date, so I doubt it’s relevant! 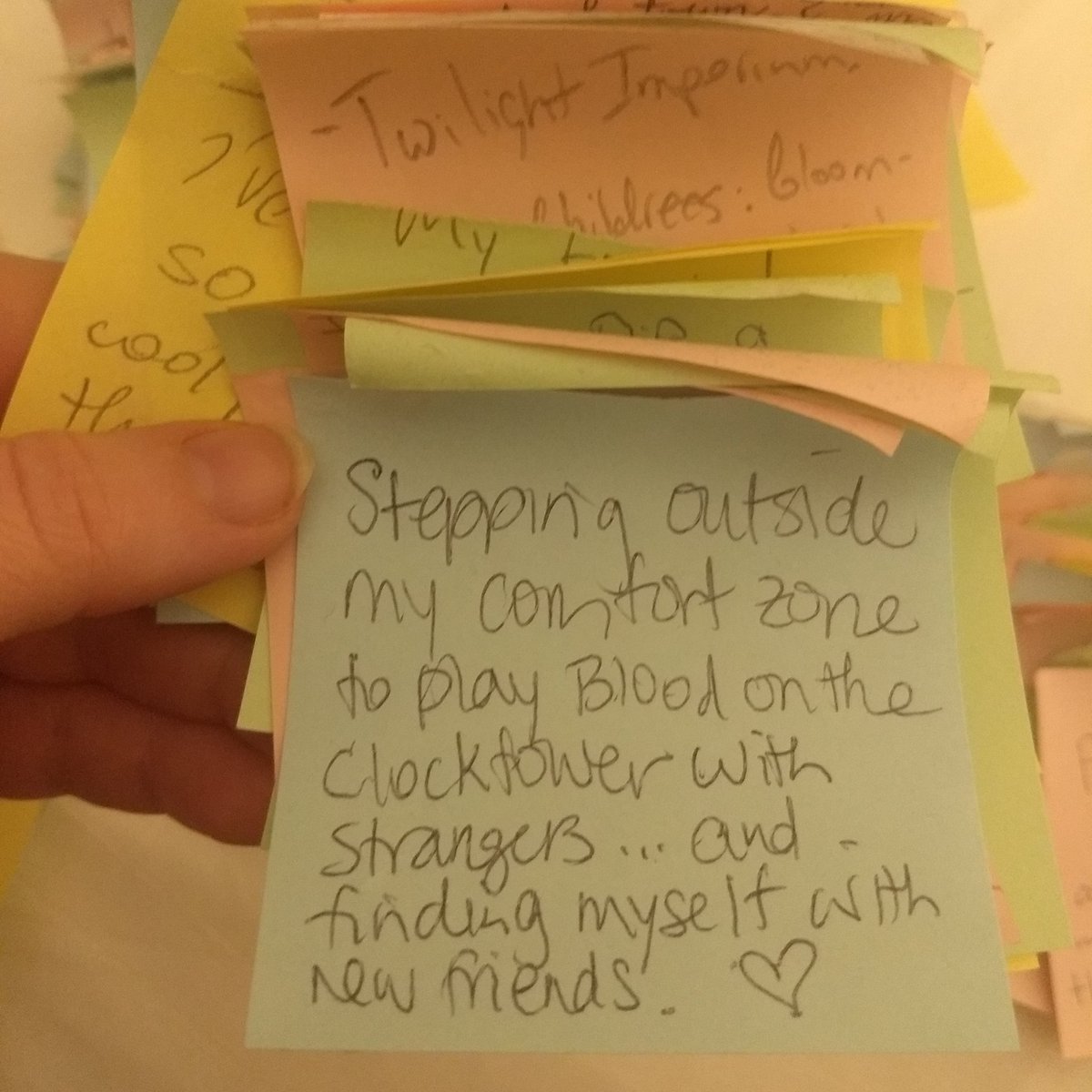 Honestly, the last bit of news I want to share isn’t really even news. For anyone who made it to SHUX, or anyone who missed it, I think the most heartwarming (and possibly jealousy inspiring) way to spend the next five minutes is looking through the #SHUX2019 hashtag on twitter.

You’ll see a lot of lovely words, happy photos, and what looks like a wonderful event. One highlight is Pip going through the feedback post-it notes, and finding someone celebrating their successful marriage proposal (congratulations, whoever that is). For me the most heart-swelling bit was Querdcast pointing out that it was a joyful place for trans folk. I remember that specific feeling from Nine Worlds Geekfest, where I used to help run a games lounge with a few of the SU&SD forum moderators. I’m super glad that SHUX has the same supportive vibe.

Thanks to everyone involved and attending for making a magical happening. I’m sorry I couldn’t make it! (But at least not making it means I can be this congratulatory about it without making it seem self indulgent!) 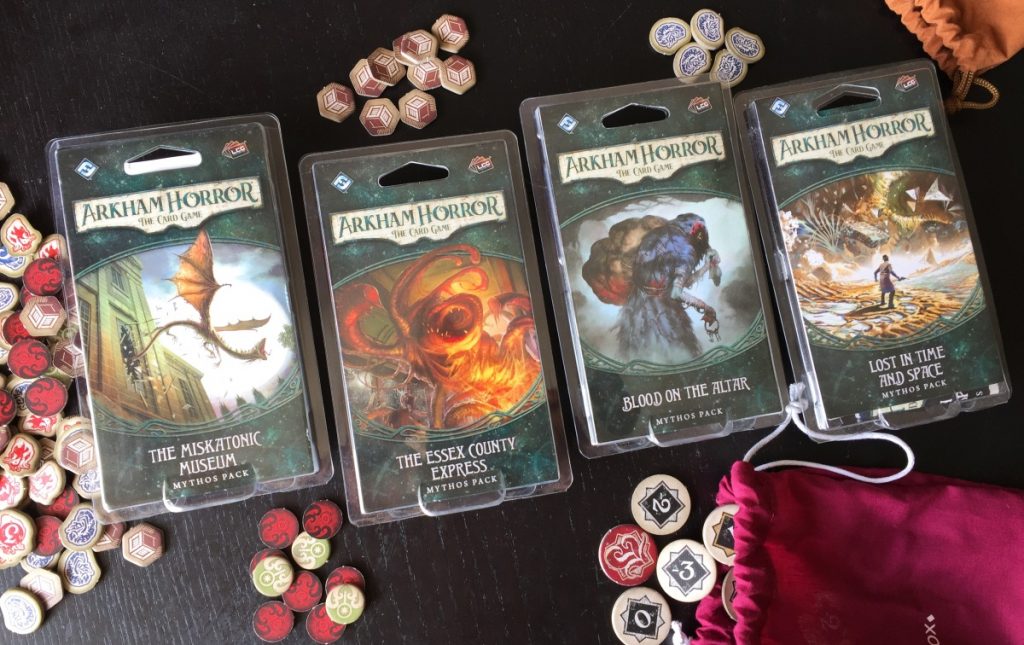 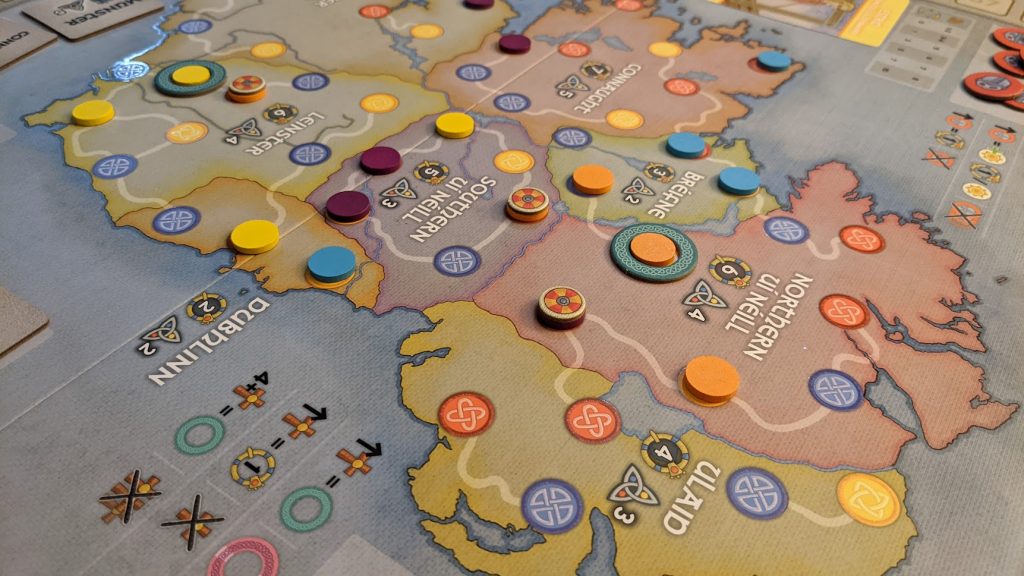