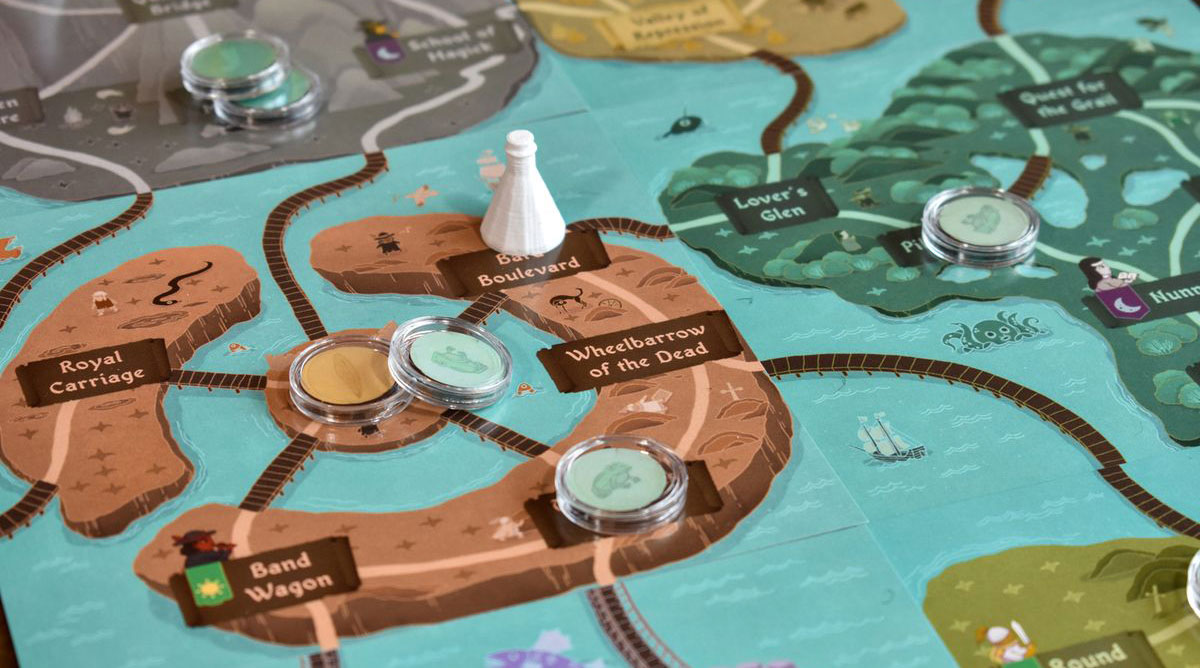 Ava: I don’t think you’re ready, for this jelly.

Tom: I don’t think i can handle this.

Ava: Yeah, sure, you can call it that if you want!

The Pearple’s Choice is currently open for nominations in the unofficial, but still lovely, Shut Up & Sit Down forums. I’m really glad I’ve got an obvious excuse to highlight the forum and hopefully take more of a dip in myself. These are some wonderful awards voted for by the loveliest community in gamesing.

I’m glad to see the return of “The Erik Tengblad award for a game that you played this year but came out earlier”, if just because it reminds me of the lovely and horrible licorice pepper sweets Erik used to feed me annually. I got a bit tearful seeing the MinuteWalt award for best socially distanced game. I’m also super curious what people will vote for in the pillbox award for the game you’re most excited to play when you can get enough people in your house.

It’s nomination time until 14 December, after which voting will run to 11 January with the winners announced in the new year. I’m personally particularly excited to get to take part in the online vote and (hopefully) chat, but then maybe get to appear in the podcast and have additional opinions.

Honestly though, I think it’s really lovely that there’s this entirely volunteer run award show running in the background. So many thanks to everybody running it, nominating, voting and generally sharing their passion for games.

Tom: In further ‘cool awards’ news, a jam-packed board of industry vets have banded together to create ‘The Zenobia Award’ – a game design contest that’s laser-focused on bringing designers from marginalised groups into the historical games space with a cash prize, but perhaps more importantly, a mentorship from the design heavyweights behind it.

Perhaps the most important thing is that it’s not an award where everyone applies and then one person wins and it’s over. Promising applicants are selected and paired with a mentor early on, who will then develop ideas in collaboration before a de facto ‘winner’ is chosen some time in 2021. I’m really excited to see who gets brought on, and what ends up being produced as the cogs of design turn.

Ava: I think historical gaming is one of the places that could really do with better representation and different perspectives, so I’m really excited to see what comes of this. I love historical games for shining lights on periods I could never have gotten interested in any other way, but it’s no secret that the perspectives offered are often through narrow lenses. Anything that gives me a chance to dive into a piece of history from an entirely new angle sounds wonderful to me. I’m going to be keeping a close eye on what comes out of this mentoring process. 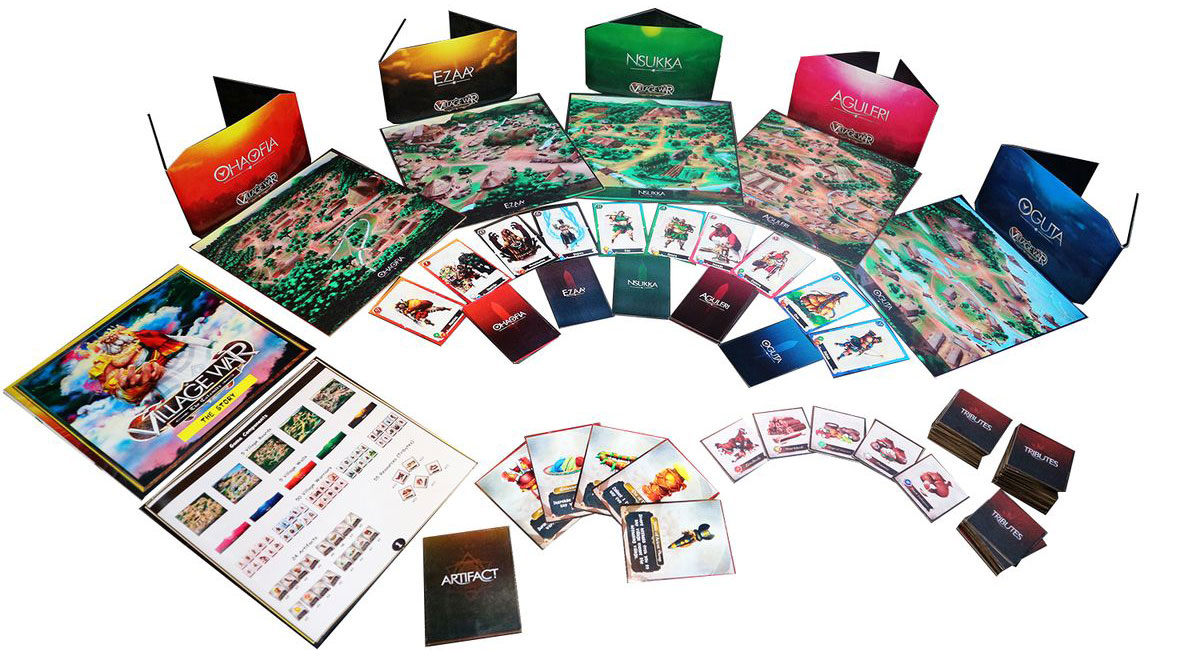 Village War: The Calamity is a Nigerian boardgame about the history and mythology of the Igbo, designed by Kenechukwu Ogbuagu. The art looks striking, and its boardgamegeek description pitches it as a card-drafting, resource management spirit war game (I am so up for spirit war being the new hot genre).

Players will be choosing from an initial hand of ten cards which warriors will be going to their village to be targeted by your opponents, and which will be staying in hand to get aggressive. Cards are played back and forth to defend and attack, until someone has won the war and/or claimed the most resources. Players are also able to use artifacts and tributes to disrupt the back and forth and take special actions.

Tom: There’s quite a lot of war going all over the place in that cover art! I hope the game delivers in-depth systems for every one of the natural disasters, creatures and buff dudes depicted. 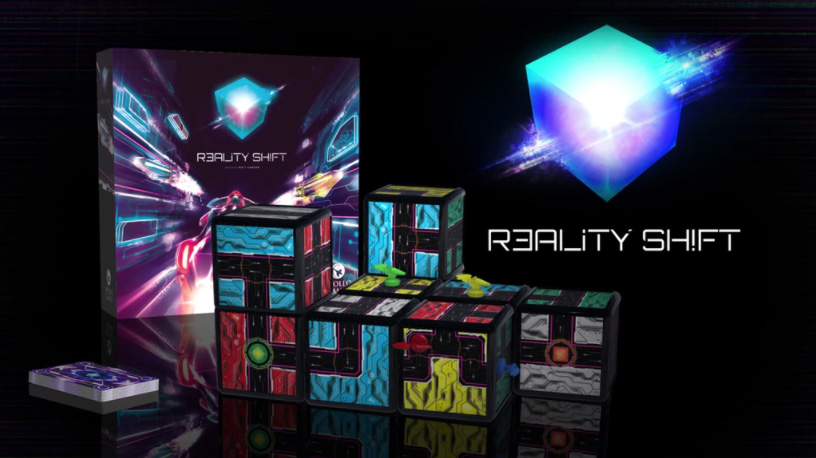 Ava: Well this looks thoroughly bizarre, and completely unlike the usual historic fare I associate with Academy games.

Reality Shift features sci-fi style lazer-cycle maze-racing across a board made up of chunky magnetic plastic cubes that can be reoriented and moved around during the game. This means you’ll be racing on the sides of cubes, getting squashed by cubes and reconfiguring the race course to bring the finish cube closer. It looks ridiculous. And very cubey.

Tom: The higher Kickstarter pledge levels here are just multiple (occasionally deluxe) copies of the game, so that you can build an 18-cube Reality Shift race-track that extends into the heart of the sun. Which y’know. Might… be… fun?

This looks a tiny bit like ‘Ctrl’ – partly because they’ve both got big ol’ cubes, but mostly because they’re both built out of gimmick and potential. The only way I can envisage Reality Shift practically working in most people’s human rooms would be to seat it atop a turntable so the whole thing could actually be visible. Add that to some bog standard roll-and-move with card powers to extend your reach, and it could just be a big magnetic crapshoot.

That said, Academy Games have a history of making solid and interesting dice-chuckers, so maybe it’ll be okay. 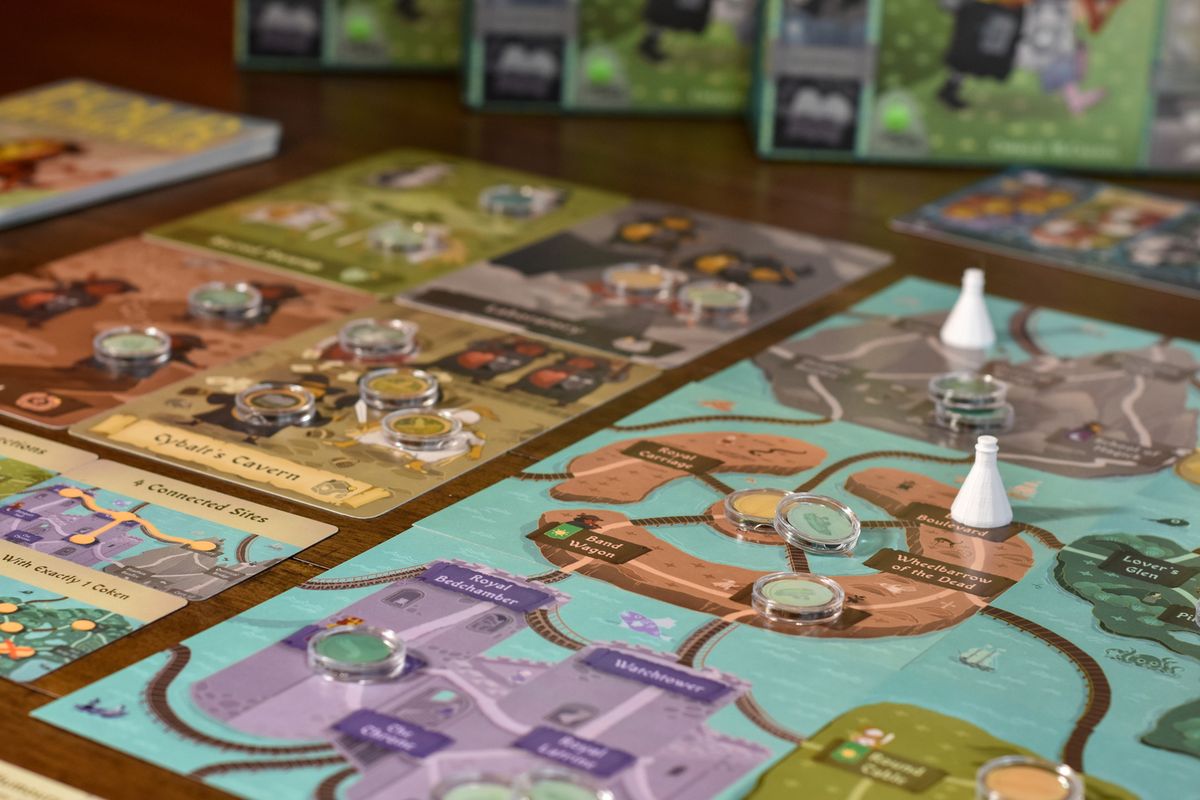 Ava: Social deduction medieval alchemical biology? Sure, why not.

Four Humours is a game of unseen information and hopefully working together or outwitting your opponents by placing the right pieces in the right places.

Players are medieval pharmacists, prescribing potions to various characters on cards associated with particular locations on a map. Each person has a range of slots to fill with the humours of your choice, so you secretly place potions in them. There’s a hierarchy of humours dictating who wins with which combos, made up of the pieces placed by you AND your opponents. Each card is a different take on the Prisoner’s Dilemma, played over and again, in an attempt to race to meet specific objectives.

It’s one of those things that could be nice and fluffy or ruthlessly complicated, and I honestly can’t tell which from this angle.

Tom: I adore the art style for this one, and it does do a lot of work in making the game look fluffy and gentle – but I bet it’s a tiny bit brutal? It’s the kind of game I can imagine Matt being really good at in a way that makes me want to not talk to him ever again afterwards? I’ve got a lot of time for ‘Routes on a Map’ games and the collision between that and cold hard distrust has me right intrigued.

Ava: And finally, in what I’m thinking of as the second movie in an odd-couple buddy road trip series, Quinns has guested on a Dice Tower top ten! If you want an hour and a half of him gently ribbing (and being ribbed by) Zee and Tom of that parish, you’ve got a treat in store. They’ll be picking out their top 10 unique games, which means it’s actually like a top thirty of uniquingest games?

Given the surprising loveliness of the AwSHUX session where Quinns and Tom beasted each over about the games they disagreed on the most, I’m expecting this to be an enjoyable watch.